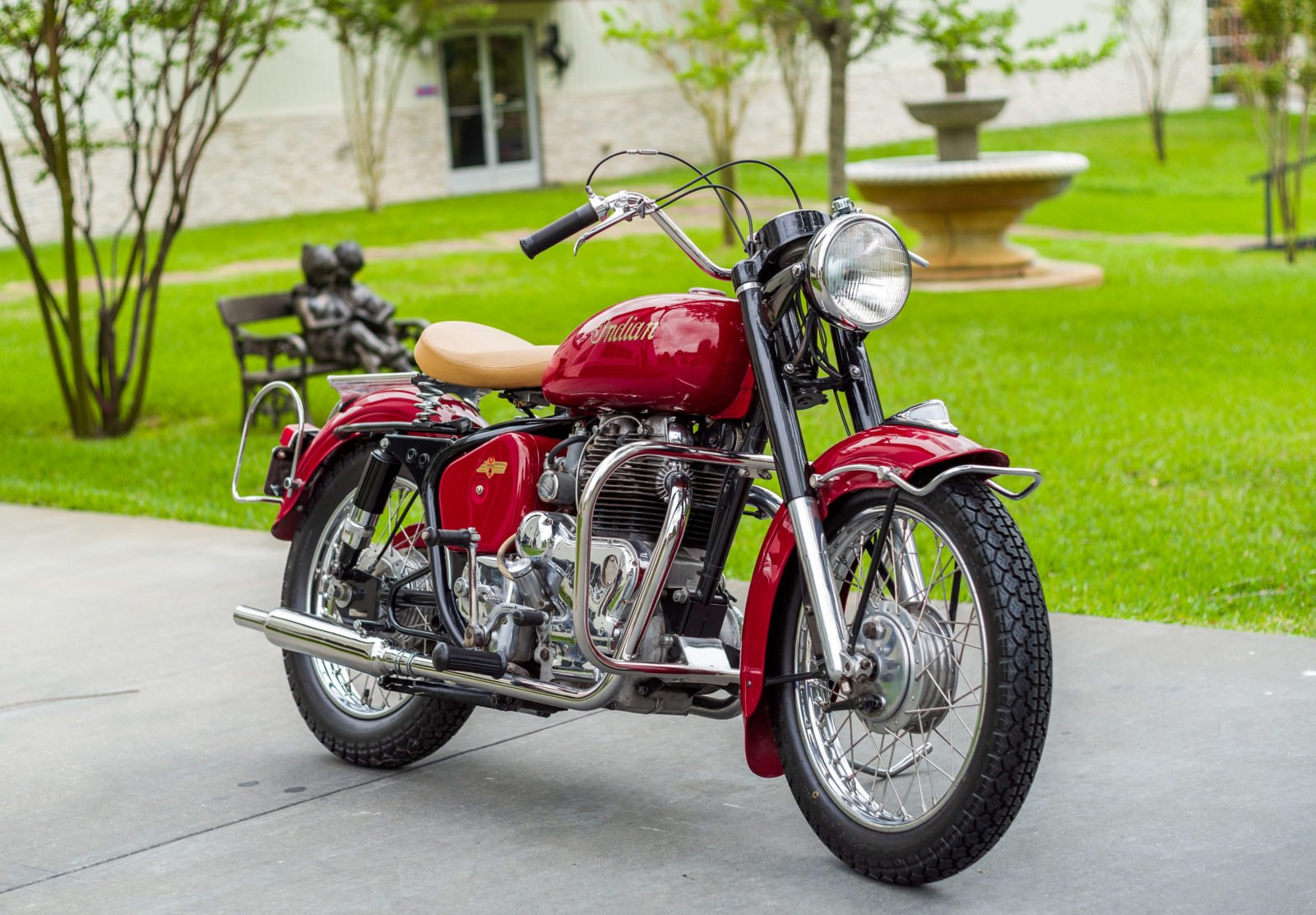 This is an original Indian Trailblazer from 1957, it’s essentially a badge-engineered Royal Enfield Super Meteor powered by a 700cc parallel twin and it’s capable of 100 mph – an impressive speed for the era.

The reason for this cross-atlantic partnership between a British and American motorcycle manufacturer was that Indian had gone bust in 1953 and had been acquired by English company Brockhouse Engineering.

The Demise Of Indian (And Its Resurrection)

The once mighty Indian Motocycle Company hit hard times in the years after WWII. The model range had been cut back to just the Indian Chief, which was too expensive for most. 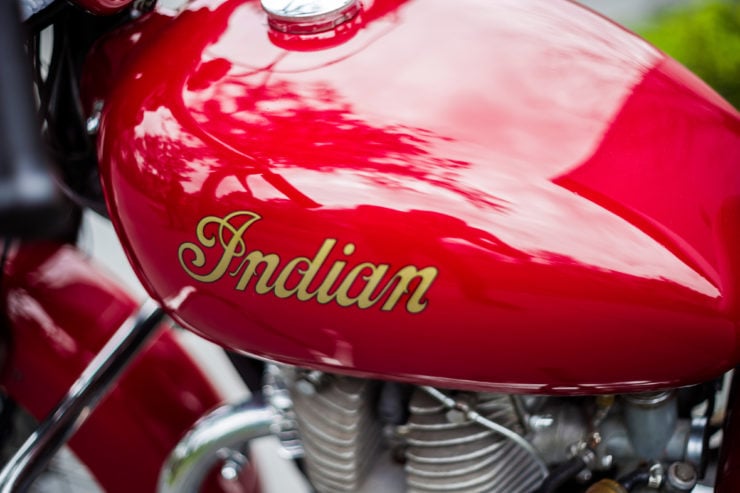 The Indian Trailblazer is a great examples of badge-engineering, as it’s essentially a lightly modified Royal Enfield Super Meteor.

In order to address this the company imported and imported and sold two small capacity Czech CZ motorcycle models as well as the Corgi Scooter, a civilian version of the Welbike motorcycle that had been developed for British paratroopers during WWII.

Unfortunately by the time Indian released their own smaller capacity motorcycles in 1949, the 220cc 149 Indian Arrow and the twin-cylinder 440cc 249 Indian Scout the company was already on shaky financial footing, and the slew of built-quality and reliability issues with the two new models all but ruined any chances of turning things around.

After Indian was liquidated in 1953 British company Brockhouse Engineering acquired the rights to the Indian name and began experimenting with some badge-engineering – importing and rebadging English motorcycles as Indians and selling them through the dealer network.

By 1955 they had set their primary focus on the motorcycles made by Royal Enfield, an agreement was in place, and the Indian Motocycle Company essentially sold Royal Enfield under their own name until 1960. 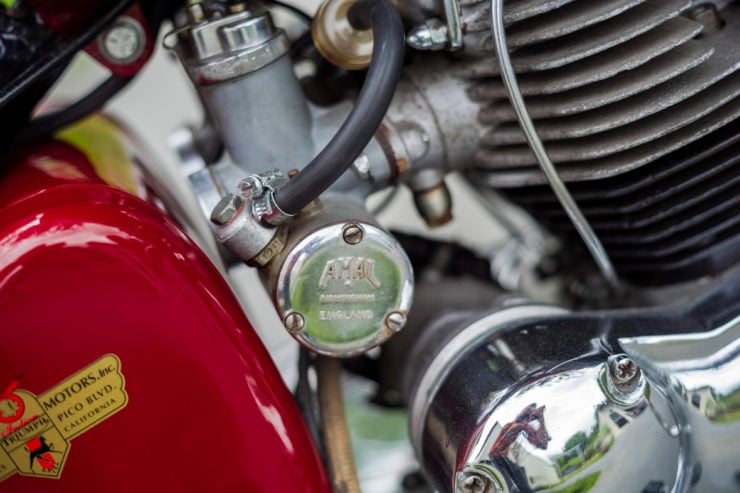 This strategy was enough to keep Indian afloat and in 1960 it was bought out by British company AMC who abruptly stopped almost all Royal Enfield models, as they were competing products with their own marques like Norton and Matchless.

The plans that AMC had for the Indian brand would never come to fruition due to the fact that AMC was facing financial difficulties themselves, and so they instead opted to focus on selling Norton and Matchless motorcycles in the USA.

The Indian brand would ultimately be bought and sold a number of times, with a few unsuccessful (or short-lived) attempts to relaunch the brand until it was bought by Polaris Industries in 2011. 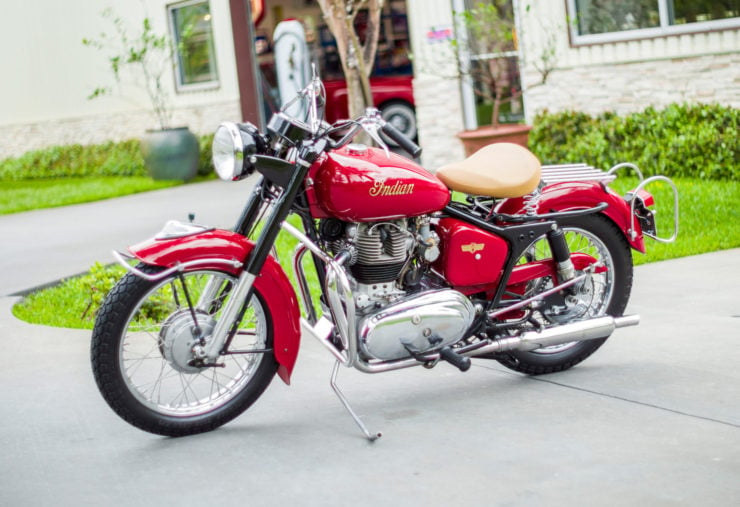 Some modifications were made to make the Super Meteor more “Indian” including the red paintwork of course, coupled with new fenders, higher handlebars, and a single saddle with a rear luggage rack.

Under Polaris ownership Indian have no introduced a number of all-new models including the Chief and Scout, and they’re giving their age-old rivals Harley-Davidson a run for their money once again.

As mentioned up top, this motorcycle is an Indian Trailblazer, it’s based on the Royal Enfield Super Meteor and it was intended as a cross-country touring motorcycle with optional saddlebags and a long-range 4.8 gallon (21.8 liter) fuel tank.

With it’s 700cc (actually 692cc) air-cooled parallel twin the Trailblazer was capable of somewhere in the region of 45 bhp, though final power output depended on which compression ratio pistons you were using.

Power is sent to the rear wheel via a closed chain primary and a traditional exposed chain final drive, and suspension consists of telescopic forks up front and twin shock absorbers in the rear.

Drum brakes front and back were standard for the 1950s, and this model is fitted with larger Indian-style fenders, all-red paintwork, and a crash bar across the front of the frame.

We don’t tend to see a lot of these Royal Enfield Indians come up for sale, many simply didn’t survive and those that have survived are rarely in condition as good as this. RM Sotheby’s estimate that it’ll sell for between $5,000 and $10,000 USD when it crosses the auction block later in September.

If you’d like to read more about it or register to bid you can visit the listing here.\

Editor’s Note: We received a message from a Royal Enfield expert telling us that the engine in this bike is incorrect for the model. As always, it’s imperative that any potential buyers take great care when researching and bidding. 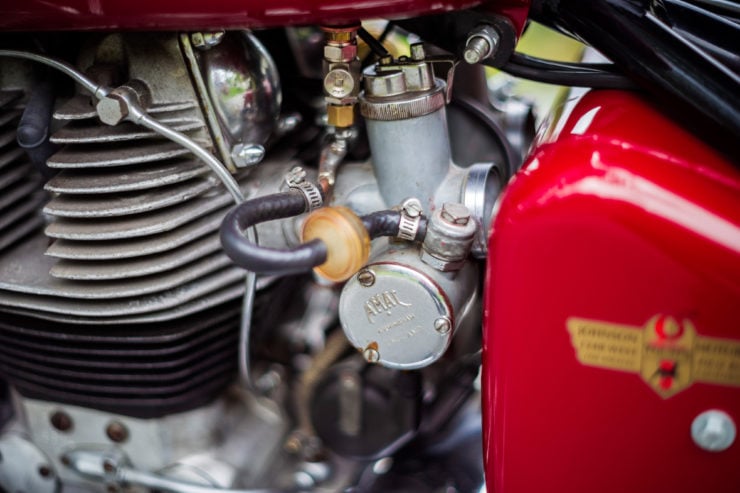 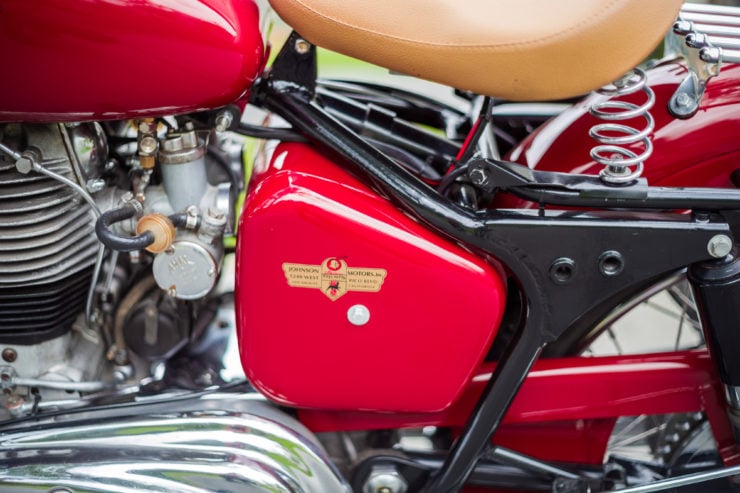 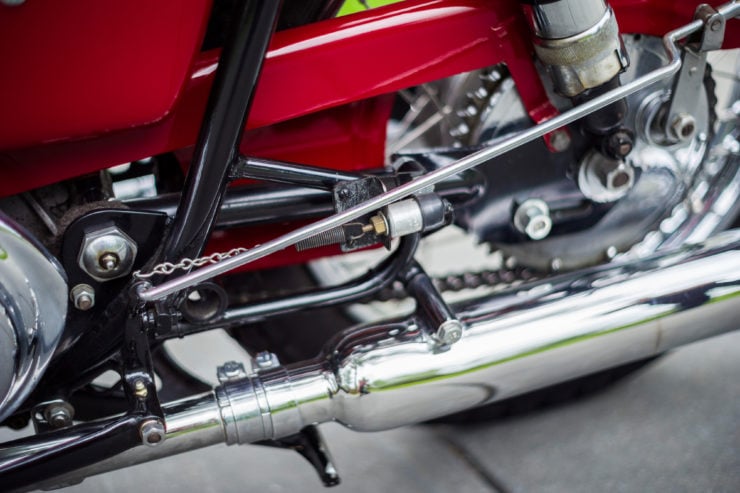 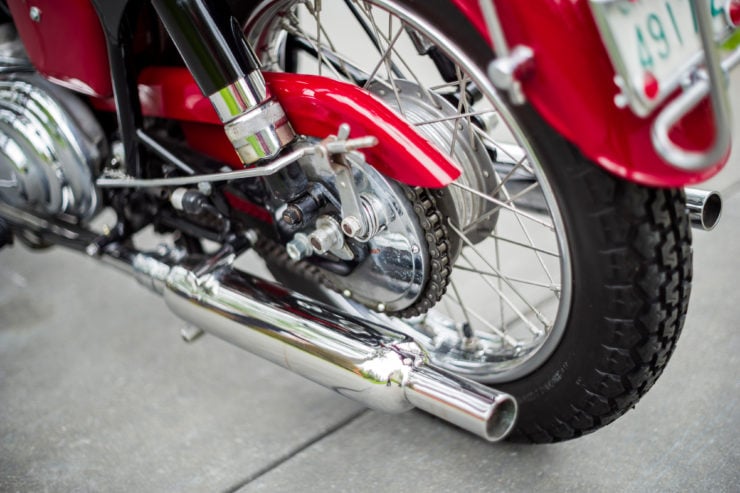 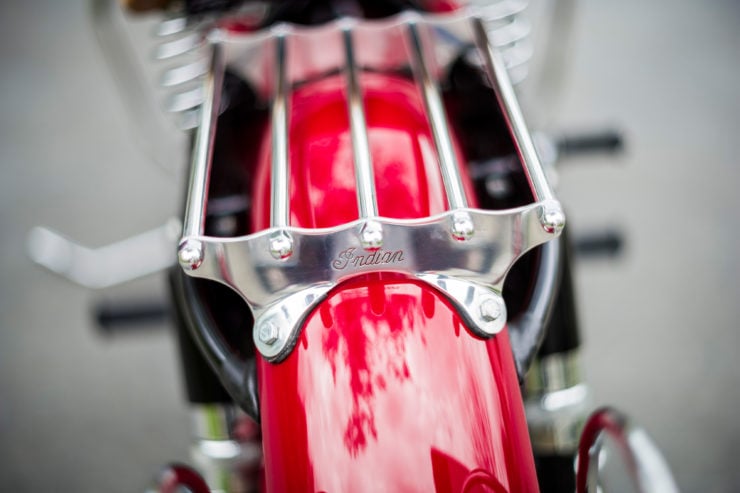 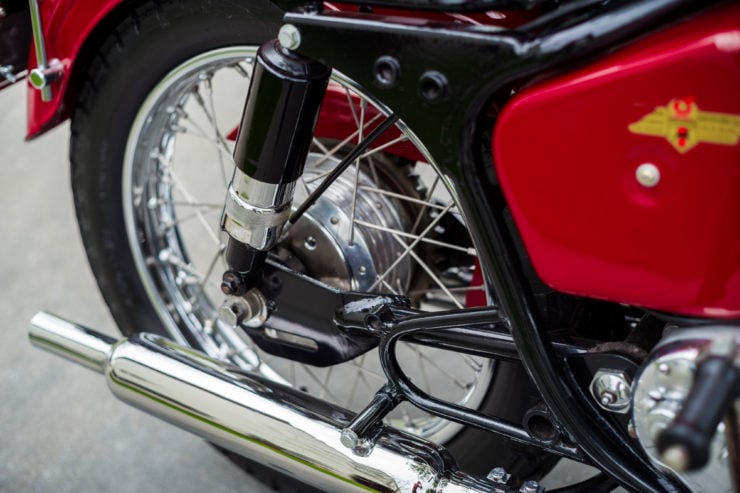 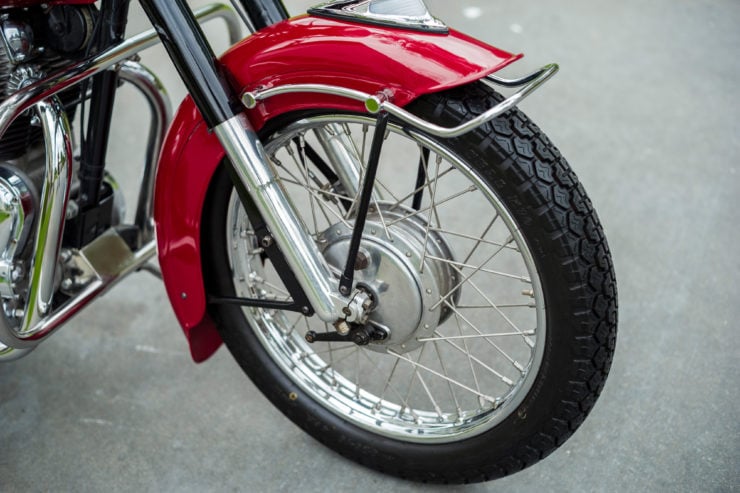 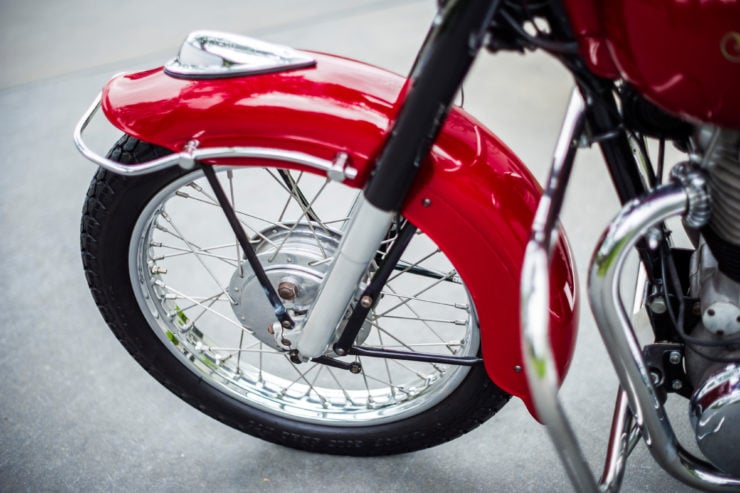 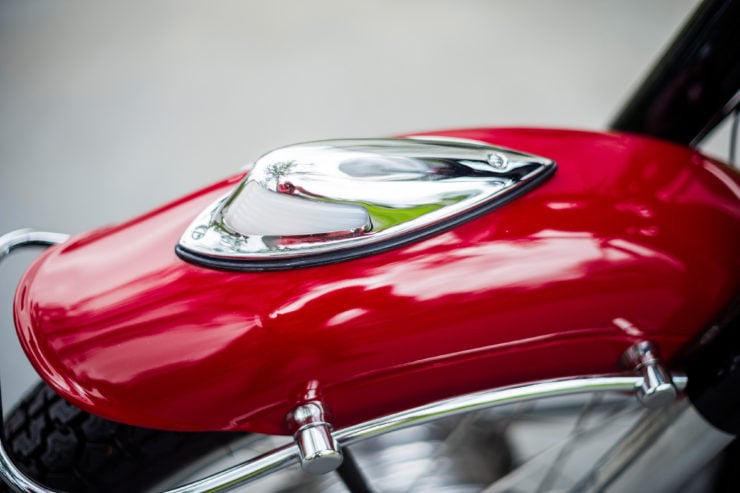 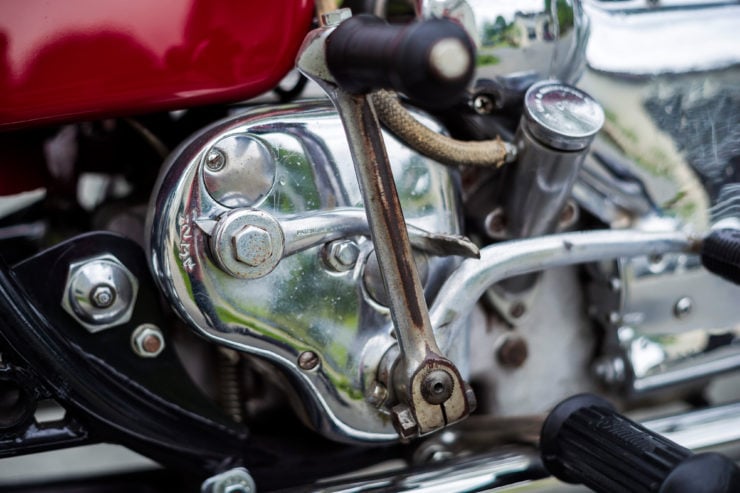 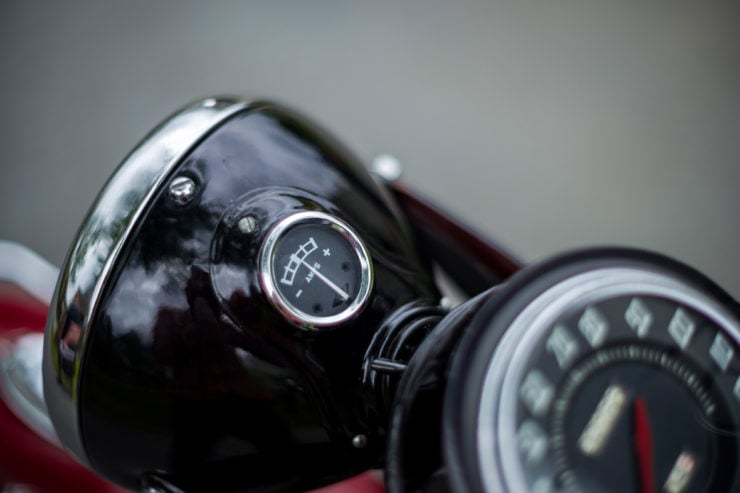 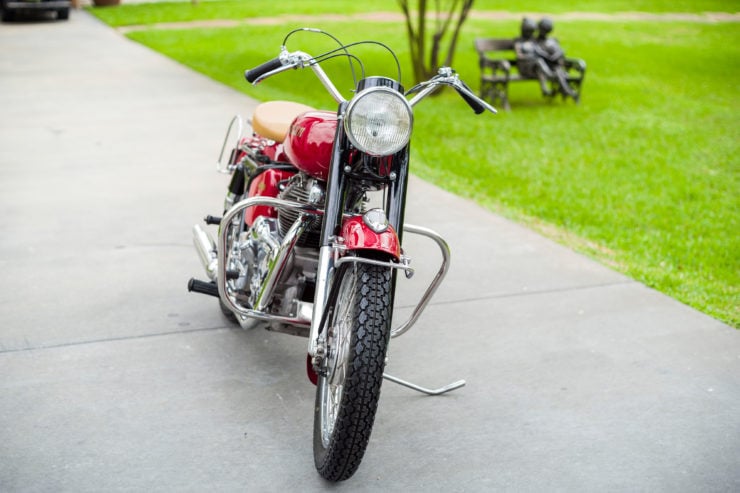 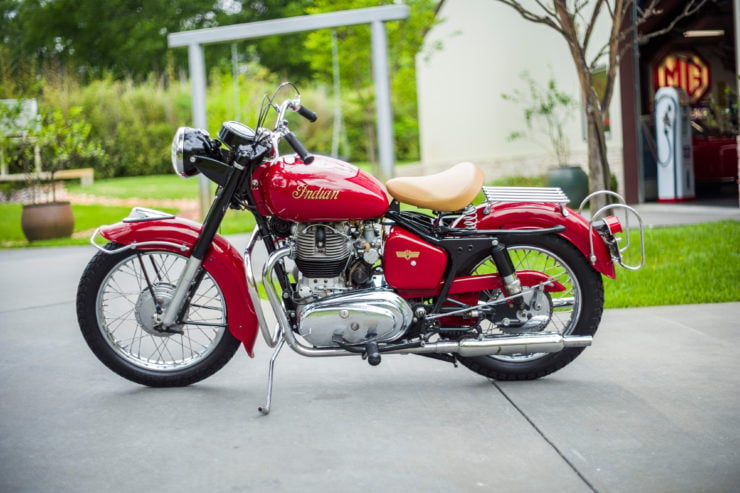