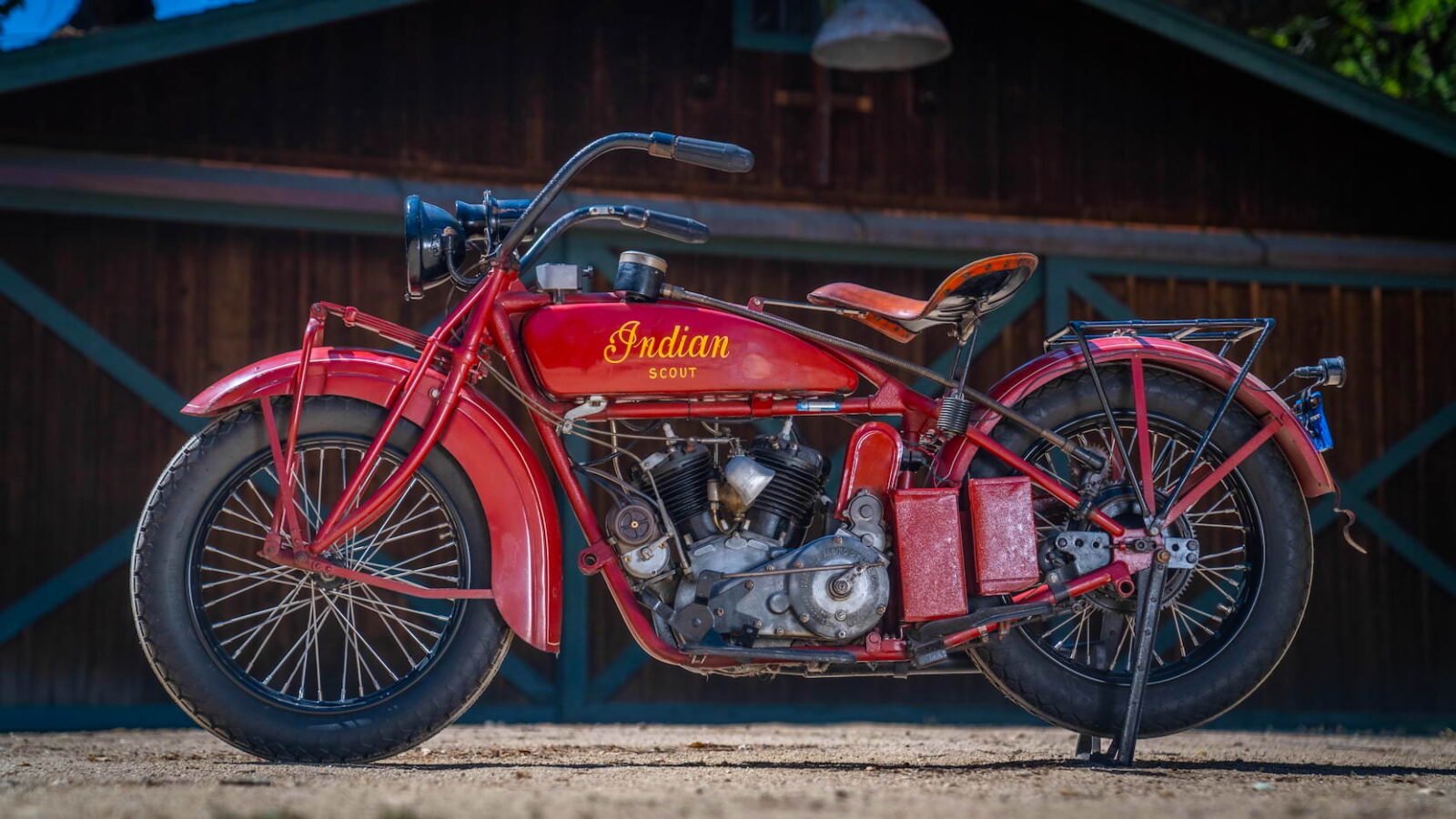 Despite the fact that the Indian Chief tends to get more adoration from the general motorcycle population, it was the Indian Scout that did much of the heavy lifting on the early race tracks of North America.

You might not know it to look at the Scout, like the one pictured here, but with a few well-considered modifications they were among the most competitive motorcycles in a variety of different motorcycle racing disciplines, from flat tracking, to hill climbing and even land speed record setting on the Bonneville salt flats. 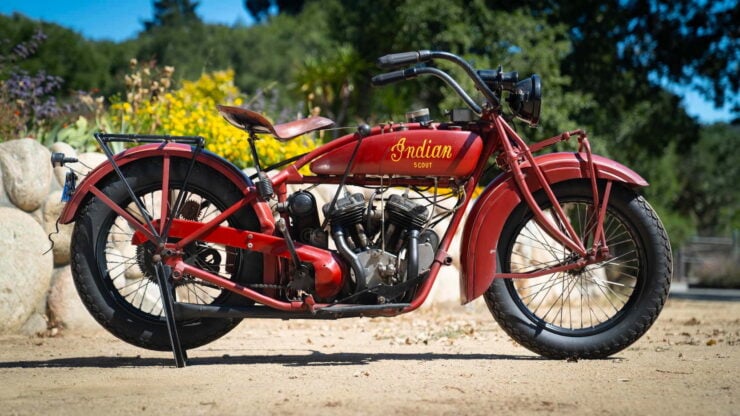 Increasing competition had led to this change, particularly from the likes of the Excelsior Super X, and a version of this new larger engine would be used in the bike that succeeded the 1927 Scout – the Indian Scout 101 of 1928 onwards.

The original Indian Scout of 1920 to 1927 is often overshadowed by its successor, the 101 Scout, due to the popularity of the 101 with everyone from racers to trick riders. But that first Scout model was one of the most important in the company’s history, it arrived before the Indian Chief was introduced (in 1922), and it was offered at an affordable price point that made it popular with vast swathes of Americans.

The styling of the first Scout was in keeping with the trends of the era, the fuel tank was positioned between the frame’s two top tubes, there was no rear suspension, and relatively simple trailing link suspension was used up front.

The concept of having front and rear brakes on a motorcycle wasn’t yet commonplace, so the Indian Scout had just a single rear drum. A single leather saddle was used, with springs underneath to help avoid too much tooth chattering on the oftentimes bumpy roads of early 20th century America.

Although we don’t often associate Indian Motorcycles with high-performance, it’s worth remembering that just nine years before the introduction of the Scout, the company had won the Senior Isle of Man TT in 1911  – in fact they took 1st, 2nd, and 3rd place to swept the podium. 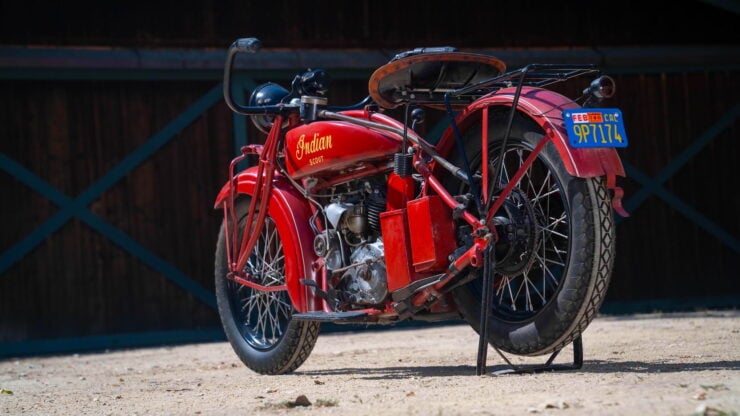 Above Image: As was common at the time, the Scout didn’t have rear suspension, it had a sprung saddle instead.

Indians were a common sight on the high speed boardtracks of the USA too, battling with names like Cyclone, Flying Merkel, and Harley-Davidson at speeds over 100 mph in front of crowds of tens of thousands of cheering fans.

The bike you see here is an original surviving 1927 Indian Scout, it was acquired the current owner’s father in 1977 from the Flying Lady in Morgan Hill, California, who traded a 1920 buckboard for it.

In the years since, the Scout has been kept as close to original as possible. No restoration has been attempted, some paint was touched up to ward off corrosion, the spokes were replaced (with NOS items), tires and chains have also been replaced where needed.

It’s being sold with a California title and it can be ridden on the road, two manuals are also included in sale. We don’t often see 1927 Scouts like this come up for sale, unlike the far more numerous 101 Scouts, so it’ll be interesting to see how much it sells for – Mecum are estimating that it’ll fetch between $30,000 – $35,000 USD.

If you’d like to read more about this bike or register to bid you can click here to visit the listing, it’s due to cross the block in mid-August. 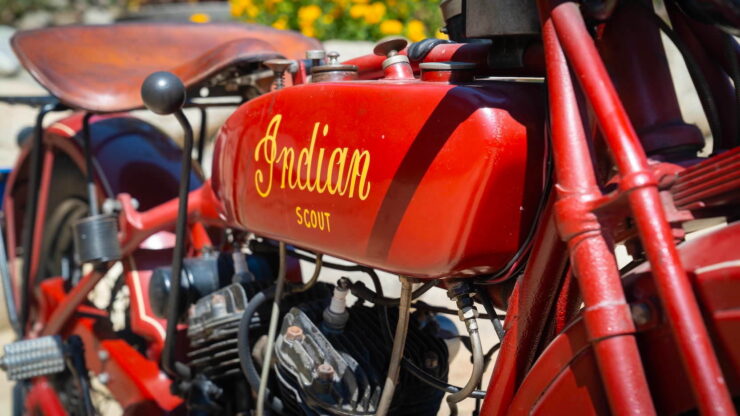 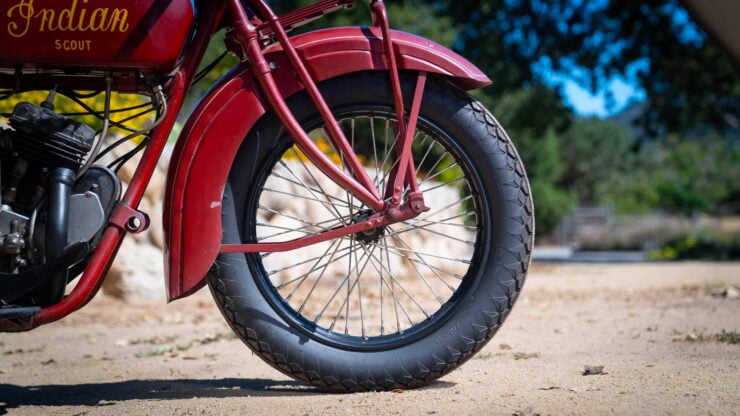 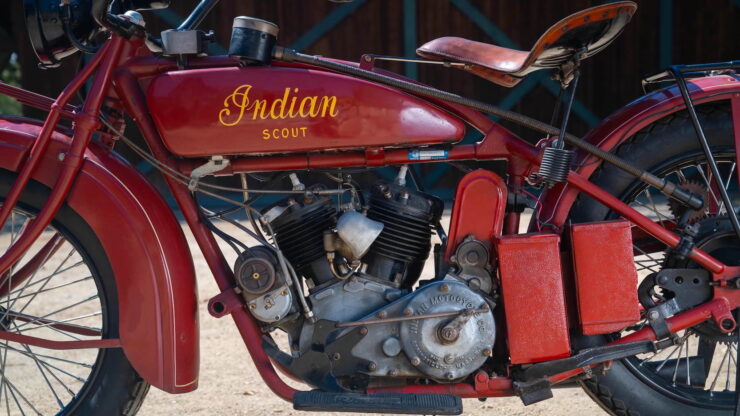 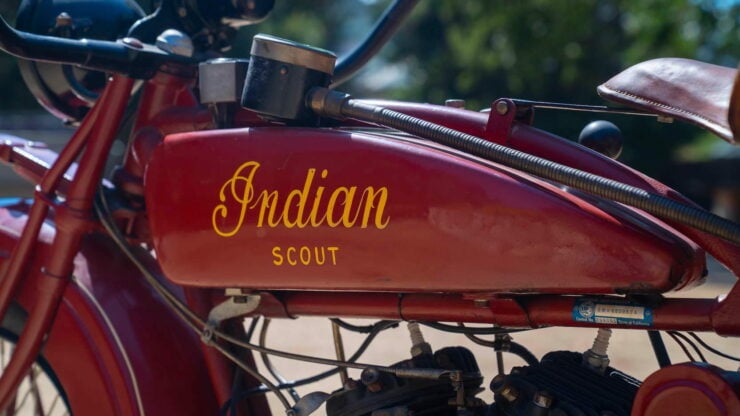 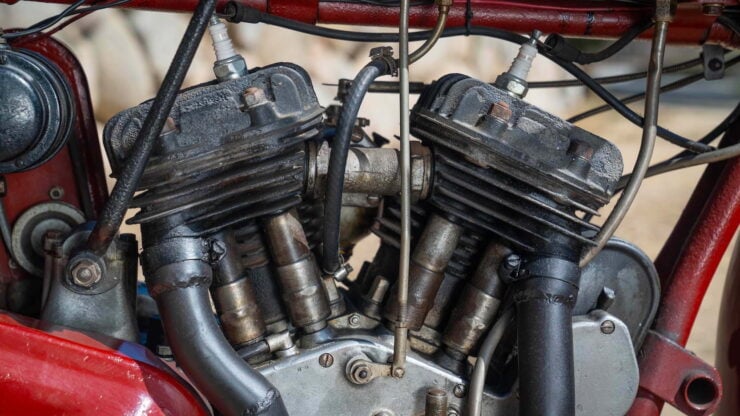 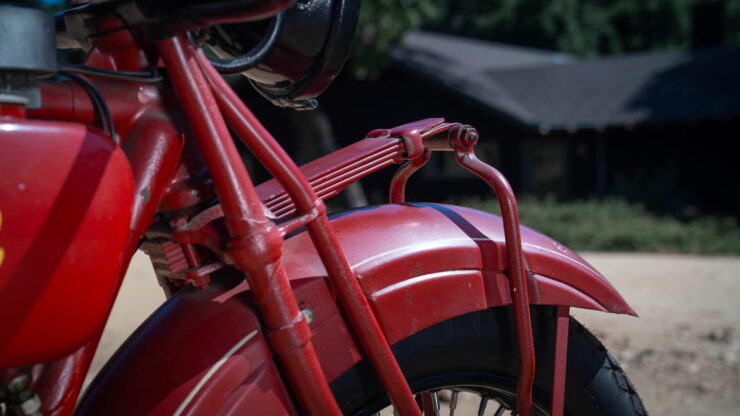 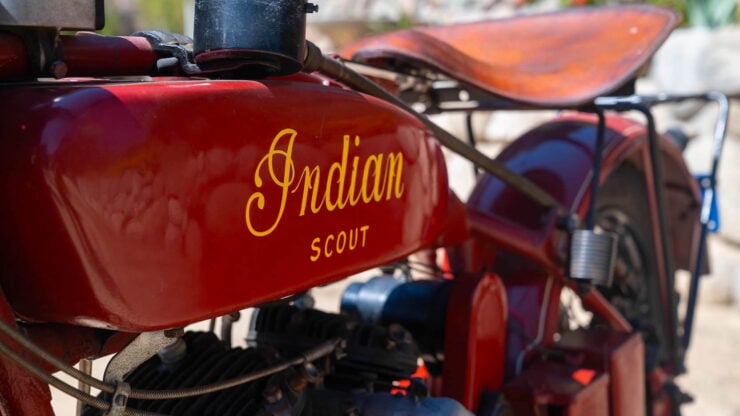 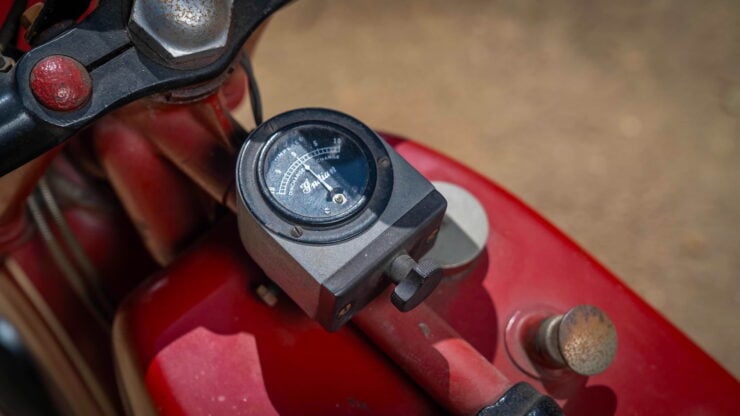 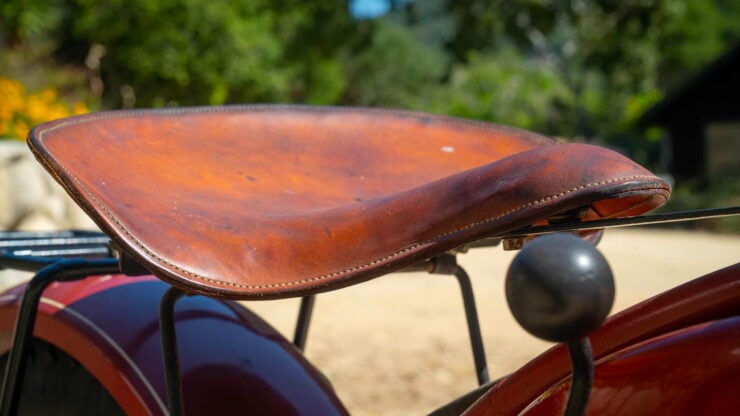 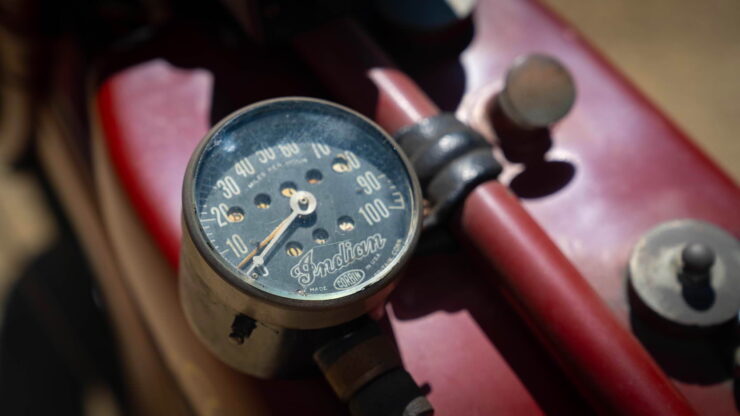 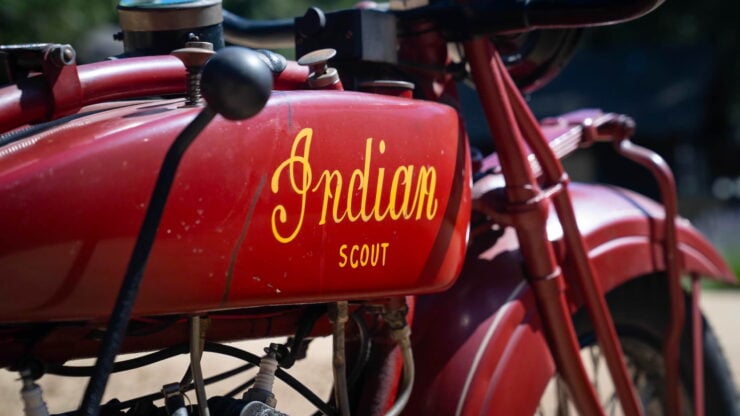 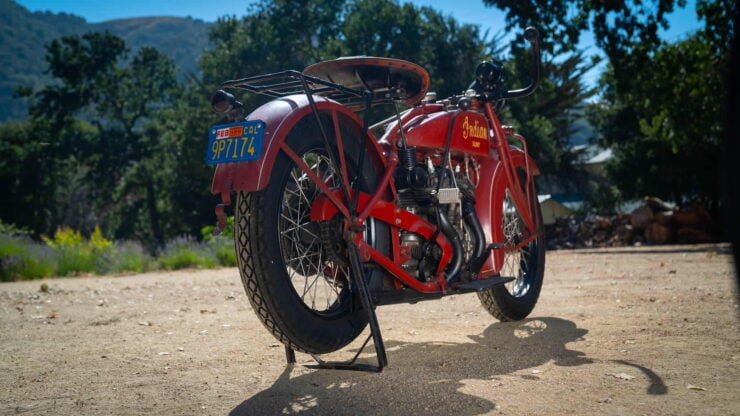