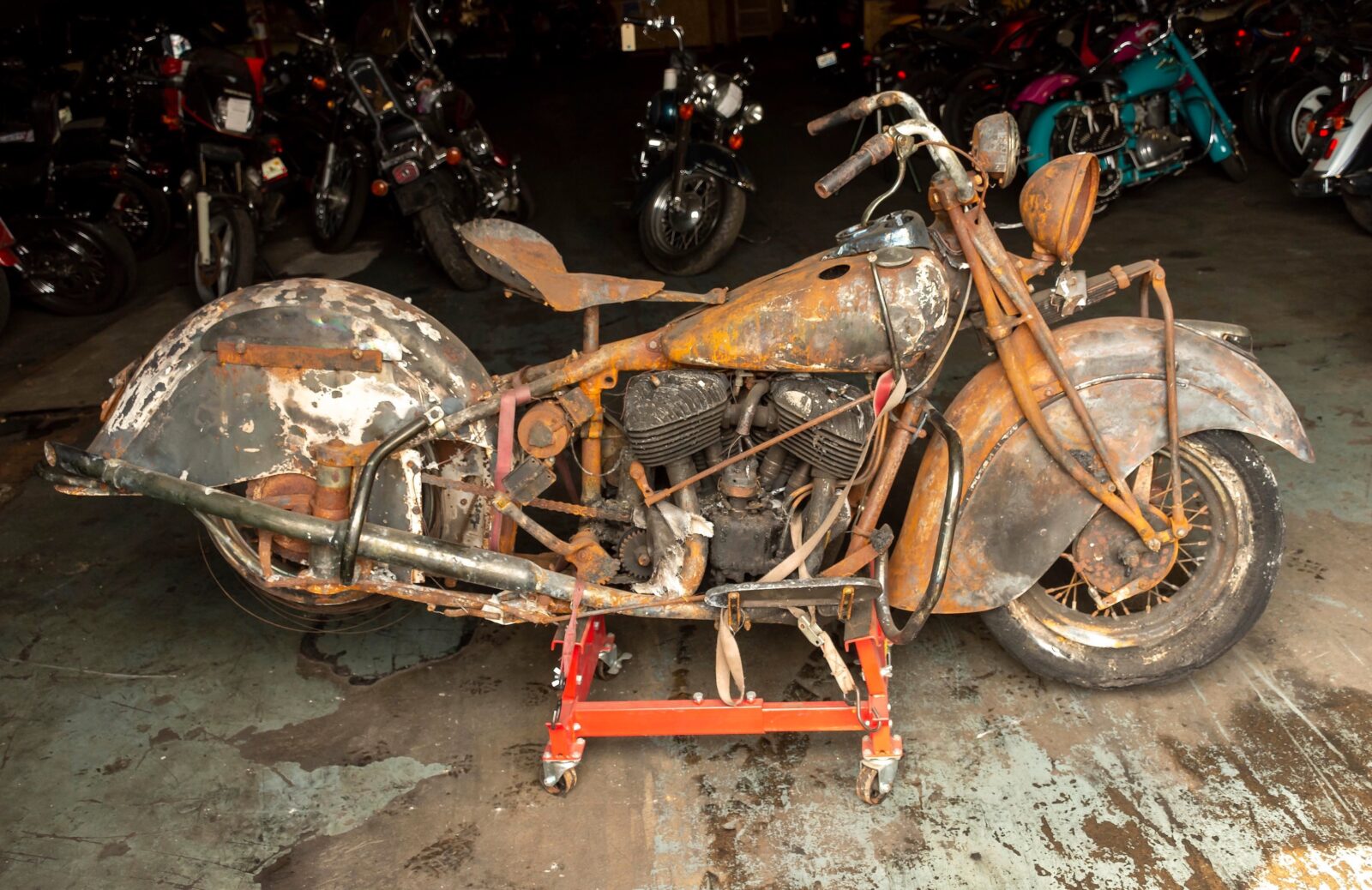 The 1940 Indian Chief is highly prized by collectors due to the fact that it was the first model year to feature those sweeping fenders that would come to characterize the model line.

The modern version of the Indian Chief has a design based closely on the signature design of the 1940 model, much like its forebear it’s the biggest and most powerful motorcycle in the line up, with the Scout offering a less expensive and more sporting ride.

✱ This 1940 Indian Chief was restored to concours condition in 1992, it was later the recipient of numerous awards including second place at Hershey in 1995.

✱ Sadly the bike was in a shop fire that has left it in the condition you now see in the images above and below.

✱ Though it looks bad at first glance the actual metalwork all looks free from warping or melting, meaning that a talented pair of hands will be able to restore it back to its former glory.

The 1940 Indian Chief – An American Icon

The Chief has always been Indian’s largest and most expensive model, it was introduced in 1922 to replace the Indian Powerplus and it would be the only model that Indian brought back into production after the end of WWII.

When you ask someone to picture an Indian motorcycle in their head the overwhelming majority of people are going to envisage something akin to the 1940 Indian Chief, probably in red, with its sweeping fenders, gleaming chrome work, a single sprung saddle, and of course, that thumping V-twin. 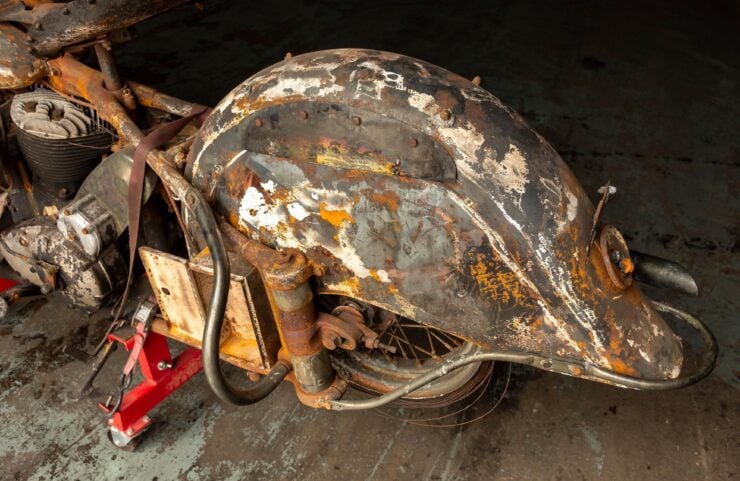 Above Image: This is one of the most challenging project bikes we’ve ever featured, but once it’s been restored it’ll be a good example of one of the most beautiful American motorcycles of its age.

When it was first released in 1922 the Chief was powered by an air-cooled 1,000cc V-twin (61 cubic inches) that was based on the earlier Powerplus engine. The capacity would be increased in 1923 to 1,200cc (73 cubic inches) with the release of the “Big Chief,” this was initially done for sidecar use however the additional power proved popular with solo riders too, and in 1928 the smaller engine size was discontinued.

Whereas the Indian Scout 101 would become famous for its racing prowess on the early race tracks of North America, the Chief would become the motorcycle of choice for people with a little more money to spend who wanted that extra power, comfort, and prestige.

During the Second World War the Chief, along with the Scout and Junior Scout, would be used by the armed forces of the United States and a number of other allied countries. The most common American motorcycle of the war was the Harley-Davison WLA, however there were Indians used in Europe and further afield.

Indian went bust in 1953 and was then resurrected a number of times over the years, each resurrection brought its own take on the original Indian Chief however none of them survived more than a few years until recently when the company was brought back by Polaris. 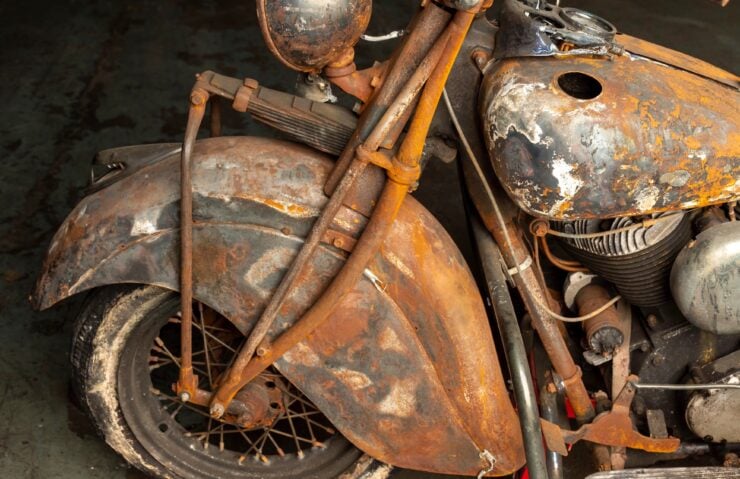 Above Image: 1940 was the first year that Indian fitted the now famous sweeping fenders to the front and back of the Chief, creating a signature style that persists to the modern Indian Chiefs.

It’s clear that the Chief you see here has been through hell, the shop fire that left it in its current condition was clearly a major blaze and its impressive that the bike survived at all.

Restorations like this require an experienced hand, the one thing that’s clear is that every single part is going to need to be disassembled and thoroughly inspected before either being reconditioned or replaced. Some metal work will be required of course, but the alloy engine appears to have survived remarkably intact – aluminum has a relatively low melting point of 660ºC, and fortunately it appears that this fire didn’t reach that temperature.

The good news is that the price guide on this scorched Chief is decidedly affordable, Bonhams estimate that it’ll sell for between $6,000 and $8,000 USD and bidding is live at the time of writing. If you have the skills required to restore a lightly singed motorcycle you can click here to visit the listing. 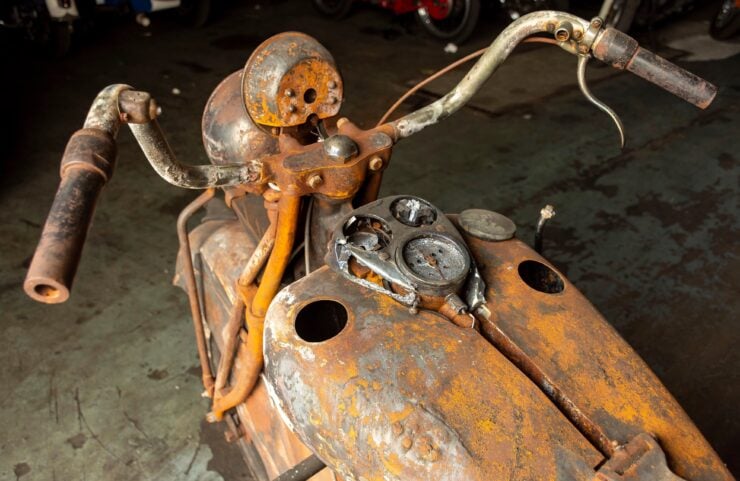 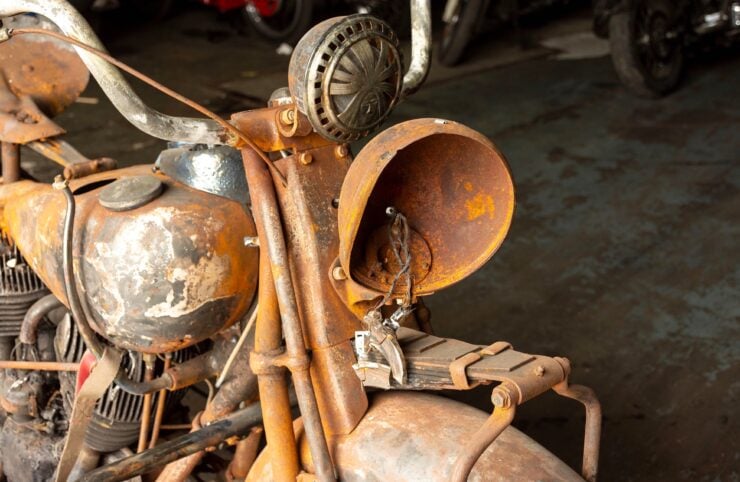 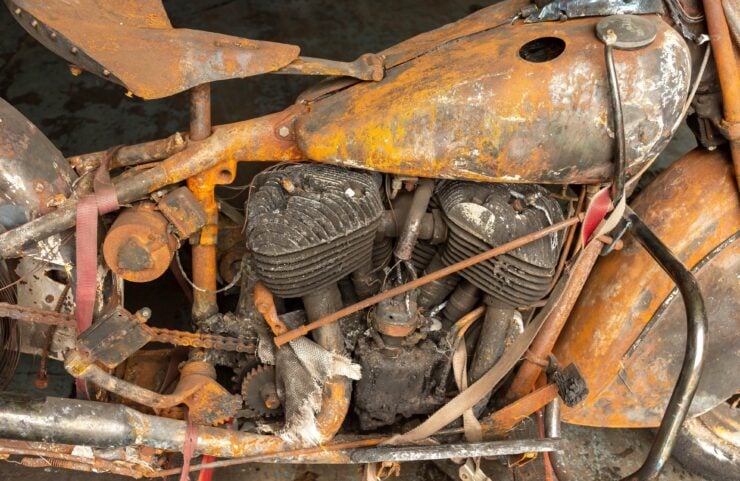 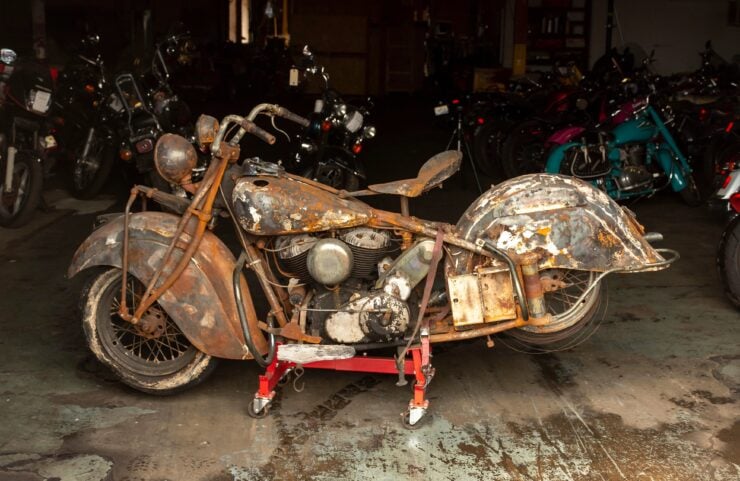 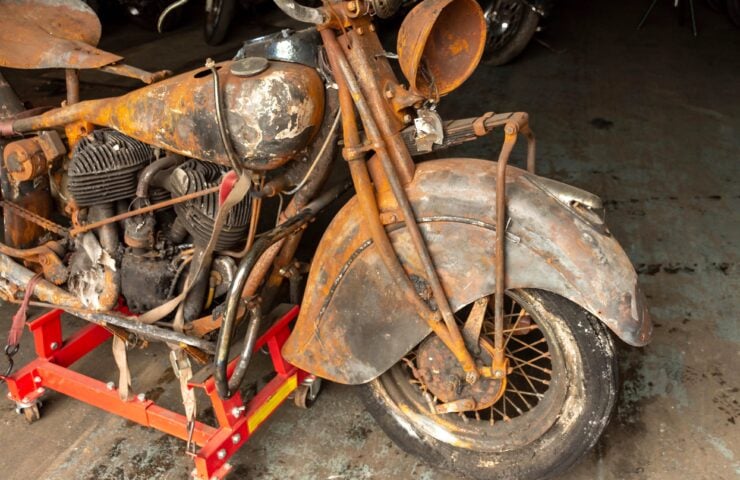 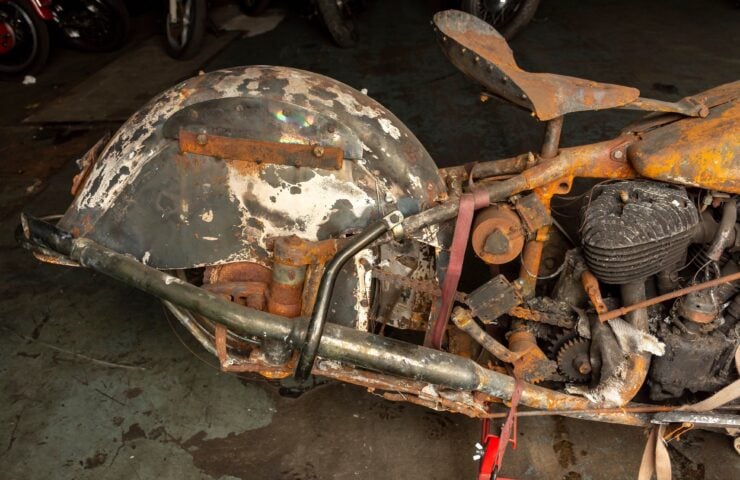 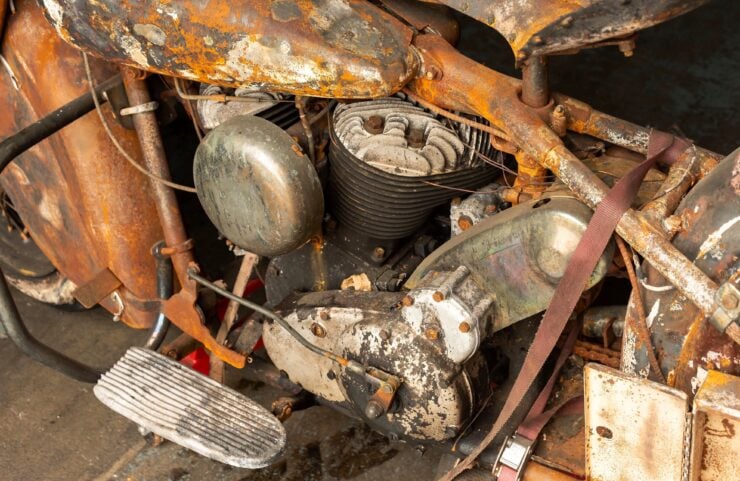 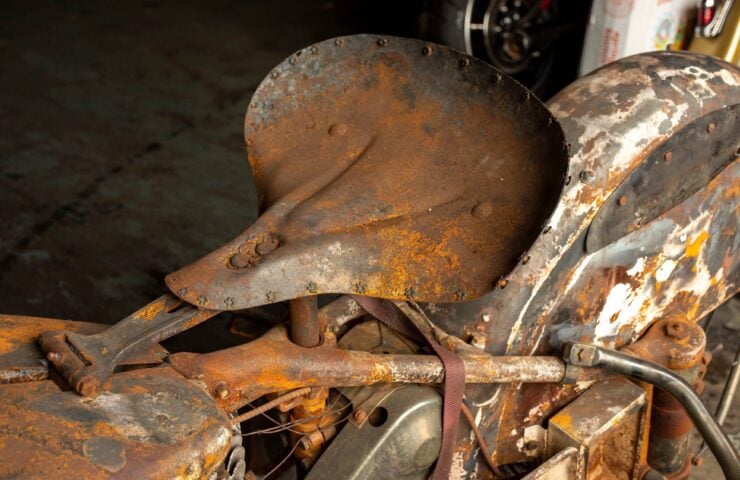 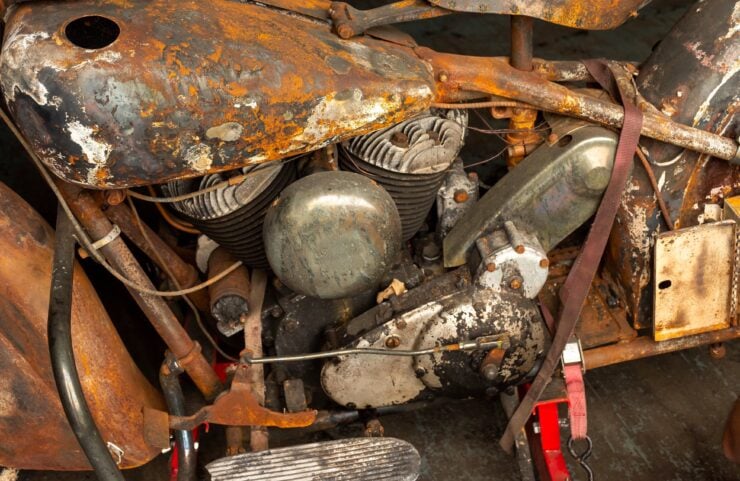