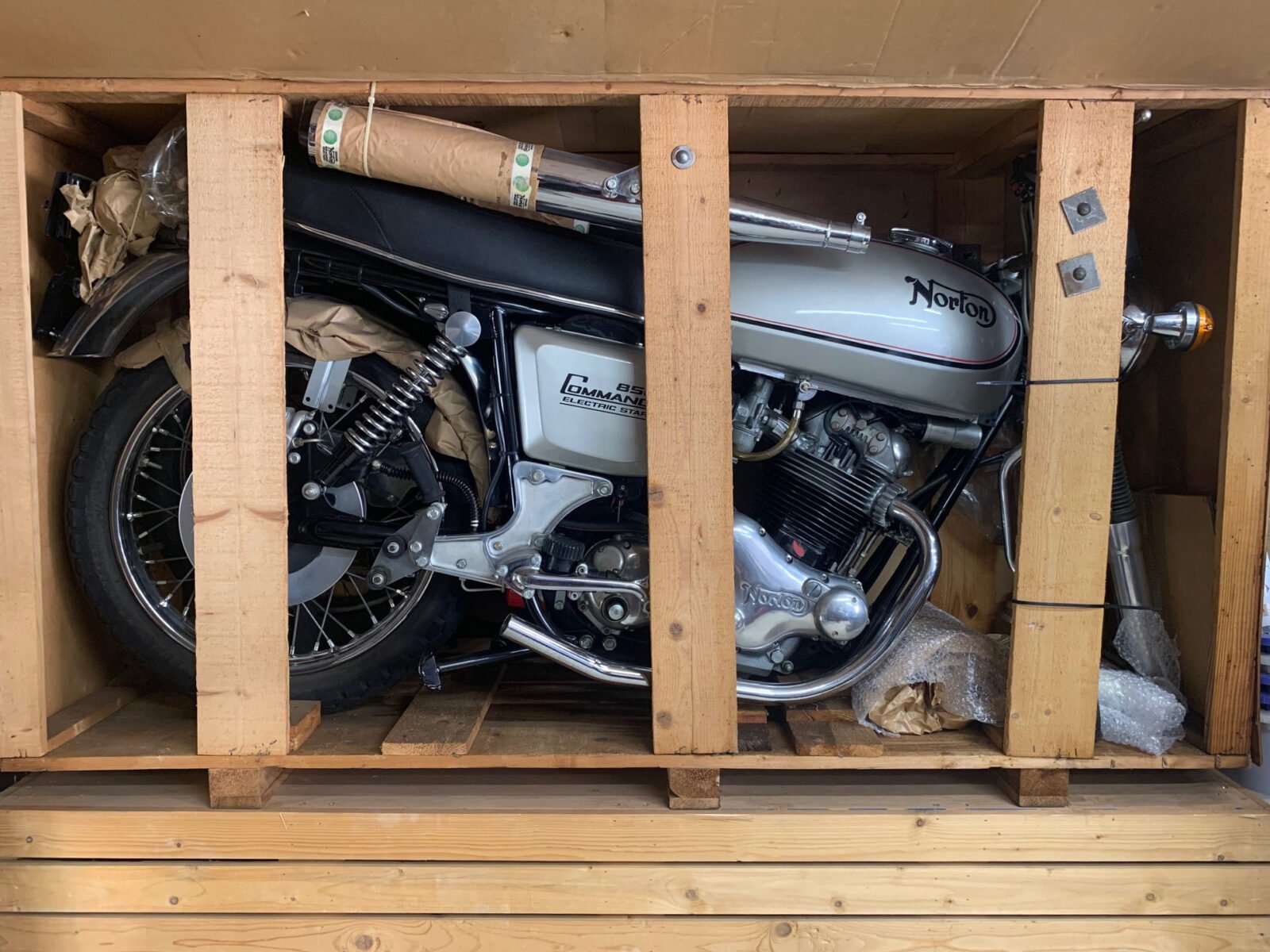 This 1977 Norton Commando Interstate has never been unpacked from its original factory crate, amazingly it has passed through the hands of three owners in the past 43 years and all of them opted to preserve it rather than assemble it.

The Norton Commando was one of the last great hurrahs of the original British motorcycle industry – before the onslaught of affordable Japanese motorcycles like the Honda CB750 took their toll.

Despite the fact that the Commando has traditional pre-unit construction, where the engine and gearbox are seperate and do not share the same casing, it proved remarkably successful and it won the Motor Cycle News “Machine of the Year” award for five successive years from 1968 to 1972. 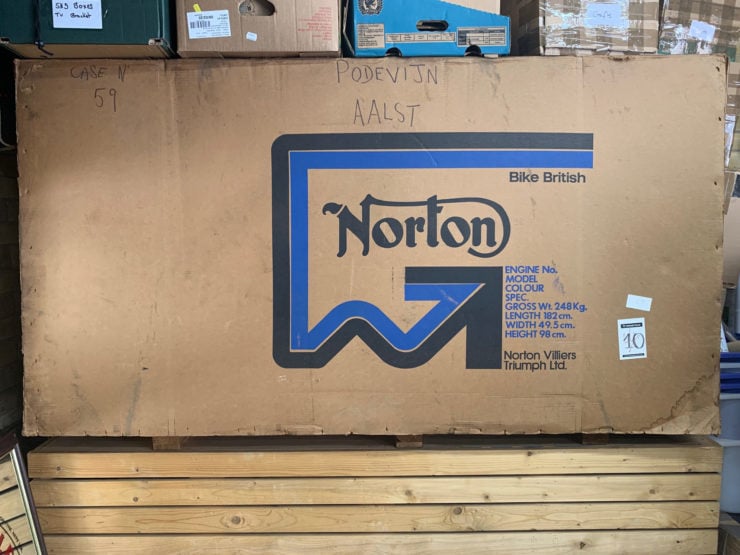 Although they were forced to use older engines due to budgetary restrictions the team at Norton knew how to build a great motorcycle. Norton was founded in 1898 and they took their first Isle of Man TT win in 1907 in the twin cylinder class. This would be the first major win for the company and it would lead to a staggering array of wins and championships over the following decades.

This winning tradition continues through to the modern day thanks to the proliferation of vintage motorcycle racing events around the world. Nortons are still a favourite to win in many of these races and you can see them competing in hard-fought races at major events like the Goodwood Revival.

The Norton Commando was first introduced in 1968 as a replacement for the outgoing Norton Atlas model. The Atlas was (and still is) beloved for its combination of the big Norton parallel twin engine with the iconic Norton Featherbed chassis. The downside is that the engine was hard-mounted to the frame and the parallel twin was fitted with a 360º crank which meant both pistons rose and fell together, which caused significant vibration. 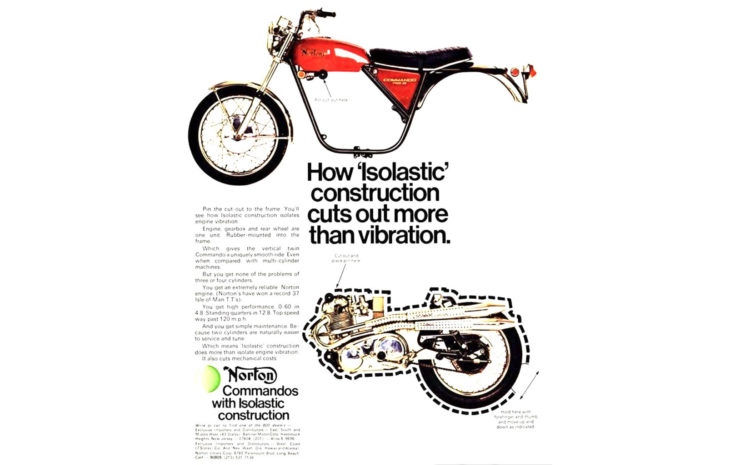 The Commando had an all-new frame designed by a former Rolls-Royce engineer and now for the first time the engine was mounted using rubber vibration-absorbing mounts called the Norton “Isolastic” system. This significantly reduced vibration experienced by the rider, the good frame paired with Norton’s race-derived suspension resulted in superbike performance by the standards of the late 1960s.

The Norton Commando Interstate model was aimed at those who needed a motorcycle capable of long-distance highway travel. It’s fitted with a notably larger fuel tank with a capacity of 5 1/2 gallons (25 litres) – a sizeable increase over the Roadster model’s 2 1/2 gallons (11.3 litres).

The Interstate used the same engine as the other Commando models, an air-cooled parallel twin that produced 58 bhp and 56 ft lbs of torque, and a top speed of approximately 115 mph.

The still-crated 1977 Norton Commando Interstate is coming up for auction with H&H Classics on November the 14th at the National Motorcycle Museum. The price estimate is between £20,000 and £25,000 however it’s so far for motorcycles like this to come up for sale still in their crates that it’s hard to know what it may actually sell for. 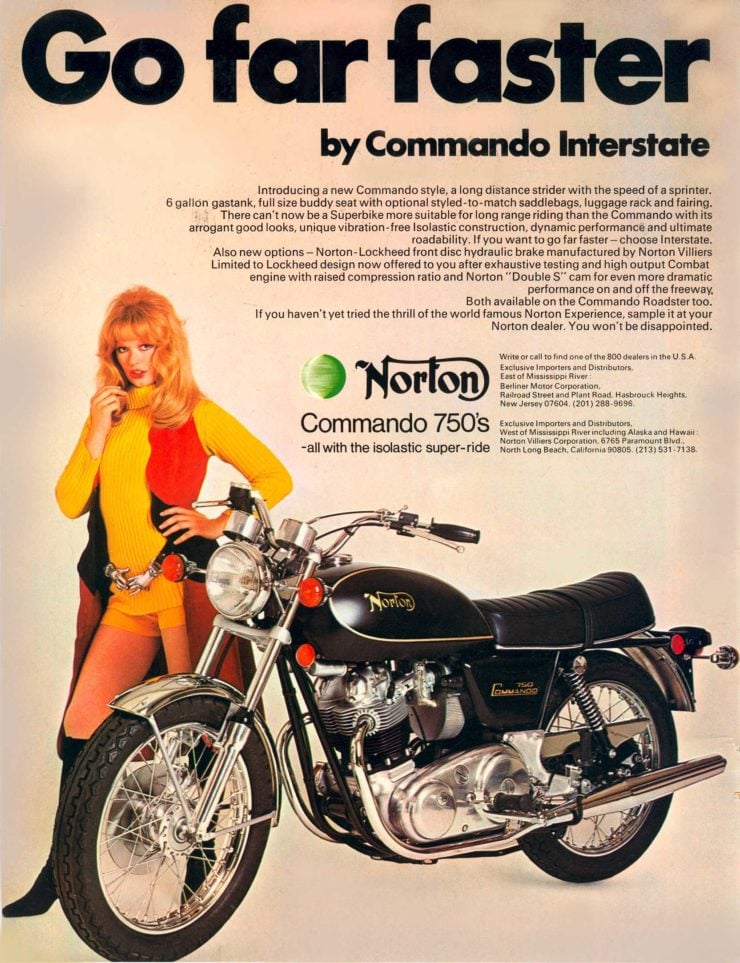 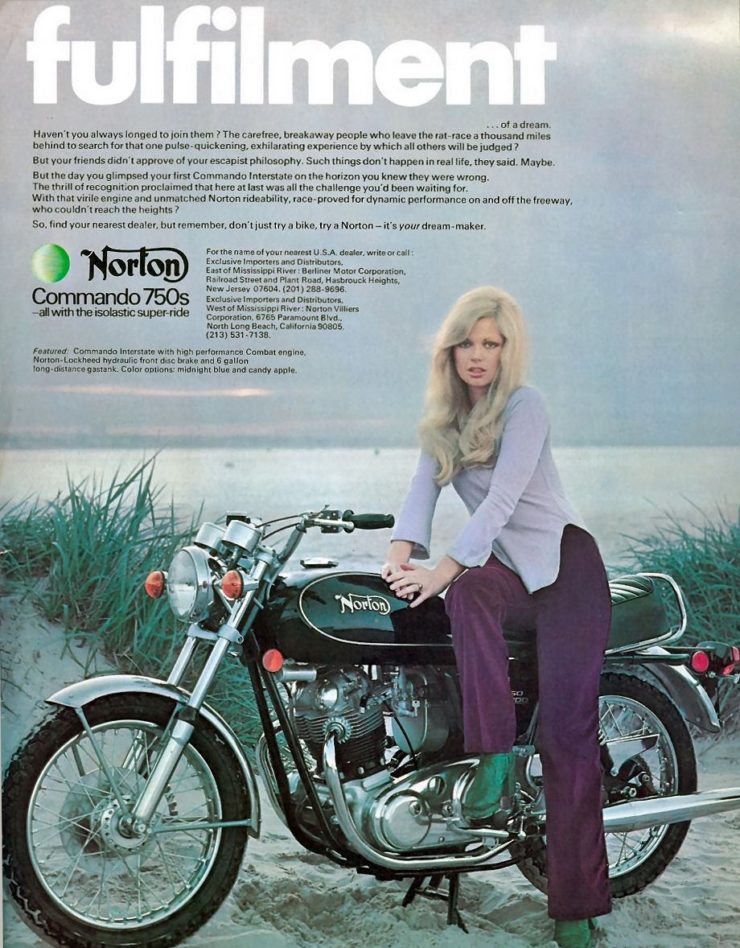