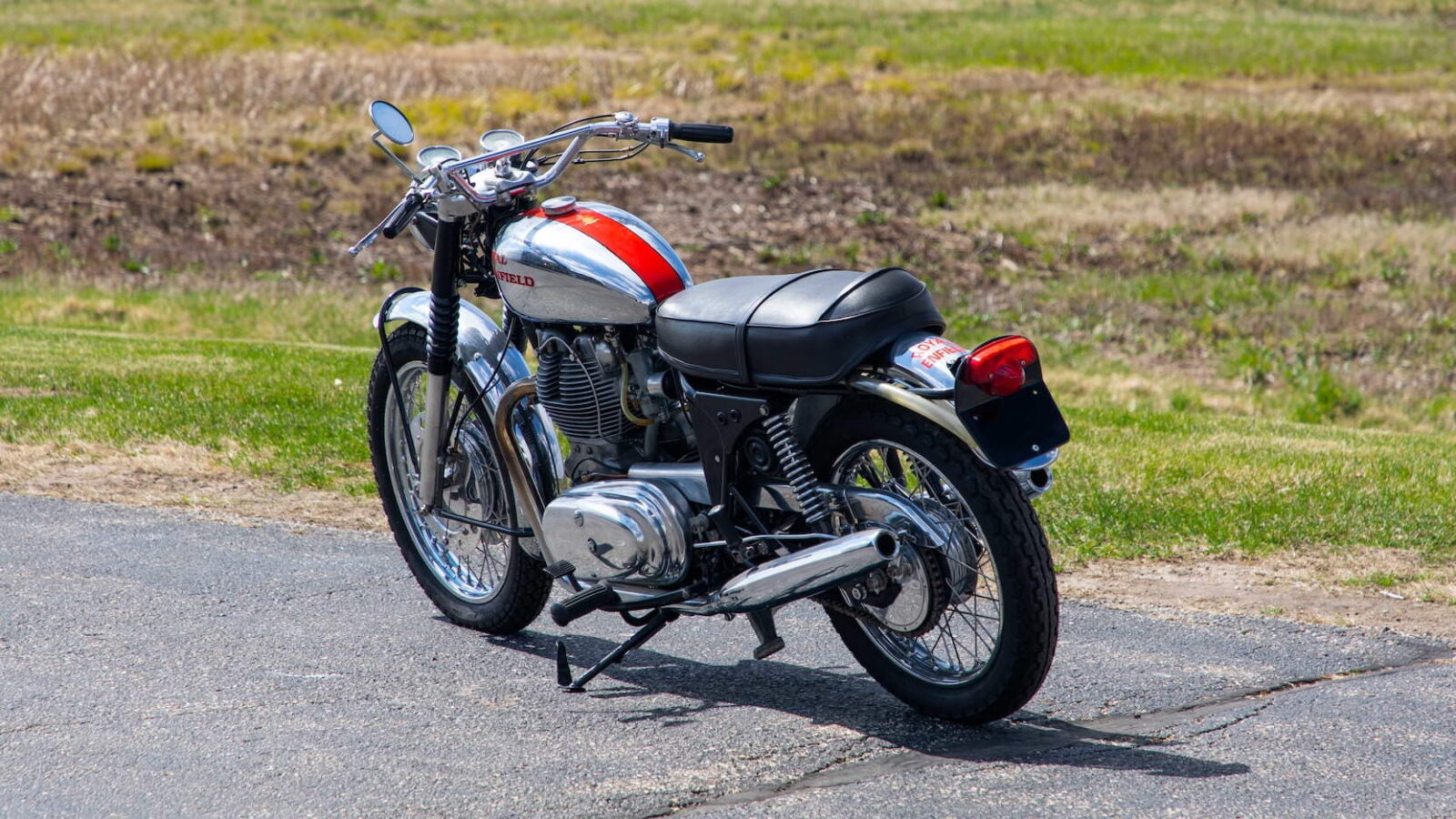 The Royal Enfield Interceptor is a rare British desert sled from the 1960s that is now highly sought after by enthusiasts for its excellent power-to-weight ratio, good handling, and for the fact that it’s rarer than comparable Triumphs and Nortons.

The 1968 Royal Enfield Interceptor you see here is a later example that was cosmetically restored in 2017, it also has new a clutch, brakes, tires, and all cables. The odometer shows 19,473 which is believed to be actual, and it has popular American market design cues like the chrome gas tank.

The Royal Enfield Interceptor was introduced in 1960 as the Interceptor 700, it was the fastest and most powerful motorcycle that Royal Enfield had ever built, and it was intended for the North American market – specifically the desert and off-road racing market segment that was dominated by the likes of Triumph, Matchless, BSA, and Norton. 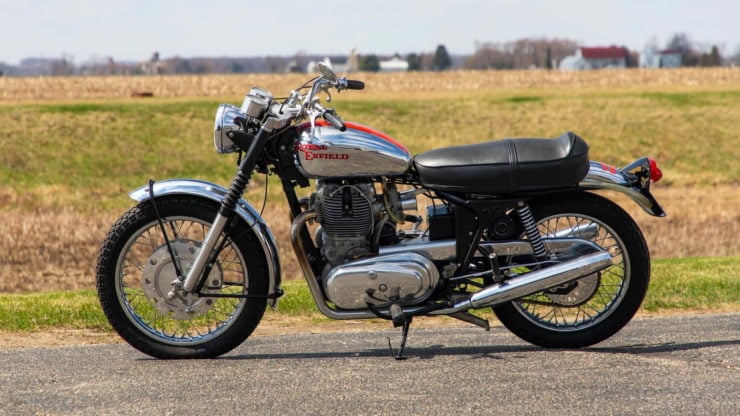 Much like most of their British competition, Royal Enfield opted to use an air-cooled parallel twin in their top of the line enduro/scrambler model.

In 1962 the 700cc (actually 692cc) parallel twin in the Interceptor was upgraded to the new 750cc (actually 736cc), rather than just a simple capacity increase this larger version of the 700 unit was considerably re-engineered for better performance and reliability. These upgrades included stronger crankcases, an automatic advance magneto, a coil ignition, a new seat, and for the first time on a production British twin, the crankshaft was dynamically balanced from the factory.

Although they were quick and popular with their owners the Royal Enfield Interceptor never sold in numbers even remotely comparable to the big British twins of the era.

This didn’t stop engineers at Royal Enfield from continually updating the model, in 1967 they released the Series 1A Interceptor that now featured a coil ignition, the magneto was removed, and the bike had a new chrome fuel tank, a new seat, new instrument mounts, a new handlebar, and new mudguards. 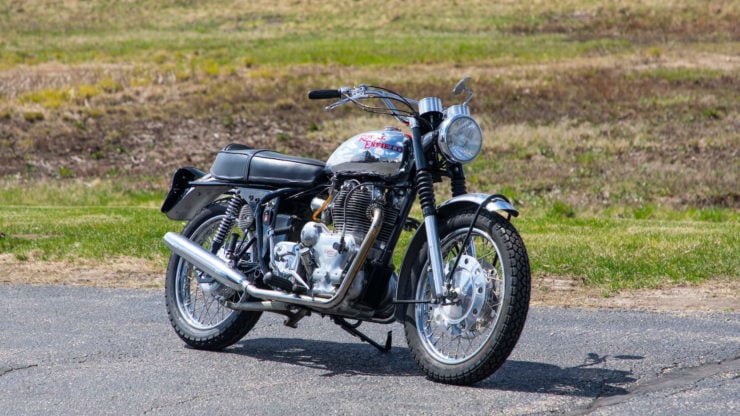 The final major iteration of the Interceptor was the Series 2 Interceptor, this model featured a newly developed wet sump version of the engine (to give better oil flow to the crankshaft). A number of other minor modifications were made to further improve reliability – it would be this motor that would later be used in both the Rickman Interceptor and the Clymer Enfields.

While a Series 3 Interceptor was planned it never came to fruition as the factory closed down before it was put into production. The surviving examples of the Royal Enfield Interceptor are becoming increasingly sought after, and they offer solid performance for the era with a 1/4 mile time of under 13 seconds and a claimed top speed of 120 mph.

Due to the fact far fewer examples of the Interceptor were built than their period competitors it’s far less common to see good, original Interceptors come upon for sale. The 1968 model you see here is a highly-desirable Series 1A Interceptor in good overall condition, it’s due to roll across the block with Mecum in mid-July. 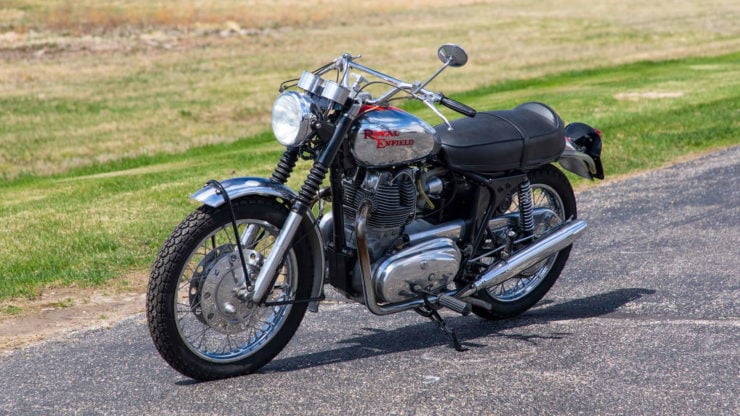 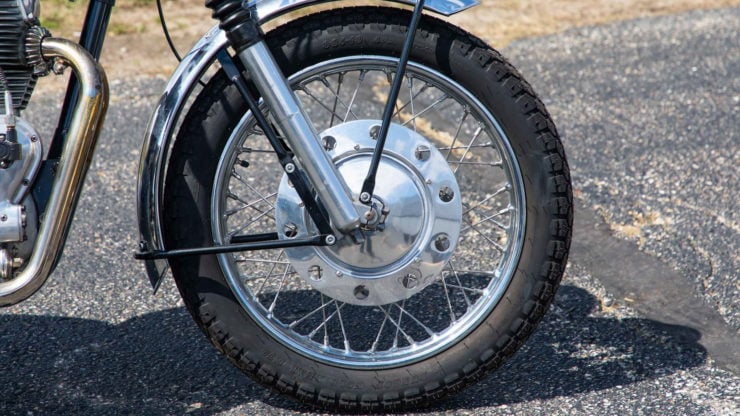 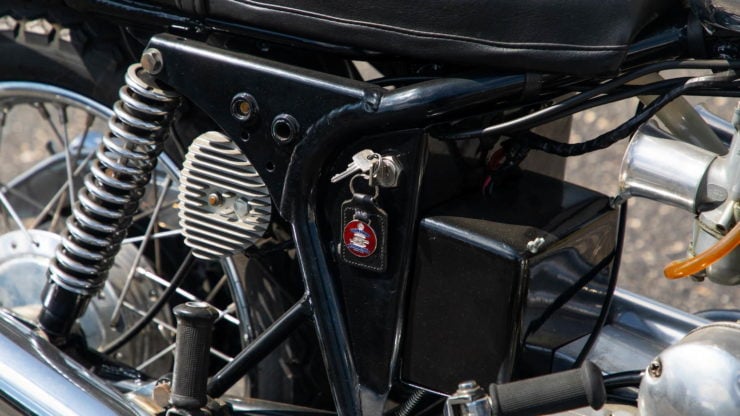 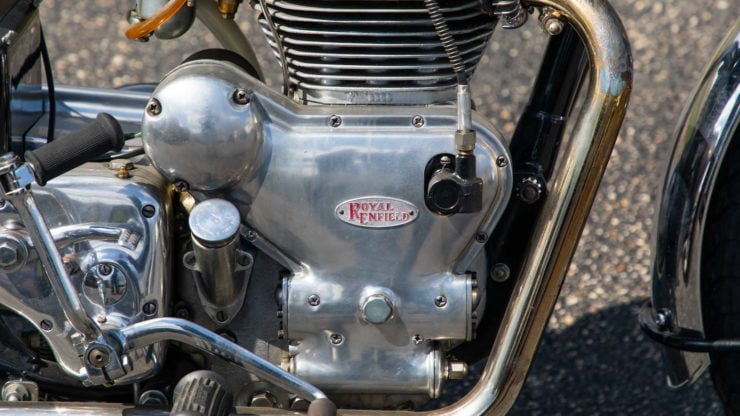 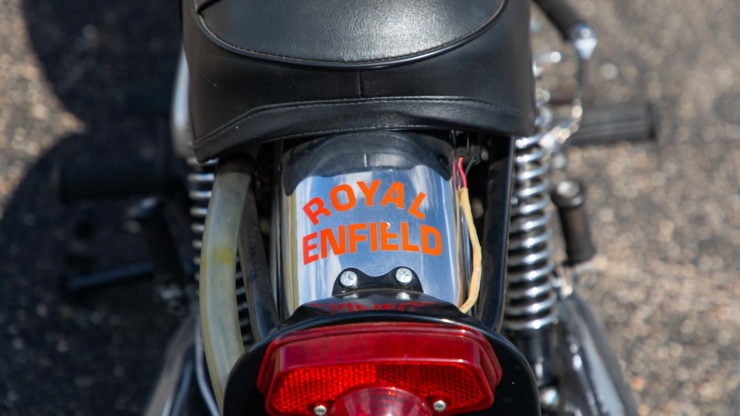 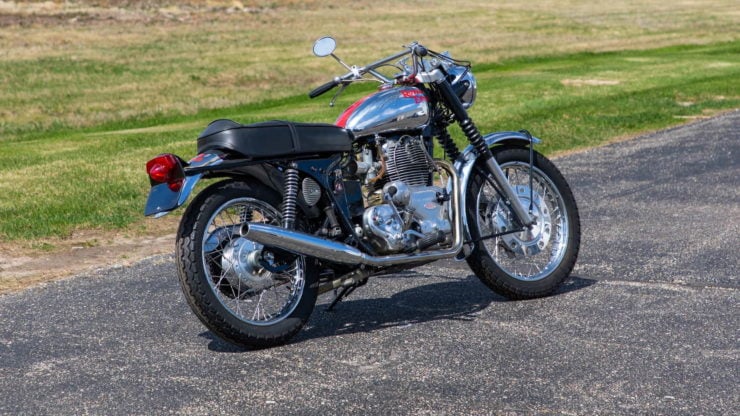 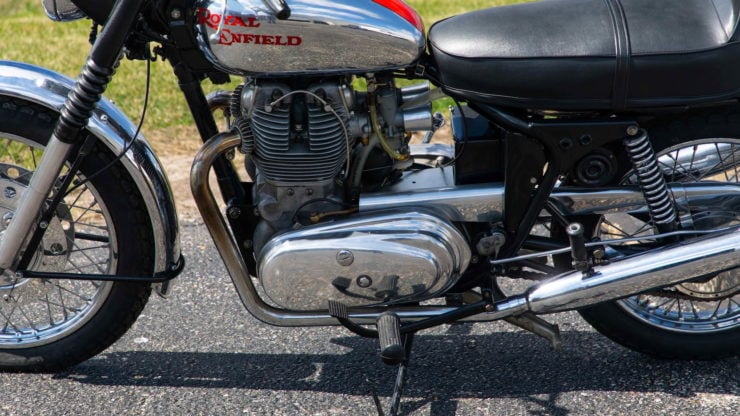 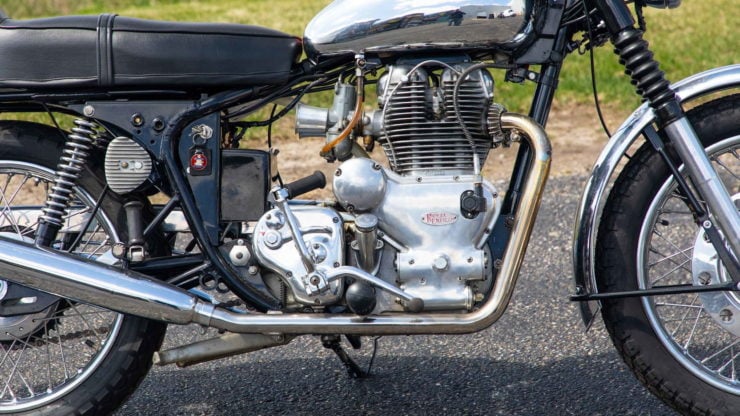 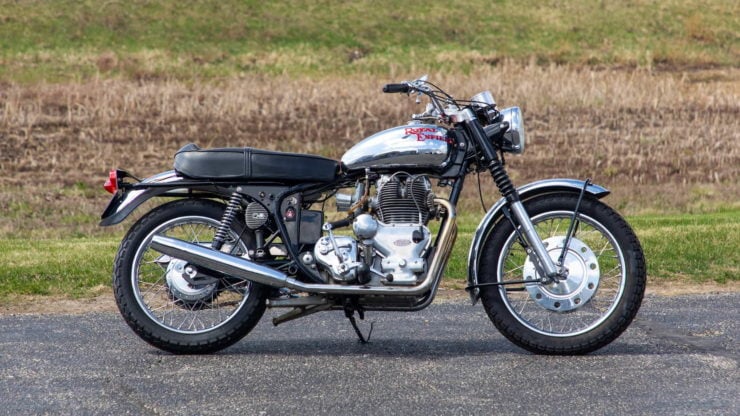 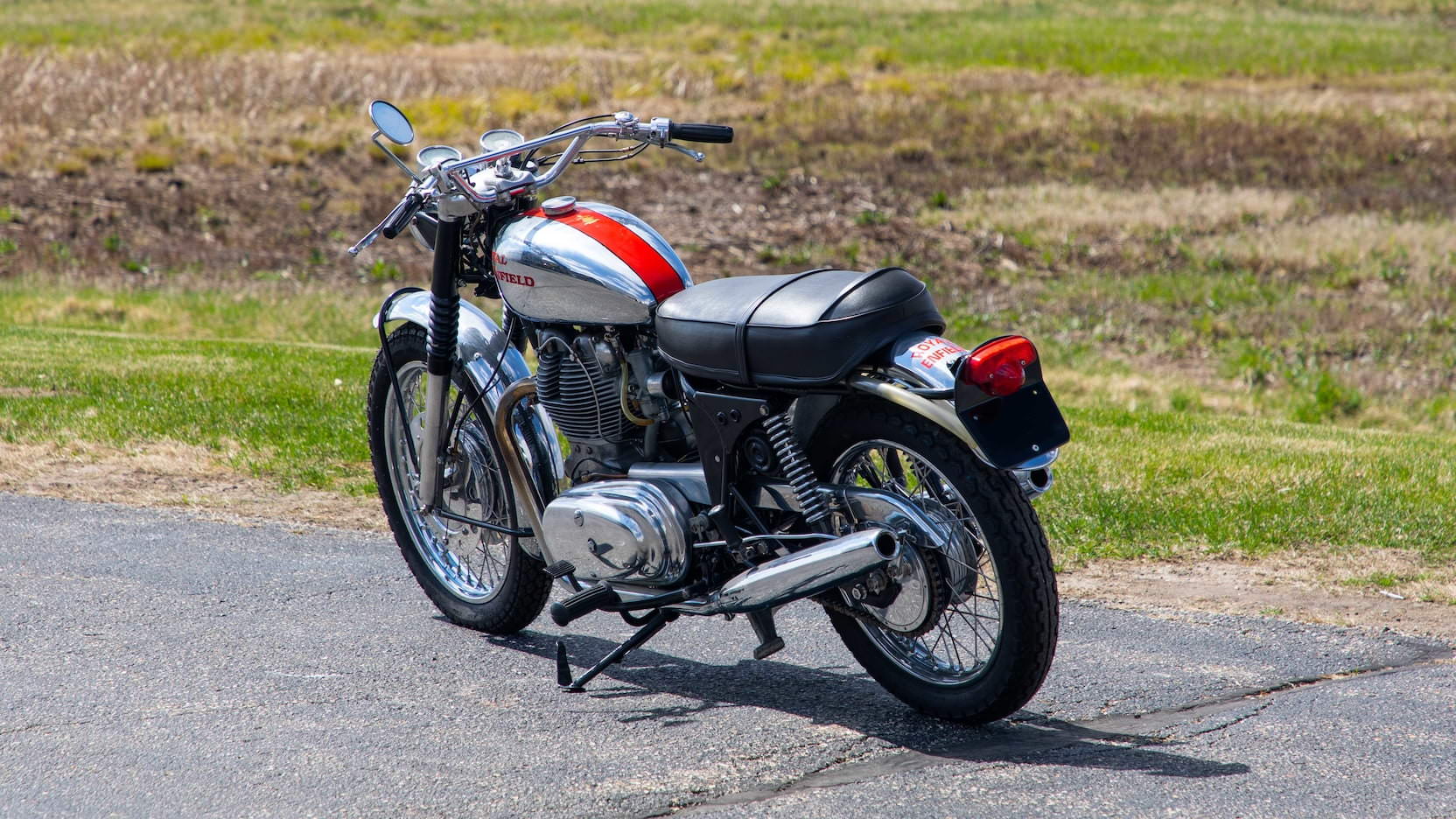 Published by Ben Branch - May 27th 2020
Related Posts
For Sale: A Suzuki RE5 Wankel Rotary-Powered Motorcycle