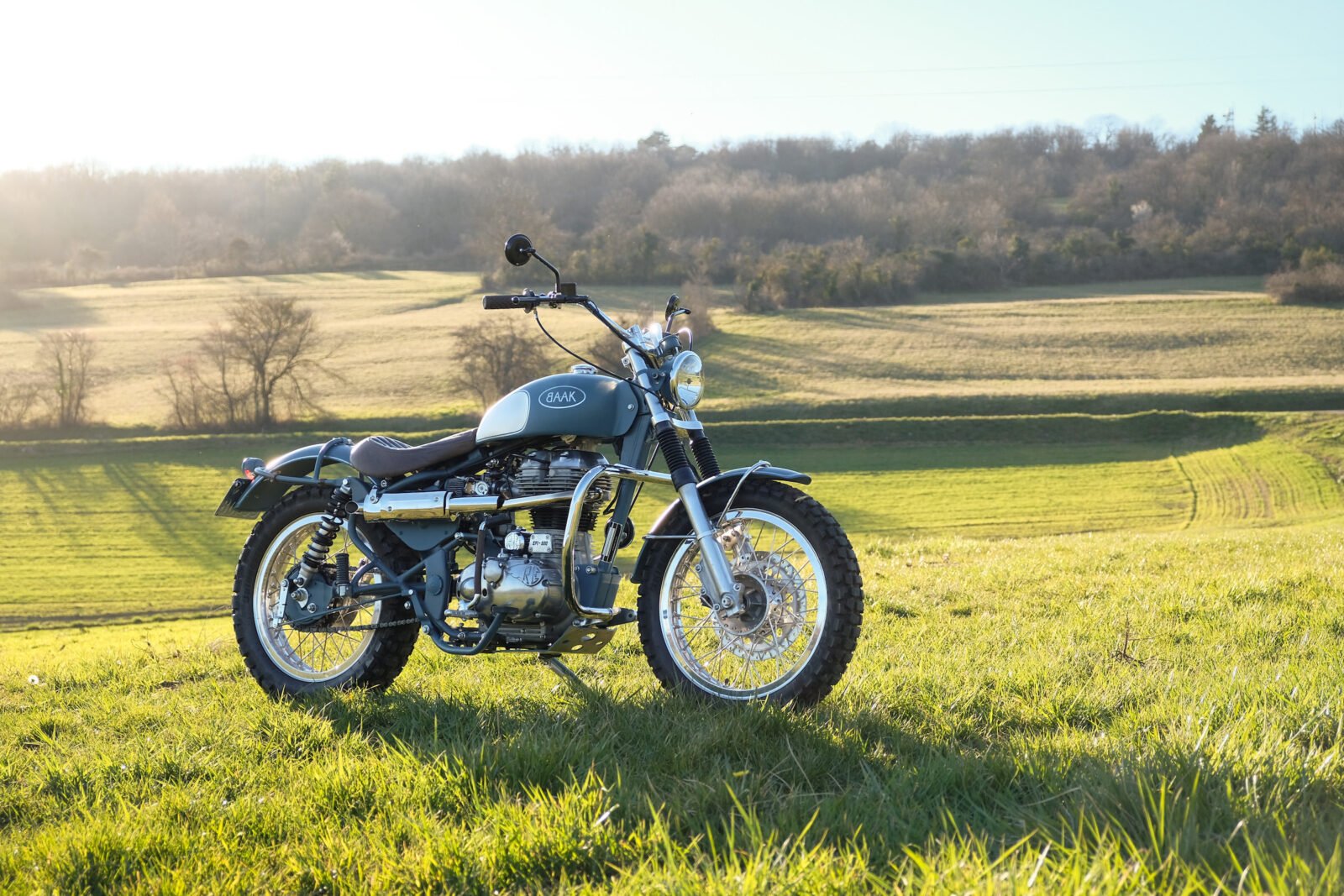 This custom Royal Enfield was built by BAAK after a young man convinced his mother that she needed a new motorcycle. Nelson (the son) and Nathalie (the mother) were looking for a suitable motorcycle that was lightweight, off-road capable, and easy to ride – much like the classic trials machines she was already familiar with.

Nelson was already a fan of custom motorcycle builder BAAK, and so he convinced his mother to commission them to build her a new bike.

A lengthy specification sheet was put together and all parties agreed that a Royal Enfield Classic 500 was the perfect motorcycle to use as a starting point for the build. The Classic 500 is based on the Bullet 500, a motorcycle that first entered production in 1932 – 7 years before the beginning of WW2. 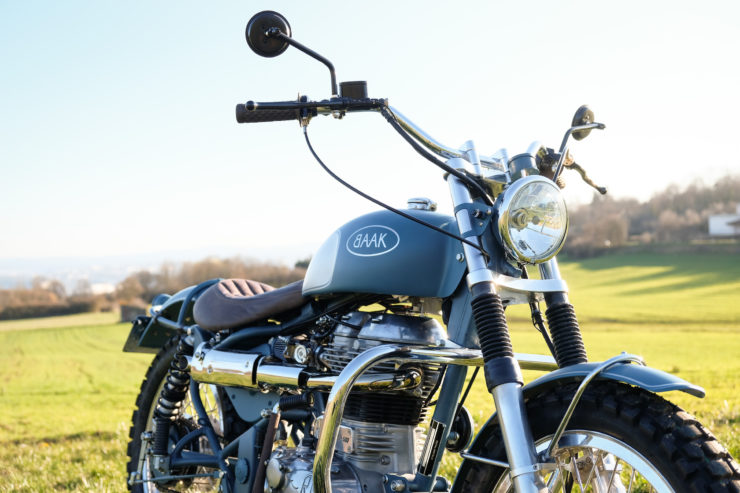 The key to the longevity of the Royal Enfield 500 series is its simplicity, originally developed, built, and sold in the United Kingdom until the company moved all operations to India, where it became the de facto motorcycle alongside its smaller 350cc sibling.

The Royal Enfield Classic 500 is powered by a single-cylinder, four-stroke engine with a capacity of 499cc, either a carburettor or fuel injection (depending on year), two pushrod actuated valves per cylinder, and it produces 27.2 bhp at 5250 rpm.

Power is sent to the rear wheel via a 5-speed transmission and a chain final drive. The frame is a simple tubular steel design with a single down tube, it uses the engine a a stressed-member, and it’s fitted with traditional telescopic forks up front, and twin shock absorbers in the rear. 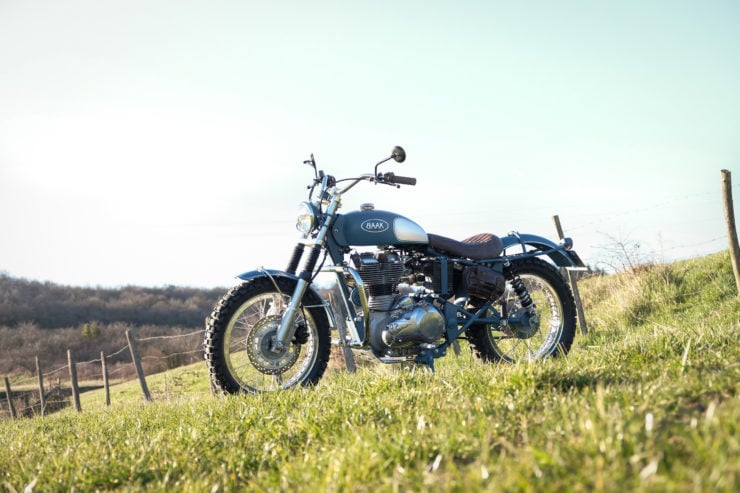 There are millions of Royal Enfields on the streets, alleys, and roads of India, they’ve proven to be strong and capable, and easy to fix when it all goes wrong.

When BAAK set about creating their own scrambler/trials version of the Classic 500 they knew they wanted to increase engine power, increase ground clearance, lower the curb weight, and toughen the bike so it would be suitable for use both on and off-road.

They began by stripping the bike back to basics and discarding anything that wasn’t needed, dropping the weight by 25 kilograms. New aluminum alloy triple trees were added along with higher-specification, adjustable shock absorbers that helped increase ground clearance. New alloy fenders were added front and rear, with an alloy bash plate under the engine, and a chromed high-exit exhaust system with heat shielding. 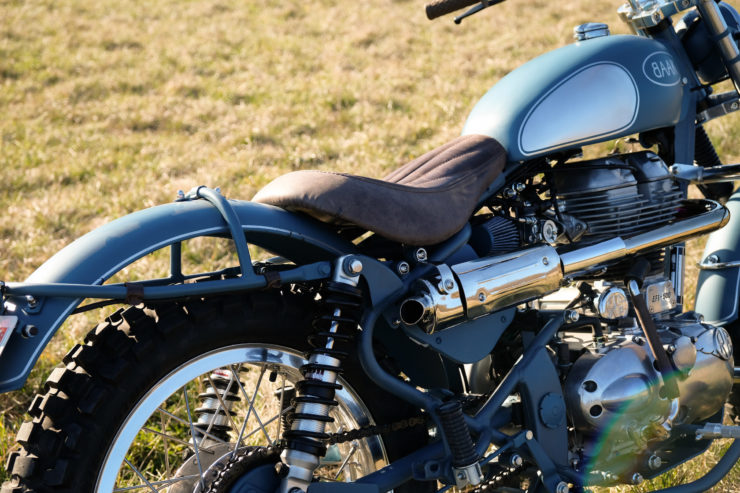 New aluminum spoked wheels were added front and back along with new scrambler-style handlebars, crash bars, and a leather upholstered leather seat. A high-compression piston kit was added to boost power, this was paired with a new higher flow intake system capped with a high-flow air filter.

The weight reduction coupled with the power increase and the improved ground clearance gave the bike performance not dissimilar to classic scramblers and trial bikes – exactly what Nathalie wanted.

If you’d like to see more custom motorcycles by BAAK or commission them to build you one you can click here. They also sell a variety of custom parts for motorcycles as well as apparel and custom cars. 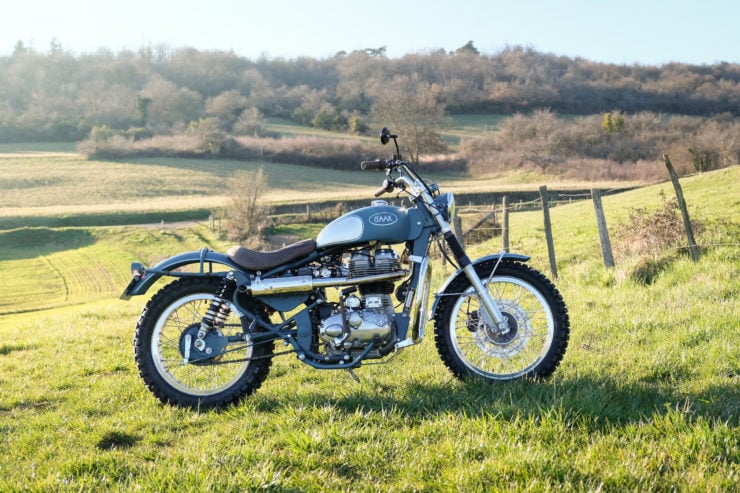 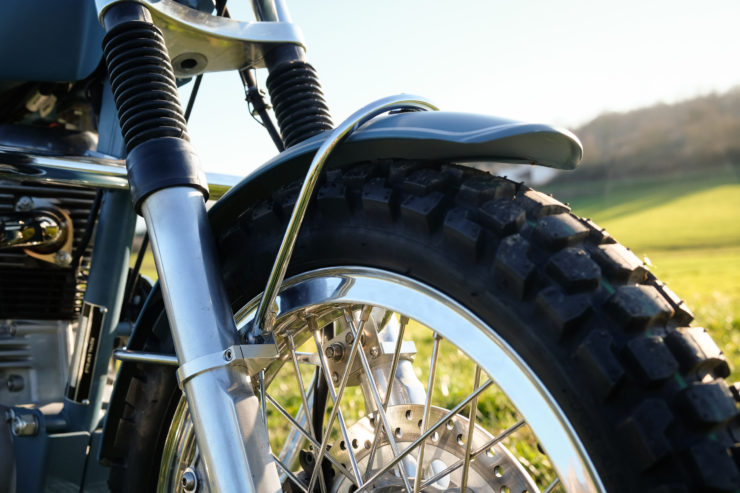 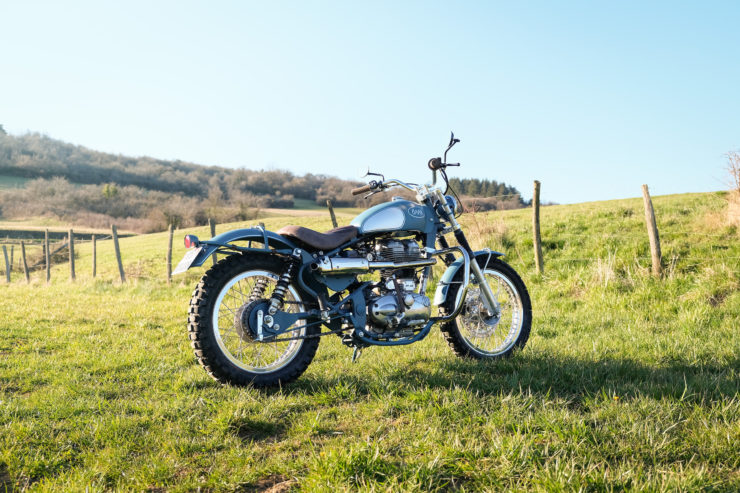 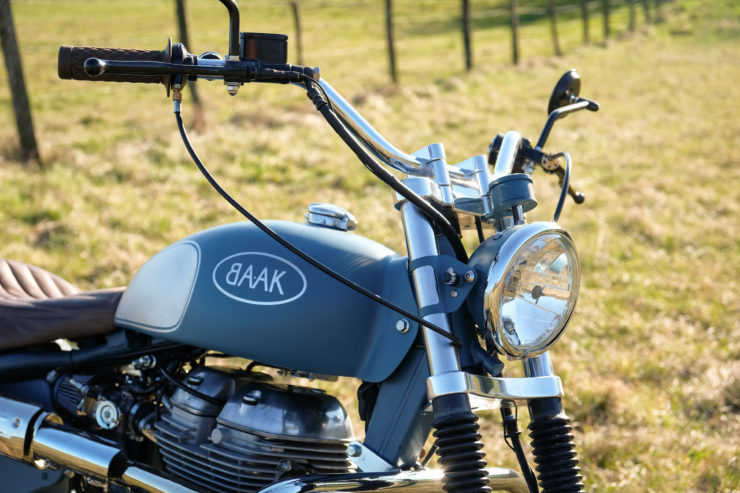 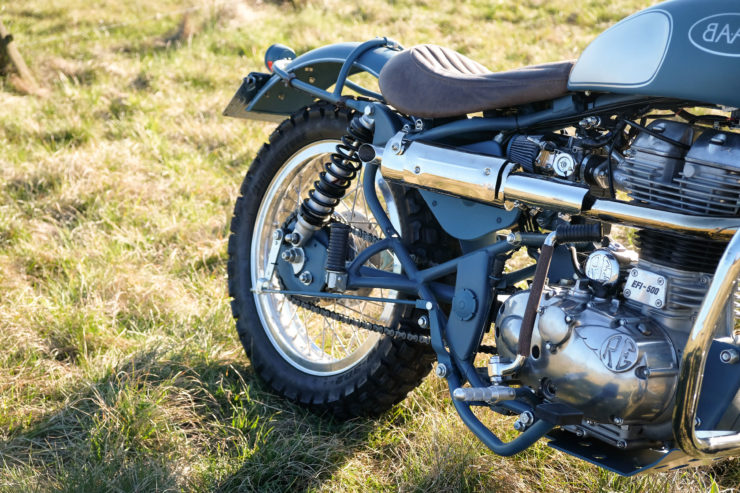 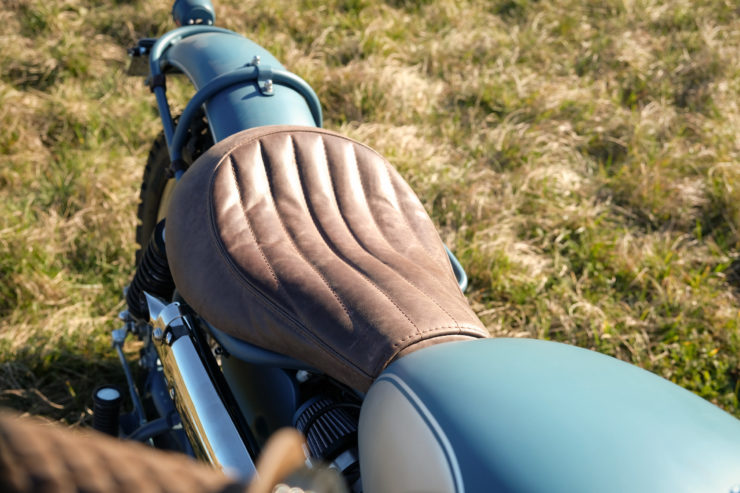 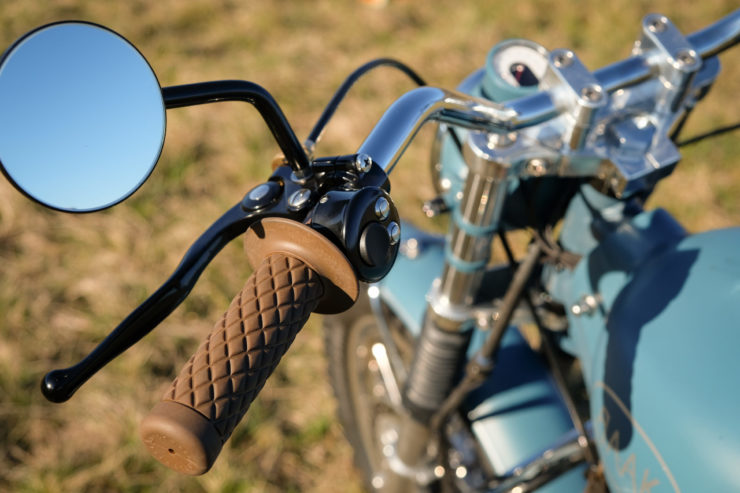 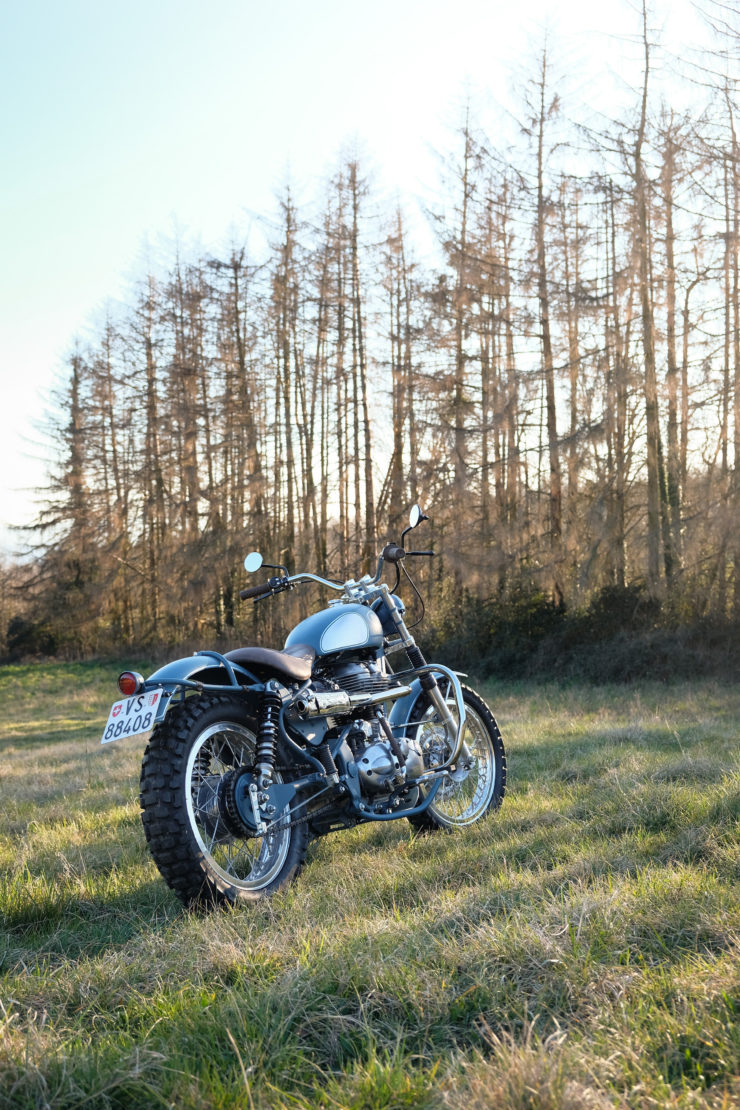 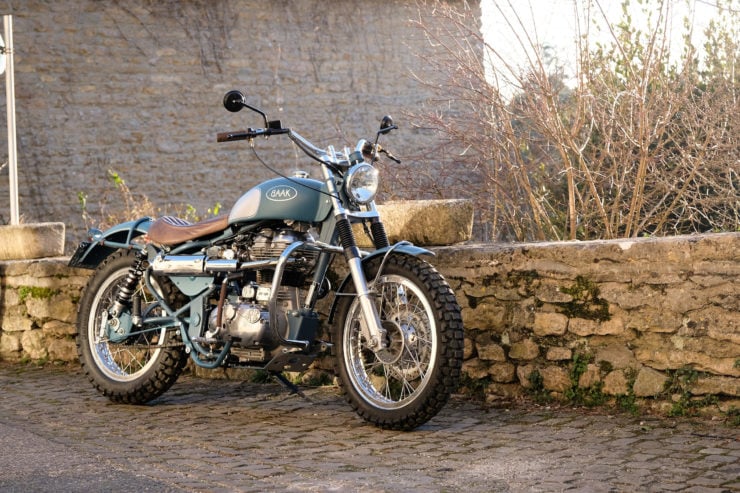 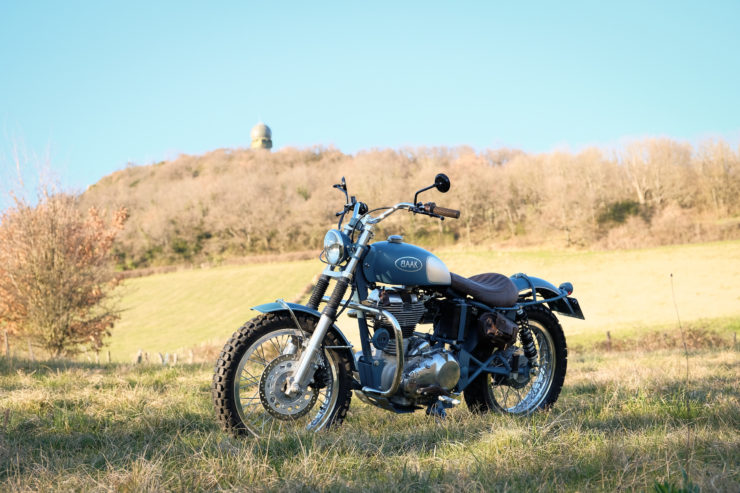 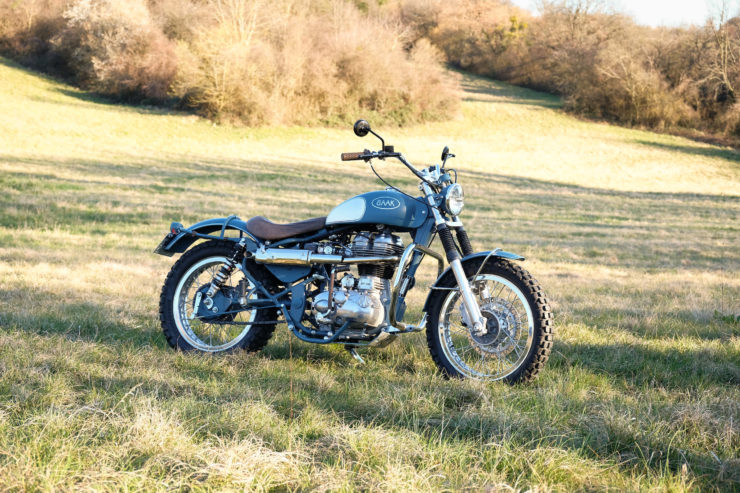 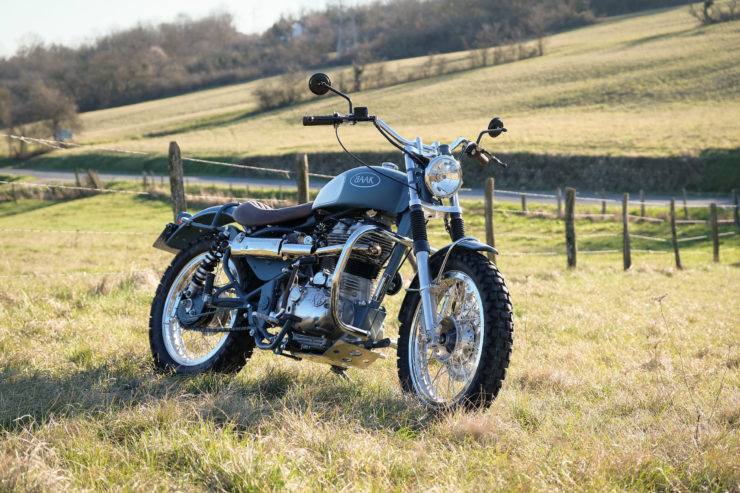 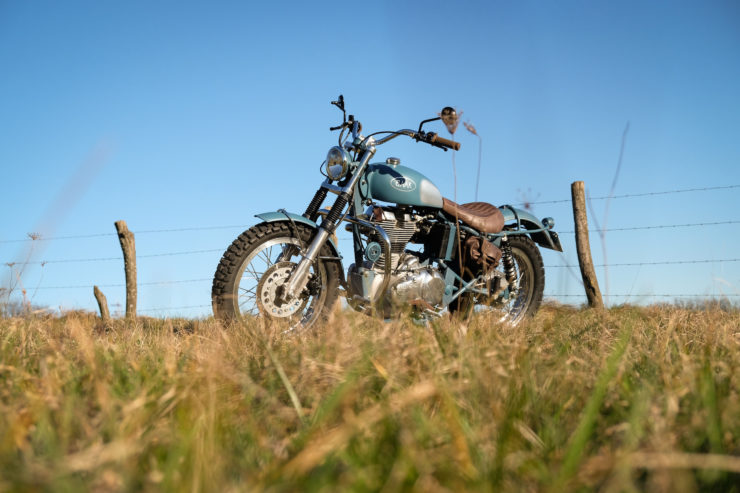 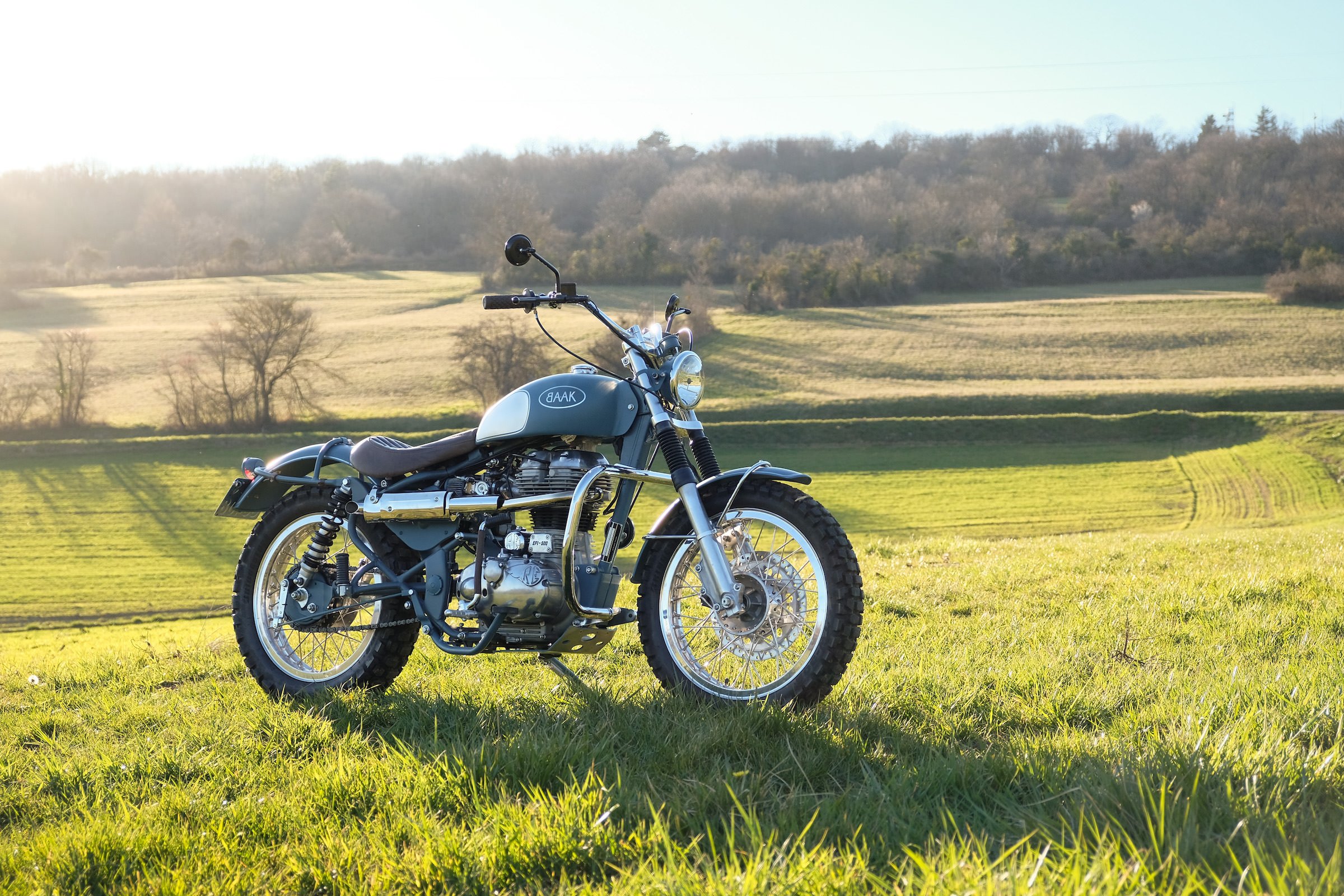