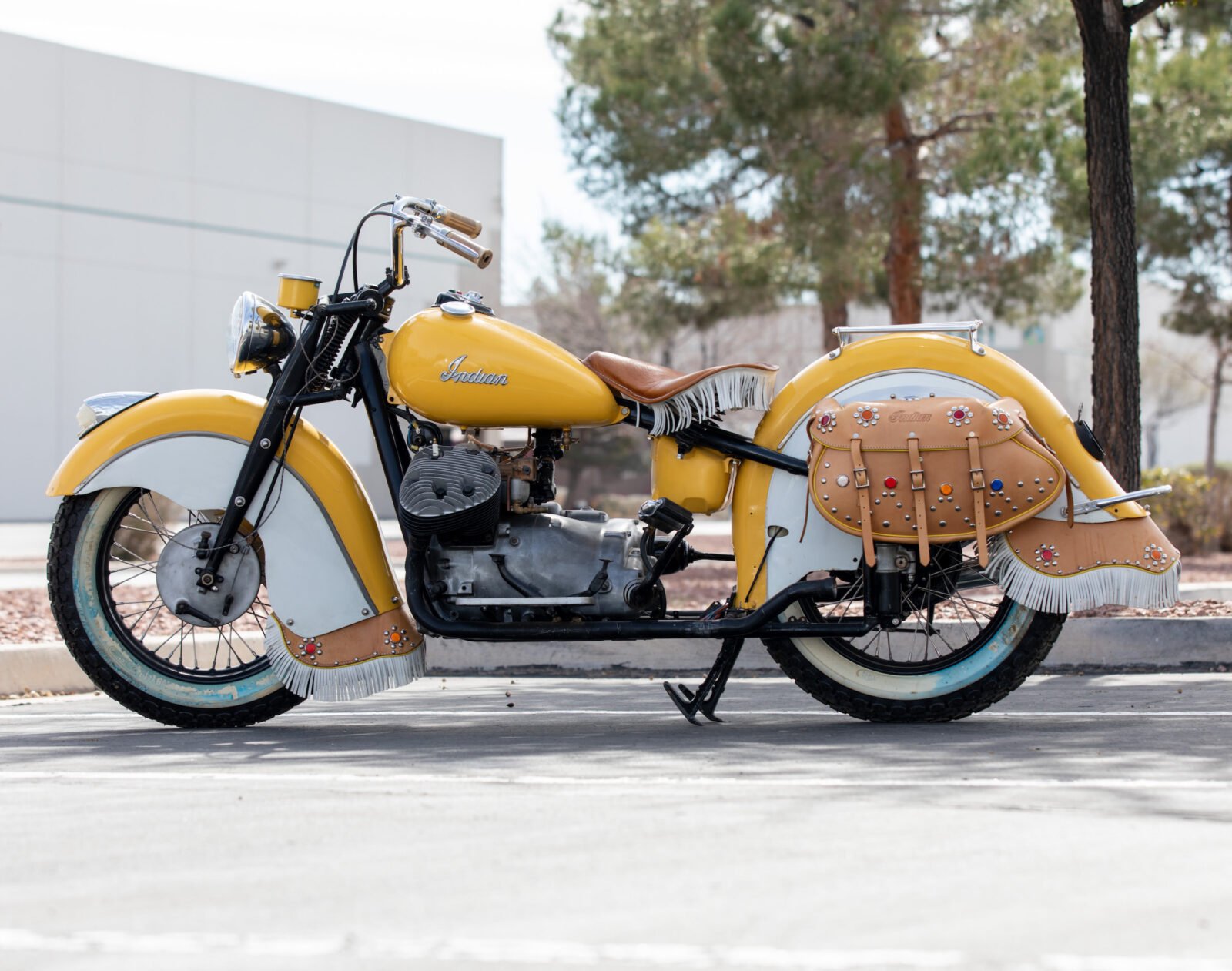 The Indian 841 was developed by engineers at Indian specifically to fight the Nazis across the deserts of North Africa. The Germans had one of the great military vehicles of WW2 in the BMW R71. This tough, reliable machine formed the backbone of German motorcycle rifle regiments, which were among the fastest of all German army units and a critical element to their successful “Blitzkrieg” (lightning war) strategy.

It was clear to the Americans that they would need vehicles capable of countering the R71, and so in 1941 the US War Department issued contracts for experimental motorcycles suitable for use in desert warfare.

Indian and Harley-Davidson both developed their contenders, the two American marques had been battling it out on race tracks around the country for decades, but now they’d be battling to win government contracts to supply mission-critical motorcycles for the war effort.

Harley-Davidson came up with the Harley-Davidson XA, this was essentially a modified Harley-Davison WLA which they had already been building for the military, with the addition of a reverse-engineered BMW R71 engine, transmission, and shaft drive.

This was a relatively safe bet from the engineers at Harley, they already knew the capabilities of the WLA and they knew their motorcycle was going to need a shaft final drive to work effectively in the desert. They also knew that the R71 powertrain was already working well in North Africa, so due to the time constraints they went with what they knew would work. 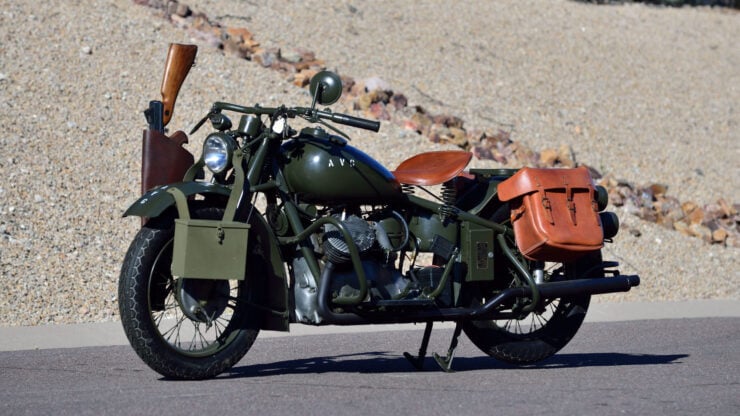 Above Image: The Indian 841 in its original military trim.

Indian engineers were far more creative. They developed a new 90º V-twin that shared some parts with their current 45º V-twin as used in the Indian Scout. The engine was mounted longitudinally in the frame rather than in the more traditional transverse manner, and power was fed from the gearbox into a shaft drive to the rear wheel.

The resulting new motorcycle was named the Indian 841 – “8” for the new engine design and “41” for the year. The motorcycle was developed specifically for military use and as such it had a very low compression engine, just 5.1:1, so it could run on low octane fuel.

The 45 cu. in. (737cc) 90º V-twin was air-cooled and it used the simple side-valve heads from the Indian Scout, power was just 25 bhp and it was fed back through a four-speed gearbox to the shaft drive. The 841 tipped the scales at 528 lbs (240 kgs) when ready to ride, and as such it did suffer a little from insufficient power – though this could be largely remedied by increasing the compression ratio.

The shifter was somewhat unusual on the 841, it used a heel-and-toe shift pedal with heel-operated upshifts and toe-operated downshifts. Indian designed a simple girder fork for the front suspension and there were plungers on the back – an upgrade over the hardtail design of the WLA.

The US Army had provided $350,000 to Indian to produce 1,000 examples of the new 841, both the Indian 841 and the Harley-Davidson XA were tested extensively by the US Army however neither was adopted for widespread use and no further orders were placed.

Much of this testing took places on deserts in Southern California across terrain that would become popular in the years after the war for hare and hound races and other off road competitions. The terrain would trigger an arms race amongst mostly British motorcycle marques to develop the best bike for reliably winning, resulting in machines like the Triumph TR6C, the Norton P11, and the Matchless G80CS. 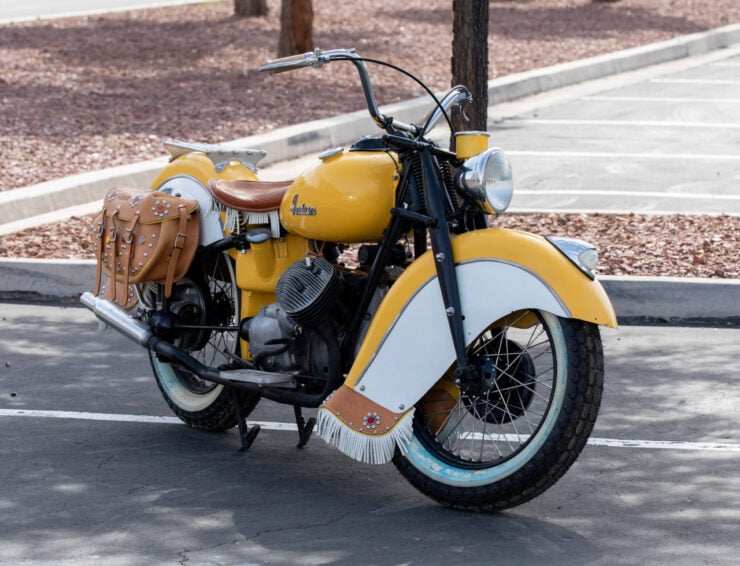 Above Image: The unusual longitudinal V-twin has its head out in the airflow for better cooling – a design that became the hallmark of Moto Guzzi motorcycles that would come later.

Once it was clear the military wasn’t going to want them, Indian sold their stock of 841s to civilians, many of whom painted them in various colors and added the bells and whistles fitted to Indian’s more famous civilian models.

The then-new Willys Jeep was proving its mettle by this time, and was more than capable of doing anything a BMW R71 could do – plus more. it would be the Jeep that would become the American answer to the R71 and as a result the 841 and the XA were relegated to the annals of history. Today they’re sought after by collectors and they make popular exhibits at motorcycle museums, however there are still a number of them being used on the road.

The Indian 841 you see here has had a comprehensive engine rebuild and the frame and tanks have been sand blasted and painted. It has an upholstered leather seat, two Indian scripted saddle bags, as well as fender flaps, new tires and tubes, and stainless steel spokes.

We don’t see a lot of these come up for sale and no one knows exactly how many have survived to the modern day. This one is being sold on a bill of sale and is listed as being not for highway or public road use. It’s clear that it will need some recommissioning before riding is attempted and the wiring loom in particular will need attention.

If you’d like to read more about it or register to bid you can click here to visit the listing on Mecum. At the time of writing there’s no price estimate. 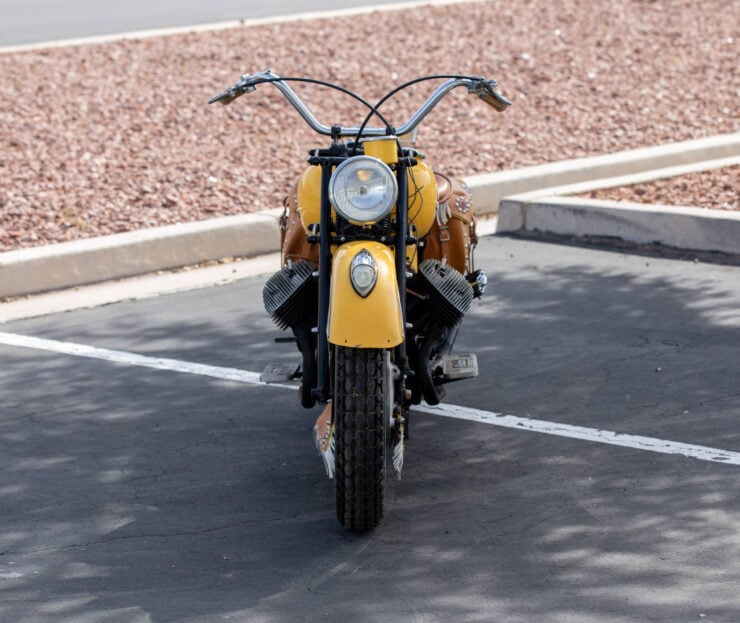 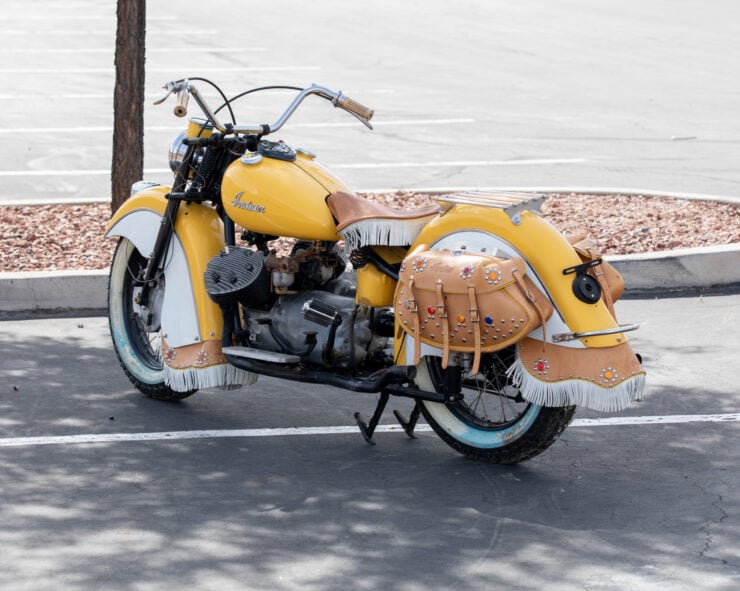 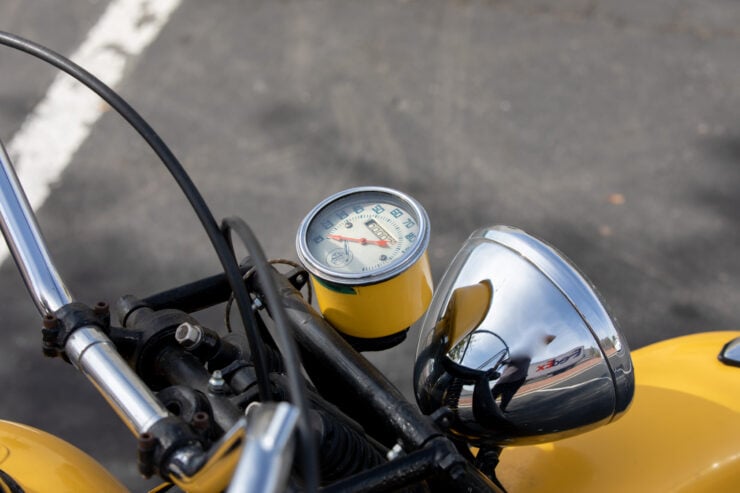 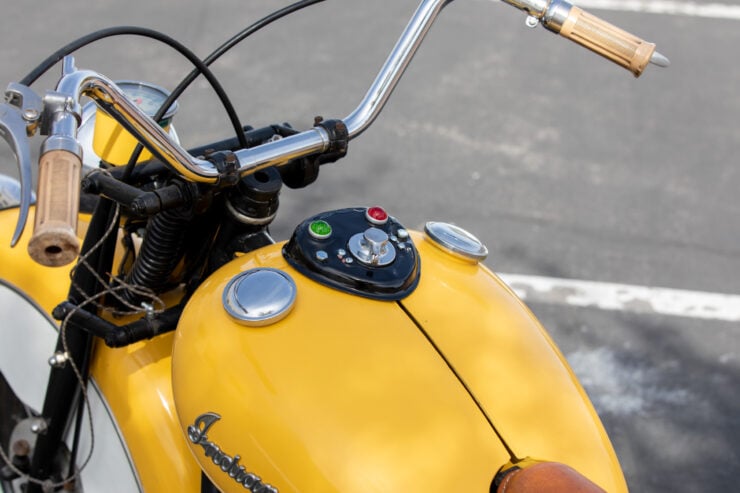 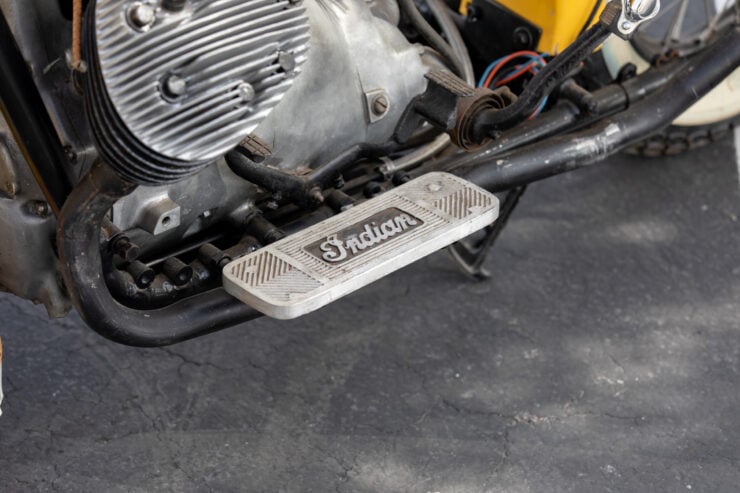 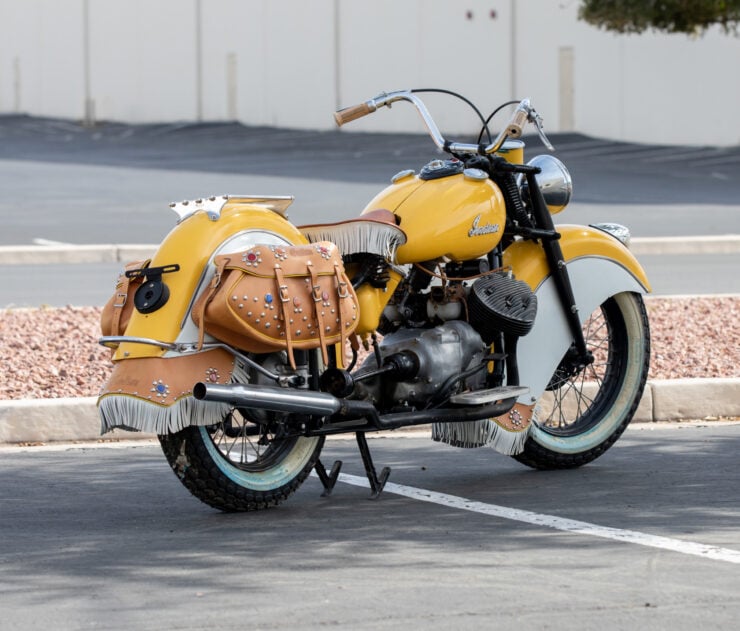 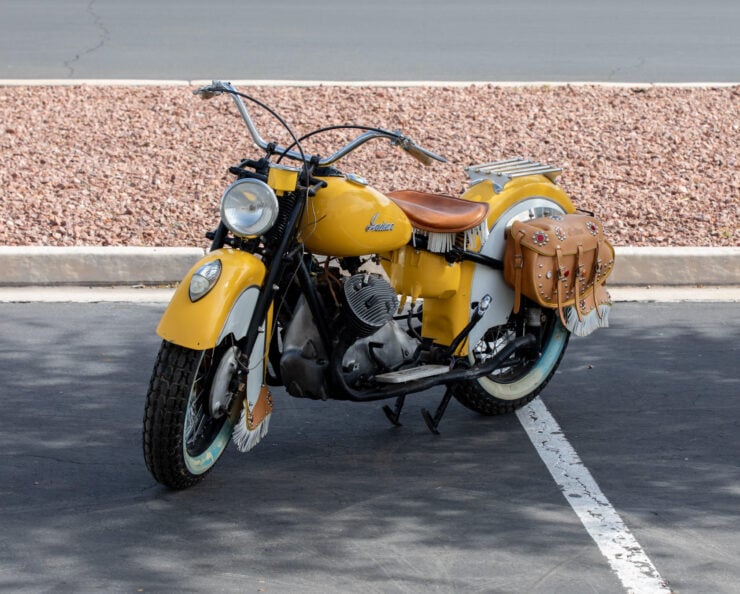 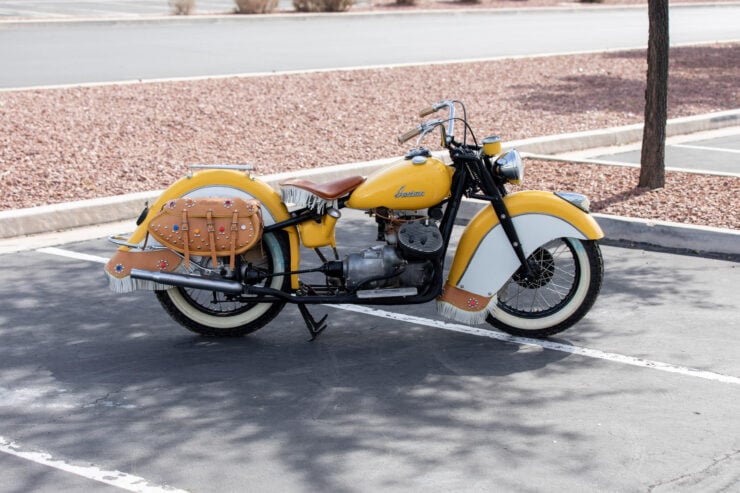 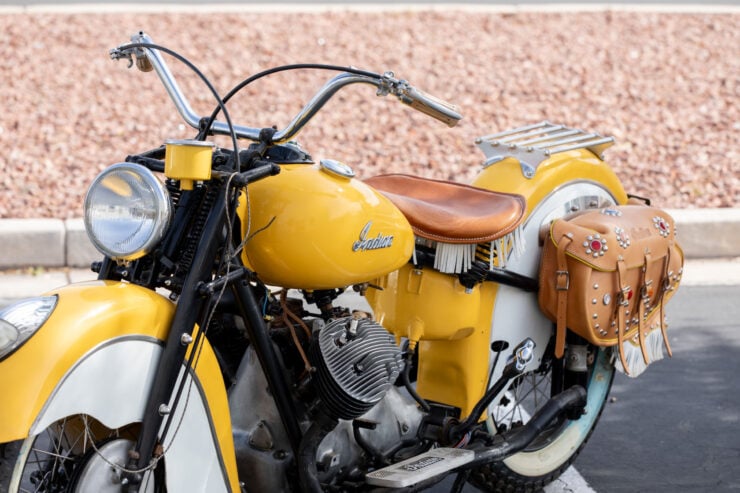