Blitz Motorcycles is one of the original modern custom garages, they’ve been building their signature custom bikes in Paris for almost 10 years now, in a secret location near the heart of the city.

The bikes built by Blitz founders Fred and Hugo are immediately recognisable, they’ve been shipped to clients all over the world and the 1984 BMW R80 RT you see here is their latest creation.

It was built for a client who had only one request – that it have a discreet onboard sound system that could play the sound of a Star Wars Tie Fighter at the click of a switch. This request was made as a result of the client’s career – he’s spent over 25 years working in the sound design industry.

A BMW R80 RT was chosen for its resilience and its extensibility. The R80 RT had only been first released two years before this example was made, it was a sport touring bike fitted with the same basic engine as the Paris-Dakar Rally winning BMW R80 G/S – the BMW Type 247 engine.

The Type 247 has two overhead valves per cylinder operated by rocker arms and pushrods. The pistons are horizontally opposed with the cylinders and heads out in the cooling airflow, an engine orientation that’s worked well for BMW for close to 100 years.

With this single request in mind Fred and Hugo decided to build a jet black custom BMW with influences from retrofuturistic films like Gattaca, Tron, Blade Runner, Akira, and of course, Star Wars. The sound file was provided by the client, the Blitz boys then developed a bespoke minimalist sound system inside the starter cover with 2 x 20 Watt speakers, a mini amplifier, and a small computer linked to the camshaft so the sound effect will match the engine speed.

BMW developed an aerodynamic fairing in a wind tunnel for the R80 RT, it was one of the first of its kind fitted to a production bike. Although the bike couldn’t compete with the technical sophistication of the Japanese bikes which had risen to dominate the global motorcycle market place in the 1980s, the BMW did have character – and a fundamental design that would stand the test of time, outliving many of its Japanese rivals.

Once Fred and Hugo had settled on which bike to use they rebuilt the engine, Fred is a certified motorcycle mechanic and all Blitz custom builds get a thoroughly sorted engine as a result. The original fairing and much of the bodywork was removed as it was no longer needed – this was going to be a lighter and more nimble machine, much like the Tie Fighter.

A new front wheel was CNC machined and a pair of covers were fabricated for the rear wheel. As with almost all Blitz builds, the original fuel tank was removed and replaced with a unit from another motorcycle – in this case a vintage Honda 125cc tank was chosen.

As a hat-tip to Gattaca, a green headlight insert was fitted, along with a series of green LEDs around the body – in the film the cars all had green headlights.

Due to the space-related theme it was decided to paint the frame, engine, wheels, and fuel tank jet black. The rear frame loop was cropped and fitted with a matching low profile black seat. The original monoshock rear was replaced with a more modern unit offering full adjustability, with a black spring to match the theme of the bike.

The Bing carburettors were rejetted to suit the new velocity stacks fitted to each side, and a custom 1-into-1 exhaust was built with the single small muffler exiting on the left side.

The completed bike was named Black Dot Mark One and it’ll certainly never fail to turn heads when it rolls down the street, largely because it looks like it just escaped from a William Gibson novel. Blitz are already hard at work on a version 2.0 of this build and we’ll bring it to you just as soon as it’s ready.

Above image: Fred from Blitz Motorcycles

All images courtesy of Daniel Bérès 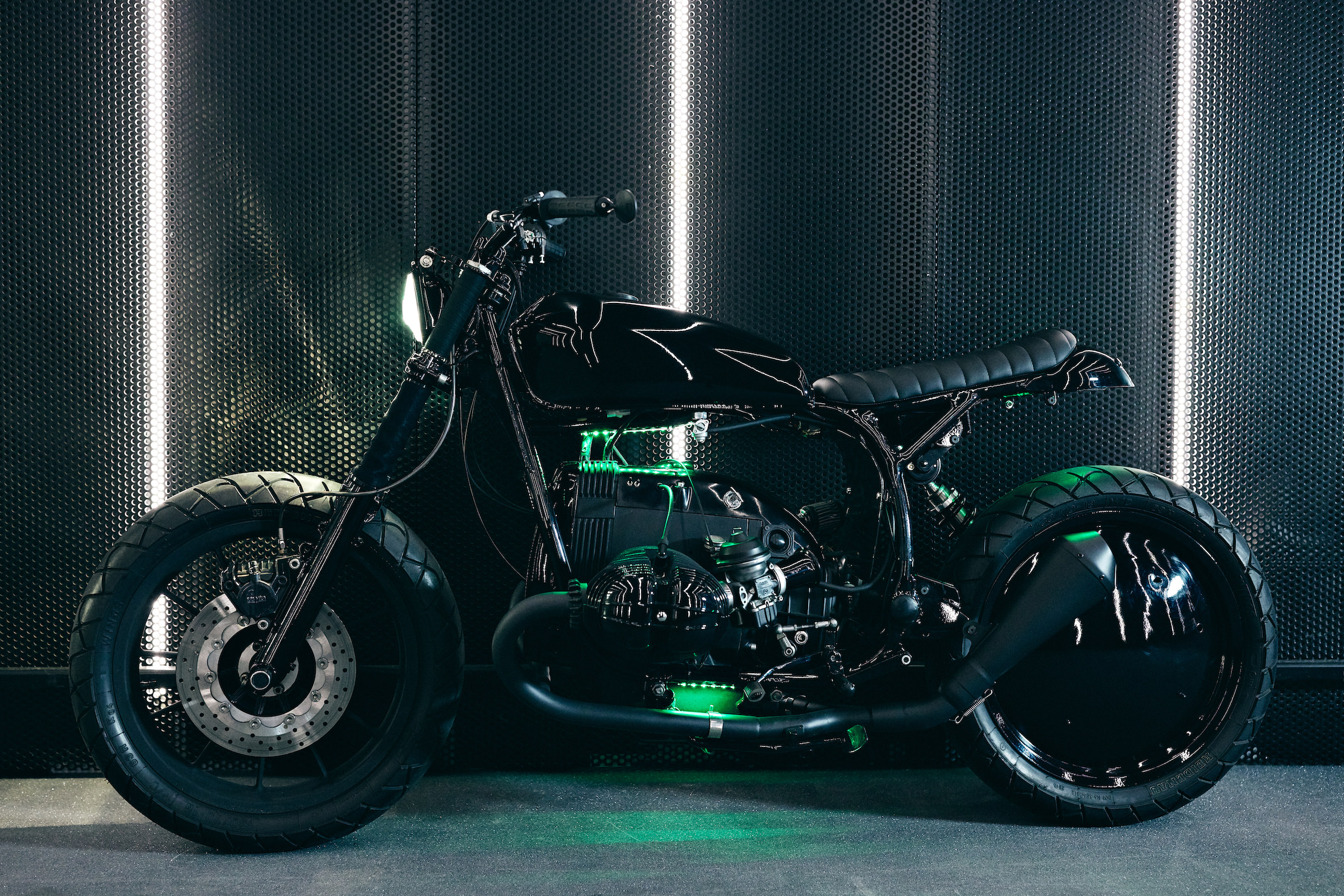