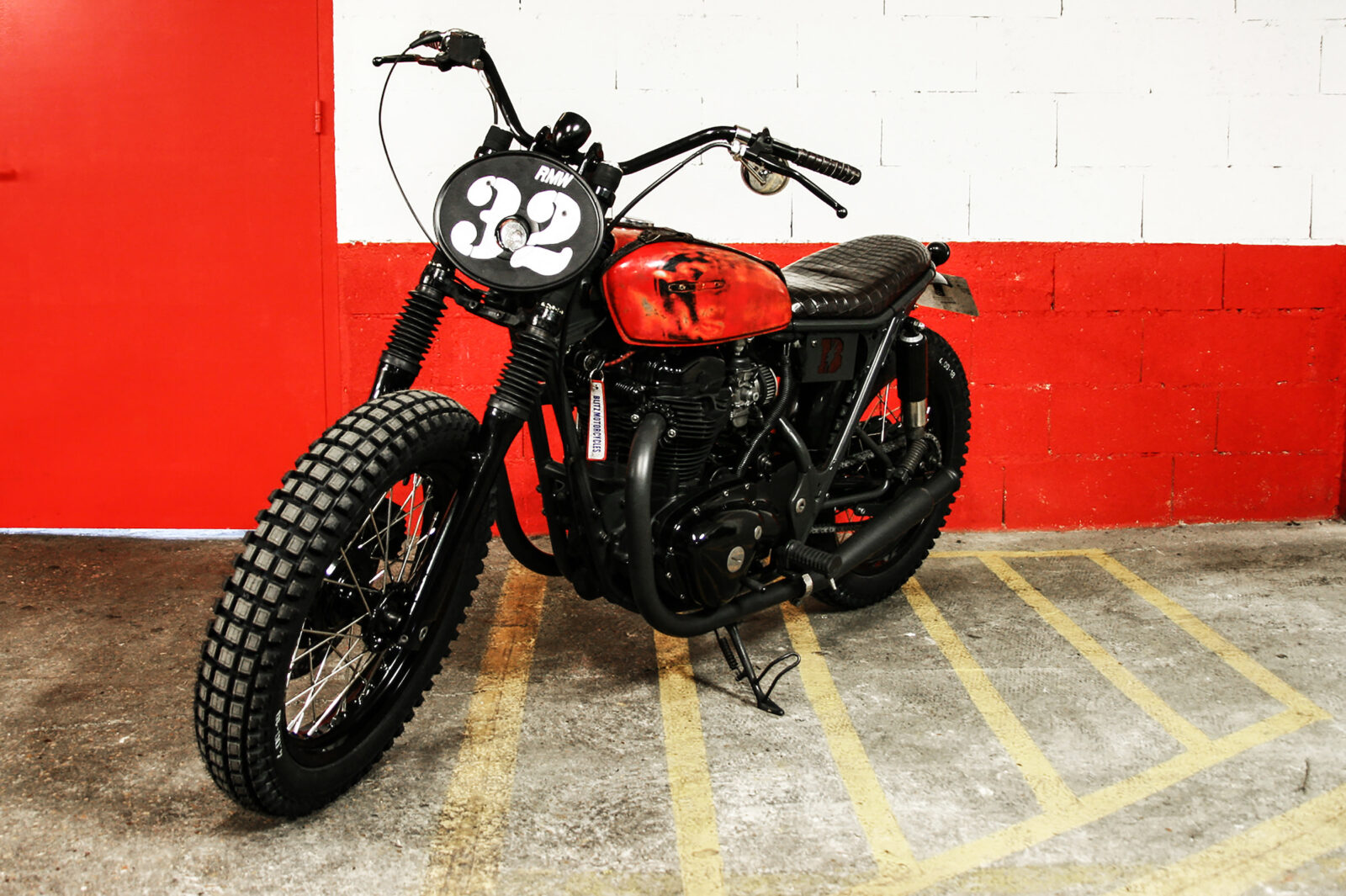 Blitz Motorcycles is a bespoke motorcycle garage that needs no introduction. They’ve been building some of the most immediately recognizable custom bikes anywhere in the world for years, and they’ve inspired everyone from home garage bike builders to professionals, whilst having some of their creations showcased in art galleries, museums, and more recently, Harrods.

Blitz is run by the friendly French duo of Fred and Hugo. They’re based in Paris, tucked away in a garage you’d never find unless you knew exactly where to look, and their builds look like what you’d expect if Hunter S. Thompson and Mad Max joined forces to create motorcycles for traversing the Gibson desert in 1972.

This is almost certainly why Australian clothing company R.M. Williams approached Fred and Hugo this year to build them a custom parallel twin – the engine type frequently favored by the Australian Jackaroos (cowboys) of the mid-20th century. In Australia, R.M. Williams is best known for their leather boots, for decades they’ve been worn by farmers, jackaroos, and blue collar workers – but in more recent years they’ve begun to find favor with folks who live in the big smoke.

Once the team at Blitz Motorcycles knew their starting point was going to be a parallel twin they had to decide which twin to choose – they settled on the Kawasaki W650 because it offers modern reliability with an internal architecture that implements both standard parallel twin structure and a shaft-driven bevel-gear overhead camshaft – just like the popular single-cylinder Nortons of the 1940s and ’50s. 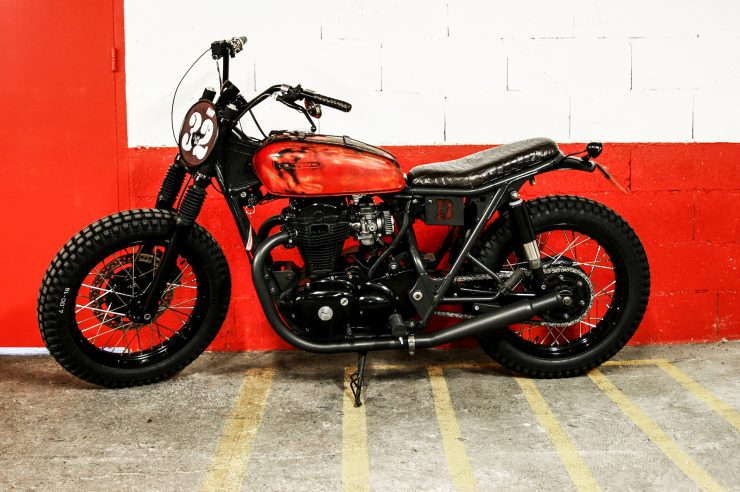 The build began as they all do, with a full teardown and inspection of parts. The rear subframe was shortened and a new seat pan was created – which was then sent to R.M. Williams in Australia along with the clear-coated Honda fuel tank. The leatherworkers Down Under used local Australian crocodile leather to upholster a new seat and tank harness, then sent it back to Paris with additional leather included so Fred and Hugo could wrap the grips.

A new battery box was welded in under the seat and fitted with a lightweight lithium iron phosphate battery, a new wiring loom was created, and Mini Switch handlebar controls developed in-house by Blitz. The decision was made to stick to a black and red color scheme for the new bike, as a hat-tip to the famous Australian Redback Spider, so the Honda fuel tank kept its distressed red paint and the engine, frame, exhaust, wheels, and handlebars were all painted flat black.

The original headlight was removed and replaced with a high-intensity LED sitting inside a racing number plate with the number “32” displayed, referencing the year that R.M. Williams was founded – 1932. A discrete pair of LED blinkers were installed around the fork tubes, though you’d be hard-pressed to see them without looking closely.

A new pair of enclosed shock absorbers were used on the back, with a pair of fork gaiters fitted up front – suspension is notoriously susceptible to the fine red dust of the Australian desert.

The build was finished off with a set of vintage Triumph handlebars and a low-profile mini speedo, and knobby tires were fitted front and back. The completed bike is just as happy thumping across the wilderness outside Alice Springs as it is navigating the streets of Saint-Germain. If you’d like to see more from Blitz Motorcycles you can click here to visit their website, and if you’d like to see the Scrambler Boot created by R.M. Williams to celebrate the build you can click here. 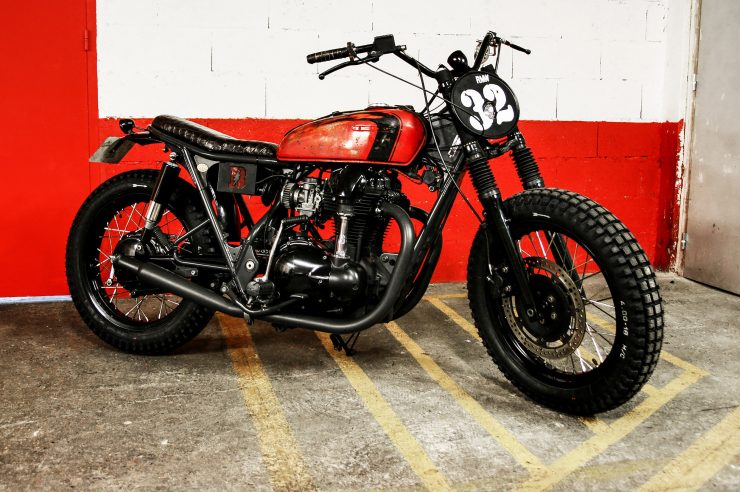 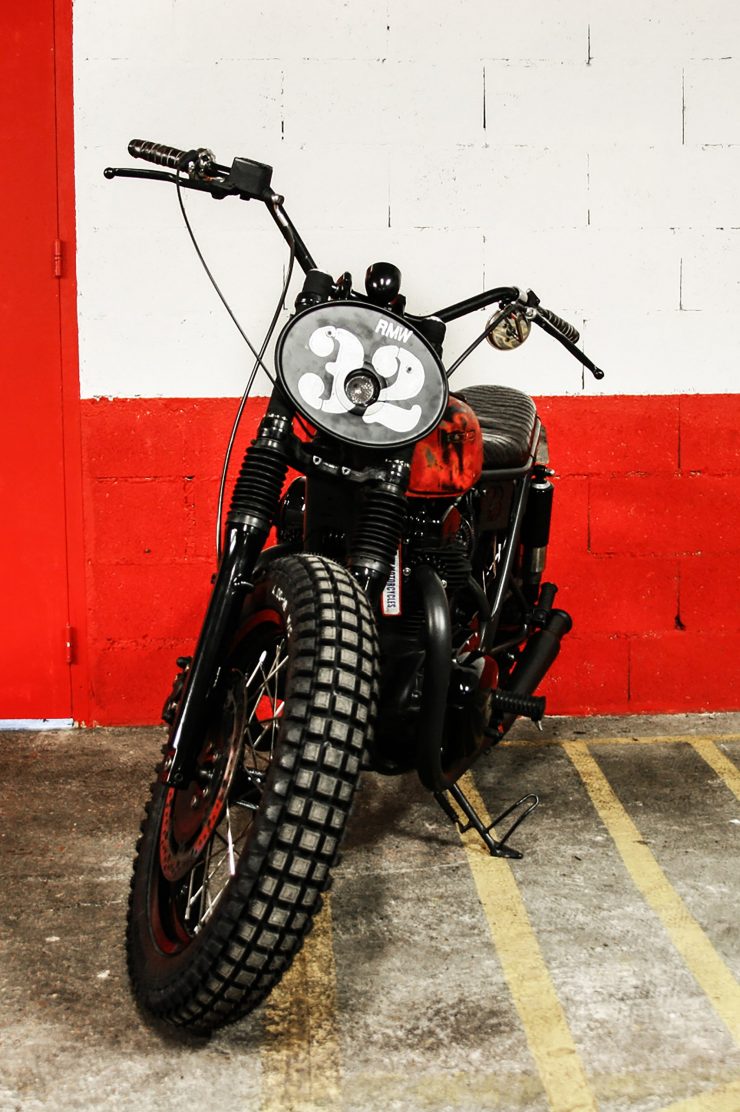 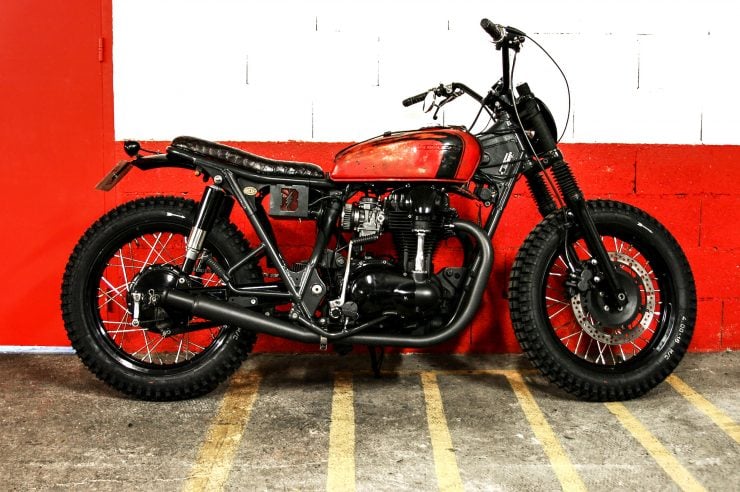 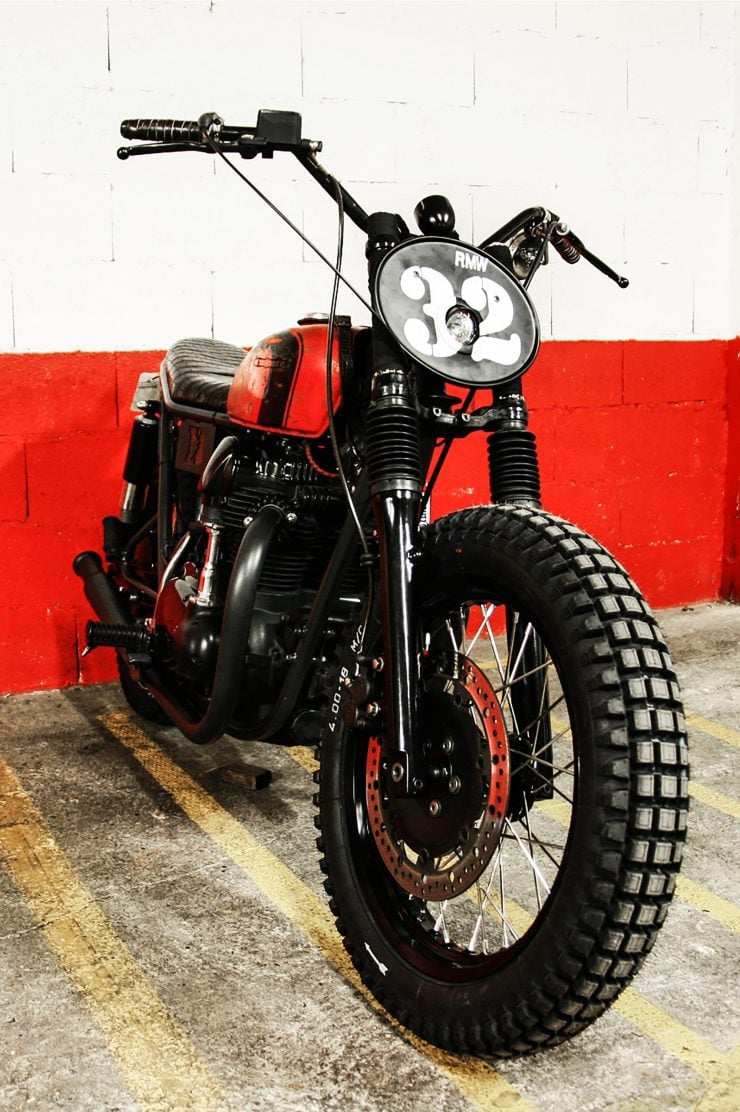 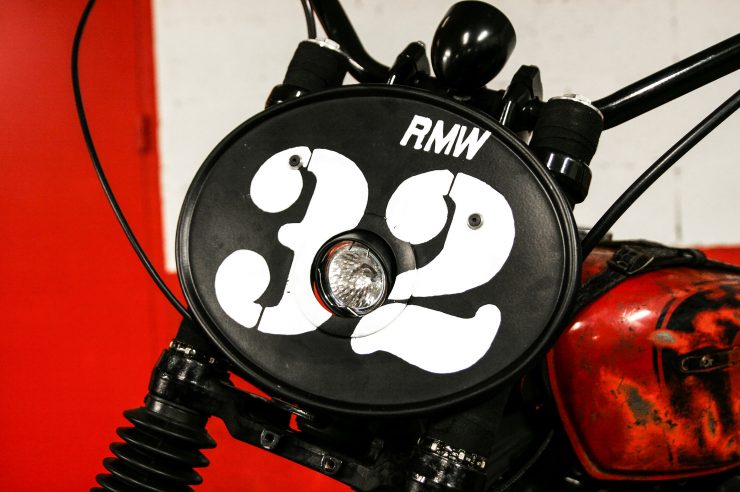 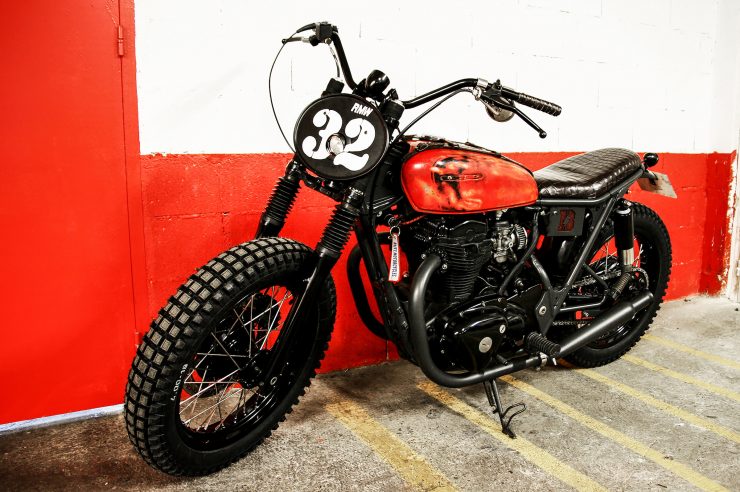 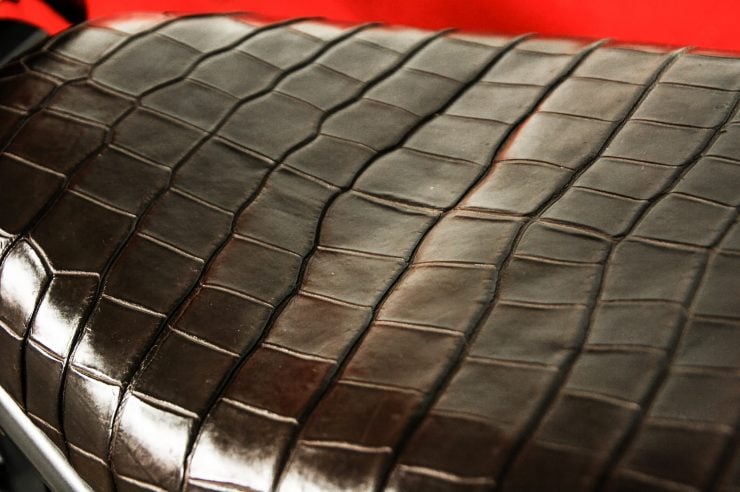 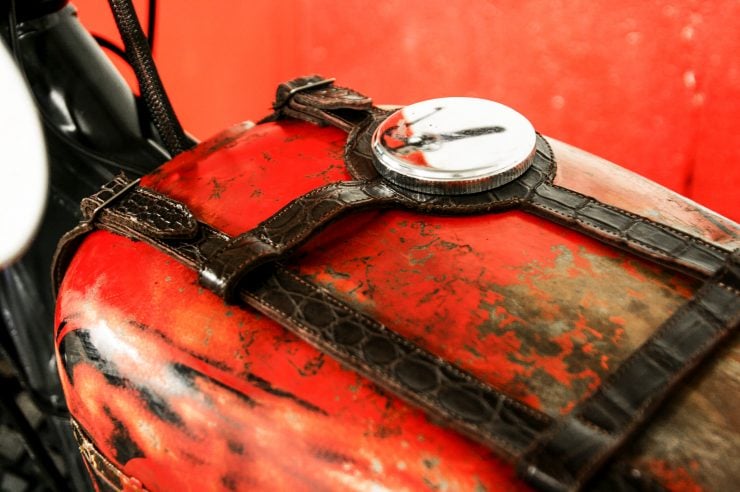 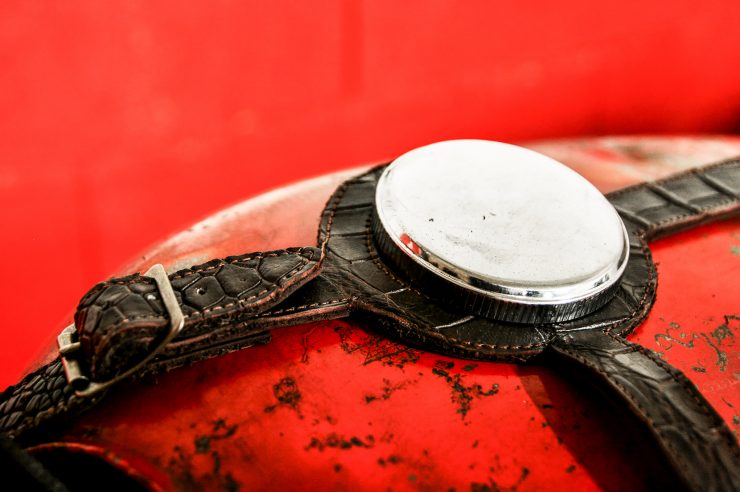 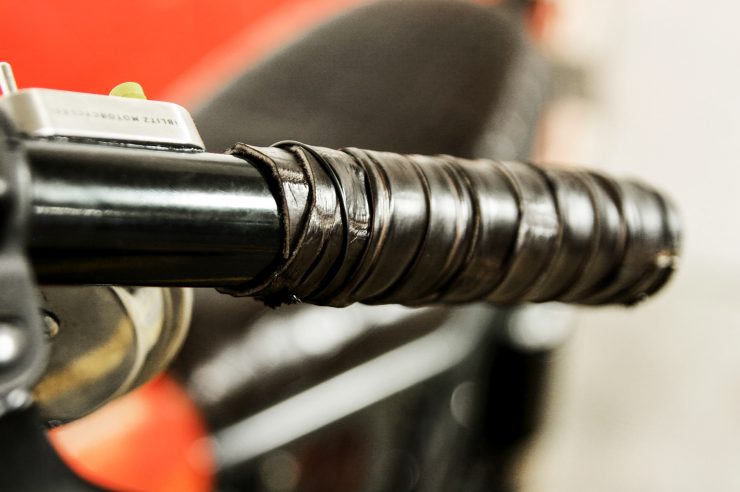 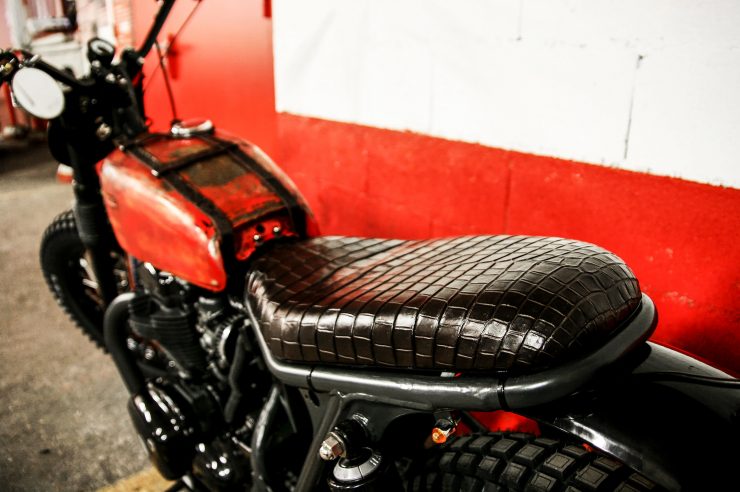 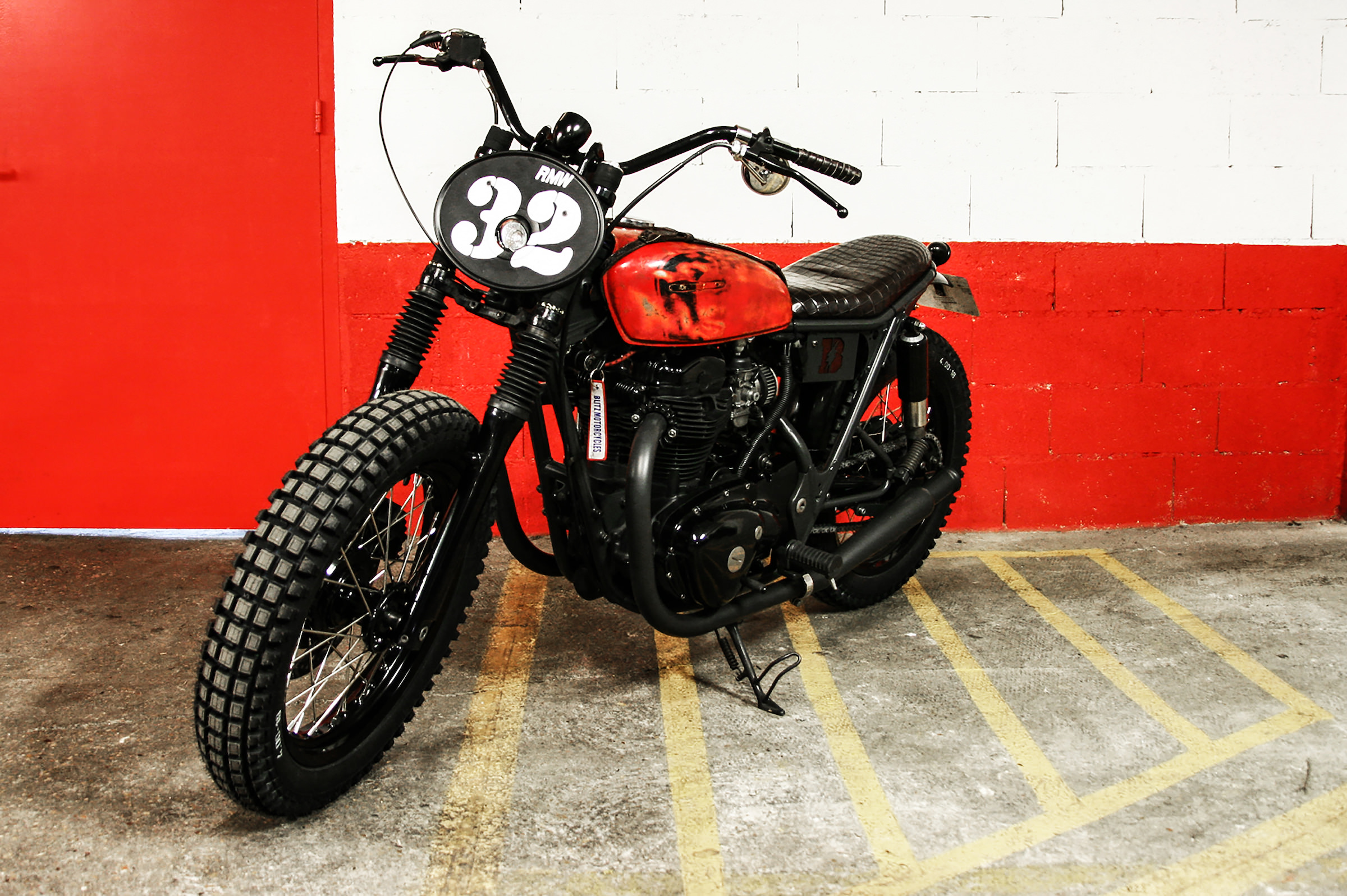