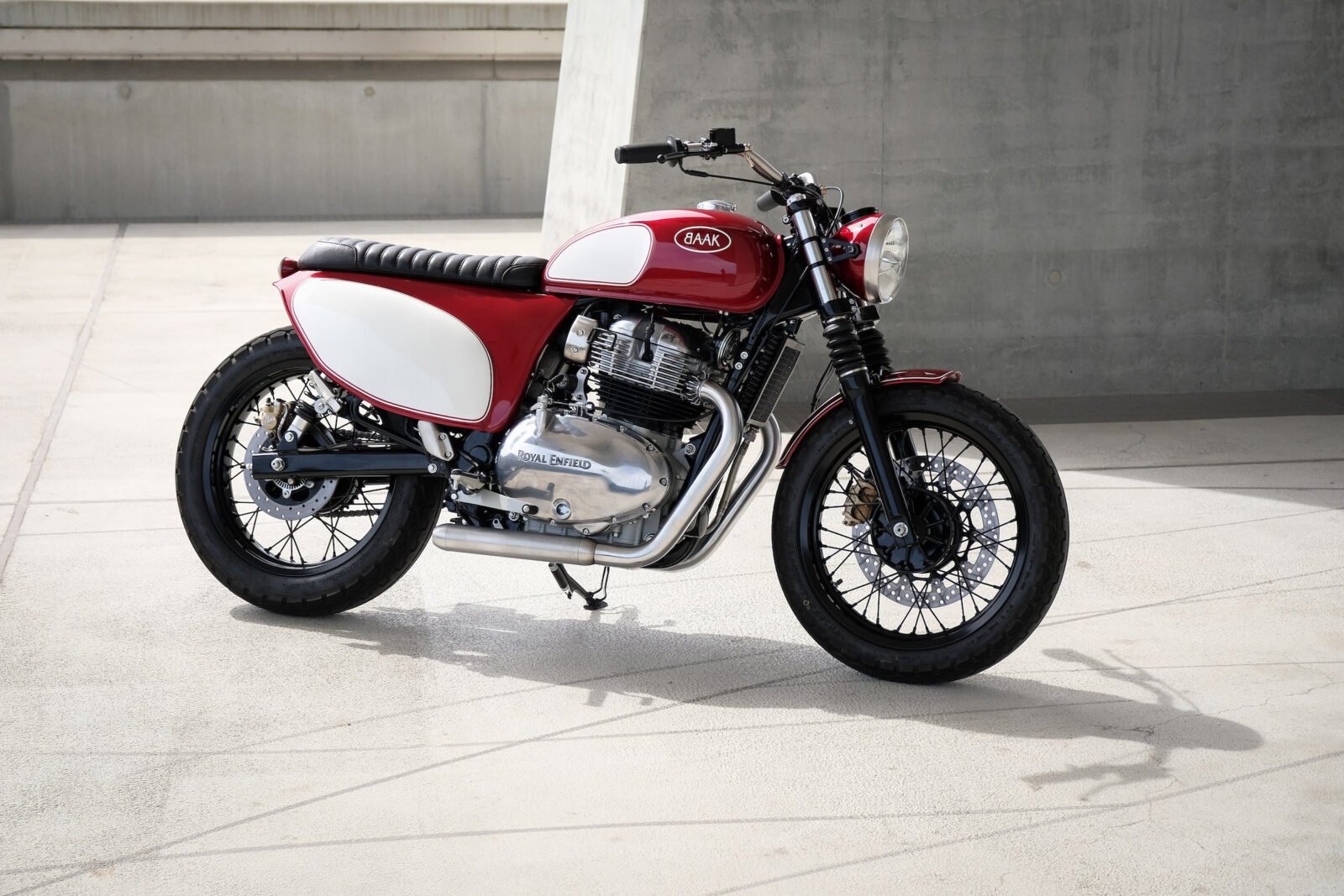 The Royal Enfield 650 Interceptor was released in 2018 and as such, we haven’t seen a large number of customs yet due to its relative rarity. That said, Royal Enfield have provided a small number of Interceptors to prominent custom motorcycle garages as a way of showcasing the extensibility of the new model.

For the uninitiated, the Royal Enfield 650 Interceptor is the biggest project ever undertaken by the Indian (formerly British) company, who are better known for the tough, air-cooled single cylinder motorcycles. The 650 was developed at the Royal Enfield R&D centre in England, and the company headhunted some experienced names from other motorcycle makers with more experience in building complex modern motorcycles with engine capacities over 500cc.

The new 650cc engine is a parallel twin with a single overhead cam, there are 4 valves per cylinder, a gear-driven balance shaft ahead of the crank, a 9.5:1 compression ratio, and an oil-cooled head with the cooler mounted between the frame down tubes. The engine is of unit construction with a 6-speed gearbox and a built in slipper clutch, with a chain final drive. 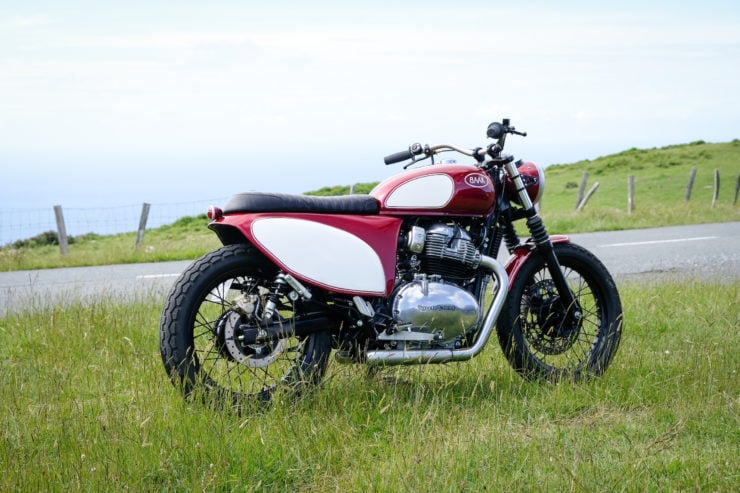 Front and rear suspension are traditional with standard forks up front and twin shocks in the rear, disc brakes are fitted front and back and ABS comes as standard. Those who have had a look inside the engine state that it’s been designed for future upgrades including bigger bores, longer strokes, and more power – so there’ll be plenty to keep owners interested in the years to come.

When Royal Enfield sent a 650 Interceptor to the team at Baak Motocyclettes it was to serve two purposes, to be a platform that the team could use to develop prototype and final production custom parts for sale to the general public, and to serve as one of Baak’s most eye-catching custom motorcycles to date.

Royal Enfield 650 Interceptor Custom was built over the course of almost a year by Baak Motocyclettes based out of Lyon, France. Baak is both a custom motorcycle garage and a creator of bespoke custom parts for motorcycles from Triumph, BMW, Moto Guzzi, and now Royal Enfield.

The plan for this build was to evoke the styling of classic British bathtub fairings used on a variety of classic iron in the 1950s and ’60s. This is a different direction to most modern custom motorcycles were the focus is often on removing parts and weight loss for performance gain.

The single biggest element of the build is the one-piece rear “bathtub” fairing. It was fabricated by hand from aluminum alloy after an initial template was made from cardboard to get the shape right. A series of smaller parts were used and then TIG welded together, then sanded, finished, and painted. 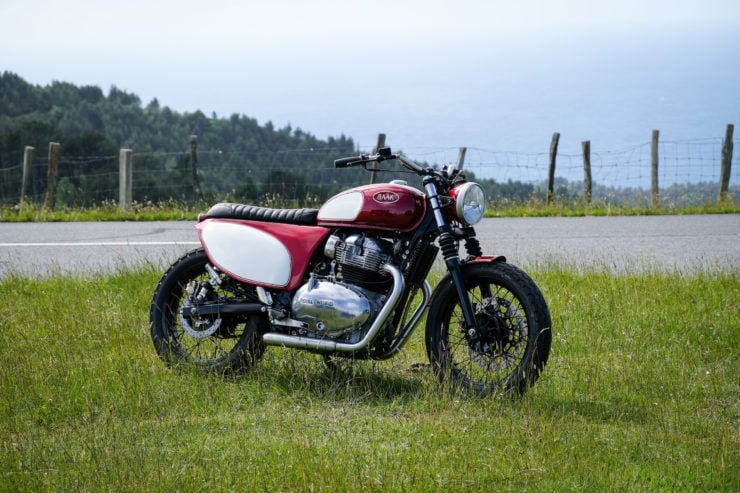 The original headlight was swapped out for a modified Lucas P700 with a Motogadget speedometer embedded in the headlight cowl as was tradition among many British motorcycle manufacturers in the 1950s. The headlight was attached with aluminium headlight brackets that have integrated LED indicators, and a Bates style tail light is fitted to the rear.

To improve handling a little a pair of Big Body shock absorbers by Shock Factory were fitted in the rear and a pair of Dunlop Roadmaster tires were added for good all-year grip.

The completed build is exceptionally well put together and it has a unique look that I suspect is going to be quite influential on other bike builders going forwards. 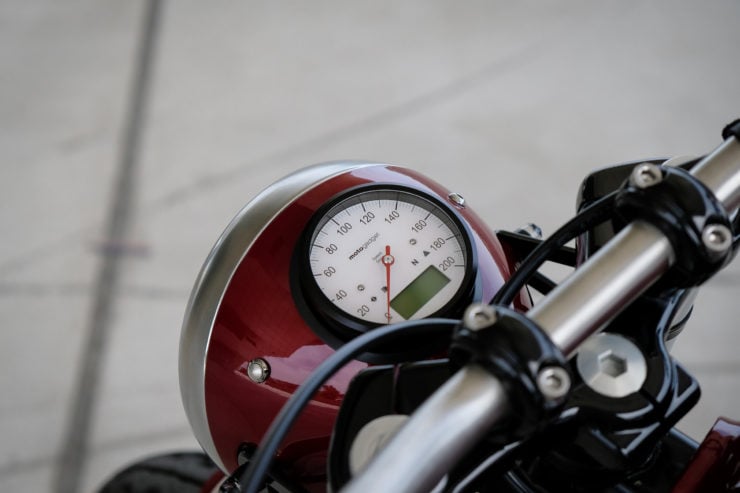 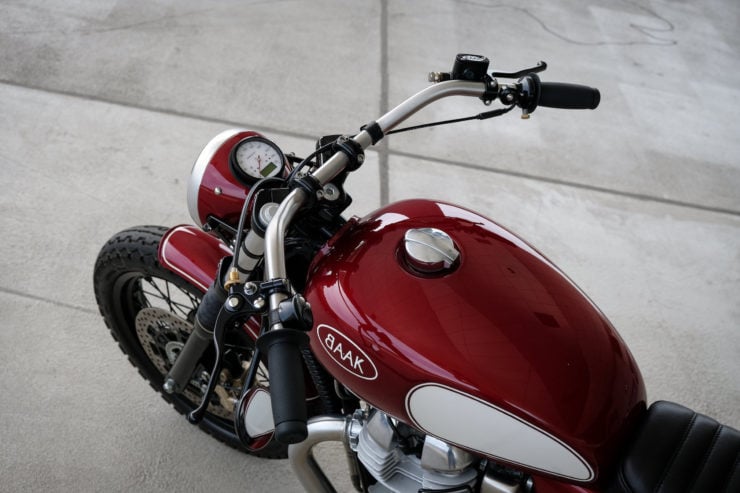 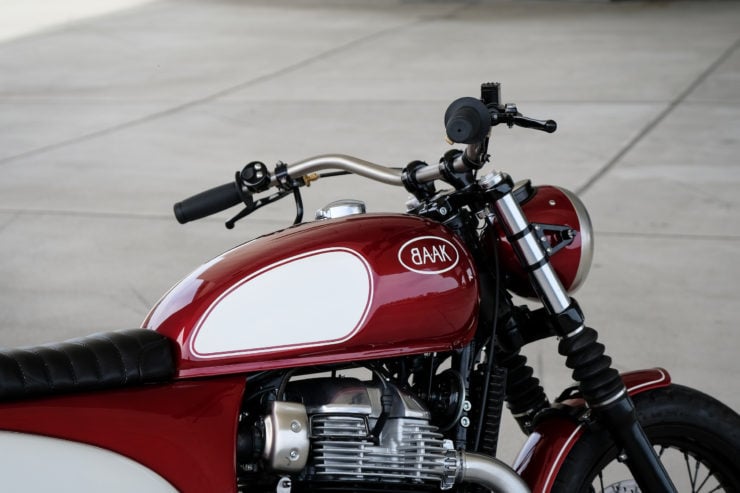 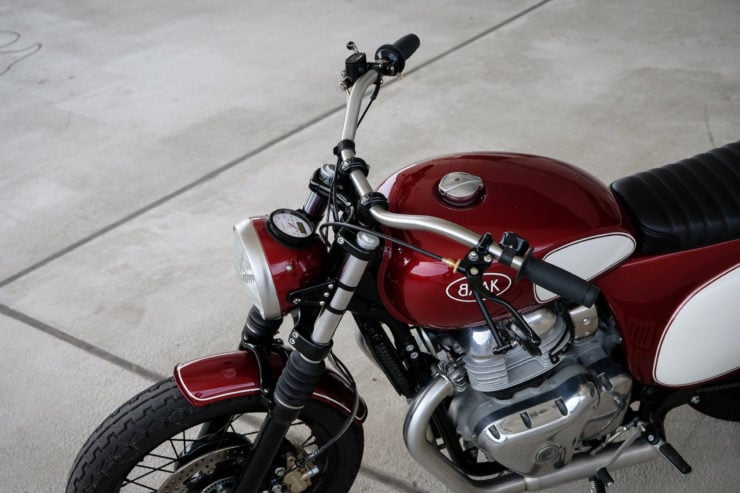 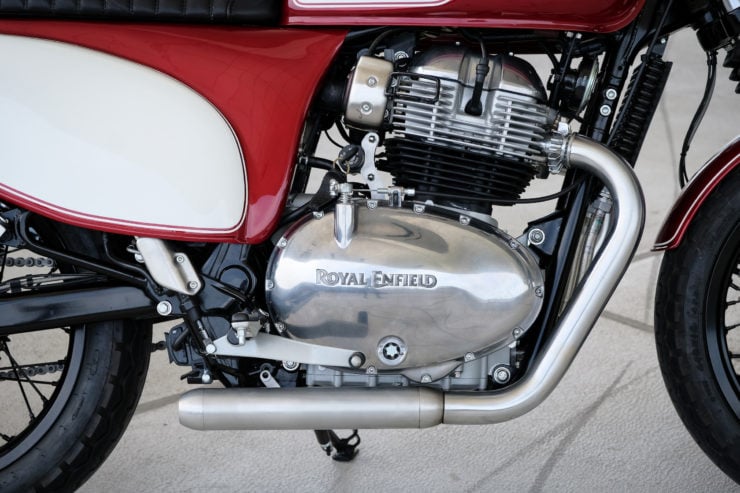 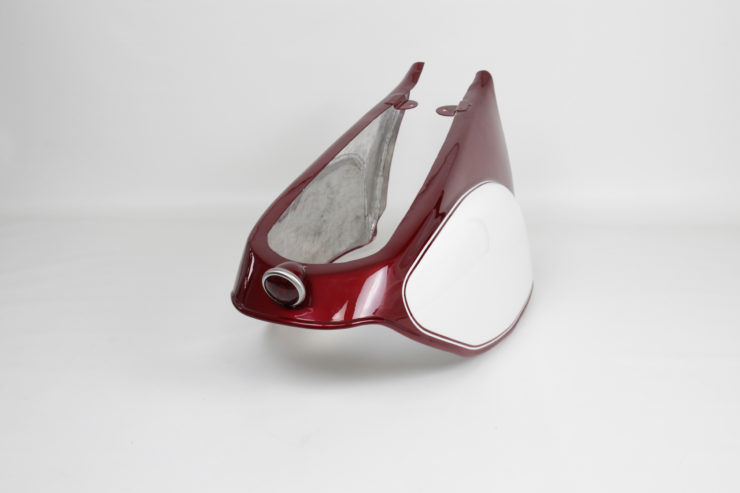 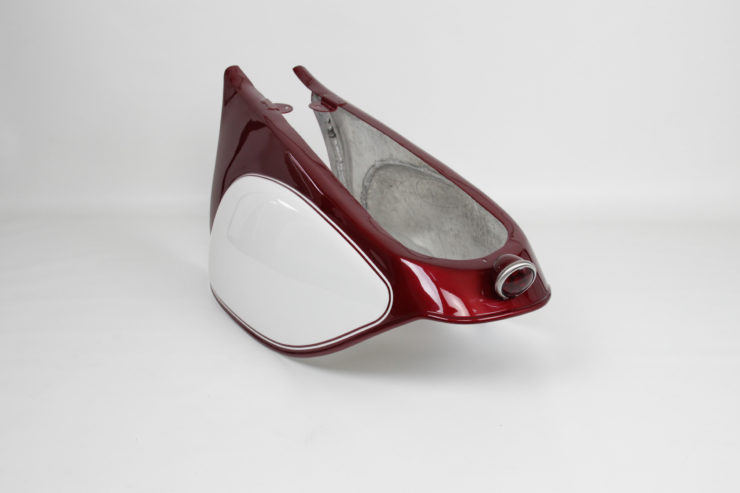 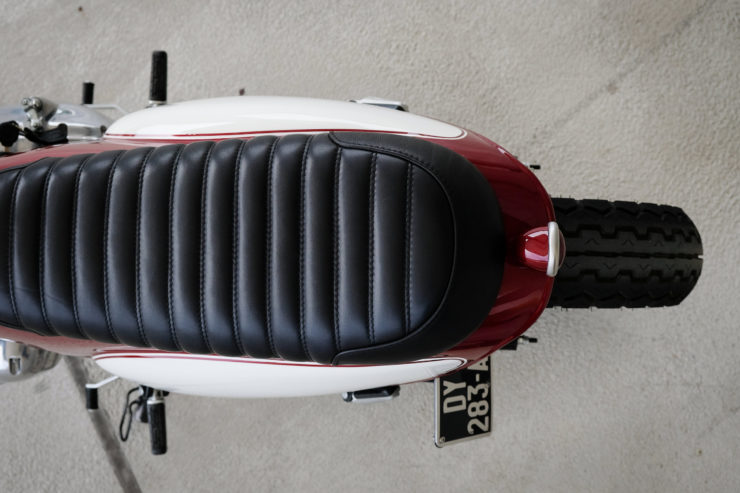 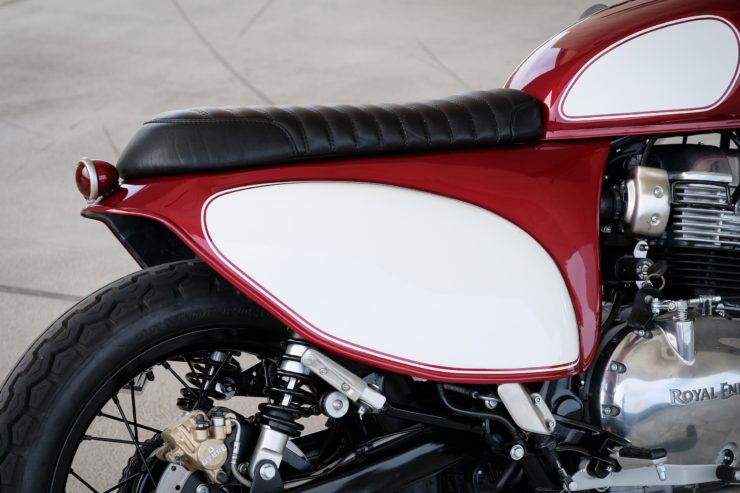 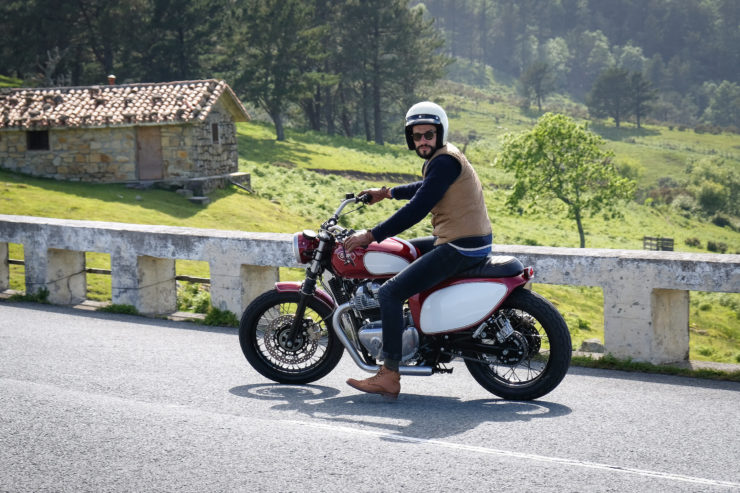 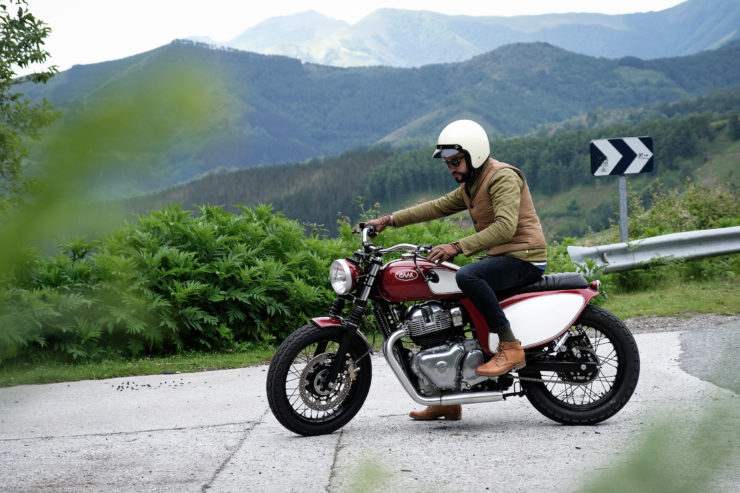 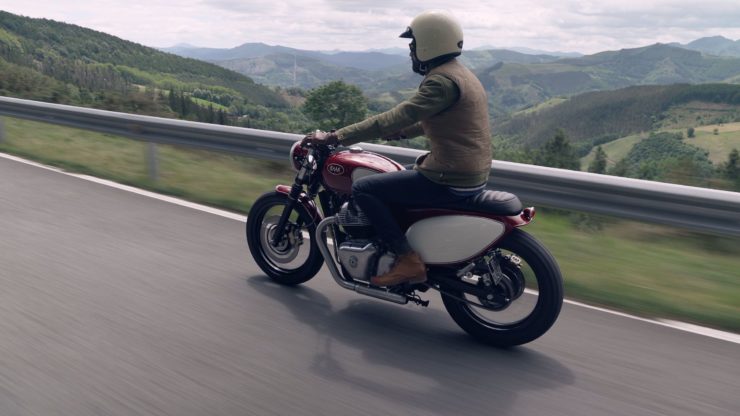 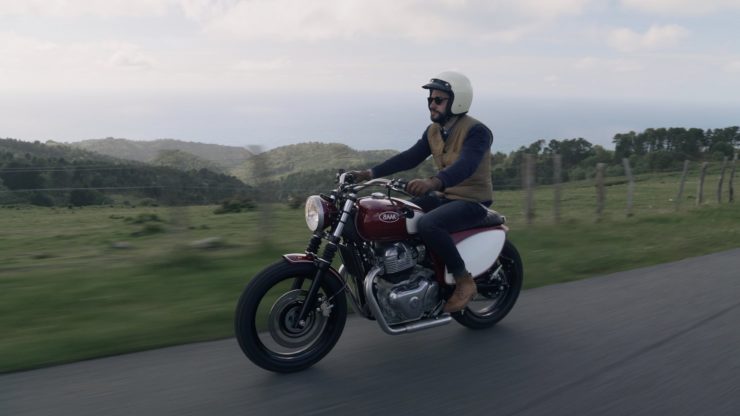 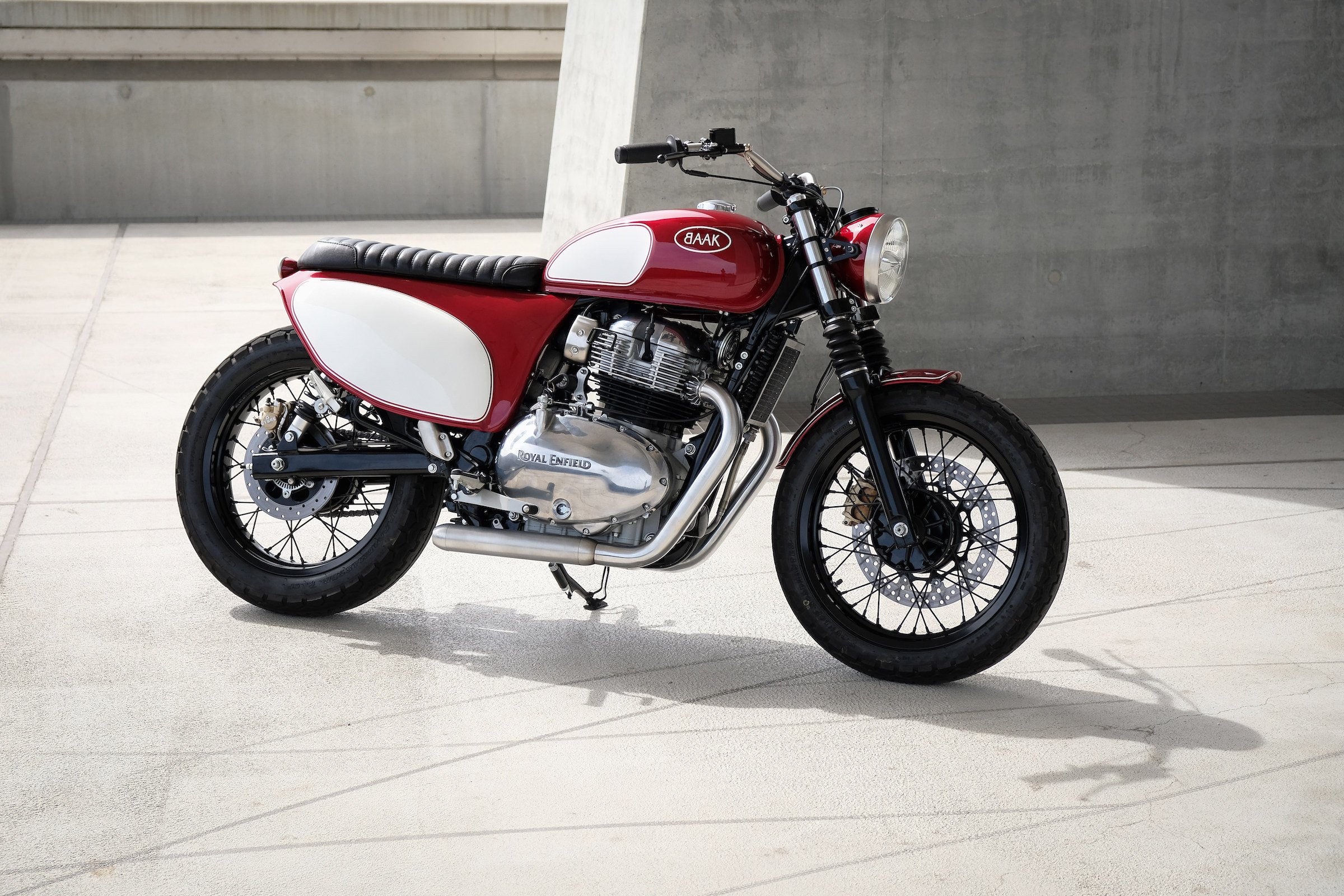