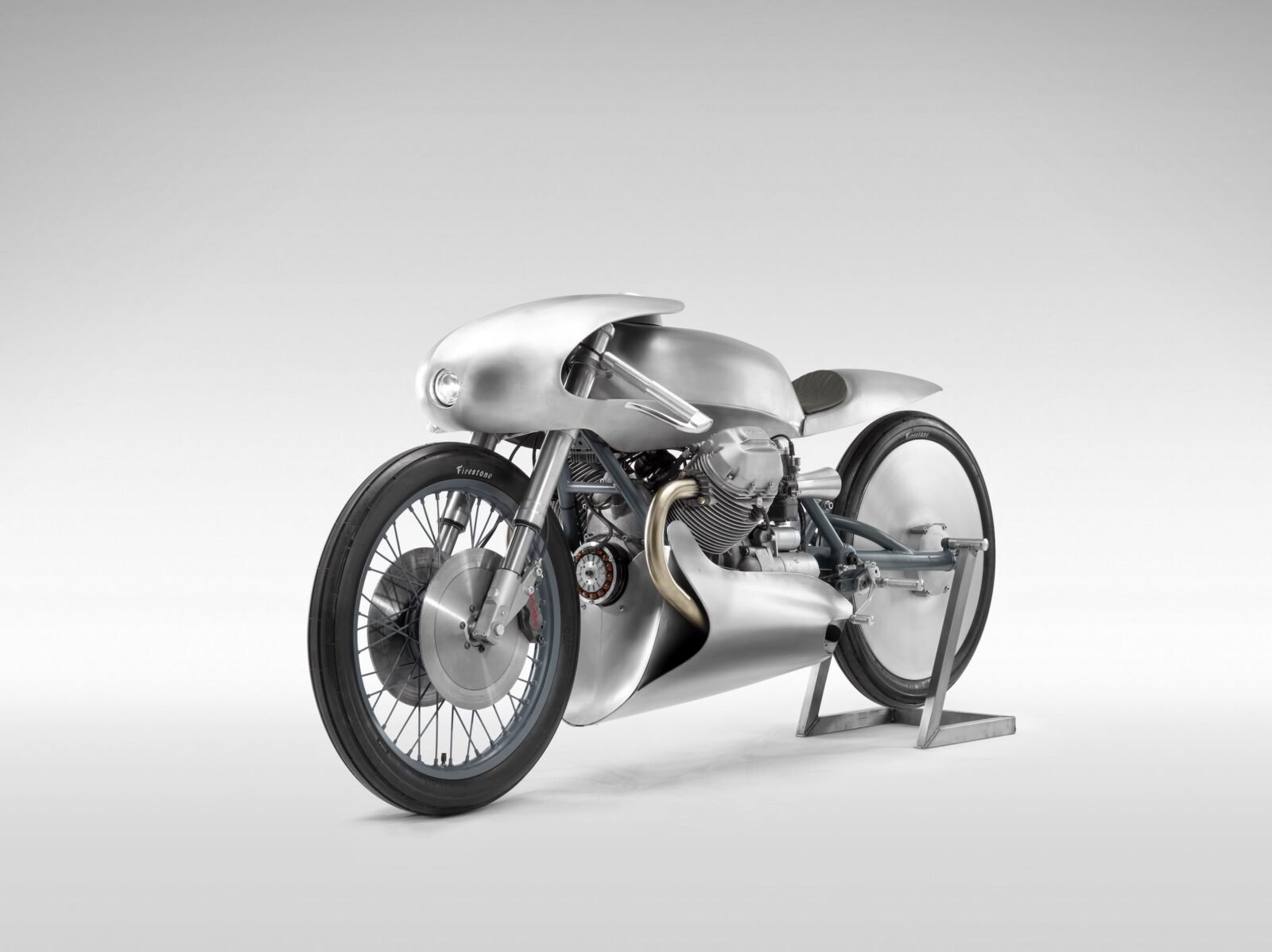 This feature was written by James Hilton, the proprietor of Death Machines of London. When possible we like to give custom builders the opportunity to tell the story of their bike, to give an insight into their thought process and methodology.

Designed in memory of Giovanni Ravelli: WW1 fighter pilot, motorcycle racer, and one of the founders of Moto Guzzi. Inspired by one of Giovanni’s biplanes and the Futurist movies of the time, Airforce has been released on the birthday of the aviation pioneer.

From the hand formed bodywork, to the aviation inspired chassis and wheels, Ravelli’s influence has shaped Airforce. In fact, pretty much every design decision began with ‘what would Giovanni do?’.

The donor motorcycle, a 1982 Moto Guzzi LeMans Mk2, was discovered in a yard in southern Italy, having been involved in an argument with a truck. Left outside, it was quietly corroding away in the sun and salty air.

Despite its condition the potential was obvious and upon delivery back to our works in London, the strip down began. The engine was found to be in remarkable condition, with no major problems discovered. A full forensic inspection, vapour cleaning & reassembly, along with replacement bearings, seals gaskets completed the main engine work. The cylinder heads were subjected to a total refresh, along with our signature gas flowing. Carburation is through a pair of modified 36mm pumper Dell’Orto carburettors. The package is completed with our in-house velocity stacks and open slash cut headers. 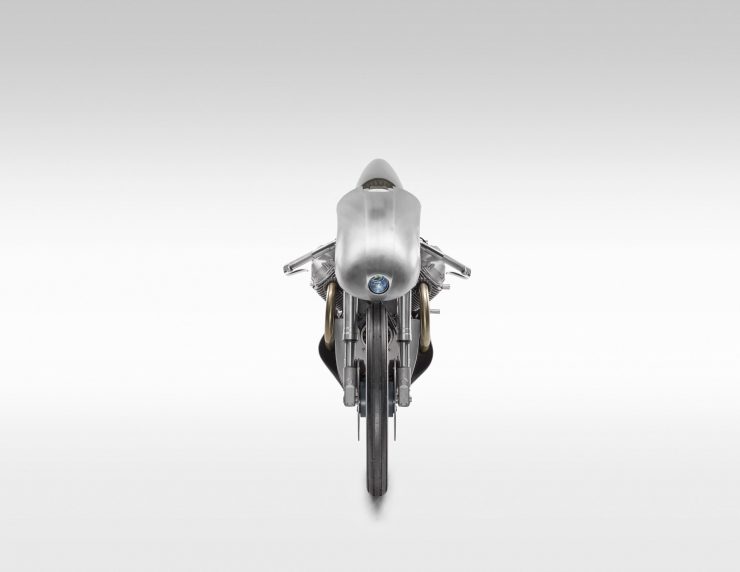 Guzzi’s legendary ‘Tonti’ frame works. That is a fact. They handle well, you pick a line and they follow it, so any modification had to be limited. Our ‘what would Giovanni do?’ version of ‘limited’ was to radically modify, in the spirit of those pioneering times of course. Giovanni would have approved. As well as the obligatory de-lugging and subframe modifications, a custom in-house head stock was manufactured, to increase the rake by 3 degrees to 30. The original swing arm was swapped out for a heavily modified Moto Guzzi California swinging arm which was braced and coupled to a mono shock cantilevered system. Not something we’ve seen done before.

The frame and front wheel were then coated in our custom ‘Airforce Grey’, mixed specifically for this project. The wheels are modified California Hubs, laced to 21×3.00 aluminium rims, the rear utilising hand spun aluminium disc covers. Tyres are period Firestone items. The front end is a highly customised Aprillia RS250 arrangement, re-valved and refinished, while the rear suspension unit is an aviation-inspired bespoke item courtesy of Hagon.

Braking is taken care of by a pair of billet four pot Brembo calipers, operated remotely via cable to a Brembo RCS master cylinder. Designed and built in house, the 300mm rotors are one off DMOL designed steel items. 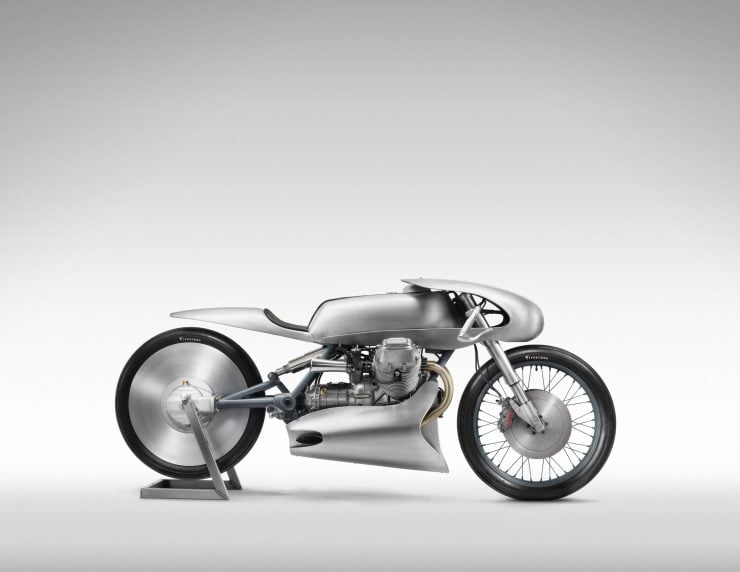 Engineering that has more in common with watchmaking, than with motorcycle building.

All the controls on Airforce are custom-made: clip-on tubes, grips, and internal throttle have all been fabricated in-house with pegs and controls working on modified Stucchi gear change linkage. Airforce also features our first set of completely custom levers: the inverse Lever Type IN01. Precision machined from aviation grade aluminium, the IN01’s will soon be available to buy as a part.

An M-Unit and custom loom controls the machines electric functions, with a single Xenon projector light working both hi and low beam and an LED rear light housed in our custom cluster. The speedometer has been redesigned and precision etched in nickel silver and brass, with dimmable radial illumination through a dedicated controller. Now, we know they didn’t have electric guitars and amps back in Giovanni’s day, but we like to think he’d be into his Foo Fighters, so ignition comes courtesy of a ¼ inch guitar jack with a built in immobiliser proximity sensor. Because hell yeah. 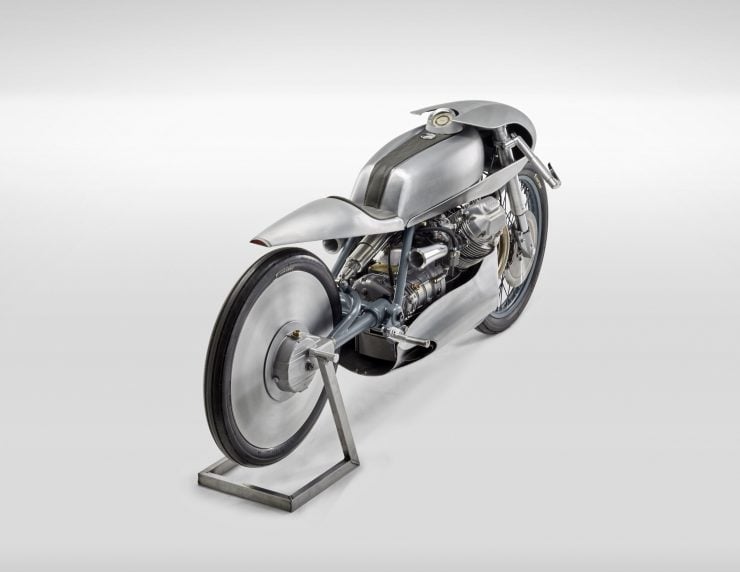 And finally to that bodywork. Beaten and welded by the hand of DMOL’s master craftsman, all the panelling has been built using the classic buck technique, where a wood skeleton is wrapped in aluminium – something Giovanni would’ve appreciated. This process, for obvious reasons, leaves imperfections – tiny hammer dents, small weld holes and the like. These are usually covered with filler and paintwork, but instead we chose to leave the metal raw and simply brush it – reminiscent of the WW1 fighter that was our inspiration for the project.

The front fairing slots into the side of the fuel tank, creating uninterrupted flowing lines. The lower concave curve of the fuel tank is mirror polished to reflect the high-gloss paint finish on the inside of the front fairing – the only part of the bodywork that is given this treatment. The bellypan is double-skinned, enclosing the exhaust pipes. Finally, the Italian leather seat features a hand-stitched pattern based on air-flow to enhance the impression of movement.

Airforce was built in 112 days (just in time for BikeShed 2017). So why did we wait so long to tell anyone about it? Because it needed to be better. There were parts we could’ve left alone without anyone noticing, except we noticed. It would’ve been far easier to not remake the belly pan or re-engineer entirely new levers. That would’ve been the easy thing to do. But as Mr. Giovanni Ravelli knew: the meek are seldom remembered. 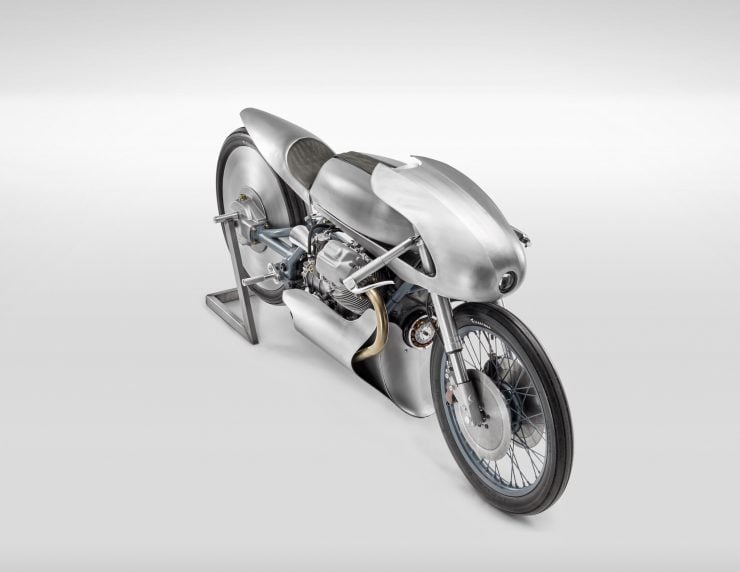 14 January 1887 – 11 August 1919
Ravelli and Carlo Guzzi served together as pilots in the Italian Air Corps during WW1, where they met the mechanic Giorgio Parodi and discovered they shared a common passion: motorcycles. They then decided they would start building them together. Unfortunately Ravelli was killed in a test flight accident and never officially joined the company. So to pay tribute to him they set the Airman Eagle as the centrepiece of the logo of their new company, Moto Guzzi.

About Death Machines of London

Founded by designer James Hilton and engineer Ray Petty, Death Machines of London is rapidly making a name for itself as one of the UK’s most innovative automotive design brands. DMOL represents the imaginative application of art and engineering to create beautiful bespoke machinery. 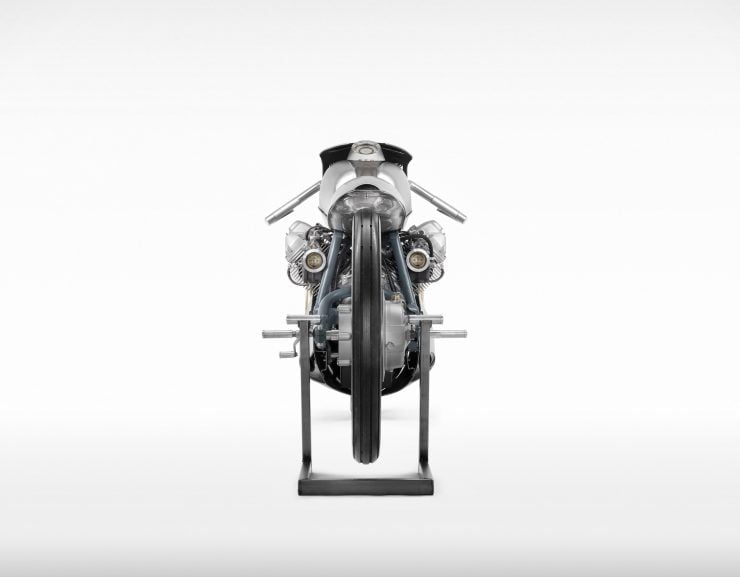 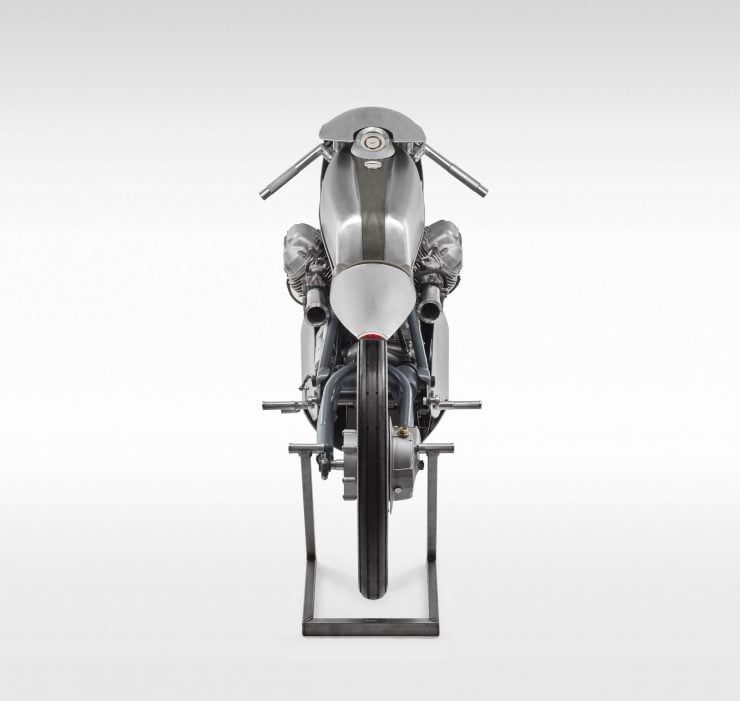 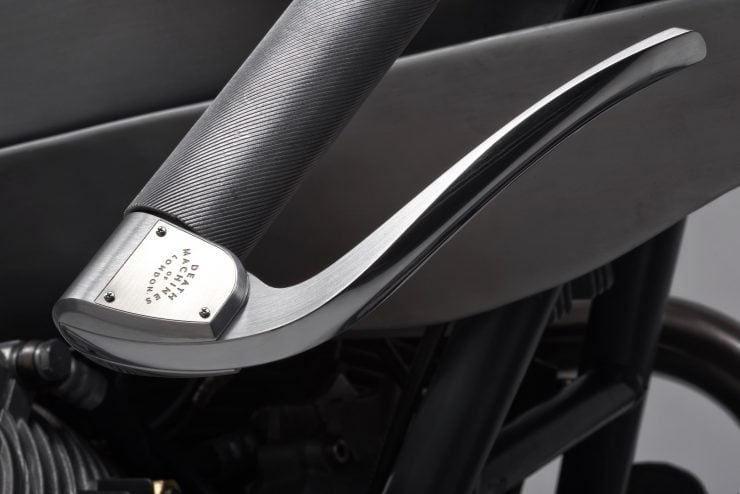 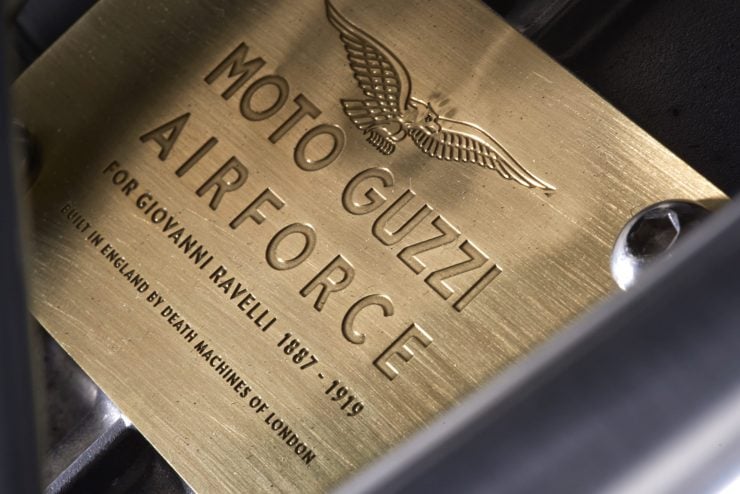 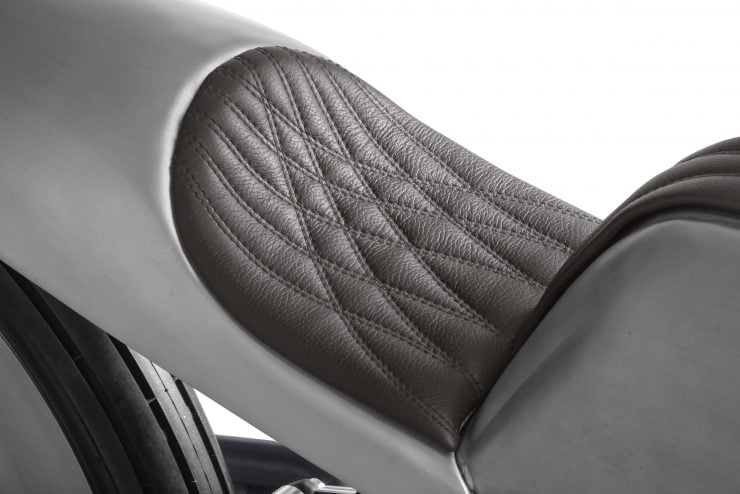 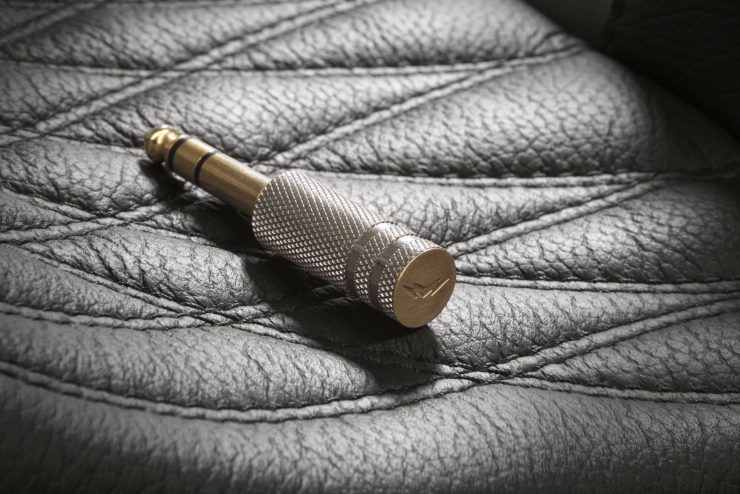 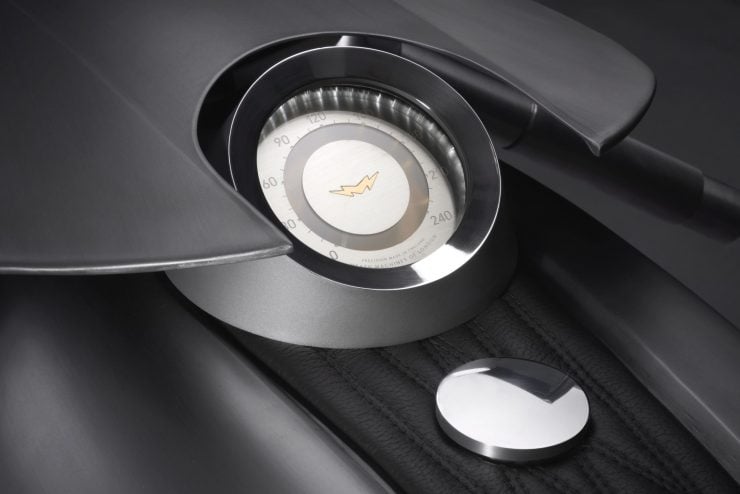 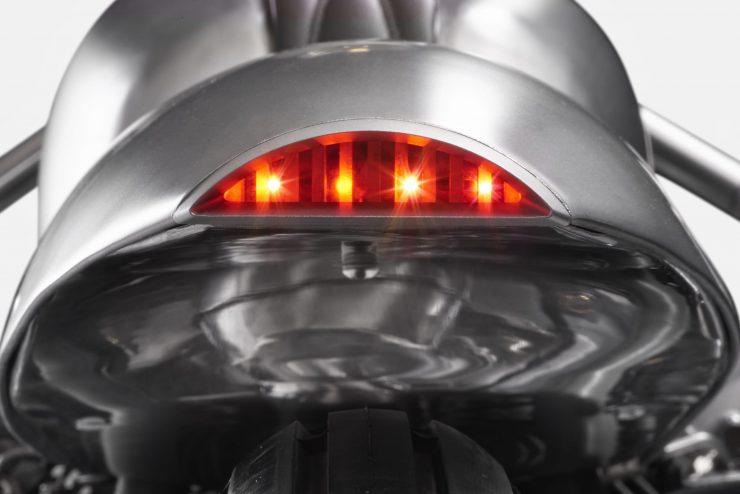 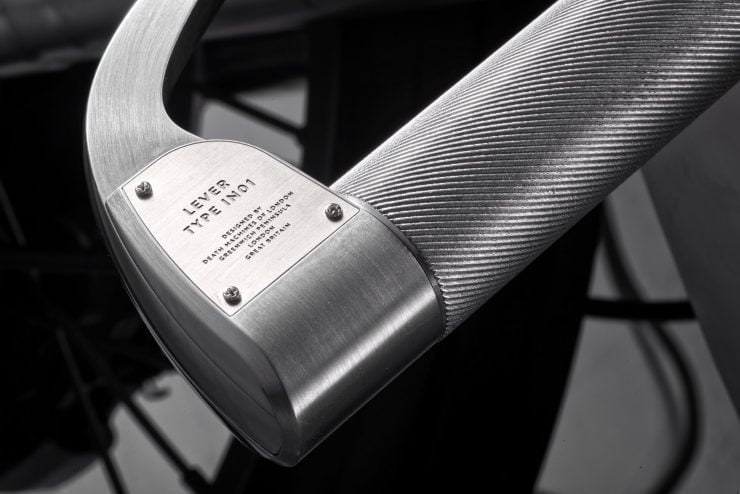 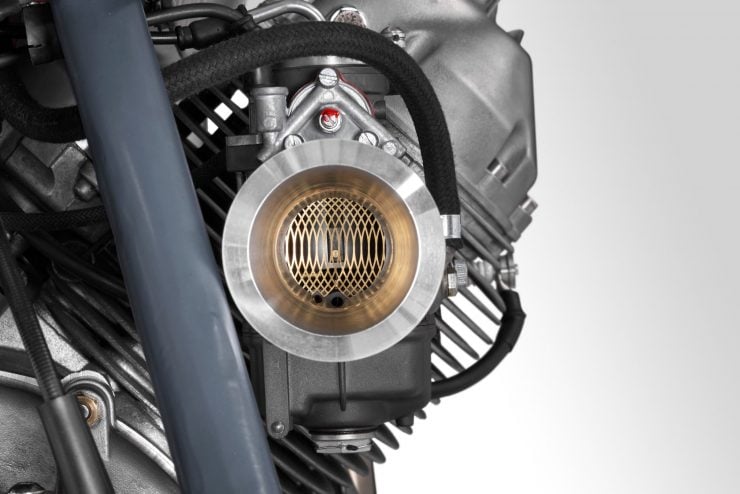 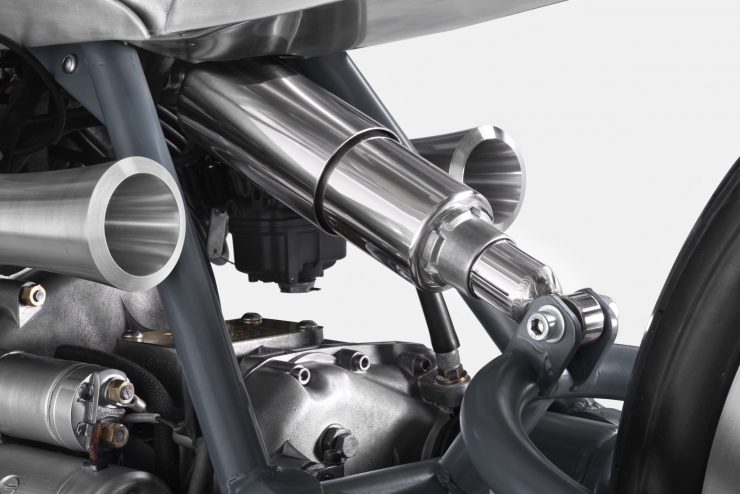 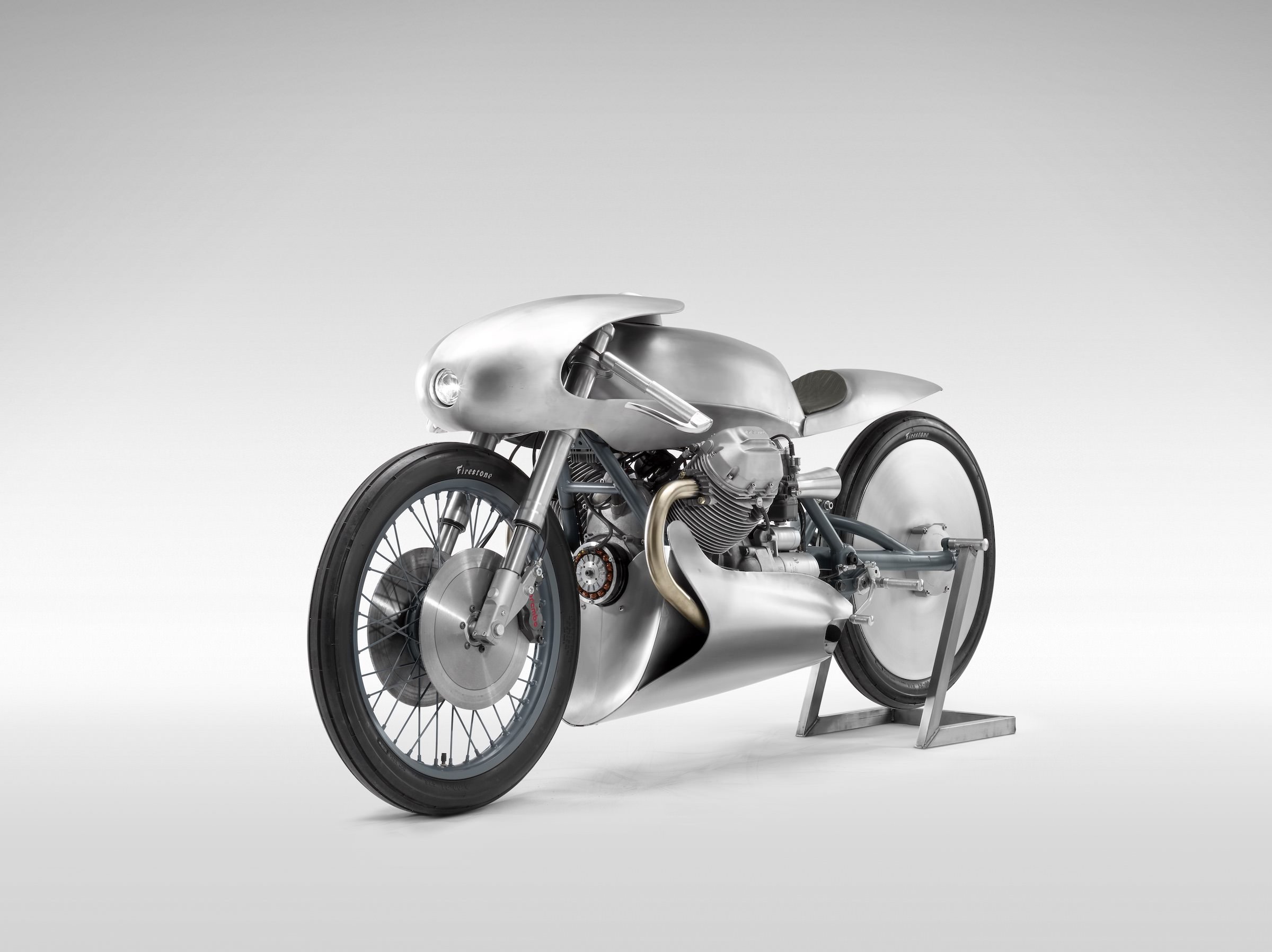