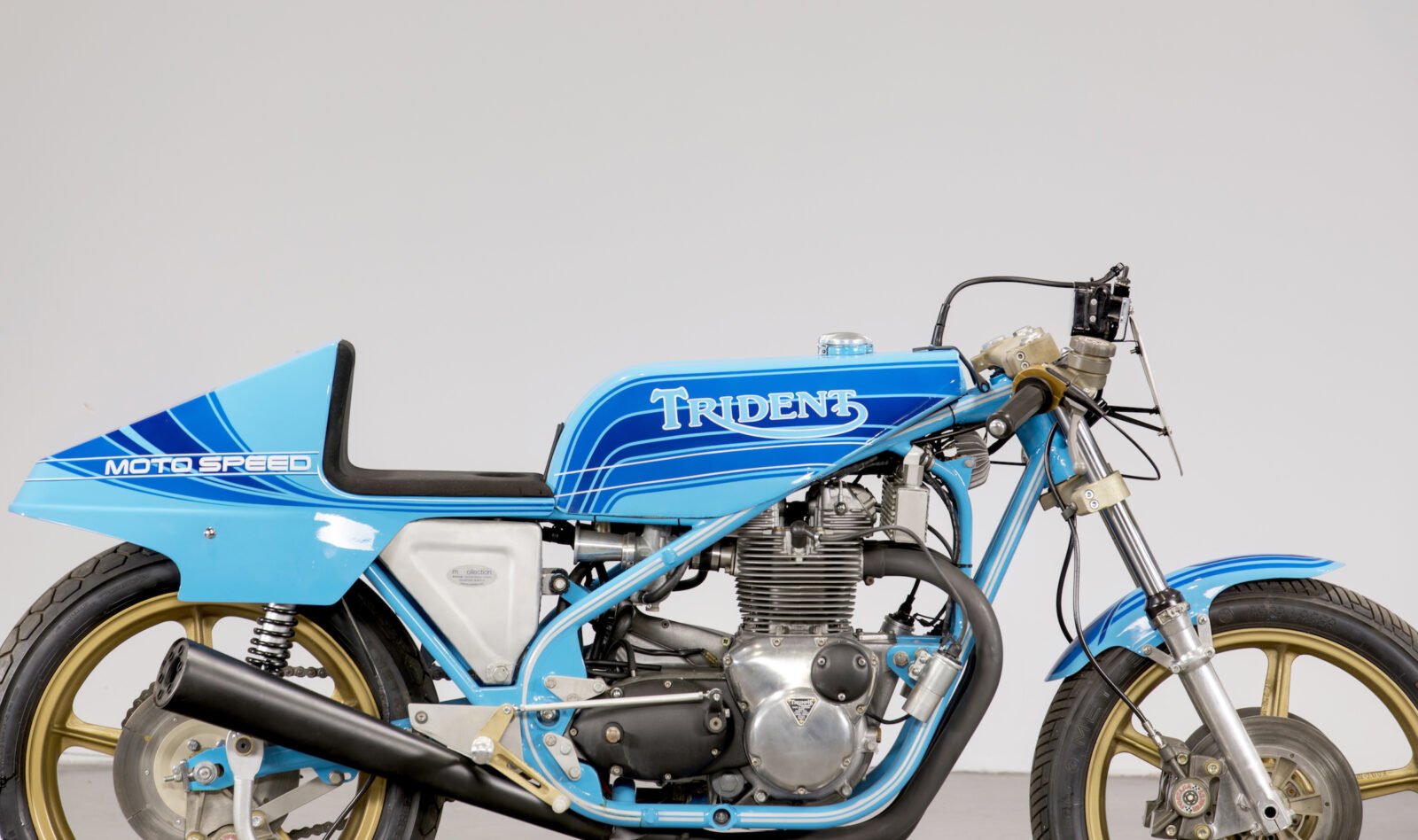 The Triumph Trident and its BSA Rocket 3 sibling were, in a way, a last hurrah for the previously globally dominant British motorcycle industry.

A racing effort funded on a shoelace budget was launched in 1970 to promote the 750cc triple being used by both Triumph and BSA. Frame construction was contracted out to British specialist Rob North, he developed a chassis that was years ahead of its time – a perimeter frame with excellent rigidity, and top rails that run directly from the steering head to the swingarm pivot point. 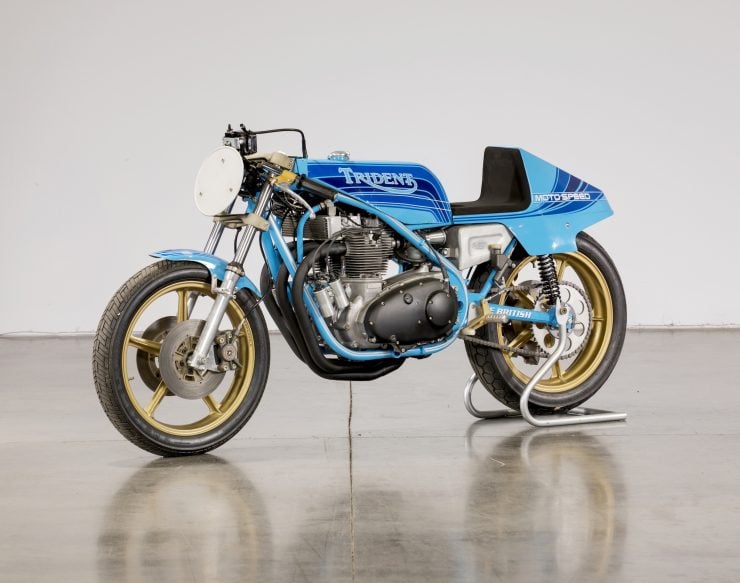 Without the funds required to develop a new engine from scratch the team at Triumph/BSA had taken their 500cc parallel twin and essentially grafted on an extra cylinder, creating an inline-3 cylinder motor that was better balanced that a parallel twin, but not as wide and heavy as an inline-4.

While the factory engineers led by Doug Hele focussed on tuning the engine for as much power as possible, Ron North focussed on frame development. The resulting motorcycle was far quicker than many had expected, it was capable of 90 hp and it had scalpel-like handling thanks to the work of North and his team.

The biggest competitor for the Triumph Trident and its sibling, the BSA Rocket 3, was the Honda CB750. 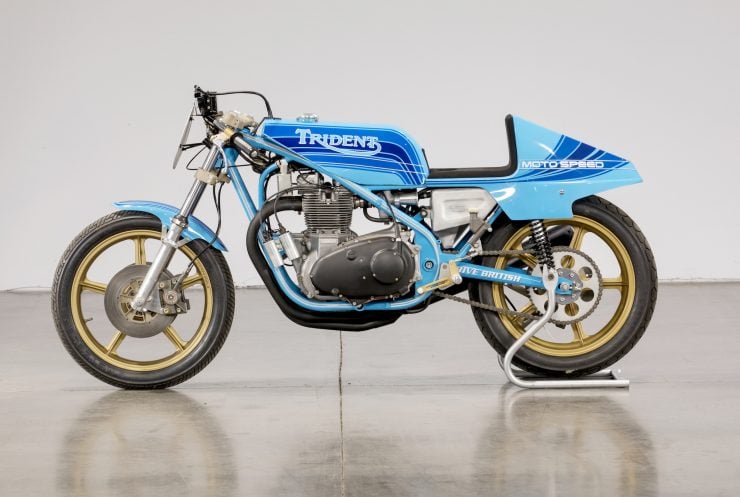 In order to make their new superbike land with a bang, the Japanese engineers at Honda had rolled in every modern and advanced feature they possibly could, including a SOHC inline-4, an oil-tight horizontally split crankcase, a 5-speed transmission, an electric starter, and reliable operation.

The CB750 was heavier than its British and Italian competition, and its handling wasn’t as good (for the first few years at least), but its positive far outweighed any negatives, and the model would go onto be emulated by the other “Big Three” Japanese motorcycle manufacturers – creating the UJM or “Universal Japanese Motorcycle“.

Honda dealers around the world struggled to keep the CB750 on the showroom floor, such was the speed at which they sold, and the model would signal the death-knell for the British and Italian motorcycle industries – for a few years at least. 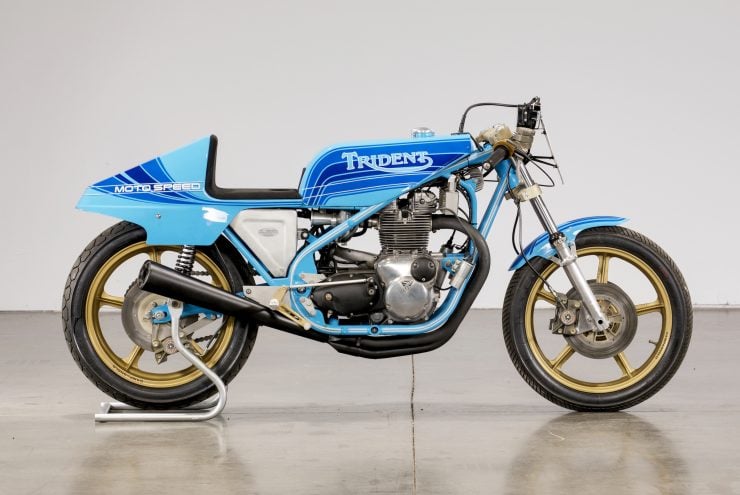 Wins at the Daytona 200 and the Isle of Man TT

With the Honda CB750 far outpacing the Triumph Trident and the BSA Rocket 3 in sales numbers, the British triple turned the tables on the race track in 1971. Modified racing versions of the British bikes would take a 1-2-3 sweep at the ’71 Daytona 200 with Dick Mann/BSA in 1st, Gene Romero/Triumph 2nd, and Don Emde/BSA in third.

A specially prepared Triumph Trident named Slippery Sam was run by a team led by Les Williams in the early-to-mid 1970s, the team took the bike to a 5 consecutive victories at the Isle of Man TT in the 750cc production races between 1971 and 1975.

The tumultuous 1968 to 1975 production run of the Triumph Trident was punctuated by some great victories on the race track, combined with a series of labor disputes, strikes, and low sales figures. Surviving examples are now much sought after by collectors, and the incredibly rare Rob North-framed bikes are two-wheeled unicorn dust. 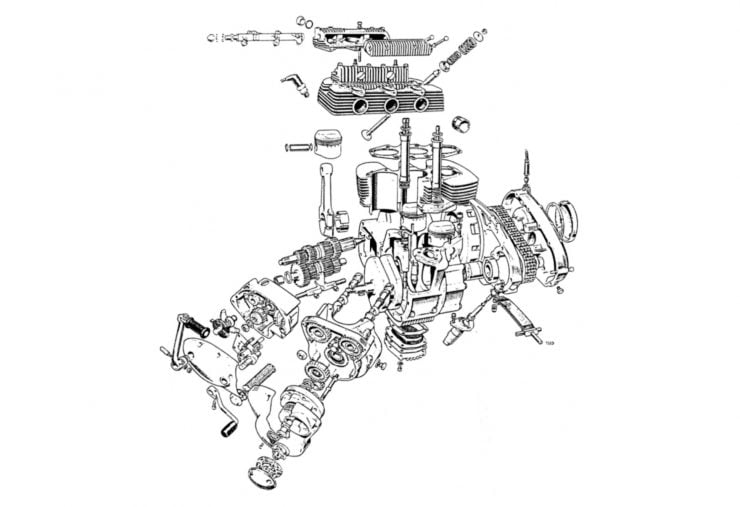 This bike was built in 1978 by Maurizio Olivetti using an original Rob North frame and a Triumph Trident 3-cylinder engine, he raced the bike a year later but as is often the case, the skills required to build great race bikes and the skills required to competitively race those bikes rarely exist within the same person. This proved to be the case for Olivetti, and so the bike wasn’t raced much more if at all.

The benefit of this is that it now presents in remarkably good original condition, with a bright blue Rob North frame, magnesium Campagnolo wheels, twin front disc brakes, a single disc brake rear, and that distinctive seat designed for high speed aerodynamics.

Mecum will be offering this unique Triumph at the Las Vegas auction in late January, if you’d like to read more about it or register to bid you can click here to visit the listing. 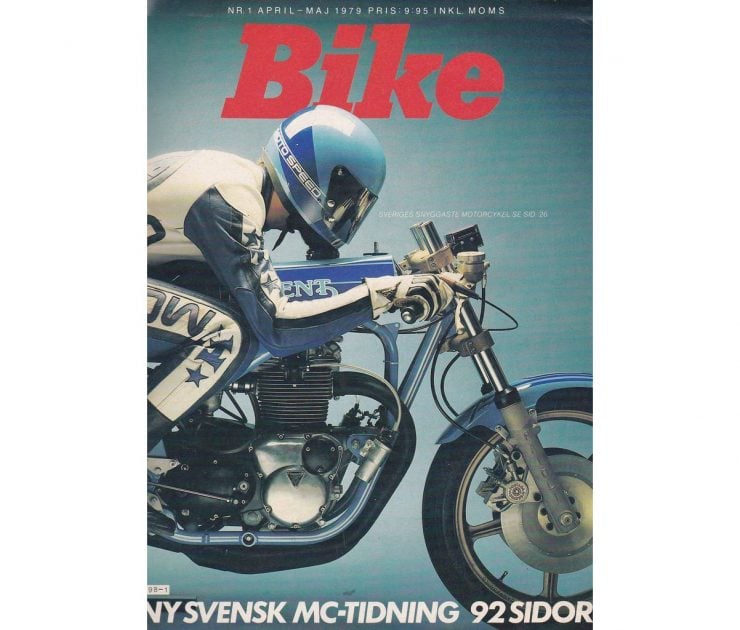 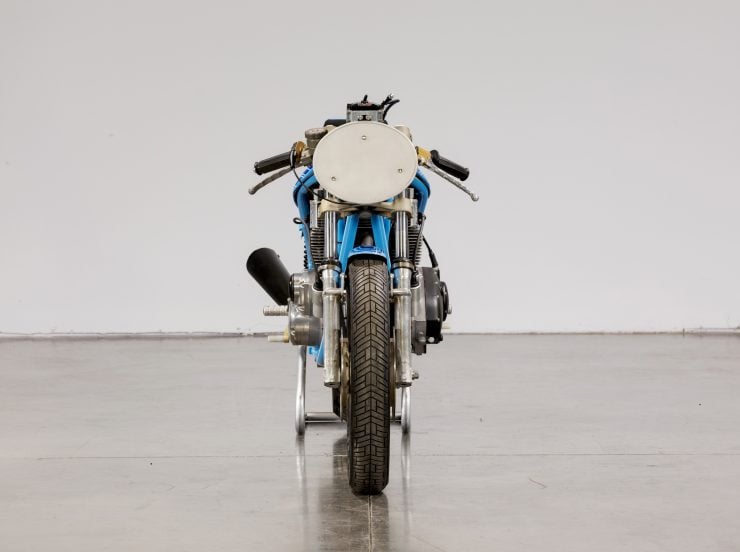 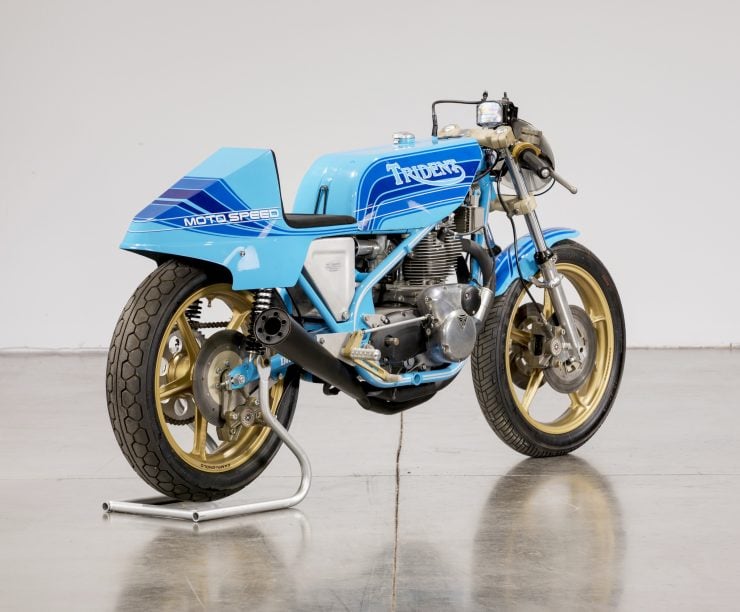 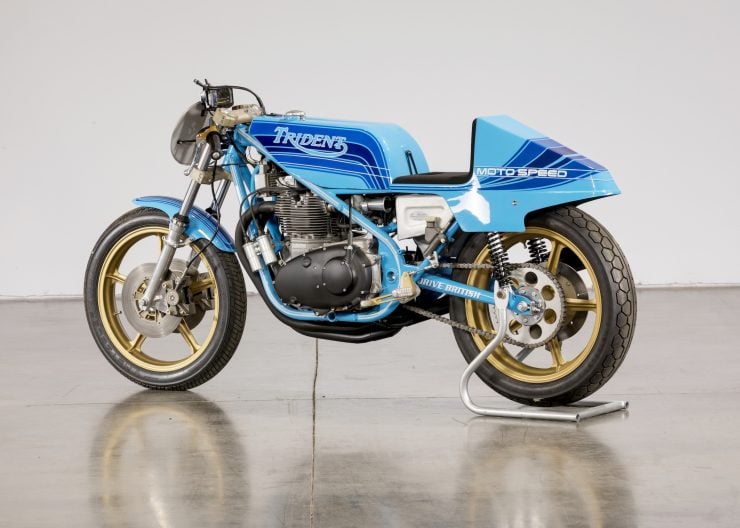 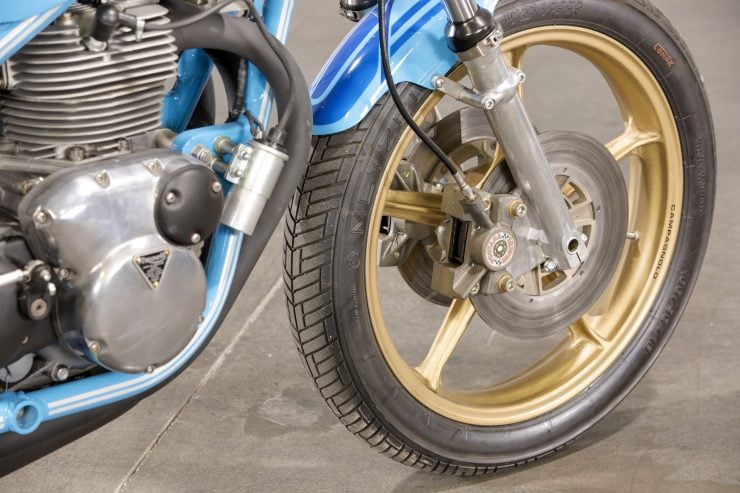 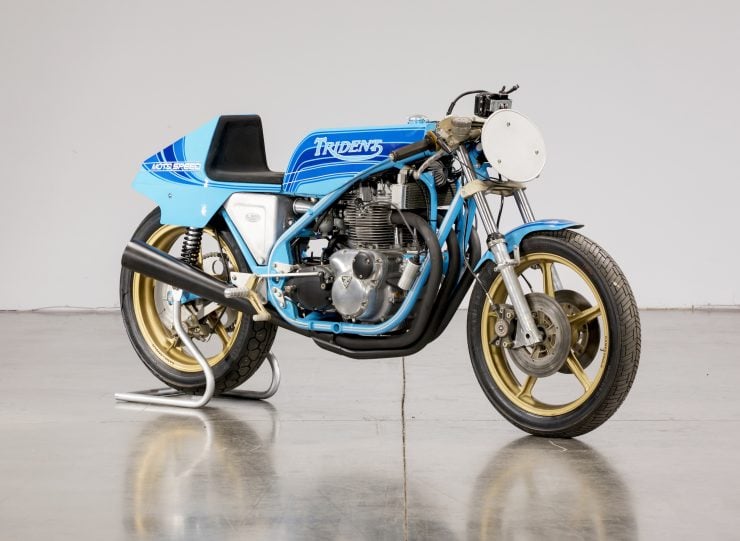 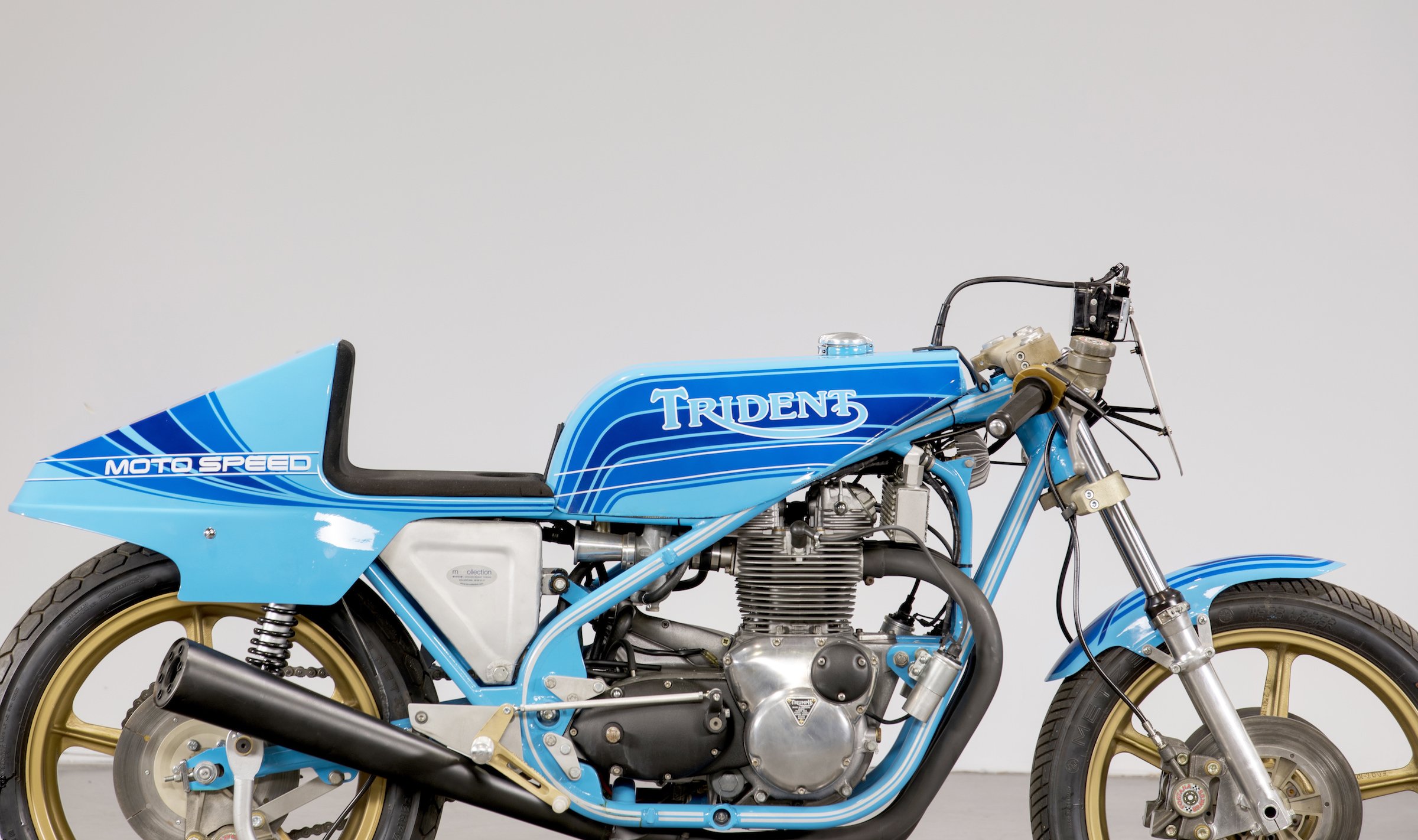