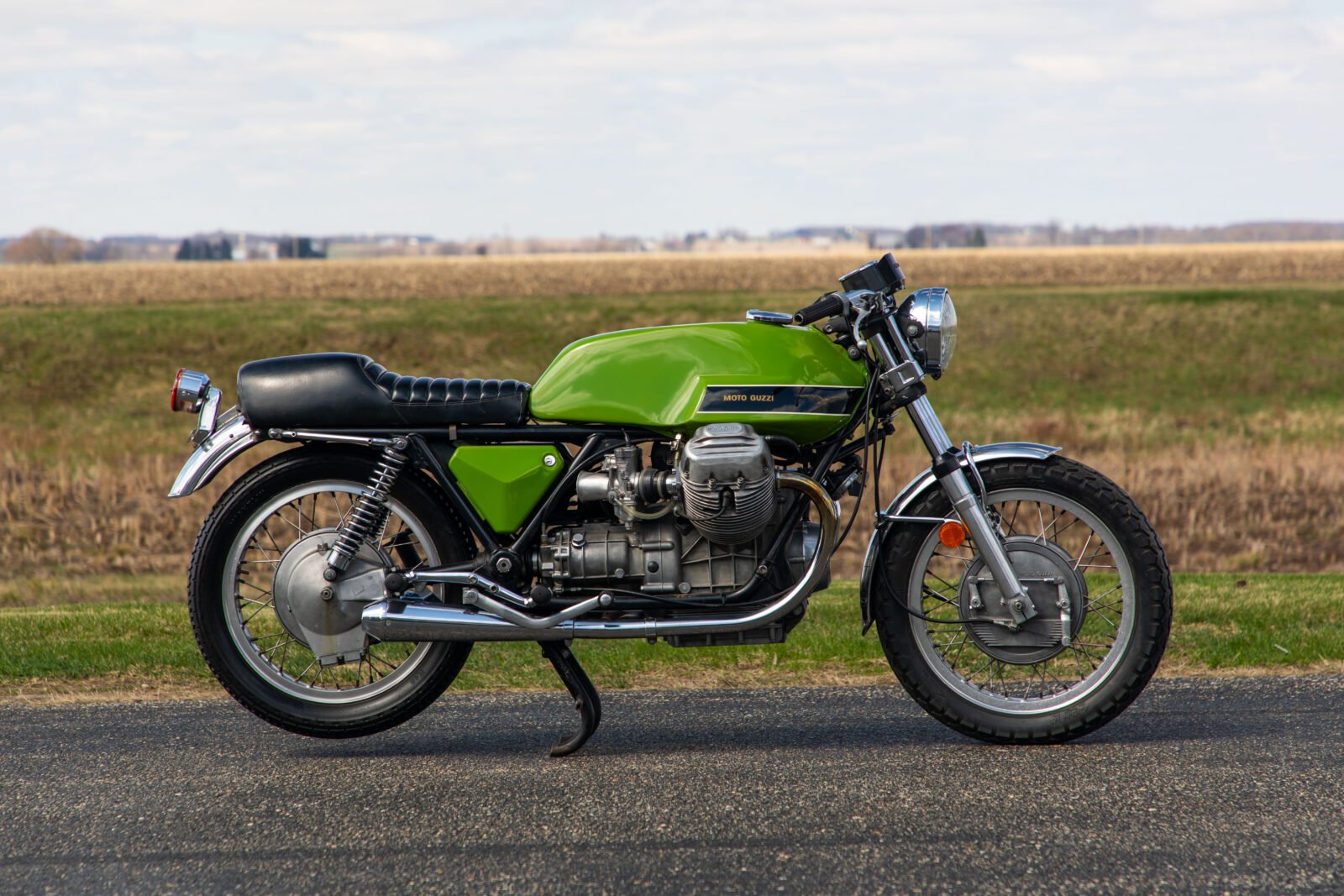 This is an original Moto Guzzi V7 Sport from the first year or the model’s production – 1971. The V7 Sport would prove to be one of the most important motorcycles in the history of the storied Italian motorcycle marque – so much so that in 2007 they introduced an all new version of the V7 which remains in production to this day.

Moto Guzzi was founded in Mandello del Lario, Italy in 1921. The company enjoyed remarkable success with a slew of best selling models and no shortage of on track successes – winning the Targa Florio in 1921 and going on to win 14 World Grand Prix Championships and 11 Isle Of Man TTs before the company withdrew from motorsport at the end of 1957.

In the early 1960s Moto Guzzi engineers were hard at work on a new engine design – a V-twin that was to be mounted longitudinally in the frame with the heads out in the clean airflow. This new air-cooled engine sent power back to the rear wheel via a low-maintenance shaft drive.

This engine was intended for use in a new, large motorcycle designed for police use. Once the American Motor Guzzi dealers got wind of the project they strongly encouraged the company to develop a production version for the American market to challenge Harley-Davidson. 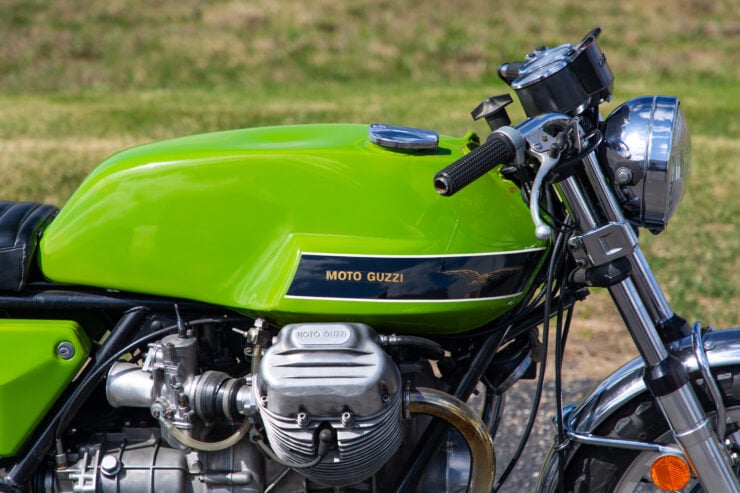 Above Image: The V7 Sport has a famously beautiful fuel tank, with knee indents just like its Isle of Man TT racing forebears.

These requests resulted in the Moto Guzzi Ambassador, targeted directly at the V-twins from Milwaukee. It proved popular with American buyers, and it wasn’t long before they began to wonder what other motorcycles they could build with the engine that would sell well.

In 1970 Lino Tonti took over as head of design and engineering at Moto Guzzi from Giulio Cesare Carcano. Tonti brought a wealth of experience to the role, he had previously worked at Benelli, Aermacchi, FB Mondial, and Bianchi.

Tonti saw the potential for a performance motorcycle powered by the Moto Guzzi V-twin, an idea that may have sounded strange at the time as the engine was so closely associated with the 560+ lb highway cruising Ambassador.

He set to work on a new frame, it would be retroactively dubbed the “Tonti Frame”, it would form a duplex cradle around the engine rather than under it, using the engine itself as a stressed member.

This new frame was both stiffer and lighter than the frame used on the Ambassador, and as a result it offered much better handling. A modified version of the engine was created, and the heads were reworked to give an additional 7 bhp.

Tonti and his engineering team gave the model cafe racer styling with sleek lines and what is now regarded by some as one of the most beautiful motorcycle fuel tanks ever created.

The new motorcycle would be officially called the Moto Guzzi V7 Sport, it would prove a strong seller for Moto Guzzi despite its relatively high price tag, and it gave the Honda CB750 a run for its money. 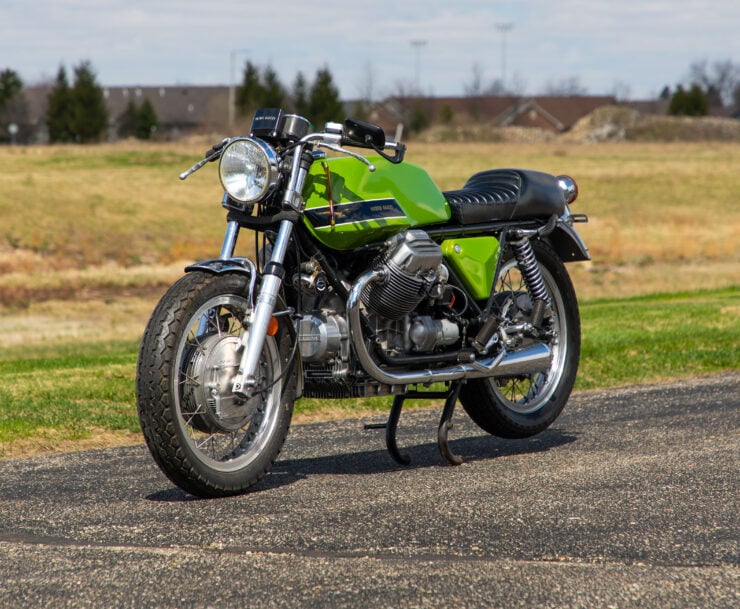 Above Image: Even when compared to disc brakes, the drums on the V7 were highly praised by reviewers when the bike was released.

Period reviewers remarked that the bike had excellent handling, good brakes, and beautiful styling – some went so far as to call it the “Perfect Motorcycle.”

The success of the V7 Sport would lead to a slew of other similarly styled Guzzis including the very successful Le Mans models, and it would form the stylistic foundation of the V7 models in production today – over 50 years later.

The 1971 Moto Guzzi V7 Sport you see here is a well-preserved example that’s never been restored – just touched up from time to time when needed.

This one will be rolling across the auction block with Mecum at the Las Vegas Motorcycle Auction in late April. If you’d like to read more about it or register to bid you can click here to visit the listing. 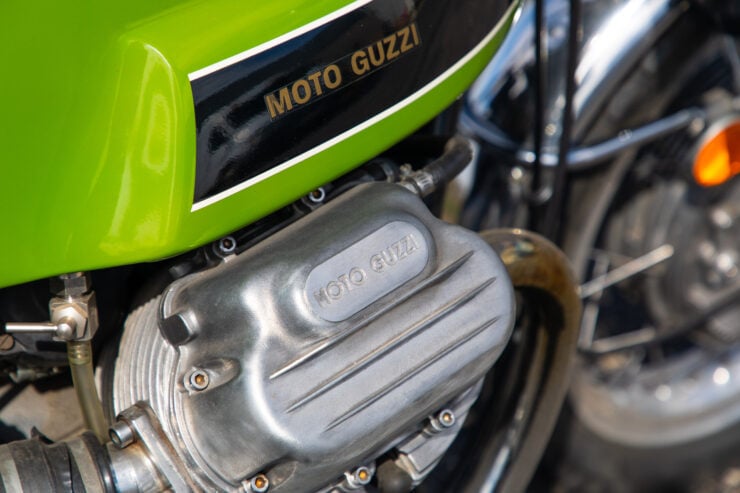 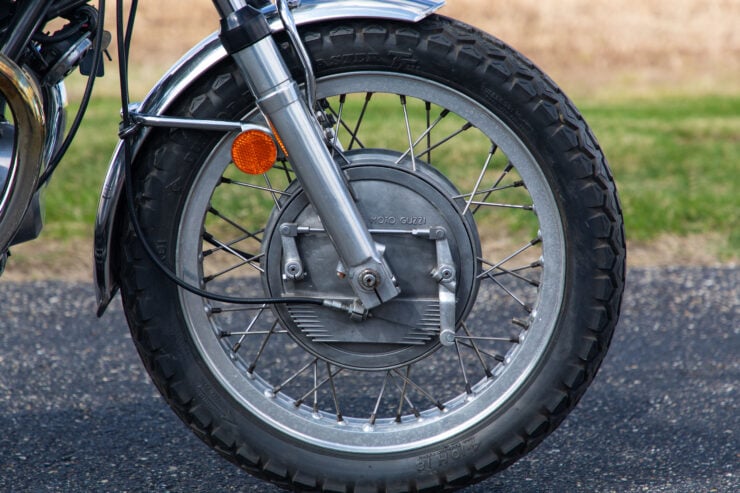 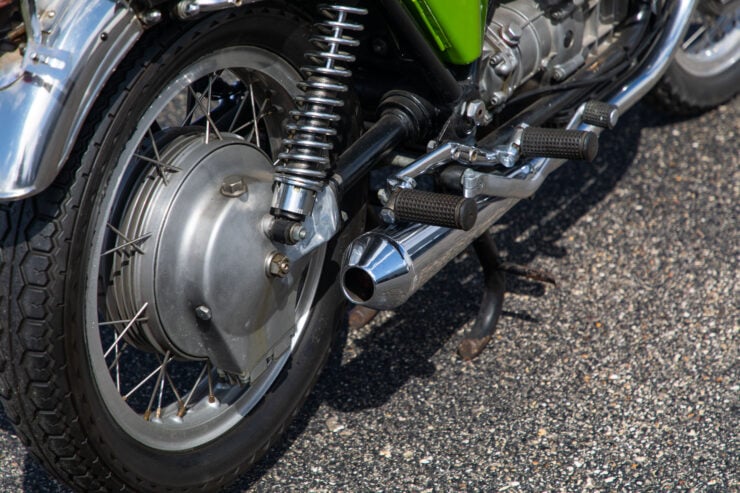 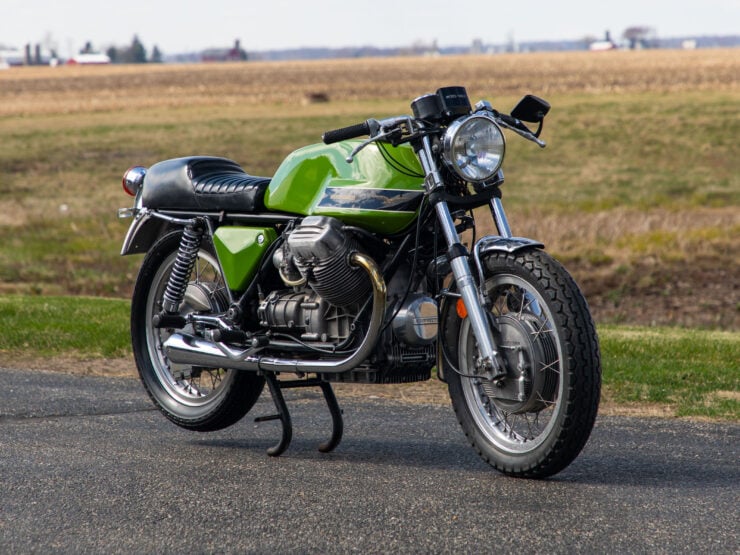 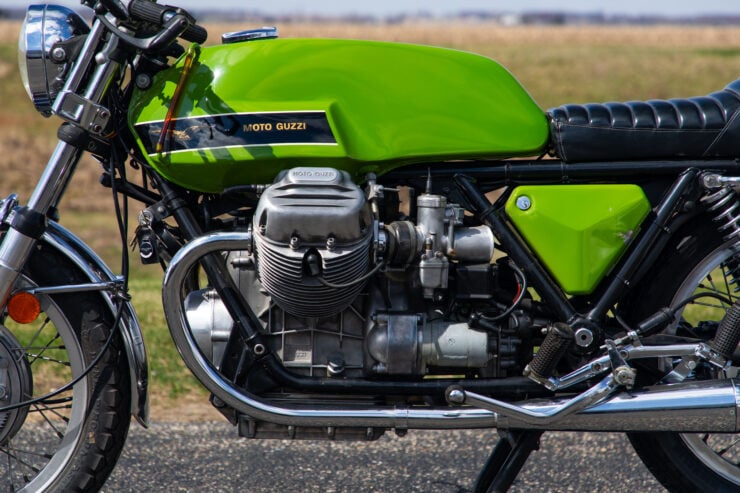 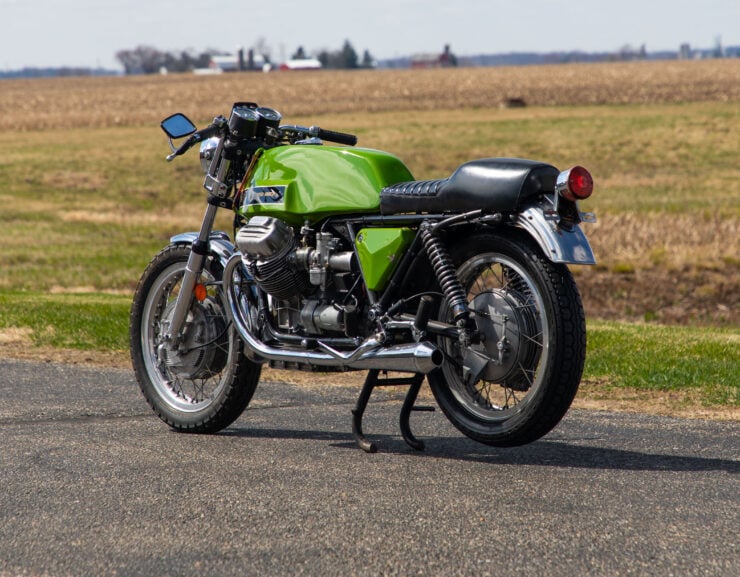 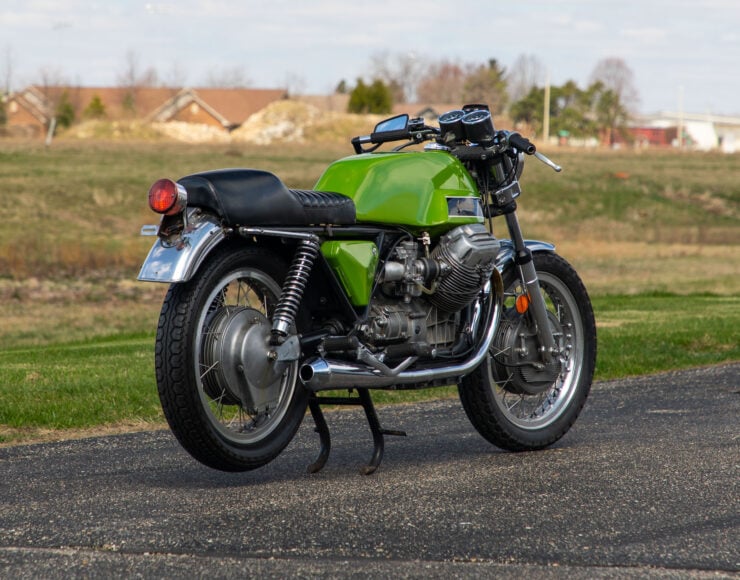 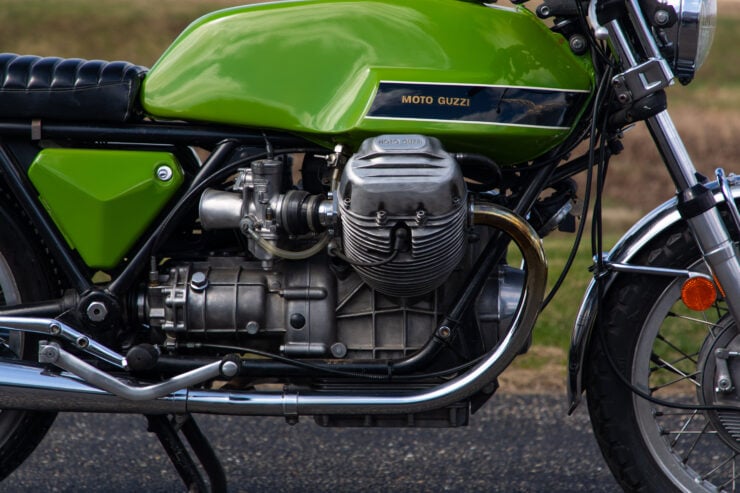 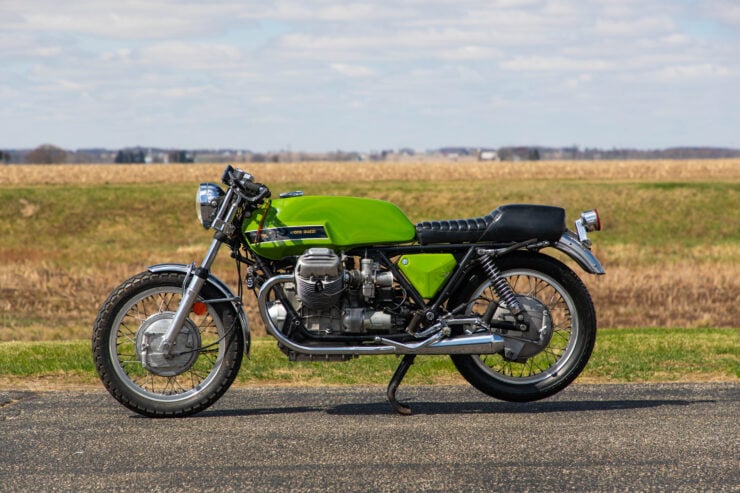