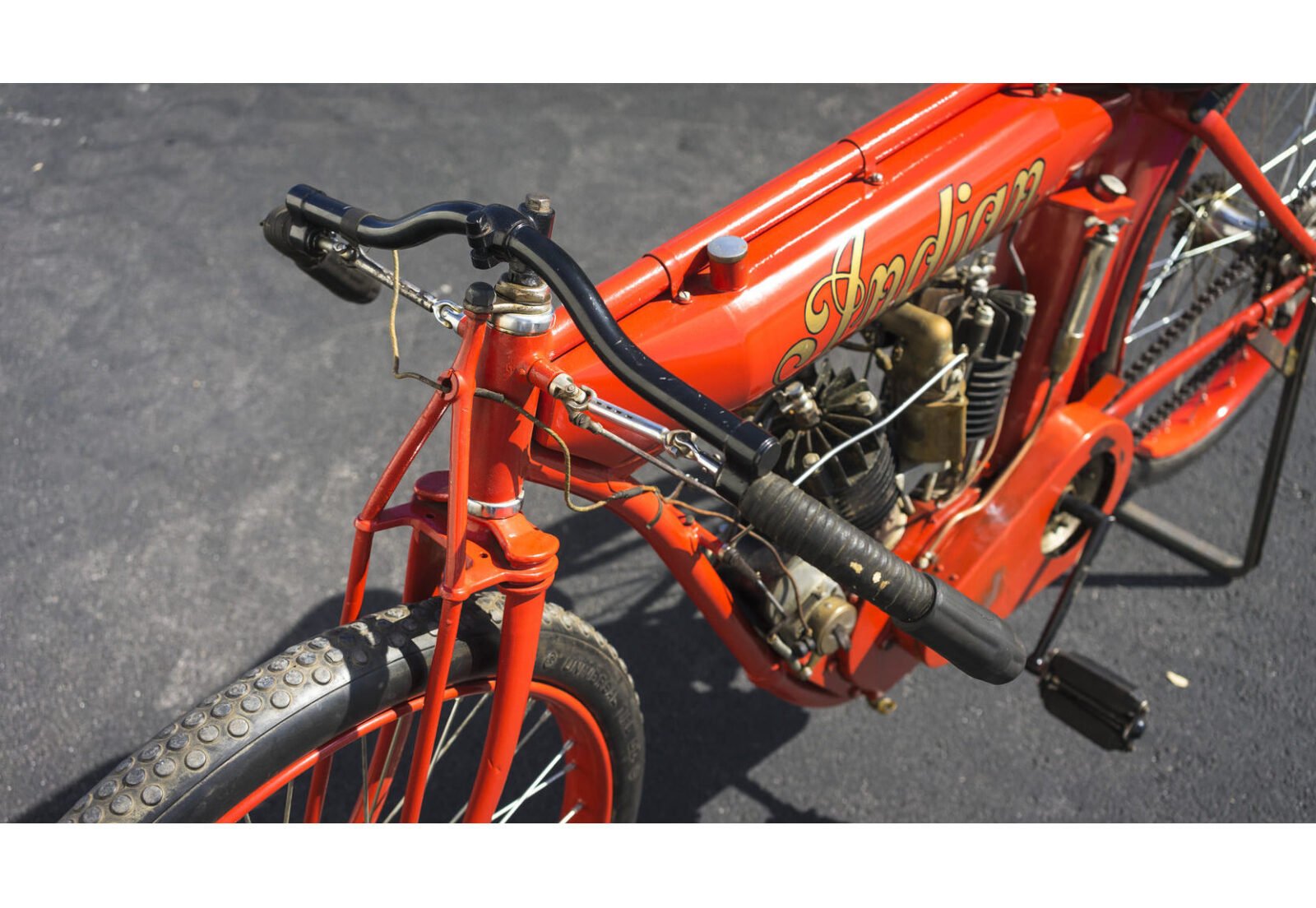 Back in the early part of the 20th century, Indian Motocycle were one of the most successful and prolific builders of both racing and road motorcycles in the world.

Most people don’t typically associate Indian with racing, but the Indian factory team took the first three places in the 1911 Isle of Man Tourist Trophy competing against the best in the world.

Indians were also a dominant force on the board tracks, dirt tracks, and hill climbs of the USA – and you’ll still find Indians from the era being used daily on Wall of Death attractions in carnival sideshows.

A Return To Form

More recently Indian, now owned by Polaris, has shown a return to competitive form. The Indian Scout FTR750 swept to the 2017 American Flat Track Championship title after a 60 year hiatus, beating out the likes of Yamaha, Kawasaki, and Harley-Davidson.

The 1912 Indian Twin Board Track Racer

The board track racer you see here is a great example of the kind of motorcycle that propelled brave young riders to speeds in excess of 100 mph around the banked wooden motordromes that dominated the racing landscape of the 1910s and 1920s. 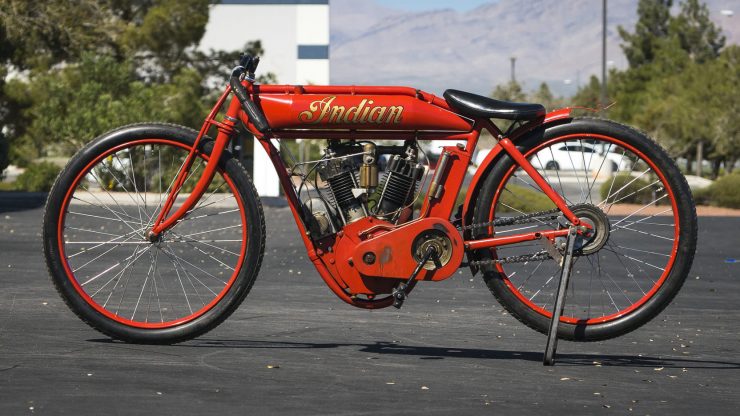 As with almost all board track motorcycles, this one has no brakes, no suspension, a rudimentary single tube frame, a thinly padded seat, a fuel tank fitted between the upper frame members, low swept handlebars, and pedals to help with engine starting.

For protection, riders would typically wear a leather helmet, goggles, some moustache wax, and a nice woolen sweater.

This Indian is powered by the company’s famous 61 cubic inch V-twin (~1000 cc), with an intake-over-exhaust head (an F-head), a centrally mounted carburetor, and a front mounted magneto.

Mechanical inlet valves had been introduced for the 1908 model year, significantly improving performance and reliability, a year later in 1909 a new frame would be implemented that no longer used the rear cylinder as a load-bearing member.

Indian didn’t start building race-specific bikes for public sale until 1908, the same year that company founders Hedstrom and Hendee opened their own hometown pine board motordrome in their hometown. It was designed as a private Indian test track that could double as a race track on weekends, and Indian works rider Jake DeRosier completed countless laps as various engine and frame modifications were trialed.

Indian board trackers would win countless races across the USA during the golden era, and their distinctive look is still considered by many to be amongst the most beautiful motorcycle designs of all time.

The 1912 Indian Twin you see here was built by Bud Cox, he discovered the original frame and fuel tank in 1963, then found the engine in 1974. Interestingly the engine is stamped number “3”, which will likely attract the attention of Indian historians. Bud built the bike in 1975, and it remained part of his collection for over 40 years.

If you’d like to read more about the bike or register to bid, you can click here to visit the listing on Mecum. It’s due to be auctioned between the 23rd and 27th of January at the Las Vegas Motorcycle Auction. 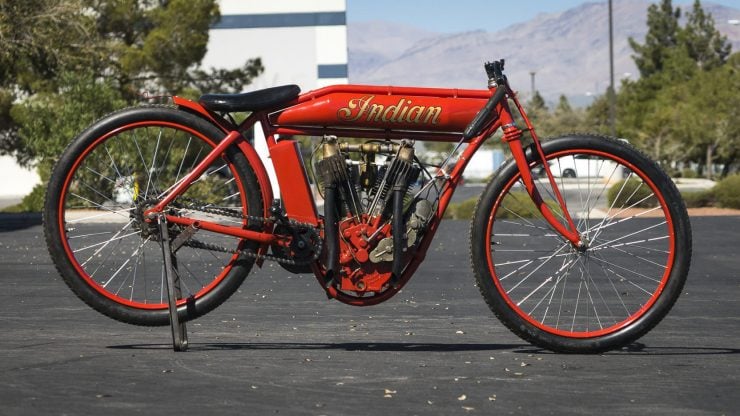 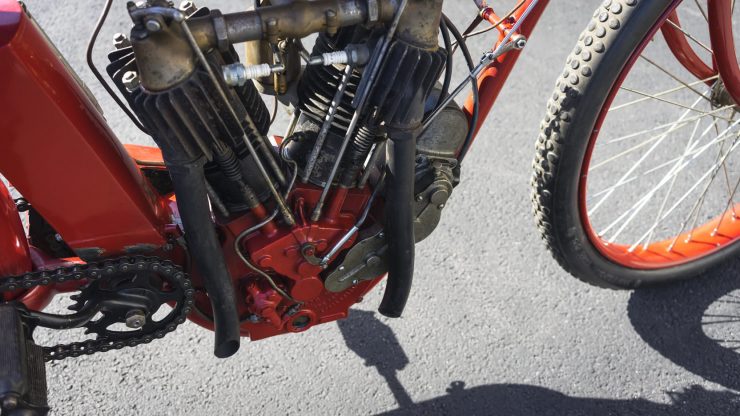 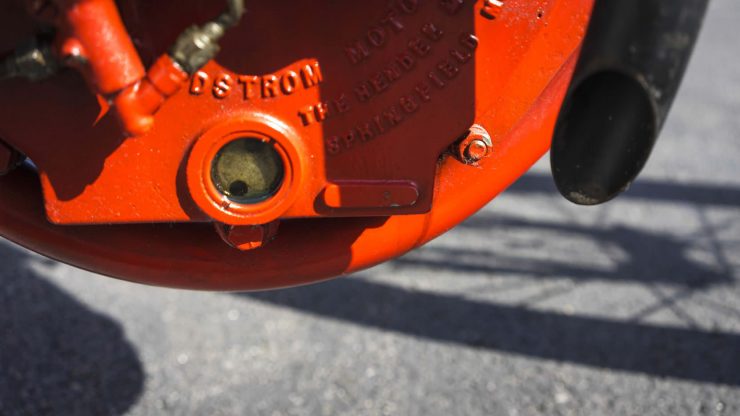 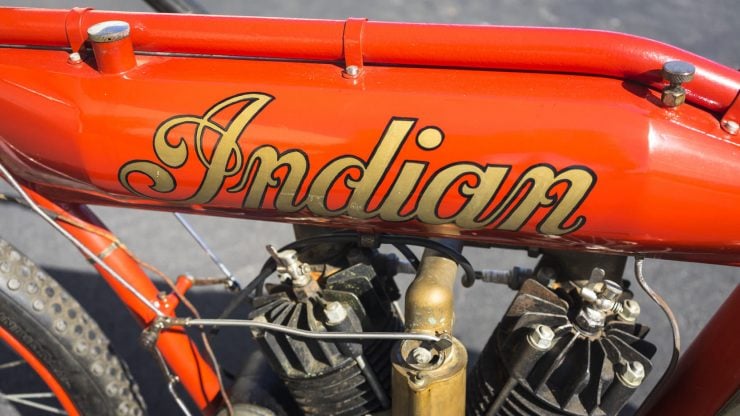 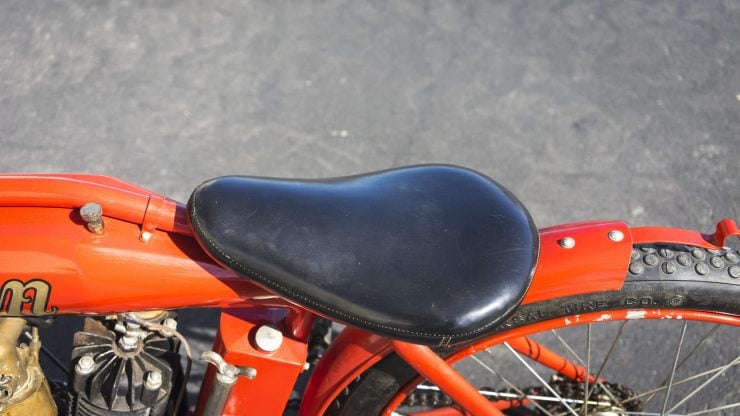 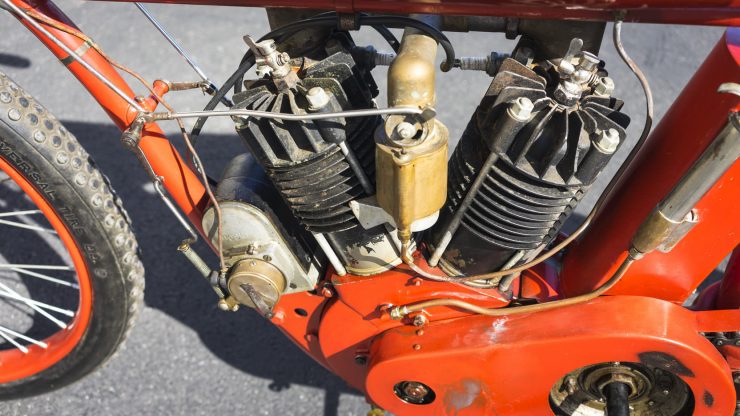 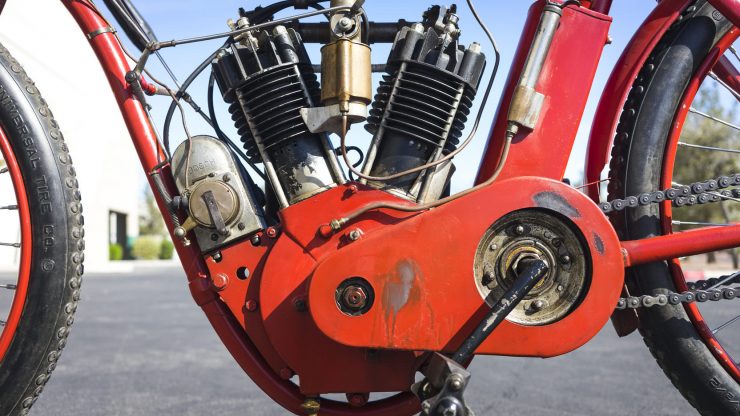 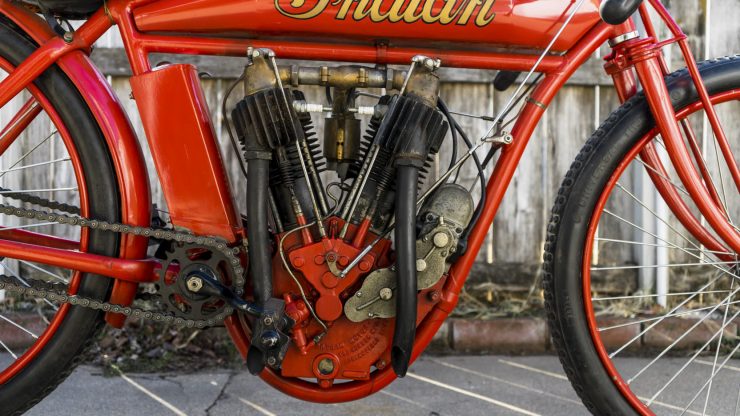 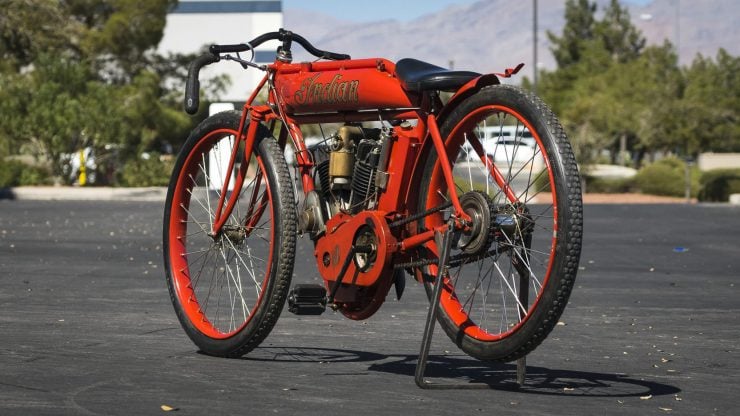 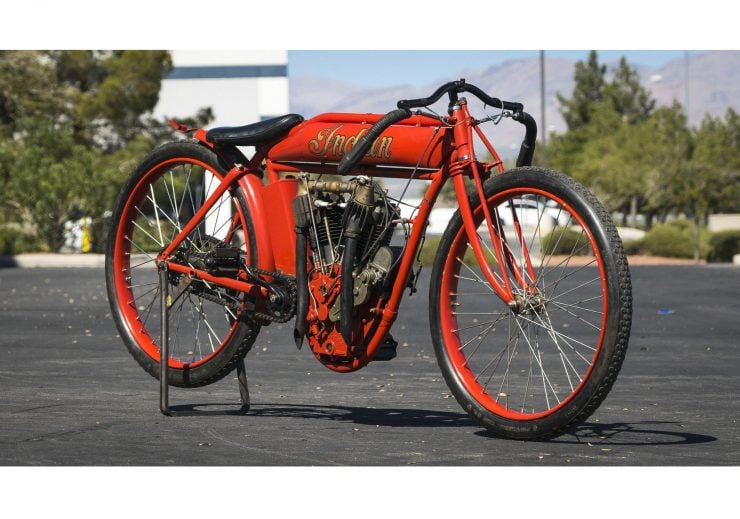 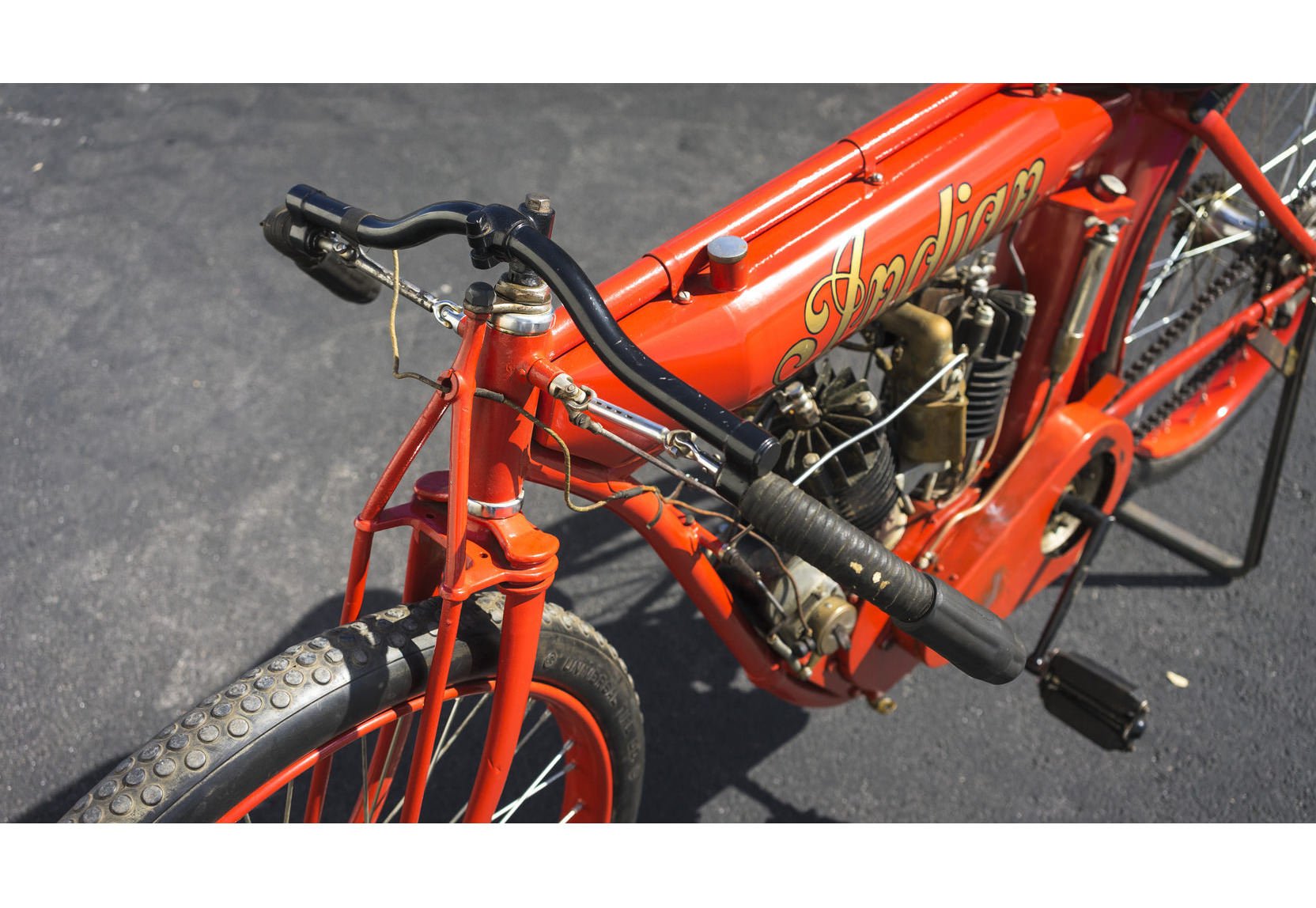