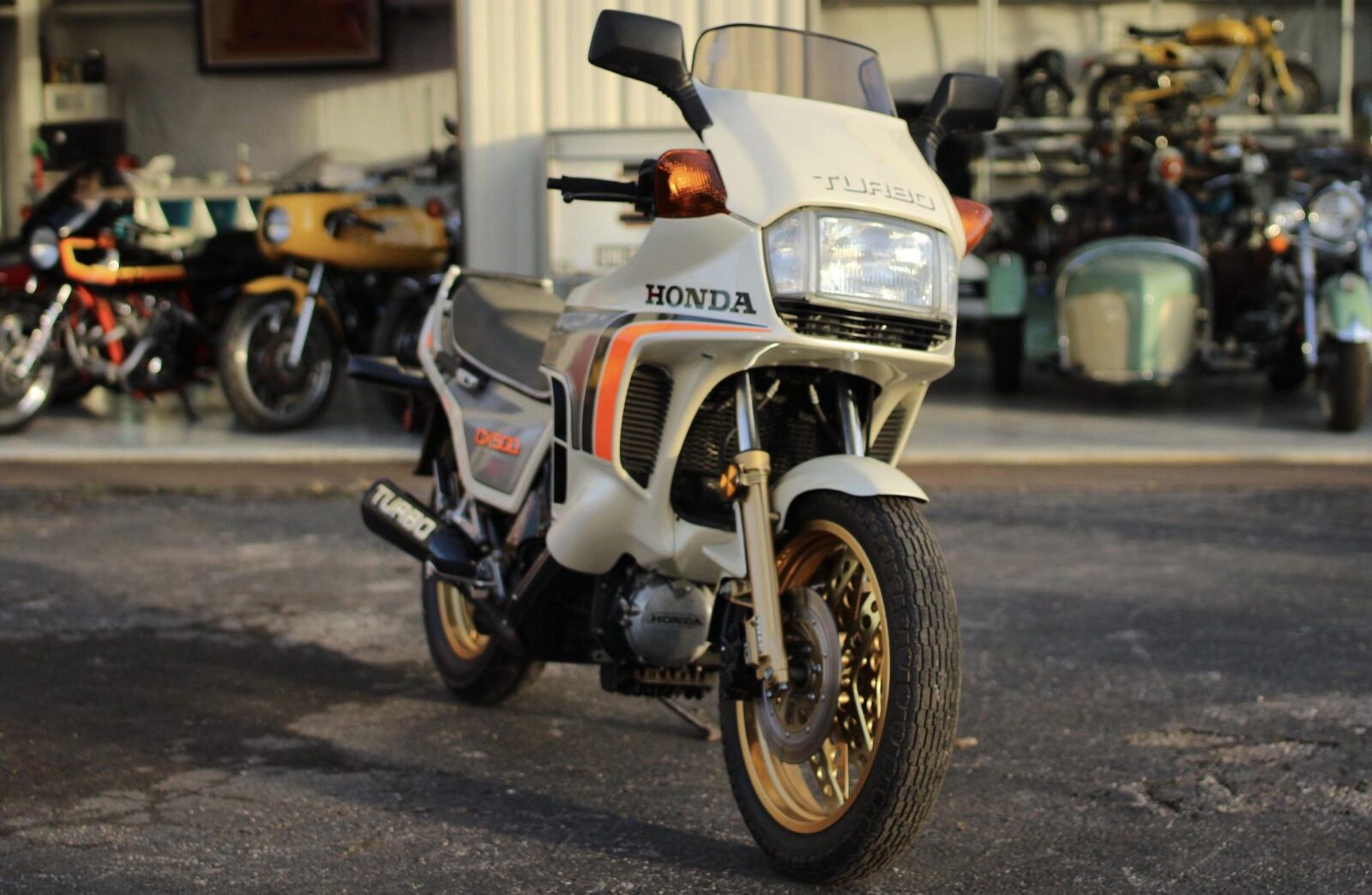 The Honda CX500 Turbo was a one-year-only model released in 1982 that helped fuel an arms race among the big four Japanese motorcycle manufacturers to produce ever faster and more powerful forced induction motorcycles.

The idea of turbocharging motorcycles wasn’t new in the early 1980s, the turbocharged Kawasaki Z1R-TC had first appeared in the late 1970s after all, but the 1980s was a time when turbocharging became the must-have thing and turbo badges on vehicles were worth their weight in gold.

The original non-turbo version of the Honda CX500 first appeared in 1978, it was an unusual motorcycle from Honda who had become famous for their genre-defining CB750 – the motorcycle for which the term “super bike” was coined. Whereas the Honda CB750 had a single overhead cam inline-four, the CX500 had a V-configuration that used more traditional pushrods, though at the same time it had four valves per cylinder and an advanced electronic ignition system. 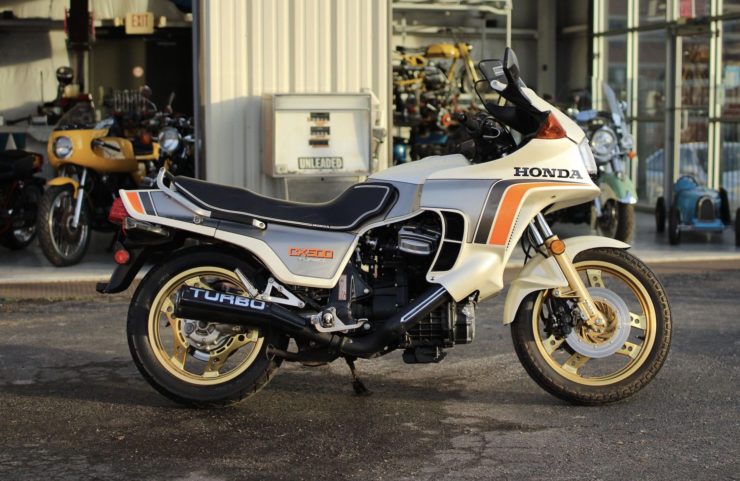 In a way the CX500 was a Japanese Moto Guzzi, the Italian company had become famous for their transversely-mounted V-twins with unit construction and a shaft drive system – all of which were used by the Honda also. The Honda varied from Moto Guzzi’s by using liquid-cooling, four-valves per cylinder, a modern digital ignition system, and a number of other tweaks.

The CX500 uses unit construction, with the transmission mounted in the same casing as the engine under the crankshaft. This makes the engine taller but Honda engineers made the crank and gearbox counter-rotating to cancel out the gyroscopic effect of the spinning crank and flywheel which otherwise would potentially pull the bike to one side.

The heads on the CX500 needed to be rotated 22° to keep the inlet tracts out of the way of the rider’s knees, this gives the engine a distinct look and made things more comfortable for longer-legged riders. Although the Honda CX500 was never the company’s best-selling motorcycle it did attract a following of owners who liked it for its quirky looks and unusual engineering.

When the Honda CX500 Turbo appeared in 1982 it sent a shockwave around the motorcycle world and Kawasaki, Suzuki, and Yamaha were soon to follow with their own production turbo motorcycles. Honda engineers worked with IHI to develop a new turbo, probably the smallest one in the world, with rotors measuring in at just 51mm (2 inches). 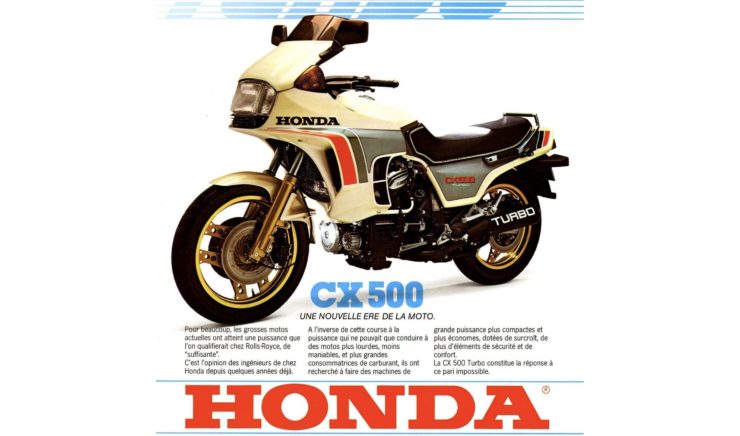 A series of changes were made to the engine in order to handle the significantly uprated power output from the turbocharged engine, up from 50 hp in the naturally aspirated CX500 to over 80 hp and almost 60 ft lbs of torque in the turbo version.

Perhaps the two key downsides to the CX500 Turbo was the model’s weight and the turbo lag it was susceptible to. The bike weighed in at over 260 kgs (579 lbs) when fuelled up and ready to ride and turbo lag could be significant, making the bike challenging to ride for less experienced owners.

The sales figures of the CX500 weren’t earth shattering and although Honda tried to upgrade it to make it more alluring the CX turbos left production forever by the end of 1983. Today they’re highly collectible due to their relative rarity and thanks in no small part to the fascination many people have with turbos on motorcycles.

The CX500 Turbo you see here is due to be sold by Bonhams at the Barber Museum auction on the 10th of October with no reserve, it has a price estimate of $5,500 to $7,500 USD and you can click here if you’s like to read more about it or register to bid. 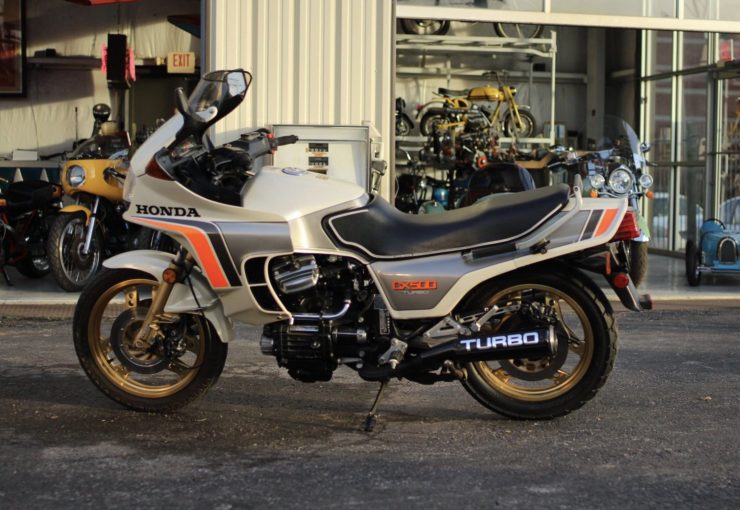 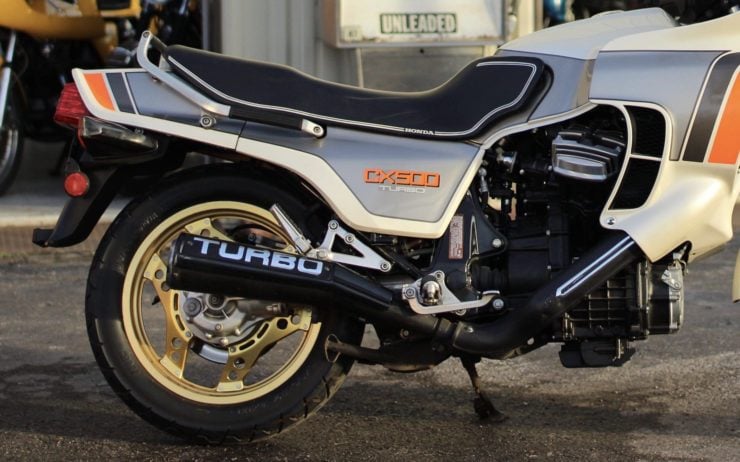 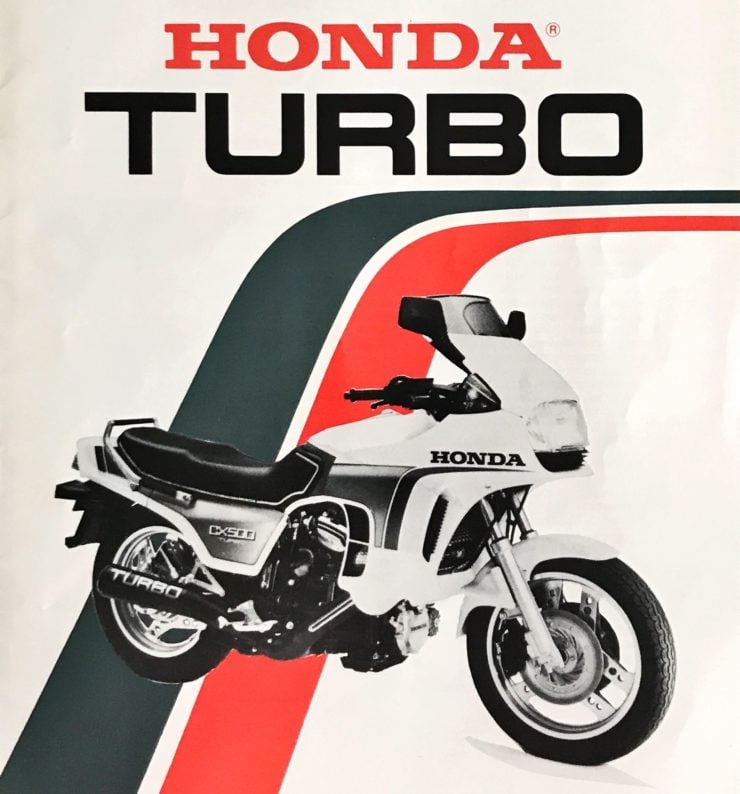