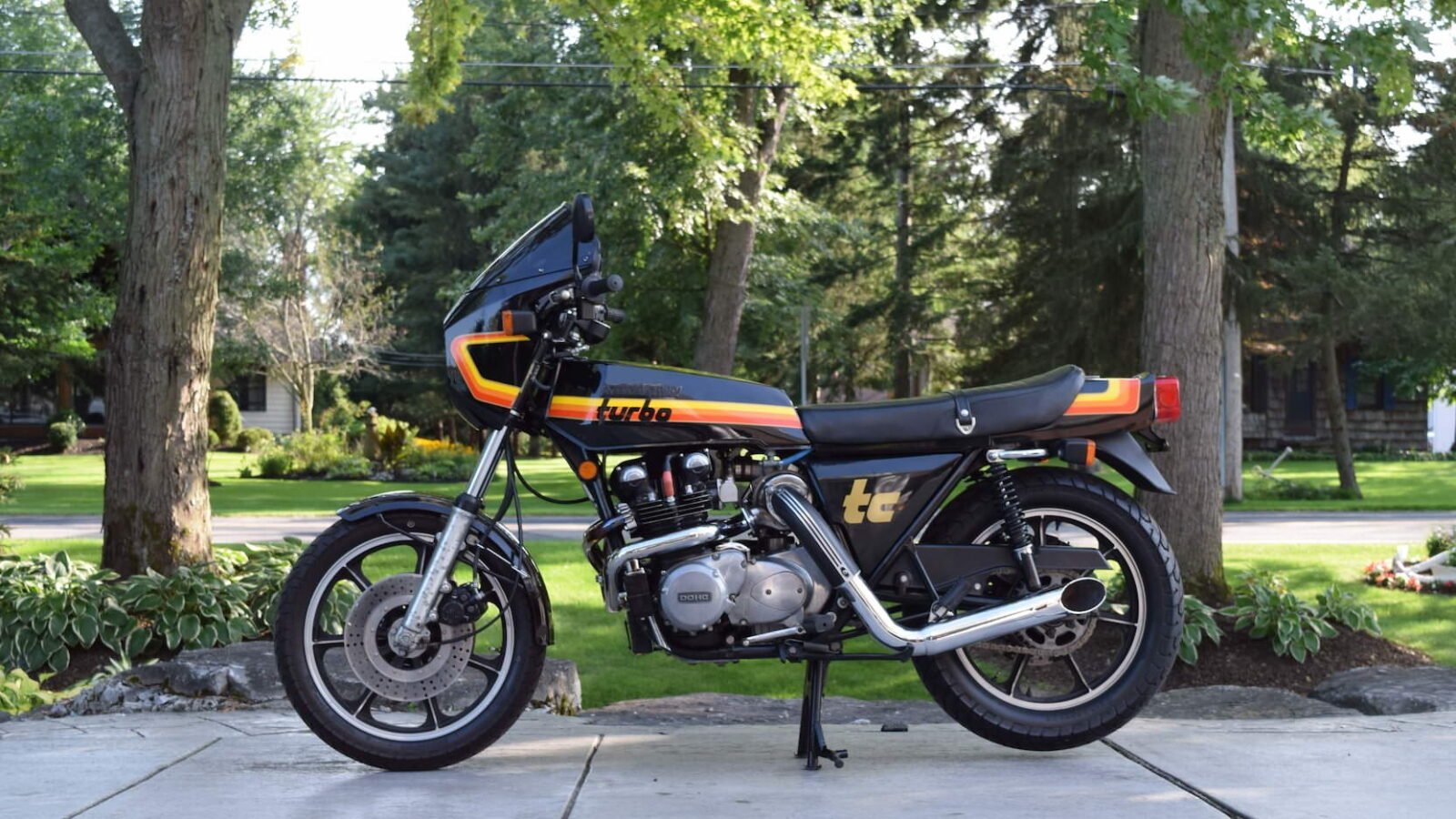 The Kawasaki Z1R-TC holds the distinction of being the first of what would become a rash of turbocharged Japanese motorcycles in the late ’70s and ’80s. It was an era that would see almost everything get a turbocharger attached, oftentimes resulting in turbo lag so bad it could only be measured in the geologic time scale.

The embrace of forced induction, usually turbos, was a result of increasingly stringent emissions requirements that were quite literally strangling engines – particularly in the USA. In very simple terms, turbocharging uses exhaust gas velocity to spin a turbine that compresses the fuel/air mixture before it enters the engine. This means more oxygen and fuel enters the cylinder, which means you get a bigger bang.

As the system uses exhaust gas velocity, energy that is otherwise wasted, it’s very fuel efficient. The major downside is that there can be a delay between the accelerator input and the turbo spooling up and sending the compressed intake charge into the engine. This delay is called turbo lag. Modern turbos often have almost no turbo lag at all, but back in the ’70s and ’80s it could be quite significant.

Kawasaki released the Z1R-TC in 1978, but it wasn’t purely a Kawasaki motorcycle. The Japanese factory sent stock Z1Rs over to the USA, where they were modified by the Turbo Cycle Company, which was run by former Kawasaki executive Alan Masek.

Once they arrived at the US factory the stock exhaust and carburetor were removed, new collectors/headers were fitted along with an ATP turbo, an adjustable wastegate, an open exhaust, and a Bendix carburetor. A boost gauge was also added to the instrument panel, along with a new set of decals, and a pile of legal paperwork (including a liability waiver) that had to be signed by any prospective owner before they were allowed to buy a Z1R-TC off the Kawasaki showroom floor. 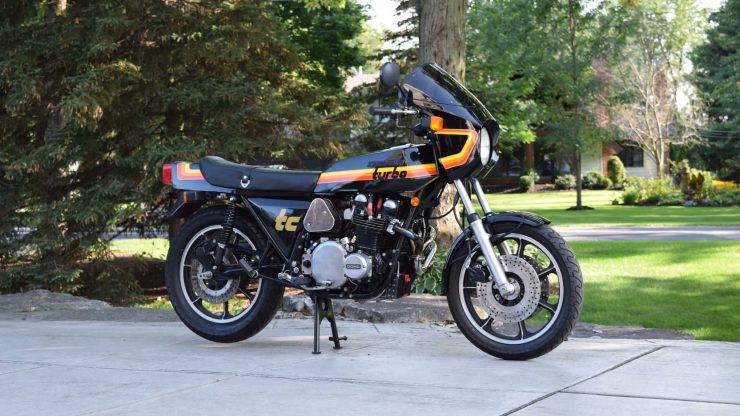 Turbocharging gave the Z1R-TC 130 hp (at 8500 rpm), an obscene figure for the late 1970s, made all the more challenging by the fact it was perhaps a little under equipped in the suspension and brakes department.

These first year bikes were legendary for requiring skilled riders, and the engineering wasn’t quite as polished as it could have been. But owners quickly realized that their new bikes were capable of sub-11 second quarter mile times at 125+ mph – that is until the clutch exploded or they tank-slappered themselves into the fence.

Kawasaki and the Turbo Cycle Company worked to resolve the teething issues with the ’78 model, and the ’79 Z1R-TC was a more refined motorcycle with a new 4-into-1 collector, reduced turbo lag, a lower wastegate pressure setting, and a few other small improvements.

In 1980 new emissions legislation was created in California that banned modifications to exhaust systems, and as the Kawasaki Z1R-TC was having its entire exhaust and intake system modified by a third party company it would never have been legal. Production ended at the close of 1979, 500 or so examples had been sold and today they’re considered rare and rather interesting – if a little intimidating to new riders. 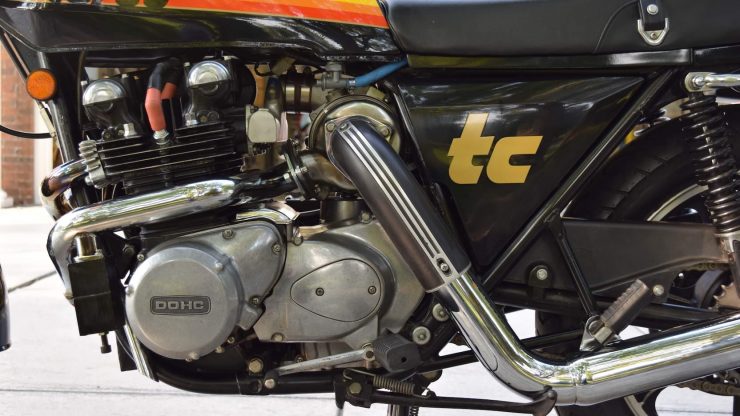 The bike you see here is from the first year of production, so it’s a little more raw and a little more powerful than the models that would be made in 1979.

It’s presented in good condition over all, with 14,447 miles on odometer. It’s still accompanied by the original product brochure and receipts from previous work done, and its original decals appear to be in excellent condition too.

It’s not often we see one of these come up for sale, so it’ll be interesting to see what this one goes for when it crosses the auction block with Mecum between the 23rd and 27th of January. If you’d like to read more about it or register to bid you can click here to visit the listing. 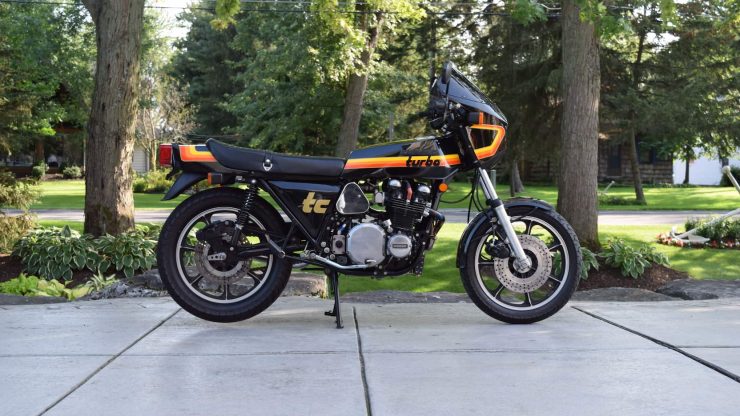 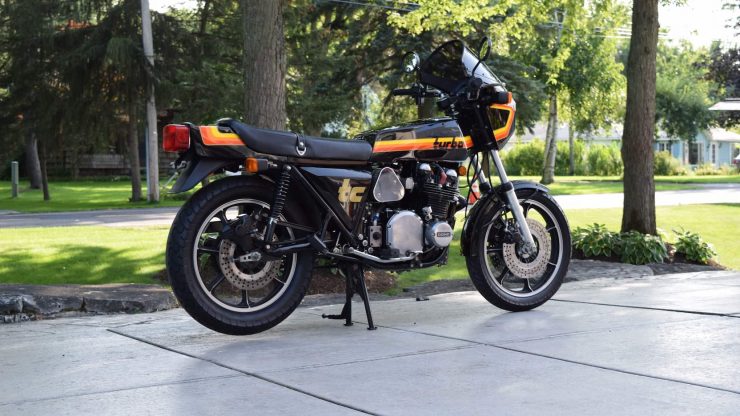 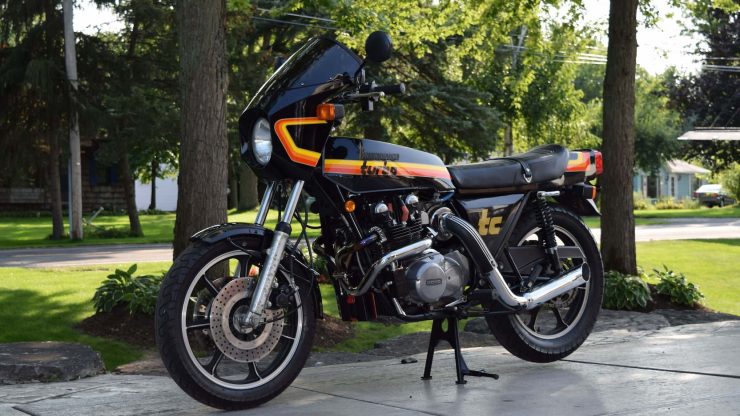 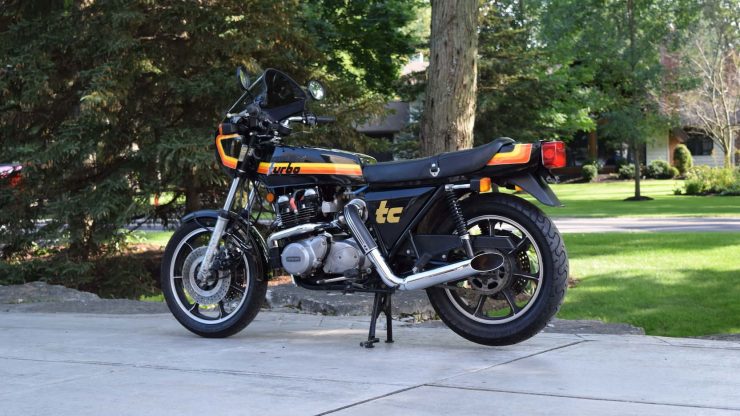 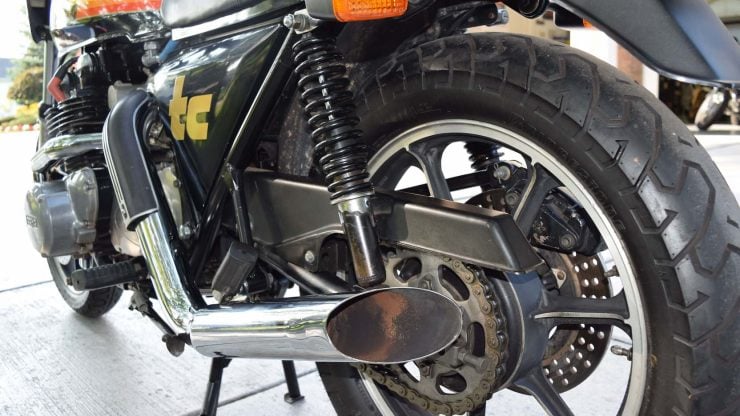 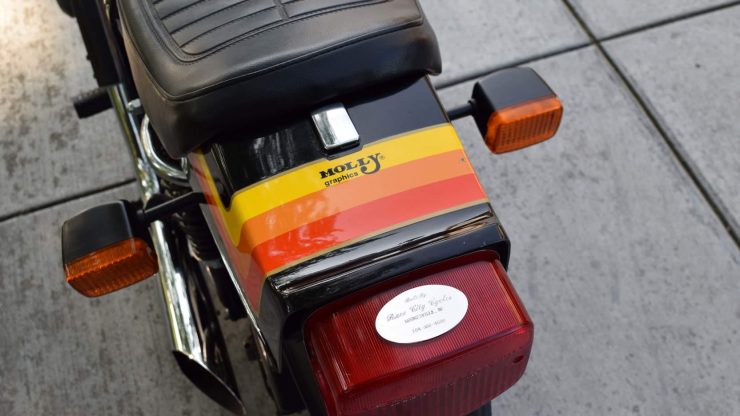 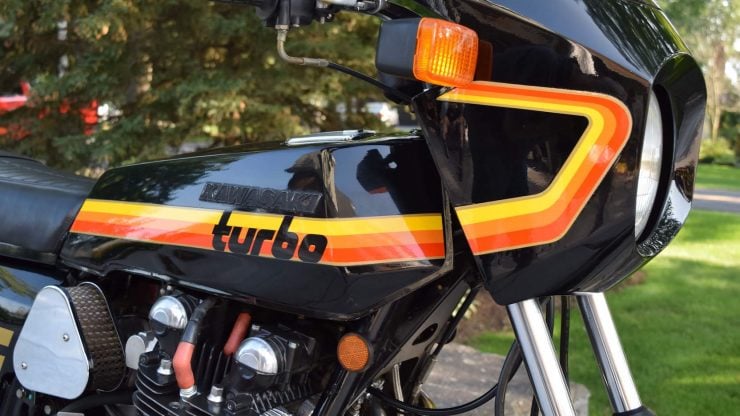 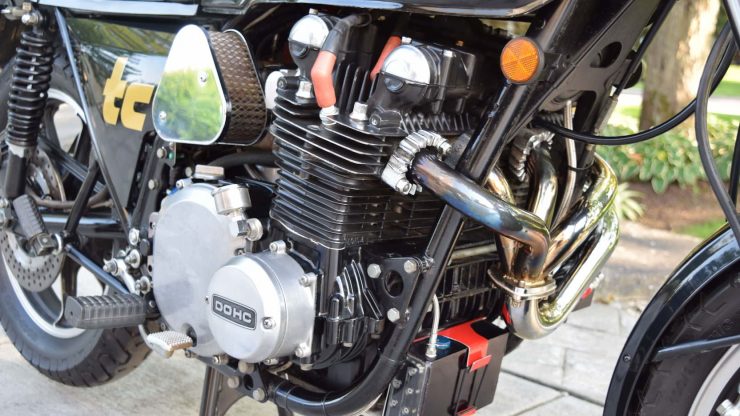 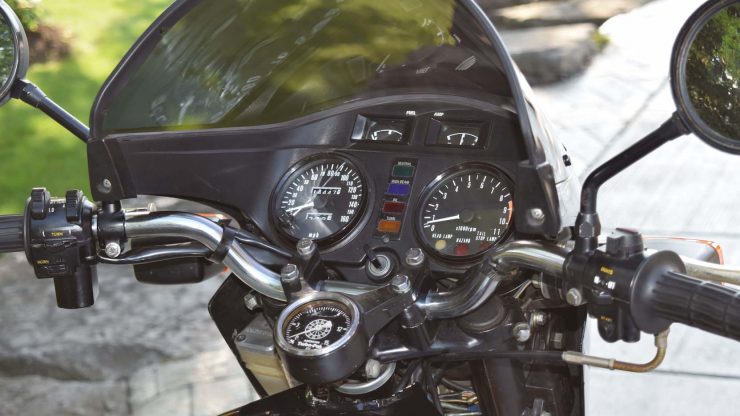 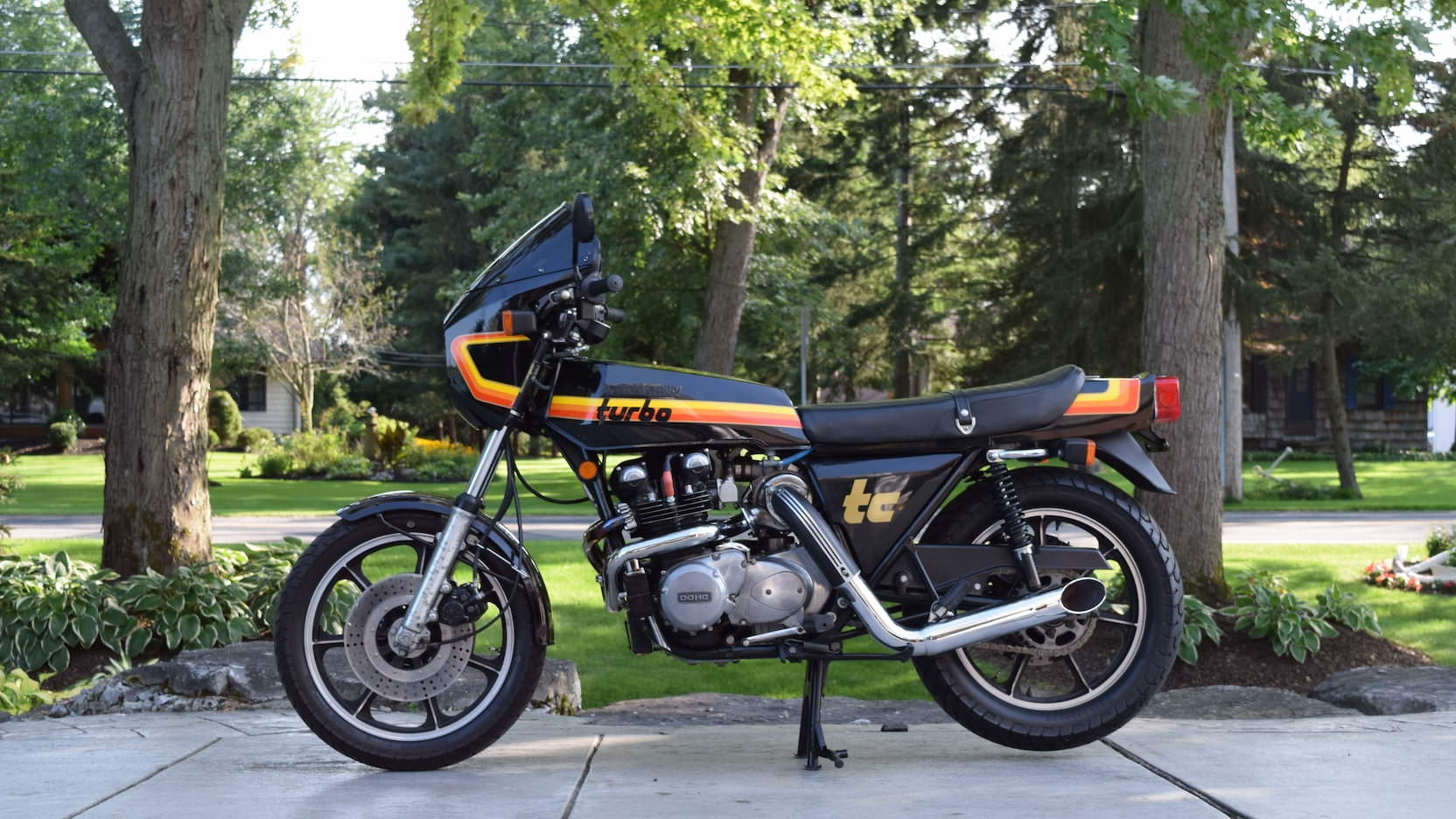