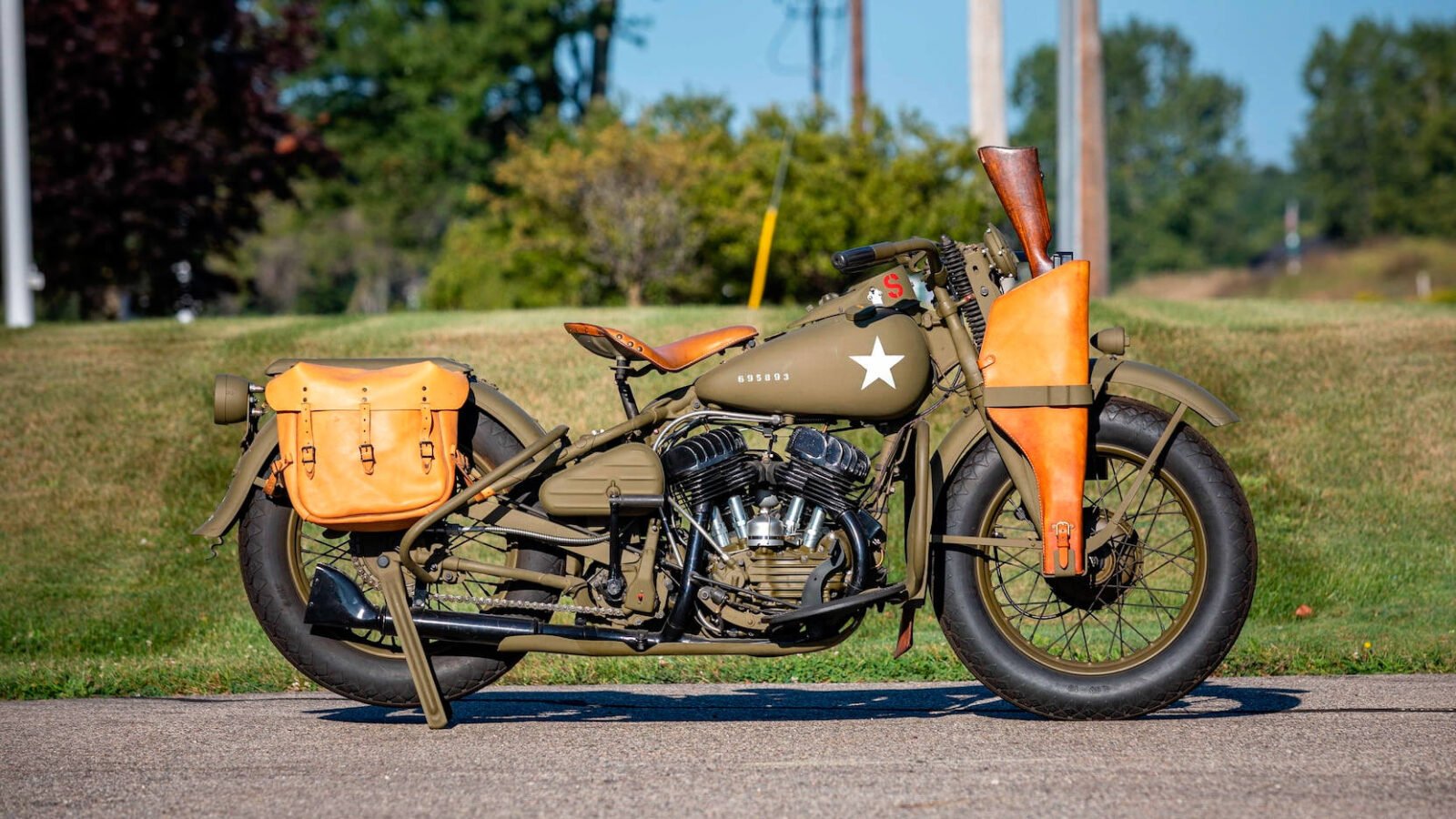 The WLA was created for military use during the Second World War – over the course of the conflict the tens of thousands of WLAs that were built would see service in the deserts of North Africa, the towns, cities, and forests of Europe, and throughout Asia and the tropical islands of the south Pacific.

How Harley Built “The Motorcycle That Won The War”

By the late 1930s it became clear that another world war was likely, much of East Asia was already at war and Hitler’s ambitions for European domination weren’t a particularly well-kept secret. As a result of this Harley-Davidson began developing a series of military motorcycles, the most famous of which would be the WLA. 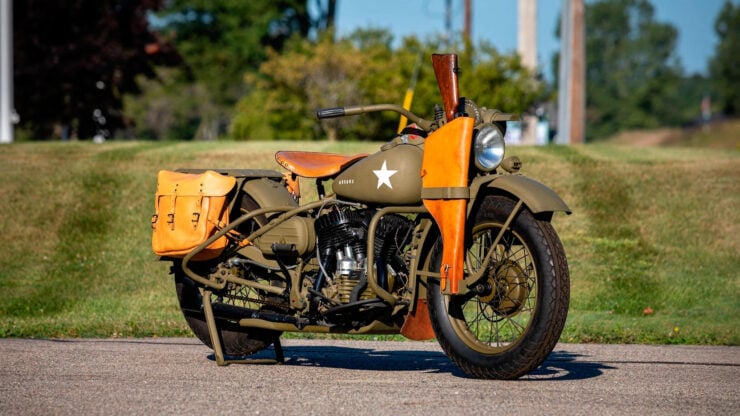 This restored Harley-Davidson WLA is finished in olive drab and it’s been equipped with period-correct ammunition cases, a leather rifle scabbard, and a non-functioning Tommy gun.

The model name WLA follows the standard Harley model code, “W” is the family of motorcycles, “L” means high-compression, and “A” stands for Army.

Although we associate high-compression with performance nowadays, back in 1939 the WLA’s compression ratio of just 5:1 classed it as high-compression, it retained the ability to run on low quality fuel down to 74 octane gasoline which was critical during the war.

Rather than using one of their newer, more complex overhead valve engines in the WLA, Harley opted to use their tried and tested flathead (side valve) V-twin. Though less powerful than its OHV siblings the flathead was tough, reliable, cheap, and easy to build in vast numbers.

With a swept capacity of 45 cubic inches (740cc) the air-cooled 45º V-twin was capable of 25 hp at 5,400 rpm. Power was sent back via a 3-speed transmission with a hand shifter, and there was a chain drive to the rear wheels.

Above Video: This is a wartime training film for new recruits, it shows the WLA being ridden off-road in challenging environments by skilled riders.

The total weight of the WLA was relatively high, it tipped the scales at 540 lbs, which made riding it off-road a significant challenge for anyone – let alone new 18 year old recruits who had never ridden a motorcycle before.

All of that said, the modifications made to the WLA for military and off-road use made it a solid and relatively rugged machine when used off-road everywhere from the deserts of North Africa to the muddy bogs of Europe and the beaches of the South Pacific.

The exact changes applied to the WLA did vary depending on year of production and sub-designation however most had some combination of the following: a skid/bash plate under the engine for protection, a heavy-duty luggage rack, crash bars on either side, blackout lights, simplified fenders for shedding mud, an oil bath air cleaner, and either an olive drab or black paint scheme.

Interestingly almost all Harley-Davidson WLAs that were produced were stamped as 1942 models, likely because they were built to this specification. A small number of special Canadian motorcycles were built with the WLC designation, and many examples of the WLA were sent to Allied countries including Britain, Australia, Canada, New Zealand, and the Soviet Union – in fact the USSR received over 30,000 of them. 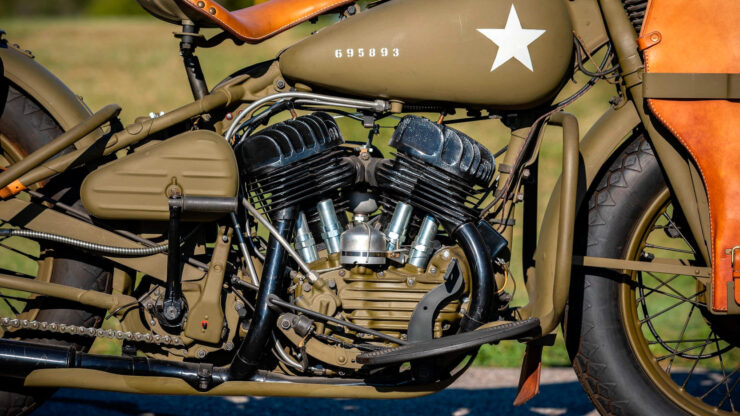 The mechanically simple air-cooled 45º V-twin is capable of 25 hp at 5,400 rpm. It’s a simpler flathead/side-valve design that proved remarkably reliable and resilient.

The vast majority of WLAs used during the war were sold into civilian hands as military surplus after the war. Most were civilianized and many were turned into custom bobbers, then later into custom choppers.

The rise of American motorcycle gangs after WWII, some of whom were formed by disaffected, returned GIs, often rode modified Harley-Davidson WLAs and the link between outlaw biker gangs and the Harley-Davidson marque was formed.

Today it’s far more difficult to find an original WLA than it is to find a civilianized or modified example. 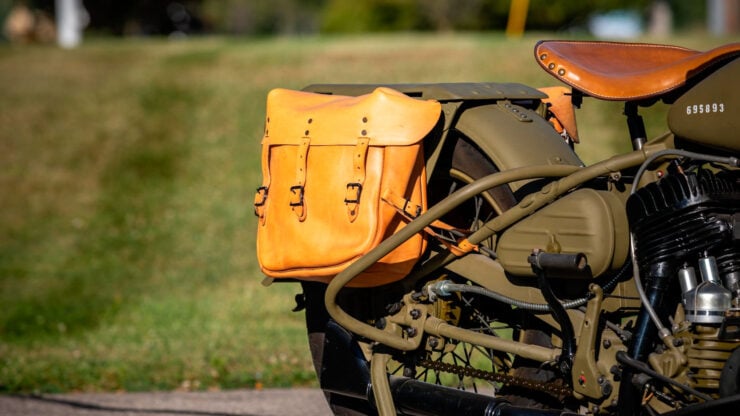 The rear luggage rack could be used for a multitude of purposes including carrying radio equipment, radio jamming equipment, and even fellow soldiers to save them walking.

The WLA you see here has been meticulously restored by a marque expert, it’s been finished in the most common paint scheme – a matte olive drab.

A number of period-correct parts have been fitted including ammunition boxes, blackout lights, a military oil bath air cleaner, the under sump skid plate, front and rear crash bars, and the front mounted rifle scabbard containing a non-firing Tommy gun.

If you’d like to read more about this WLA or register to bid you can click here to visit the listing on Mecum. It’s due to roll across the auction block in late January in Las Vegas, Nevada. 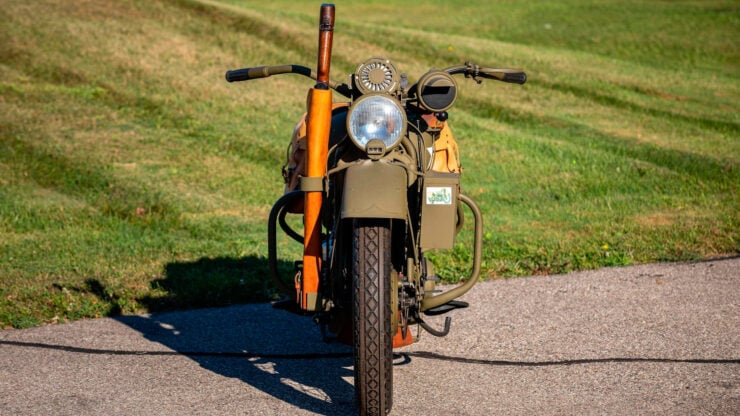 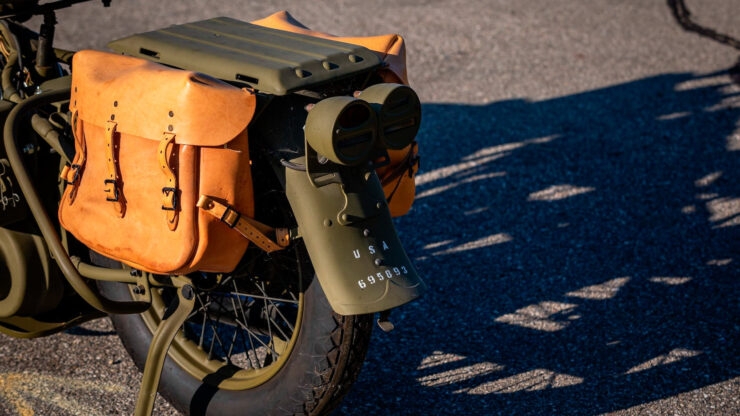 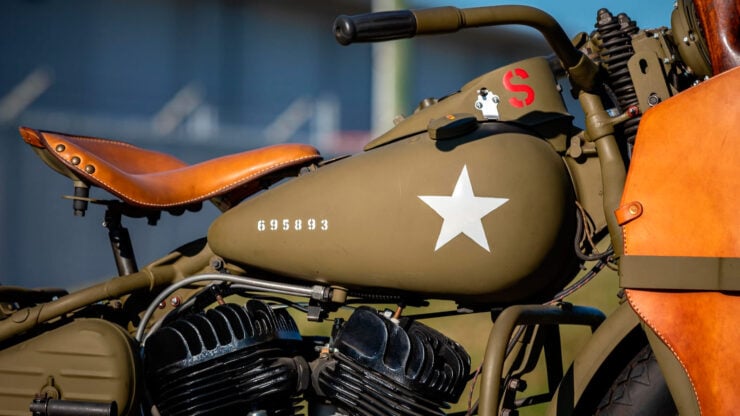 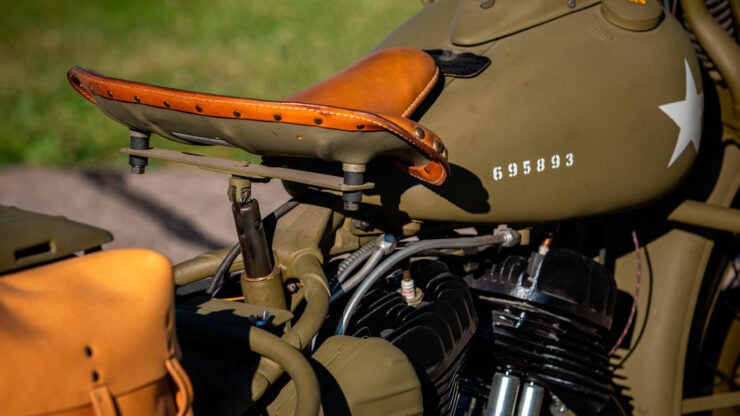 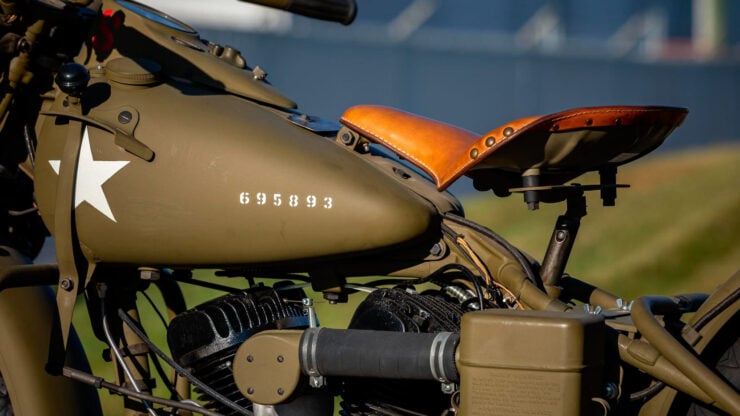 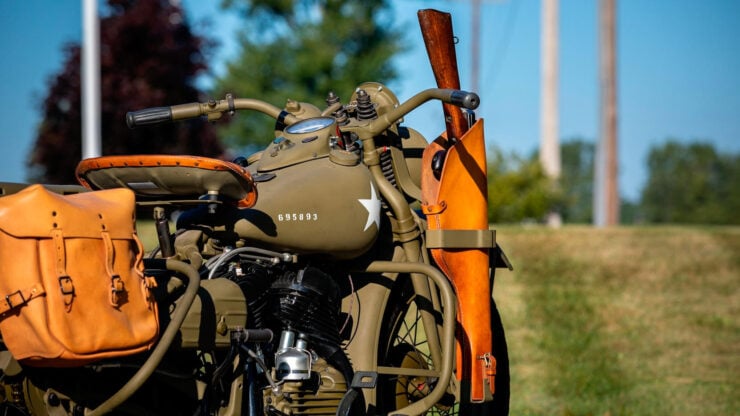 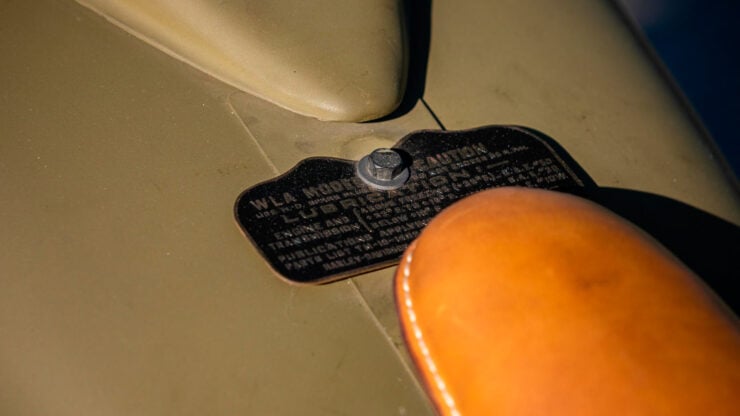 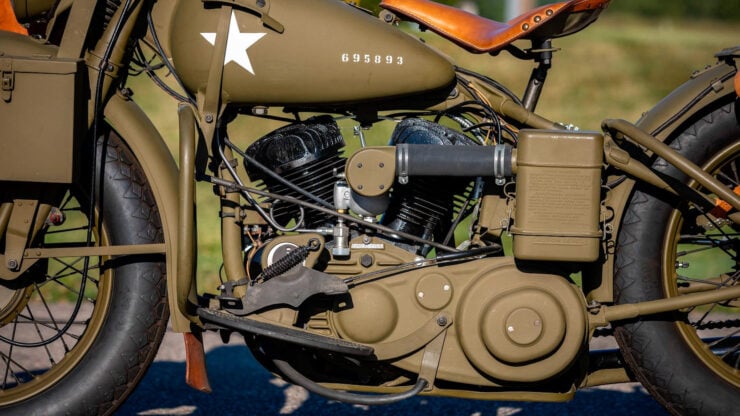 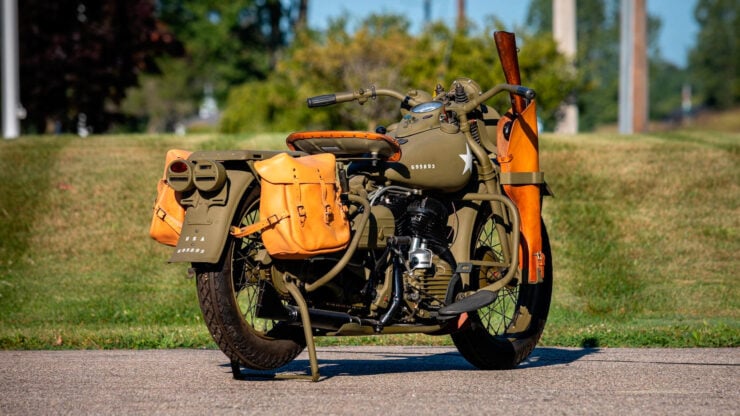 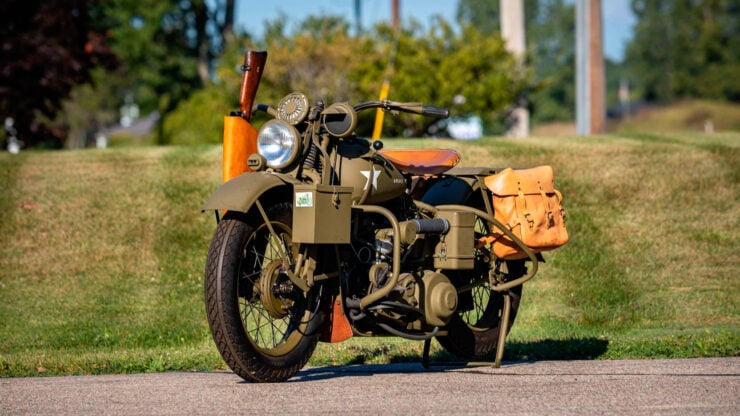 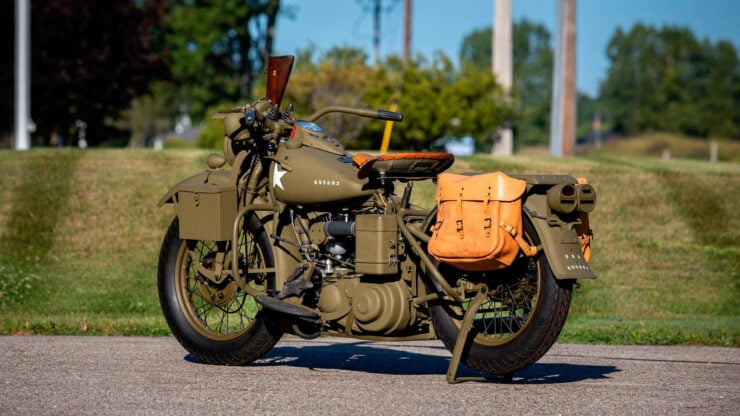 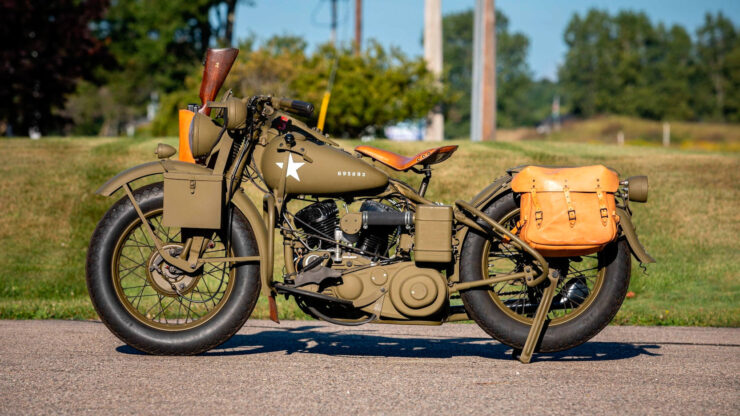