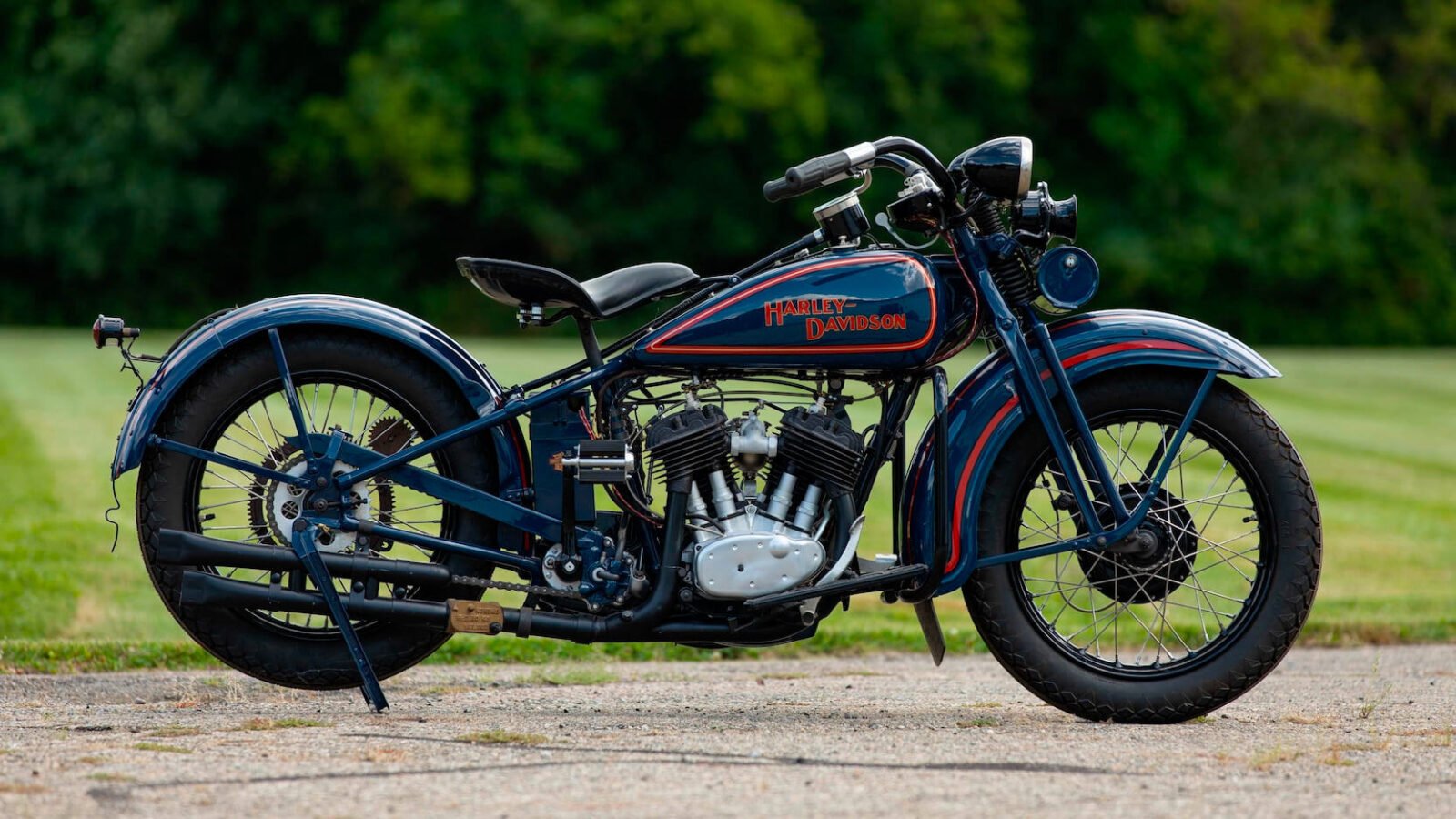 In 1929 Harley-Davidson released the 45 cubic inch Model D as an answer to the wildly successful Indian Scout 101. These were considered middle weight motorcycles with their 750cc capacity, they were affordable to the average Joe and they consumed less fuel than their 1,000cc siblings at the top of the range.

It’s unlikely that anyone at Harley-Davidson knew that 1929 would also see the arrival of the Great Depression, however the Model D positioned them perfectly for the economic downturn. The Model D only cost $290 ($4,650 in 2021 dollars) and so it was ideal vehicle for cheap daily transportation for many Americans.

In the 1920s Harley-Davidson was engaged in a national sales battle with the Indian Motocycle Company, both fielded race teams, took part in endurance and speed record setting events, and matched each others models and prices chasing sales. 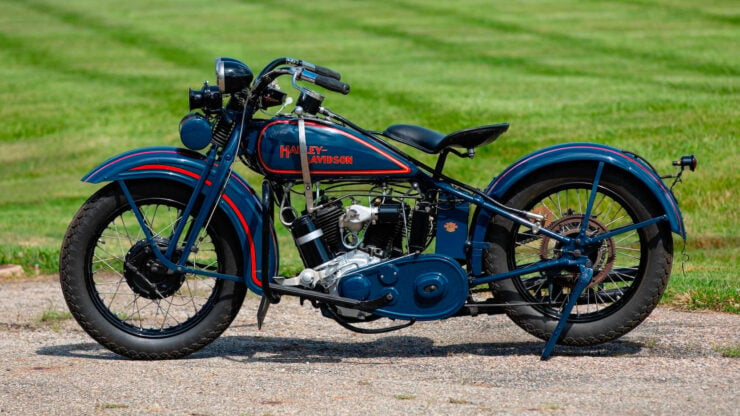 The beautiful lines of the Model D have been winning it fans for almost 100 years. The forward-leaning vertical generator led to the bike being nicknamed the “three-cylinder Harley.”

When the Excelsior Motor Manufacturing & Supply Company released the Excelsior Super X in 1925 with its 45 cubic inch engine and an affordable price tag they triggered an arms race among American motorcycle manufacturers who wanted to carve out their own territory in the 45 cubic inch niche.

Indian went first with their 101 Scout, followed by Harley-Davidson in 1929 with the Model D. Development of the Model D had been entrusted to engineer Arthur Constantine. He realized that much of the success of the 101 Scout was down to its lightweight build, and so he developed the Model D starting with one of Harley-Davidson’s pre-existing single-cylinder motorcycle frames.

A 45 cubic inch flathead (side valve) V-twin was developed, originally with 15 hp however this climbed to 18.5 hp and then finally to 20 hp as the compression ratio was increased. Power was sent to the rear wheel via a 3-speed hand shifter and a chain final drive.

In order to set it apart from its competition, the Model D received twin “bullet” headlights rather than a single unit, and it was fitted with a vertical generator, this gave rise to it being called the “three cylinder Harley.”

From its release in 1929 the Model D played a critical role in keeping Harley-Davidson in business through the 10 years of the Great Depression. Later in the 1930s Harley-Davidson would develop the WLA military motorcycle based on many of the lessons learned with the Model D, and it used a version of the same flathead engine. 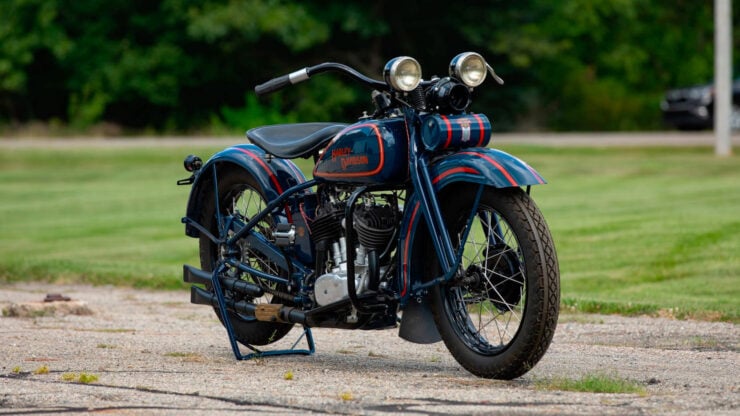 The Model D became famous for its twin “bullet” headlights, a design feature that has been used on a number of Harley-Davidsons in the years since.

The motorcycle you see here is a Model D from 1930, just the second year of production. As you would expect it features the original vertical generator and 3-speed hand shift, it also has an electric klaxon horn, the signature twin bullet headlights, an an I-beam fork up front.

This Model D was carefully restored by a marque specialist and it remains in excellent condition throughout, looking almost like it just rolled off the production line in Milwaukee earlier in the day.

If you’d like to read more or register to bid you can click here, it’s due to roll across the auction block with Mecum in late January at their Las Vegas Motorcycle Auction. 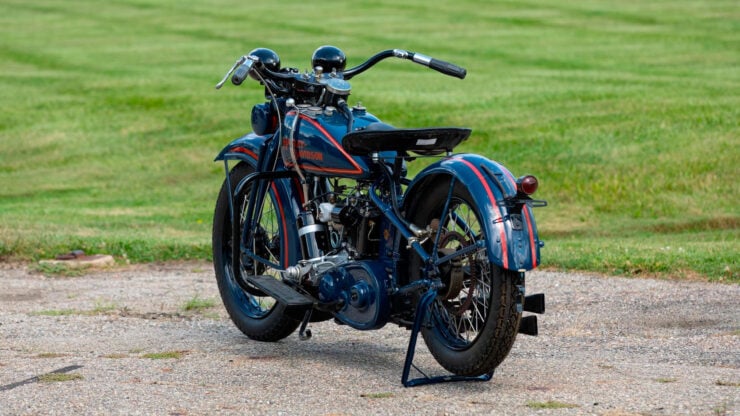 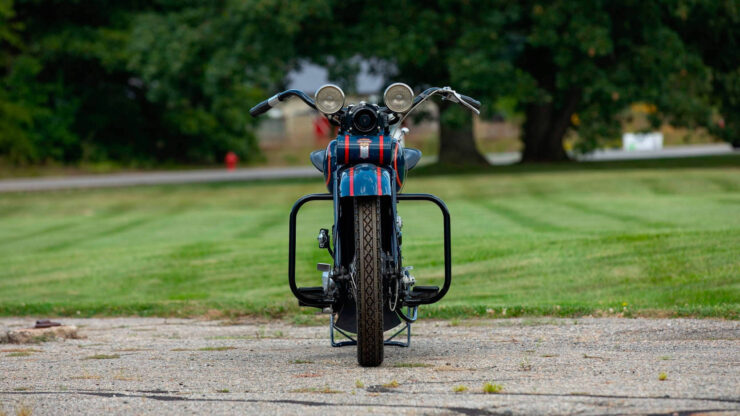 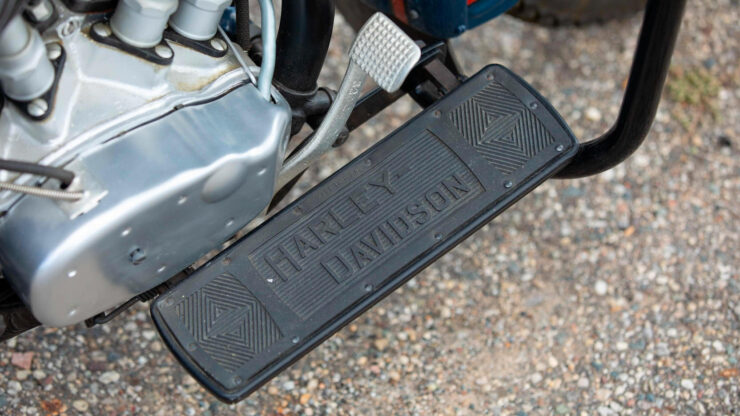 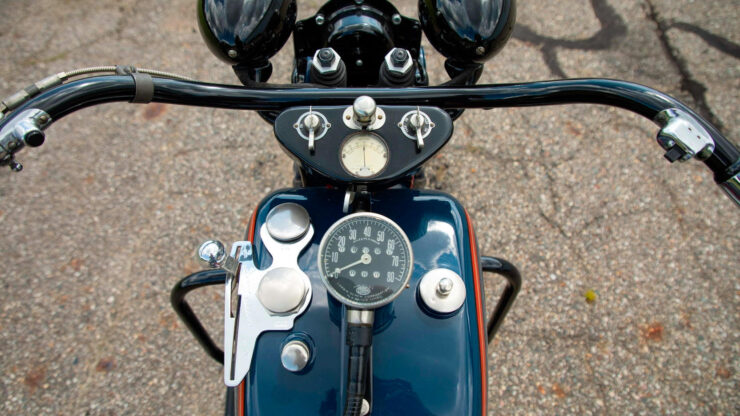 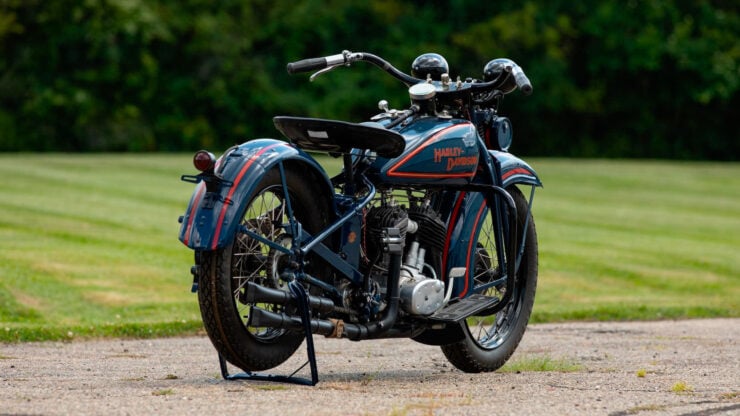 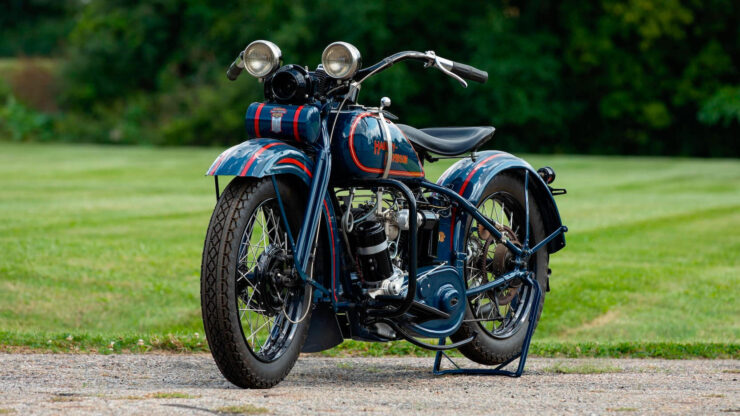 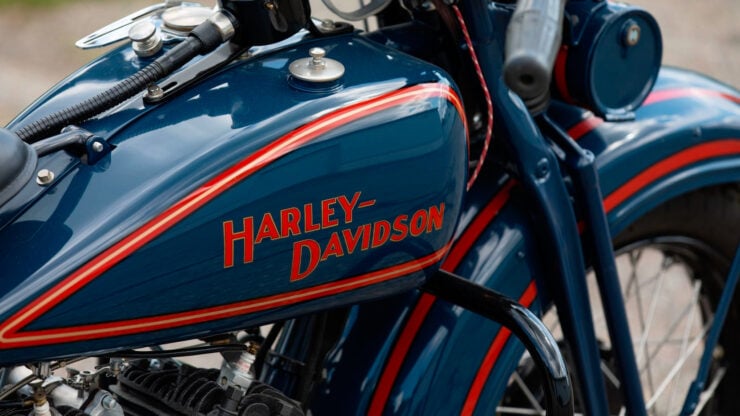 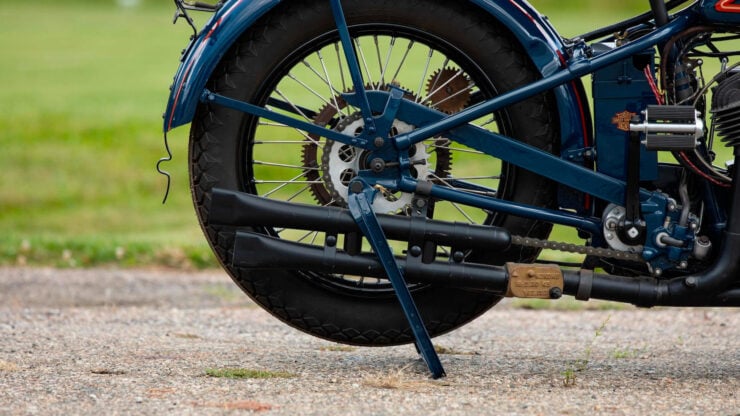 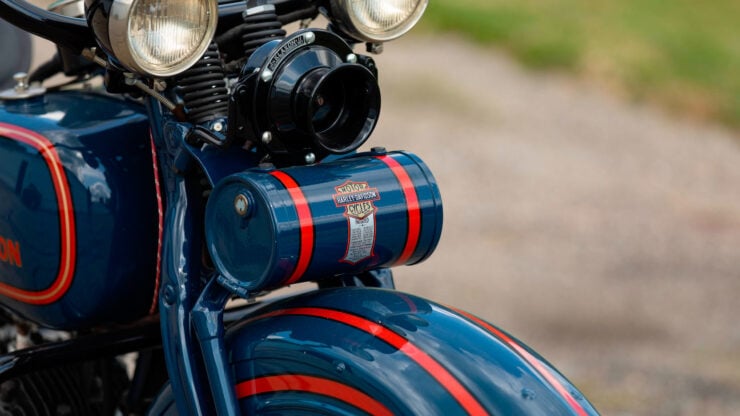 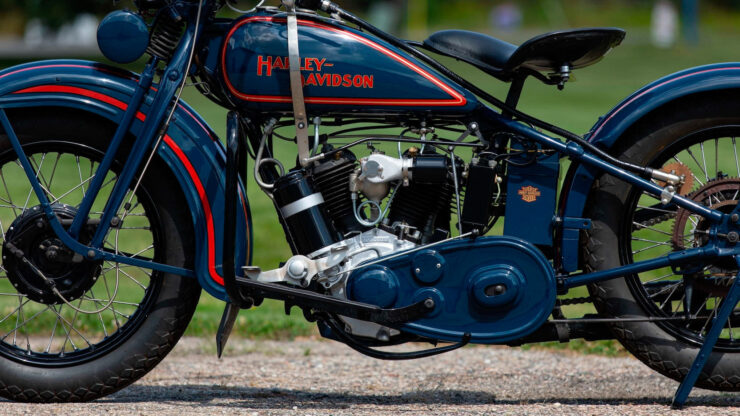 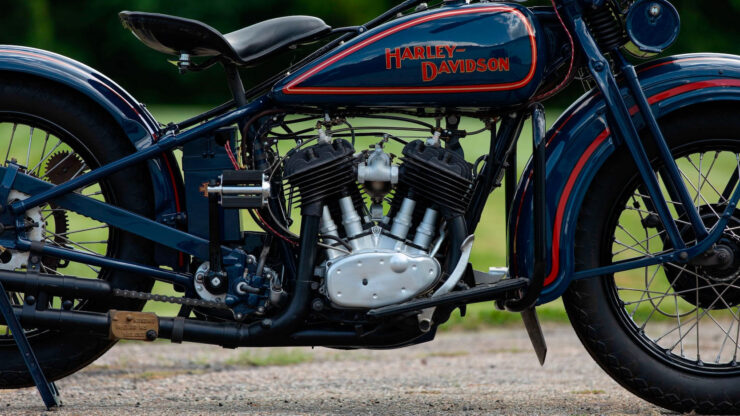 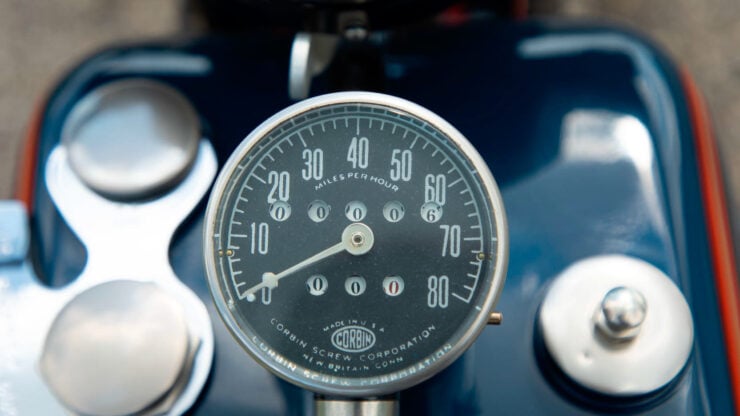 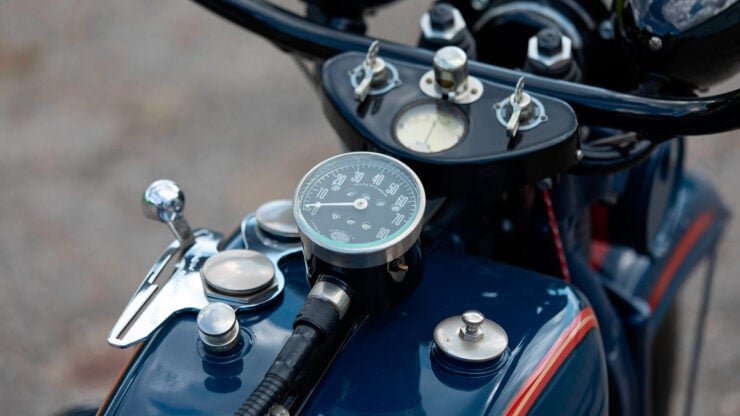 Published by Ben Branch - October 26th 2021
Related Posts
A 1968 Fuji Go-Devil: The Folding Motorcycle That Fits In A Suitcase