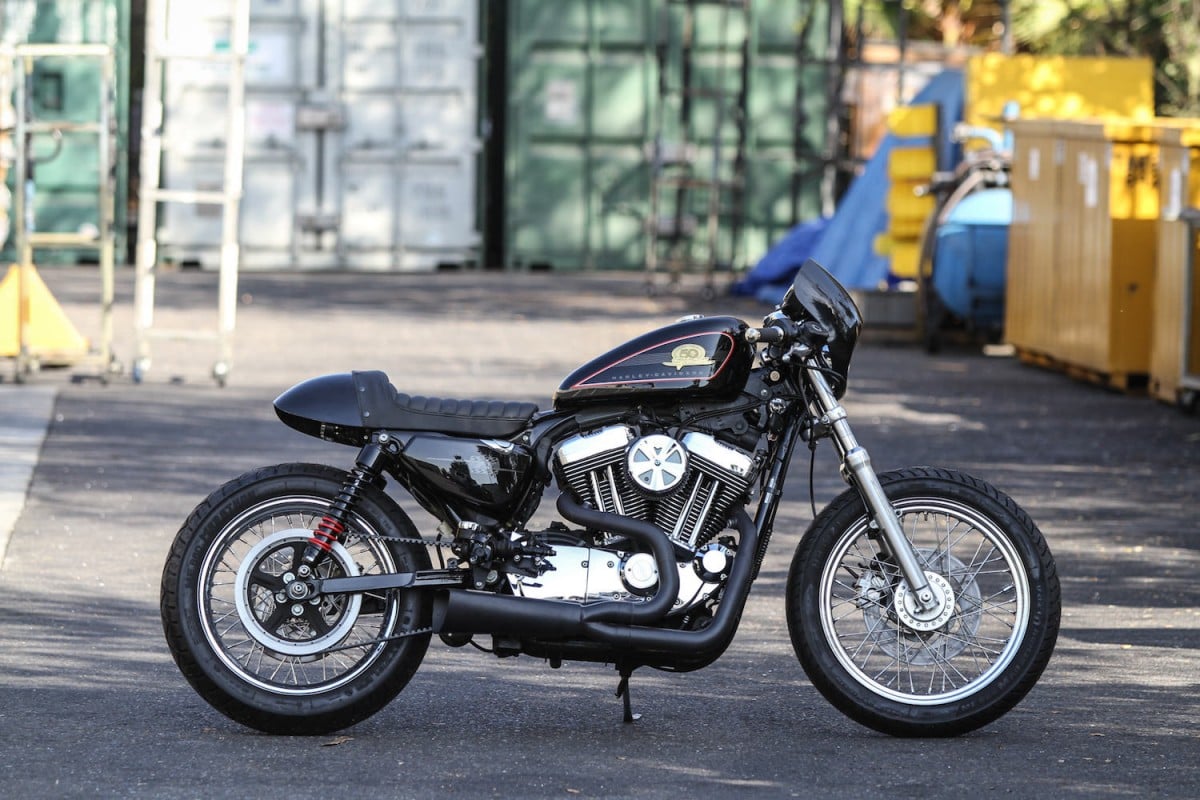 Harley-Davidson Sportster cafe racers are becoming so popular it’s almost worth giving them their own genre. A superficial look at the motorcycles produced by Harley would tend to give you the impression that they’re not particularly well suited to cafe-racerization – they’re heavy and cumbersome with relatively primitive engines and a riding position almost better suited to having a nap than charging through the twisties.

That said, something magical happens to the Sportster when you strip away unnecessary parts, improve the suspension, allow the engine to breathe freely and lean the riding position forward. It quickly becomes a motorcycle that Harley-Davidson could produce if they wanted to, but choose not to for reasons that defy my understanding.

You see, the Sportster started life in 1957 as a motorcycle with far more in common with the Triumph Bonneville than a highway tourer. The model quickly became the best seller in the Harley range and today the Sportster is the longest running model in Harley-Davidson history – make sure you tell that to anyone who tries to tell you that a “real” Harley is something akin to an 800lb two-wheeled Cadillac. 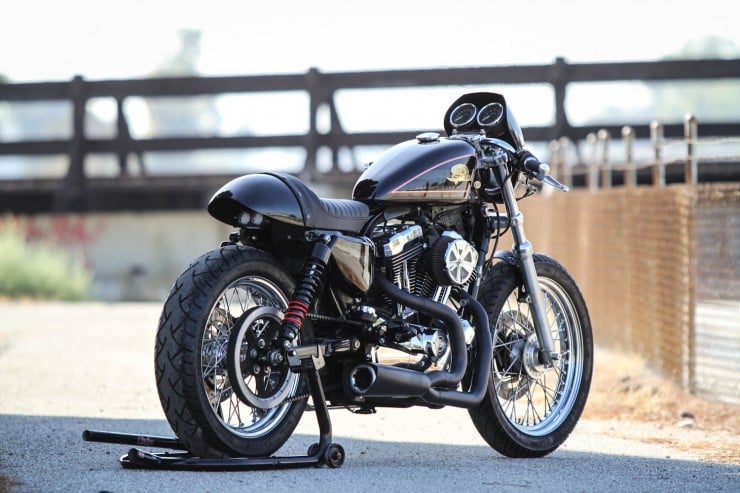 The amount of work required to take a stock Sportster and turn it into a bike like the one you see here is relatively minor all things considered – The original seat was removed in favour of a Burly Café Tail, Burly Clubman Bars replaced the standard handlebars and the forks were stripped and rebuilt with Burly lowered fork springs and preload adjusters. With a view to safety and a healthy respect for the danger of a tank slapper a Roland Sands Design front fork brace was boiled into place (PSA: please remember to brace your forks if you’re going to remove the fender).

In order to allow the engine to breathe properly a Vance & Hines air cleaner replaced the stock unit and a matching set of Vance & Hines 2-into-1 pipes were added and the carburettor was re-jetted to match.

The completed bike is a great example of what can be achieved with not a lot of money and some basic hand tools, if you’d like to see more Sportster-based cafe racers like this you can click here. 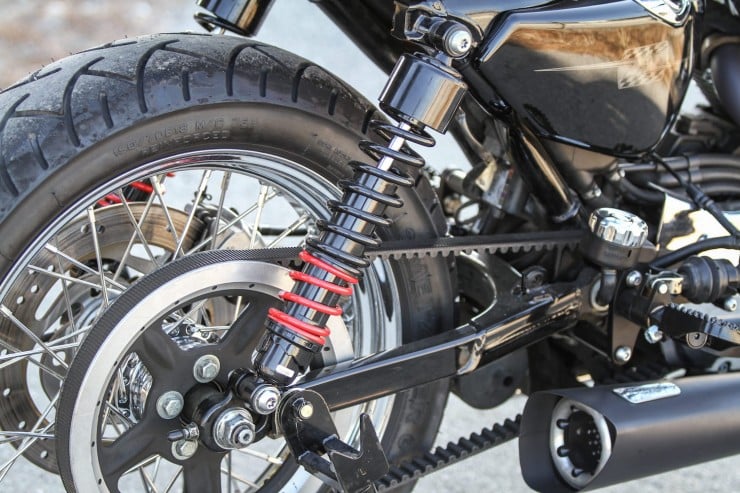 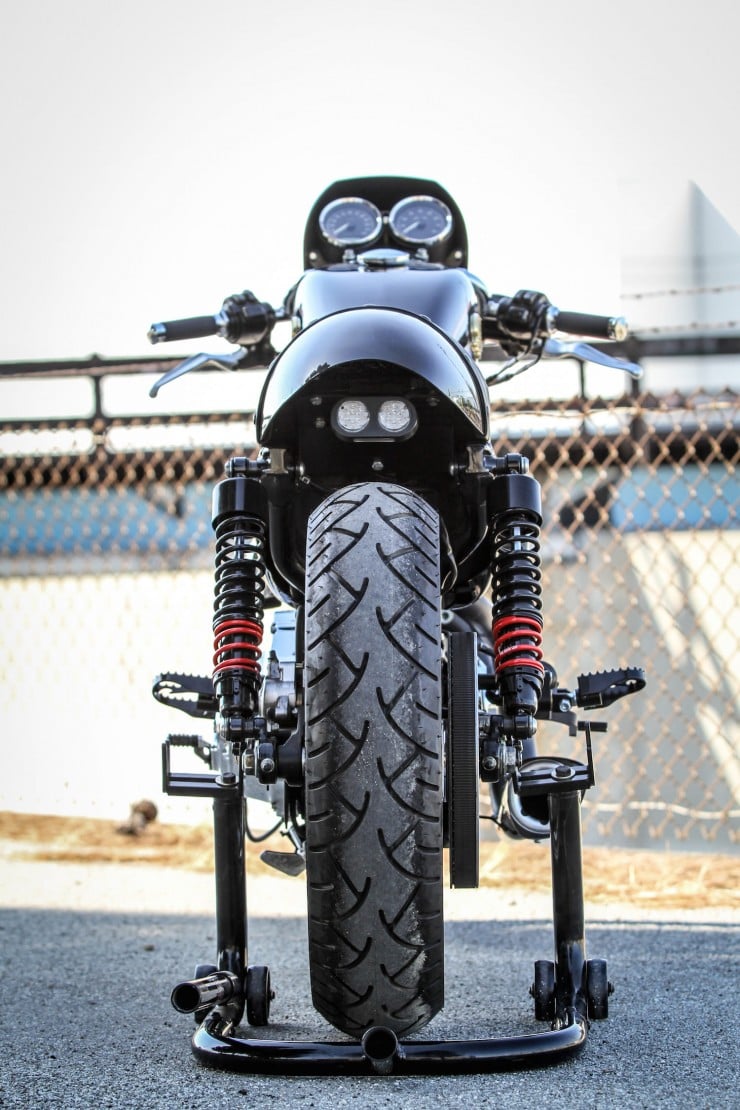 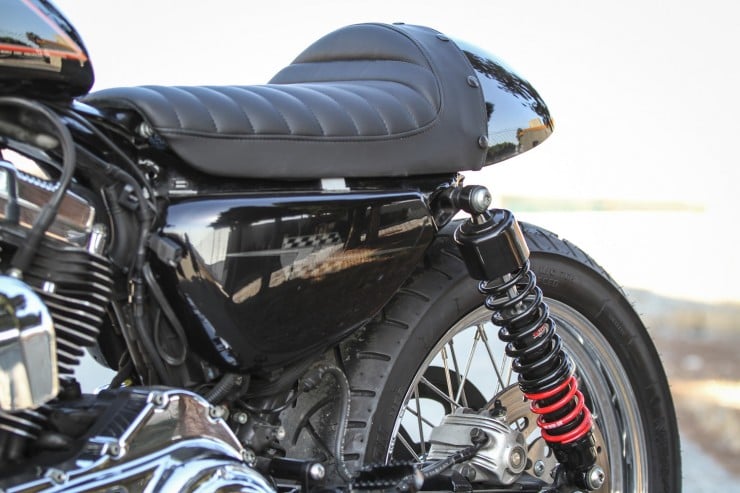 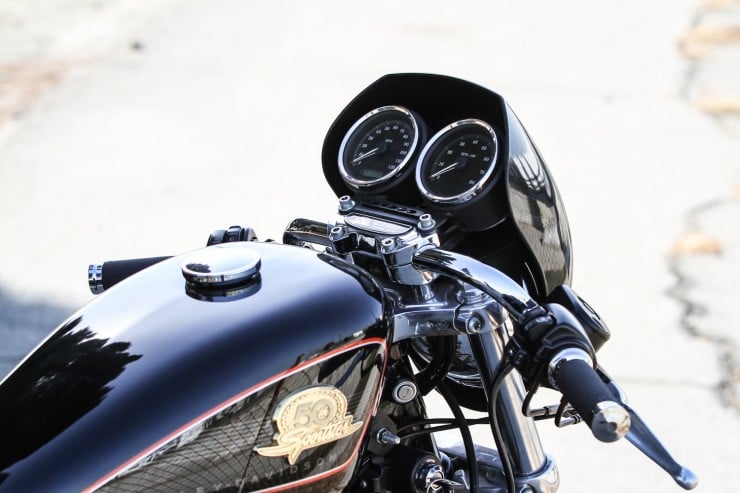 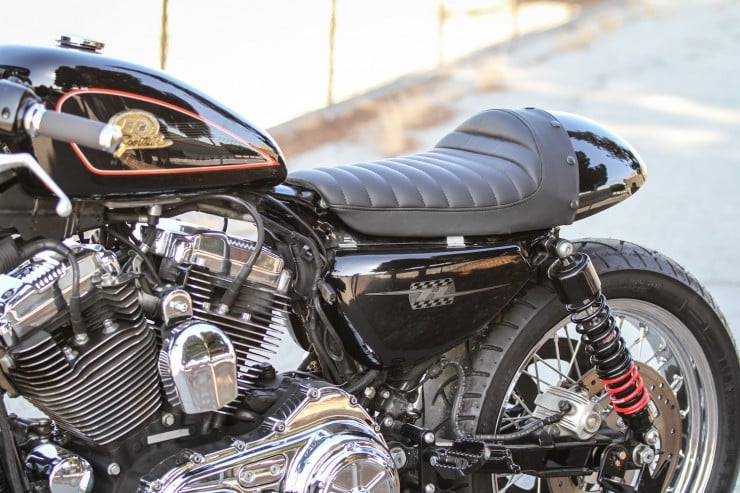 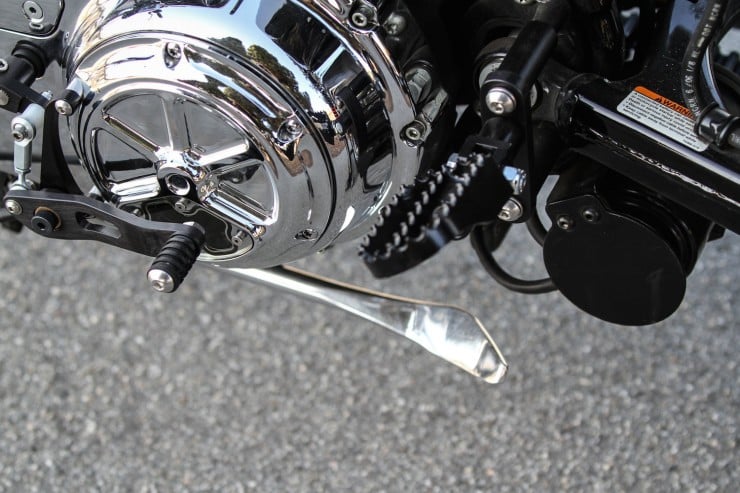 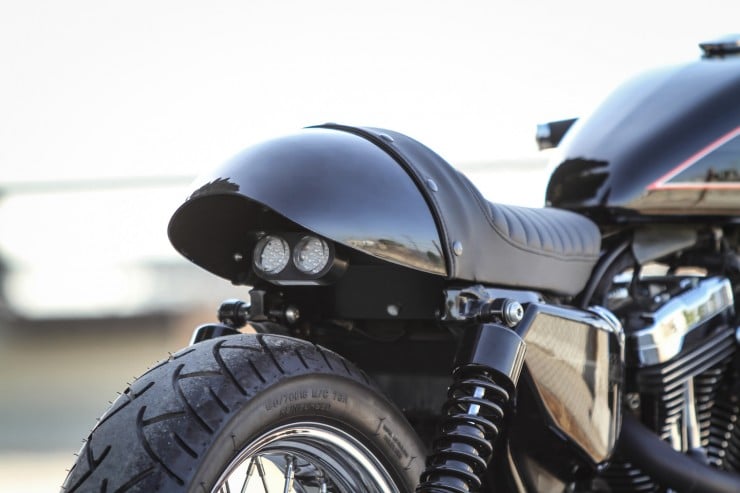 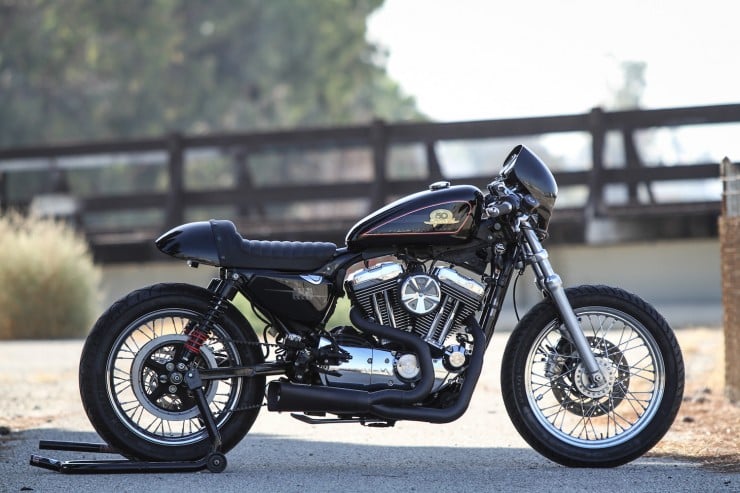 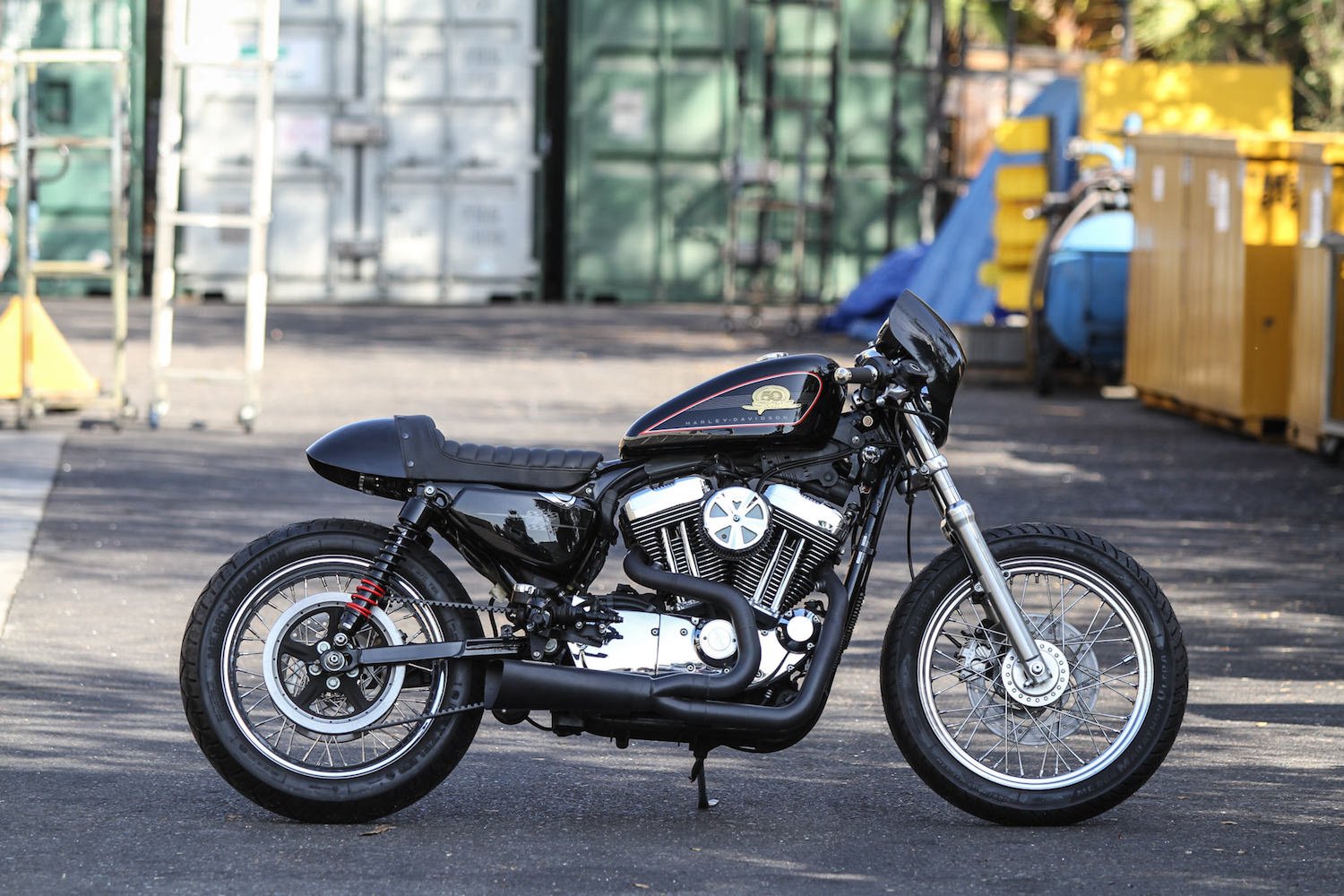