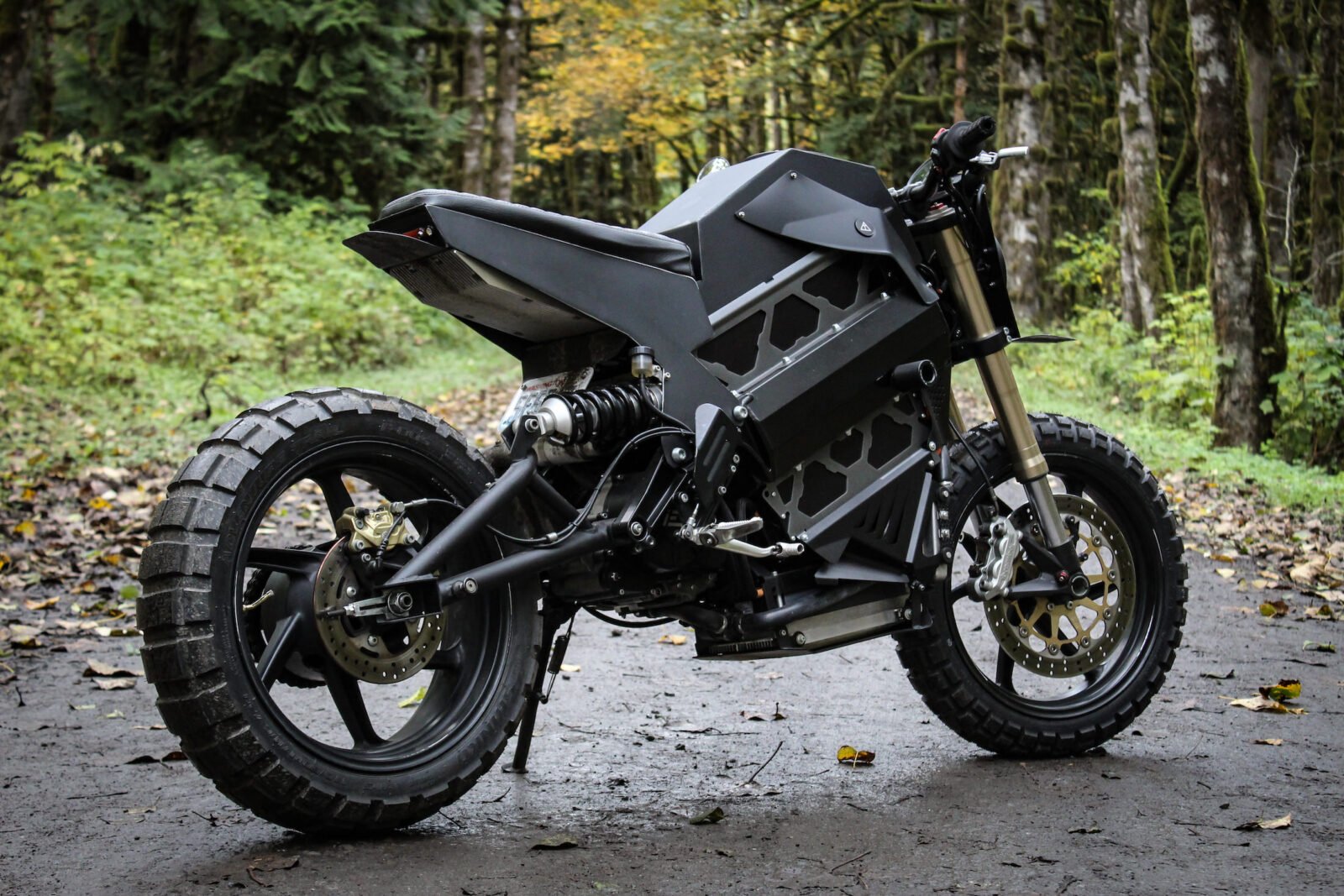 This electric scrambler by Droog Moto started life as a Brammo Empulse R, one of the most important electric production motorcycles of the modern age. Electric motorcycles make a lot of sense for off-road use, electric motors produce 100% of their torque from 0 rpm onwards and they produce very little sound – ideal for quiet natural environments.

The two person team at Droog Moto have made a name for themselves in recent years for turning out daily-rideable, post-apocalyptic custom motorcycles with a signature dark theme. Their builds have become so popular they’ve now begun producing limited series production custom motorcycles for clients around the world.

This is the first electric motorcycle from Droog Moto, there project began when a Brammo Empulse R owner approached the pair with his bike and asked them if they could modify it so it could be used for adventuring down forest trails and fire roads.

The project began with a careful inspection of the Empulse R and detailed research into the motorcycle, its engineering, and construction.

When Brammo released the model there were two main versions, the Empulse and the Empulse R. Both models have the same electric motor and battery pack, the primary difference between them is that the R-spec version has some carbon fibre parts as well as fully adjustable 43mm Marzocchi upside down forks and a fully adjustable Sachs rear monoshock.

Both Empluses use a liquid-cooled Parker GVM IPM AC synchronous electric motor capable of 40 kW or 54 bhp / 66 ft lbs. Unusually for an electric motorcycle the Brammo uses a wet clutch 6-speed manual transmission, this is to keep the electric motor in its optimal rev range.

The chassis is an E-Beam aluminium perimeter unit mated to a tubular steel subframe, and it has a tubular steel swingarm. As with all electric vehicles the battery pack is one of the heaviest and obviously most important components. The Empulse uses a 10.2 kWh Brammo Power™ BPM15/90 lithium ion pack mounted centrally where the engine would be in an internal combustion motorcycle. 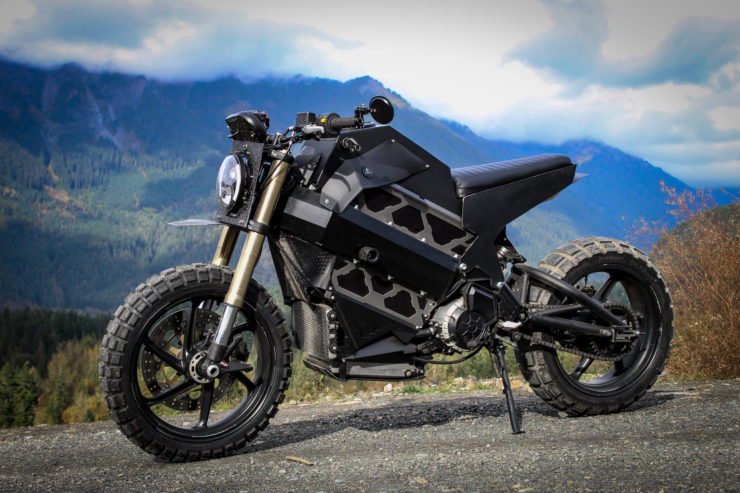 The top speed of the Brammo Empulse was listed as 110 mph and the battery pack was said to last approximately 100 miles (combined urban/highway). Brammo was purchased by Polaris Industries in 2015, just three years after the Empulse had launched, and they quickly released the Victory Empulse – a re-badged model that was otherwise largely identical.

It’s widely believed that Indian, a subsidiary of Polaris, has an electric motorcycle in the works at the moment based on Brammo technology.

The Electric Scrambler by Droog Moto

After researching the Empulse R and becoming familiar with it back to front, the team at Droog Moto sketched out a series of design upgrades to give the road-based motorcycle the ability to tackle simple off-road trails with ease.

The first order of business was a increased ground clearance so a custom lift was integrated into the swing arm. A hefty bash plate was installed under the battery pack, and custom steel fenders were fitted front and rear to deal with stones, mud, and debris. 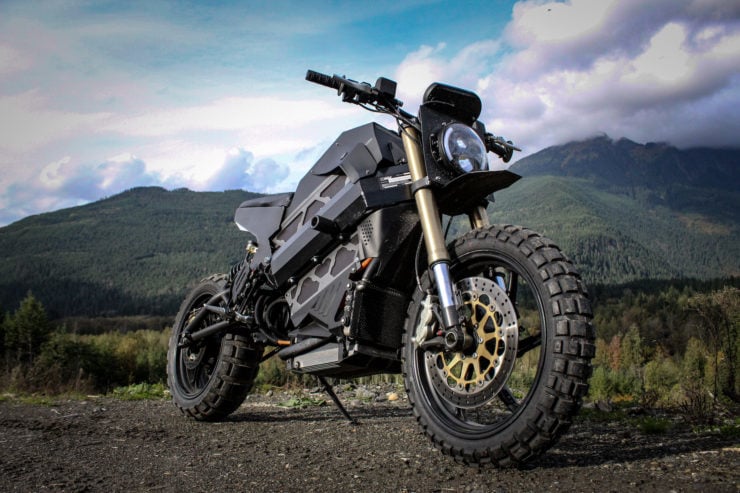 A new headlight plate was installed along with all new LED lighting front to back, the original handlebars were replaced with a Droog Moto 1 1/8 unit, fitted with a bar end mirror on the left side.

One of the most challenging aspects of the build was the new “fuel tank”, this isn’t really a fuel tank of course, but a cover that conceals the charging point and some of the electrical systems.

A new subframe was fabricated and fitted with a new seat, and side covers hide the electrical wiring from the outside world. A pair of chunky Continental TKC 80 tires were fitted front and back, giving the bike plenty of grip when the asphalt runs out. 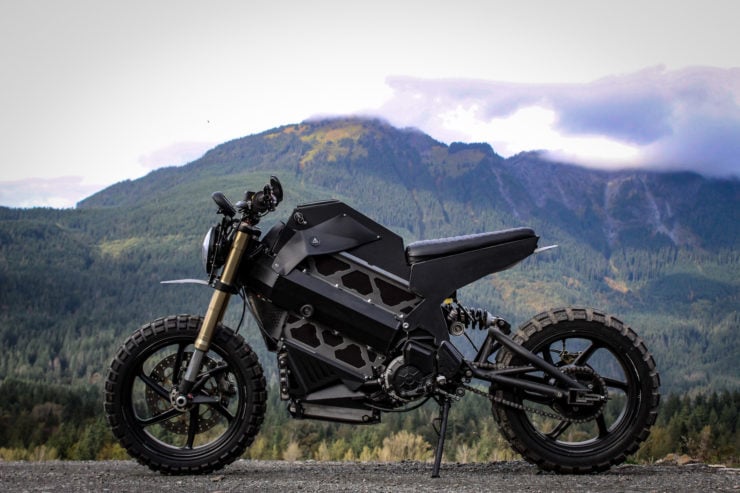 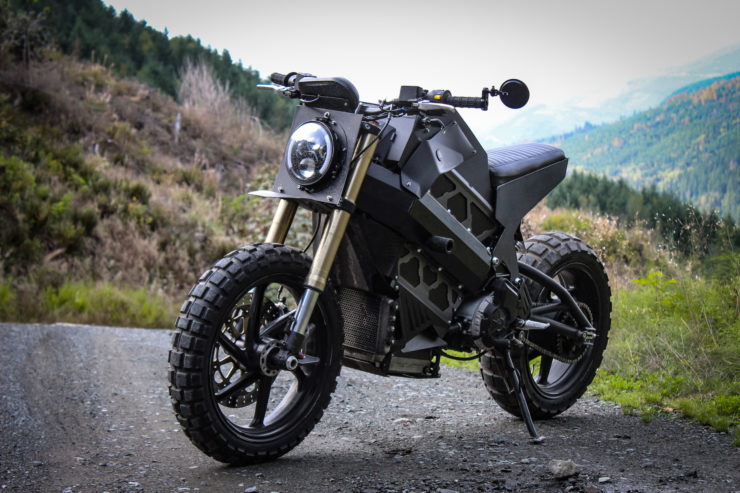 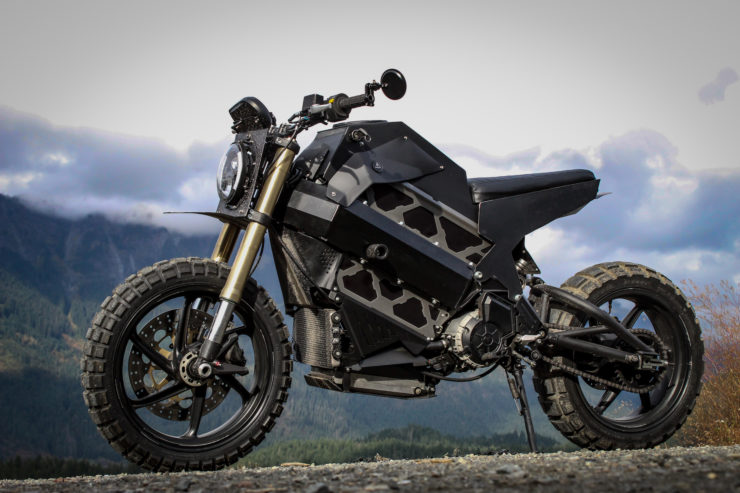 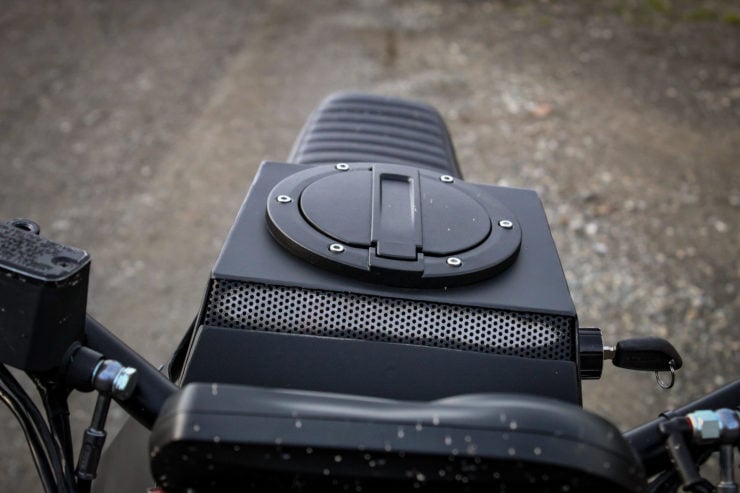 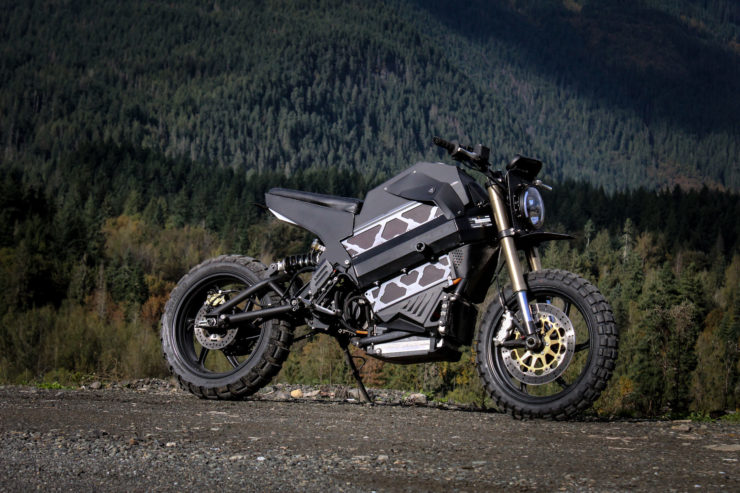 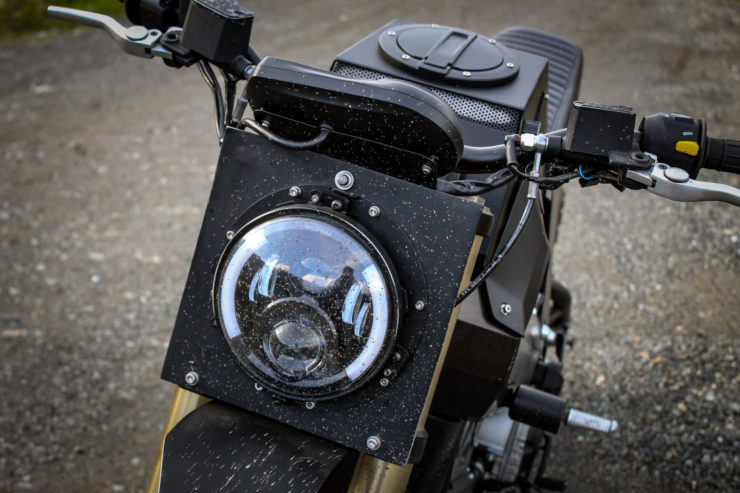 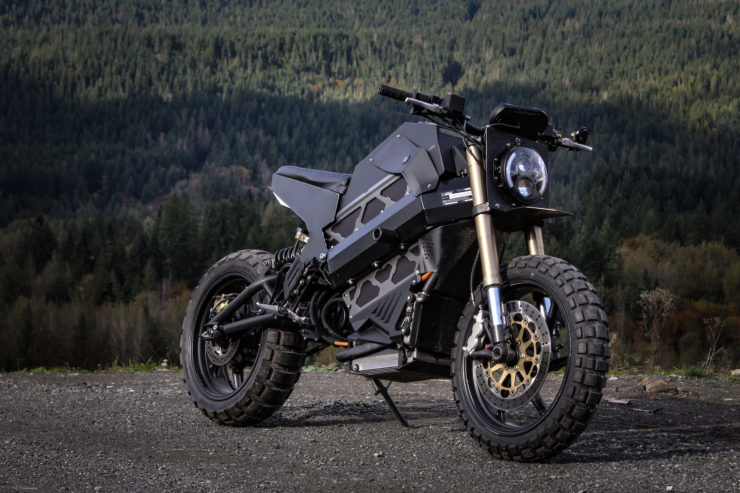 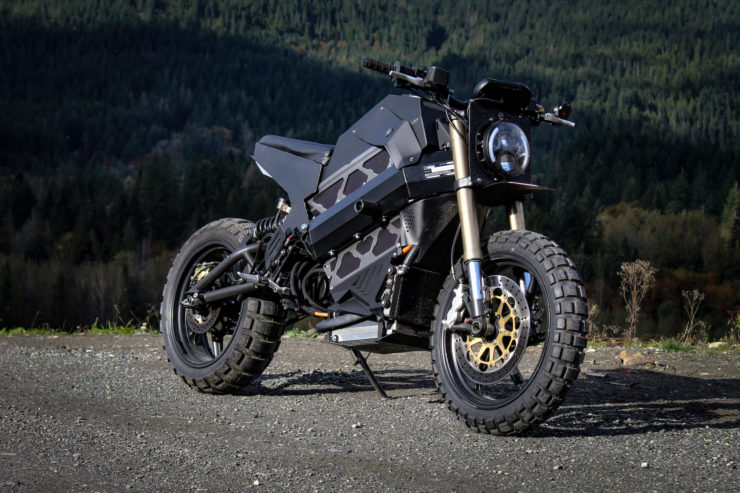 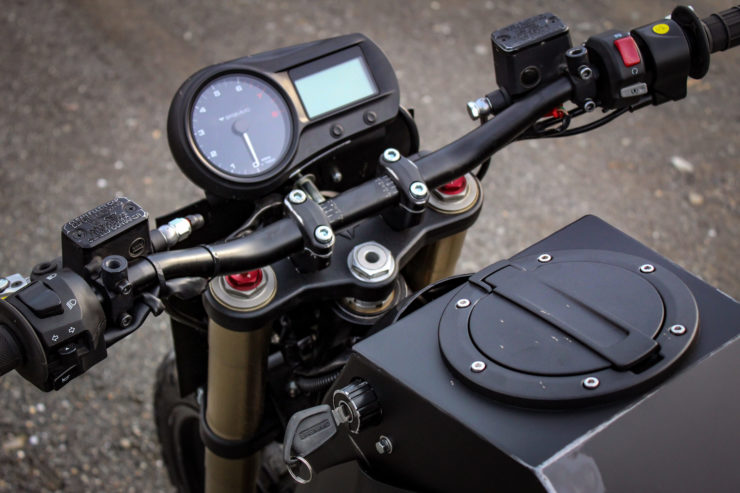 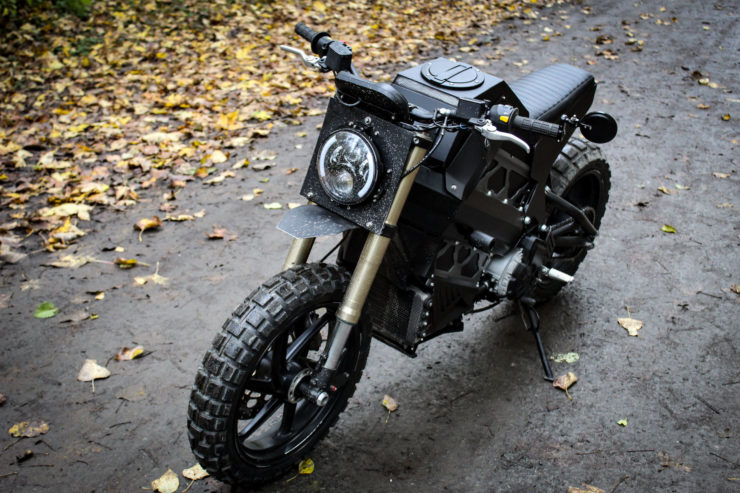 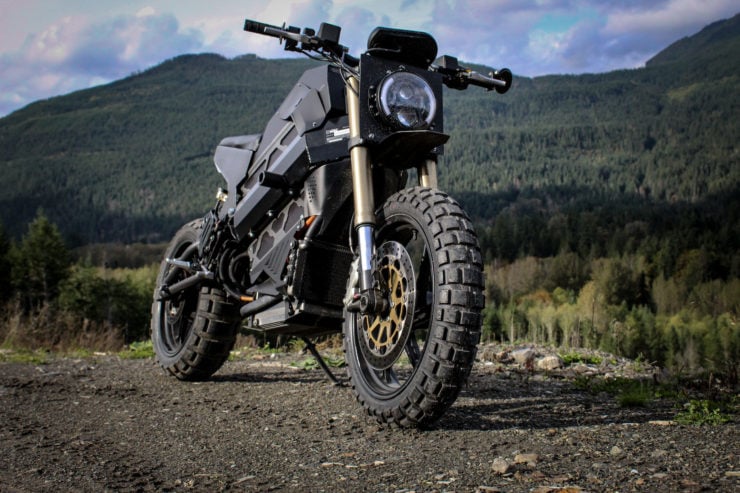 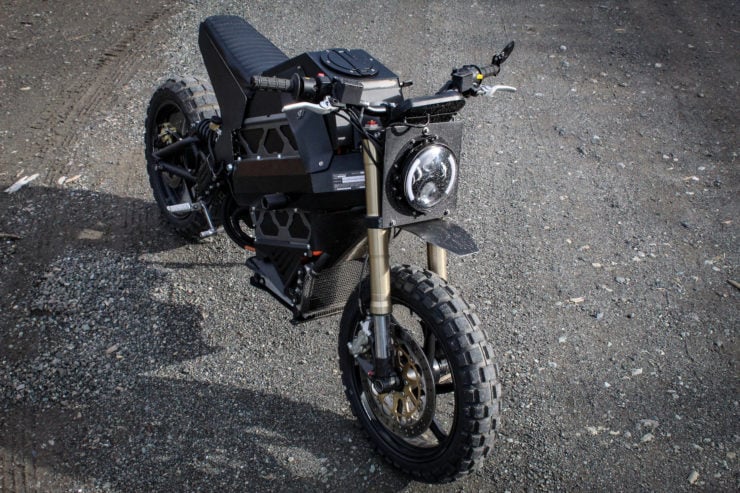 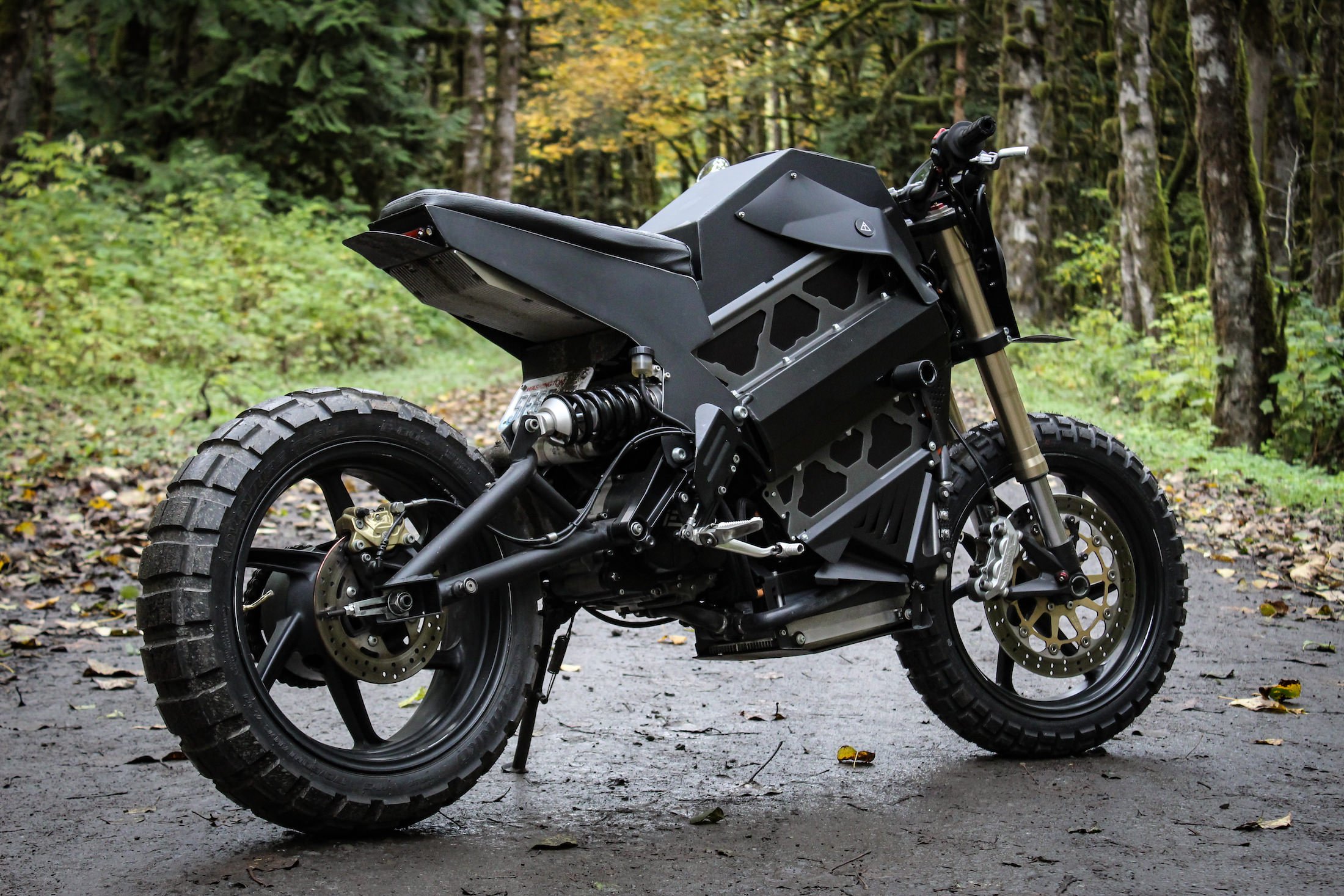