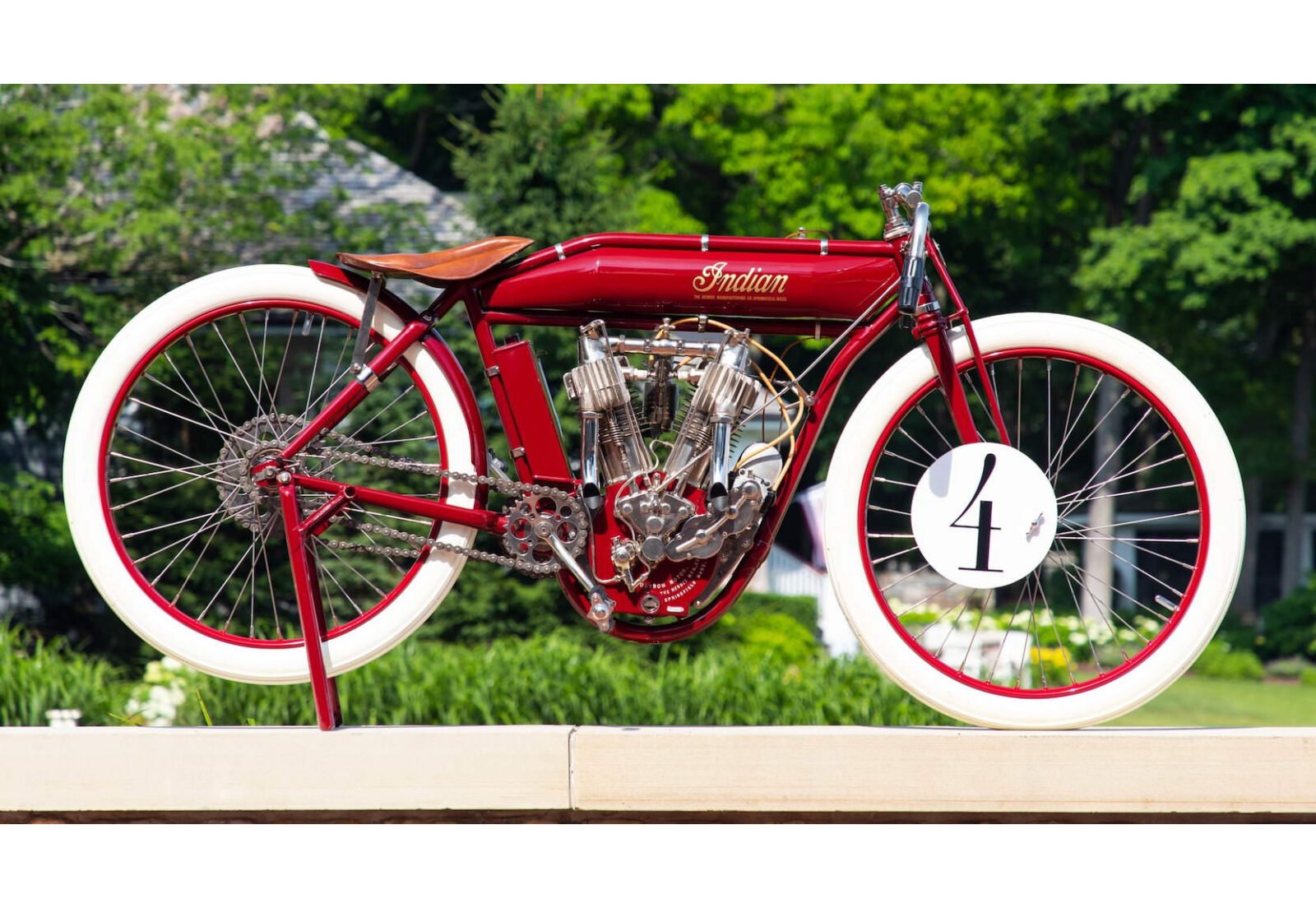 This 1912 Indian Board Track Racer is a pristine restoration by globally recognised expert Jim Prosper. Prosper is one of the finest restorers of Indian board track racers in the world, his restorations are considered some of the most authentic, factory-specification examples and they’re rebuilt using nearly all early factory parts that are painstaking sourced from across the USA and around the world.

Back near the start of the 20th century Indian was the largest motorcycle manufacturer in the world, they were also builders of some of the most successful racing motorcycles on earth, taking a 1-2-3 finish at the 1911 Isle of Man TT – the toughest motorcycle road race in the world.

This success in racing was no lucky break, company founders George Hendee and Oscar Hedstrom were both closely tied to the racing world starting with bicycle racing before the men joined forces and began building motorcycles. 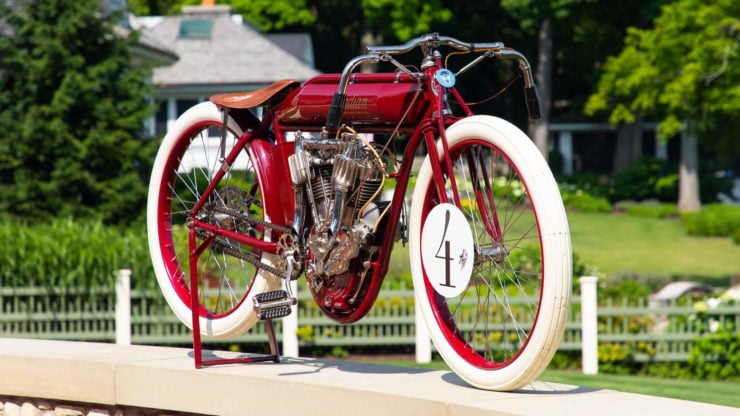 George Hendee started racing “big wheel” bicycles at the age of 16, he won the United States National Amateur High Wheel Championship in 1886 setting a new world record over the dirt track half mile in the process with a time of 2 minutes 27.4 seconds. Not long after this Hendee would become the first National Cycling Champion in American history, travelling around the country to compete and winning an astonishing 302 of the 309 races he entered.

Once he retired from competitive cycling Hendee started a business manufacturing safety bicycles, they were what we would now call modern bicycles with two wheels of the same size and a chain drive, prior to this big wheel/penny-farthing bicycles were more common.

Oscar Hedstrom immigrated to the USA as a child with his family, he first started out in the intricate world of watchmaking before designing and building his own gasoline engine for a two-seater bicycle that would be used for motor-paced bicycle racing. Hedstrom was a natural born engineer, and when his motorized creation was seen by Hendee at a bicycle race it changed the direction of both mens lives.

Hendee immediately recognised the engineering prowess of Hedstrom and before long the two men formed the Indian Motocycle Manufacturing Company in 1901 and began the process of designing what was essentially their own motorized bicycle for public sale. The first model in 1902 was a simple four-stroke, single-cylinder engine mounted into a frame simple single-tube frame. 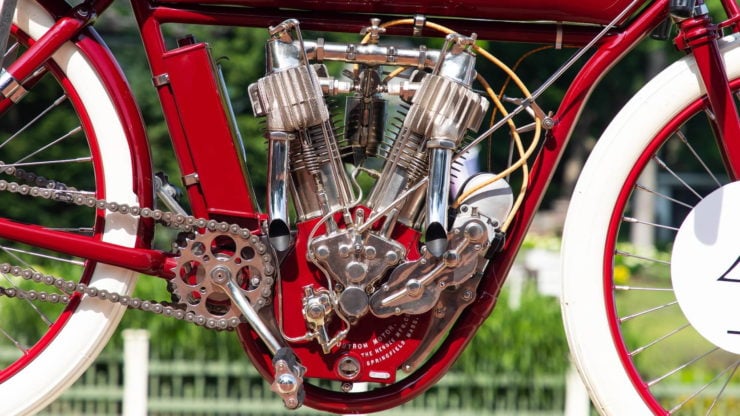 Over the next few years development would be remarkably rapid, and by 1905 the company had their first operational V-twin offering significantly more power and speed. It would be these V-twins that would form the backbone of Indian’s racing efforts, and the biggest races of the era happened on stadium sized board track oval circuits with banked turns at each end. These board tracks could measure up to a mile in lap length, and racers would achieve speeds of well over 100 mph for sustained periods – all with no brakes and no helmets.

Indian competed with the likes of Harley-Davidson, Cyclone, Flying Merkel, and many other now defunct marques on board tracks from coast to coast across the United States attracting audiences of tens of thousands at each race.

The 1912 Indian Twin Board Track Racer you see here is an original 61 cubic inch model built by the factory for racing. It’s fitted with a Hedstrom Improved Carburettor and a Bosch magneto, and the engine is an inlet-over-exhaust, air-cooled, F-head V-twin.

The quality of the restoration by Jim Prosper speaks for itself through the images, and the bike has already won the AMCA Junior 1st (at the Yankee Chapter meet) and an AMCA Senior award for its excellent attention to correct period details.

Mecum are estimating that it’ll sell for between $100,000 and $175,000 USD but it’s being offered with no reserve, if you’d like to read more about it or register to bid you can click here to visit the listing. 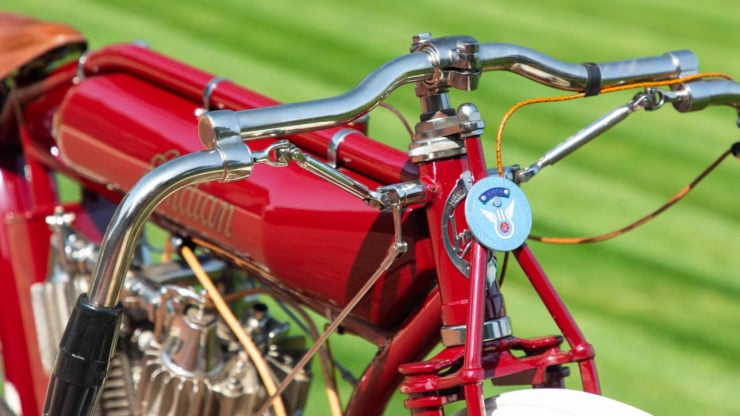 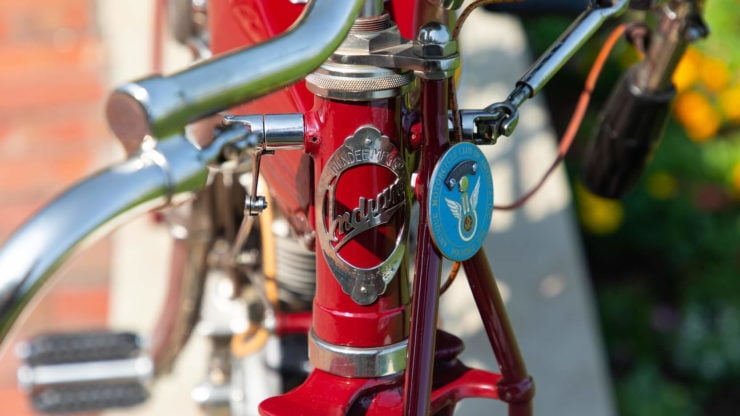 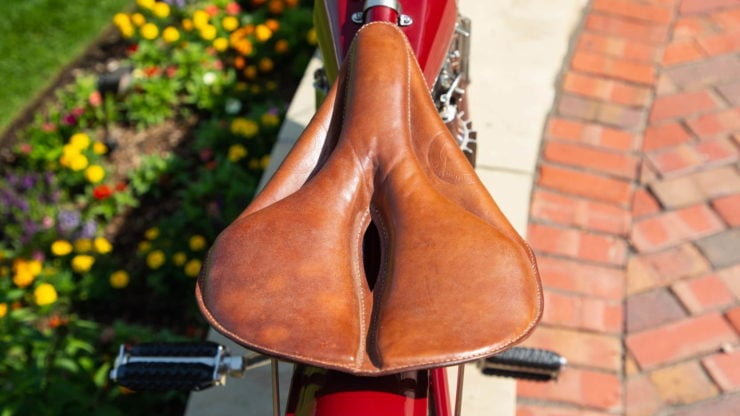 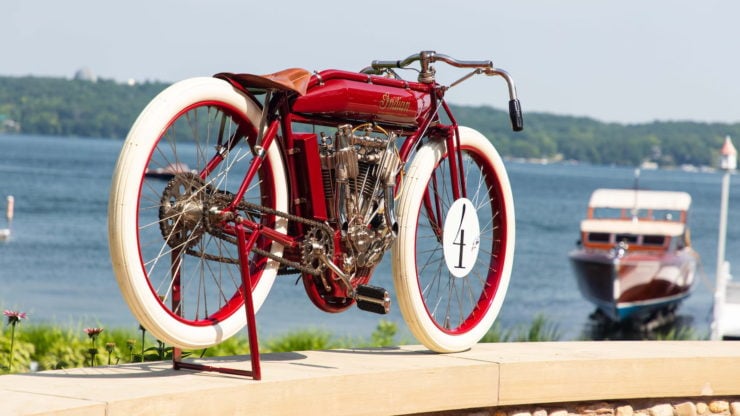 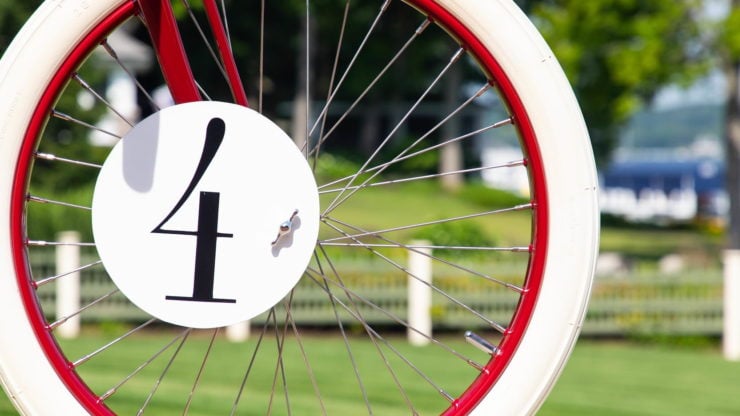 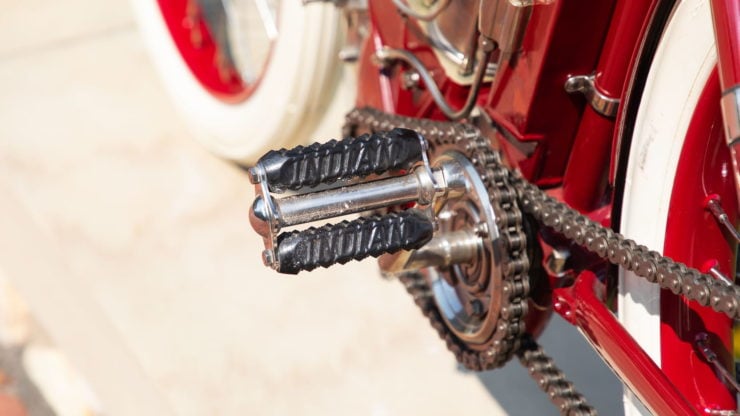 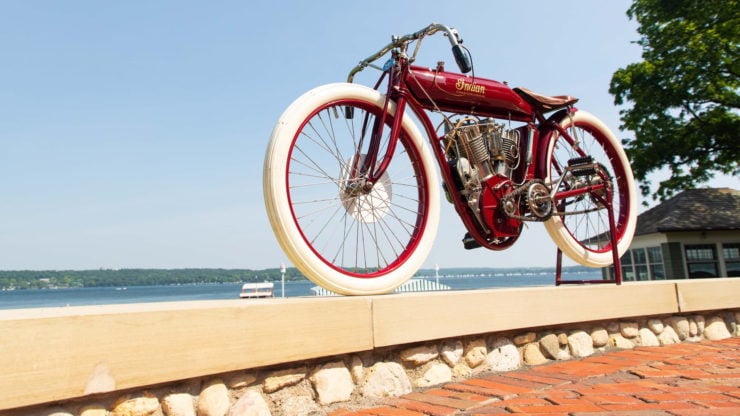 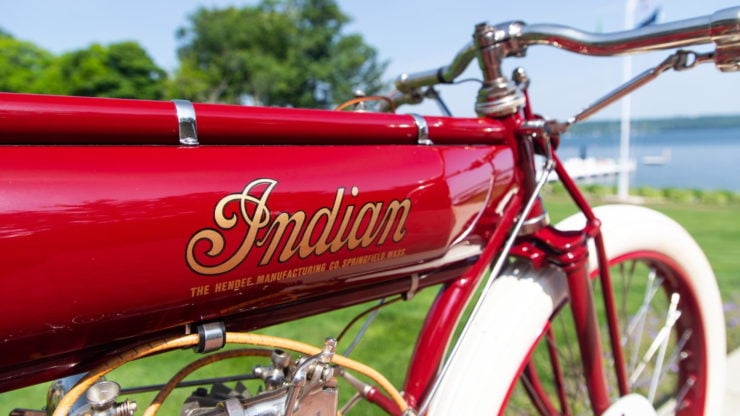 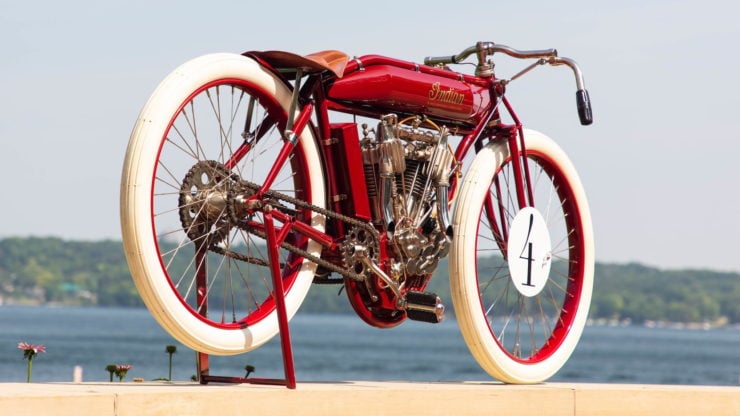 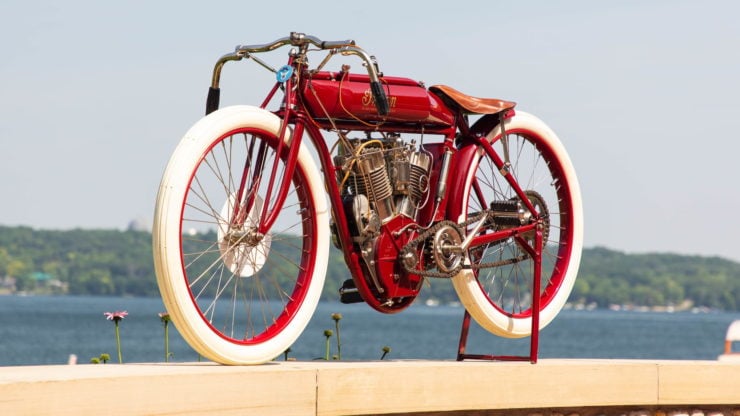 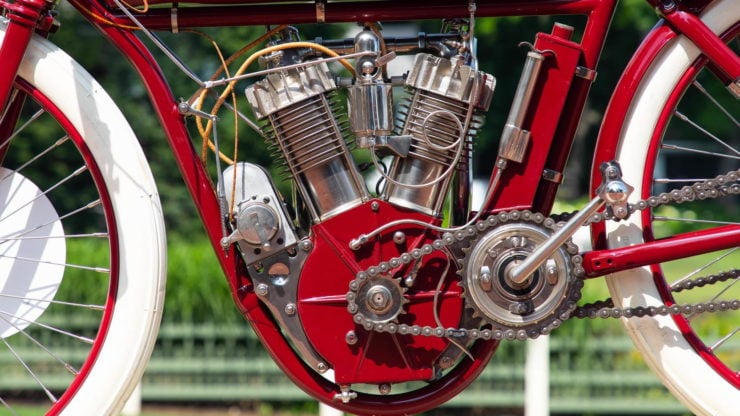 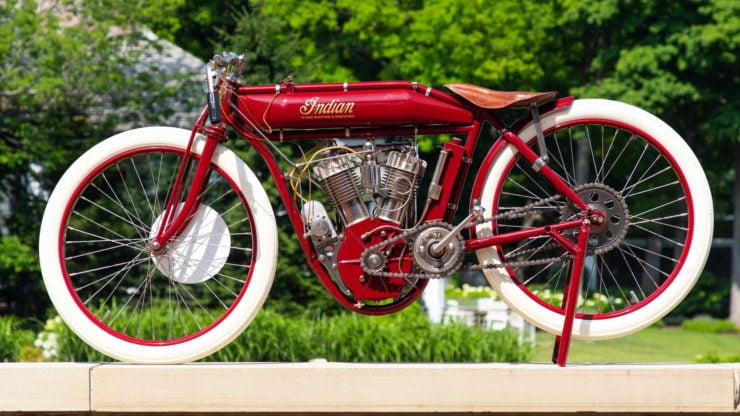 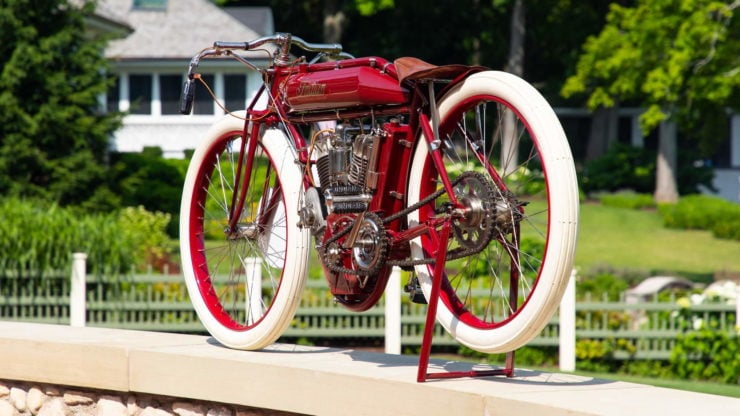 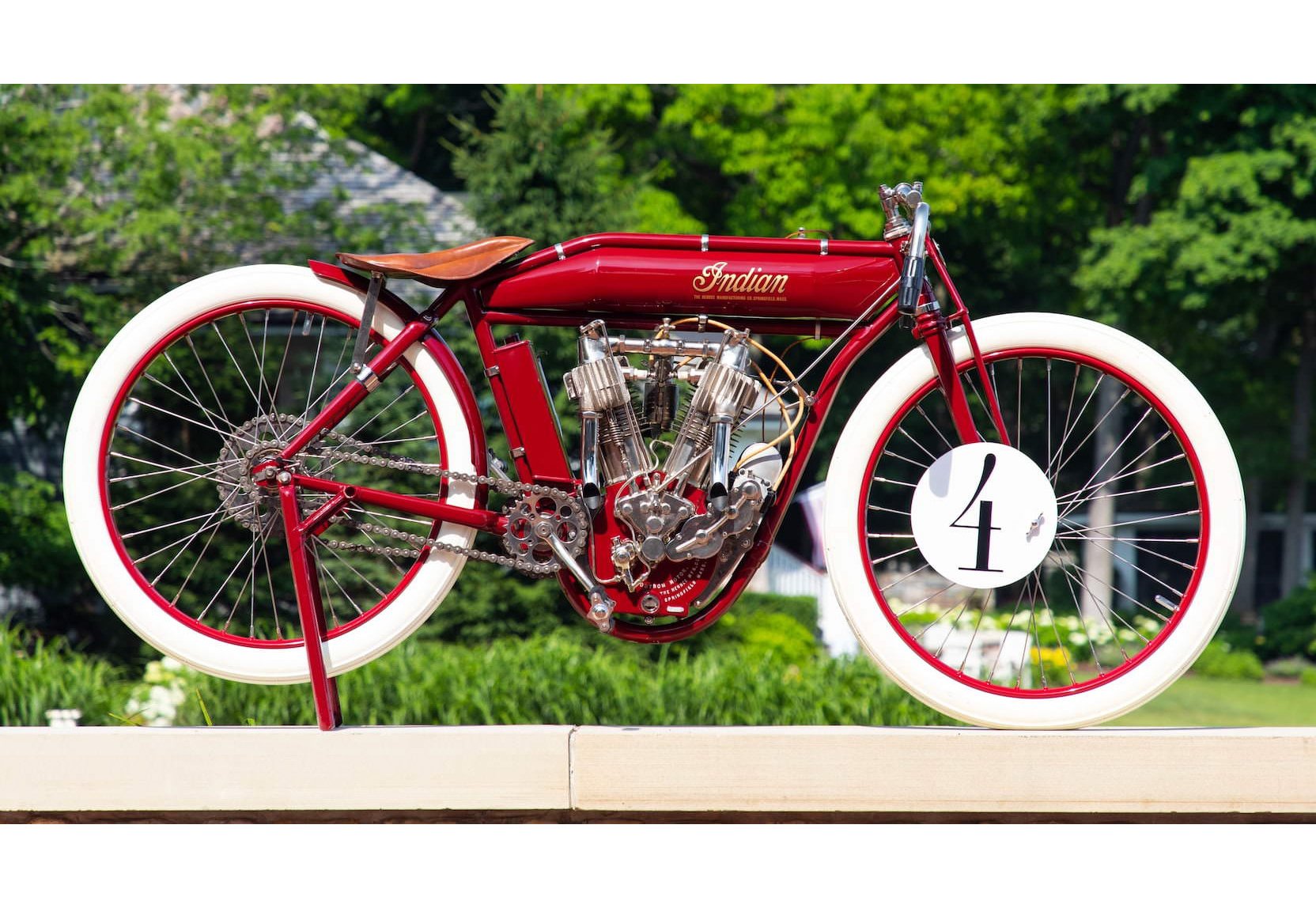