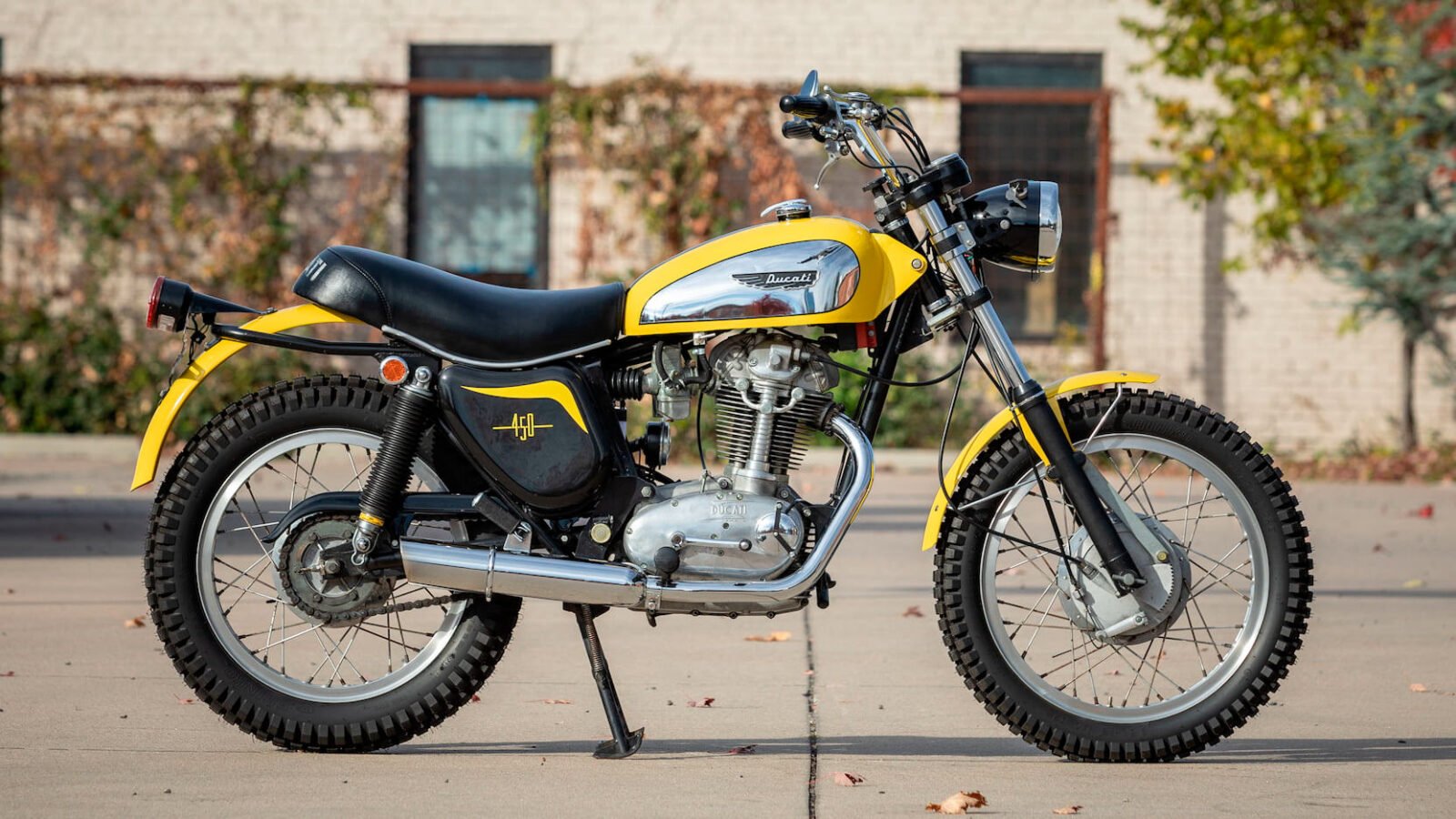 This is a rare 1974 Ducati Scrambler 450, it’s the primary forefather of the popular line of modern Ducati Scramblers who have all taken much of their design inspiration from the first Scramblers made by the Italian company back in the 1960s and 1970s.

Ducati’s first line of Scramblers proved popular with their American owners, they were lightweight motorcyles with beautifully engineered motors that spun up to over 6,500 rpm thanks to their bevel gear driven overhead cam.

Interestingly the entire Ducati Scrambler model series then and now owe their existence to Joseph and Michael Berliner, two brothers who were Hungarian Jewish refugees from the Holocaust. 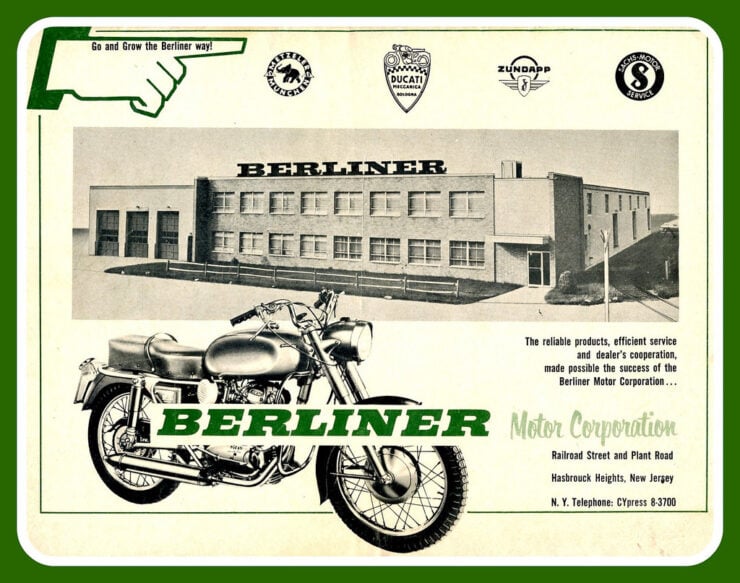 This is an original ad for the Berliner Motor Corporation, a motorcycle importer than became one of the most influential forces in the world for European marques who wanted to sell their bikes in the USA.

They established the Berliner Motor Corporation in the United States and became one of the most influential forces in the development of new motorcycles in Europe for the North American market.

The Joseph and Michael survived the war thanks to their mechanical acumen, the Nazis used them as truck mechanics which was the only reason they were able to avoid the concentration camps.

After the war they opted to move to the United States where Joseph established a company distributing and repairing Zündapp motorcycles. Over time they would add a number of other European manufacturers including Ducati, Matchless, Moto Guzzi, Norton, and Sachs.

The Creation Of The Ducati Scramblers

The Berliner brothers became the motorcycle equivalent of Max Hoffman, they would recommend new models that should be made to European manufacturers (sometimes forcefully), and as a result they had a major impact on the American motorcycle landscape of the 1960s and 1970s. 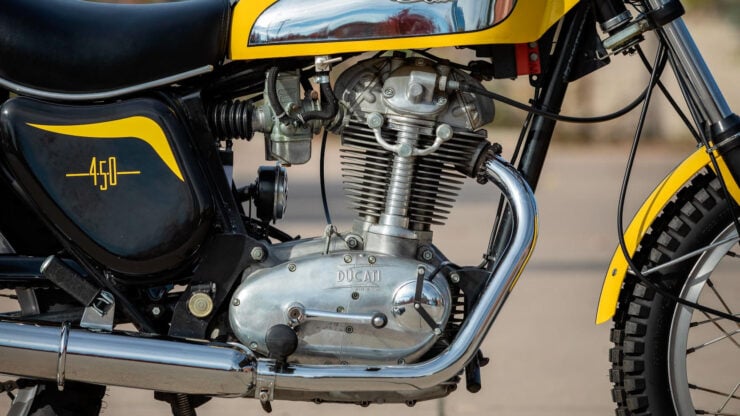 The 450 Scrambler engine is a single-cylinder 436cc four-stroke motor with a bevel gear driven overhead camshaft operating two-valves. It produces 27 bhp at 6,500 rpm.

They would be directly or indirectly responsible for the creation of not just the Ducati Scramblers, but also of the Moto Guzzi V7, Moto Guzzi Eldorado, Norton Atlas, Ducati Apollo, Norton P11, Norton Scrambler, Moto Guzzi Le Mans, and many others.

It was Joseph Berliner who convinced Ducati to build their first Scrambler, taking many parts from their street motorcycle range and incorporating some changes developed by Michael Berliner for a 250cc Ducati flat tracker he had built.

The most successful scramblers at the time were built by British marques like Triumph, Matchless, and BSA and most of these motorcyles had a minimum capacity of 500cc up to 650cc+.

The Berliners targeted the first 250cc Ducati Scramblers at the other end of the market – people who wanted something fun and lightweight but not overwhelmingly powerful.

In 1969 Ducati would unveil their largest and most powerful Scrambler yet – the 450. 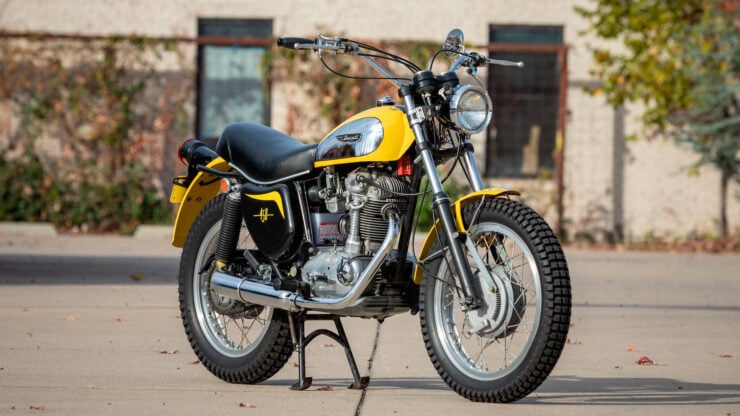 Ducati’s Scramblers were designed to be lightweight, easy to ride for beginners on the street or on the dirt, and distinctive looking – with the bright paintwork and chrome-sided fuel tanks.

The motorcycle’s frame is a relatively standard duplex tubular steel cradle chassis, and it has  telescopic forks up front with dual shock absorbers in the rear, and drum brakes front and back.

Ducati used bright colors on their Scramblers with polished chrome sides on the fuel tank giving them a distinctive look not entirely different to the Husqvarnas of the same era.

1974 would be the final year of production for the 450 Scrambler, after which it would be 40 years until Ducati unveiled an all new line of Scramblers.

The 1974 Ducati Scrambler you see here looks to be in excellent original condition throughout, right down to the tires. The listing is a little light on information but if you’d like to see it or register to bid you can click here to visit the listing. 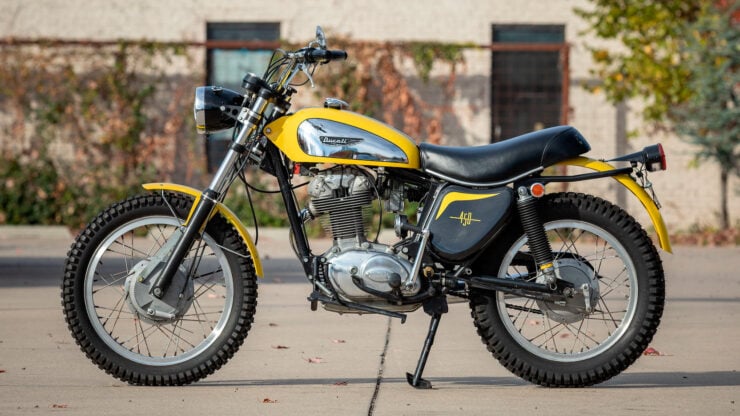 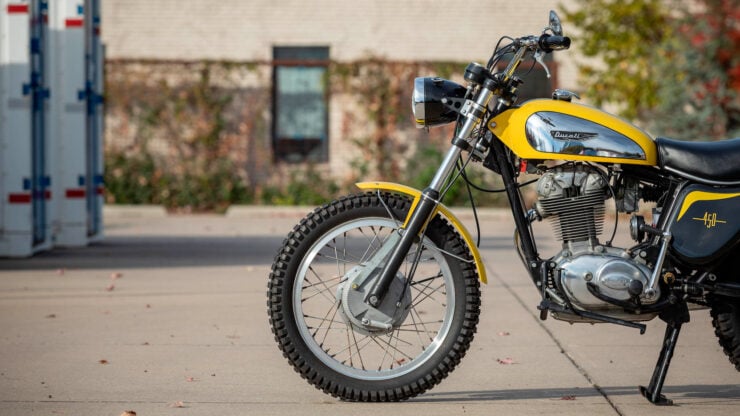 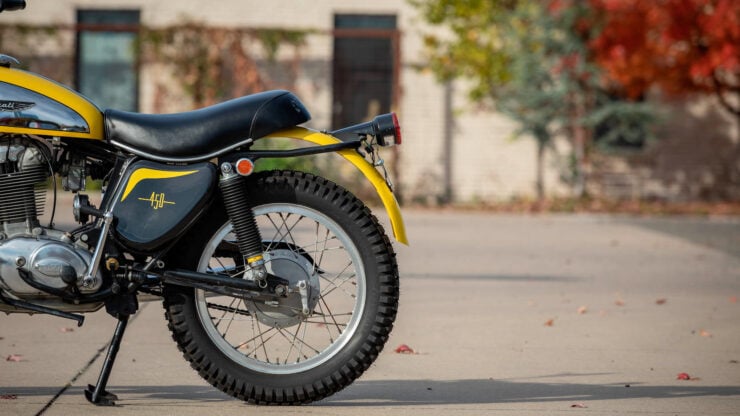 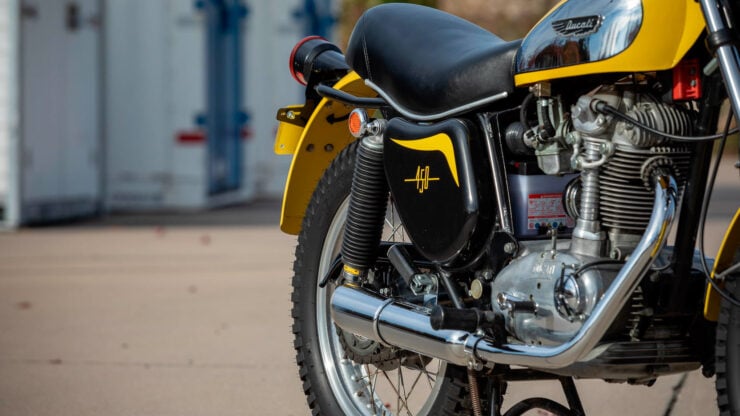 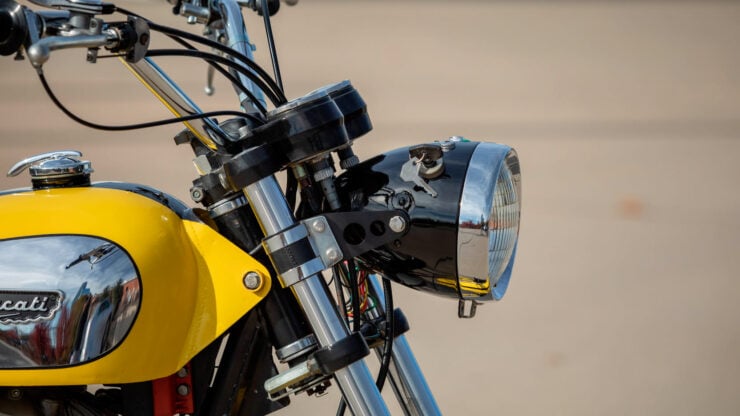 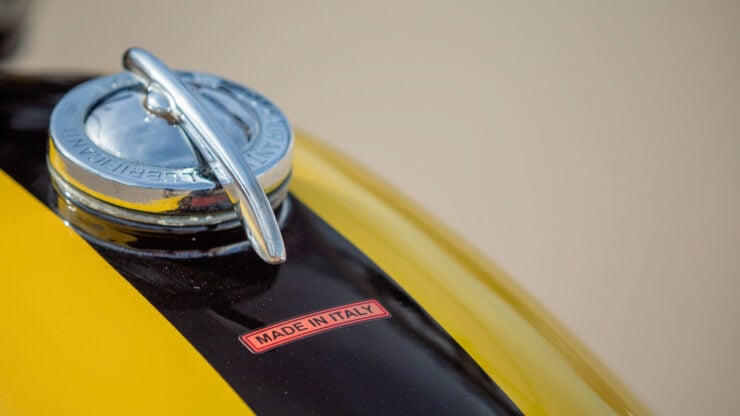 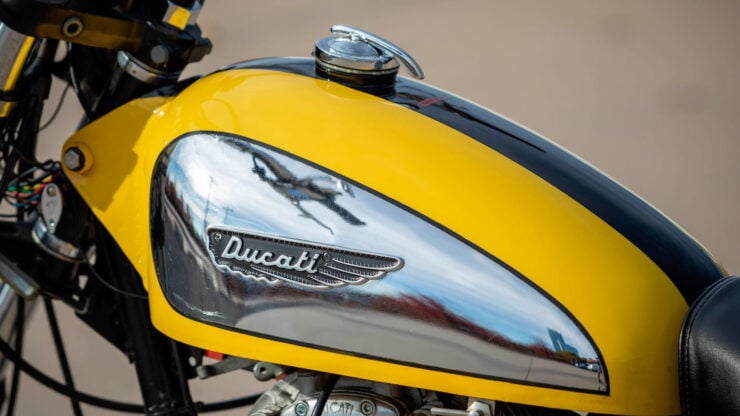 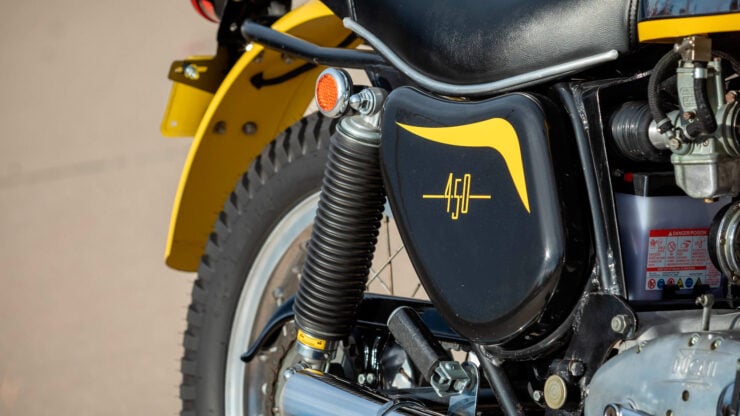 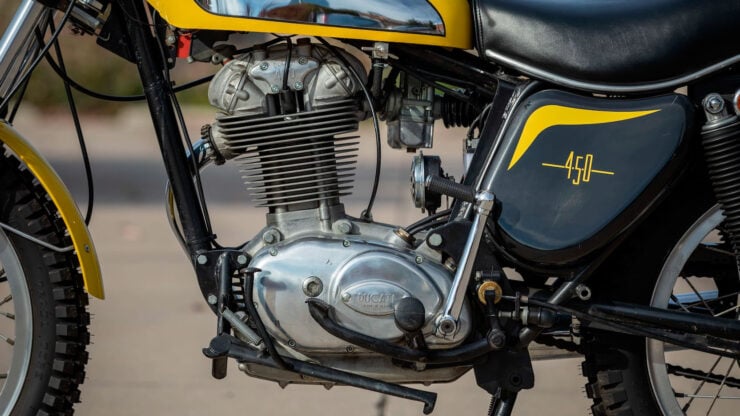 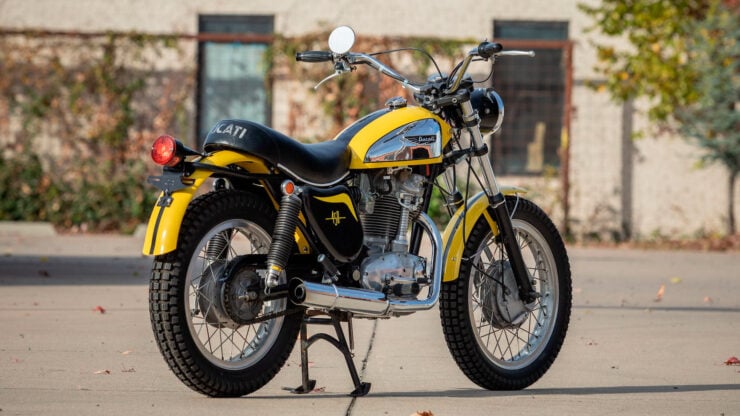 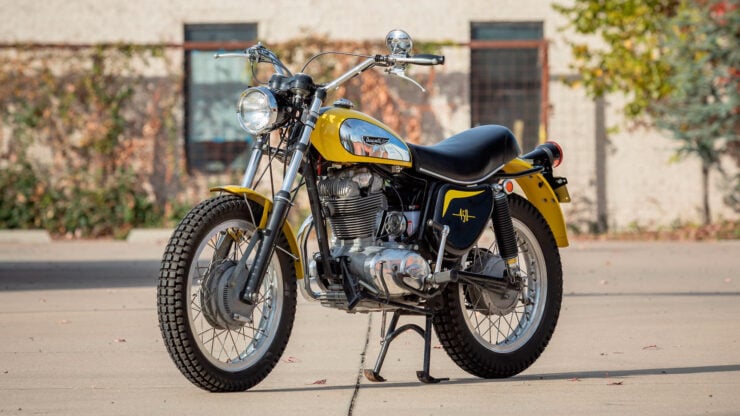 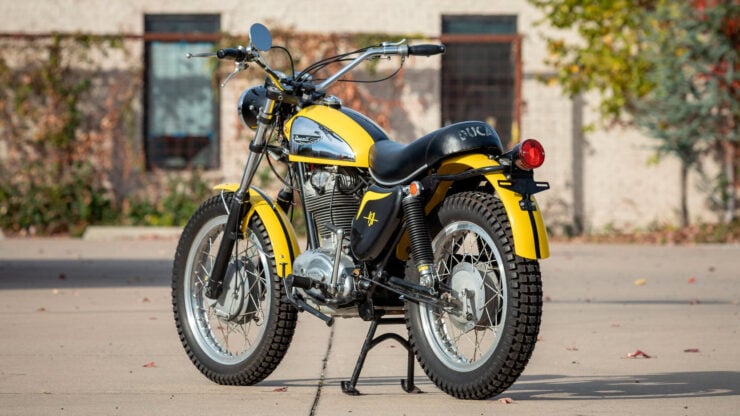