A Brief History of the Ducati Scrambler 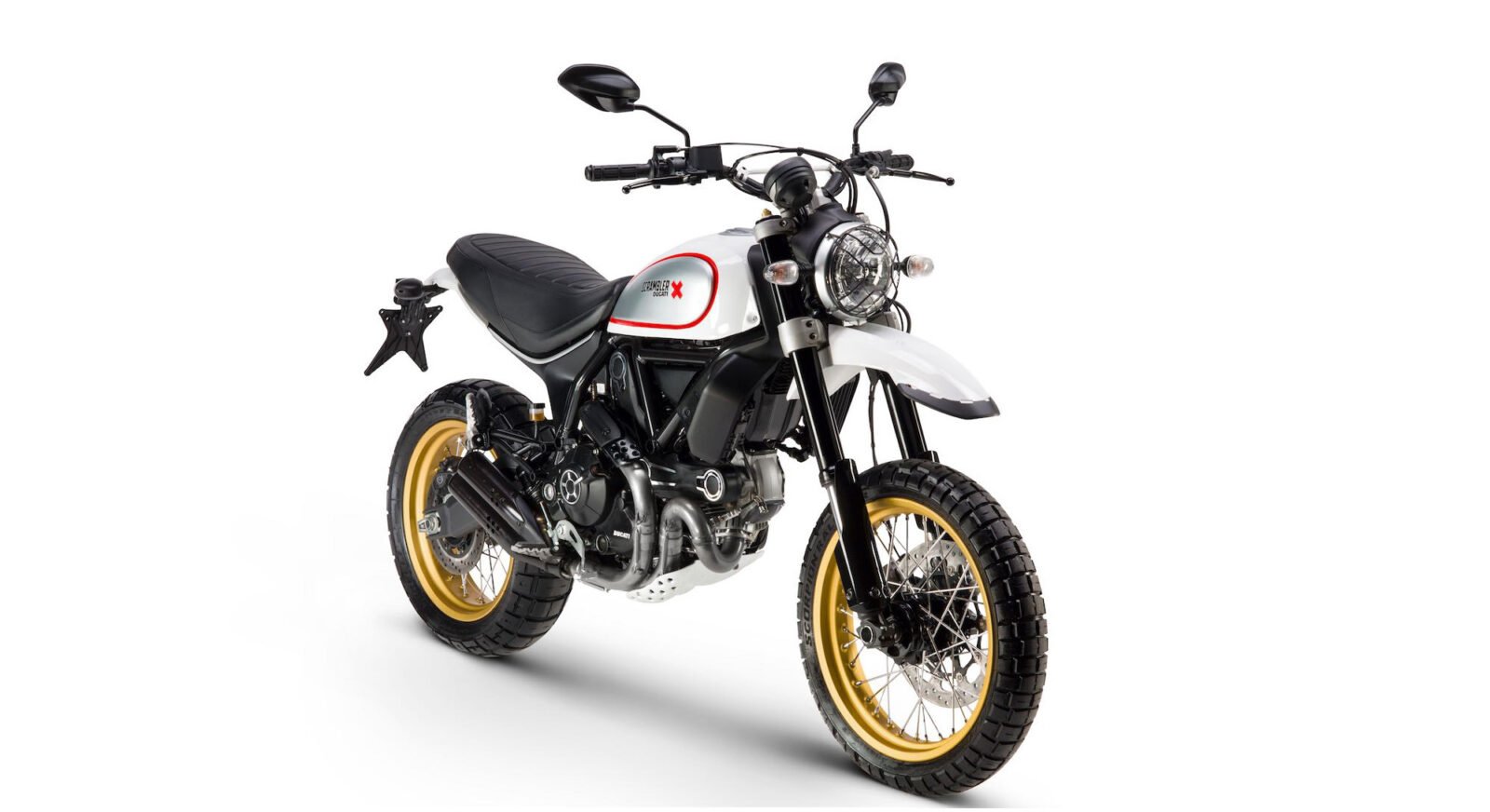 The Ducati Scrambler is set to be just as revolutionary as the Ducati Monster was in the 1990s – this is a brief introduction to the still quite new model.

The Ducati Scrambler is a relatively new design from Ducati designed to appeal to the market for practical, retro-styled motorcycles with modern performance and reliability. Ducati’s brand has long been associated with high performance sports motorcycles and they’ve been working in recent years to expand out into more genres with quite some success.

The Ducati Scrambler models are not intended as all-out off-road motorcycles but instead as bikes that are capable of exploring forest trails, urban backstreets, and the occasional jaunt down a highway. One model, the Desert Sled, is specifically for those who are looking for more off-road capability. Ducati’s marketing for these bikes has focused on providing quite a comprehensive range of not only models of the new Scrambler but also accessories with which to customize your bike and a veritable plethora of other related merchandise.

It would seem likely that the Ducati Scrambler is not only being offered as a motorcycle model in its own right but that it is also serving as a market research project to enable Ducati to tailor their product line to what people are looking for in a motorcycle. So, just as a Harley-Davidson offers not just a motorcycle but also something we see as a lifestyle, Ducati is attempting to do the same thing but with a different concept range of bikes.

The new Ducati Scrambler is not a development of the original 1962-1976 Ducati that first bore that name. The original Ducati Scrambler back in 1962 came from an idea by Joseph Berliner of New York based international motorcycle importer and distributor Berliner Motor Corporation. Joseph Berliner was a survivor of the Auschwitz concentration camp who migrated to the United States after the war and with his brother Michael set up a successful business.

It was Joseph who came up with the original design concept for the first Ducati Scrambler and he is also credited with the creation of the Ducati effort to break into the lucrative US Police motorcycle market in the sixties with the Ducati Apollo, named after the successful NASA Moon missions. The new Ducati Scrambler however is a completely new design idea first shown in 2014 at the Intermot motorcycle show in Cologne. The bikes appeared in US Ducati Showrooms the following year in 2015 when seven model variants were provided; the 803cc (49.0 cu.in.) Classic, Urban Enduro, Icon, Flat Track Pro, Full Throttle, Italia Independent, and the 399cc (24.3cu.in.) Sixty2. 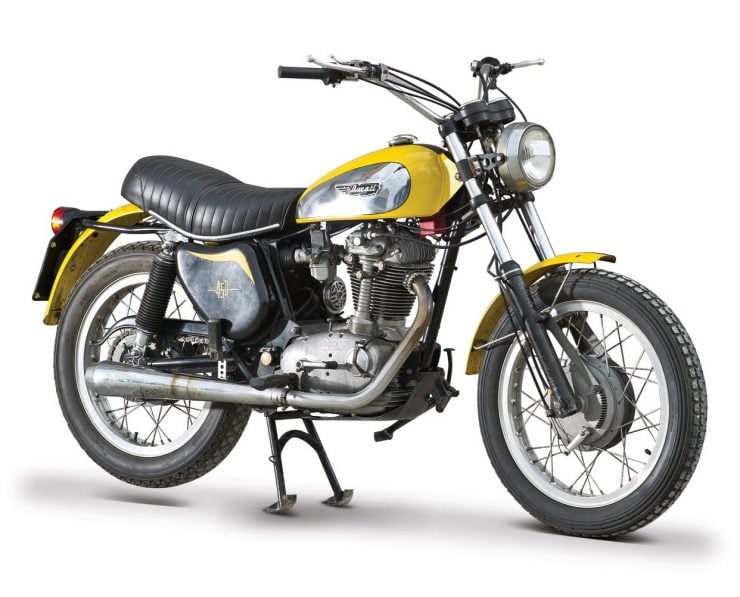 For 2017 the Ducati Scrambler group of motorcycle models comprises two groups of models one fitted with the 803cc L-twin engine and the other with the 399cc L-twin engine. 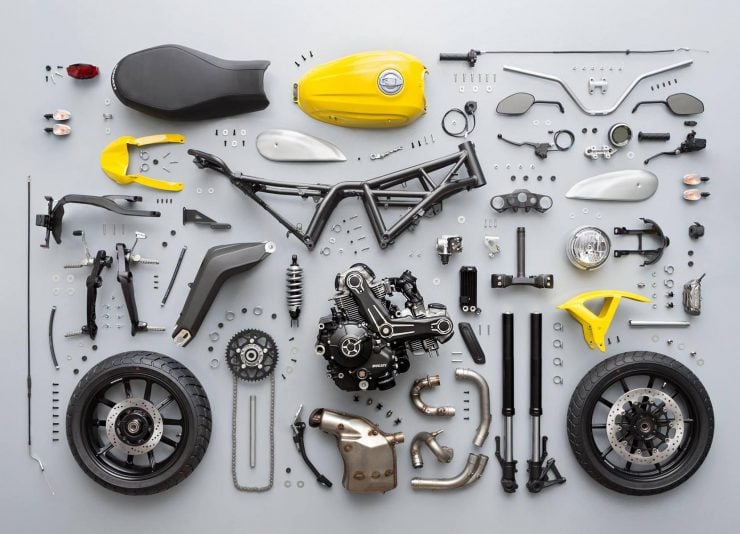 The Desert Sled is described as “an enduro version inspired by the world of off-road motorcycles that made history in the United States during the 60s and 70s.” which leans on the period Steve McQueen was participating in desert racing. This bike is fitted with a ribbed seat suitable for dirt track and desert riding, a reinforced tubular frame, aluminum handlebar with cross strut, high front and rear mudguards, stainless steel muffler with aluminum tail pipes, an engine protection plate, spoked gold wheels (19” front and 17” rear), an aluminum double sided rear swing arm, and is fitted with Pirelli Scorpion Rally STR tires as befits its off-road/on road capability. 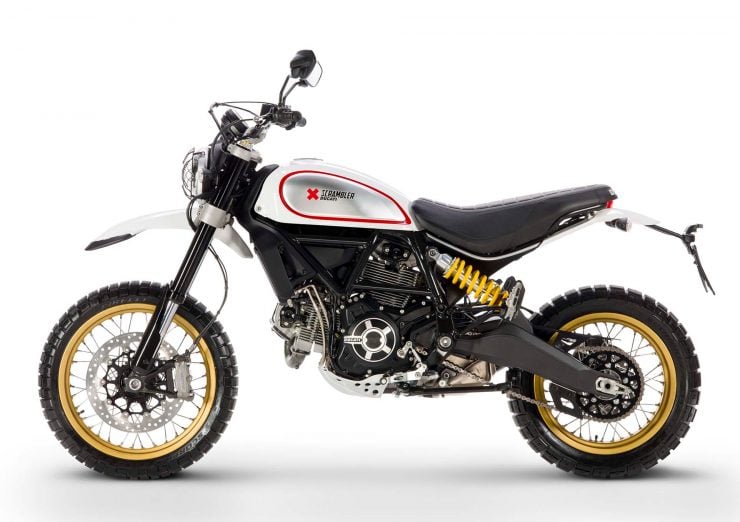 The Café Racer model features the “de rigeur” clip on handlebars, aluminum gold colored 17” front and rear wheels fitted with Pirelli Diablo Rosso II tires, a small fairing around the front headlight, a monoposto “café racer” seat, handlebar mounted rear view mirrors and a “racing number” decoration on each side. The rear number plate is mounted on an arm that extends out over the rear wheel that includes a vestigial mudguard. This model should be regarded as a road bike only. 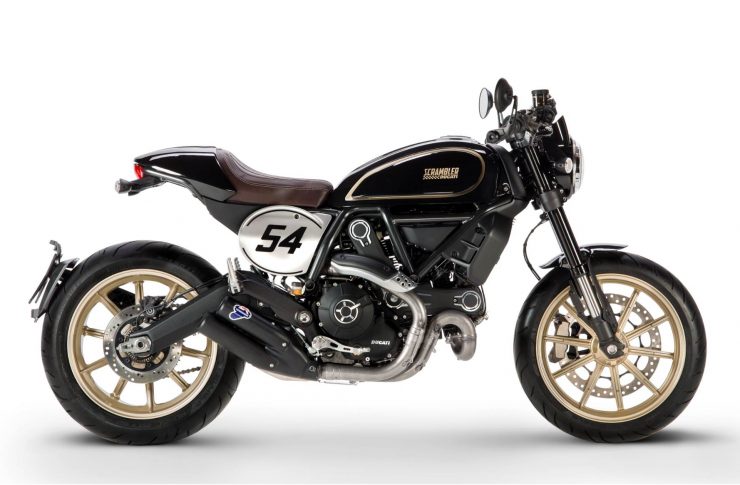 The Icon is the basic featured model and will appeal to those looking for a no-nonsense fun road and dirt track bike. It has two seat capacity with a pillion passenger grab rail under the rear seat and also an under seat mounted USB connection. The single rear Kayaba shock absorber has pre-load regulation. 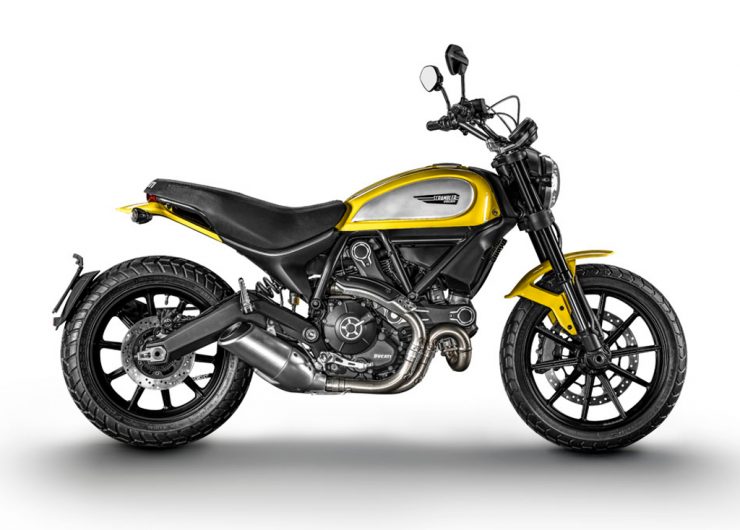 The Classic has an upright seating position and spoked wheels (18” front and 17” rear) fitted with Pirelli “dual sport” tires. The seat is described as “vintage” style and the 13.5 liter “teardrop” fuel tank has aluminum interchangeable side panels which can be removed and replaced with a pattern of your choice from the Ducati range of accessories. This bike has front and rear mudguards and is described by Ducati as being “70’s style”. 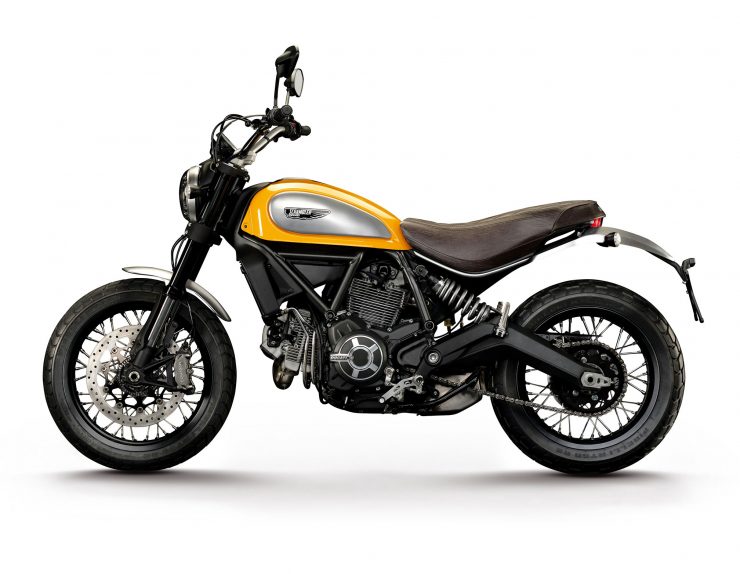 The Full Throttle is said to be inspired by the flat track racers of old with a “racing inspired” monoposto seat, short front mudguard and vestigial rear mudguard/license plate holder. The handlebars are wide and somewhat lower than on the Classic. Like the Classic this bike has the single rear Kayaba shock absorber with pre-load regulation and under seat USB. 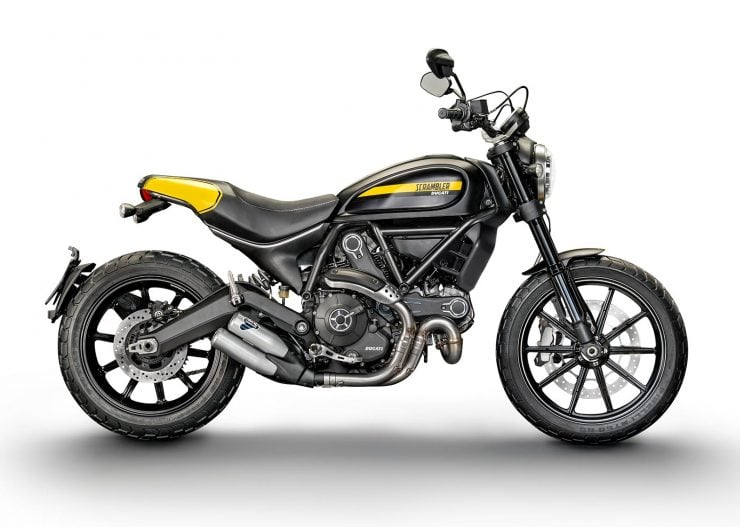 This is Ducati’s most popular Scrambler model. This bike has a wide and high handlebar and the usual Kayaba pre-load adjustable single rear shock absorber with conventional mudguards front and rear. Seat height is kept to 790mm. It’s aimed at new riders and those who prefer lighter, less powerful bikes. 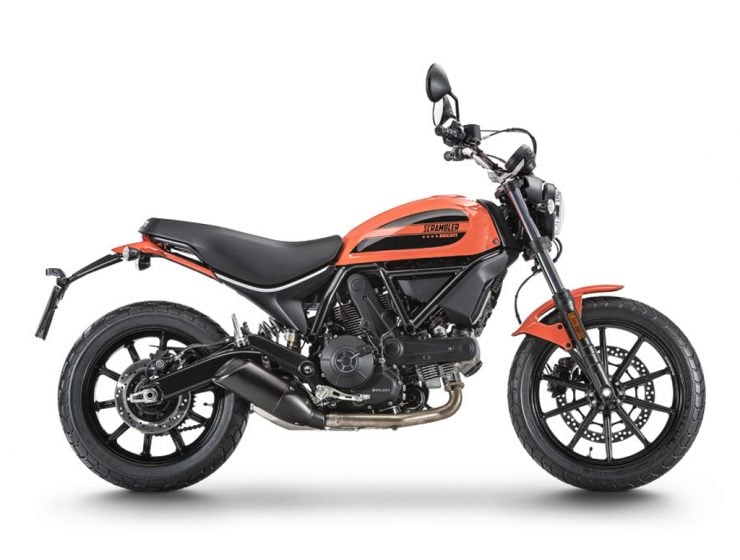 Rider reviews of the new Ducati Scrambler models have almost all been positive. These bikes make no pretenses about being the biggest, baddest, meanest machines on the tarmac or off it. Quite the reverse, reviewers describe the riding experience as being just plain fun and predictable without being boring. Can you do a wheel-stand with the 803cc models? Absolutely. There has been some negativity on social media particularly from Ducati purists. However, Ducati is in the motorcycle business to sell motorbikes and to make money in the process. Part of the secret to accomplishing that is to get more people on Ducati motorcycles and to make sure they keep coming back and buying more nice new Ducati motorcycles. One commentator correctly observes “The Scrambler is way to get butts on seats.” And for those who want Ducati to make big, bad speed machines rumor has it they are currently working on a 1,200cc Ducati Scrambler.

The Ducati Scrambler has a great heritage, i.e. it has a pure bred Italian Ducati heritage and the 803cc L-twin engine comes out of the much loved Ducati Monster 796. The Italians can’t help themselves but make motorcycles and automobiles that are eye catching and fun, they even managed that with the diminutive Fiat 500 “Bambina” and that Italian stylishness is very much present in the various models of the Scrambler. It has excellent and predictable handling and is capable of striking the right balance of excitement yet with control. It just needs the rider to play his or her part. In a sense the Ducati Scrambler models represent a departure for Ducati from the powerful, technical and road racer fast machines of recent years that only a segment of the market will buy, to creating a bike that is far more like Joseph Berliner’s original design idea for a modest sized, approachable and fun motorcycle.

The Ducati fun bike is back and despite the marketing hype it is actually a really nice motorcycle that is the sort of bike that a beginner or a veteran will both feel comfortable on, and that both will get excitement and satisfaction from. One reviewer sums it up perfectly when he says “Some motorcycles just feel right when you swing a leg over, sit down, and flick up the kickstand. The Scrambler nails it.” This bike has Italian style in an enjoyable package. We suspect and hope that lots of people will open their wallets for one. 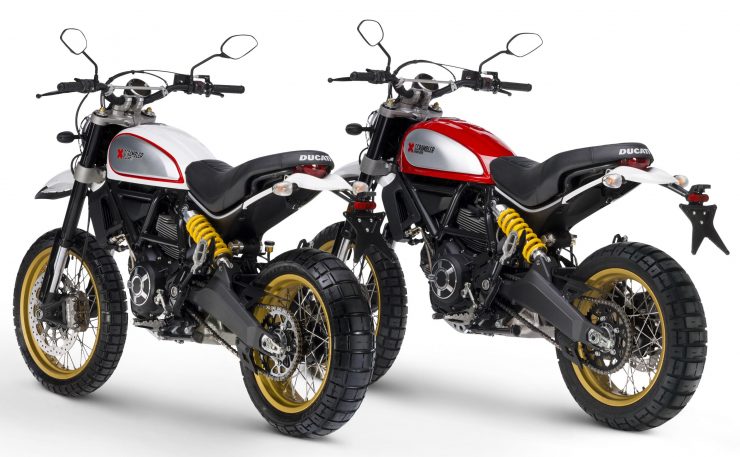 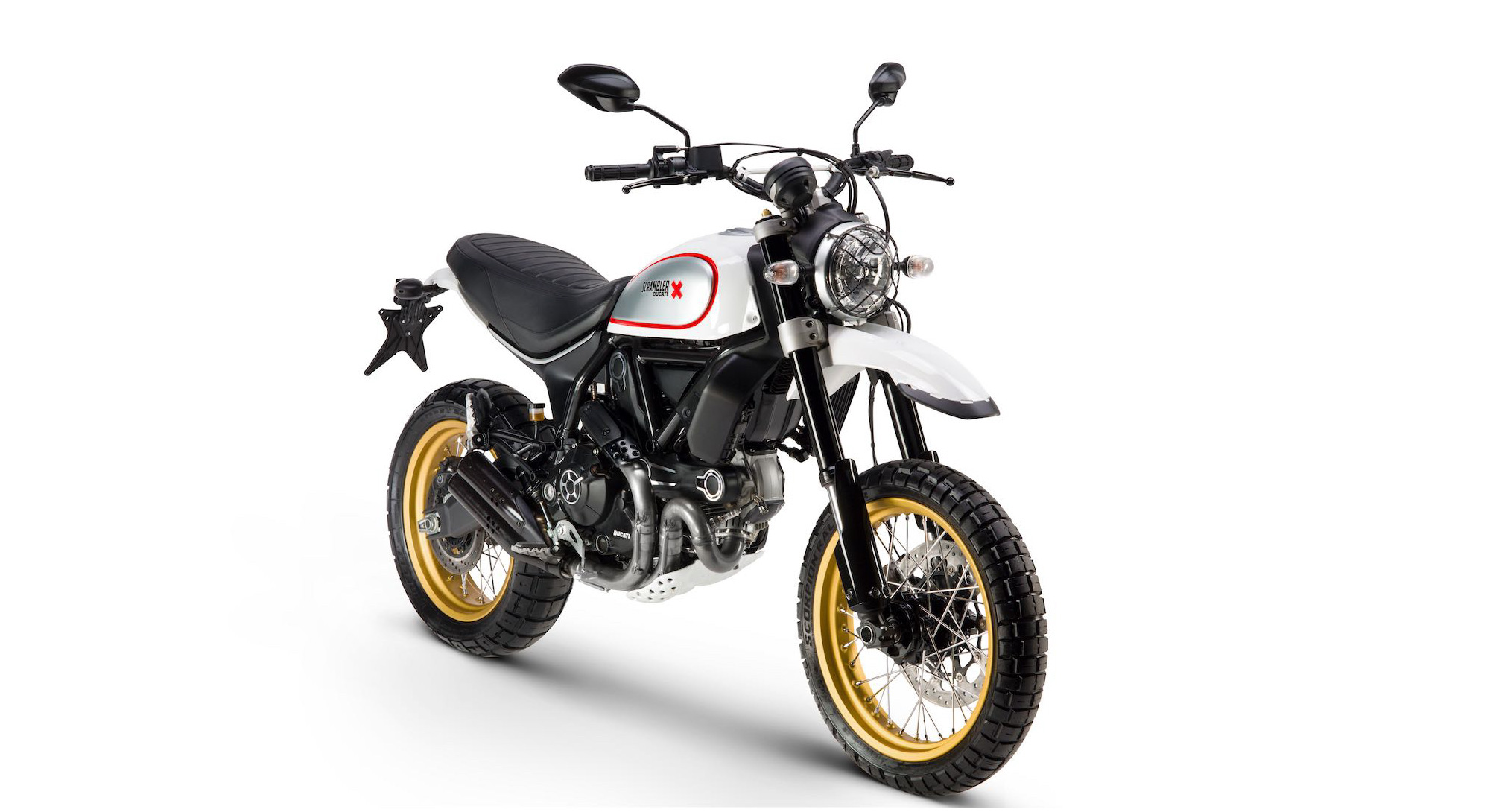