A Brief History of the Moto Guzzi Le Mans 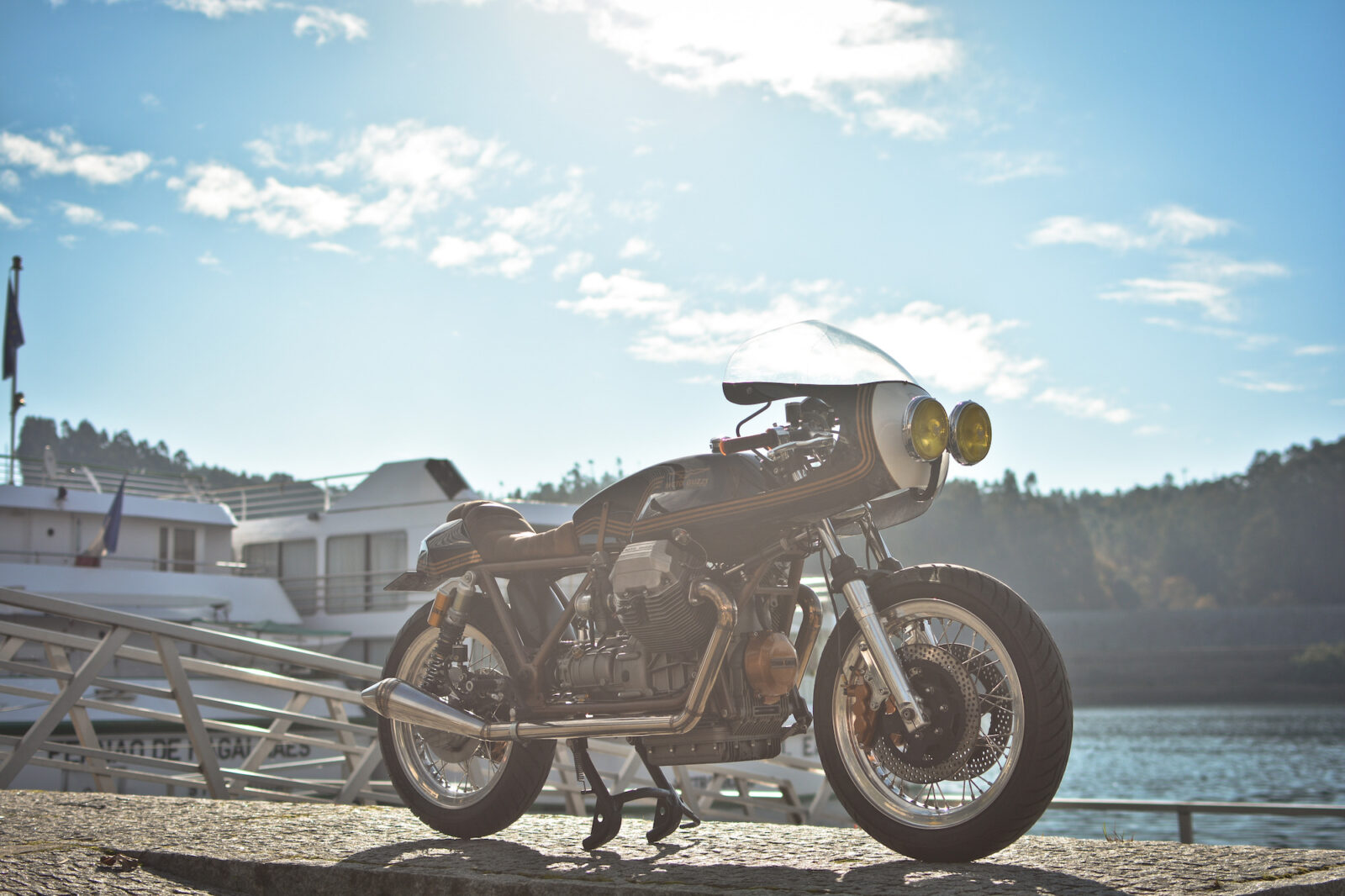 The Moto Guzzi Le Mans began life on the race track back in 1971 when Dutchman Jan Kampen decided to build a racing Moto Guzzi for the Zandvoort six-hour race. Kampen’s bike had the Moto Guzzi V-twin engine’s capacity increased to 810cc. As Kampen and Moto Guzzi engineer Lino Tonti were in regular communication with each other, the idea of an increased capacity performance Moto Guzzi inspired Tonti who got to work on a competition design of his own.

Tonti’s idea was to increase engine capacity to 844cc and he created a racing bike with that engine capacity and entered it into the 1971 Bol d’Or 24-hour at Le Mans. The Moto Guzzi led the race for the first 10 hours until a broken rocker slowed it down. Despite that failure the bike finished in a respectable third place – and Lino Tonti knew he was onto something. 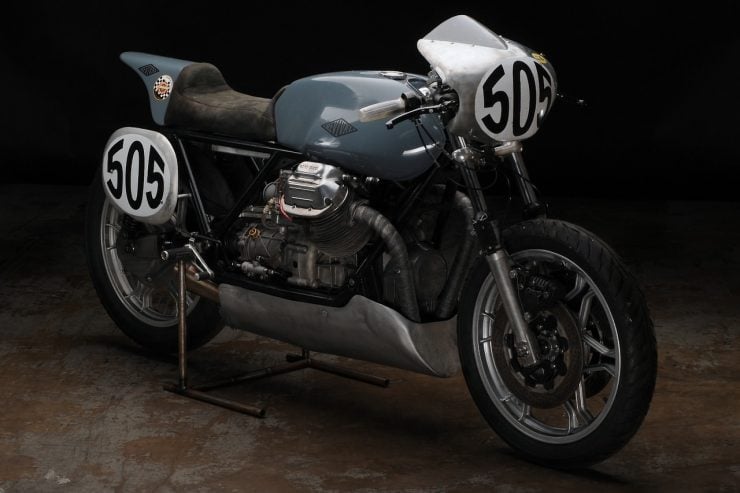 From that successful beginning Lino Tonti set about creating a successful racing bike and on using the racing bike as the basis for a production road bike. He showed his initial design concepts at the 1972 Premio Varrone design competition. By 1973 Tonti had his design concept largely finalized and his works prototype was entered in the 1973 Barcelona 24-hour in which it finished fifth. Lino Tonti was ready for his prototype to enter production – but it was not to be just yet. Both Moto Guzzi and Benelli were owned by Argentinian businessman Alejandro de Tomaso and he made the executive decision to have the Benelli Six spearhead his sports bikes. So the Moto Guzzi “Le Mans” was put on hold for a couple of years, eventually being shown at the Milan Motorcycle Show in November 1975 and entering production in 1976. In the marketplace of the seventies, Moto Guzzi were up against stiff competition from the invasion of the Japanese motorcycles from the likes of Honda, Kawasaki, Suzuki and Yamaha.

The café racer style of motorcycle had continued to be popular and it was into that segment of the market that Tonti intended his new Le Mans to compete. Thus it was that Lino Tonti introduced the Le Mans model in the café racer style with a diminutive “bikini” style front fairing. The fairing was sufficiently small that one commentator has described it as being “just about big enough to keep the ignition key out of the slipstream”. The design team at Moto Guzzi got the styling of the Le Mans right however and the motorcycle has a clean aesthetic look to go with the performance it had demonstrated on the race track. The bikini front fairing was small so it provided the stylish look of a race track bike without risk of it generating lift at speed. 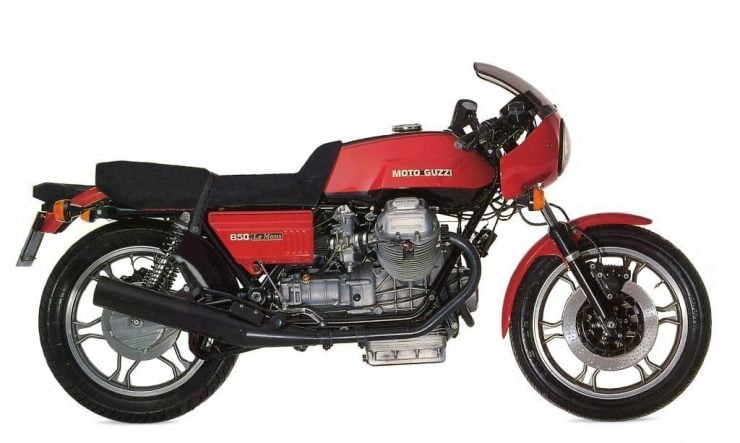 The Moto Guzzi 850 Le Mans had the 844cc four stroke OHV two valve per cylinder air cooled V-twin engine as developed by Lino Tonti for his prototype models, producing a claimed 80bhp (measured power at the rear wheel was 71bhp). Compression ratio was 10.2:1. Transmission was a five speed gearbox with a shaft drive. Top speed was approximately 130mph. The exhaust system had been designed by Lafranconi and was whisper quiet. The 36mm Dell’Orto pumper carburettors were provided with wire covered velocity stacks for air intake so they were not quiet resulting in some riders humorously suggesting they felt their kneecaps might be sucked into the intakes.

This original Moto Guzzi V-twin design was solid and a bit old fashioned but it certainly delivered speed reliably although quarter mile acceleration figures disappointed some. One result of that big solid engine with its heavy crankshaft/flywheel assembly mounted longitudinally was the feeling that the bike would twist sideways as the throttle was blipped. Something that riders either liked, or didn’t, but it certainly gave the bike personality. The frame of the 850 Le Mans was a derivation of that of the Moto Guzzi 750 S3. The front forks were telescopic whilst the rear swing arm featured twin shocks adjustable for pre-load.

The braking system was of an integrated type featuring twin Brembo 300mm front discs and a single 242mm rear disc. The integration of the braking system meant that the handlebar brake handle operated the front right brake whilst the foot brake pedal operated the left front brake and the rear brake. This level of sophistication may have been thought preferable because some shaft drive Moto Guzzi V-twins of this time had demonstrated a propensity for rear wheel lock-up. This was reported by the Western Australian Police when they evaluated the Moto Guzzi police model in the mid seventies for example. Wheels of the Le Mans were cast-alloy FPS (Fratelli Pedrini Sarezzo – Brescia) with 4.10-18 front tires and 4.25-18 at the rear. The styling of the 850 Le Mans was masterful, clean, and unmistakably Italian.

The small front fairing was fitted with an Aprilia headlight except for the United States market where Department of Transport regulations forced the use of a sealed beam unit. The sealed beam unit protruded from the fairing spoiling the intended look. There were two series variants of the first model 850 Le Mans. The rear light of the early Series 1 model was a round CEV unit but after only about two thousand bikes had been produced this was changed to a De Tomaso designed rectangular tail light for the Series 2. The fuel tank was stepped and of 5.9 US gallon (22.5 liters) capacity. The bike’s seat extended up onto the fuel tank in the Series 1 and was a two seater stepped design so the pillion passenger sat a little higher than the rider.

The Series 2 had some modest modifications including a different rear mudguard, black fork sliders, the De Tomaso tail light, and a larger one-piece seat made of injection molded foam. Paint color scheme for these bikes was usually red and black although some bikes were made in metallic blue with orange around the headlight on the fairing, and a very few were made in white. About four thousand of the Series 2 bikes were made. 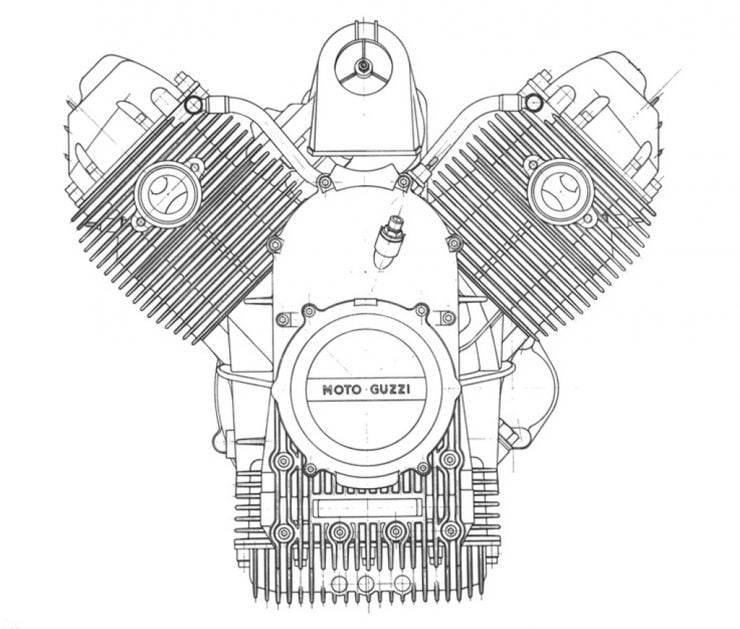 The 850 Le Mans II was introduced in 1978 two years after the the 850 Le Mans. The main noticable difference in the 850 Le Mans II was the front fairing and headlight. The fairing itself grew and the round headlight was replaced with a rectangular one. The half fairing wrapped around the engine but left the cylinders fully exposed, covering the carburettor intakes both to quieten them and perhaps to remove the fear for one’s kneecaps mentioned earlier.

The engine of the 850 Le Mans II featured cylinder bores lined with Moto Guzzi’s patented Nigusil. Nigusil stands for Nickel-Guzzi-Silicon and it was a nickel-silicon alloy applied by a special process to the cylinder bores. It was created as a better lining surface for the cylinder bores than chrome. Nigusil was applied to bikes from engine number 80390 in Europe in mid 1980 and it enabled the use of lighter pistons and rings with closer tolerances which helped with cooling. Nigusil provided a significantly lowered friction coefficient and also reduced the engine’s oil consumption. 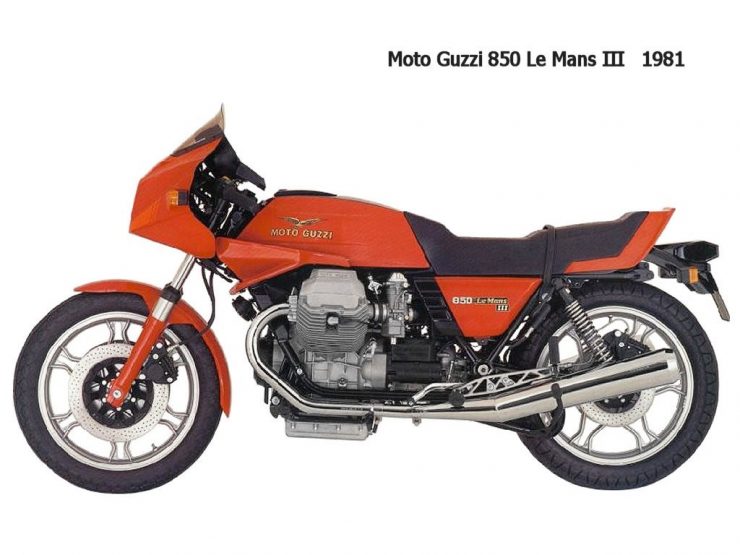 The Le Mans III had many changes most notable were the improvements to the engine including changed cylinder heads and cylinder barrels, the pushrods were moved outwards in preparation for a later increase in bore size, carburettors and exhaust systems were changed also, so the result was increased power and torque. The styling of the bike was changed also with alterations made to the fairing, fuel tank and seat. Suspension was improved with fitting of air-assisted damping. 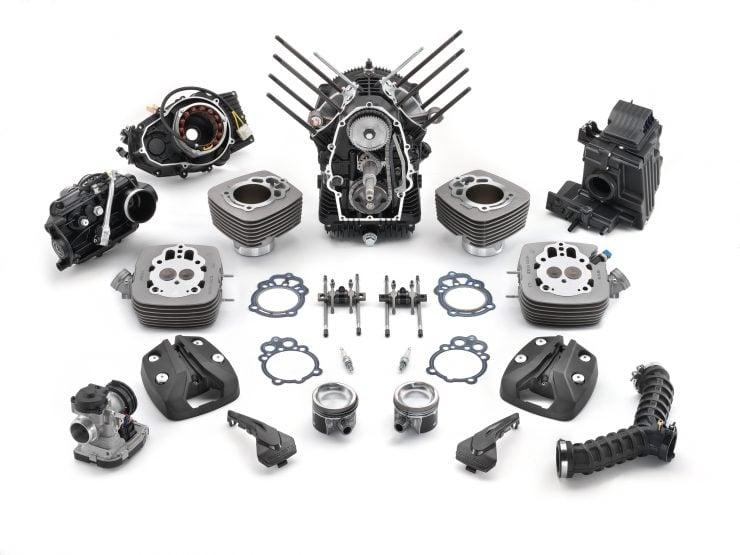 The Le Mans 1000 (sometimes referred to as the Le Mans IV) entered production in 1984 and was made until 1993 in two series. This was a quite different looking motorcycle although still unmistakably a “Guzzi”. The seat was changed and flowed in an upward curve from the fuel tank. The half fairing grew a belly pan and the riding position was made a little more upright for touring.

The cockpit instrument panel was mounted in the fairing which had been developed in the Mandello del Lario wind tunnel. Engine capacity of the Le Mans 1000 was increased to 949cc with 40mm pumper Dell’Orto PHM 40 carburettors to ensure an adequate fuel air supply to that larger engine. This bike was also fitted as standard with the B10 camshaft originally used in the factory production racing model and had larger valves. The Le Mans 1000 was also fitted with a new new Valeo starter. The frame of the bike remained much the same as the previous models but with a modified steering head and altered rear. 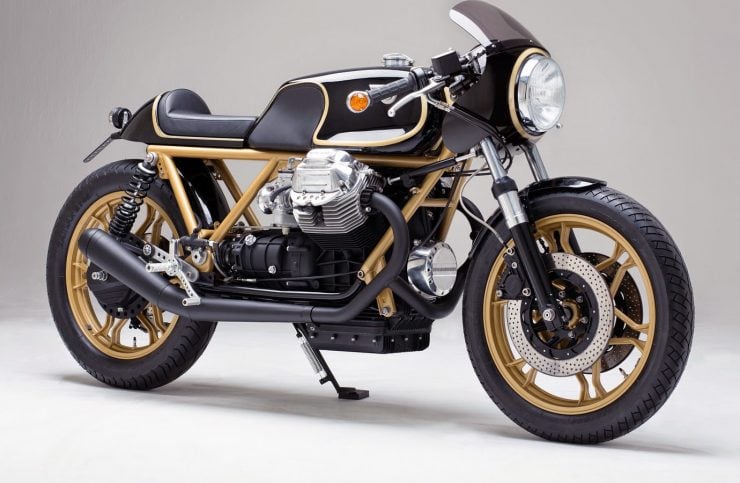 The Le Mans 1000 SE was introduced in 1986 and made for two years. The Le Mans 1000 SE was a limited production model made to mark the twentieth anniversary of the introduction of the Moto Guzzi V7 back in 1967. These bikes were all finished in red and white with a red seat, red cast wheels and most had black rocker covers, engine and lower rails. A few had black engines and transmissions. Only about 100 of these bikes were sold in the United States. 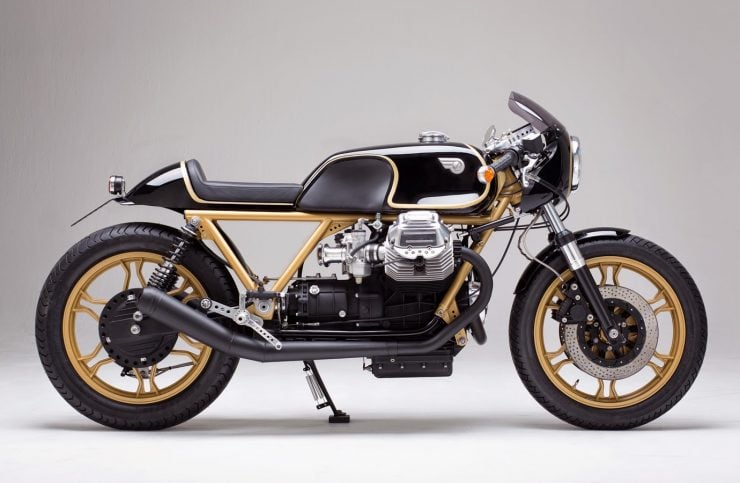 The Moto Guzzi Le Mans began as a stylish and almost minimalist café racer style bike built around a solid engine and transmission with shaft drive which makes it in many respects something like a café racer BMW R Series except the engine is a V-twin and the bike has Italian and not German styling. The gearbox was built solidly so the gear-change has been criticized as being perhaps a bit “agricultural” but it worked well and showed good endurance.

The name “Le Mans” should tell us straight away that this was not intended to be a sprinter but a long distance marathon bike with the combination of speed and solid reliability to not only go fast but to keep going fast hour after hour. The longitudinally mounted V-twin engine and shaft drive give the Moto Guzzi a very different personality to other bikes including the Harley-Davidson V-twins, the British bikes, and those from the Land of the Rising Sun.

The Moto Guzzi Le Mans got progressively heavier over the years as it “matured” and so the later models may be regarded as more refined in some respects, but the earlier models are lighter and there is little performance difference between them and the heavier larger capacity ones. All things considered, the Le Mans is a classic motorcycle with styling that lives on in the modern Moto Guzzi range, and they offer a solid reliability (if properly cared for) that can be sorely lacking in many vintage bikes. 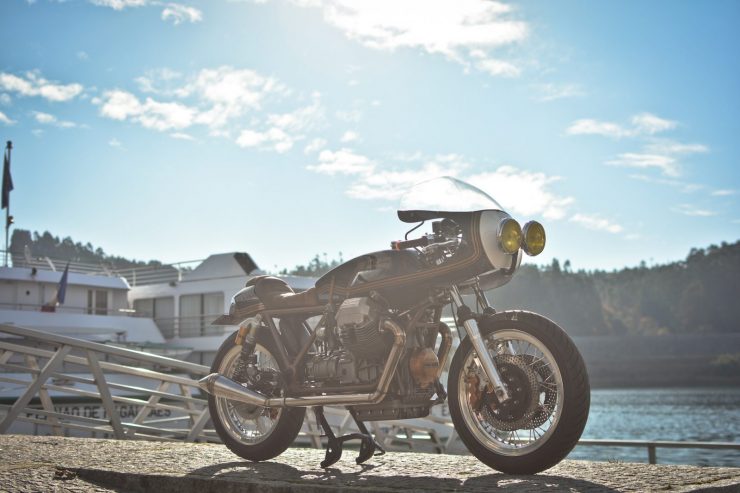 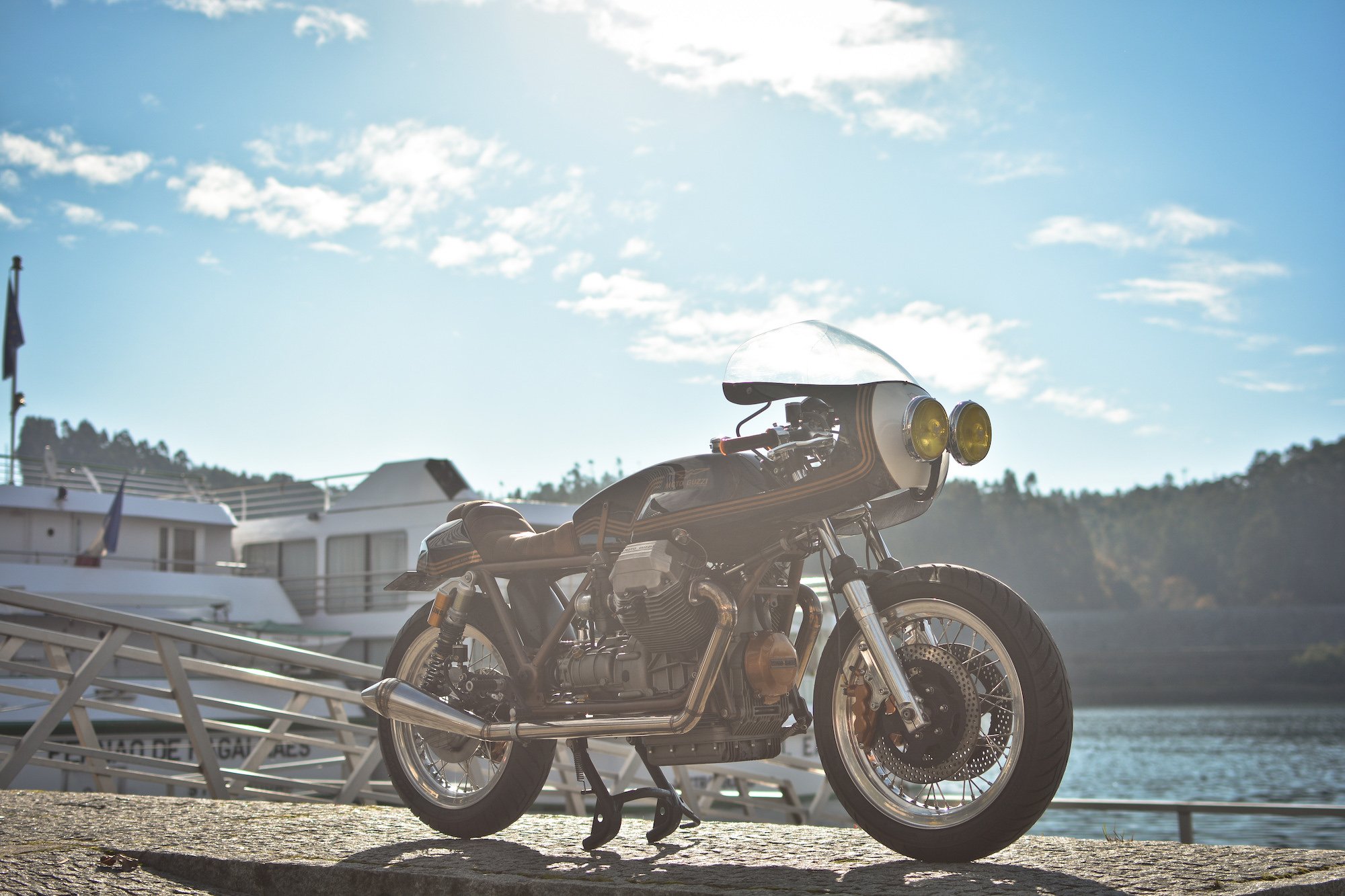