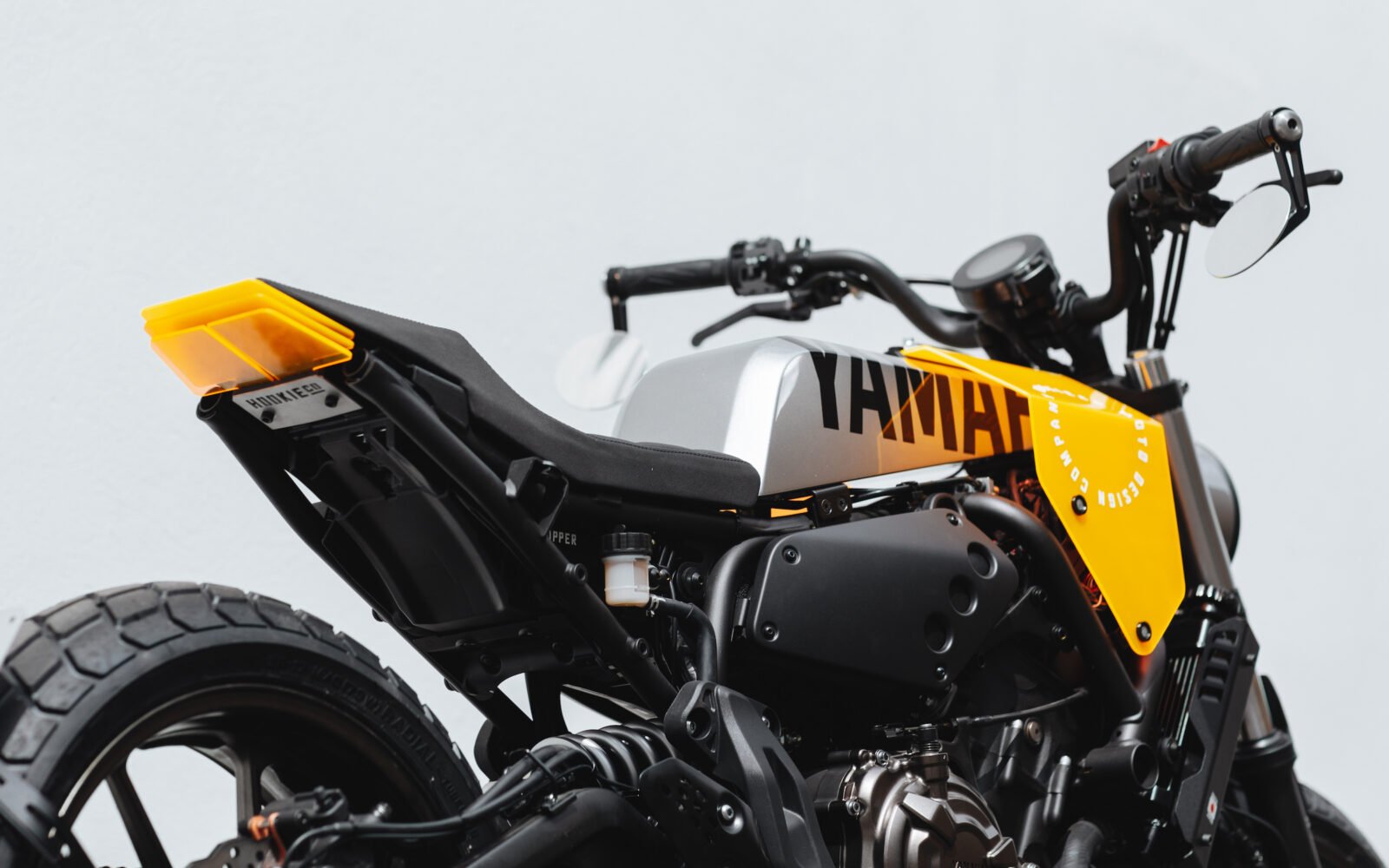 This custom Yamaha XSR700 is the work of Hookie Co., a German workshop that have become world-leaders in the field of developing and selling kits that allow people to customise their motorcycles at home using simple hand tools.

So far, Hookie Co. have developed multiple Moto-Kits for the BMW R nineT and the new one you see here, for the Yamaha XSR700. The kit was developed for the XSR700 as part of the popular Yamaha Yard Built series – an annual event where a number of custom motorcycle builders are given the same Yamaha model and a budget to customize it. Public voting then takes place, and the winner gets a cash prize.

The design brief for the most recent Yard Built challenge was “playful, sporty, and classic”, leaving plenty of room for interpretation. Rather than looking to the past for inspiration the team at Hookie looked to the future, developing a series of bolt-on parts with a futuristic Blade Runner feel that’s sure to be popular with both current and prospective XSR700 owners. 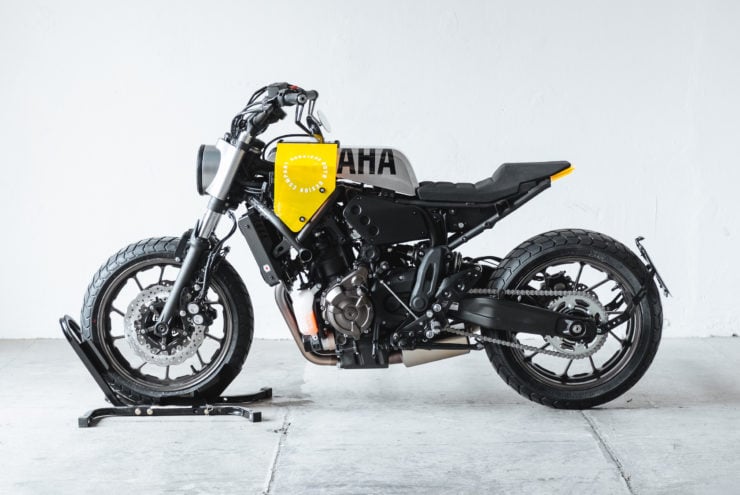 The Yamaha XSR700 was originally designed by custom motorcycle legend Shinya Kimura as a modern interpretation of the classic Yamaha XS650 from the 1960s and ’70s. The XS650 was one of the most important Yamaha models of the time, race versions of the model won championships with “King” Kenny Roberts in the saddle, and thanks to their tough nature many have survived to the modern day.

Once the initial design had been completed by Shinya Kimura it was made into a mass production design by the Yamaha design team in Italy, and then put into production at the Yamaha-MBK factory in France. The XSR700 uses the engine, frame, chassis, and braking system from the popular Yamaha MT-07, this significantly reduced development costs and time, and it makes life a lot easier for XSR700 owners needing parts or servicing, as Yamaha has sold a huge number of MT-07s since the model was introduced in 2014.

The engine used in the MT-07 and the XSR700 is a 689cc, liquid-cooled parallel twin, with double overhead cams, eight valves, fuel injection, and 74 hp at 9000 rpm with 45 ft lbs of torque at 6600 rpm. Power is sent to the rear wheel via a 6-speed constant mesh transmission, the engine is a load-bearing member of the chassis, front suspension is traditional telescopic forks, and there’s a monoshock in the rear. 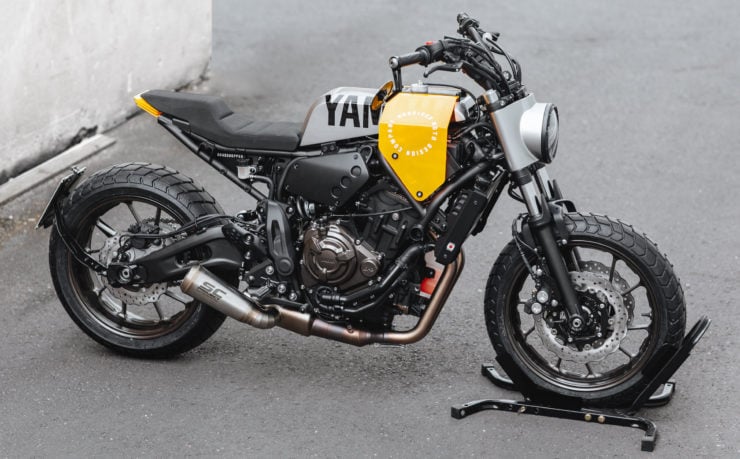 The Moto-Kit by Hookie Co. for the XSR700 includes a new aluminum gas tank, a new tracker seat upholstered in Alcantara, 3D printing is used to produce the acrylic panels on either side of the fuel tank and tail light, and there’s a new bolt-on tray underneath to mount the seat and fuel tank.

A new LED headlight is also included, with a slide-on aluminum surround, along with an SC Project exhaust, and 17″ alloy wheels with Pirelli MT60 dual sport tires. One of the stand-out features of the Hookie build is the tail light, it’s made of three 3D printed acrylic fins and it functions as both a brake light and a right/left indicator thanks to LEDs in its base that light up the acrylic elements.

The kit can be bolted onto a standard XSR700 over the course of a weekend by one person with access to basic hand tools. No frame cuts or welding are required, and it can all be removed and returned to stock in a matter of hours.

If you’d like to read more about the kit or order your own, you can click here to visit the page on Hookie Co. 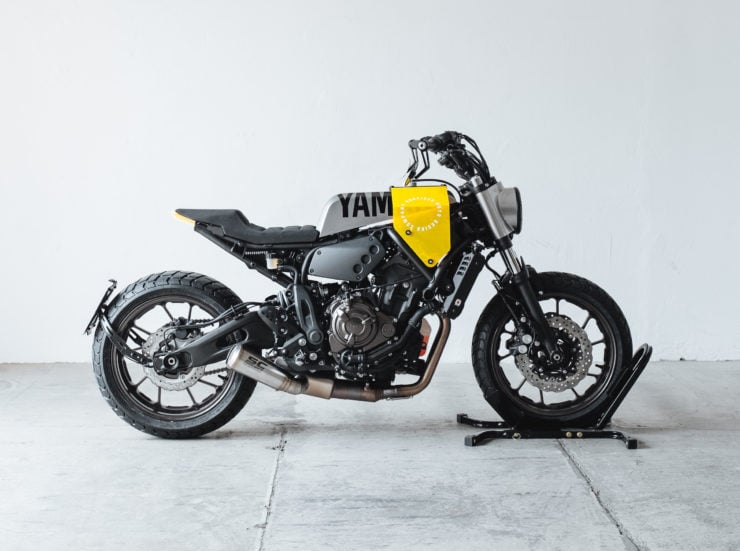 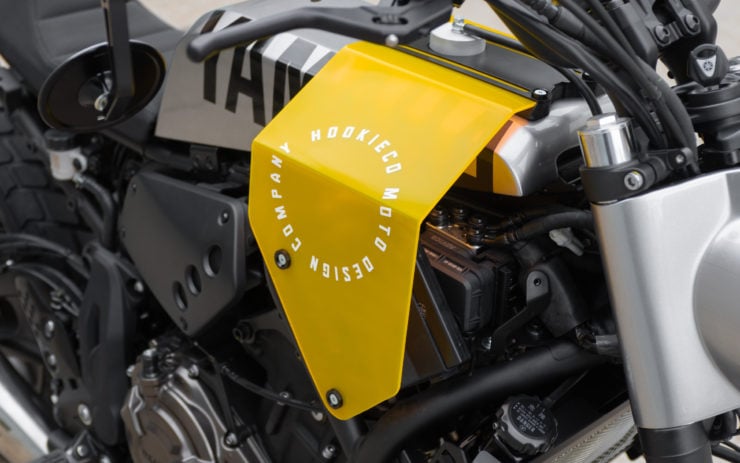 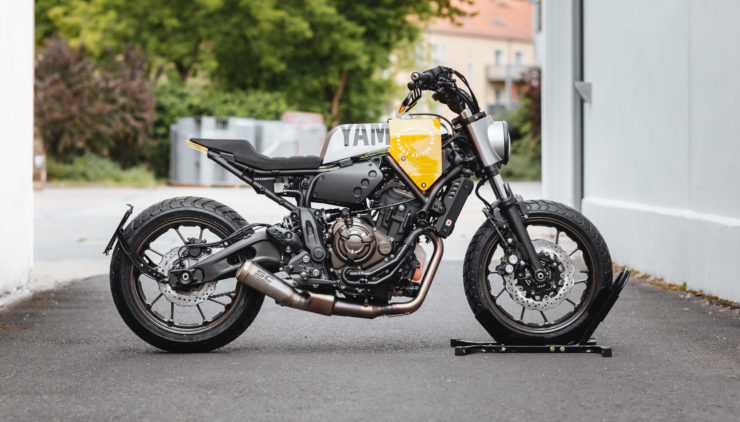 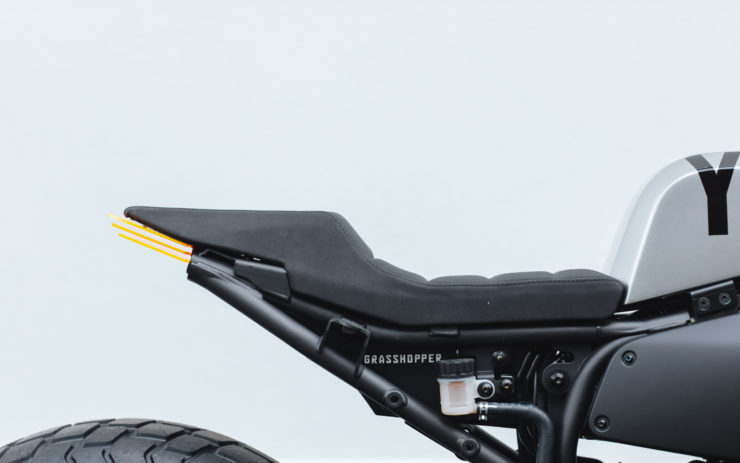 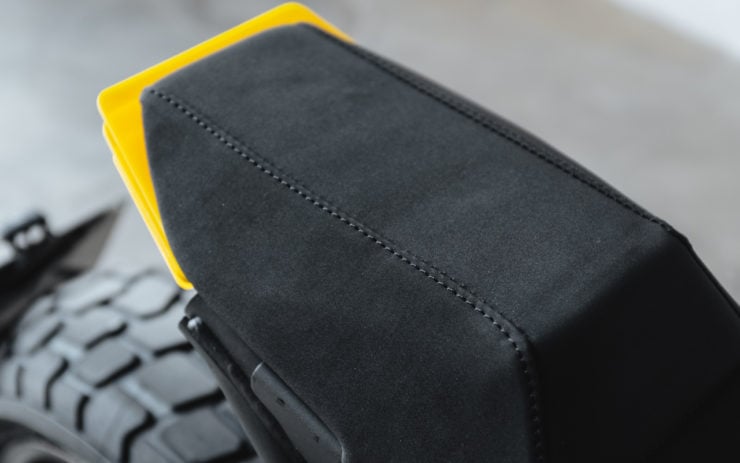 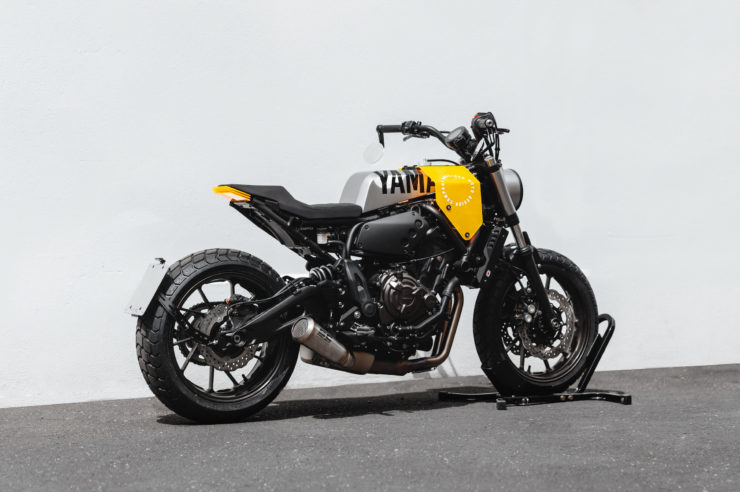 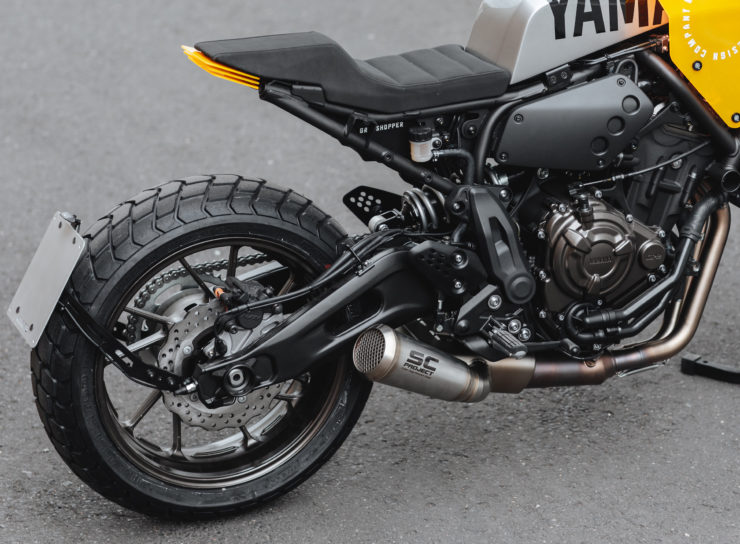 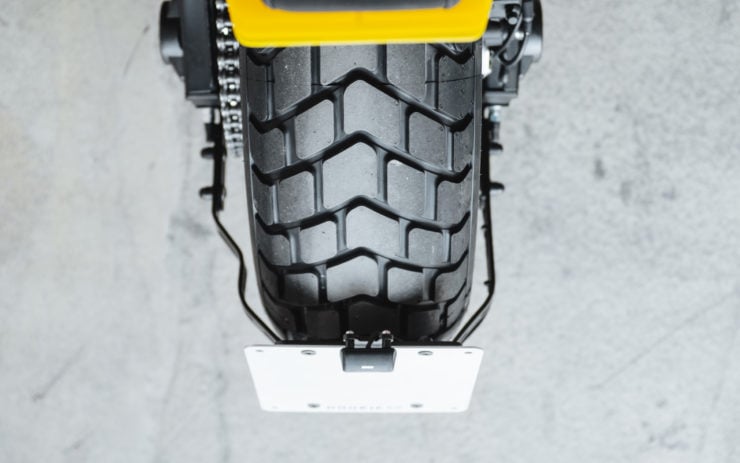 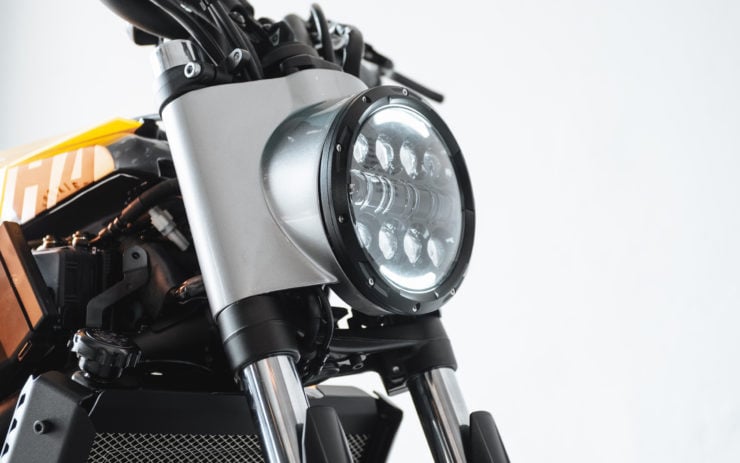 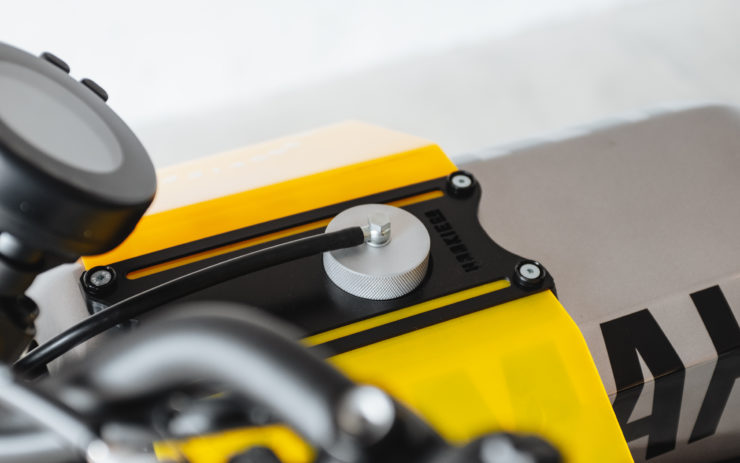 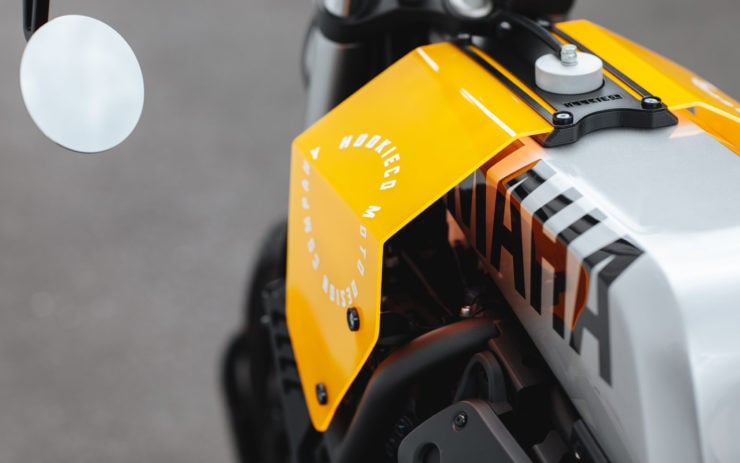 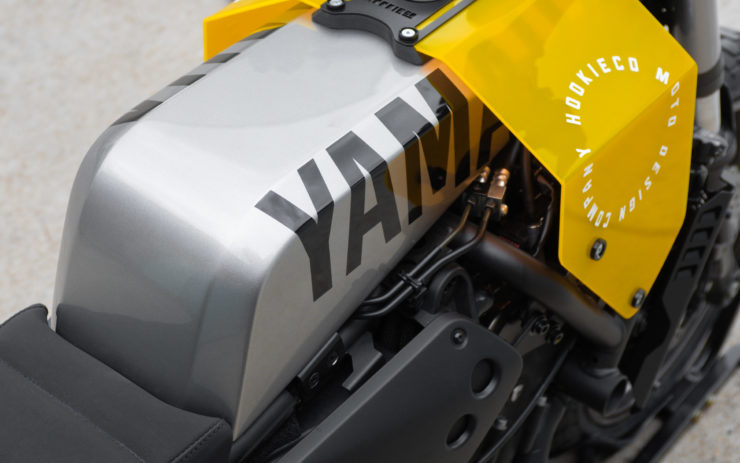 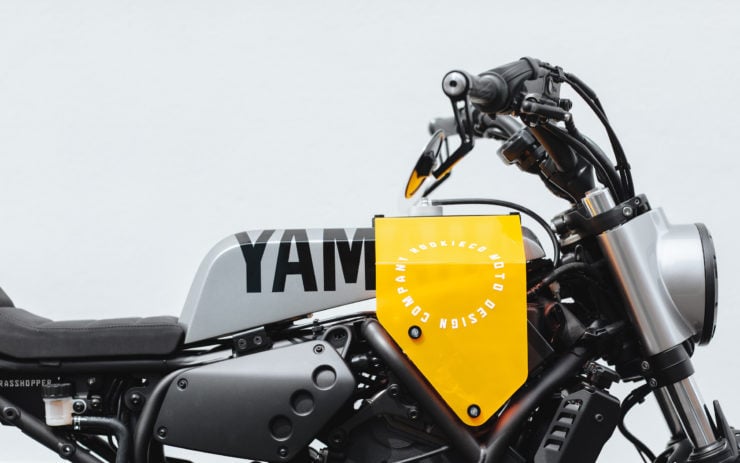 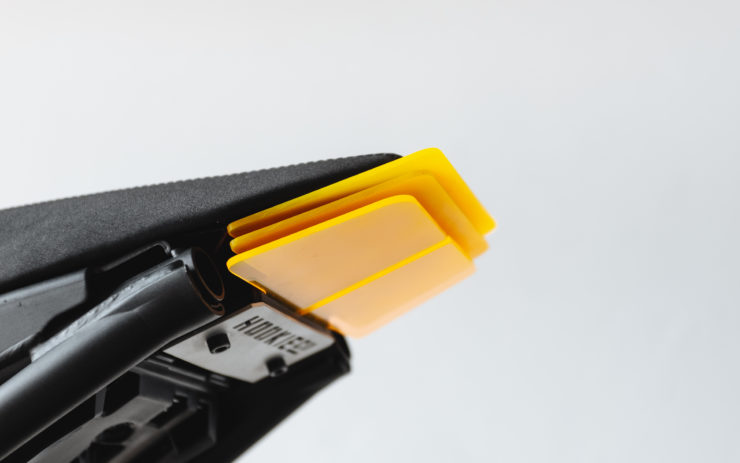 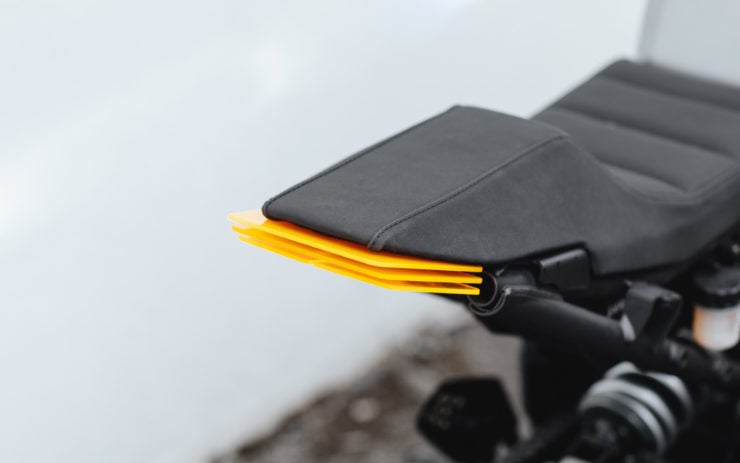 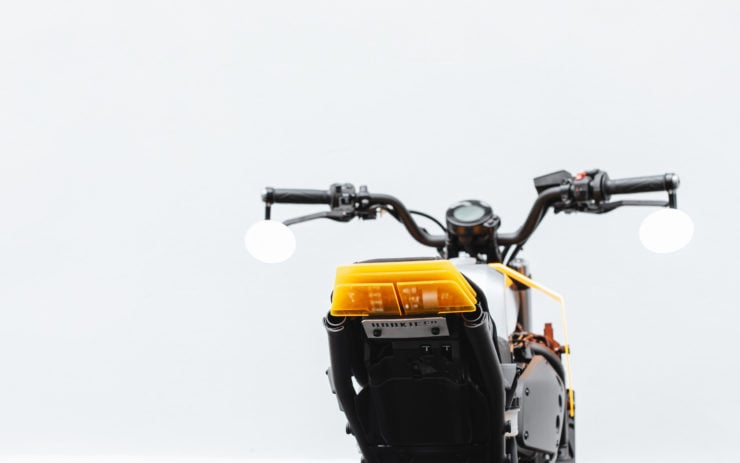 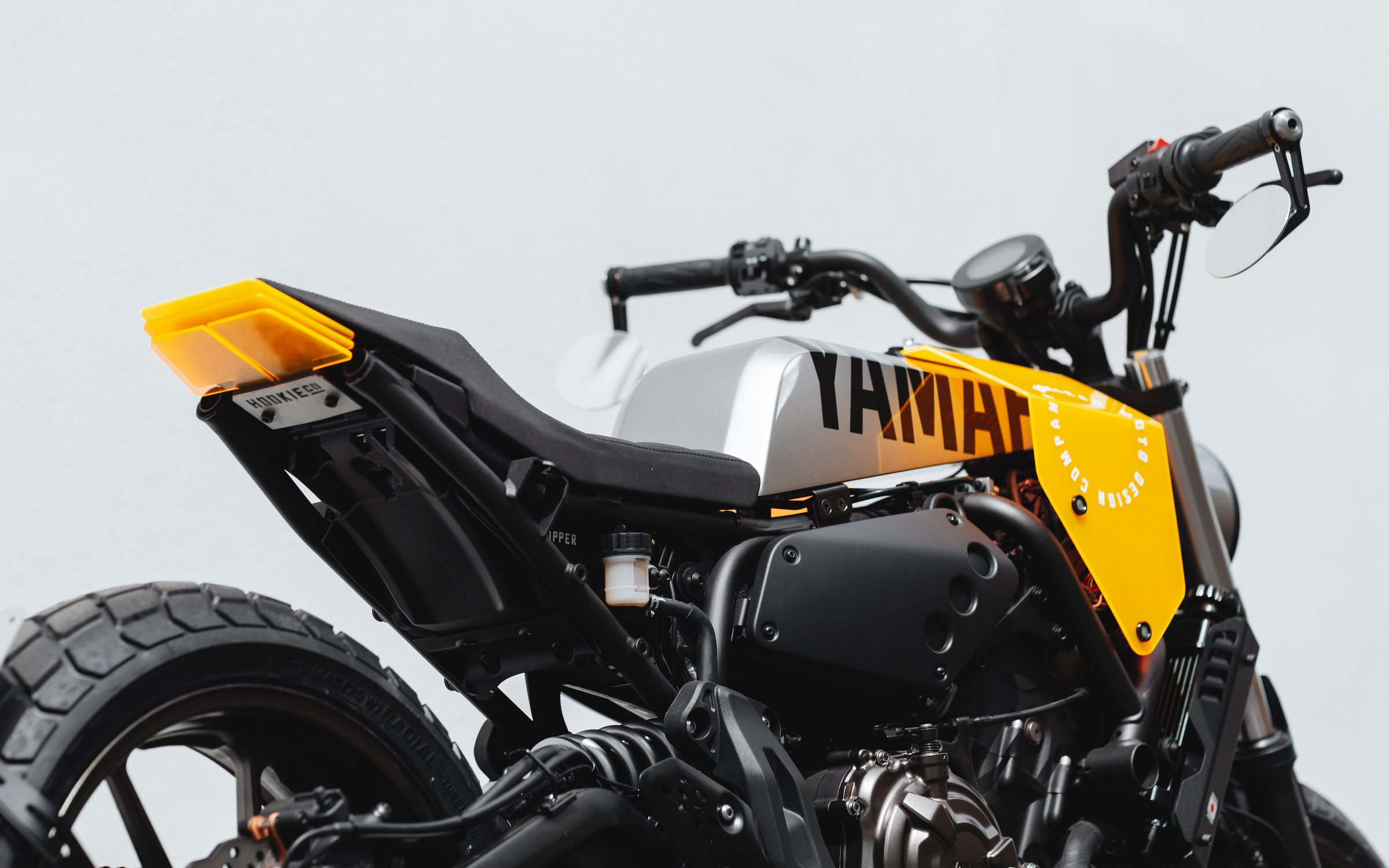