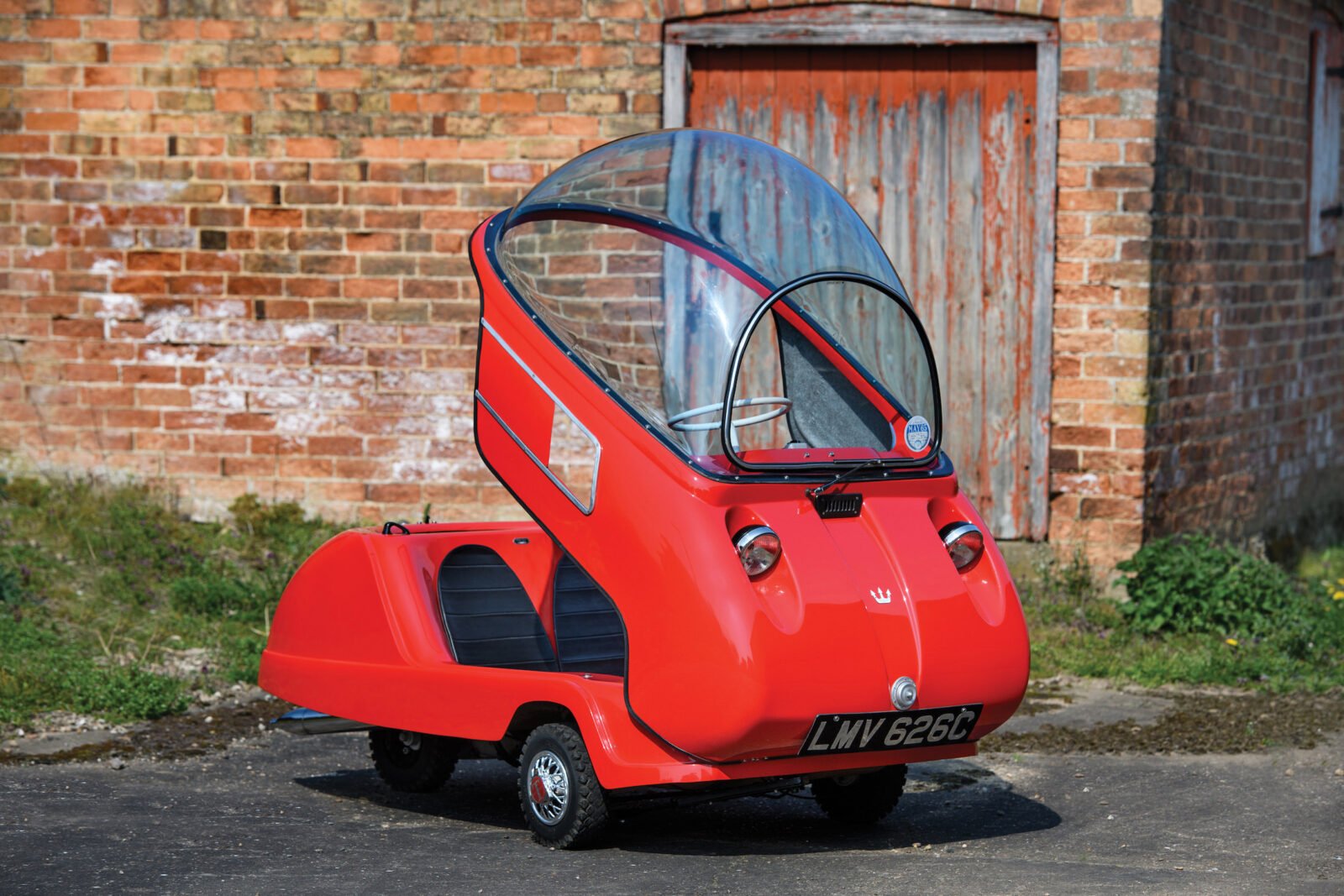 When it was first unveiled in 1964, the Peel Trident was the smallest car in the world. It was developed by the engineers at the Peel Engineering Company on the Isle of Man to be a fuel efficient personal transportation vehicle with seating for two, and a top speed of 28 mph.

The post-WW2 years were a golden age for microcars, much of Europe was under strict rationing which meant access to petrol, steel, rubber, oil, and other essentials was limited. Money was also tight, so vehicles like the Fiat 500, the Messerschmitt KR175, as well as vehicles like the motor scooter were introduced to keep Europe mobile on a shoestring budget.

The Peel Trident was part of a second generation of microcars making use of newer materials, the Peel Engineering Company were well placed to develop the Trident and its sister microcar the P50 as they had extensive experience working with fibreglass. Before undertaking microcar production the Peel Engineering Company made small boats, sidecars, and motorcycle fairings, they also developed a prototype hovercraft and they would later create a prototype fibreglass Mini for BMC. 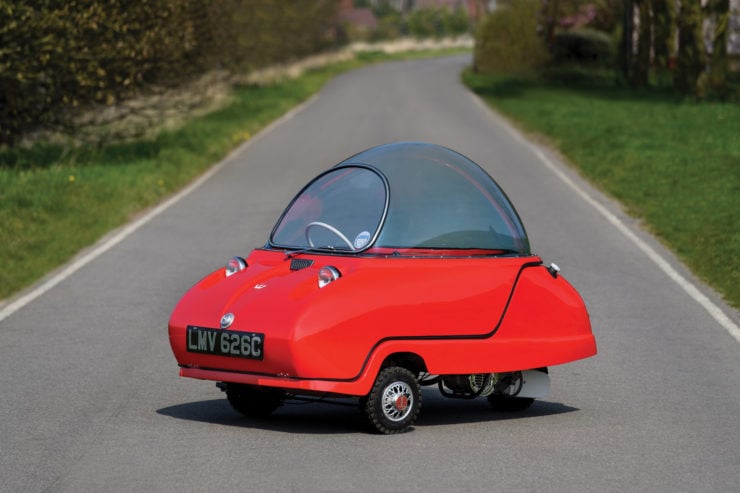 The Peel P50 and the Trident are the only vehicles to ever have been built on the Isle of Man, an island that is a self-governing British Crown dependency wedged inbetween Britain and Ireland in the Irish Sea. The Isle of Man is probably most famous as the location of the race with the same name, the Isle of Man Tourist Trophy, that’s been running since 1907 and remains one of the single most famous motorcycle road races on Earth.

The design of the Trident has been described as space age, the Jetsons cartoon in particular is often referenced, largely due to the large bubble-like dome roof and the small body. The Trident has a monocoque body made from fibreglass, a large Perspex dome offering unrivalled visibility, a flat glass windshield with a wiper, and seating for two.

Steering is accomplished with a traditional steering wheel, turning the two coil-sprung, undamped front wheels. There’s a single centrally located rear wheel powered by a German DKW 49cc single-cylinder two-stroke engine with 4.2 hp. This three-wheel layout meant that the Trident could be registered as a motorcycle, with far lower tax and insurance costs, it could also be driven by anyone with a motorcycle license without needing to pass a separate test for an automobile license. 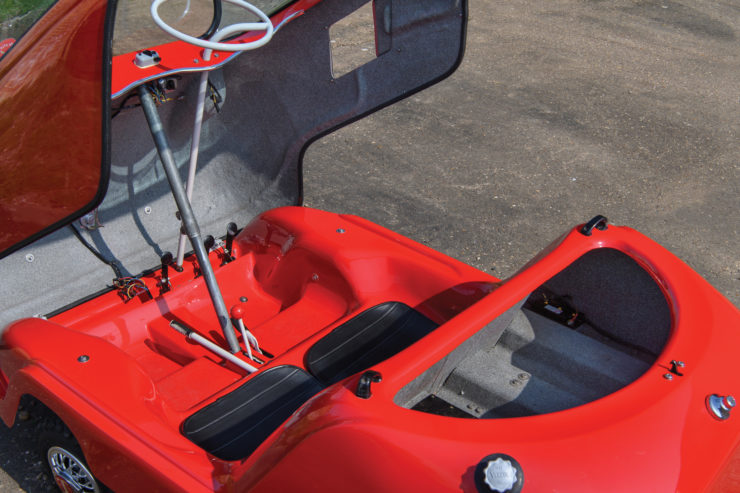 Entering and exiting the Trident requires the top section of the clamshell body to be flipped forward, the driver climbs in and then pulls it closed over their head. There are twin headlights and there’s a small cargo compartment behind the seats for a small amount of shopping.

Only approximately 86 examples of the Peel Trident were built, despite this the car has become a celebrity in its own right featuring on television shows like Top Gear, Top Gear USA, Monster Garage, and Dragons’ Den, it’s also available as a vehicle on the 2018 racing computer game Forza Horizon 4.

In recent years the Peel Trident and Peel P50 have been put back into low volume production, there are both petrol and electric versions available, and pricing runs from £6,250 up to £17,495.

The Trident you see here is one of the exceptionally rare originals, it appeared in the Top Gear magazine and and on the website, and it was featured on a commemorative stamp for the Isle of Man. It’s now due to roll across the auction block with RM Sotheby’s in mid-August with an estimated value of between $80,000 to $100,000 USD. If you’d like to read more about it or register to bid you can click here to visit the listing. 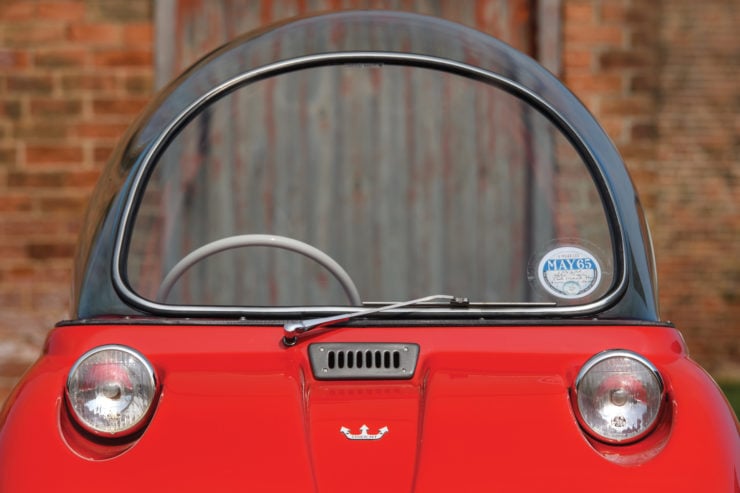 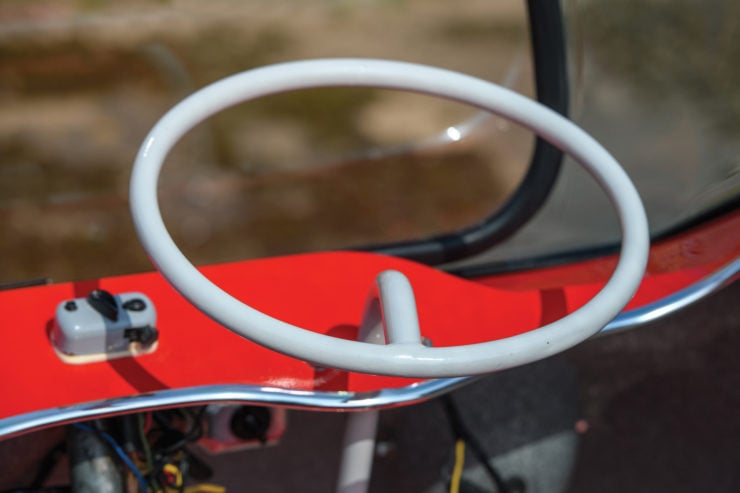 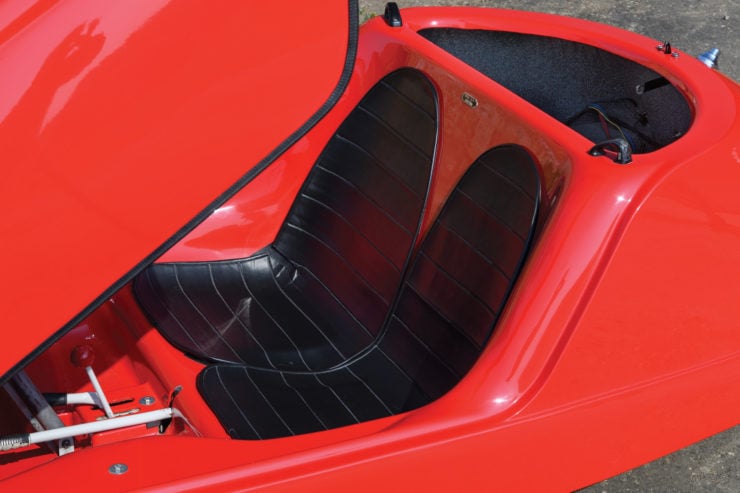 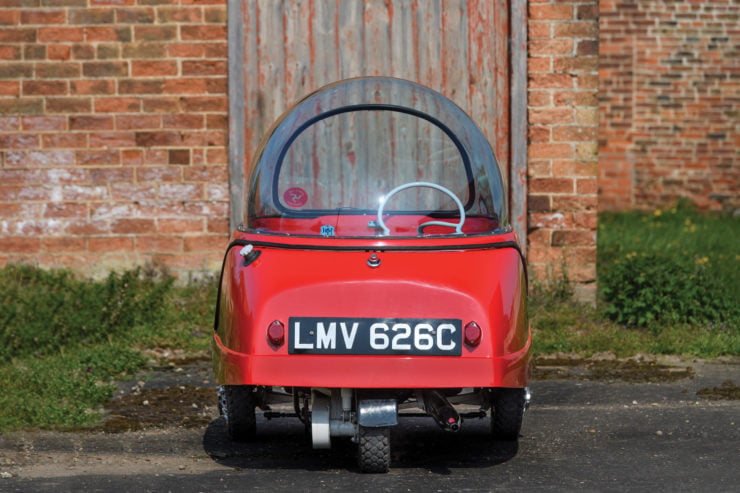 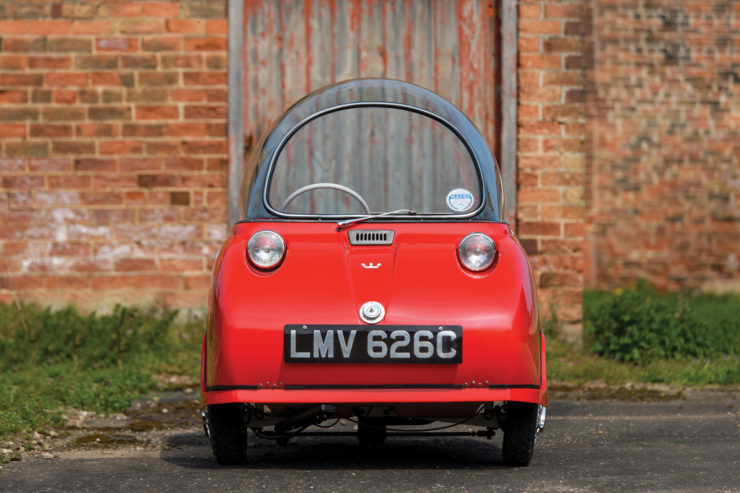 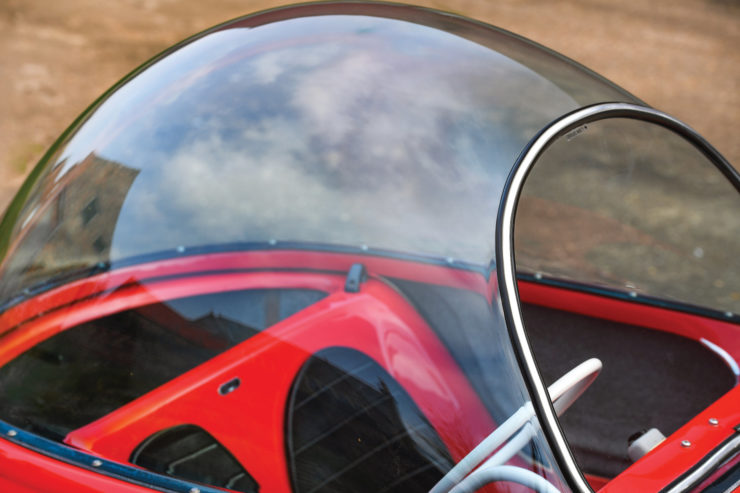 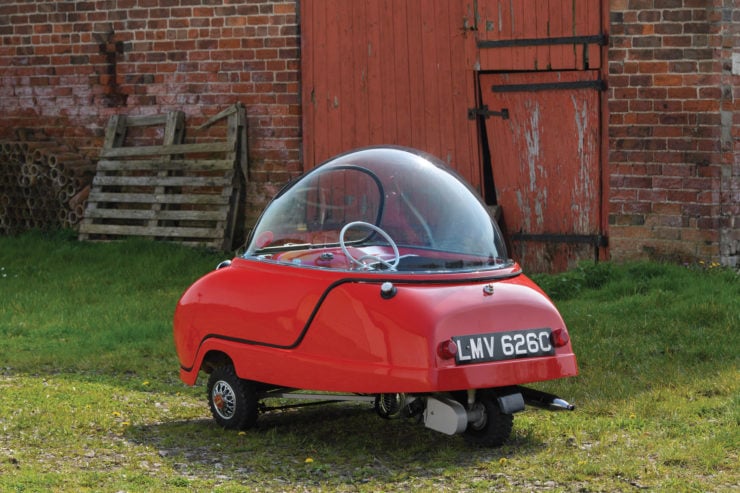 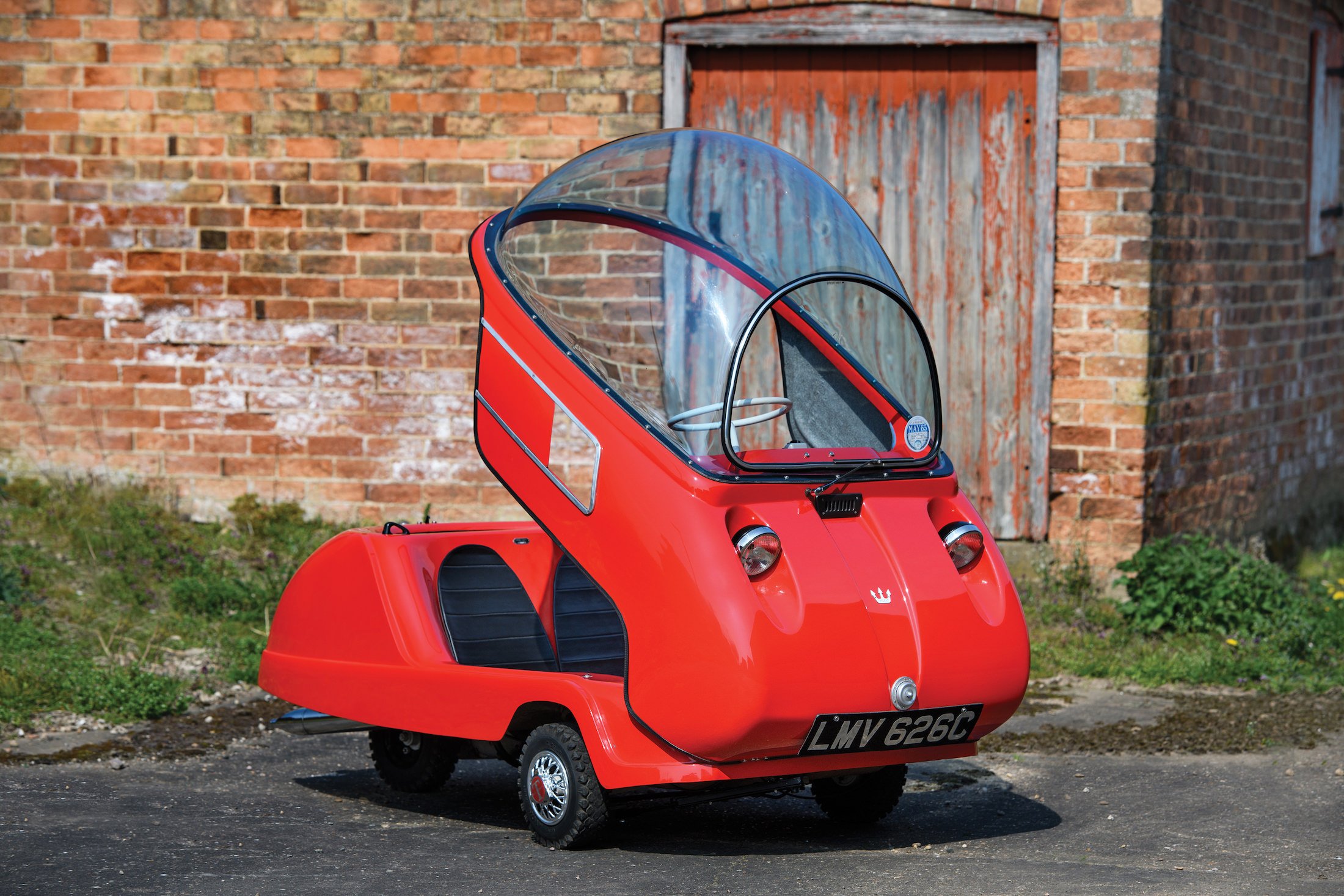