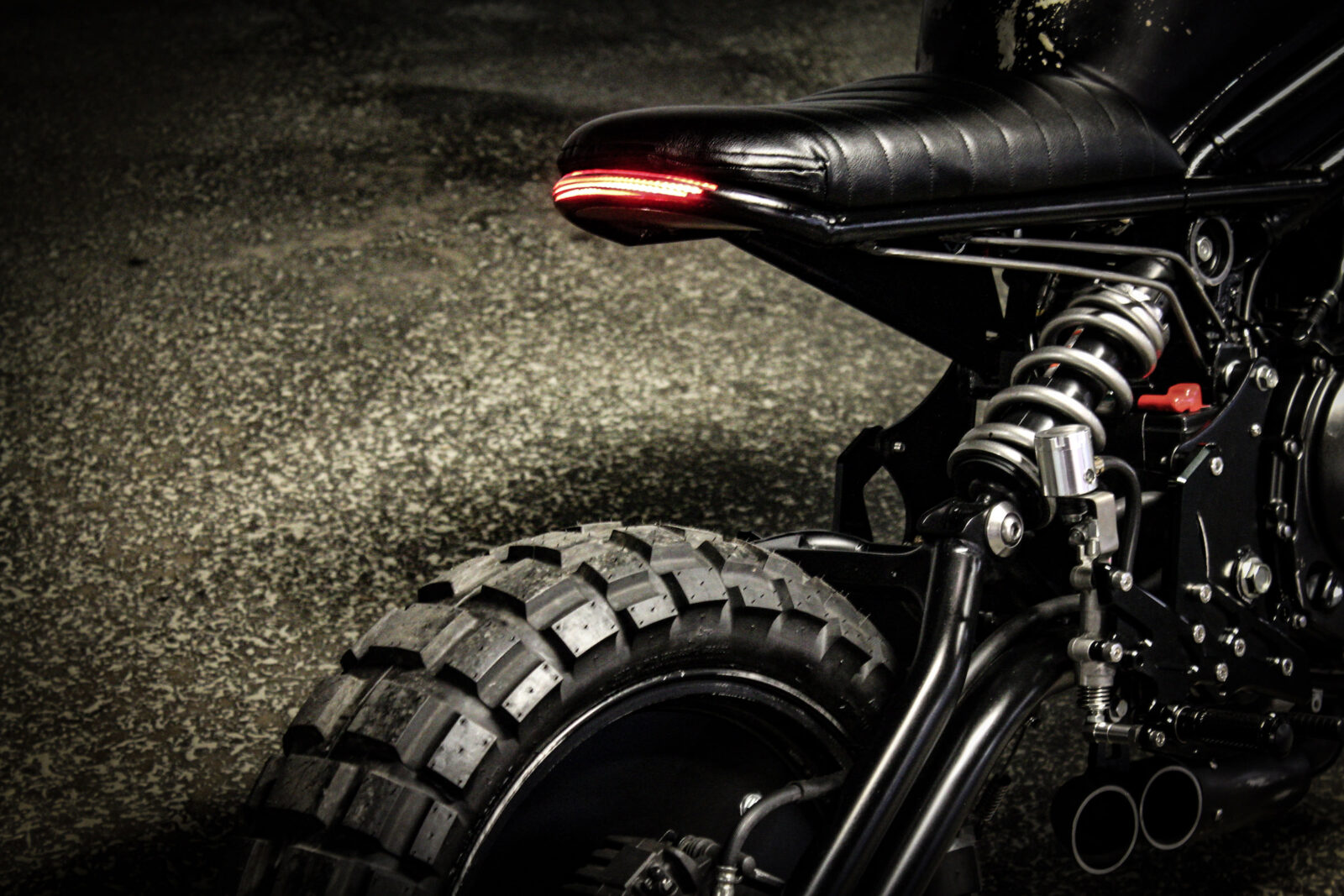 The Kawasaki Ninja 650R isn’t a motorcycle that you’d necessarily think of as a post-apocalyptic machine, but the team at Droog Moto took a look under the fairing and realized they could make something of it – something a little less 9-to-5 and a little more get-out-alive.

Droog Moto is a highly-regarded custom motorcycle garage based out of Washington State, it’s run by an enterprising young couple named Max and Erica Droog who are known for their tough-as-nails, post-apocalyptic scrambler builds.

If you like what you see, this bike is currently for sale by Droog Moto here. The company also sells a range of parts, accessories, and apparel, if you’d like to take a look you can click here to visit the store. The write-up on this build below was penned by Max and Erica – we like to bring the story of a build in the words of the builder (or builders) when we can to give insight into their methods and thought process. 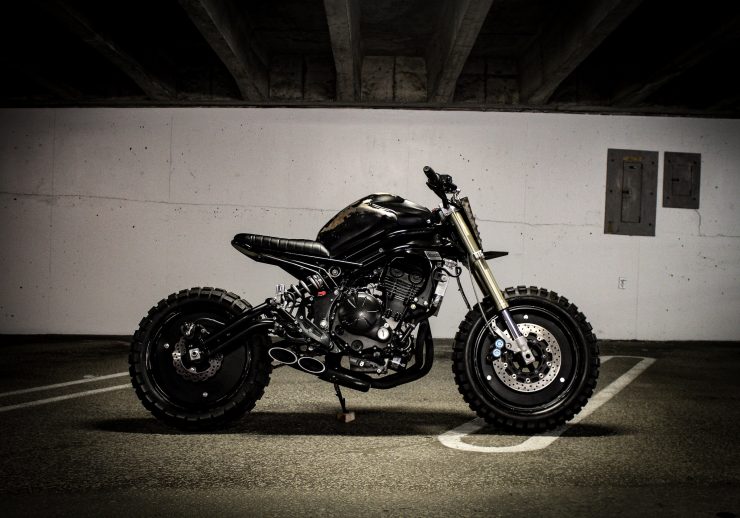 Words by Max and Erica Droog

We have been taking a more modern build approach in terms of donor bikes lately to really transform them into burly futuristic apocalypse (not zombies) machines. We wanted our next build to be something from a great donor bike and knew that the Kawasaki Ninja 650r with its torquey parallel twin motor is what we were after to turn into a rad Urban Brawler.

We picked up a 2013 Kawasaki Ninja 650R and began removing all the unneeded items and clutter. The first and most major item to be amputated was the solid chunk of steel Kawasaki called a subframe. It was roughly 3 feet long and welded onto the main frame.

Once this was removed, we began fabricating a lightweight floating style subframe to compliment the frame and tank lines. We hand made a new seat and had Ampersand Leather Co. in Seattle, WA upholster us a sleek and tight cover. 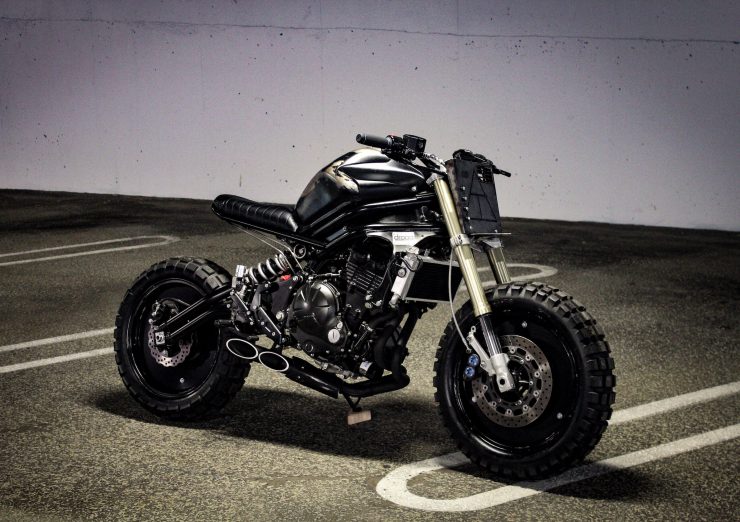 We tucked and relocated all of the electronic items and fit a small lightweight AntiGravity battery into the build. This really exposed the offset shock and gave the bike a unique modern appeal. The rear lighting is integrated into the rear hoop giving the back end a clean and open look.

We then moved onto the fuel tank and gave it the Droog Moto Signature look and fabricated a louvre vent into the tank cover. Per usual, we equipped Moto 12 with a rugged and raw steel tracker plate which house four very bright LED pod lights featuring high and low options, LED turn signals along with an insert cut louvre to compliment the fuel tank. The tracker plate was paired up with a fork conversion to give the build a suspension improvement and more modern touch. The forks were setup with our Droog Moto 1 1/8” handlebars, Trailtech Endurance 2 speedometer and thick comfy wire tied grips!

The exhaust was re-worked with a stubby dual exit silencer and custom heat shield. The stock radiator was removed and upgraded with an aluminum one. To finish off the build, we hand made aluminum wheel inserts to pair up with the chunky Continental TKC80 tires. 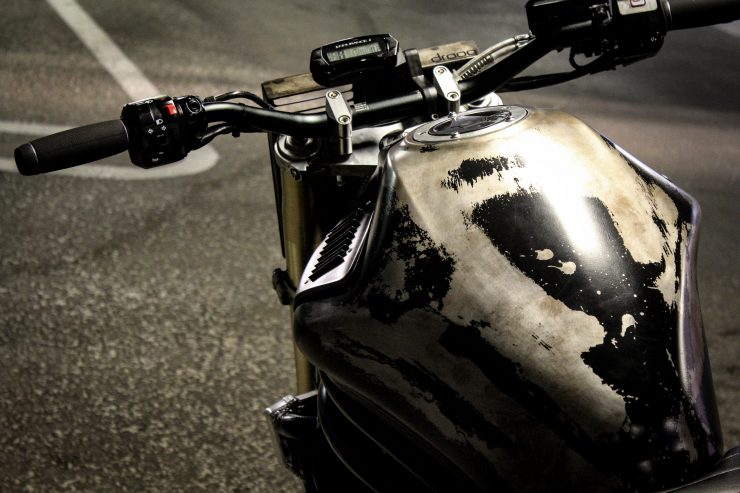 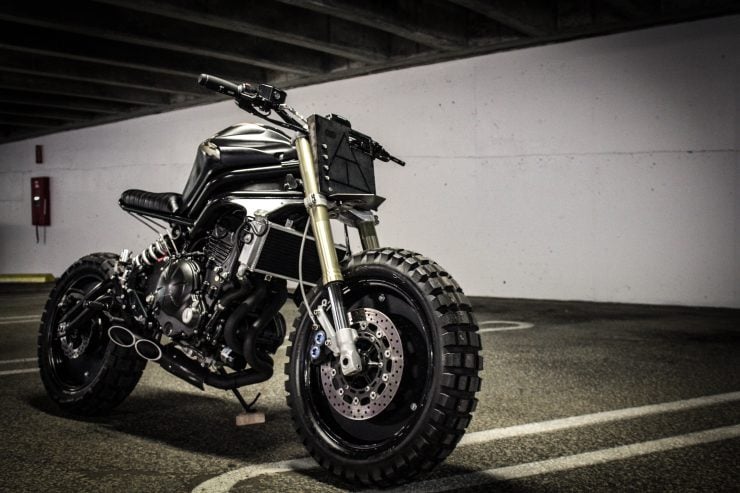 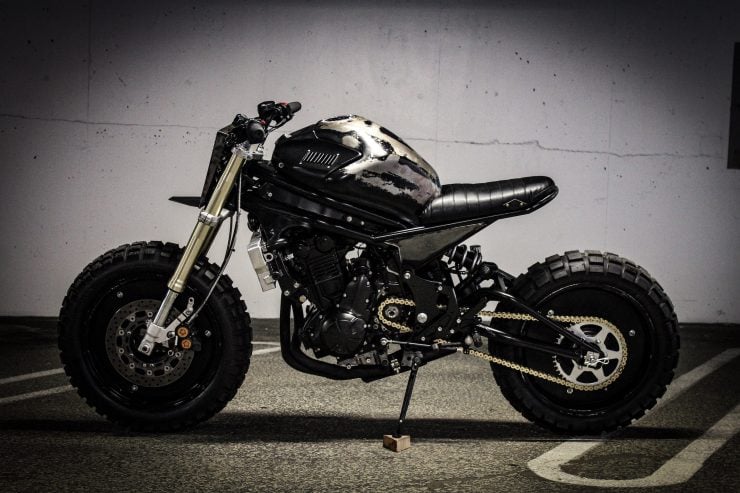 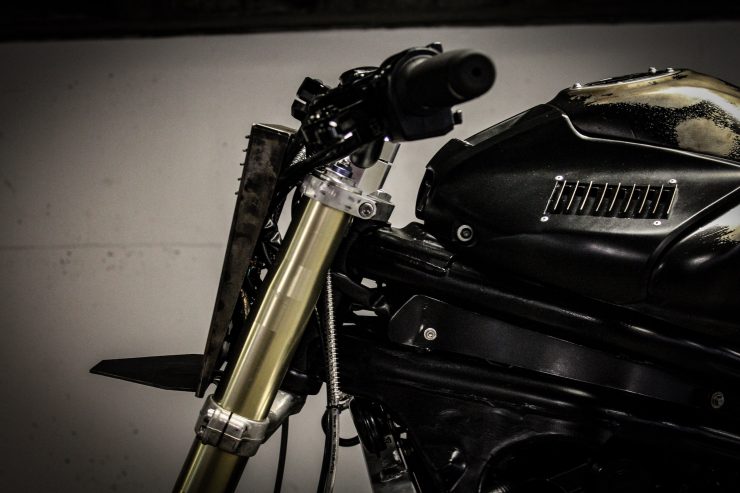 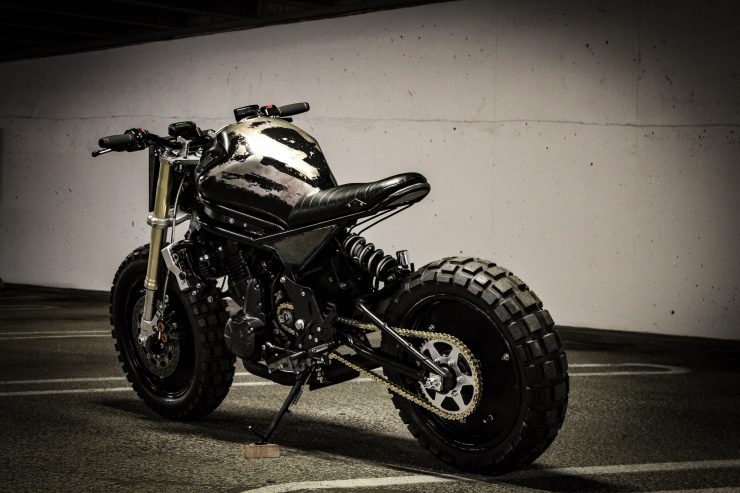 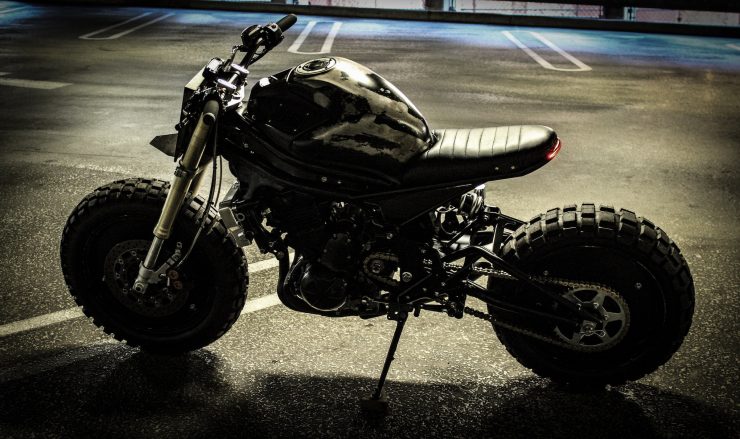 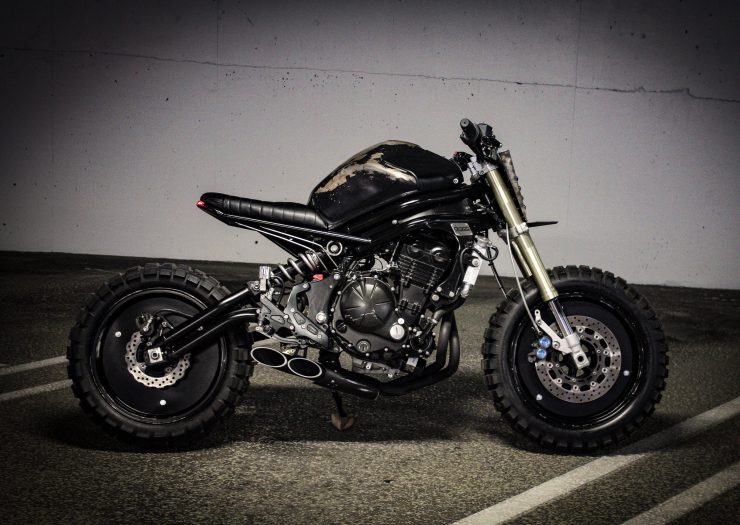 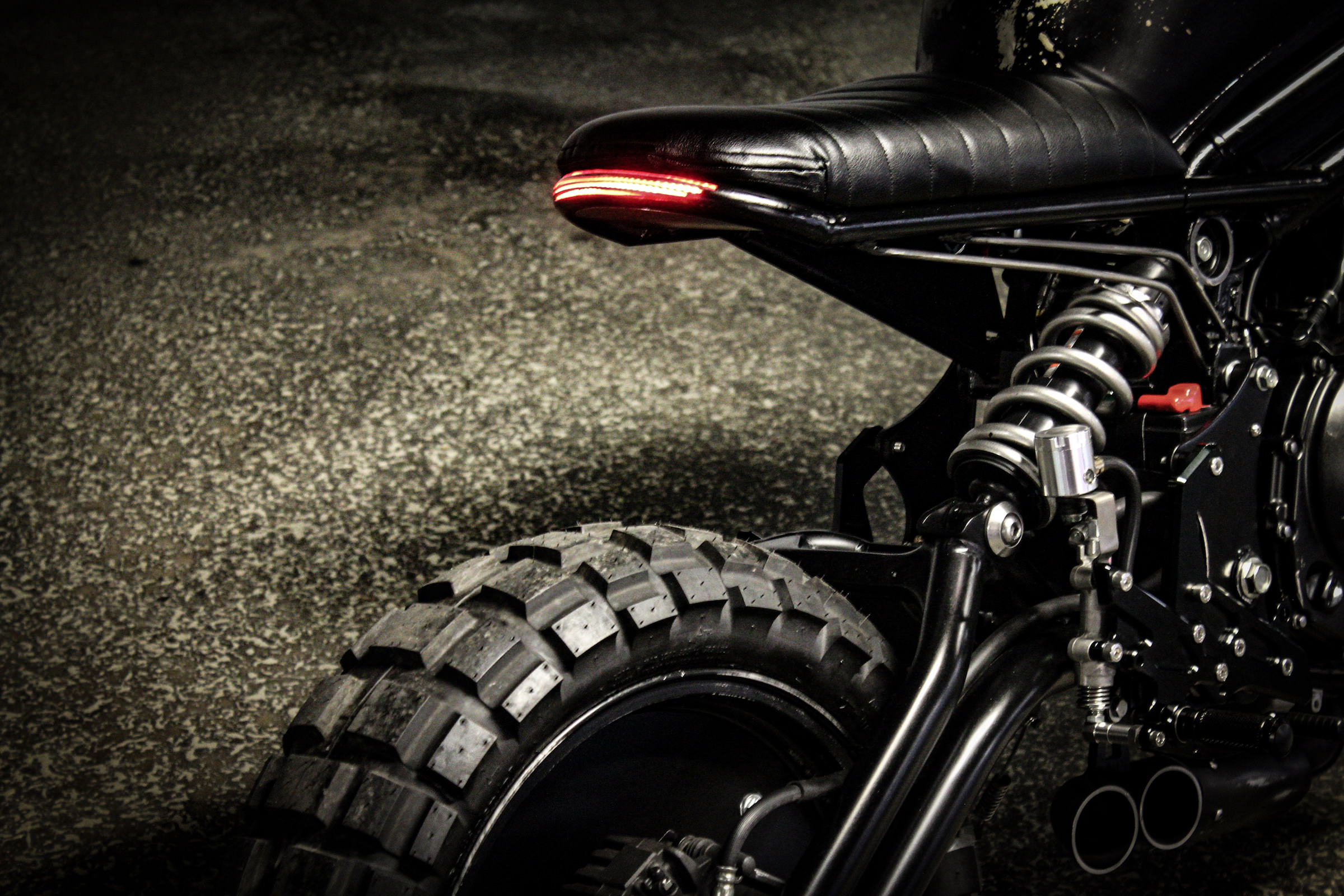