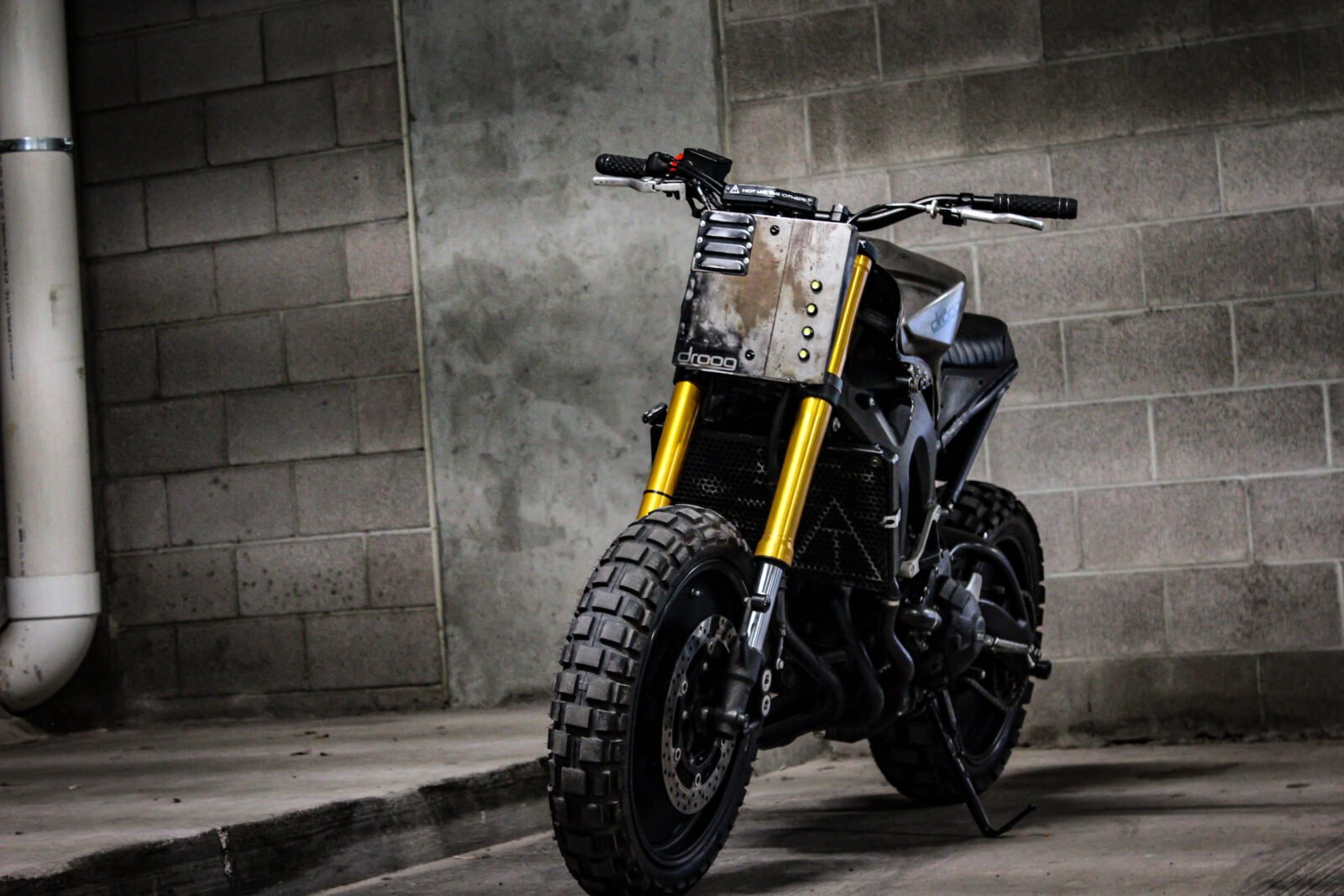 The Yamaha FZ-09 is an inline three cylinder motorcycle designed to compete squarely against the popular Triumph Street Triple. Although multi-cylinder engines with an odd number of cylinders are less common, the three cylinder configuration makes a lot of sense for motorcycle use as it’s smoother running than a parallel twin, and both lighter and narrower than a four cylinder.

The Yamaha FZ-09 product manager Shun Miyazawa and his team started from a blank slate with the new model, and they considered V-twins, parallel twins, triples, and fours. They settled on the triple configuration as the best all-rounder, the final engine has a capacity of 847cc, a compression ratio of 11.5:1, a bore x stroke of 78 mm × 59.1 mm, 115 hp at 10,000 rpm, and a 6-speed gearbox.

Since its release in 2014, the Yamaha FZ-09 has had a widely positive reception from the motoring press, and they’ve become a common sight on streets from LA to Sydney. 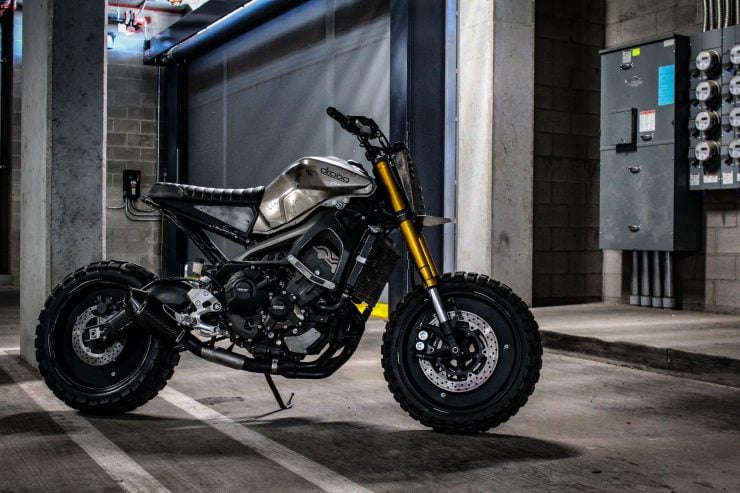 Droog Moto is a highly-regarded custom motorcycle garage based out of Washington State and run by an enterprising young guy named Max Droog – which makes him sound a little like a character from a Douglas Adams novel.

His latest build started as a stock 2014 Yamaha FZ-09 but underneath the original bodywork Max spied that it could be something completely different – a dual sport bike with chunky tires and a completely stripped back post-apocalyptic feel.

The build process started with a teardown to inspect the Yamaha’s frame – it was decided to build a new subframe to accommodate a new seat, to clean up the rear end of the bike significantly. All unnecessary body parts were discarded to reduce weight and clutter, but the original fuel tank was kept in place after the original paint had been removed and replaced with a clear coat.

The battery and electrical system found a new home up under the seat, out of the way of rain, mud, and debris. The original headlight was removed and swapped out for a tracker-style plate incorporating a small beak-fender, with 4 bright LED lights. The stock speedometer was relocated and a Droog Moto Bar was installed, with new grips.

The original wheels were removed and fitted with blacked-out aluminum inserts, then they were fitted with chunky Continental TKC80 tires. A custom 2” lift and updated oil pan were completed to aid in ground clearance when off-road, and a carbon M4 silencer with a re-worked exhaust system were installed, giving the bike a far more aggressive sound that the stock examples.

Max tells us that the completed bike rides like a beefy supermoto, with a comfortable upright riding position and surprisingly good road holding from the TKC80s. The MOTO 3 is currently for sale from Droog Moto, if you’d like to see more or enquire about buying it you can click here to visit the website. 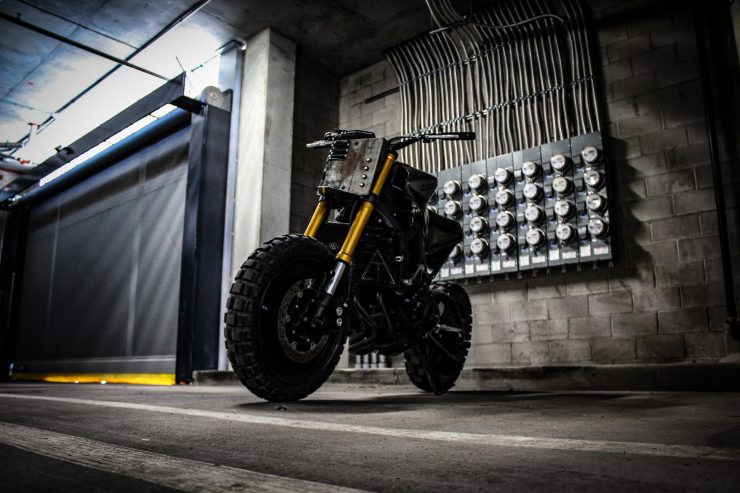 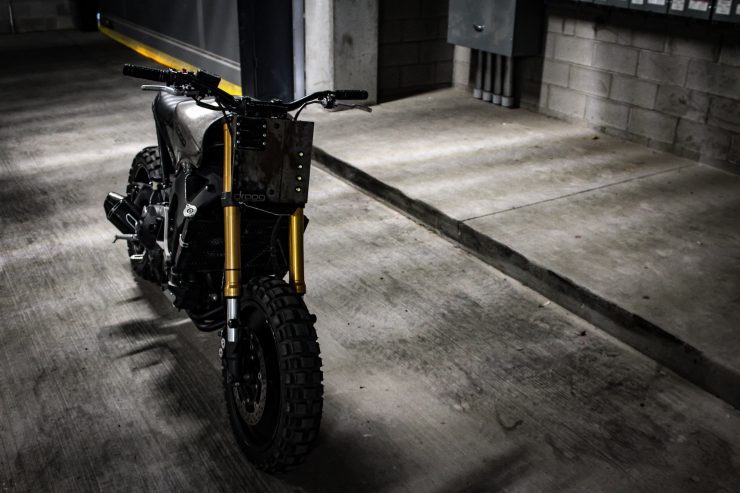 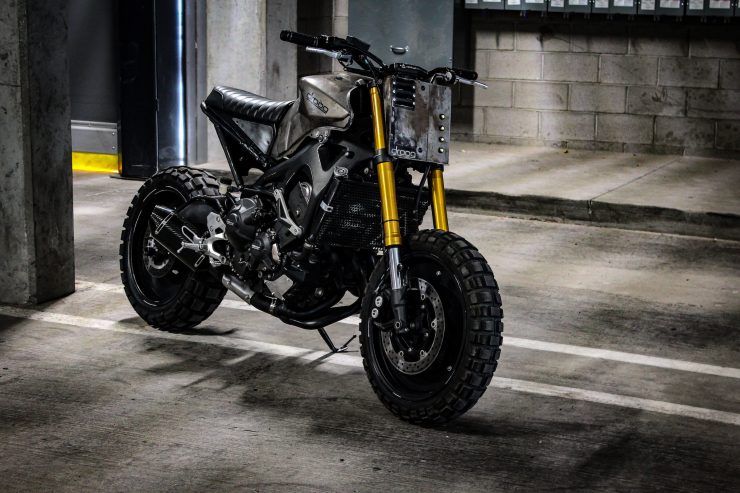 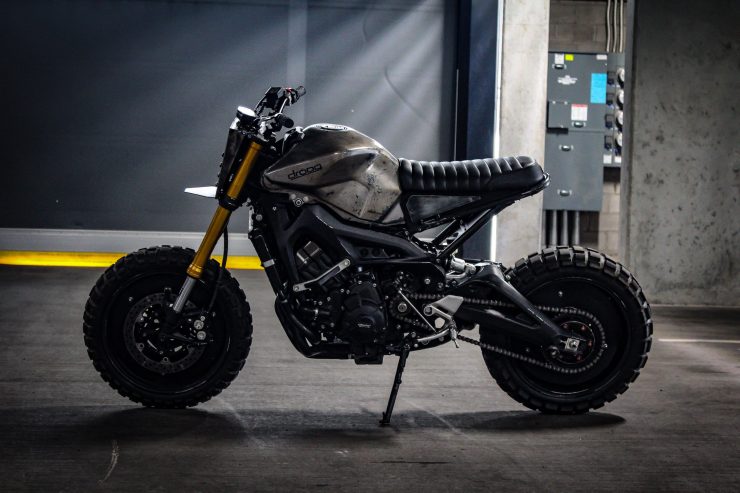 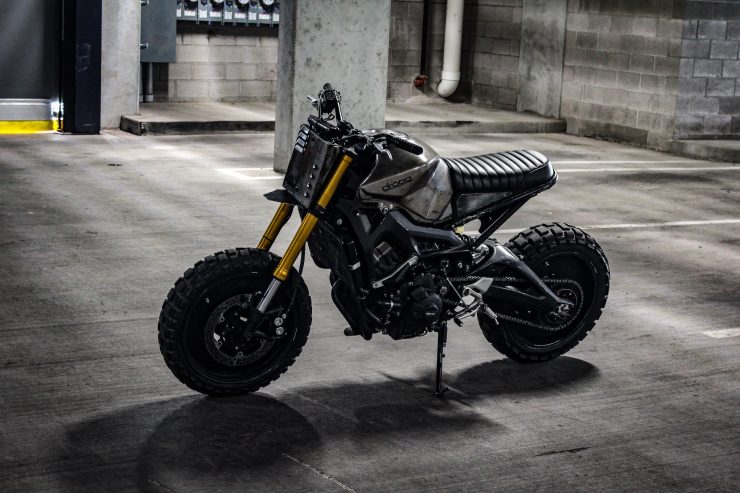 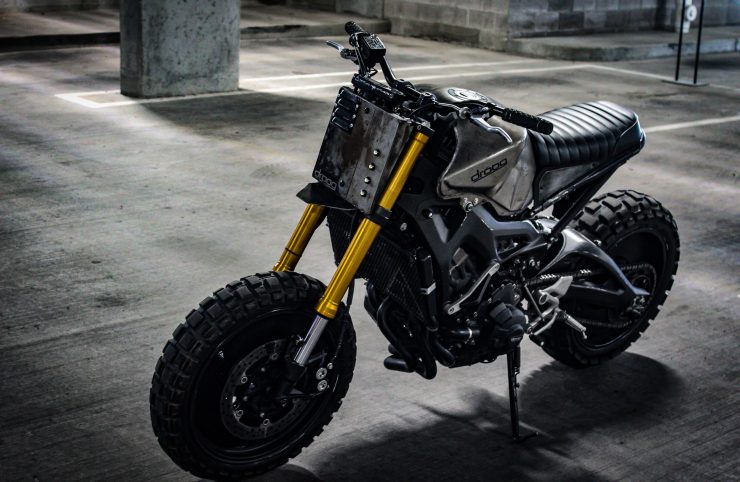 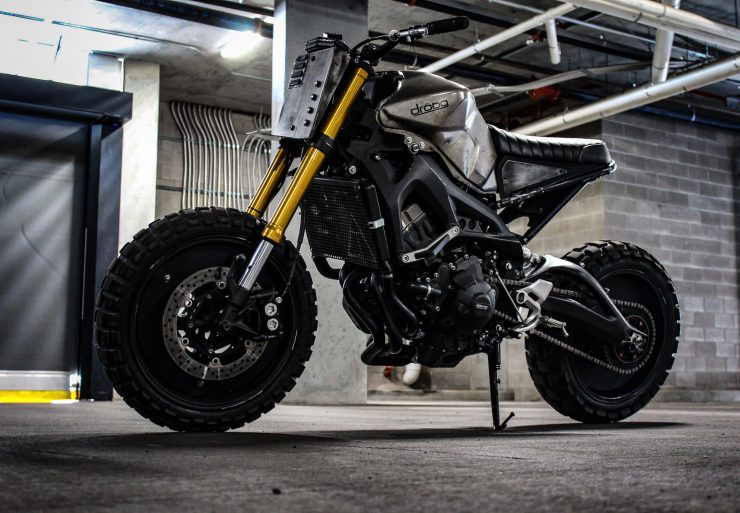 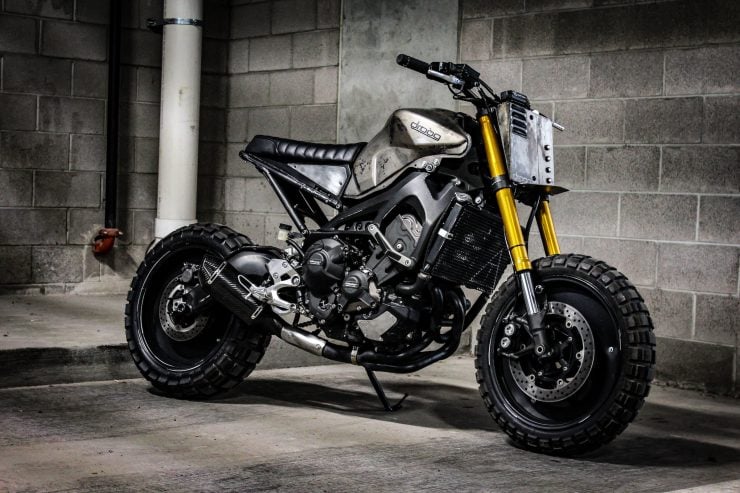 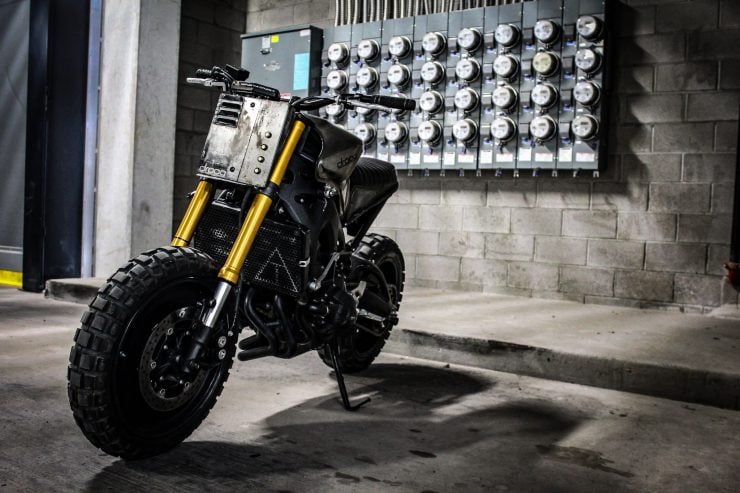 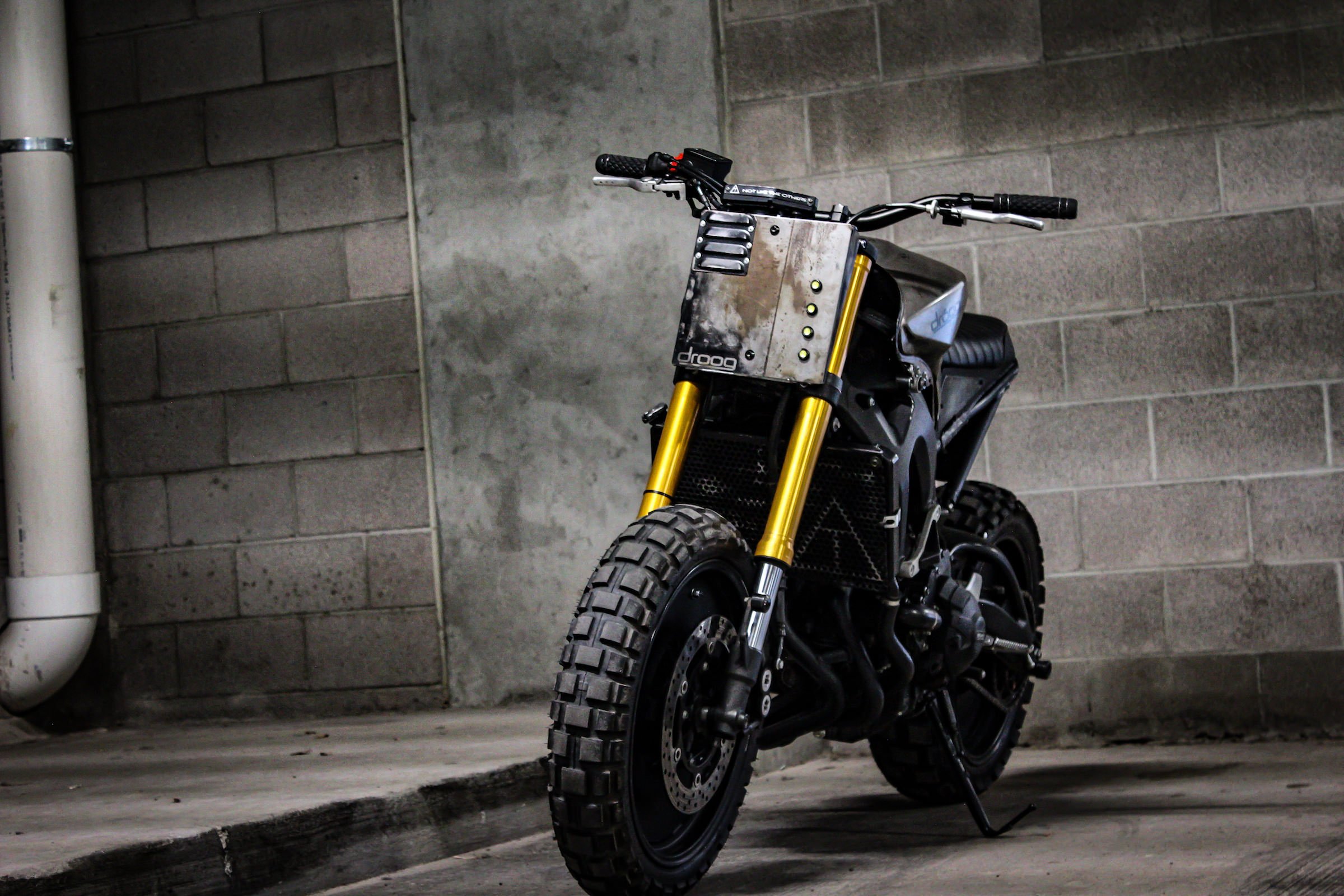