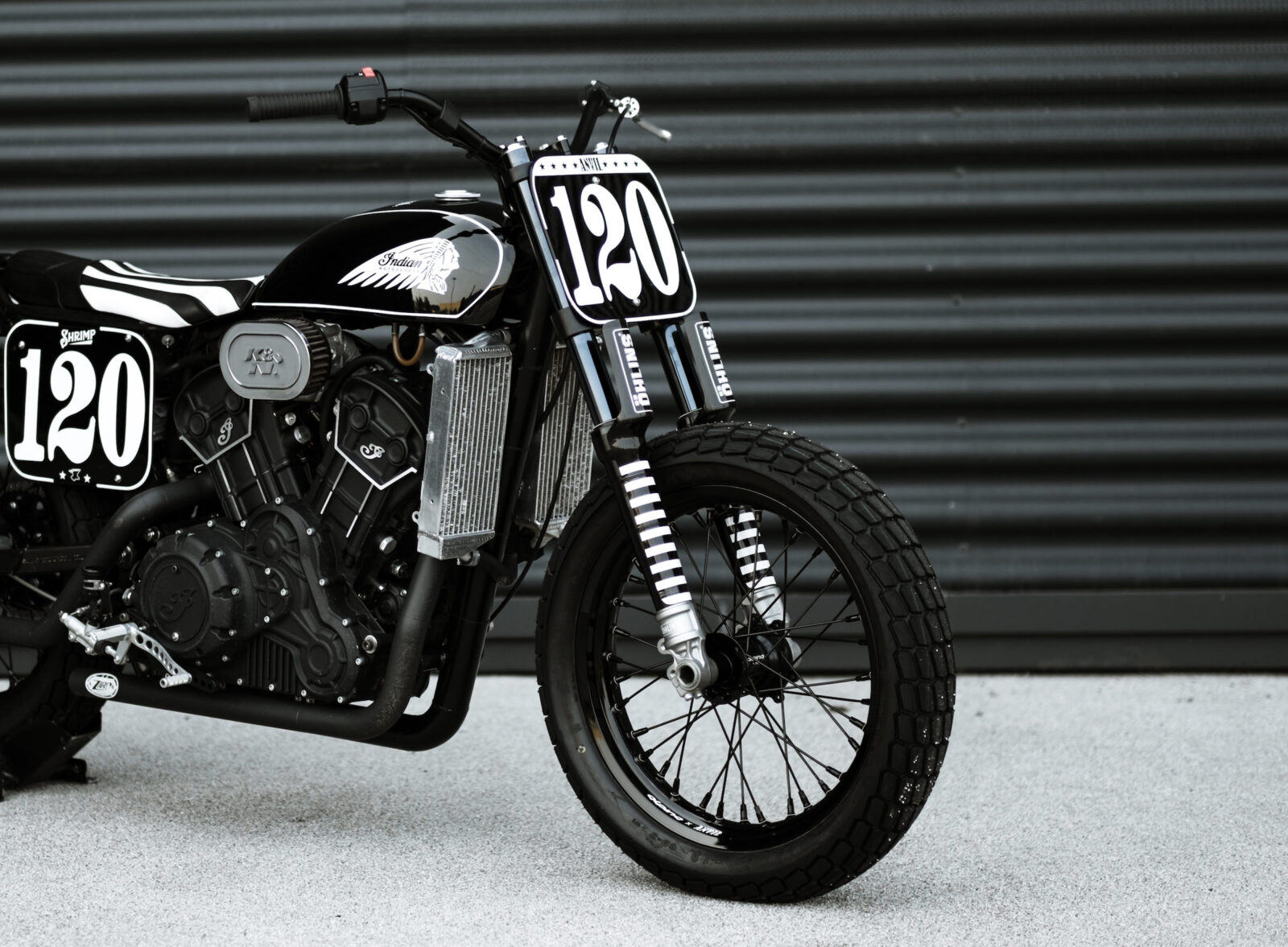 The Indian Shrimp Mille is a new custom build from the talented Italian team at Anvil Motociclette dedicated to one of the biggest superstars of the early years of American board track racing – Albert Burns.

Albert “Shrimp” Burns started his racing career at just 15 piloting a bike he’d bolted together himself, and racing against the best factory-supported professionals in the country. Shrimp caused quite a stir by frequently beating them all and taking the prize money, this proved wildly unpopular amongst the more established riders who managed to get him banned from multiple events.

Burns slowly built up a cult following in the mid-1910s, largely fueled by his underdog status and the fact that he would often crash, fix his bike, and race later the same day. At a race in Marysville, California Shrimp crashed hard on the large oval board track but managed to limp back to the pits where he painstakingly repaired his damaged Indian.

The crowds roared with approval when it was announced he would be taking part in the next race the 5-Mile Final.

Amazingly Shrimp won the race, when he was inspected by a doctor after returning to the pits it was discovered he had ridden in agony with a fractured collarbone and a broken shoulder.

It’s likely that Shrimp’s most famous race took place in 1921 on the new 1.25-mile board track in Beverly Hills, California. He beat the field to take victory in the first race of the day but he crashed heavily at 109 mph in the second race – seriously injuring himself though not breaking any bones.

They rushed him to hospital where his severe abrasions, bruises, and splinters from the wooden track were treated before be was bandaged from his fingertips to his shoulders. It’s not known exactly how he got from the hospital back to the race track, but he appeared bandages-and-all ready for the final race of the day.

He started the race tentatively and was mid-pack for the entire race – up until the final corner which he took high, and came thundering down the banking to overtake the other riders and seal the win, resulting in a deafening roar of approval from the crowds.

Sadly Shrimp Burns would die just a few months later as a result of an accident in Toledo, Ohio when he hit the back of a slower competitor’s bike and was sent into the railings at high-speed. He’s remembered today as one of the first motorsports superstars and he’s arguably the most famous rider from Indian’s formative years.

Anvil is made up of two former childhood motocross riders – Alessandro Phonz Fontanesi and San Marco Filios. In more recent years the two men have made a name for themselves building some of the most eye-catching custom motorcycles in the world, often with strong racing or scrambler influences.

When Anvil Motociclette approached Indian Motorcycles with their idea to build a bike dedicated to the memory of Shrimp Burns it was a no brainer for the Spirit Lake, Iowa based company. They sent a new Indian Scout Sixty over to Alessandro and San Marco, and the two men set to work.

Shrimp raced on both board tracks and dirt tracks in the early years of American motorcycle racing so the Anvil team wanted to build a bike that would capture the spirit of both of these disciplines.

The most famous racing motorcycles of this era where almost all V-twins, so the Scout Sixty was a perfect starting point thanks to its 61 cubic inch V-twin (999cc). 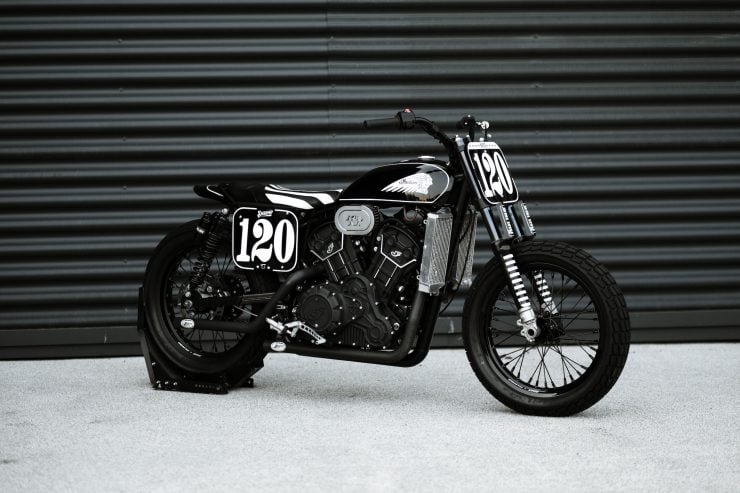 The original rake was changed from 29° to 25° and the forks were replaced with Öhlins units to match the rear shocks and offer improved handling. The throttle body located between the two cylinders was moved to an external position on the righthand side and fitted with a high-flow K&N filter, and a custom exhaust was handmade by Zard, inspired by the exhausts used on flat track bikes back in the 1930s.

A new higher-performing Brembo brake was fitted in the rear to help offset the loss of the front disc brake – removed as they’re weren’t typically used on flat track or board track motorcycles. The original radiator was removed for a pair of aluminum racing radiators, accompanied by a handmade aluminum fuel tank, fender, and racing plates.

There’s little doubt Shrimp Burns himself would have had no trouble at all throwing a leg over this build and getting the crowd on its feet. 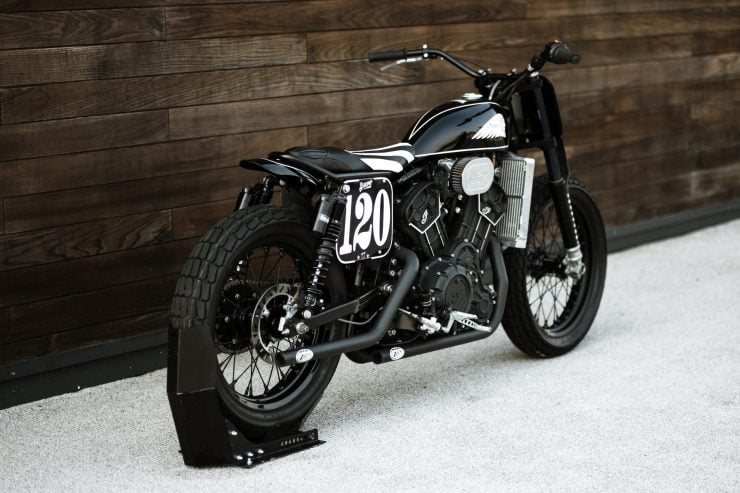 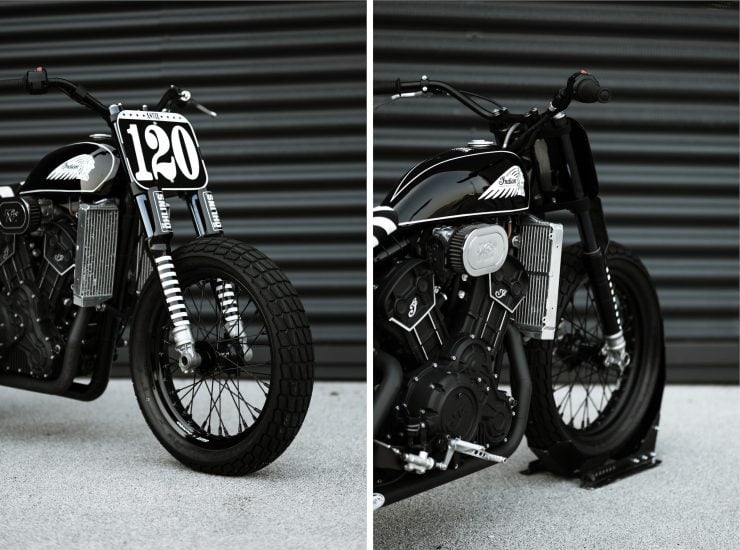 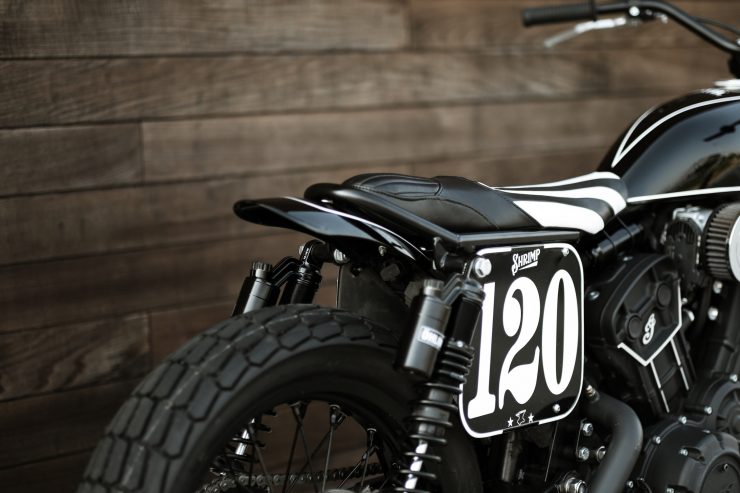 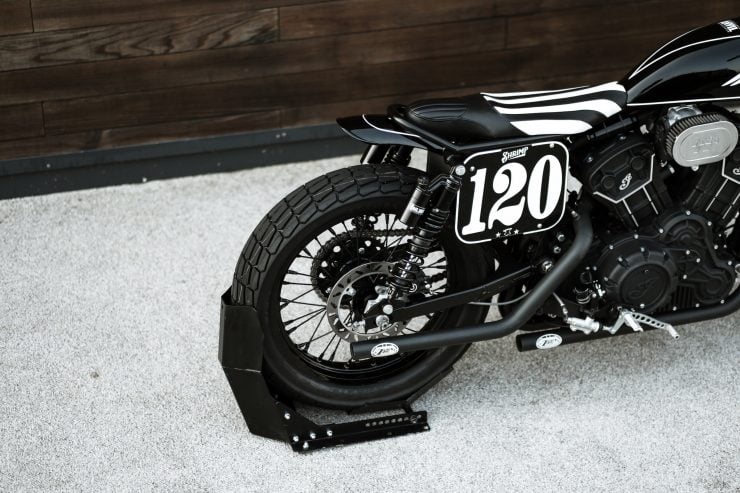 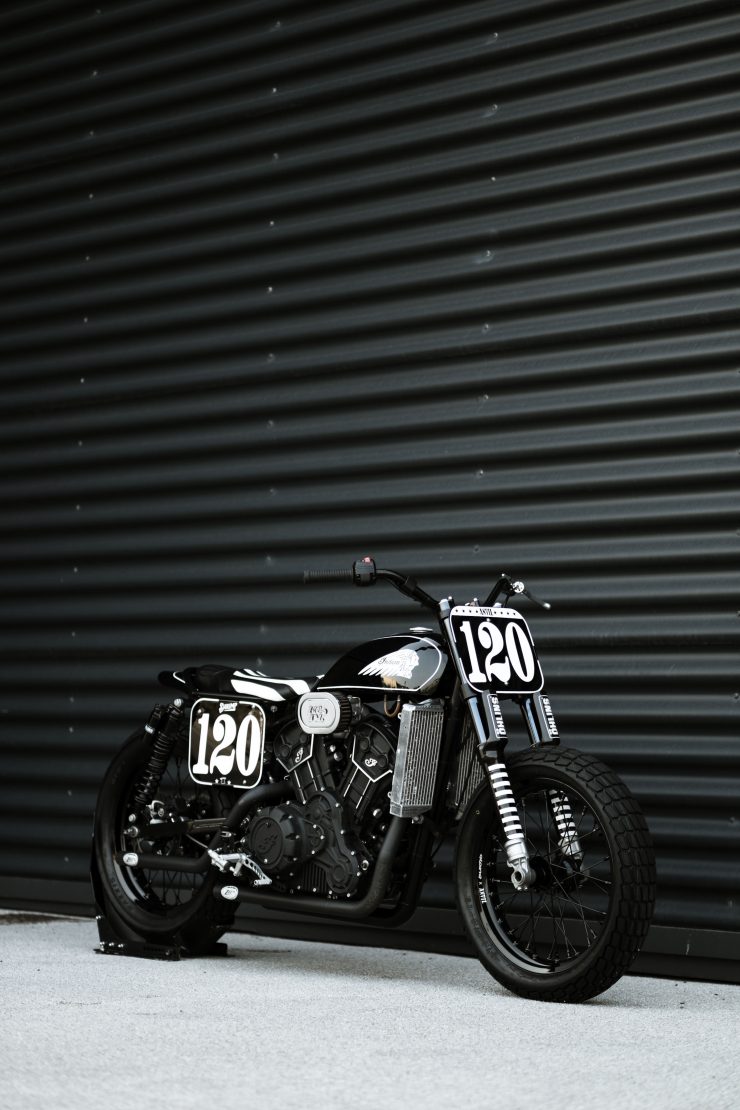 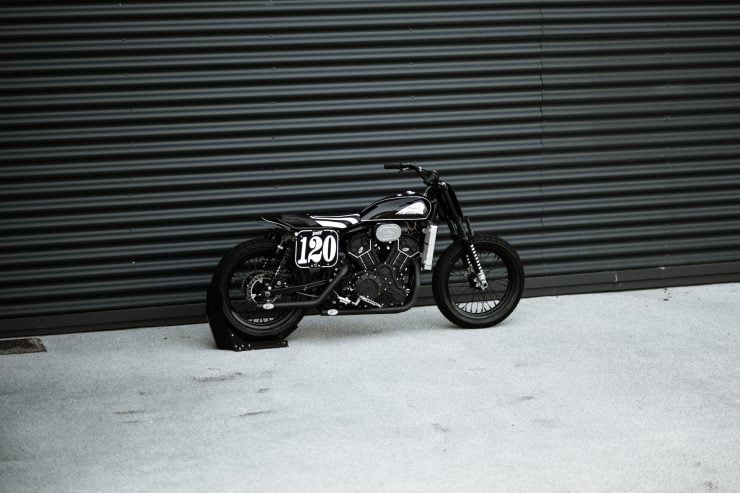 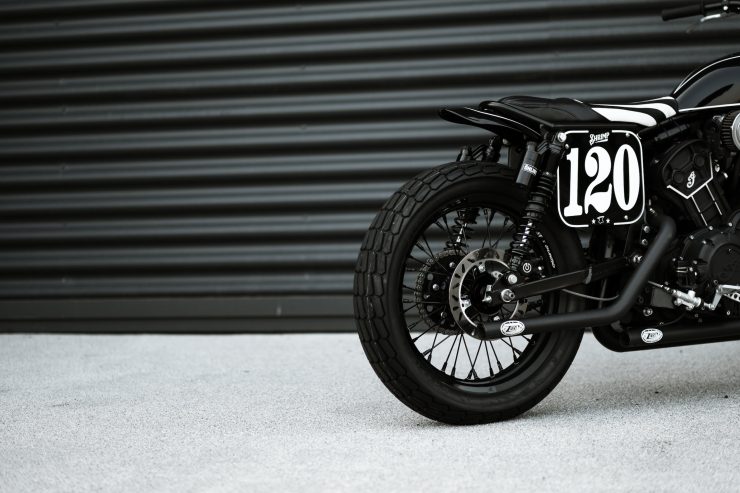 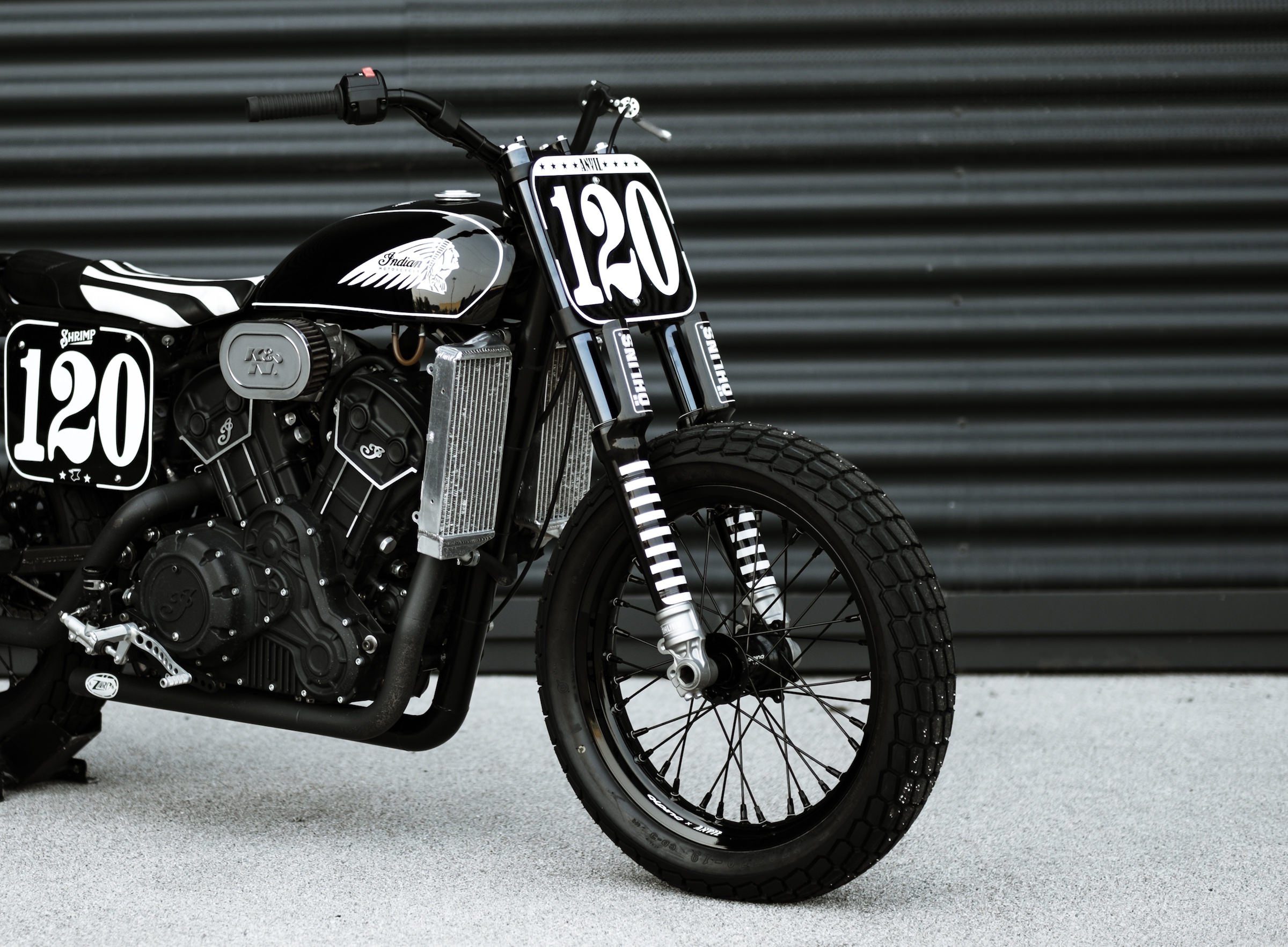