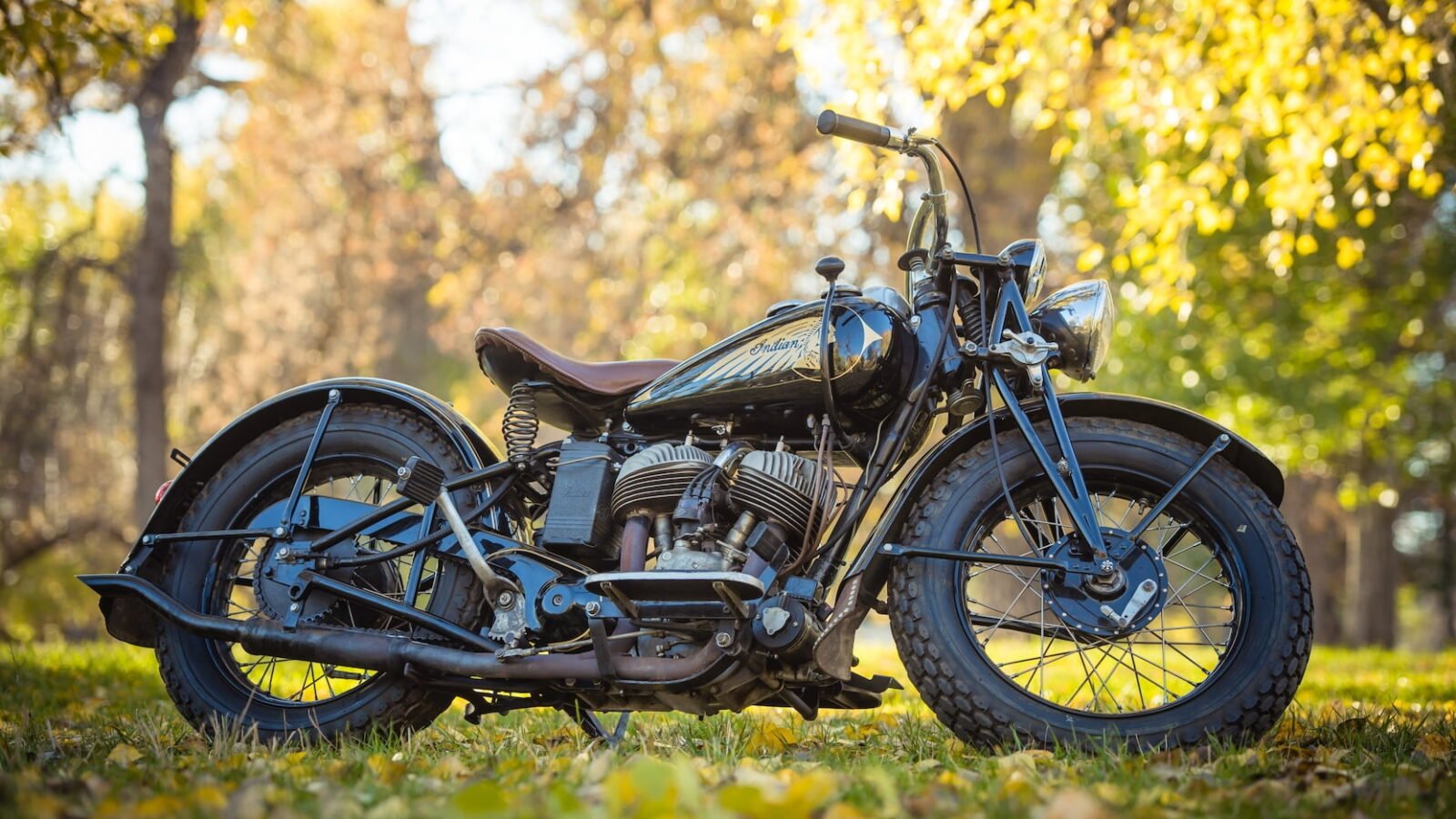 The Indian Sport Scout was designed and built to regain the crown that had been lost when the Springfield, Massachusetts-based company discontinued their ever-popular Scout 101 in 1931.

The story of the Indian Scout 101 is a two-wheeled example of the old adage if it ain’t broke, don’t fix it. The model was popular across America and around the world for its handling, and it was used extensively in flat track racing, hillclimbing, circuit racing, beach racing, and good old American street racing.

The dark cloud of the Great Depression had descended over the United States in 1929, and by 1931 Indian was feeling the pinch. Sales were slow, market sentiment was abysmal, and there was no clear sign of an economic recovery in sight.

The solution was to minimize the number of unique parts being manufactured to reduce costs. A new Scout was developed called the Standard Scout, it used the same heavy frame as the larger Indian Chief (and Indian Four), and performance suffered significantly as a result.

A Return to Form – The Introduction of the Indian Sport Scout

Sales of the new model were slow, and within two years Indian had developed a new lightweight frame for a new model to be called the Sport Scout. Improved girder forks were fitted, an improved Schebler carburetor was installed along with alloy cylinder heads. 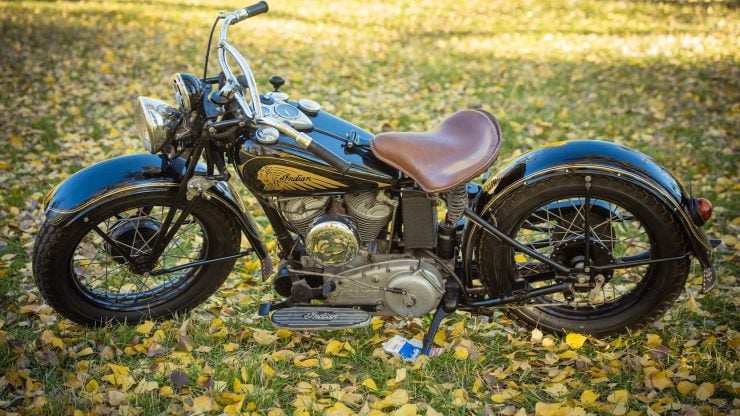 Although this bike weighed slightly more than the Scout 101 at 385 lbs vs 370 lbs, it was more powerful, and offered better handling. Motorcycle racing legend Ed Kretz piloted an Indian Sport Scout to a win at the first ever Daytona 200 – back when racing took place on the traditional 3.2 mile Daytona Beach Road Course.

This win was a major victory for Indian, and it greatly helped move Sport Scouts off showroom floors across the country. Countless other smaller victories would be taken by the model across the USA and as far afield as New Zealand, Australia, and South Africa before WWII caused a shift from civilian to military production.

1940 was an important year for the Indian Sport Scout, the model gained full Indian-style fenders for the first time, as well as a slightly lower seat height, and an increased fork rake.

The example you see here is equipped with a right-side hand shifter feeding into the 3-speed gearbox, with its original braced handlebars, sweeping Indian fenders, and expansive sprung leather saddle.

It features a period-correct horn above its headlight, as well as large comfortable foot boards on either side. The speedometer is mounted in the top of the fuel tank, and as you would expect from a bike built in 1940, there are no indicators – just a headlight and brake light.

We’re seeing an increasing level of interest in classic motorcycles like this, as modern motorcycles lean more towards technologies like traction control, ABS, stability control, and a slew of other modern whizzbangs that are doubtless safer, but also take a little of the direct connection away.

The bike benefits from a recent mechanical restoration, and it’s listed as being in all-original condition. The frame number is 6402711, and Mecum explains that it runs and rides well, if you’d like to read more about it or register to bid you can click here to visit the listing. 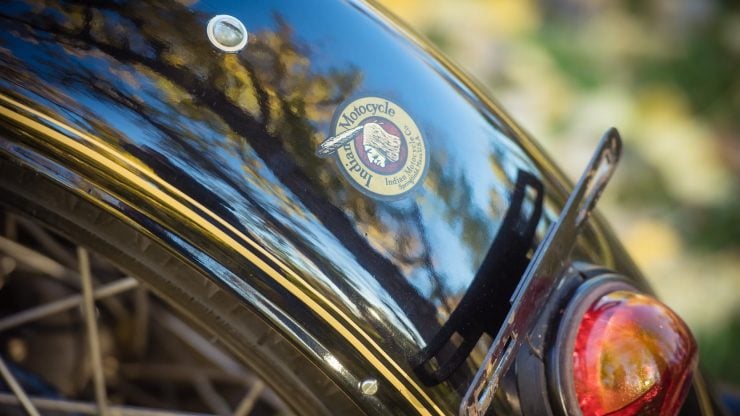 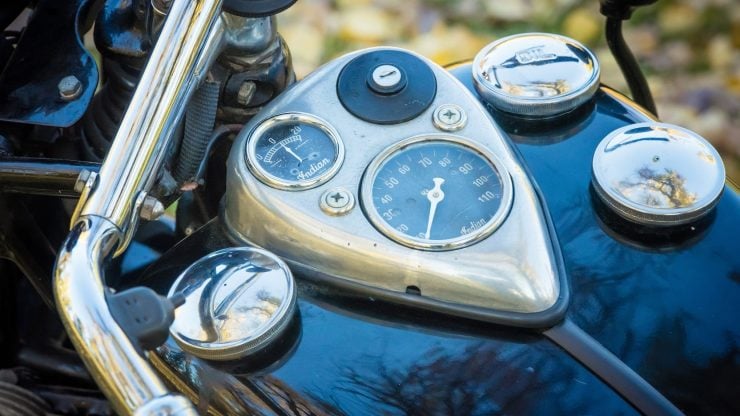 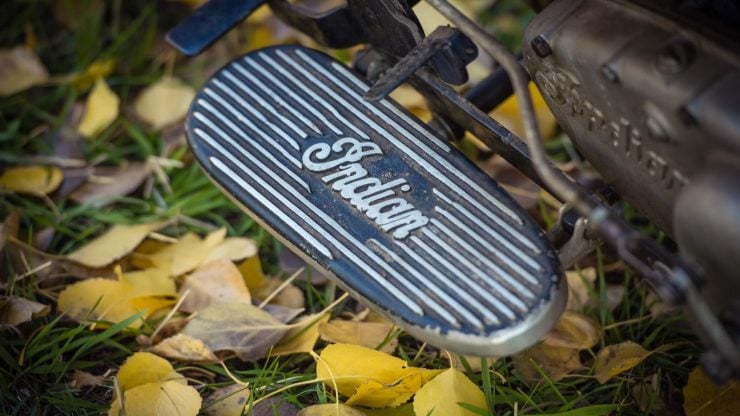 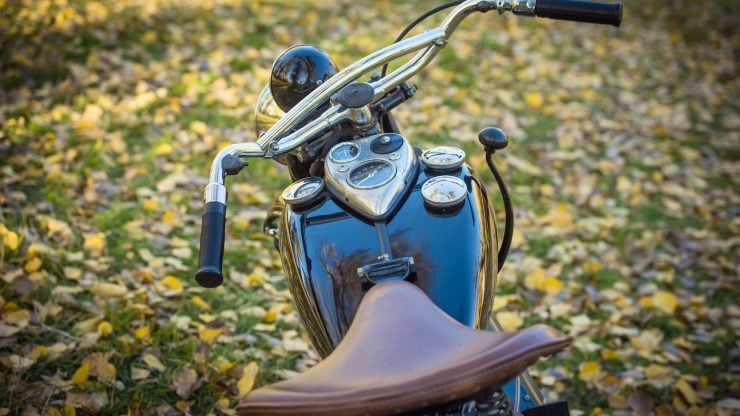 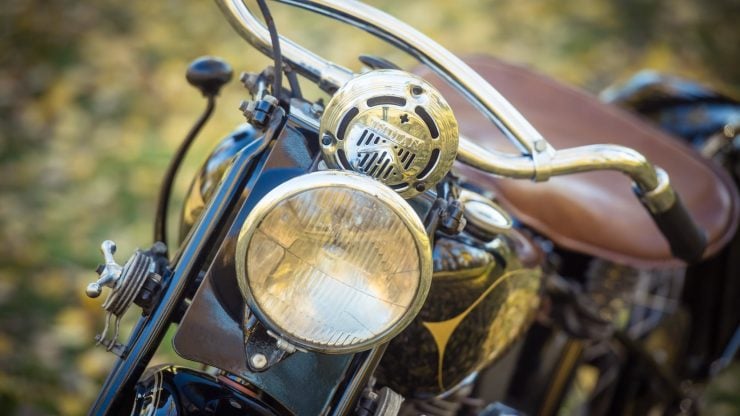 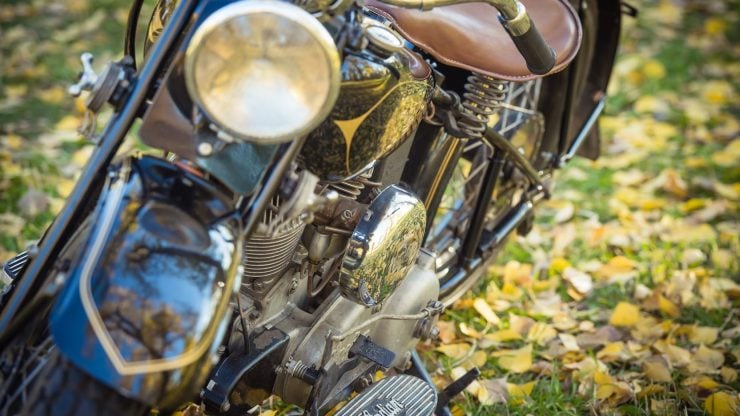 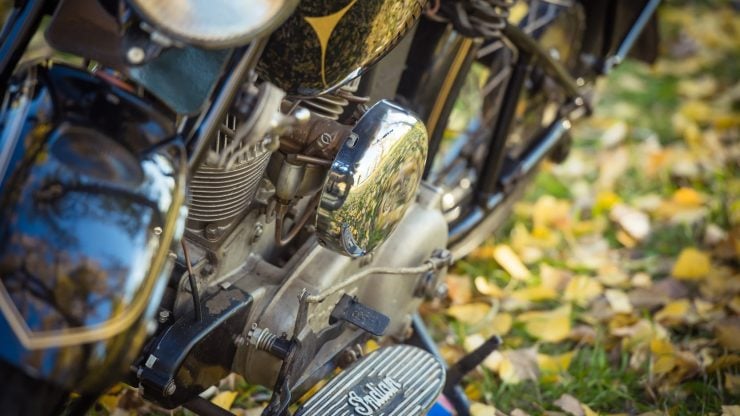 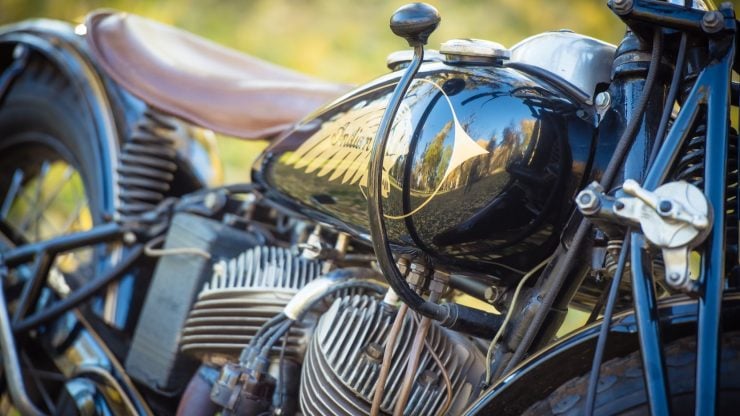 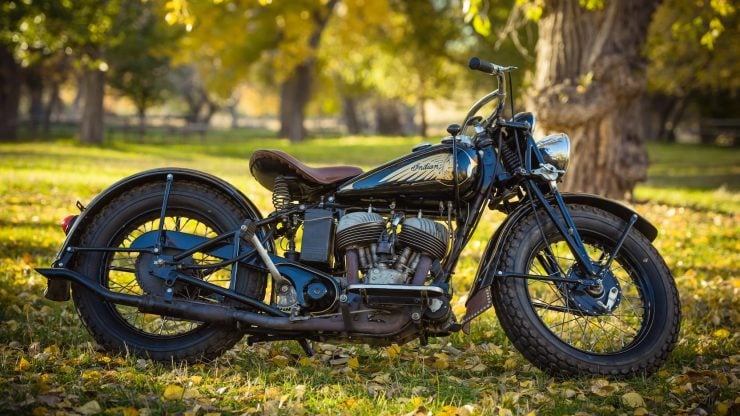 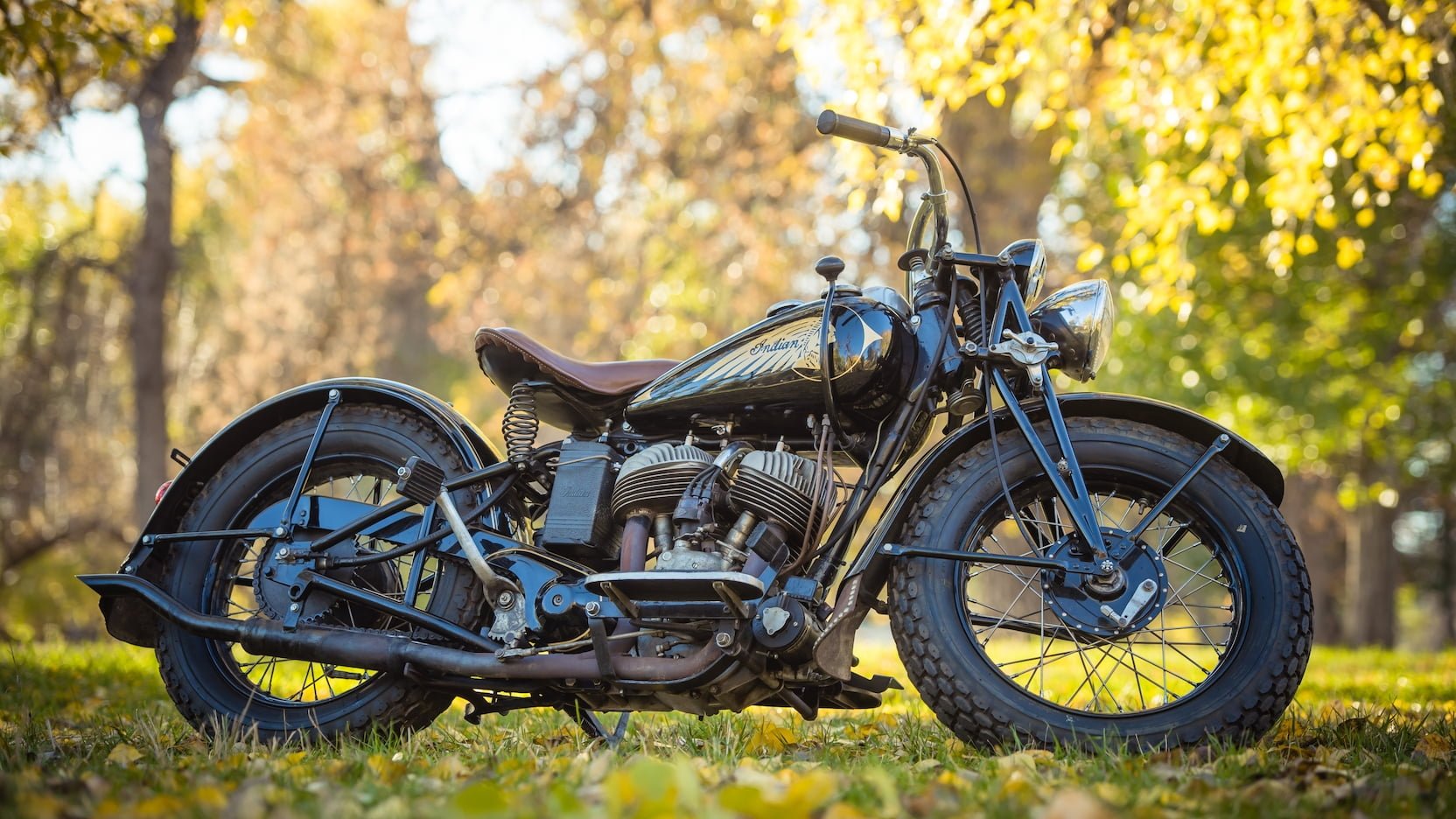