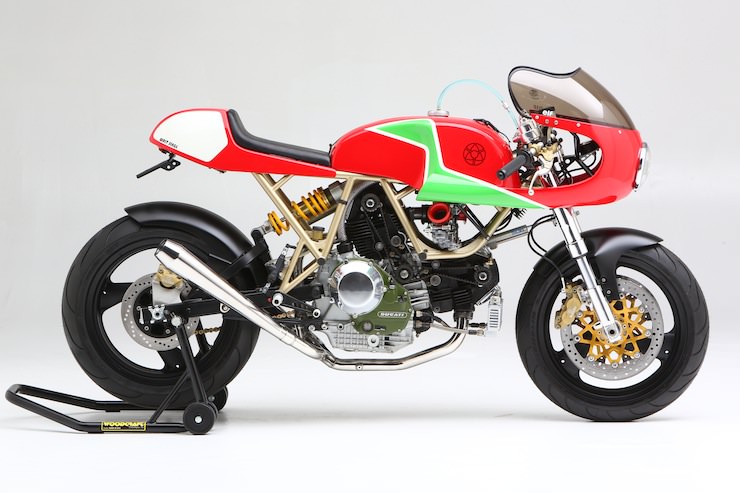 Walt Siegl is a highly influential motorcycle builder based in New Hampshire – he’s been based in the Granite State since 2007 and he’s been directly responsible for some of the most technologically advanced custom motorcycles anywhere in the USA, or anywhere else for that matter.

The bike pictured here is the Walt Siegl Ducati Leggero, he’s been working on producing a limited production run on the Leggero series of motorcycles and this particular model is his personal bike. Walt says that he’s looking forward to getting the bike out onto the track – he started racing motorcycles at the age of 18 and has been going strong ever since, so this new bike can expect to pick up some fairly significant miles on the odometer.

Each Leggero from the production run will be handmade to customer specifications but the essential elements like the frame, engine, tank, bodywork and suspension are all hand-made units built by Walt. This allows the costs to be brought down and makes owning a Siegl bike a realistic aspiration for people like you and me, who perhaps can’t afford a full-on, ground-up custom. 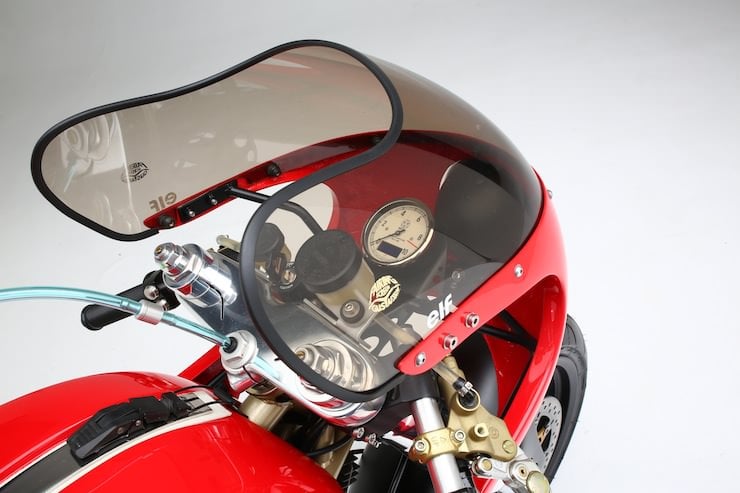 The Ducati Leggero is built around an air-cooled Ducati 2 valve 900cc v-twin, with 39mm Keihin carburettors, the frame is a CAD designed chromium-molybendium unit that weighs in at just 19lbs and the tank/bodywork are made from hand-laid urethane. Suspension is provided by Showa up front and Öhlins at the rear giving the bike some serious track potential for those wanting to challenge Walt out on the asphalt.

If you’d like to order your own Leggero you can click the link here to visit Walt’s site and if you’d like to see more from Siegl you can view the first Leggero here, the Riviera Ducati SS here, the MotoBee here and the WS Sport Classic here.

I’ve decided to include Walt’s description of the technical details on this bike below, usually I’d rewrite this into bite sized chunks however there’s just so much technical data there that I don’t want to risk watering it down. 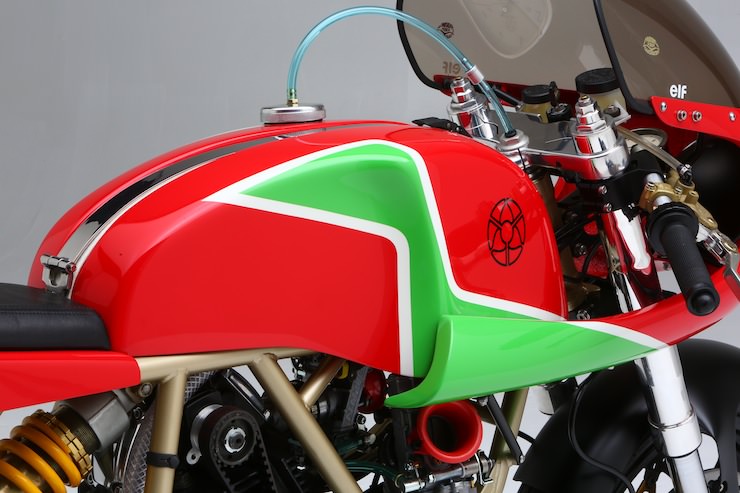 The donor bike for this Leggero is a 1992 900 Ducati Supersport, The crank case and alternator cover showed some weak spots upon closer inspection, so I opted to use a set cases from a 2002 900 monster. The short crank from the early donor bike required some machining and spacing on the later model Supersport alternator cover. I also used a later model oil pump with more capacity compared to the original 1992 pump, but because of clearance issues, the engine cover and oil pump had to be machined.

The original fly wheel was shaved on the lathe, and lost half of its weight. This procedure allows the revs to build much quicker, gives the engine a stable idle, and allows the bike to be turned faster into corners, since the inertia of the stock fly wheel is gone.

The chassis for the Leggero series is designed by me, and build with air craft steel chrome moly tubing, and weighs 19 pounds. Geometry is a combination of Ducati 916 and Ducati Super Sport.

Fairing, tank and tailsection are also Walt Siegl products, and made in this case of urethane. Customers can order this combo in carbon fiber, painted, or just clear coated as well. I also offer a Kevlar/carbon version.

I have always admired NCR machines, so the graphics are a contemporary nod to the famous Hailwood bike. I wanted to underscore the use of modern components wrapped in classic design, by using bright colors that are usually found on todays race bikes.

This bike, like all the other Leggero’s as well, is tremendously agile and superfun to ride and easy to live with.
I am in the process of completing a full carbon fiber version for a overseas customer right now with a fuel injection engine, so you don’t even have to reach for the chokes anymore, when the motor is cold. 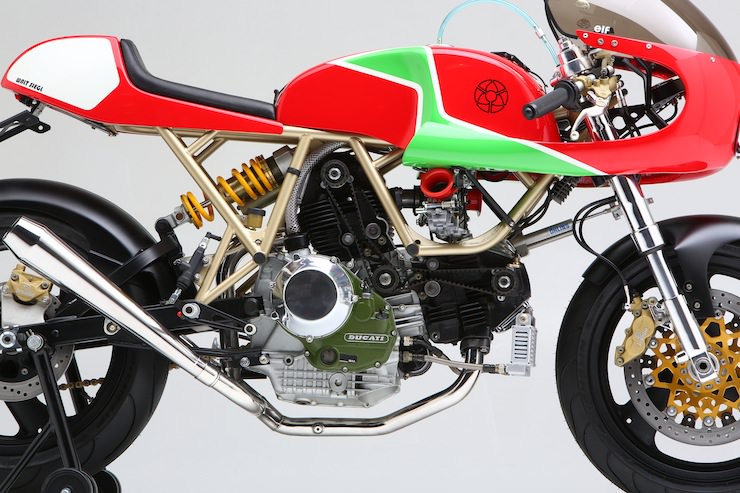 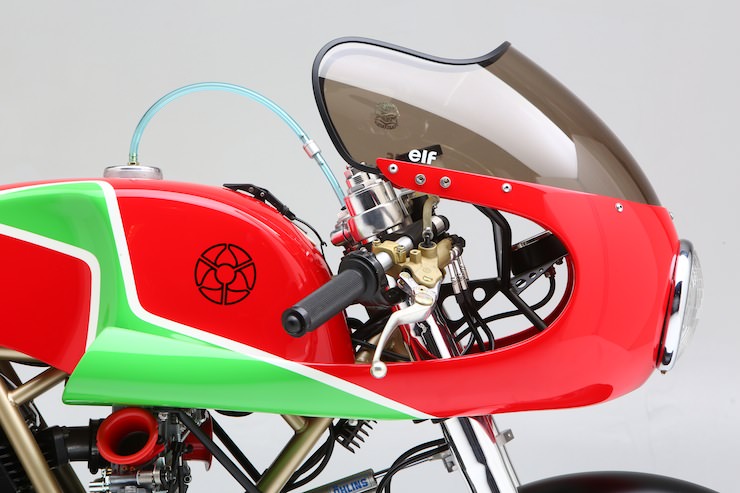 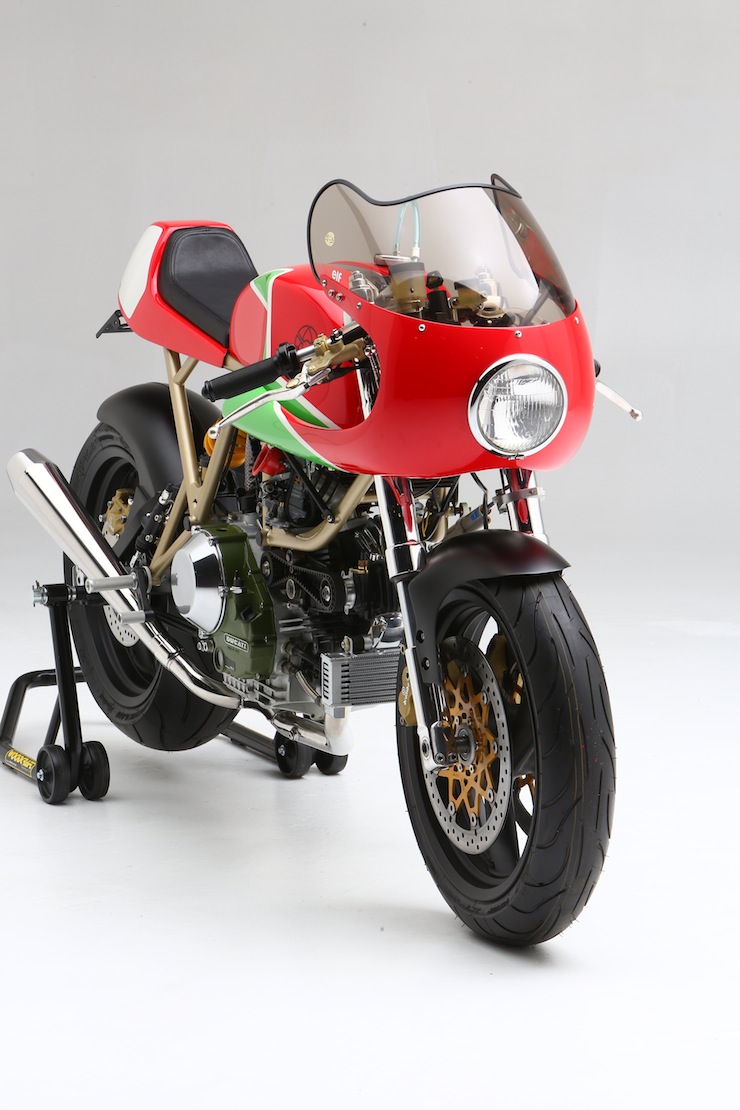 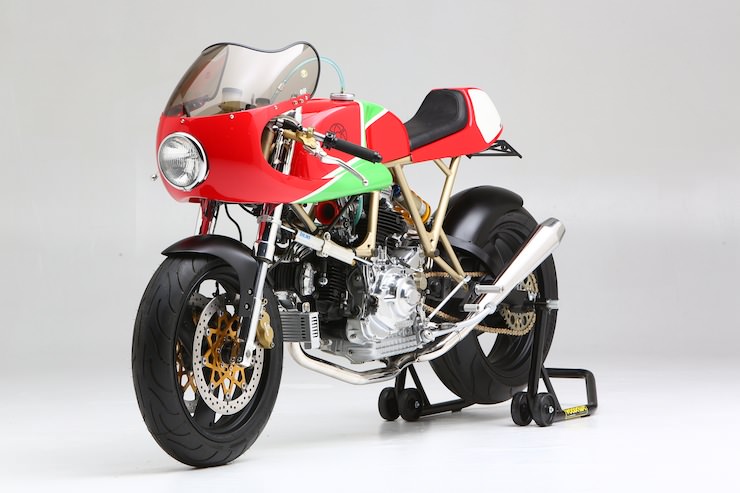 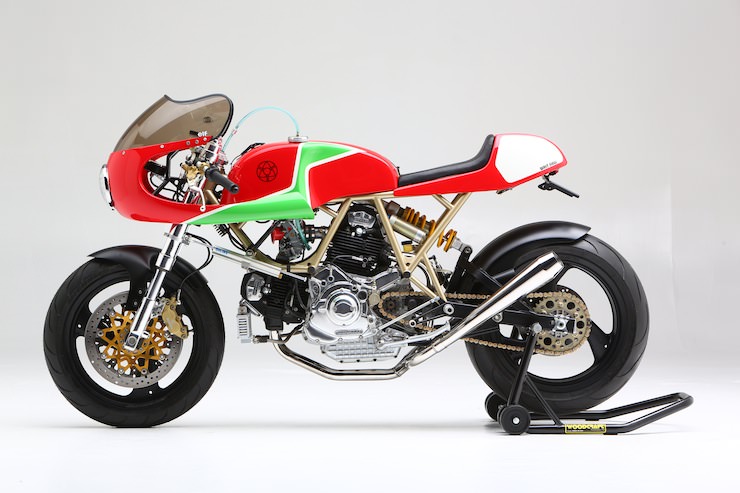 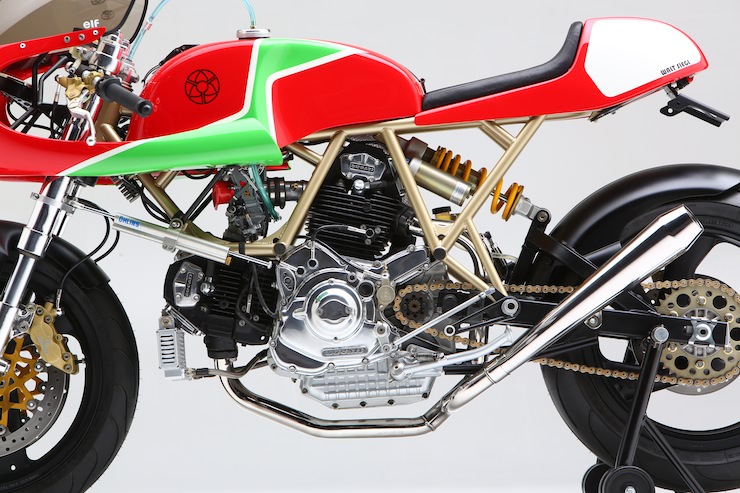 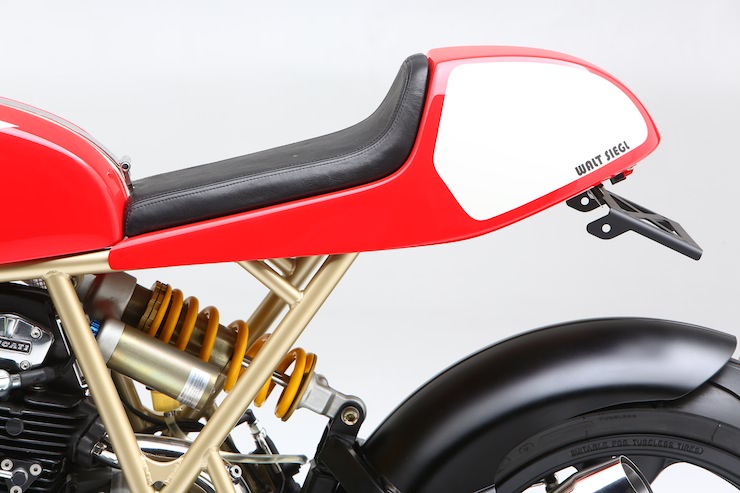 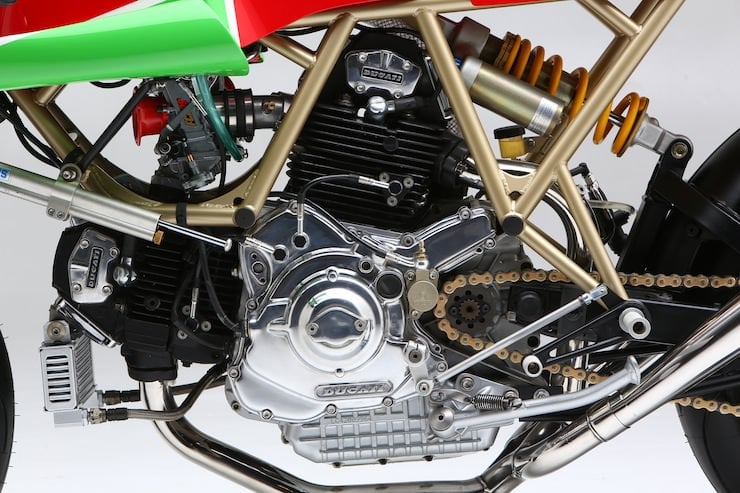 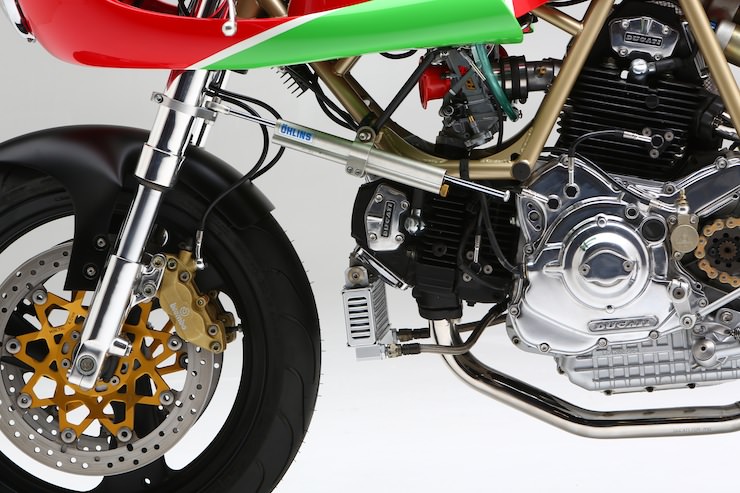 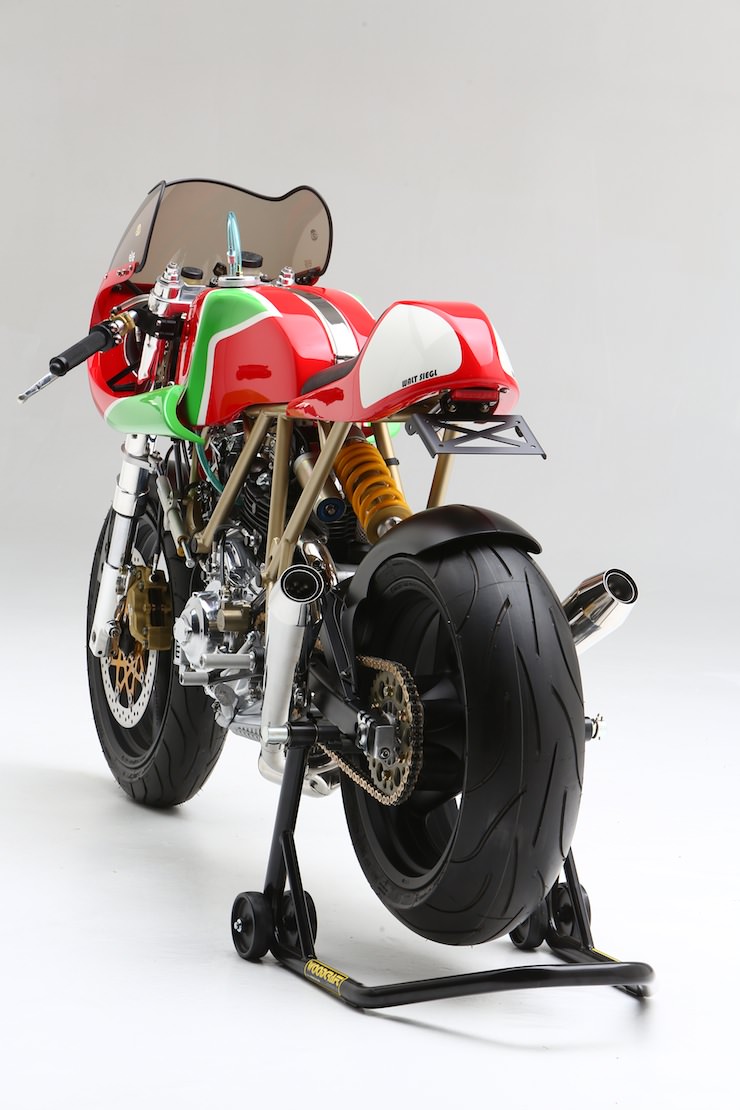 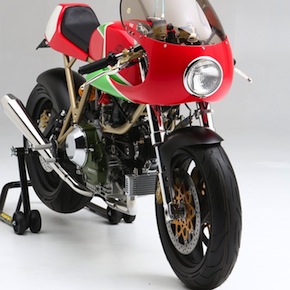