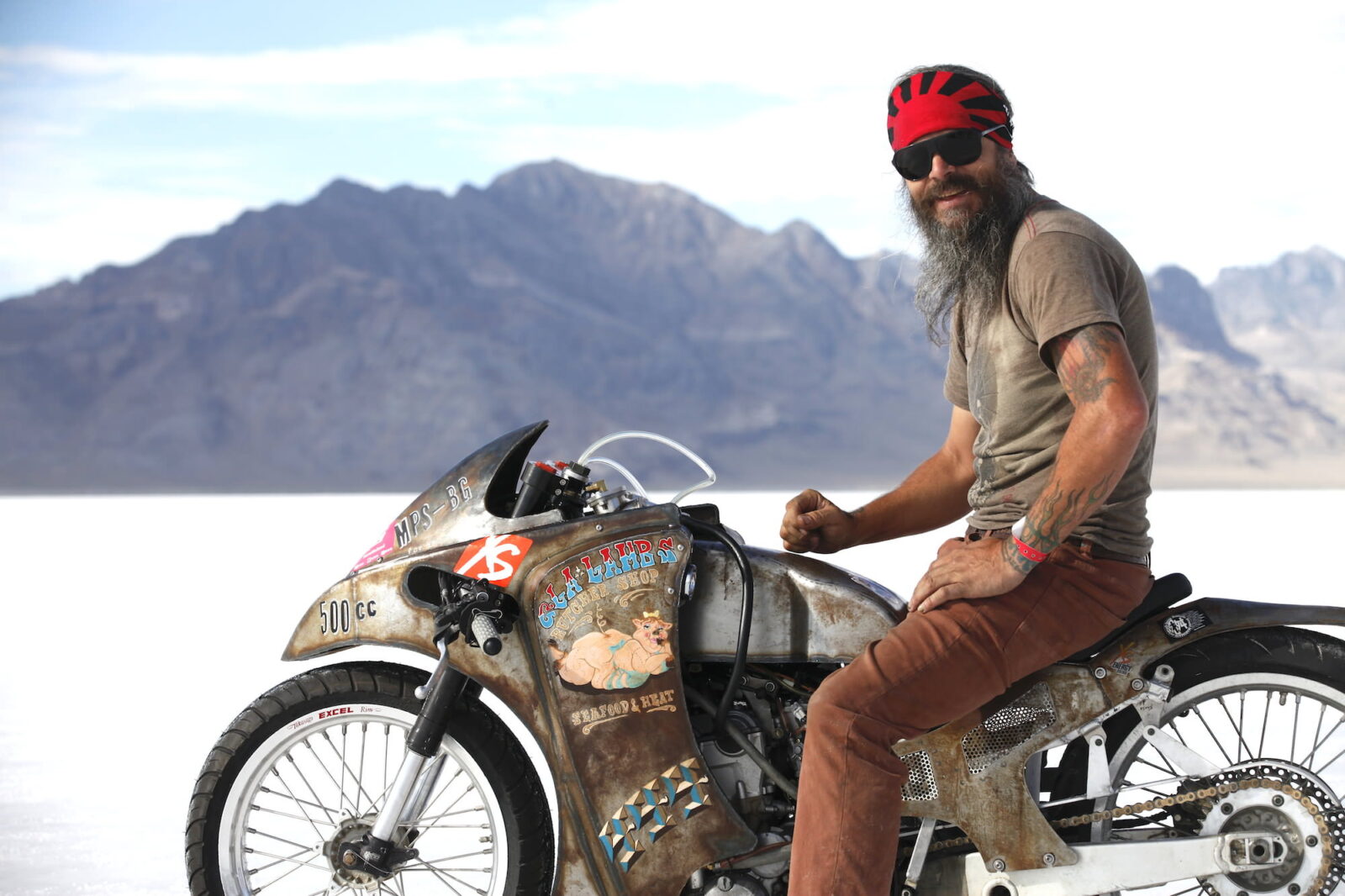 Madness takes many forms. For some it’s a slow descent into oblivion, characterised by increasingly erratic behaviour, illogical obsessions and a fondness for incoherent mumblings about the Illuminati. For others it’s a project to handbuild a turbo-charged salt flat racer from the remnants of a 450cc dirt bike.

If I ever lose my wits I can only hope that I’m afflicted with that latter form of madness.

The project began in February 2013 when a friend of Carl Bjorklund approached him with a 2004 Yamaha WR450F enduro that he wanted converted into a street-legal supermoto. The project sounded simple enough, Washington state law allows off road bikes to be legalised so long as they’re fitted with lights and a horn, so with this in mind Carl and the team at Super Rat Motorcycles set to work.

As it happens, Carl’s shop neighbour is a man named Tim Clossey, Tim was loosely described as a chemical engineer who’s smarter than 10 men – when not engineering chemicals, Tim would daydream about going to the Bonneville salt flats and breaking world records.

As the Super Rat Yamaha WR450F build began, Tim would come over and offer help, before long the team had forgotten their original directive and decided to build a Bonneville streamliner – then take her out to the salt and see how fast she’d go. At some point early in the project, the team decided that turning a dirt bike into a streamliner wasn’t quite challenging enough, so over some beer it was unanimously decided to bolt an old turbo charger onto the carburettor.

Anyone who’s ever tried to bolt a turbo onto an engine that wasn’t designed for it will quickly attest that it’s an undertaking only slightly less ambitious that creating a cold fusion reactor using nothing but a polystyrene coffee cup, jello and a slinky. 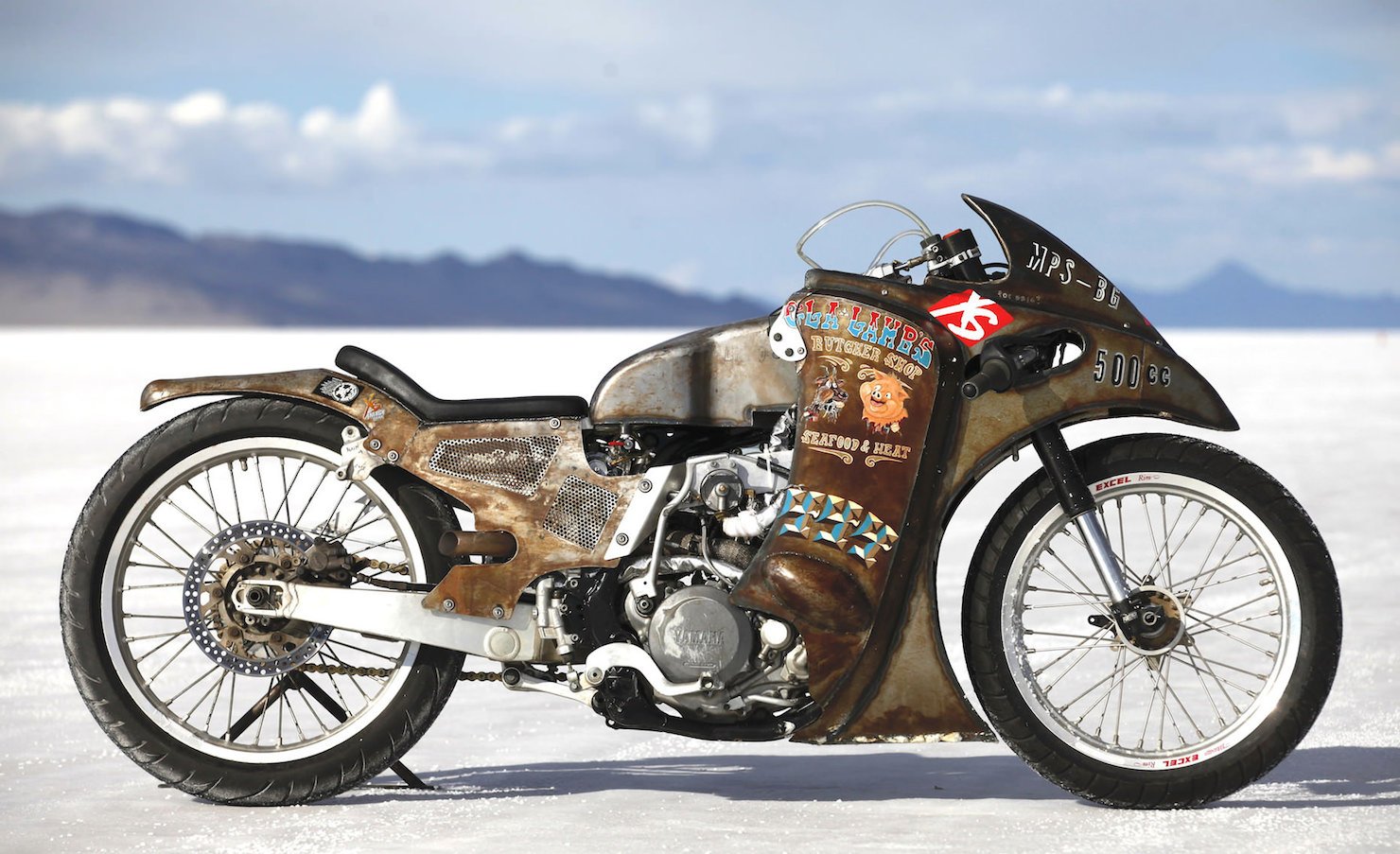 A bush league dyno was built in the corner of the garage to test the new forced induction engine and tune the carburettor, while this was being done Car set about creating the eye-catching fairing. He used cardpaper, scissors, masking tape and paste to create a core design that he liked, the aim was to give the bike an attacking, lunging look when viewed from the side, whilst also offering a significant reduction in aerodynamic drag.

An entirely new exhaust had to be built to feed the turbo, so Carl created a new stainless steel unit that passed through the turbine under the seat, then exited on the righthand side. The front suspension was rebuilt using a pair of Marzocchi Forks from a pit bike combined with parts from the original Yamaha forks, I’ve never heard of this being done before but it performed at Bonneville without a hitch.

Super Rat couldn’t find any sponsors for their new salt flat racer so their friend Paul Haukaas made one up and painted it on either side of the bike along with the engine size and class name (MPS BG 500cc). Funnily enough, once they arrived in Bonneville they met the team from XS Energy Drinks who gave them a few cases of their product and some gear, apparently the drinks were a godsend during the long nights spent trying to get the carburettor to play nice with the turbo.

The terrible weather conditions at Bonneville in 2013 played havoc with the entire field of entrants, Super Rat were only allowed 6 timed runs as a result, which was barely enough for shakedown testing. The best run they managed was just over 100mph but keeping the fuel pressure above the turbo boost pressure needed more time to resolve than they had available.

Super Rat are now back in their workshop building a fuel injection system and hooking up an intercooler to their handbuilt streamliner, they’ll be back at Bonneville in 2014 with the bit between their teeth and the 500cc world record in their sights. 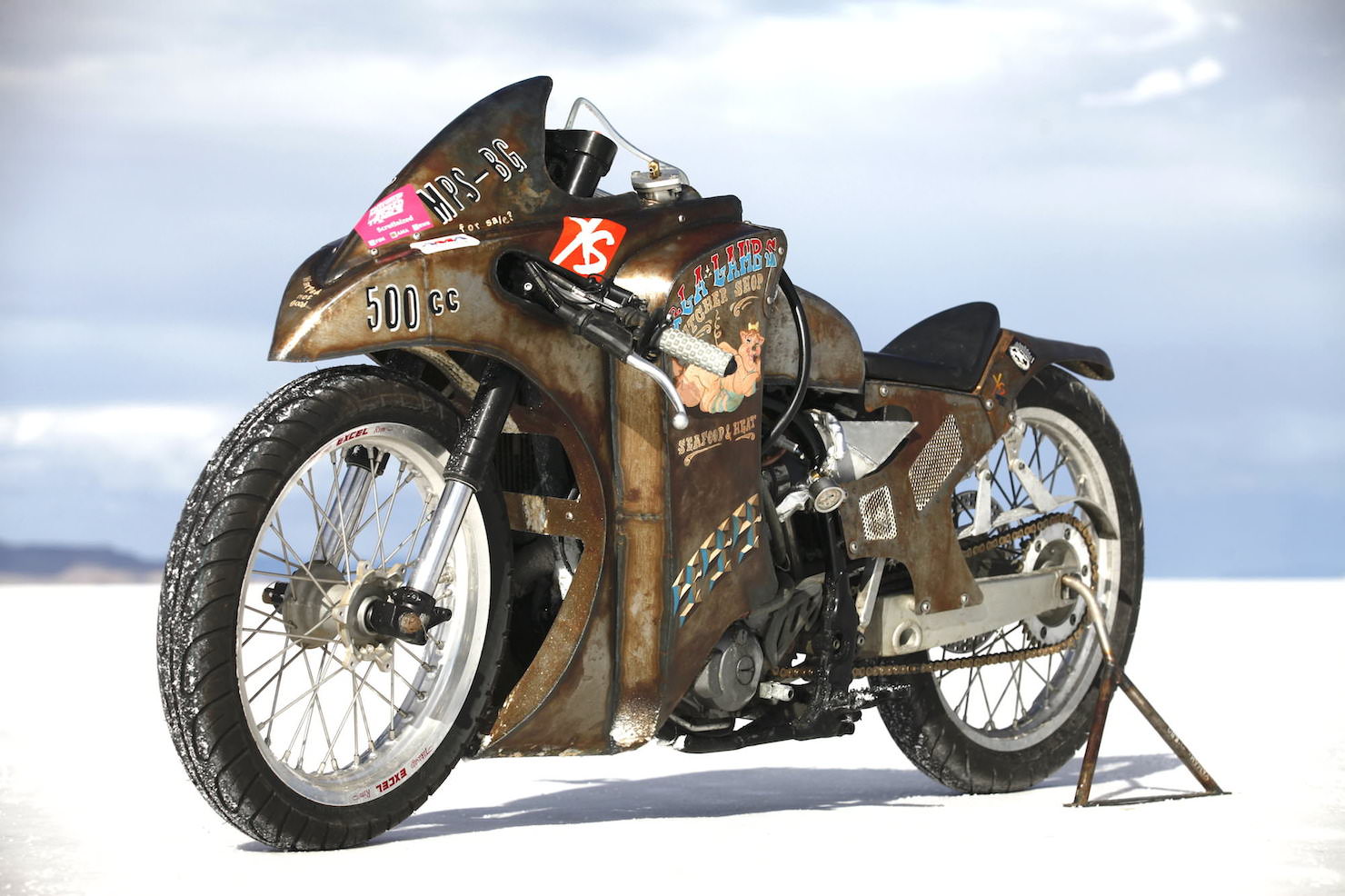 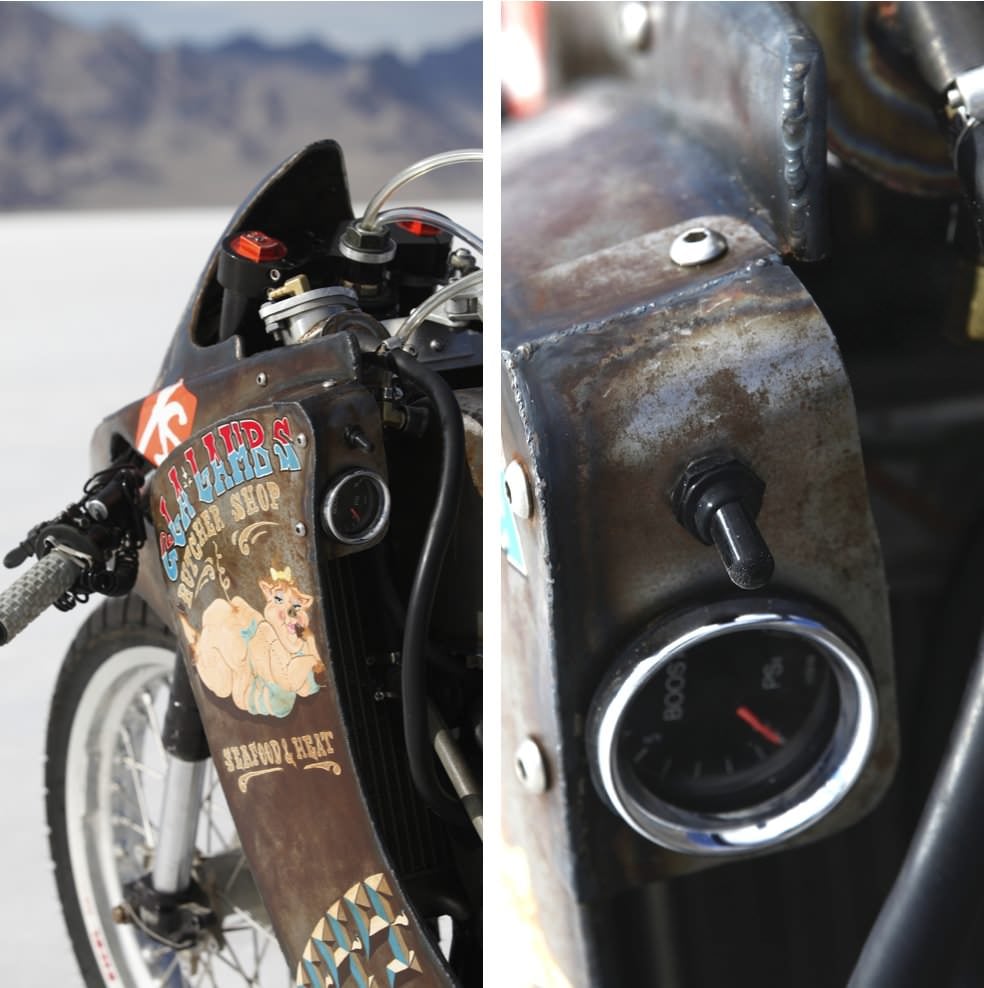 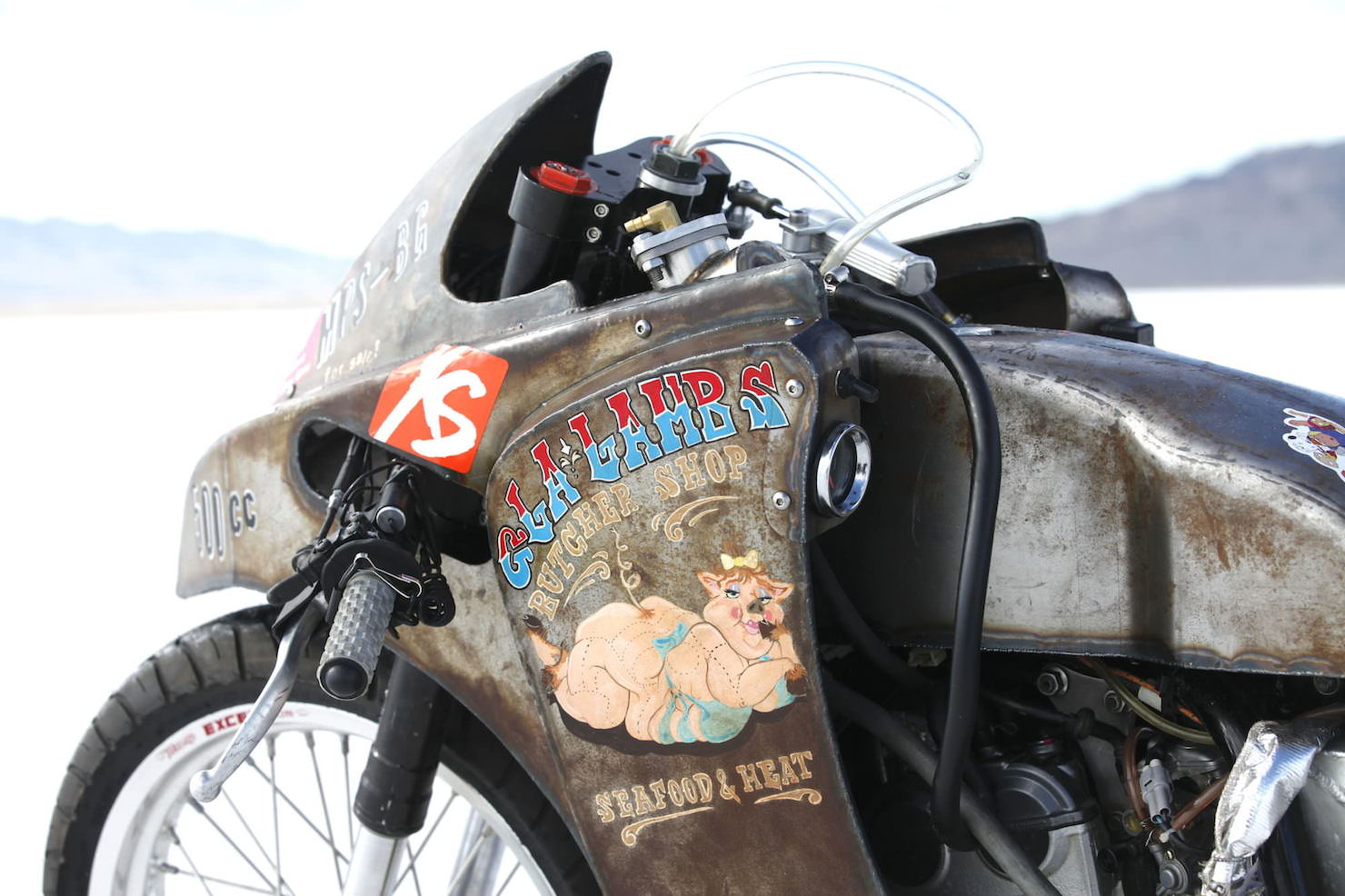 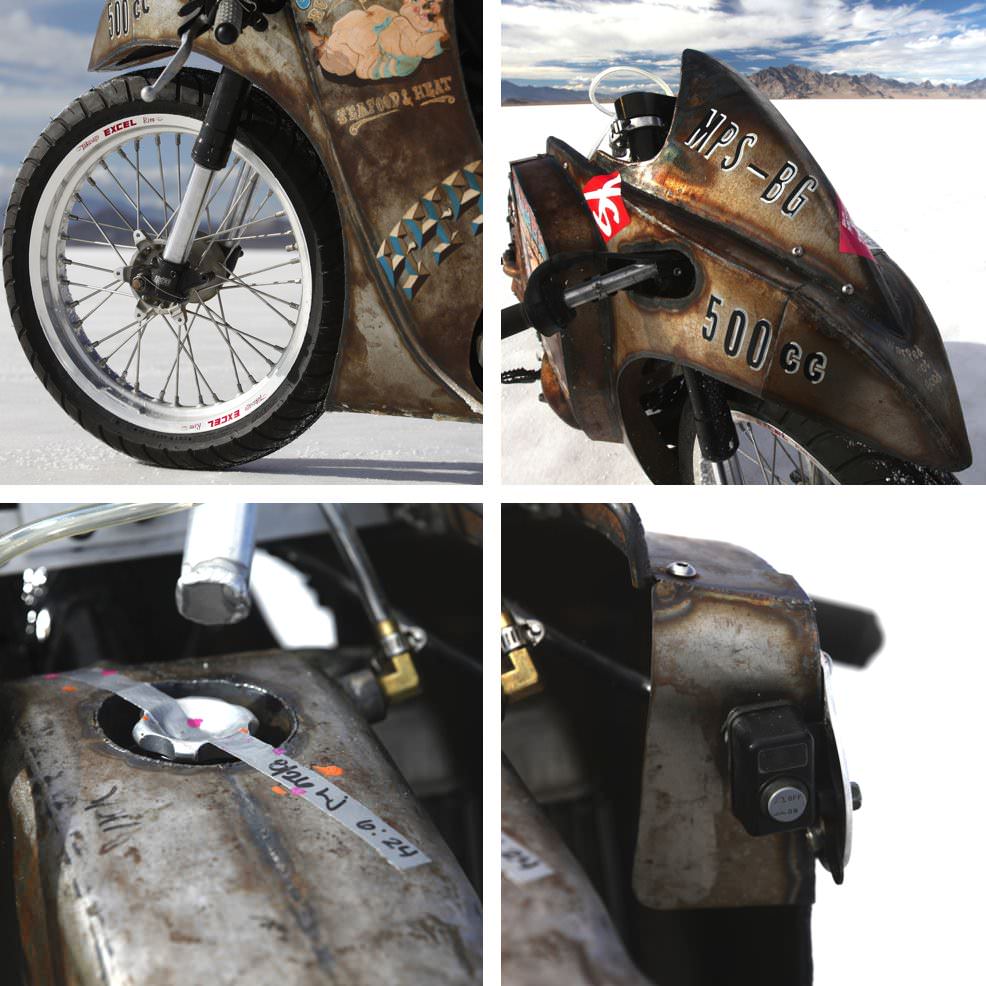 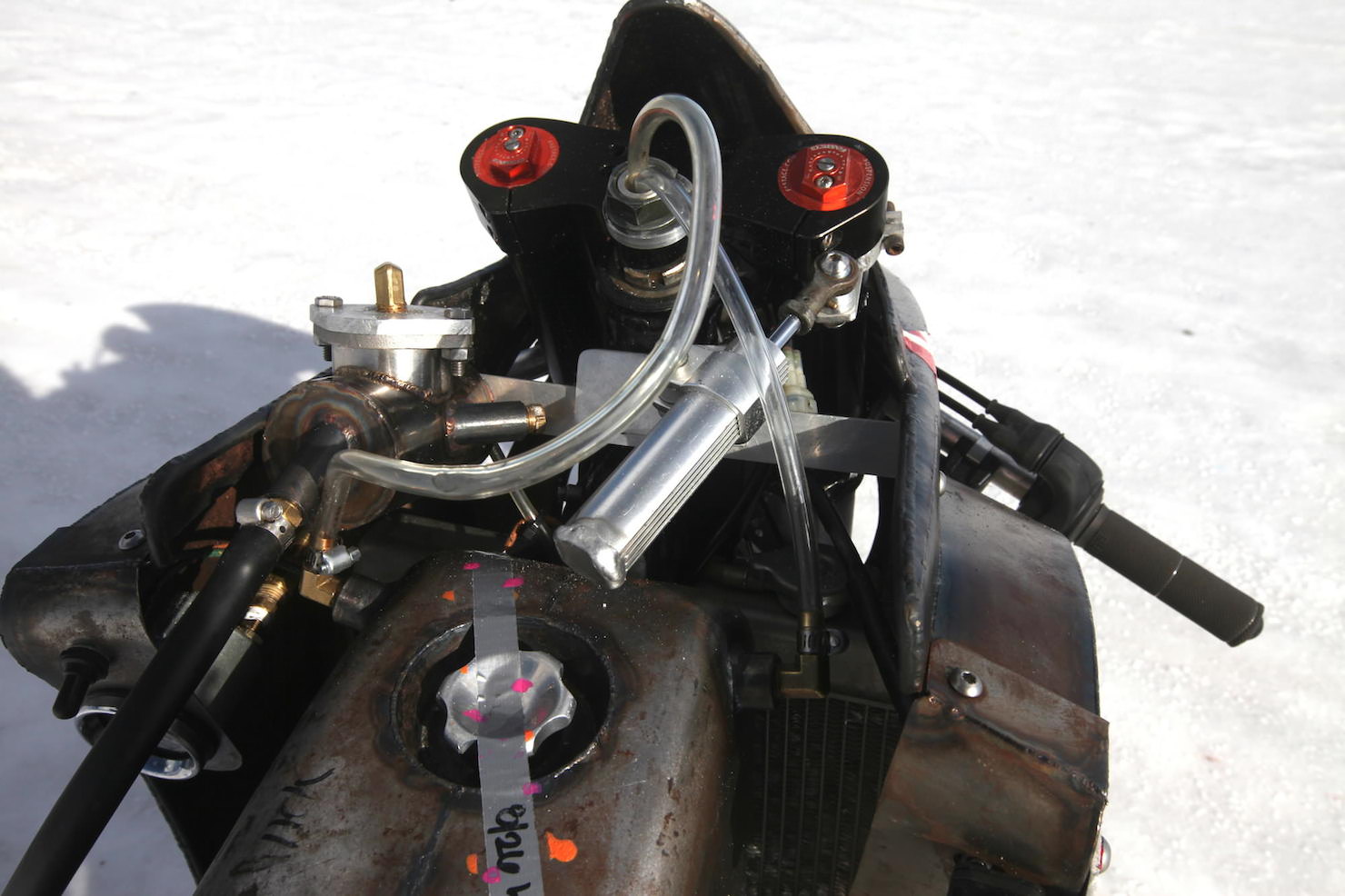 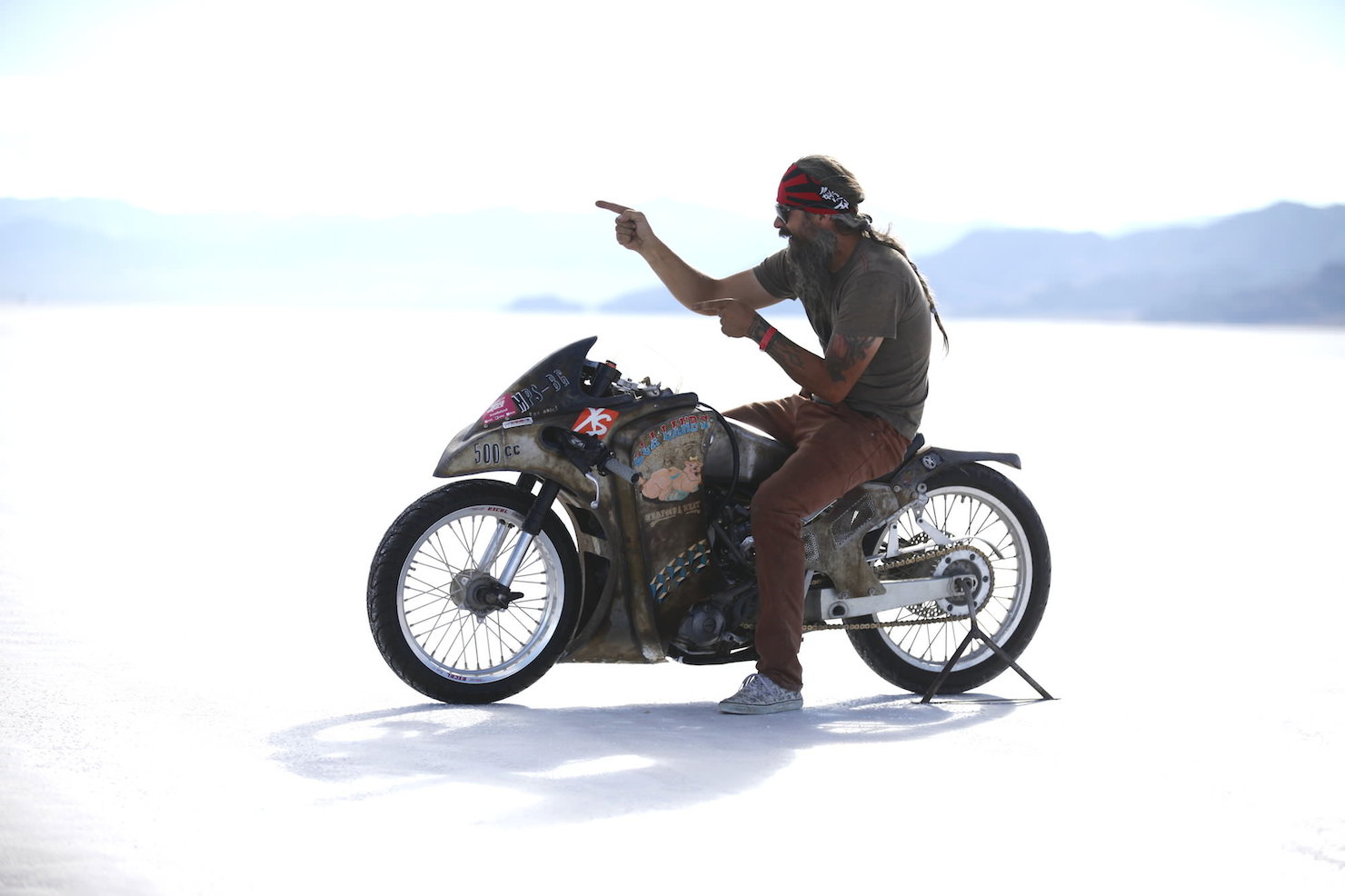 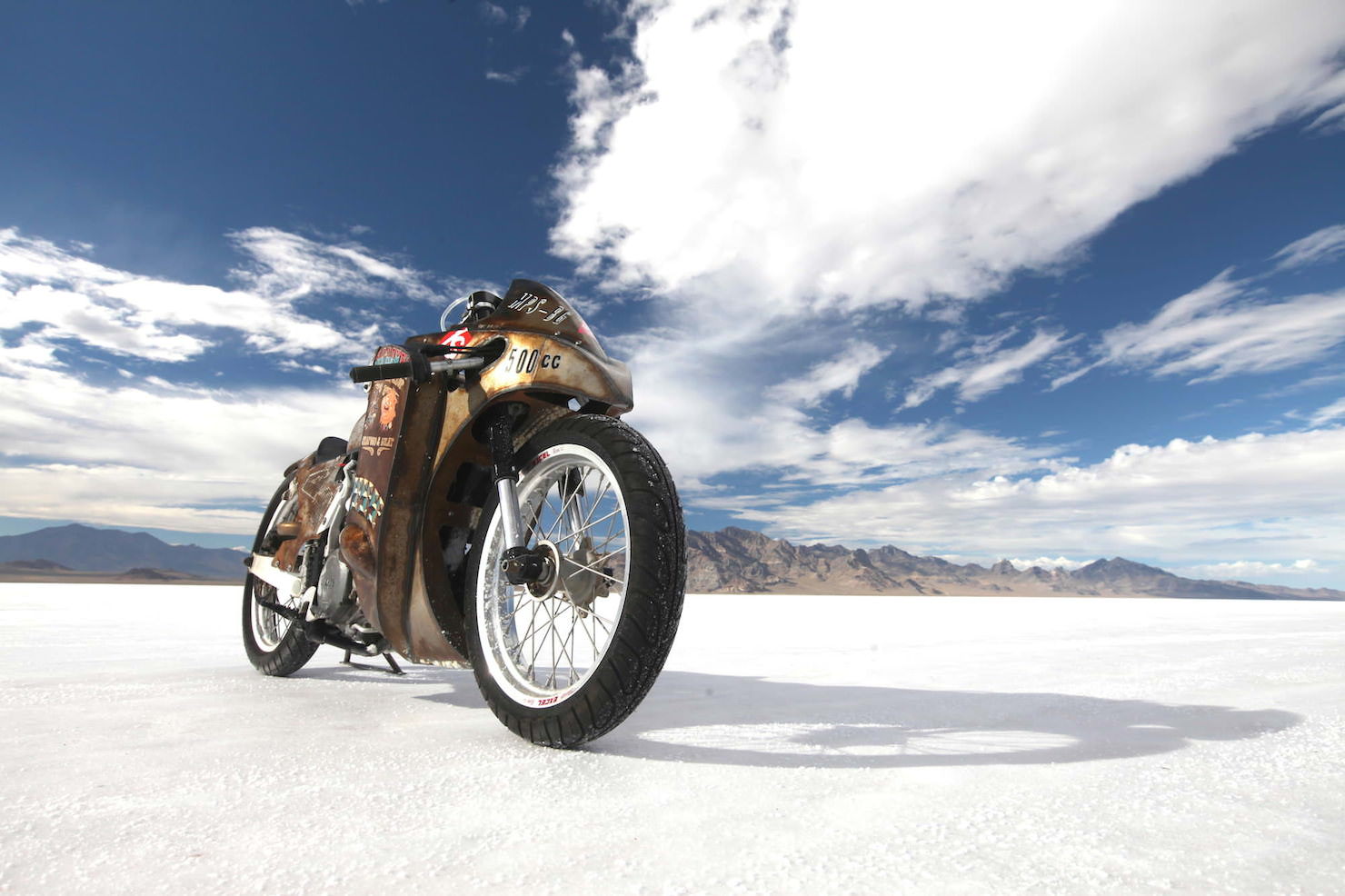 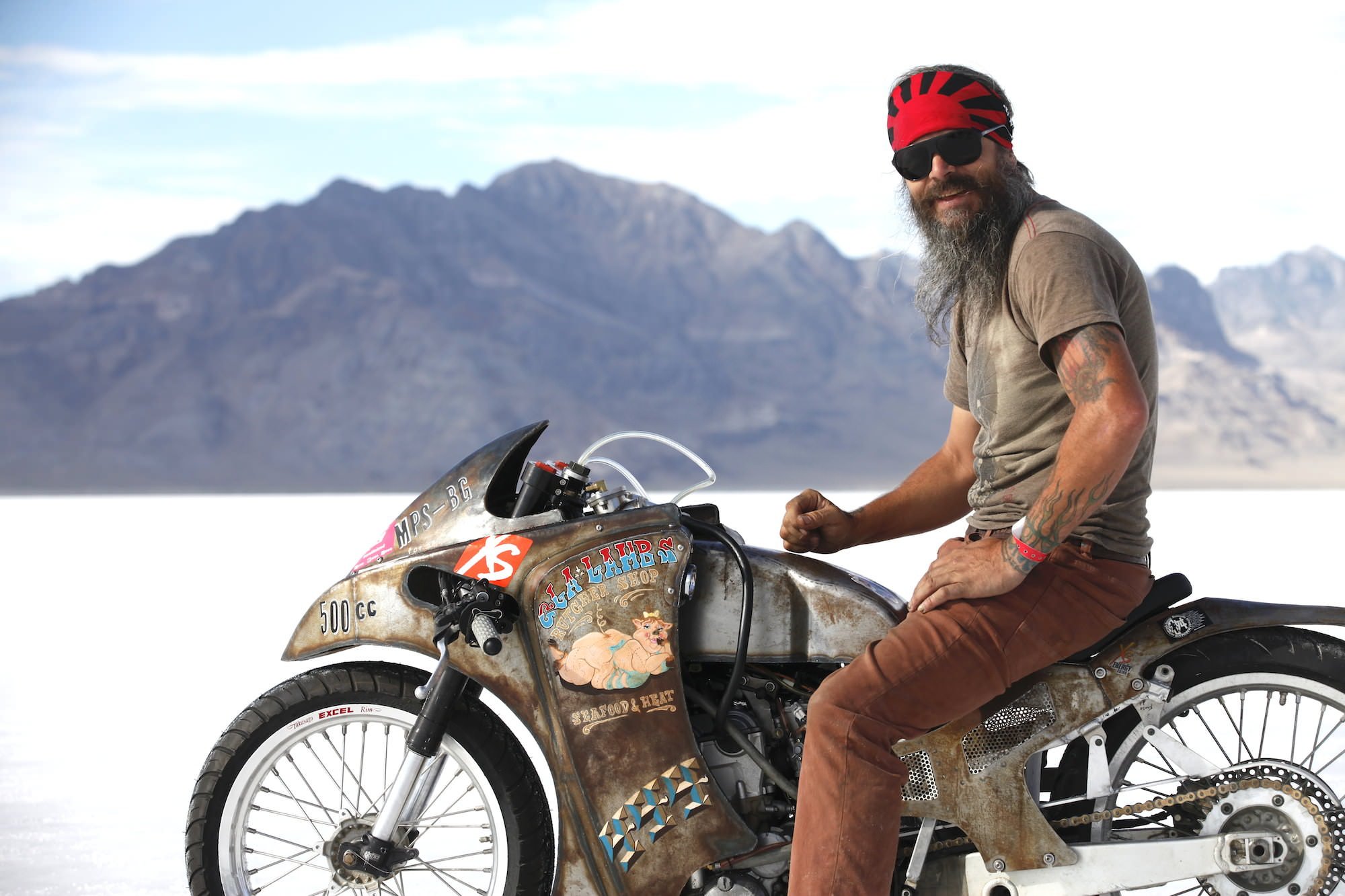