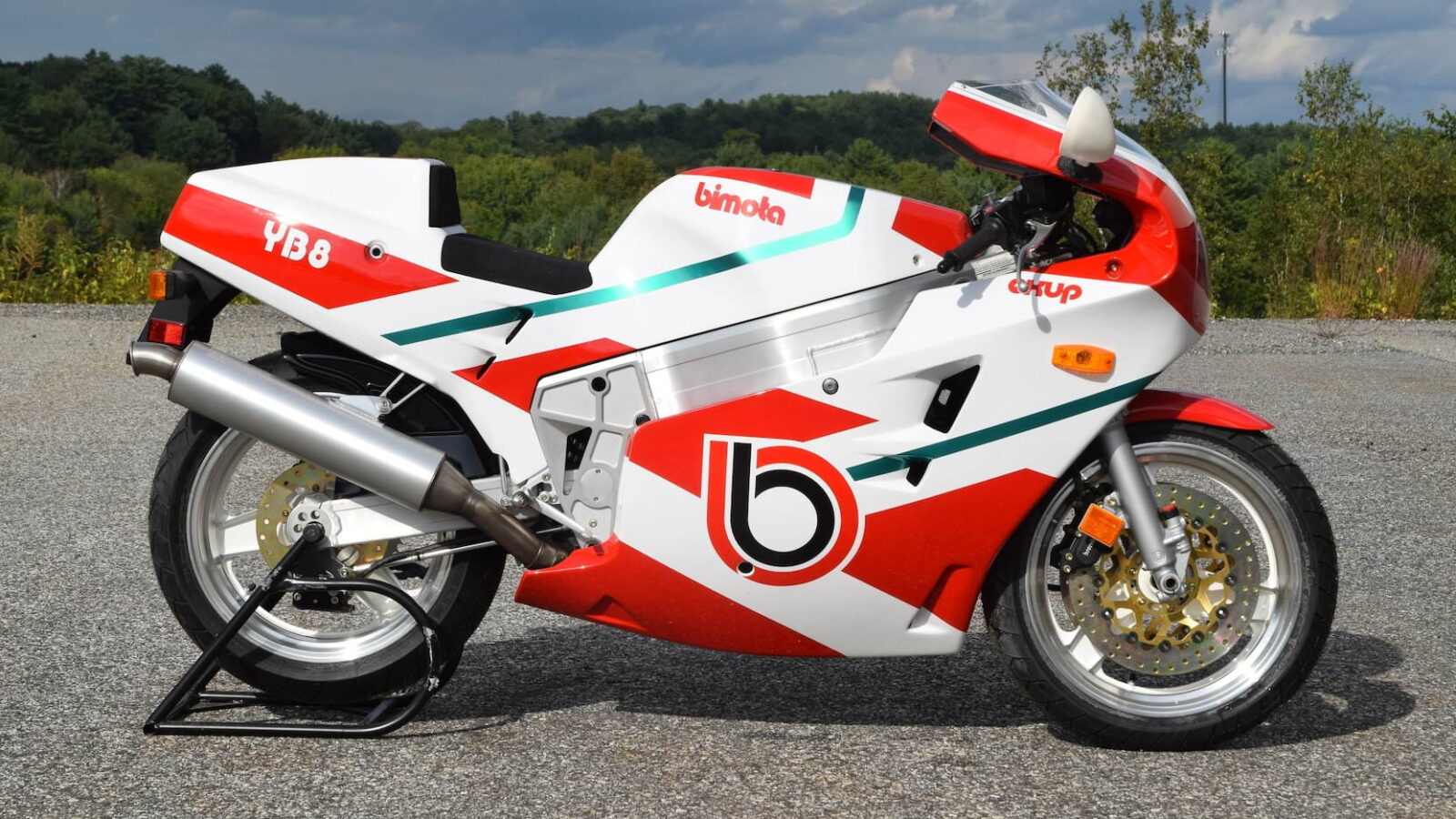 The Bimota YB8 is a rare early-90s Italian-Japanese superbike with scalpel sharp handling and gobs of reliable power from its four-cylinder, 149bhp, 1002cc engine sourced from the Yamaha FZR1000 EXUP.

Those of you with a passion for classic superbikes will already know all about Bimota, but for those who haven’t yet encountered a bike from the storied Italian company, I’ve added a quick speed run of Bimota’s history below.

The company was founded in 1973 in Rimini, Italy by three men who would also donate their names to the firm, they were Valerio Bianchi, Giuseppe Morri, and Massimo Tamburini. If you take the first two letters of each of their surnames, you get Bi–Mo–Ta, or Bimota.

The three men created Bimota to bridge the gap between the highly capable Japanese motorcycle engines of their era, and the oftentimes lacklustre frames, suspension, and brakes that were fitted to Japanese motorcycles. Many of these frames were described in-period as being made from spaghetti, and more than a few Japanese superbikes of the 1970s were nicknamed “widow makers” due to their questionable handling. 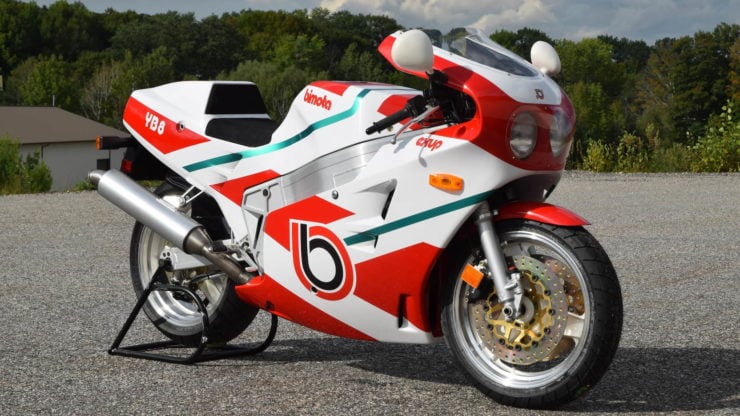 This was likely frustrating for the Japanese engine designers, as they were developing many of the very best motorcycle engines in the world at the time. What Valerio, Giuseppe, and Massimo did was build the rest of the bike around the engine at the same high level, unleashing the engines true performance ability.

Bimota would largely focus on building motorcycles for engines from Suzuki, Honda, and Kawasaki, however many other engines were used over the company’s history. The model name designation makes it remarkably easy to know what you’re looking at – they use the first initial of the engine supplier first, then a “B” for Bimota, then a number that tells you how many models from that engine supplier they’ve created.

For example, this is the Bimota YB8 – so we know it’s a Yamaha-Bimota-8, or a Yamaha-powered Bimota, and it’s the 8th model using a Yamaha engine that they built.

The bike you see here is an immaculate Bimota YB8 from 1992, it’s showing just 0 miles on its odometer, doubtless making it one of the lowest mileage examples anywhere in the world.

The Bimota YB8 was powered by the 1002cc engine from the Yamaha FZR1000 EXUP capable of just under 150 bhp – this was a significant power figure in the early 1990s and it’s still nothing to sniff at today, 30 years later.

The engineers at Bimota took this engine and installed it into their own twin spar aluminum perimeter frame, a frame that had originally been designed for the Bimota YB4EI, a bike that won the first ever World Superbike race in 1988 at Donington, then claimed a number of other wins that year and very nearly won the championship. 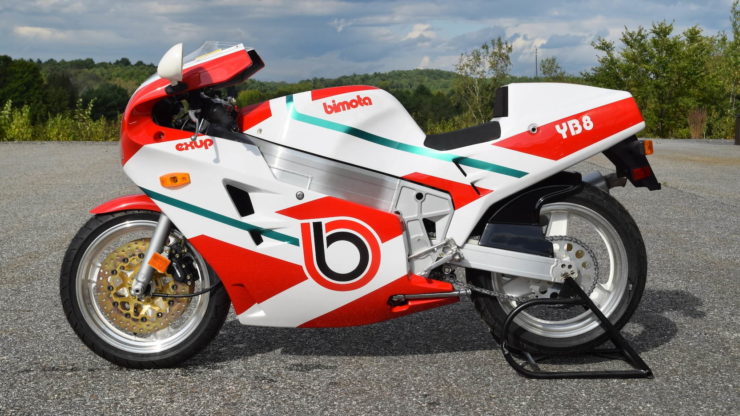 The body design is pure Bimota with a signature livery, suspension is fully adjustable Marzocchi front and back, and there are race-derived Brembo brakes fitted, and lightweight alloy wheels.

By the 1990s the Japanese had largely caught up to the Europeans on motorcycle frame design, and their bikes typically offered excellent handling right out of the box. Despite this, Bimota still found an audience for their blisteringly sharp YB8, despite the fact its MSRP was over twice as high as the Yamaha FZR1000 EXUP in most world markets.

Today both collectors and enthusiasts are always on the hunt for classic Bimotas. There’s something strangely unique and intoxicating about the unusual Italian superbikes, and it doesn’t hurt that their engines are (usually) relatively easy and cheap to work on thanks to their Japanese provenance.

This 0-mile Bimota YB8 is due to roll across the auction block with Mecum in January, there’s currently no estimate attached to it, and you can click here if you’d like to read more or register to bid. 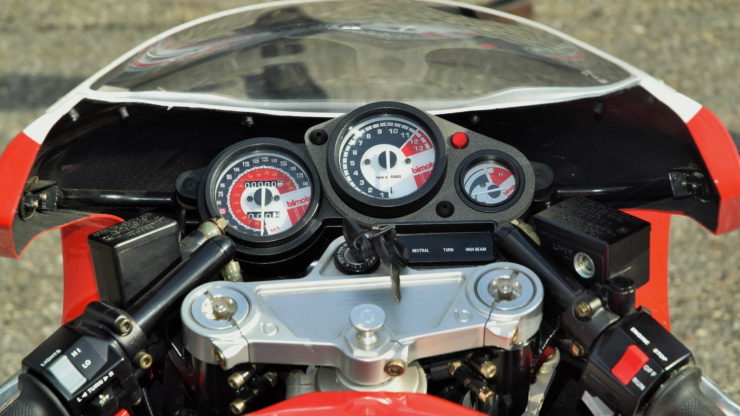 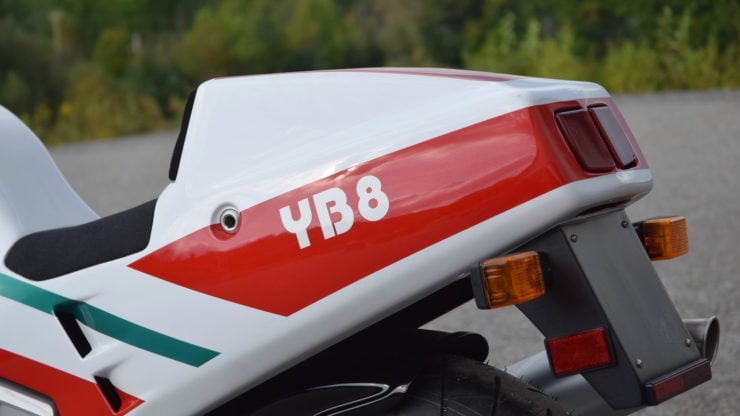 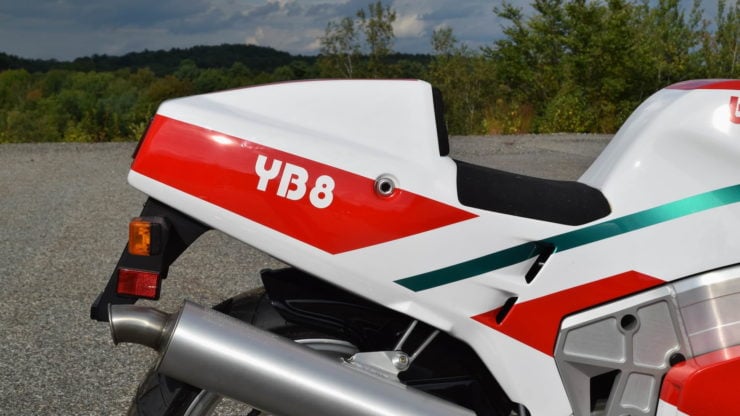 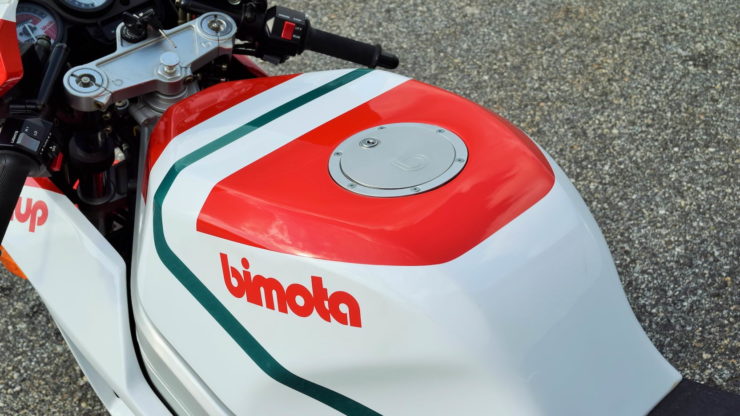 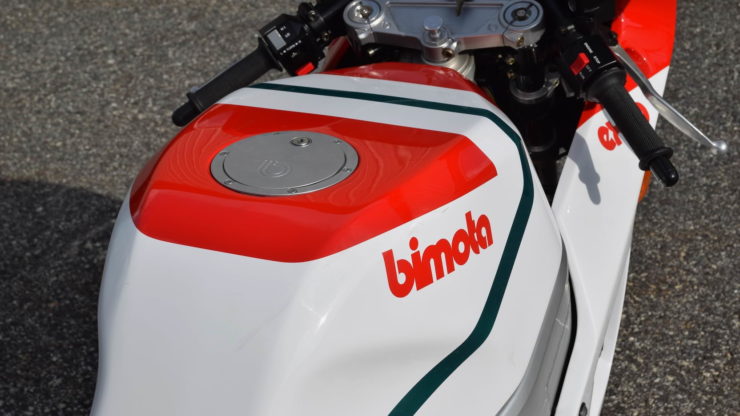 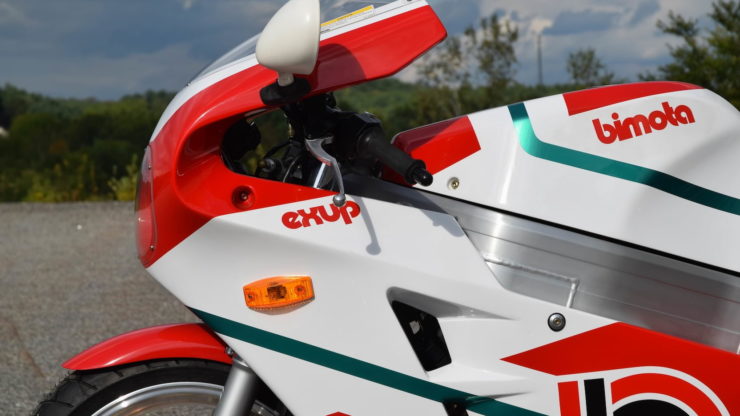 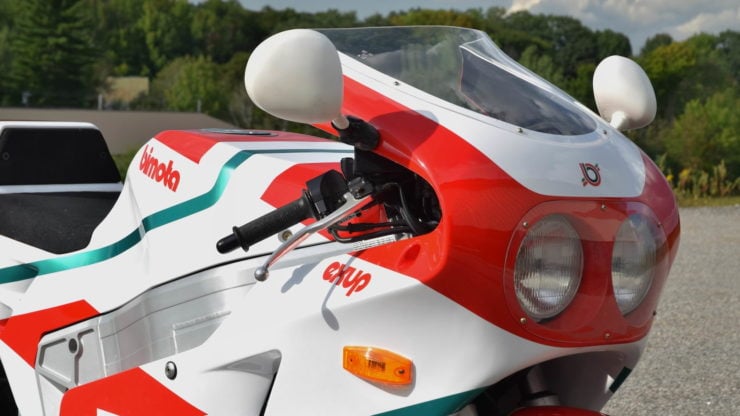 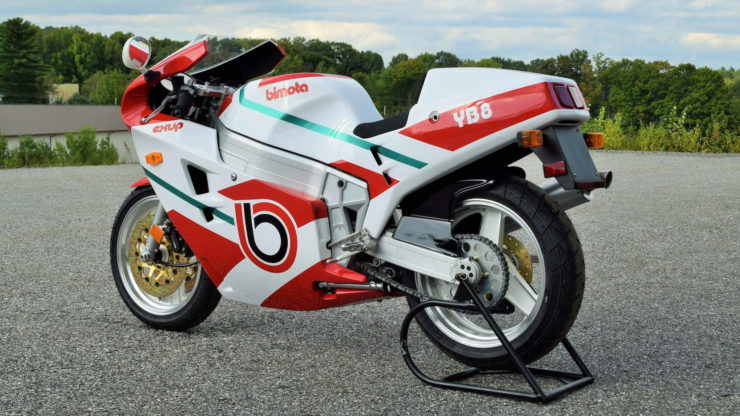 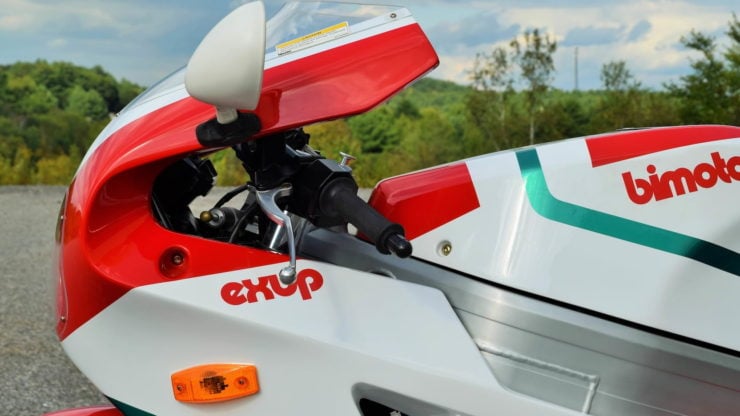 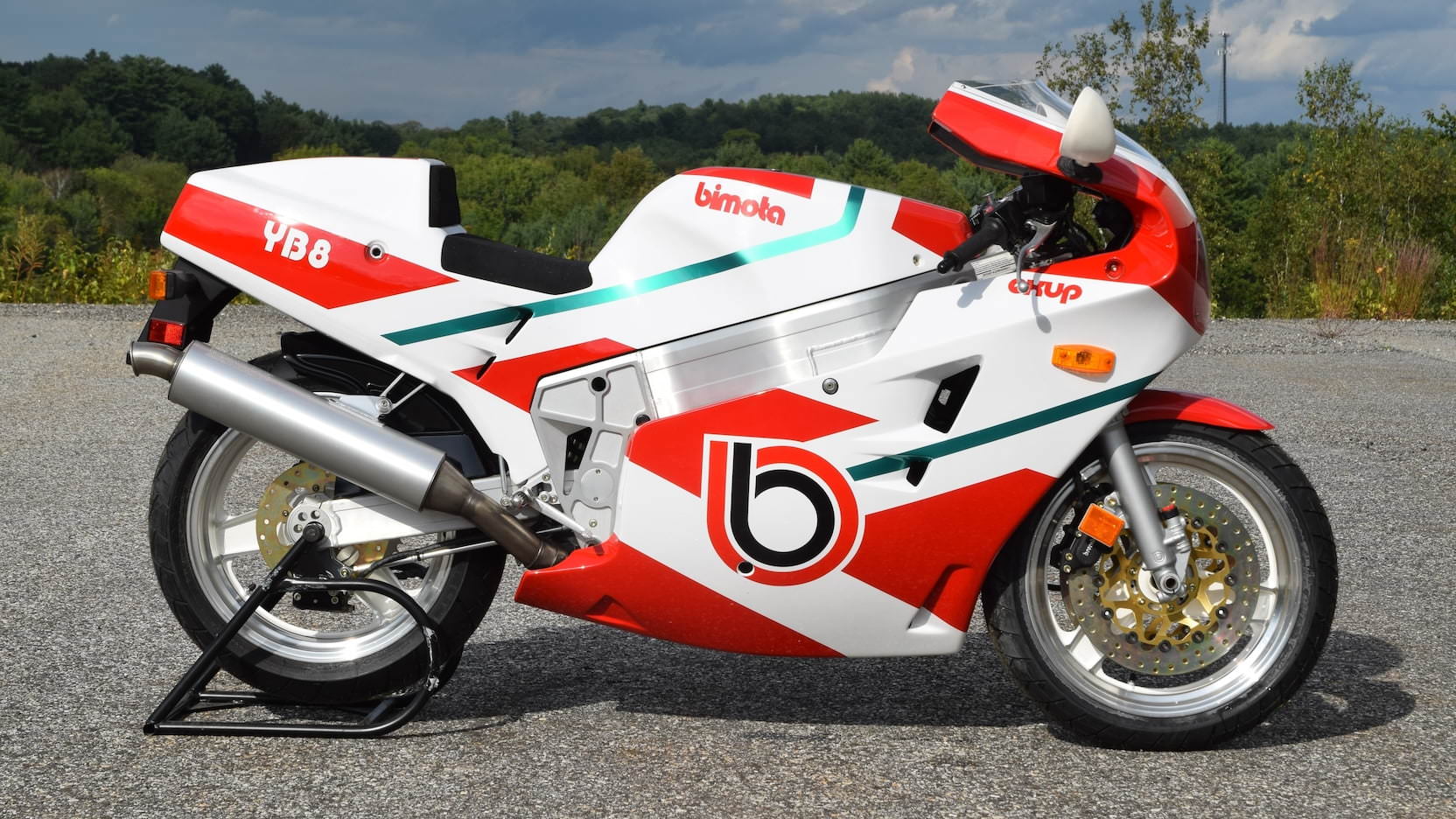