Editor’s Note: The article is incorrect, the motorcycle was mistakenly listed as an 850 Le Mans, it’s actually a 1987 LM1000. We’re leaving the information below intact as it’s accurate as a reference regarding the 850 Le Mans III.

This is an original, unridden Moto Guzzi 850 Le Mans III from 1981. It’s still in its original factory crate and it’s part of the Musee L’Epopee de la Moto Collection – but in a couple of weeks it’s coming up for sale, offering enthusiasts a once in a lifetime chance to buy an all-new Le Mans III.

In Moto Guzzi circles, the 850 Le Mans III is a highly prized motorcycle as it carried on the traditions created by the original Moto Guzzi 850 Le Mans, but it improved significantly on the slightly less popular 850 Le Mans II model.

The original 850 Le Mans had been released in 1976 as a high-performance, upgraded version of the V7 Sport model. As the model name implies, the 850 Le Mans had its engine capacity increased from 748cc to 844cc, but this was just the beginning of the performance improvements that would see horsepower increased from 53 bhp to 71 rwhp by the time the model was released to the public.

These figures may not sound all that wild now, but in the mid-1970s 71 rwhp and a 130+ mph top speed was nothing to sniff at. Other engine modifications made to the first Le Mans included higher-compression domed pistons, larger intake and exhaust valves, and Dell’Orto 36mm pumper carburettors with filterless velocity stacks.

The Le Mans II featured a few changes over its older sibling including a new wind tunnel-developed half fairing, Nikasil lining on the cylinders, and air-assisted front suspension. The Moto Guzzi 850 Le Mans III was a return to the core principles of the original Le Mans model from 1976, with over 80 changes made to the Le Mans II.

Among these changes were a new fuel tank and seat, newly designed fairings, and an instrument cluster dominated by a race-inspired white faced Veglia tachometer. The longitudinally oriented V-twin was also extensively modified with revised cylinder heads, the push rods were moved slightly, the carburettors and exhaust system were both revised as well, and the entire engine was now made using finer tolerances than ever before.

Horsepower, torque, and reliability were all increased, and the 850 Le Mans III is now seen as a higher water mark by many.

The 850 Le Mans III you see here may very well be the last opportunity anyone has to buy a brand new, unridden example of the model. It’s a red/white version of the bike, still strapped down with the factory fixings to its base, with a removable cardboard cover for protection while shipping.

Obviously if the new owner wants to ride it it would need to be carefully and thoroughly recommissioned, including new oils, new tires, new battery, and a slew of other refreshed bits and pieces.

If you’d like to read more about this Moto Guzzi or register to bid you can click here to visit the listing on Mecum. 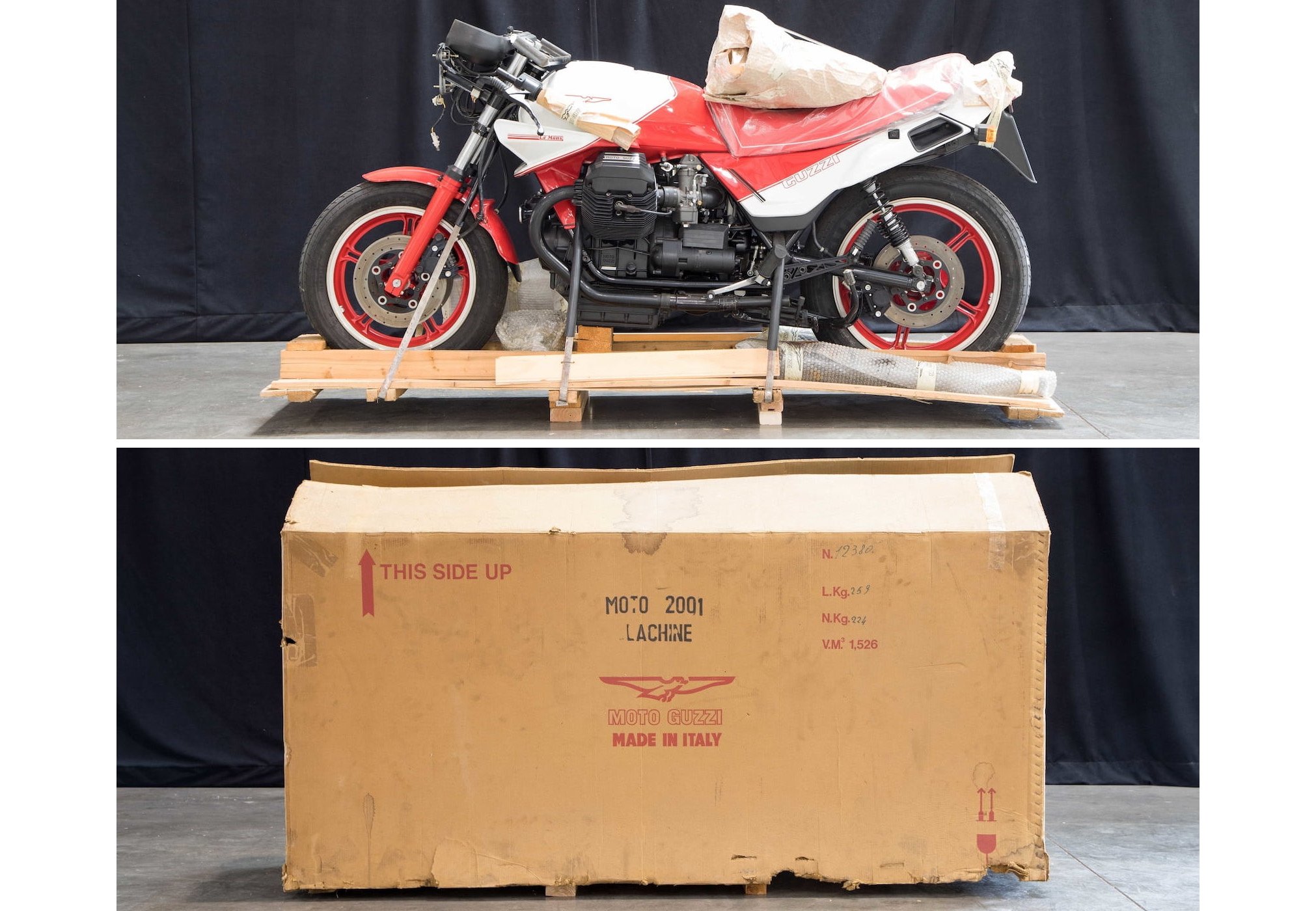