The Only One In The World: 1967 Meirson Sprint Motor (MSM) V-Twin Speedway Bike 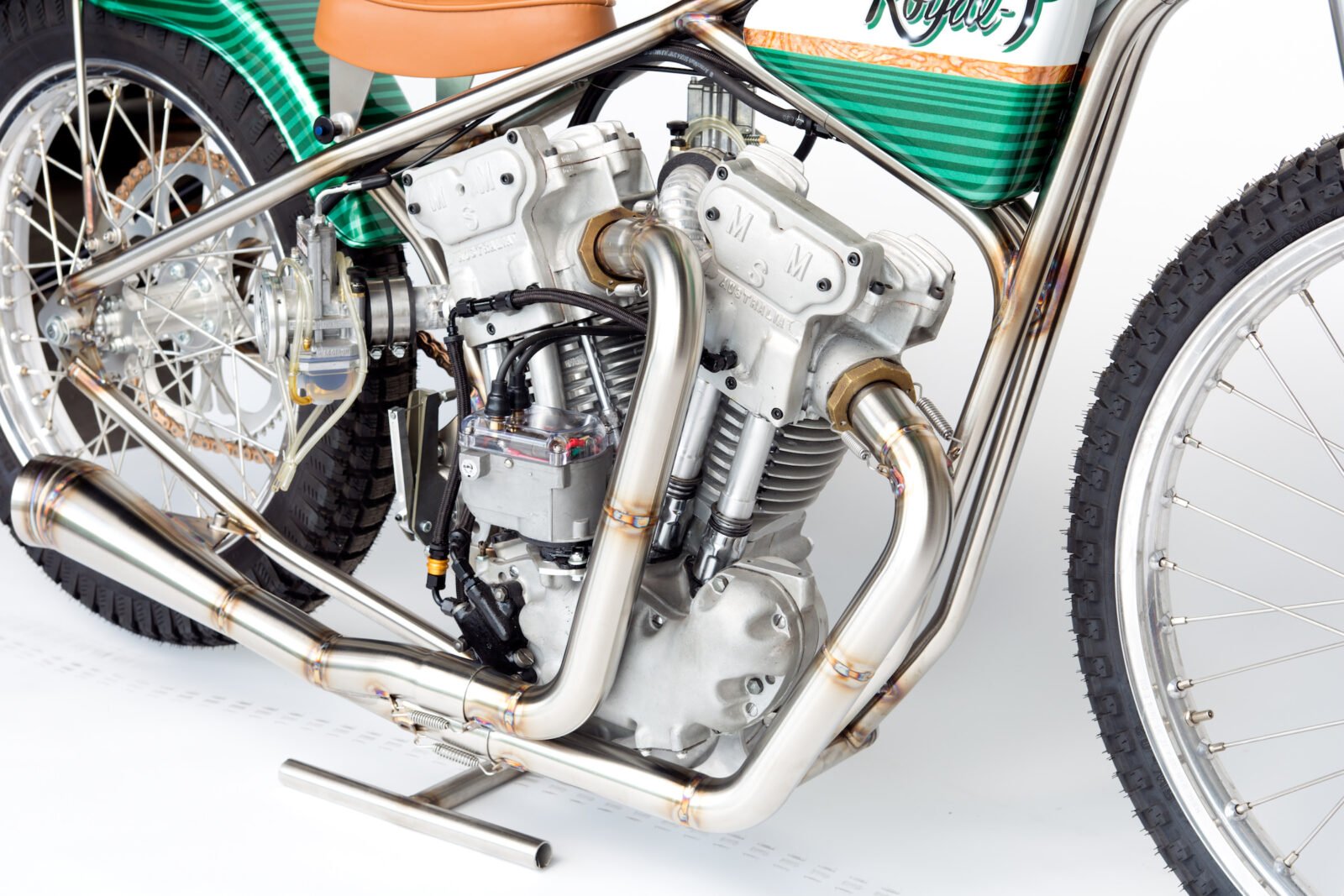 The Meirson Sprint Motor (MSM) V-twin prototype is an engine that you’ve probably never seen before. Just one was made in 1967 by a talented father and son team in Australia; Clarry and Allan Meirs – the name Meirson is a contraction of “Meirs” and “Son”.

The two men raced sidecar speedway bikes together with (father) Clarry on the bike and (son) Allan in the sidecar. They started out using modified JAP (JA Prestwich) engines, they began developing their own single-cylinder racing engines that quickly outperformed the more common JAP and Jawa engines.

The Meirson Sprint Motor was a prototype V-twin developed specifically to replace the Vincent V-twin they had been using in their sidecar speedway bike. To accelerate the development process they used a Harley-Davidson Flathead bottom-end, then developed their own cylinders, heads, pistons, and connecting rods. The valve train was sourced from an early-60s Coventry Climax Formula 1 engine, with JAP rocker arms. 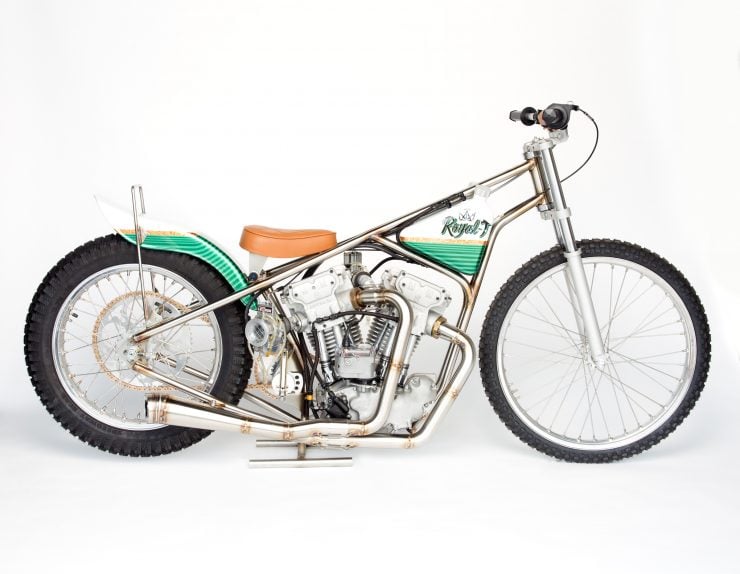 This new engine has a capacity of 1000cc, with a 15:1 compression ratio (running on methanol) 160 hp in full race trim. In its first season, the MSM V-Twin won 15 of 15 races, clinching the title and setting off a firestorm of rumors and finger-pointing.

Other competitors were convinced that the engine was over the 1000cc size limit, so the Meirs disassembled the engine under the watchful eye of the race officials for inspection – it was found to be legal, and their championship stood.

Shortly thereafter the engine was stolen, exactly what happened in the intervening 50 years is very unclear, but the engine vanished for decades before re-appearing in an altogether unexpected place. 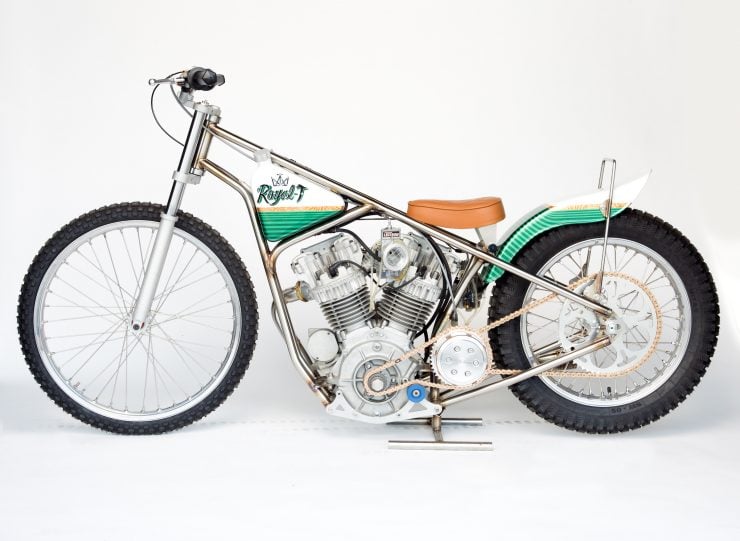 It’s not known exactly how, but the MSM V-twin made its way across the Pacific Ocean at some point in its mysterious 50 year disappearance, and it ended up hanging on the wall of Jesse James’ (of West Coast Choppers) personal shop in Los Angeles.

This is where the engine was when it came to the attention of Patrick Tilbury, the founder of Royal-T Racing and a former protégé of Jesse James. After asking James about the engine and learning of the mystery surrounding it, Tilbury realized he had to have it. He bought the engine from James, and researching its history became a passion project that would consume weeks of his time, after a couple of months he’d tracked down Allan Meirs, now in his 70s, who was utterly dumbfounded that the engine had resurfaced all the way over in the USA.

Allan provided a wealth of invaluable information about the engine, which allowed engine builder Bill Combs of B&B Racing in Metairie, LA to complete a comprehensive restoration on it – bringing it back to almost-original specification. 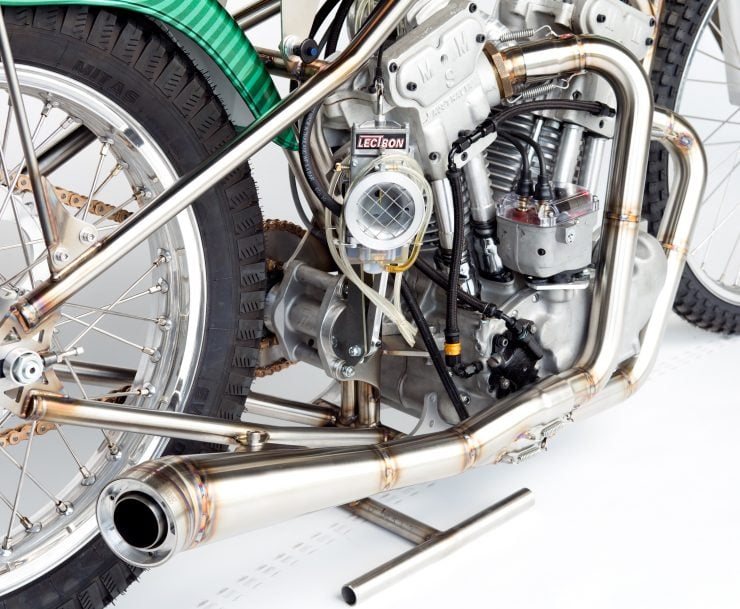 It was around this time that Patrick decided to build a bike for the Born Free Show, he wanted to build a bike around the MSM V-twin, he discussed the idea with Allan Meirs who requested that it be a speedway bike – as a nod to the engine’s heritage.

Patrick is a fabricator and welder with 15 years experience, he’s appeared on the Discovery Channel TV shows Outlaw Garage and Biker Build-Off, and he’s worked with some of the most respected people in the industry in the USA.

When discussing the build process, Patrick said “The proportions on this bike was my biggest challenge, speedway bikes have a very distinct look and they have a cult following so if you don’t nail it, you will most likely hear about it immediately.” 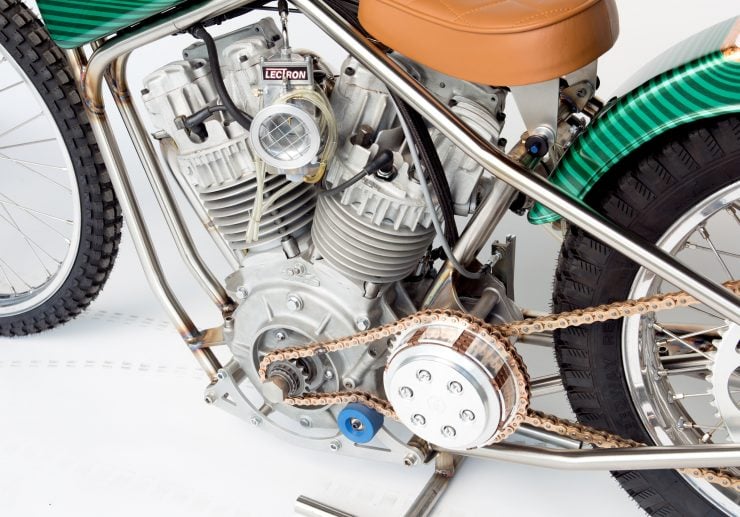 “The other challenge regarding this build was the motor looking at home in this style of bike. The motor is large, like crazy big looking, and a v-twin speedway bike doesn’t really exist. I looked a lot at how speedway bikes mount their motors, how the frames are constructed and began building my frame. I made the frame from 304L Stainless Steel, I know thats not the typical material of choice for frames but for this bike I wanted the frame to be like a ring and the motor the diamond.”

“I used all speedway parts from the wheels to the layshaft assembly, everything is exactly what you would find on a speedway bike. The rake is 19* and the wheelbase is 54”. My buddy Chris Moos of MoosCraft and myself knocked out all of the sheetmetal work together, making all of the tins out of Aluminum.

The paint was inspired by a pack of Newport Cigarettes, I’ve always liked the design and as far as I know Newports have never sponsored any type of race bike or car. We’ve all seen the Marlboro, or John Players, or Lucky Strike cars/bikes but never Newports. The exhaust is full stainless as well and uses the Royal-T Racing production muffler.”

Allan Meirs and his wife Jean flew from Australia to California for the Born Free Show to see motor for the first time in 50 years, and perhaps more importantly to hear it run, for Allen it was a audio time machine back to his remarkable season alongside his father, winning 15 races from 15 to the soundtrack of an engine they’d built themselves.

If you’d like to add a next chapter to the remarkable life of the Meirson Sprint Motor V-twin, it’s currently for sale over on eBay, and you can click here to visit the listing. 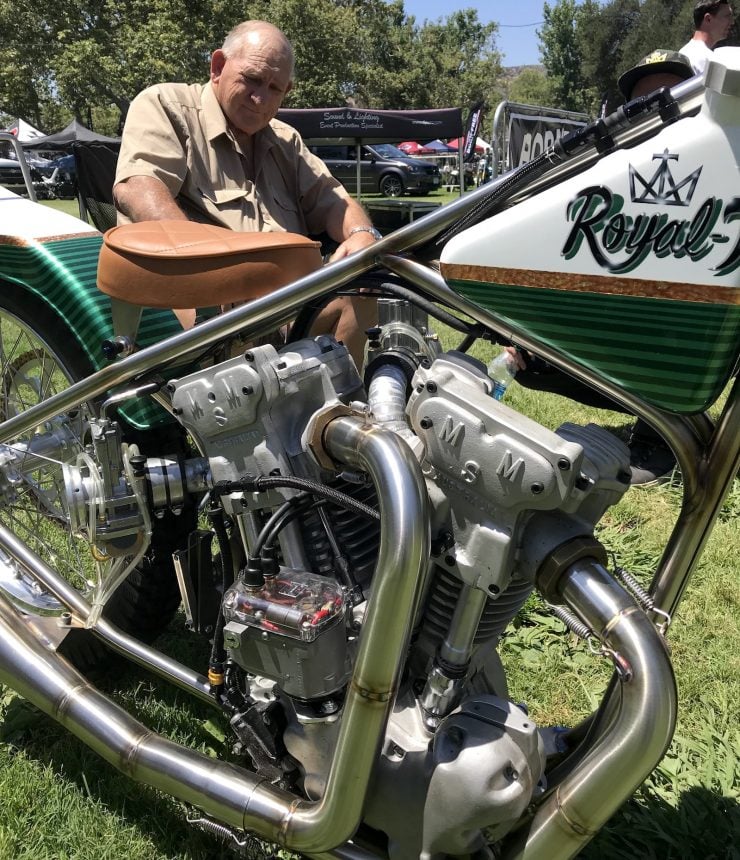 Above Image: Allan Meirs reunited with the engine after 50+ years. 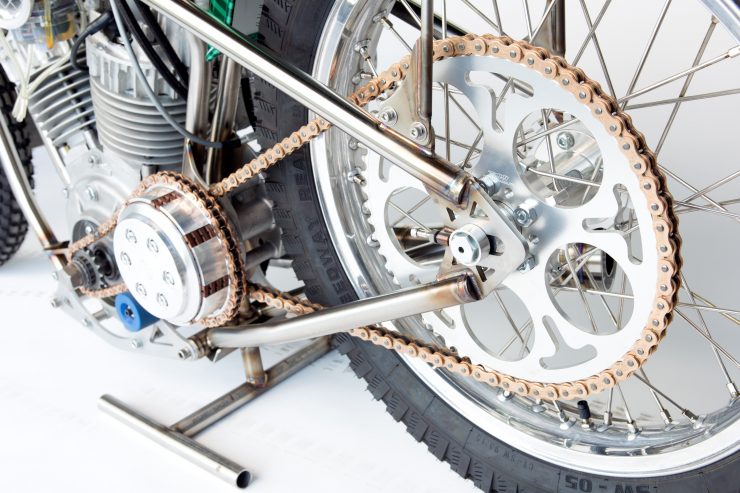 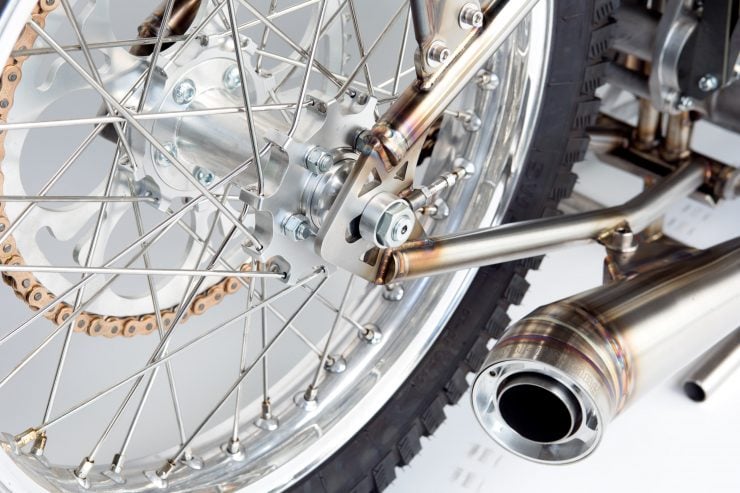 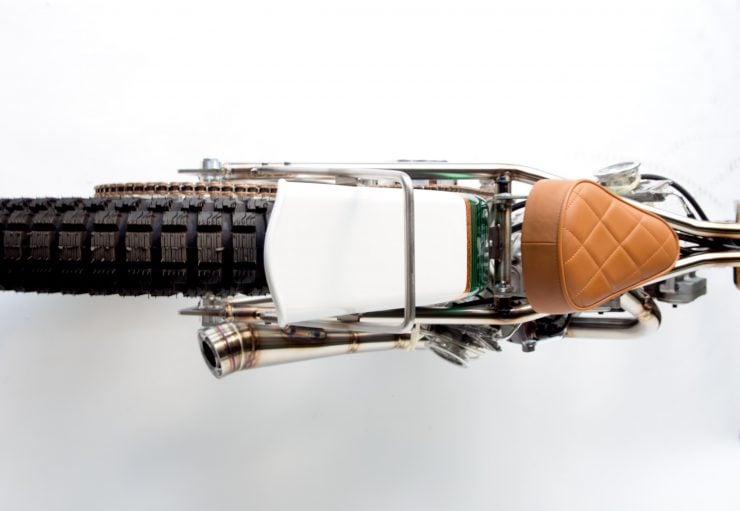 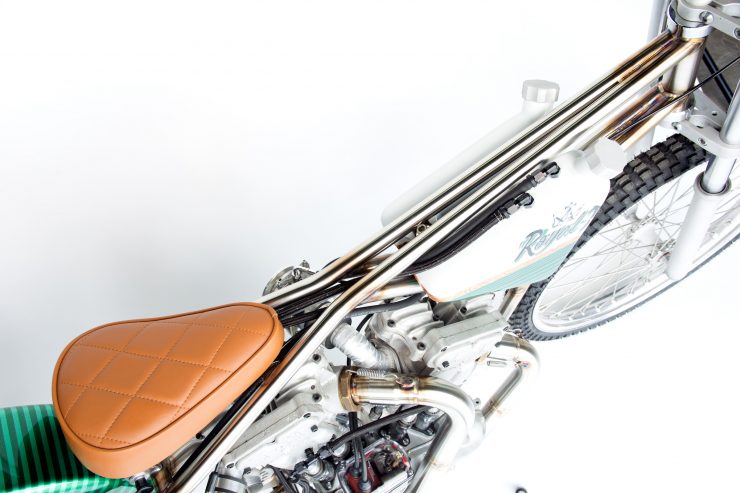 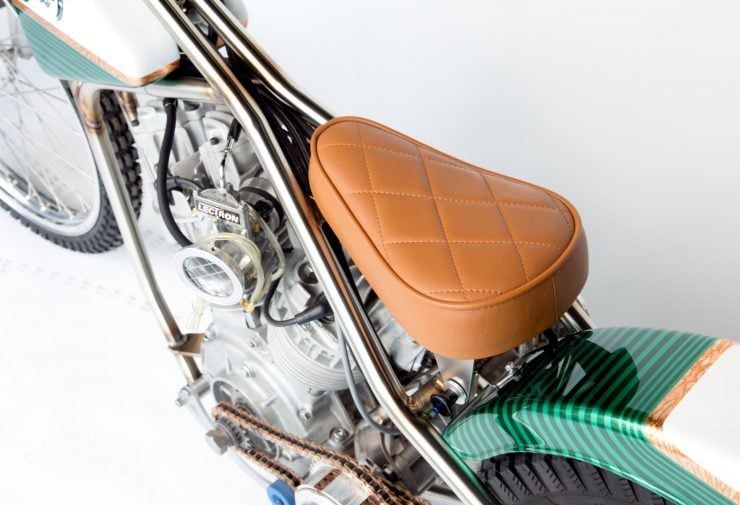 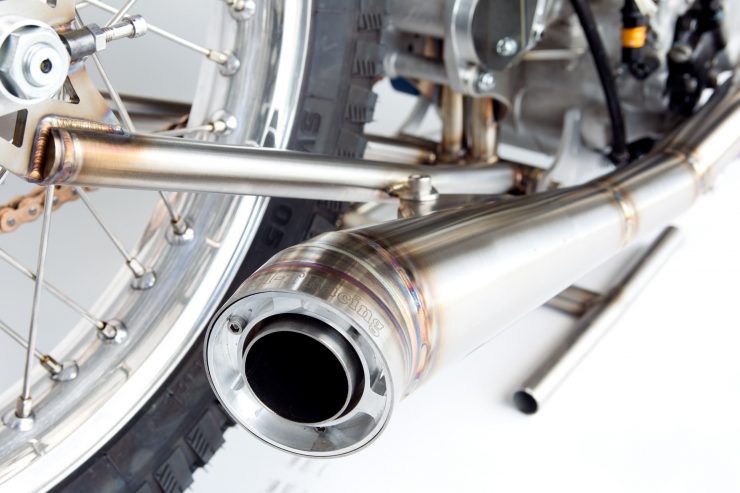 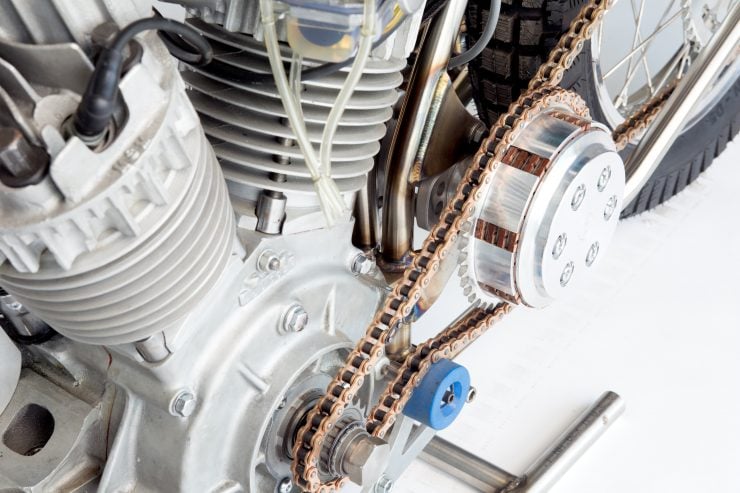 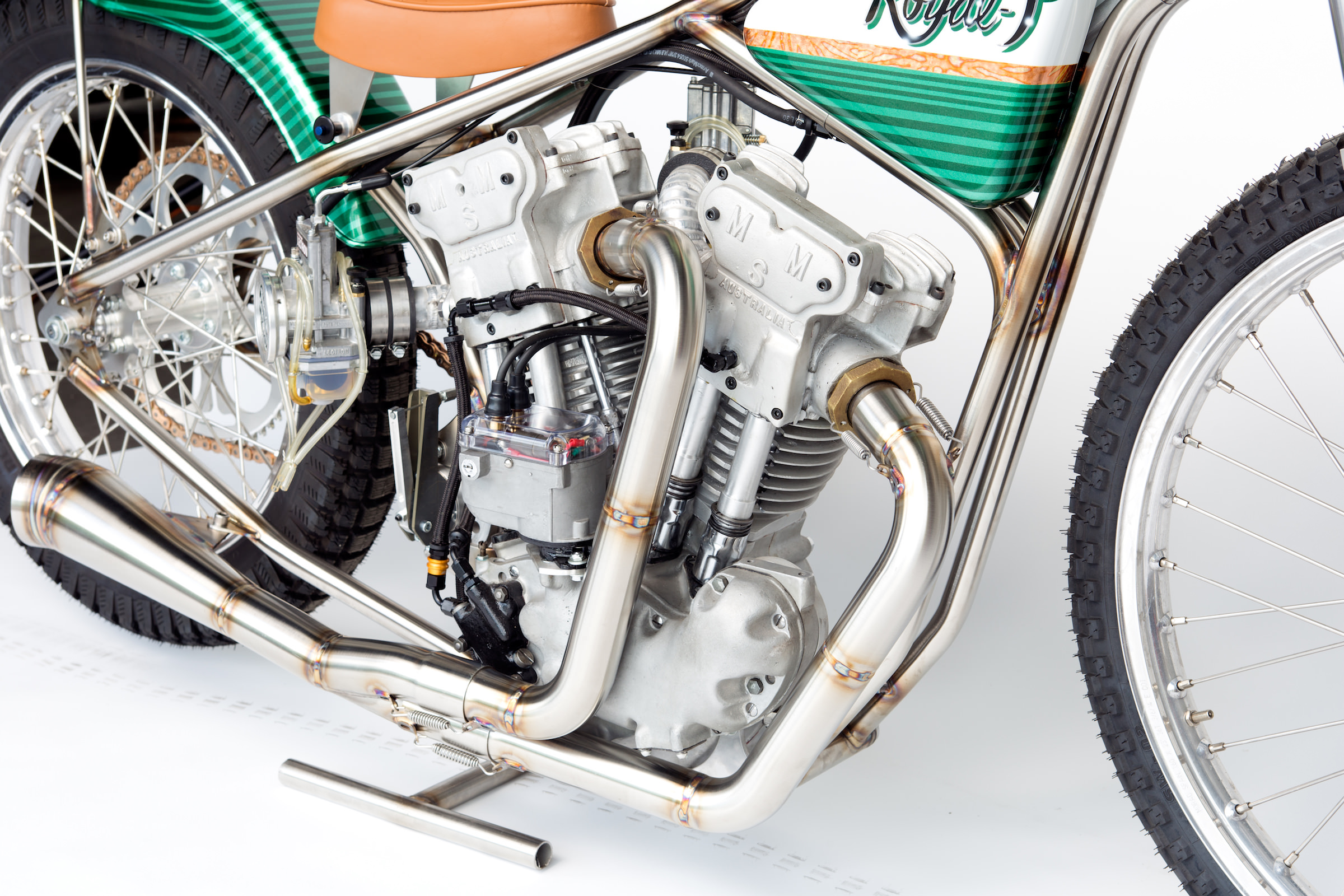