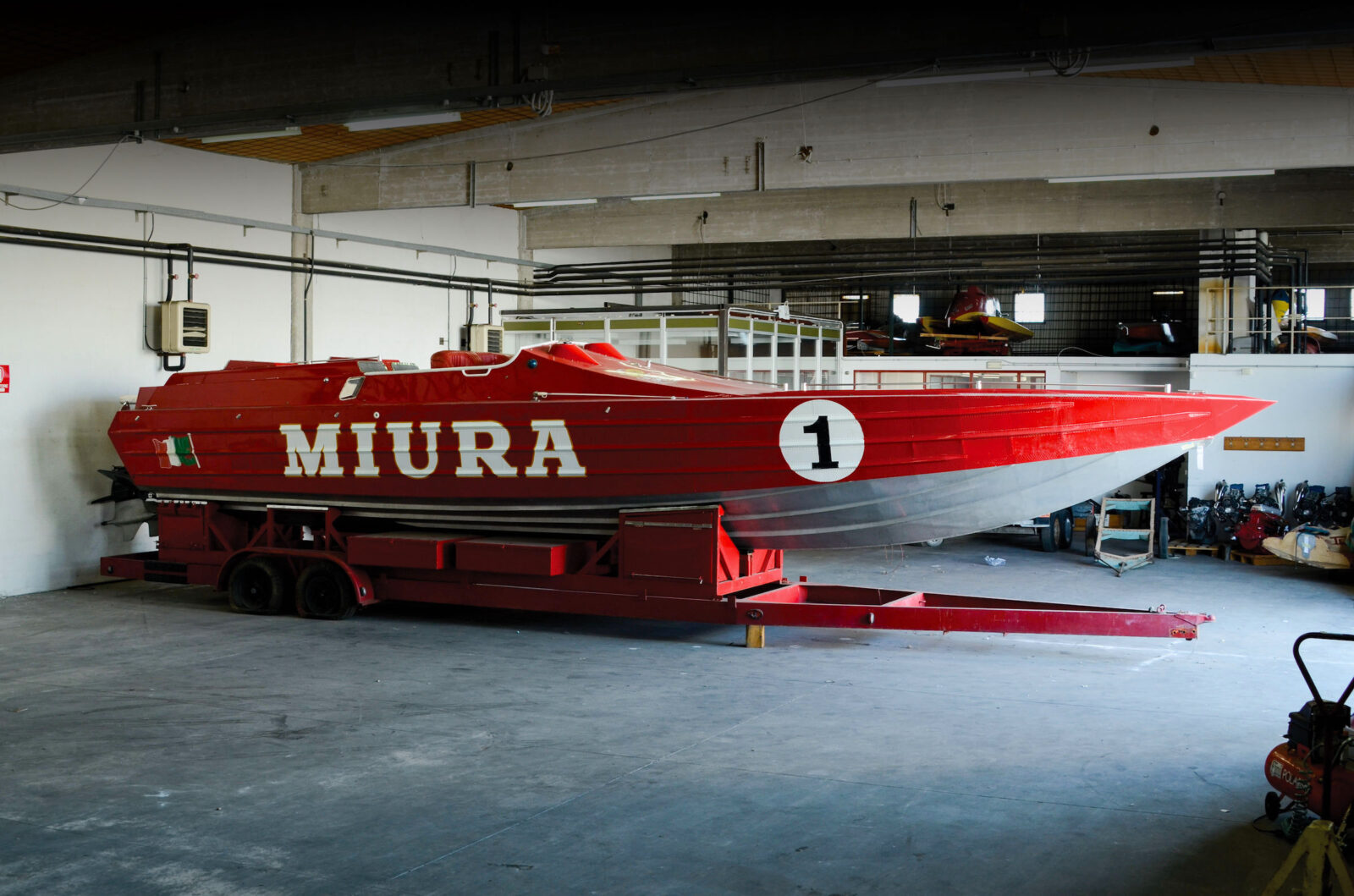 This vessel was built by Italian boatbuilders Cantieri Uniti Viareggio (CUV) to win the 1984 UIM World Championships, a feat it achieved, giving CUV their third world championship win and cementing them as one of the best offshore powerboats builders in the world.

Named “Miura” the boat is a 38′ aluminum monohull with twin, off-set engines in the rear. It was originally powered by two V8 MerCruiser engines however these were swapped out for twin 720 bhp Lamborghini V12 engines as they’re both lighter and more powerful.

The first known use of a Lamborghini V12 engine in a boat occurred in 1969, when Lamborghini founder Ferruccio Lamborghini had two of his own V12s fitted to his Riva Aquarama, a luxurious Italian powerboat often seen plying the waters of Lake Como.

It wouldn’t be until over 10 years later that Lamborghini would develop official marine versions of their V12s, thanks entirely to the Swiss brothers Jean-Claude and Patrick Mimran who took over the company in 1980 to guide it out of bankruptcy. 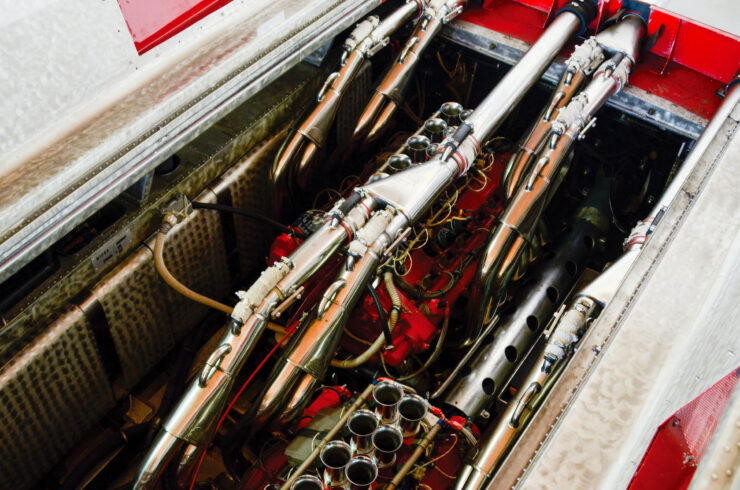 Each of the two 8.2 liter Lamborghini V12s produces 720 bhp, giving 1440 bhp in total, and a top speed capable of winning the 1984 World Championship.

The Mimrans invested heavily into the company, reworking the Countach, developing the Jalpa and the LM002, and developing large-capacity marine versions of the legendary Lamborghini V12. The first of these engine was the 8200cc V12 which would be followed by a slightly larger 9300cc version.

The 8.2 liter Lamborghini marine V12 had a 60º bank angle, double overhead cams per bank, four valves per cylinder, an alloy block and heads, seven main bearings, a compression ratio of 11.5:1 and a total weight of 360 kilograms (734 lbs).

This engine was physically too large and heavy to be used in the Countach or the Jalpa, however some reports indicate that a small number of them were fitted to the LM002 “Rambo Lambo” as special orders.

The vessel you see here is likely one of the first major boats to receive a marine V12 from Lamborghini, a fitting choice given its name. 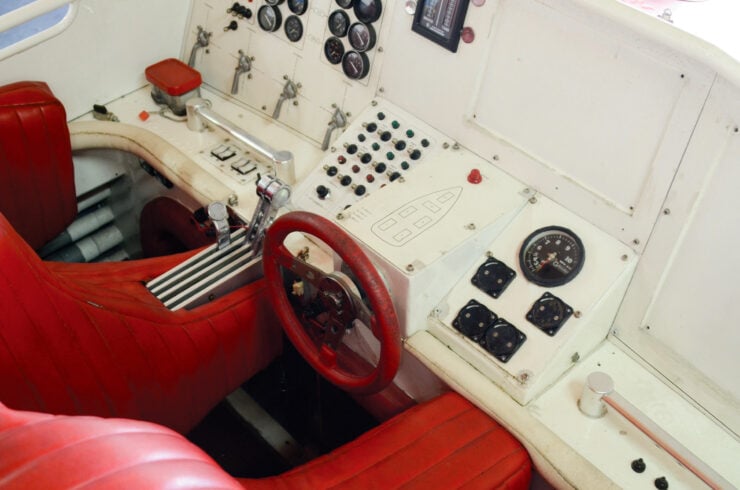 The cockpit has sweating for three with thick upholstery and wrap-around side bolsters to keep the occupants in their seats when bouncing across the water at speed.

It was built in the early 1980s by Italian boatbuilder Cantieri Uniti Viareggio (CUV), it measures in at 38 feet long and it has a deep-vee hull and it’s built entirely from aluminum, with three seats in the cockpit and a central driving position for the skipper.

The original V8 MerCruiser engines were replaced with Lamborghini V12s early in its life, giving it a total of 1440 hp. The Miura would be piloted by relative newcomer Alberto Petri in 1984, he won the European Championship trials in Viareggio before winning the World Championship title in 1984.

The boat is now due to be offered for sale by RM Sotheby’s on the 19th of November in France, at the time of writing there’s no price guide listed, however this vessel did fetch over €100,000 when it was last sold in 2016. 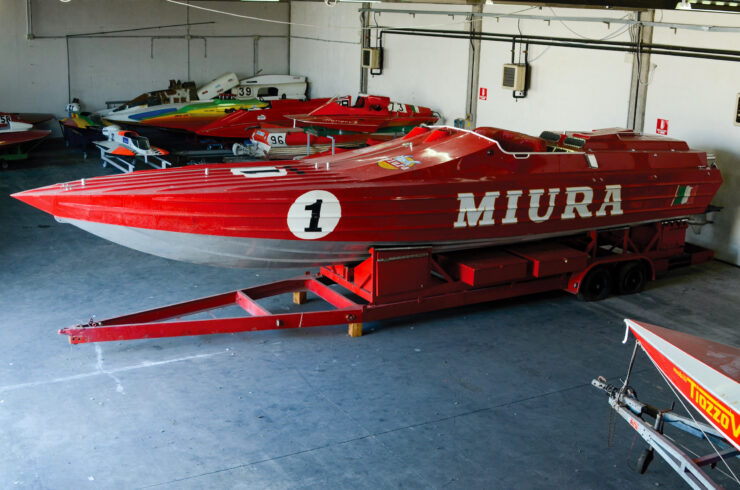 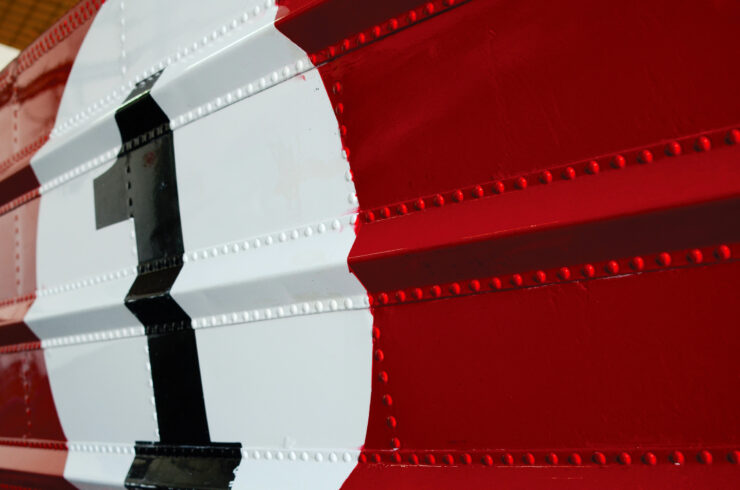 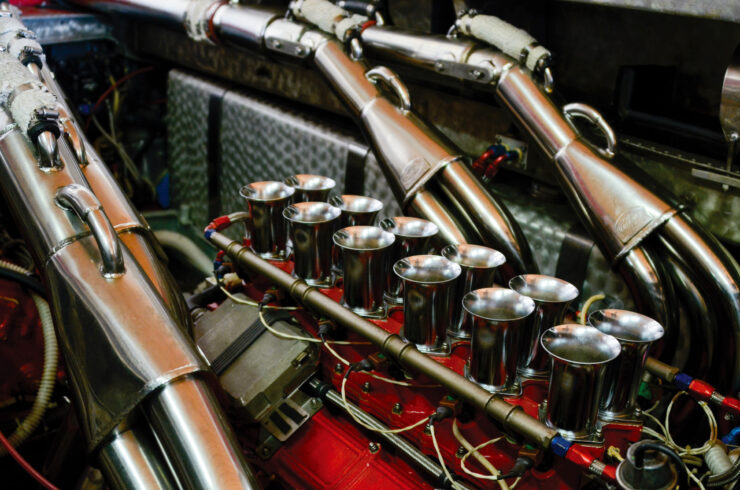 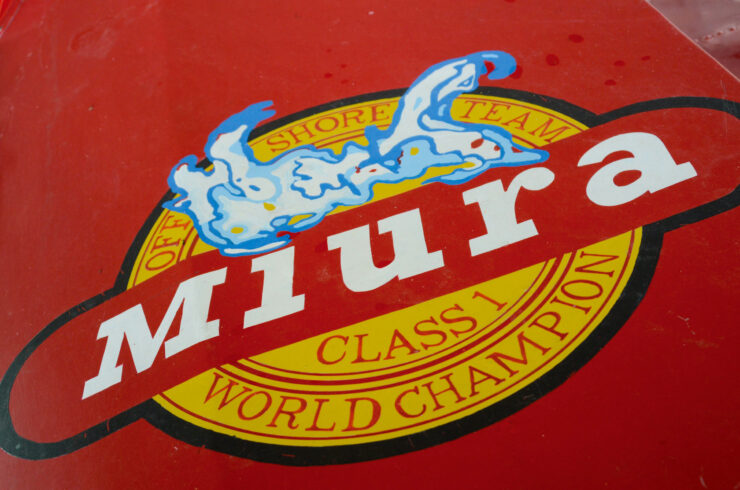 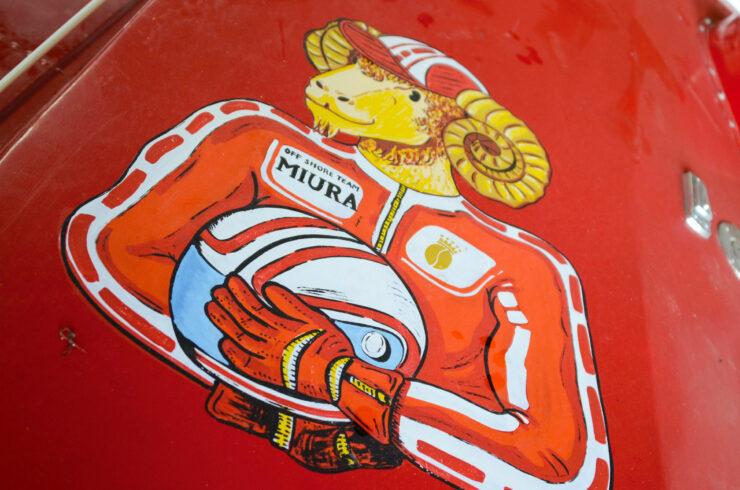 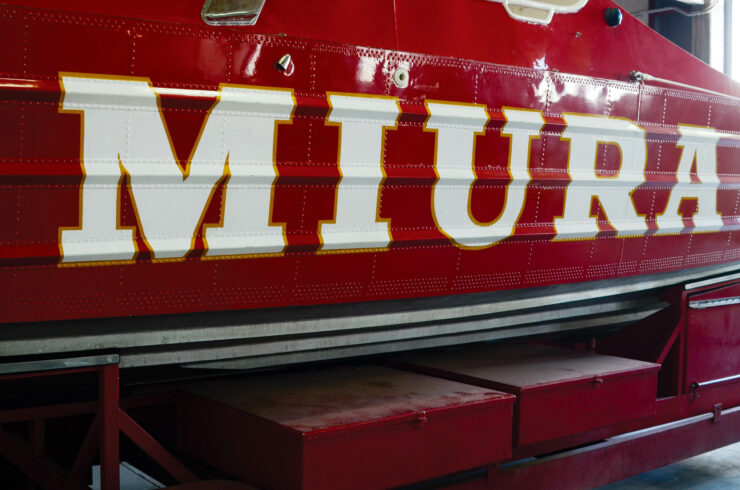 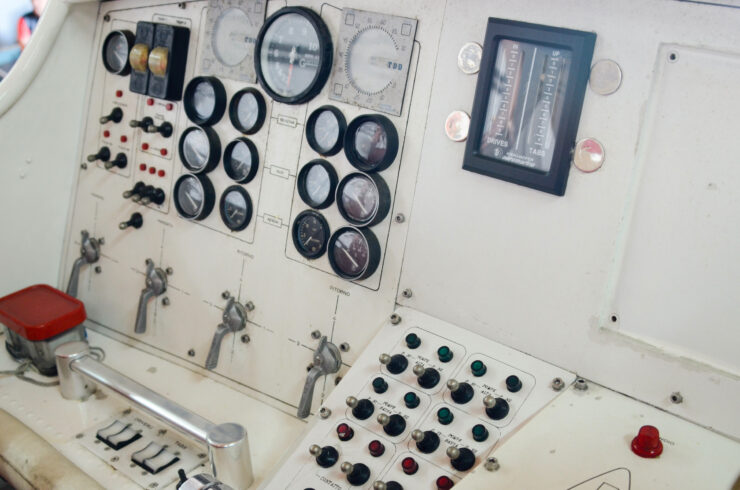 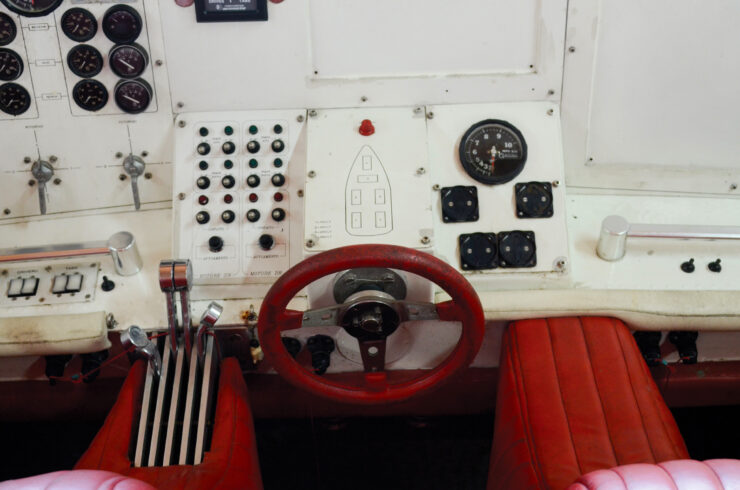 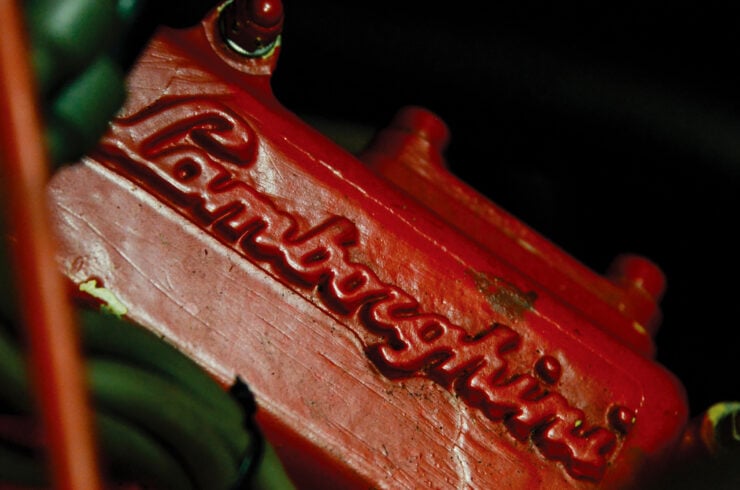 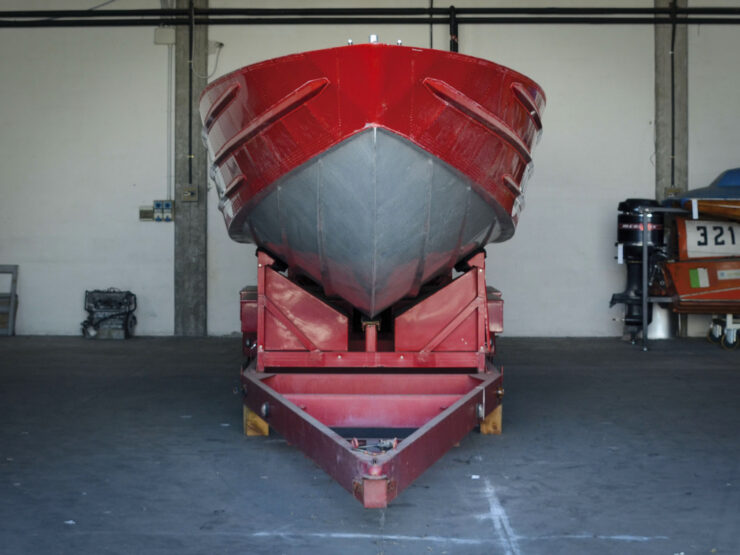 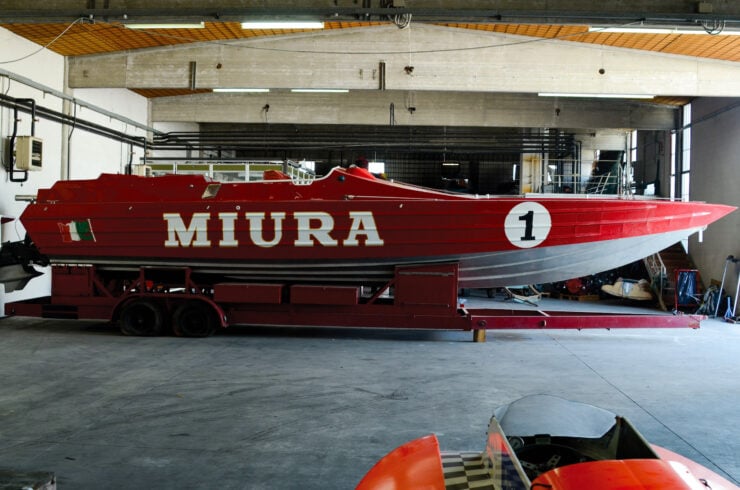 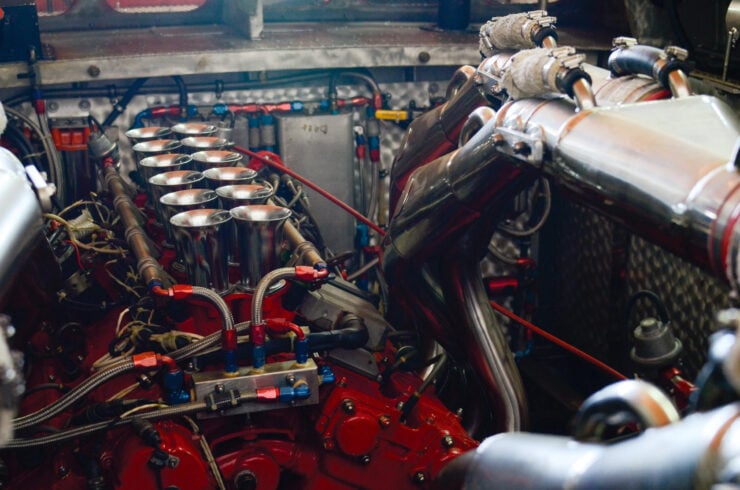