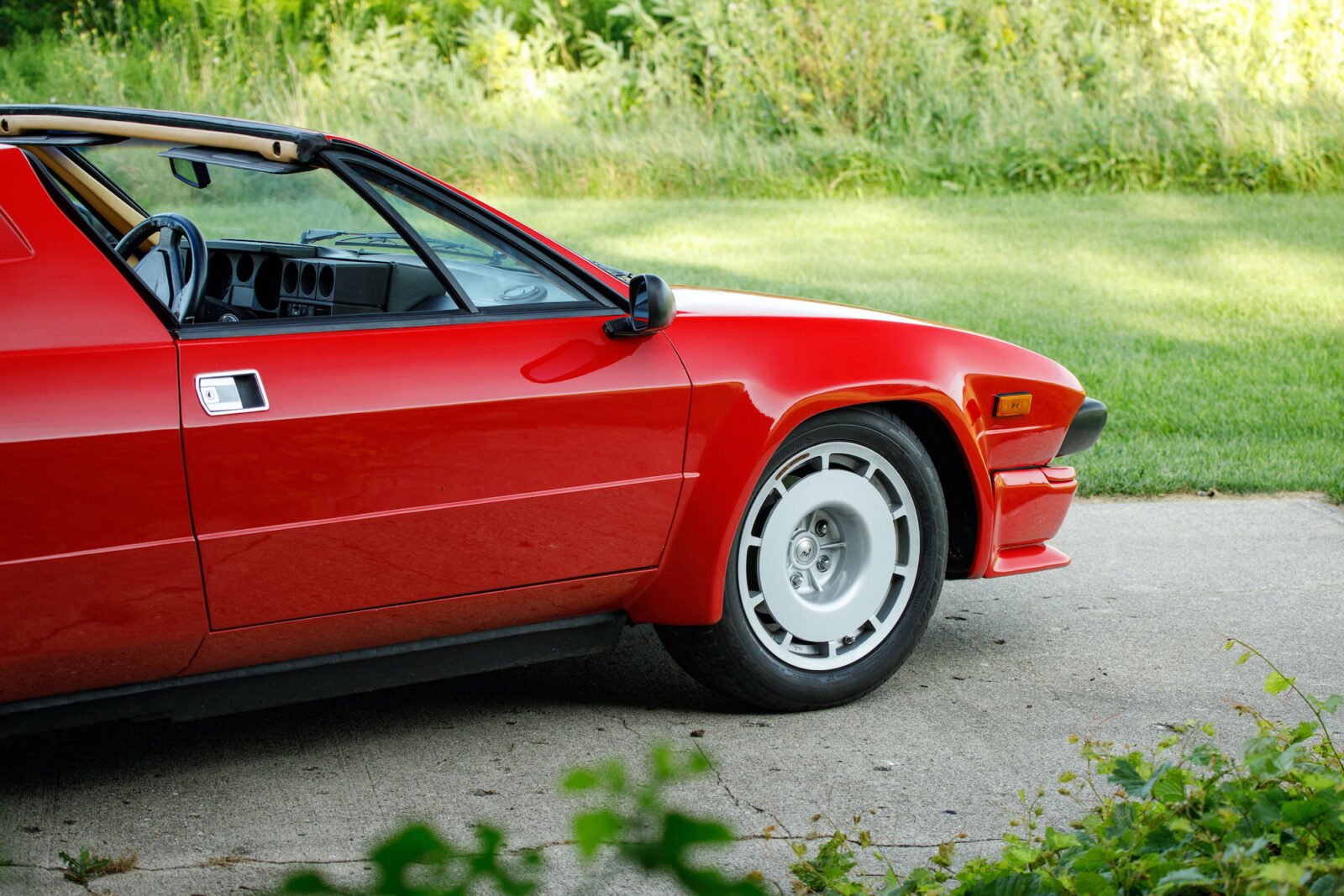 When the Lamborghini Jalpa was first shown to the world alongside the Lamborghini LM001 super SUV at the 1981 Geneva Motor Show the fate of the company was resting on its shoulders.

Lamborghini had been in dire financial straights in the late 1970s and this new model was hoped to have a wider appeal than the range-topping Lamborghini Countach, due to the fact that it was more affordable and easier to drive.

The Jalpa: A Brother For The Countach

The Lamborghini Countach had been released in 1974 to a shocked global audience, the future had arrived with a V12 roar and other automakers rushed to catch up. 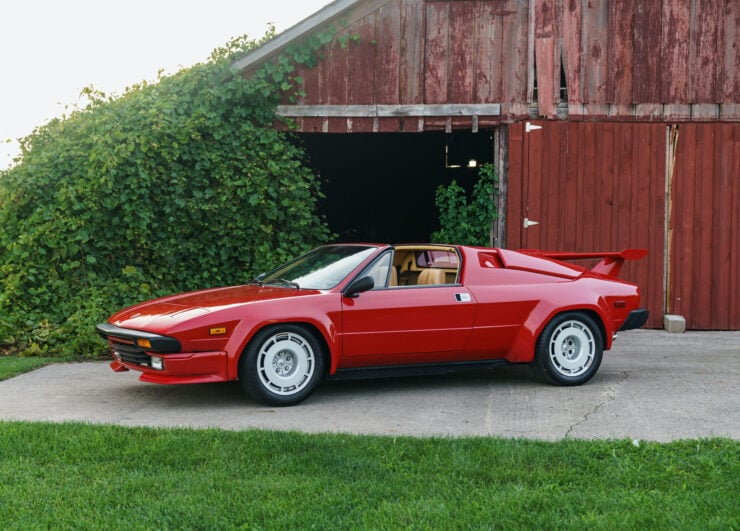 The styling of the Jalpa is unmistakably a Lamborghini creation, taking many cues from the earlier Gandini-designed Countach and from the Silhouette.

So advanced was the Marcello Gandini design of the Countach that it would stay in production from 1974 until 1990 with occasional updates including a rear wing, wheel arch extensions, a front lip spoiler, and other body accoutrements.

In 1976 the Lamborghini Silhouette was introduced to fill the market segment below the Countach, however due to the severe financial distress that Lamborghini was in at the time just 54 of them were made.

The core design of the Silhouette was deemed a good starting point for a new model named the Jalpa after the “Jalpa Kandachia” – breed of fighting bulls.

The vehicle was developed under the leadership of Giulio Alfieri at Carrozzeria Bertone and it featured very clear references to both the earlier Silhouette and the later examples of the Countach – there was no mistaking this model for anything other than a Lamborghini of the 1980s.

Unlike the Countach which was famously challenging to get in and out of and almost impossible to reverse without opening the door and sitting on the sill, the Jalpa was considerably easier to drive on a regular basis, with some owners using them daily.

The Jalpa went on sale in 1981 at a critical time for the Italian automaker, the fact that over 400 of them were sold brought in vitally needed revenue for the company and helped keep it afloat into the 1990s and onto the present day.

The lower original purchase price and the fact that the Jalpa sits below the Countach in the Lamborghini model hierarchy means that it’s been overlooked by many collectors and prices have remained far lower than its V12 engined siblings. 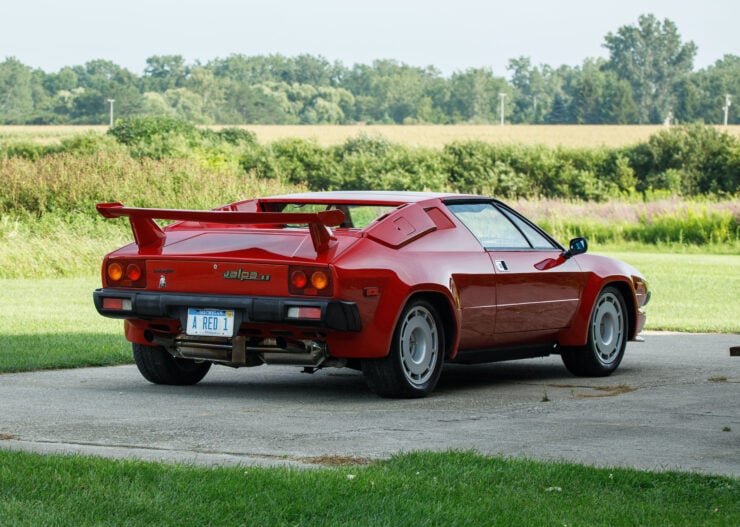 The car has a rear-mid mounted transverse V8 powering the rear wheels and seating for two inside.

Values have been on the rise however it’s still possible to buy an excellent example for under $90,000 USD with cars requiring some work still selling for around $50,000 USD.

The Jalpa used an enlarged version of the alloy V8 from the Silhouette, now with a capacity of 3.5 liters and 255 hp at 7,500 and 225 lb ft of torque at 4,000 rpm. American cars had to adhere to more strict emissions regulations, but they only lost approximately 5 hp when compared to cars delivered in Europe.

The Lamborghini V8 was designed by Gian Paolo Dallara, it has a bank angle of 90º, double overhead cams per bank, two valves per cylinder, four downdraft Weber carburetors, and an alloy crankcase and heads.

This was only the second engine developed at Lamborghini after the original V12, and after being used in the Jalpa Lamborghini wouldn’t use another V8 engine again for decades until the release of the Urus SUV in 2018.

Power from the transversely mid-mounted V8 was sent to the rear wheels via a 5-speed manual transmission and it was used in displacements from 2.0 to 3.5 liters in a number of Lamborghini models including the Urraco, Silhouette, and Jalpa. 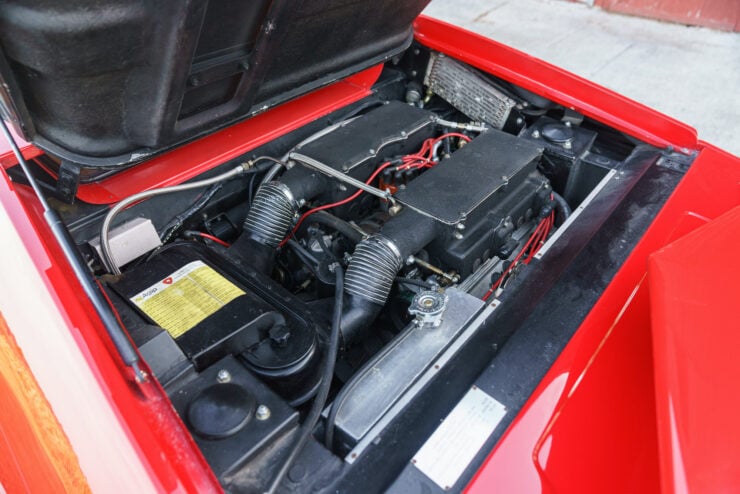 The Jalpa uses a modified version of the steel monocoque chassis from the Silhouette, and it has the same suspension layout including MacPherson struts with lower A-arms up front and Chapman struts with reversed lower A-arms and trailing arms in the rear. Coil springs and telescopic shock absorbers are used front and back, with anti-sway bars at each end.

Period road tests showed that the Jalpa was capable of doing 0 to 62 mph in 5.8 seconds and achieving a top speed of 155 mph – highly respectable figures for the era.

The car you see here is a 1985 Lamborghini Jalpa P350 GTS finished in red with a tan leather interior. It has a removable targa panel roof, power windows, power four-wheel disc brakes, air-conditioning and a Pioneer stereo.

Koni shock absorbers and a sports exhaust have been fitted and the car comes with the optional rear wing and Michelin Pilot XGT Z4 tires fitted on all four corners to the original Lamborghini alloy wheels.

This car benefited from a major engine servicing in September 2007 which included an upper engine rebuild, stainless steel valves, a new clutch, alternator, plug wires and seals, and many more maintenance items. 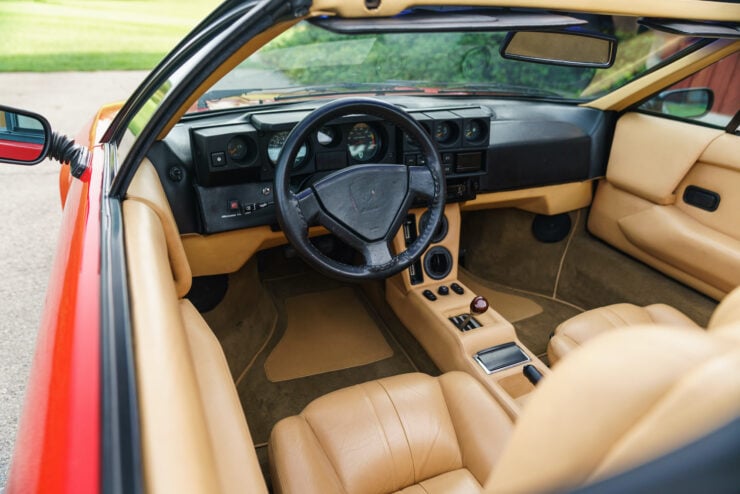 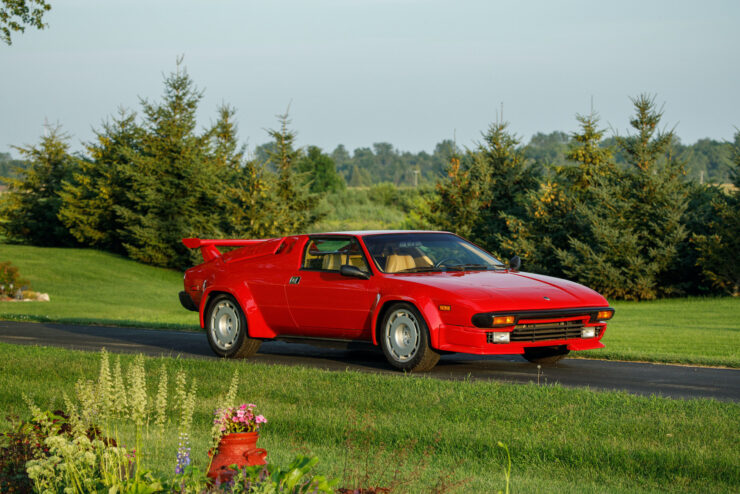 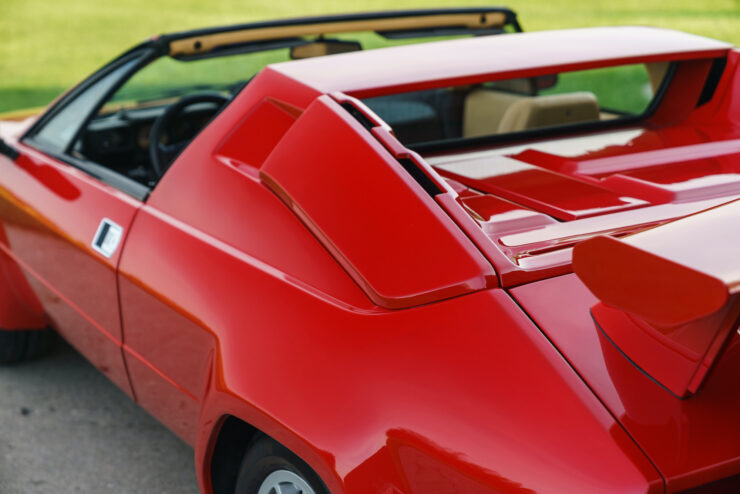 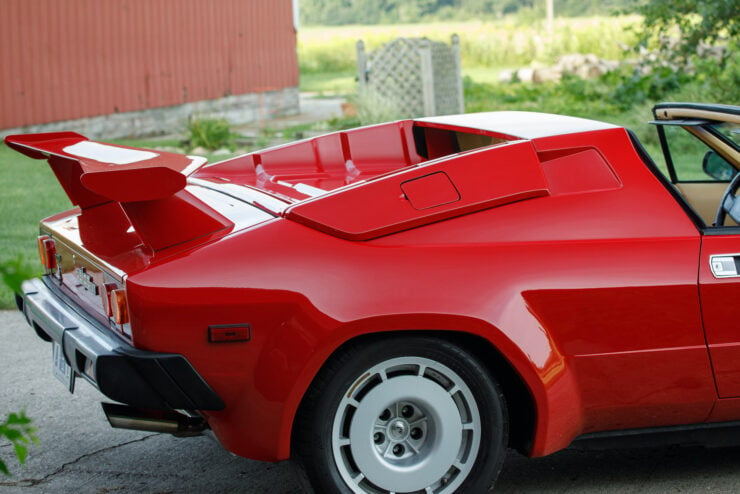 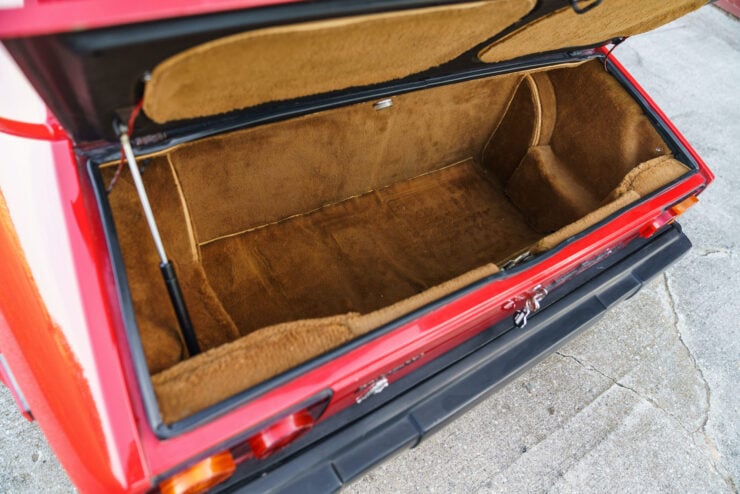 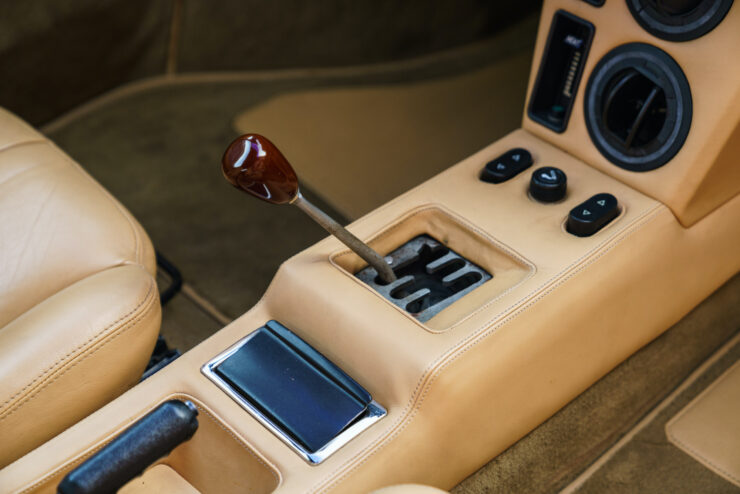 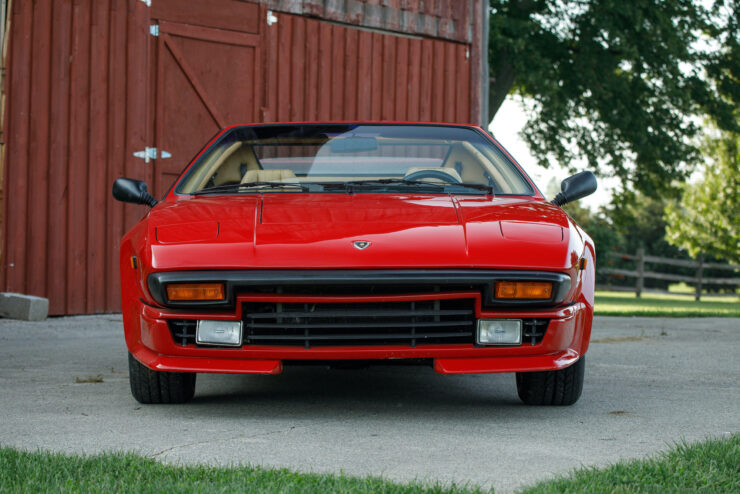 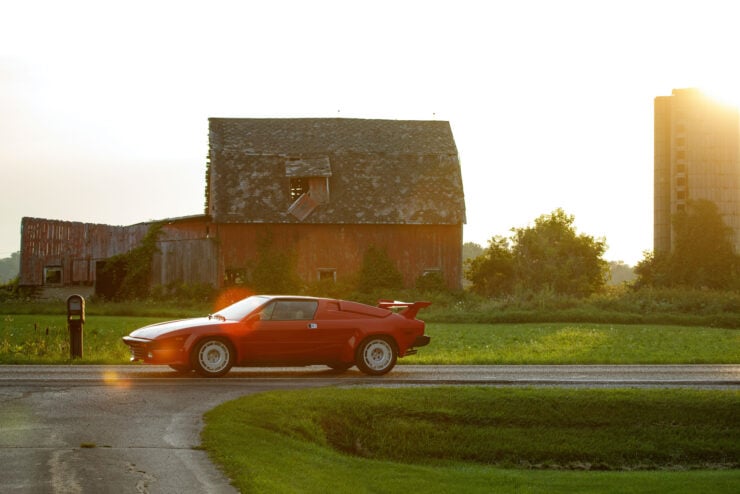 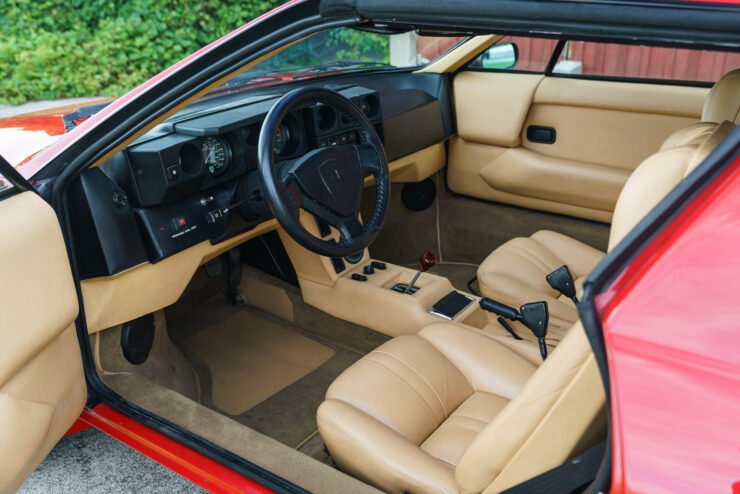 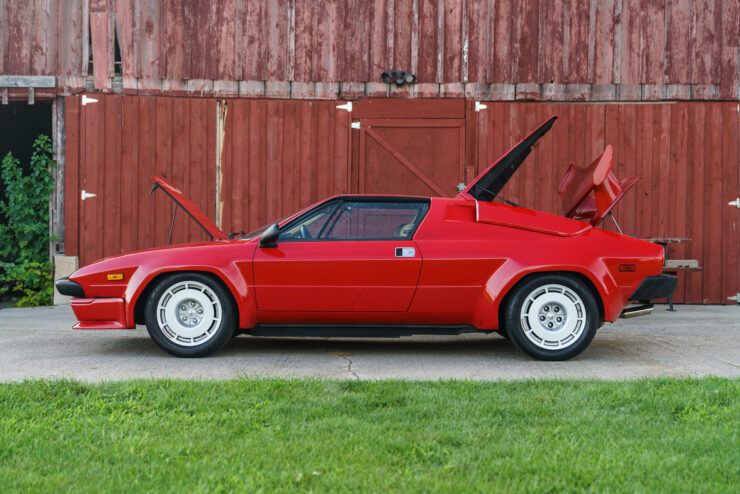