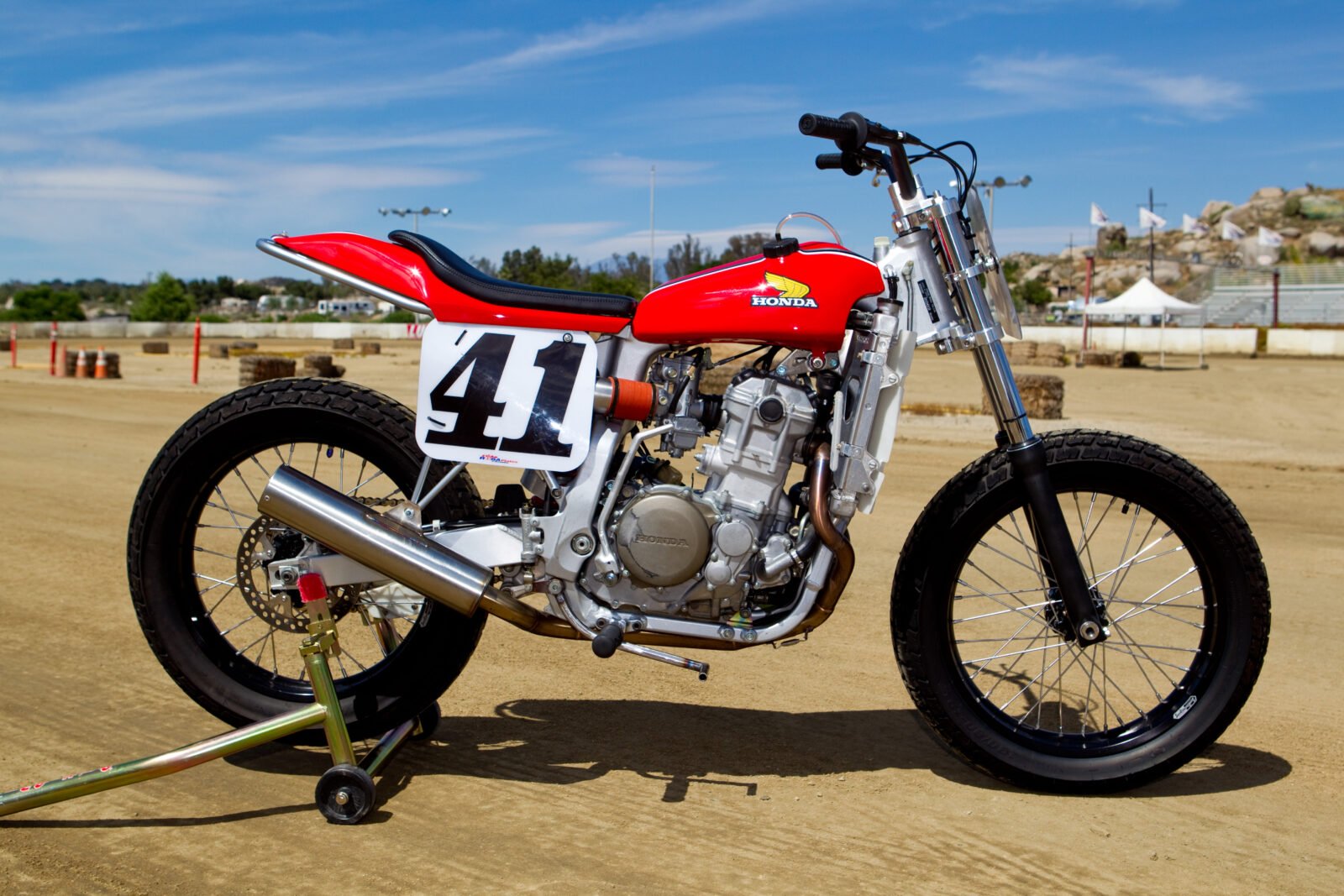 This article was written by Richard Pollock, the founder of Mule Motorcycles – When possible we like to bring you the story of a bike in the words of the people that built it to cut out the middle man and give unfettered insight into their methods and thinking.

My friend Adam Lesley, whom I had previously built a Sportster 1200 Hooligan racer for, approached me with interest in building a flat track “framer” – a framer is a motorcycle with a lightweight frame designed for dirt track racing that doesn’t need a frame able to handle motocross or enduro racing.

Now, Adam is a big guy. 6’5”, 270 lbs, so I try to steer him away from a framer build, as most of the framers would not be suited to his size and most likely could not even be modified to fit him. 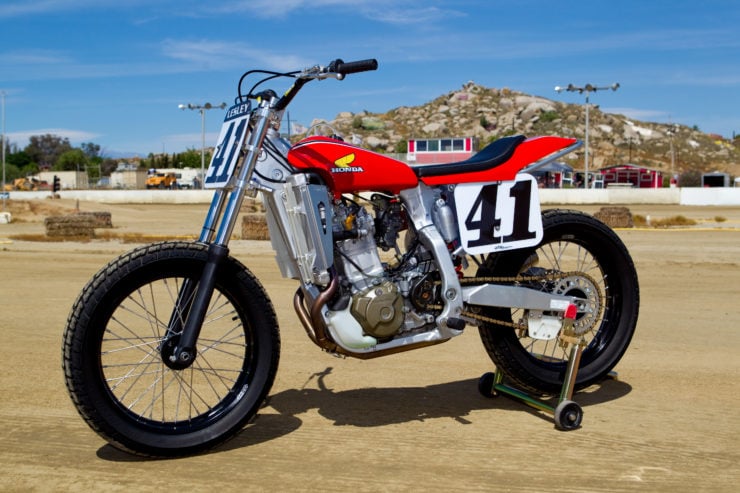 Having successfully built and raced a Honda XR650R (a water-cooled 650), in 2000-2004, and knowing that the bike is physically much bigger than any framer, I convinced a reluctant Adam to go in this direction. Further, I was keen to improve on my 2000 version with what I had learned in the last 20 years of bike building.

Adam sourced a box stock 2002 XR650R unit with almost zero hours on it, from a business partner and dropped it off. All stock parts that would not be used were removed and returned to Adam, leaving only the core bike.

The complete, heavy, stock front end was also removed and replaced with a set of Weiss flat track triple clamps and Honda Hawk NT650 41mm forks. Chosen for their length and light weight, stiffer Racetech springs were installed. The sliders were extensively trimmed and powdercoated. A custom fork stop plate was fabbed up to allow lots of fork lock for its intended flattrack usage. 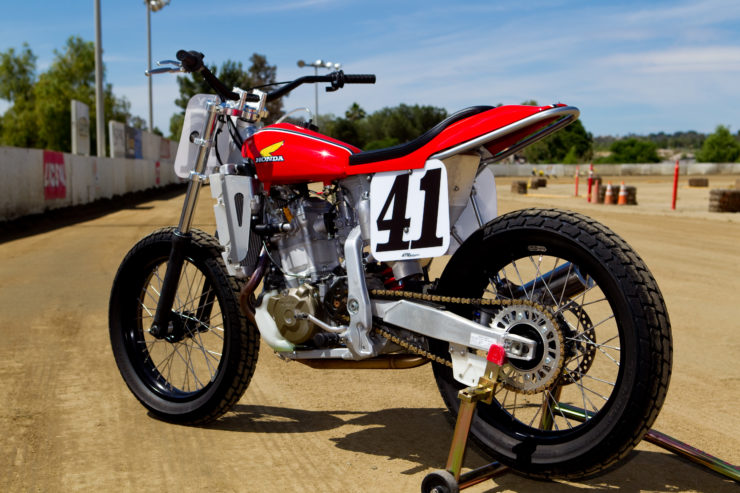 Out back, a widened Champion style rear loop was bent up, had assorted tubes fitted for mounting and an aluminum inner fender to keep debris from the wheel away from the intake system and shock.

The shock was reworked for the rider’s weight and lowered to the proper height for flattrack. Randy Blevins constructed the beautiful exhaust which gives plenty of clearance and increased power everywhere and easily meets the local track sound limit of 100db with just 96.5db out the noise hole.

A lot of work went into the fuel tank. I acquired a pretty good (only minor dents), 1977 TT500 Yamaha aluminum tank several years ago which I gave to my friend/fabrication/welder/ex-Ascot racer Sal Peluso. I said, “If you get bored and need something to do, see if you can make this beautiful”.

A year or so later after removing the tunnel, the outer shell was perfect, but destined to be put on the shelf for a future project. Fast forward 5 years, the tank would have a new home. With a 1.5” strip removed from the center section, the tank was now considerably narrower. Next, friend Jim Bandelin (Competition Sheetmetal), who has started building some beautiful frames and fuel tanks, volunteered to finish off the tank with a new tunnel and cutouts for the radiator plumbing. 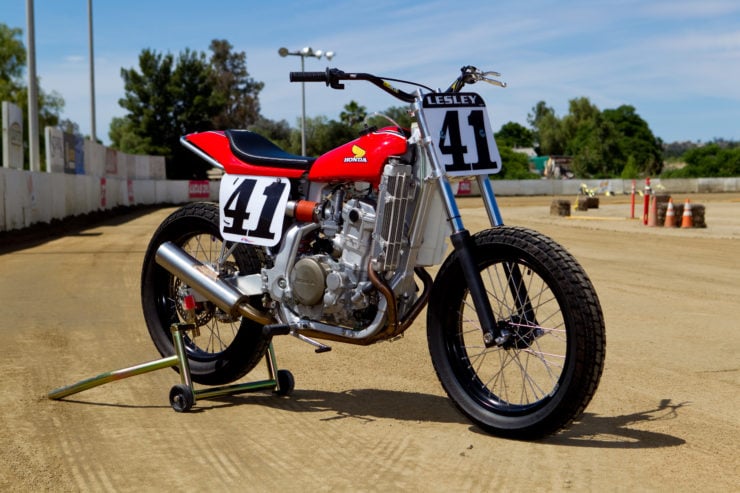 That done and all the detail work addressed, Adam raced the bike in February at The One Moto Show, indoor short track in Portland, Oregon. As the motor was all stock, the decision was then made to “bump” the horsepower! The cylinder head and cylinder were sent to Tom Morgan (Tom Morgan Racing), in Wisconsin. Tom did the head modifications and had the bore increased for a 680cc displacement.

Along with a Megacycle cam and mods to the stock carb, big improvements were achieved! While the motor was apart, Dave Tovar at Superbike paint mixed up and applied the brightest red coating in the world!

The first track test with the motor upgrades revealed that power won’t be an issue ever again. Along with gearing and some other minor tweaks, the 20 year old bike will be extremely competitive. 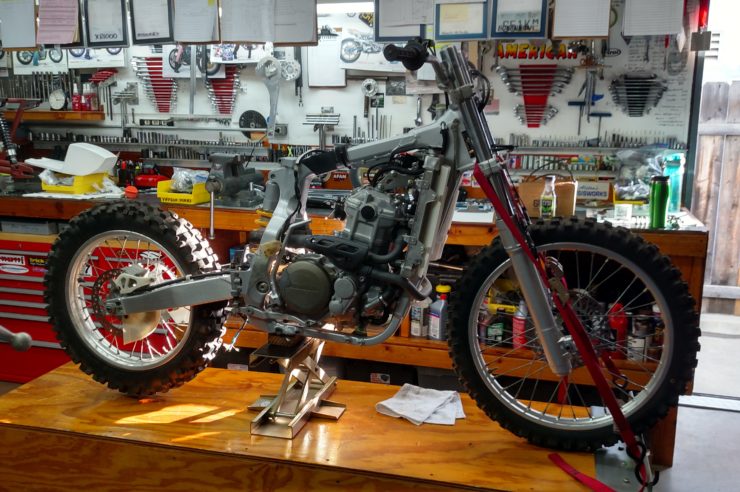 Above Image: The stripped back Honda XR650R before the build commenced – the starting point. 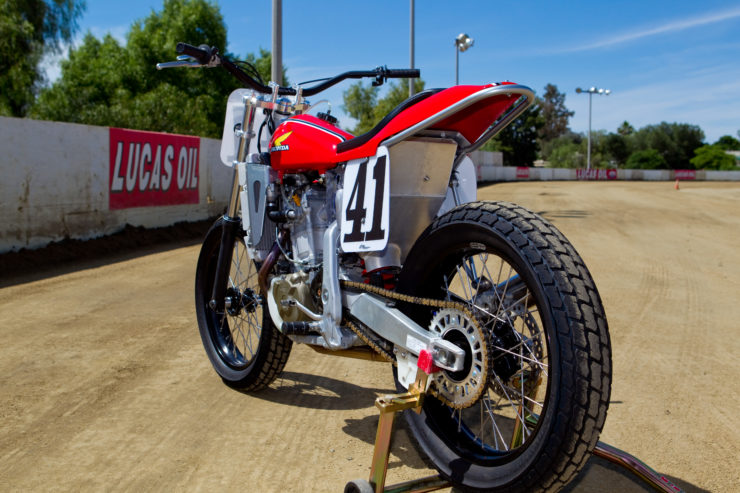 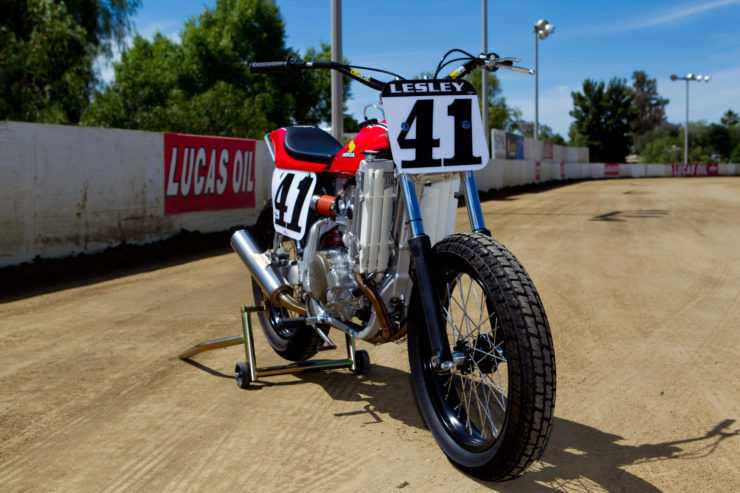 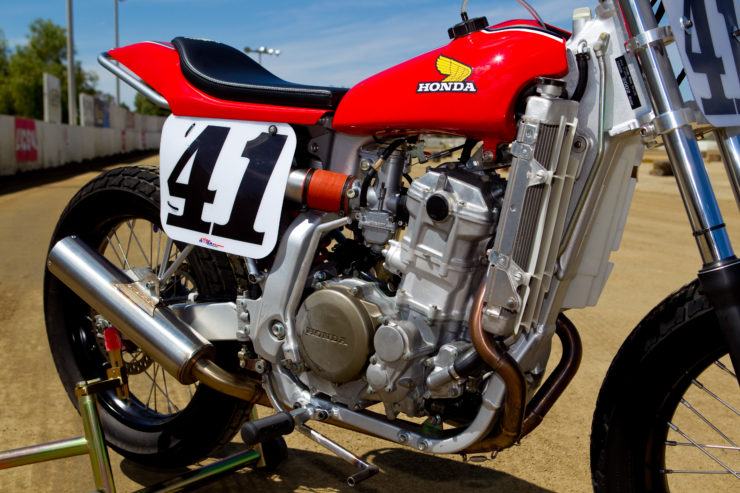 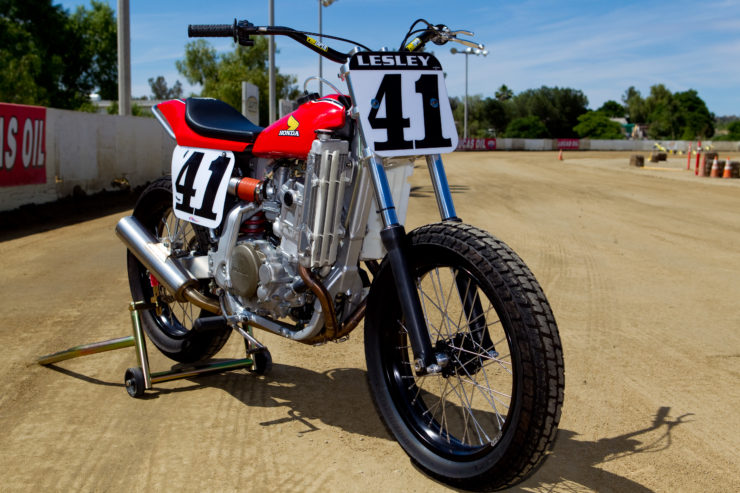 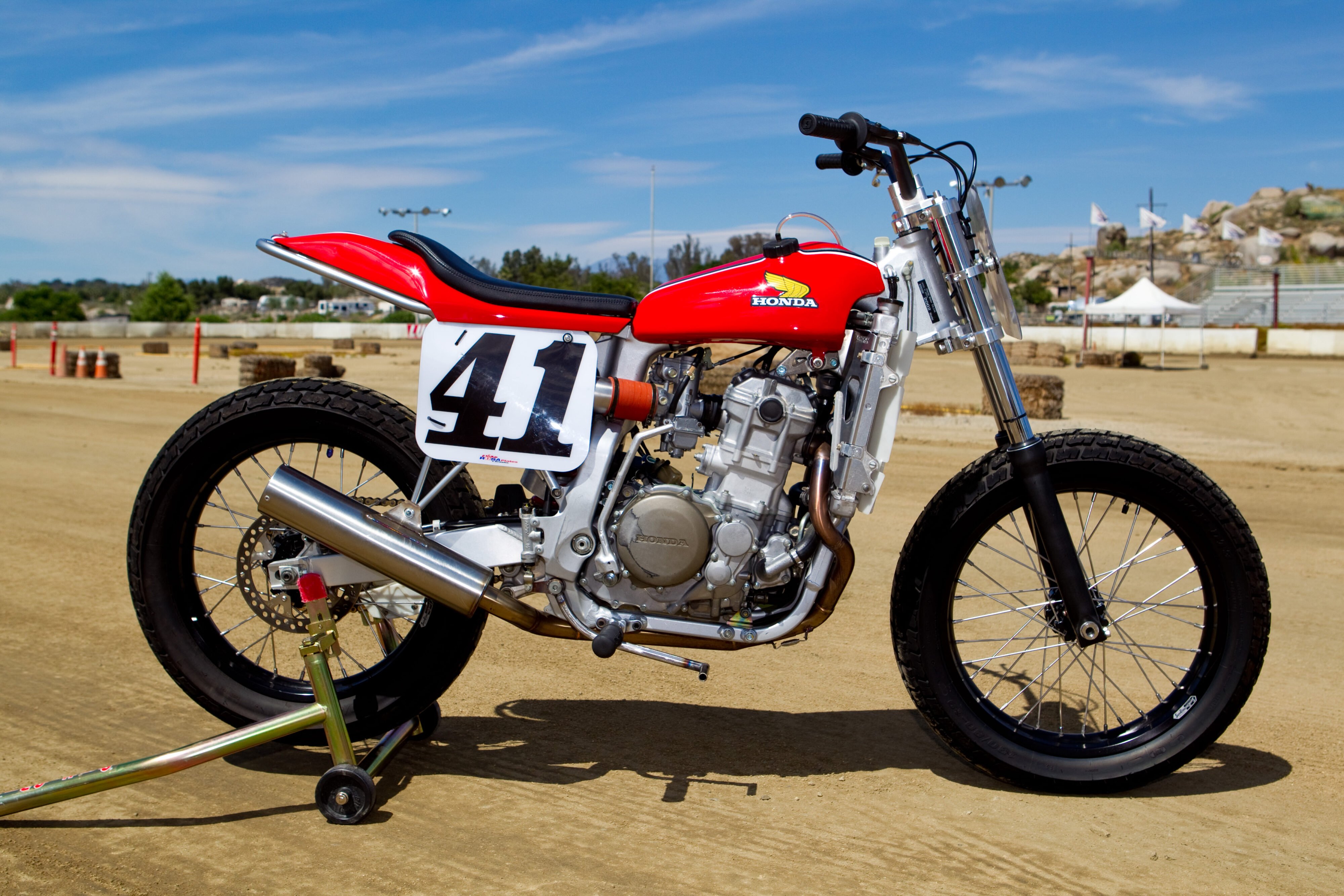