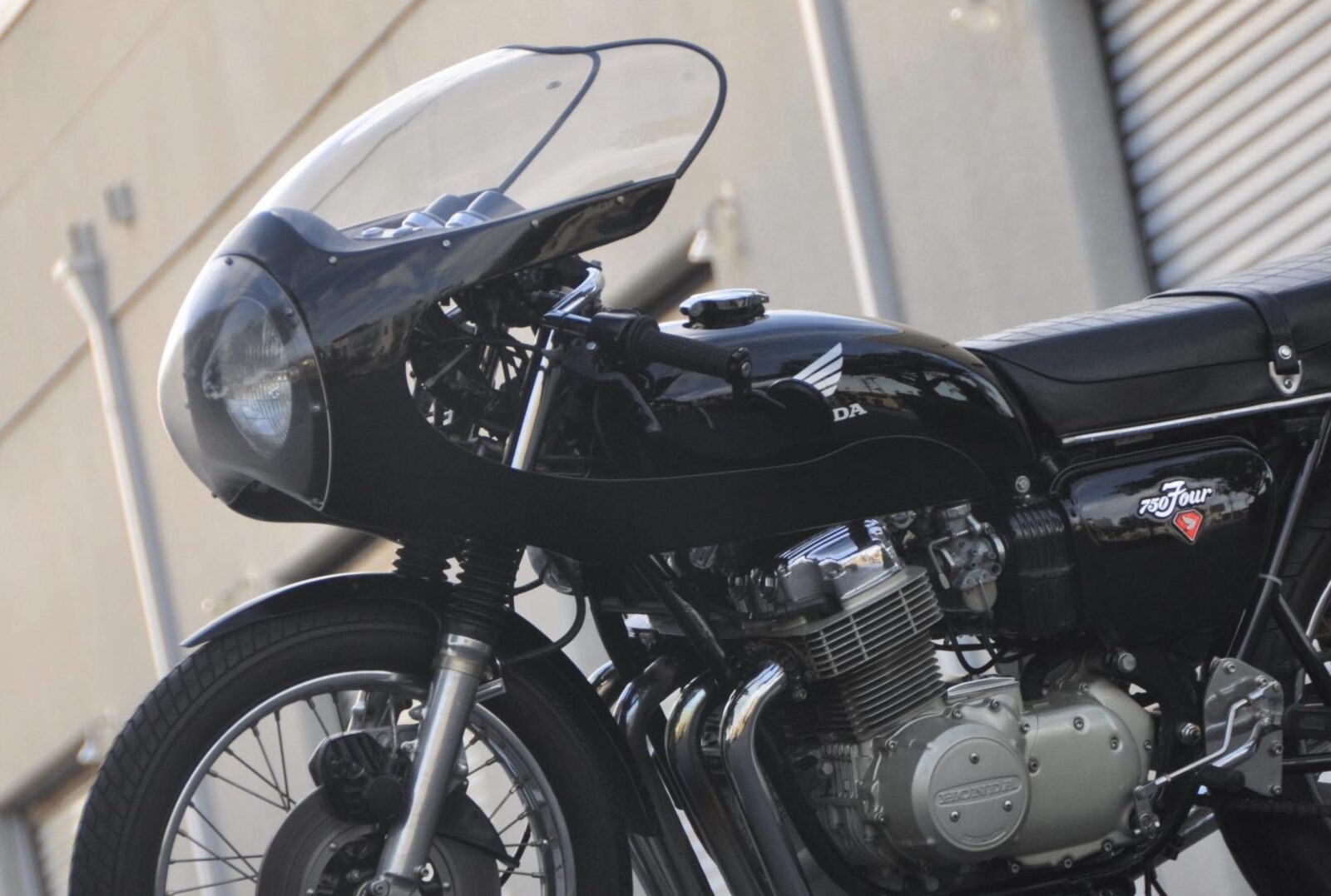 This is one of the most tasteful examples of a Honda CB750 cafe racer that we’ve seen in recent memory, it foregoes the bells and whistles in favour of a clean, minimalist custom build that focuses on authentic ’60s styling.

In the world of motorcycles, cafe racers and Honda CB750s are both exceedingly important milestones. The original cafe racers of the 1950s and 1960s were stripped back machines designed for high performance street riding (and racing) and little else. Not dissimilar to the modern street fighter motorcycle genre. 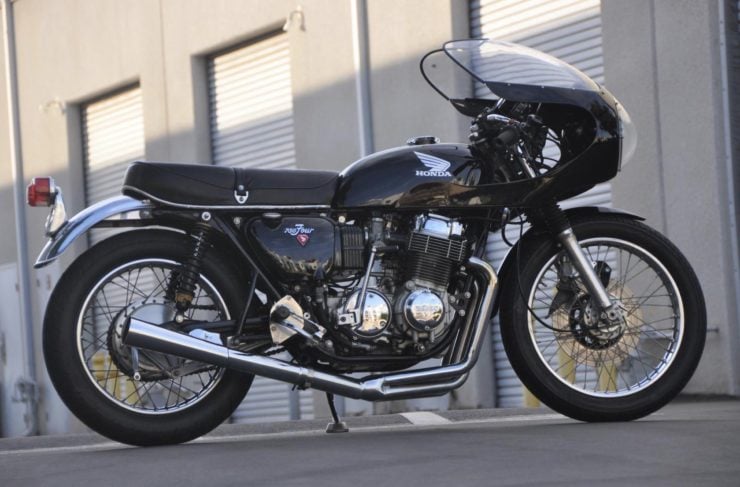 The cafe racer was born in England, young Brits would modify their (mostly British) motorcycles to go as fast as possible, they famously hung out at the 59 Club and the Ace Cafe, but truth be told the cafe racer phenomenon spread quickly around the world to America, Australia, South Africa and beyond.

At the Ace Cafe in London young cafe racers would challenge each other to races around a pre-agreed road circuit, then load a song on the jukebox. The key to success was to get back to the cafe before your rival, and before the song finished playing.

Although the concept of the cafe racer motorcycle has remained popular, it saw a renaissance in the early 2000s. Many modern motorcycles have received the cafe racer treatment but the Honda CB750 remains a popular choice due to the model’s affordability, reliability, and the ease of getting conversion parts. Most cafe racers are characterised by their clip on (or clubman) handlebars, and stripped back design, they also commonly have a single seat with a small rear cowl and knee indents in the fuel tank (Manx style), though these aren’t essential. 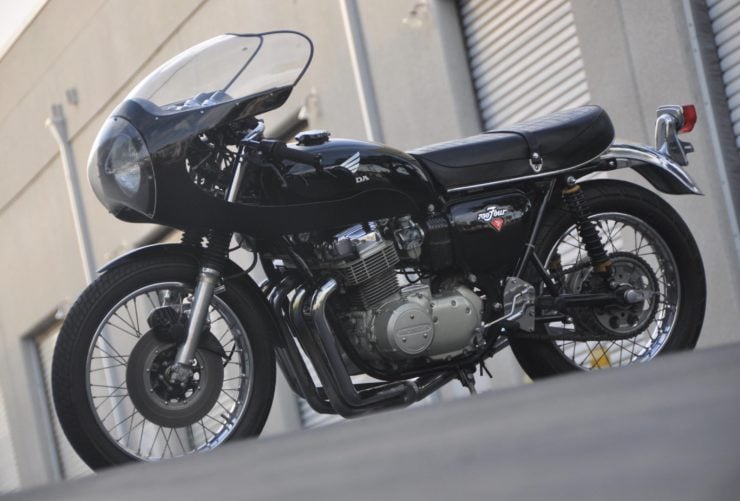 The Honda CB750 is one of the most important motorcycles of the 20th century, it was released in 1969 to meet the demand for a larger-engined motorcycle to better compete with the then-dominant motorcycle marques of Britain, Italy, and America. Honda engineers rolled a slew of modern features into the CB750 including unit construction, a single overhead cam, a horizontally split crankcase (to eliminate oil leaks), a front disc brake, an electric starter, and a comfortable riding position. 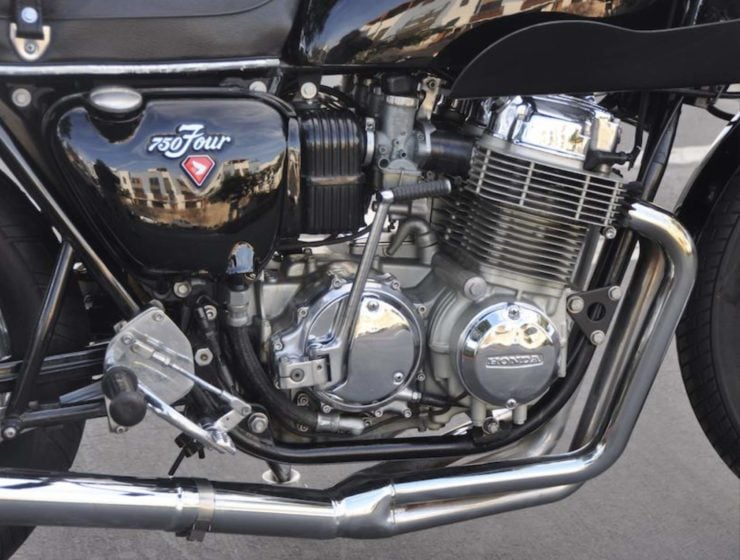 The Honda CB750 cafe racer you see here combines both of the above icons into a single machine, it’s based on a 1973 model that’s been customised into a clean example of a cafe racer. The original fuel tank and seat remain, and there’s a new front bullet fairing, adjustable rear shock absorbers, clubman handlebars, Dunstall rearset footpegs, a Dunstall front fender, and a 4-into-1 performance exhaust.

The bike is tastefully finished in jet black with silver Honda logos on the fuel tank, and period-correct “750 Four” badges on the oil tank and side cover. If you’d like to read more about this Honda or register to bid you can click here to visit the listing on Bonhams, the estimate is $7,500 to $9,000 USD. 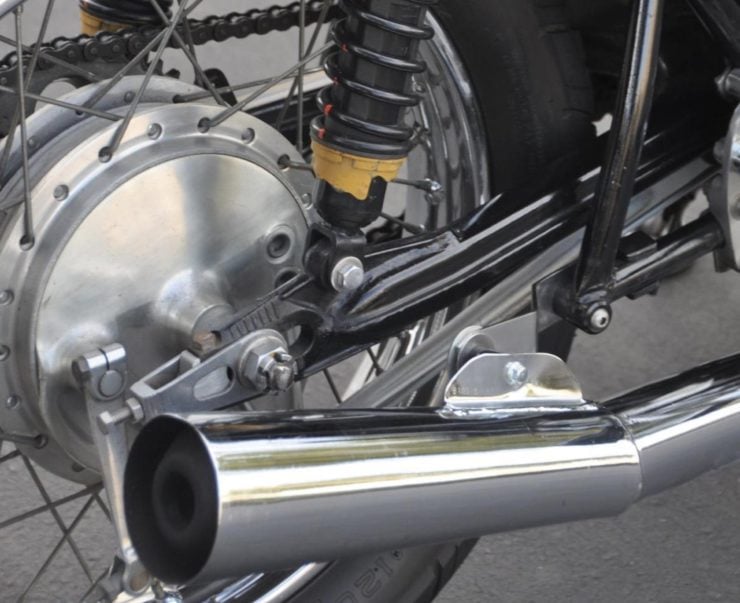 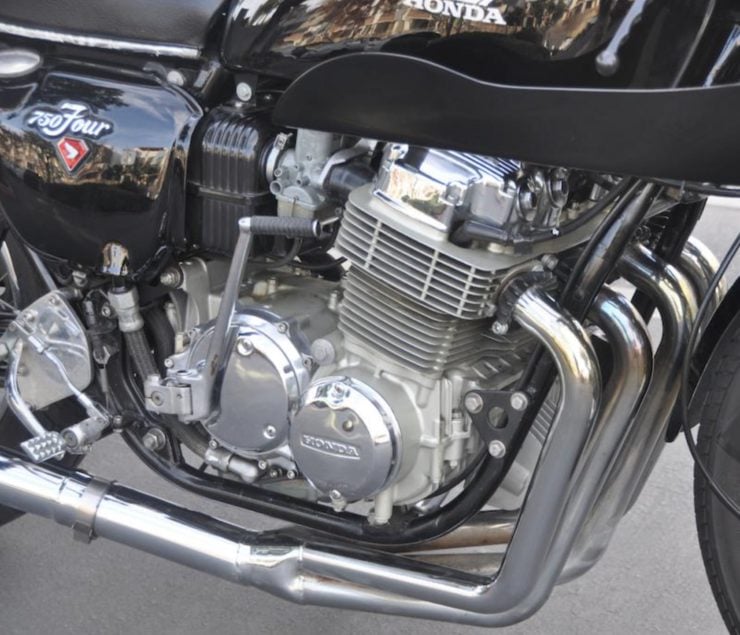 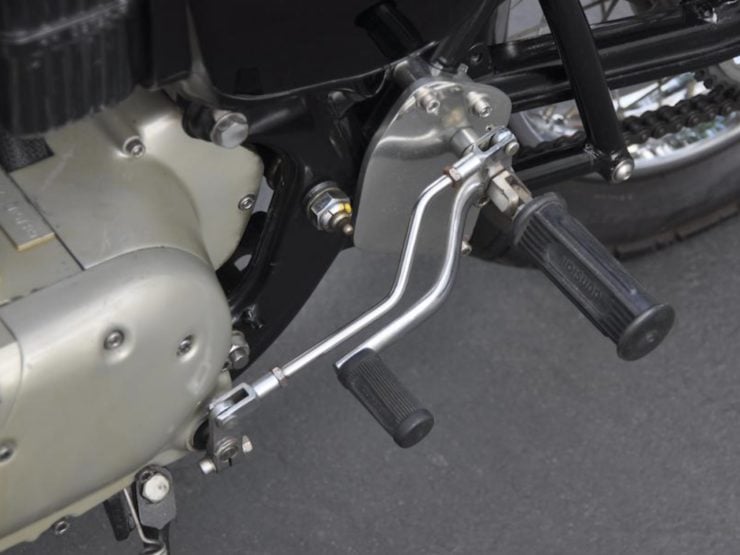 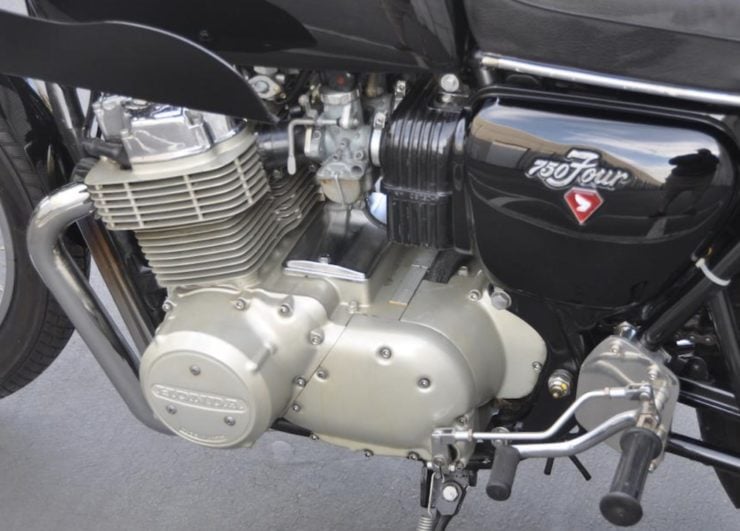 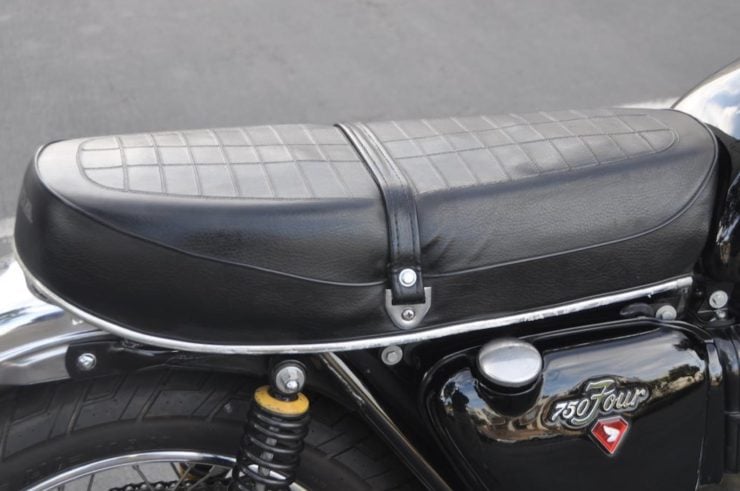 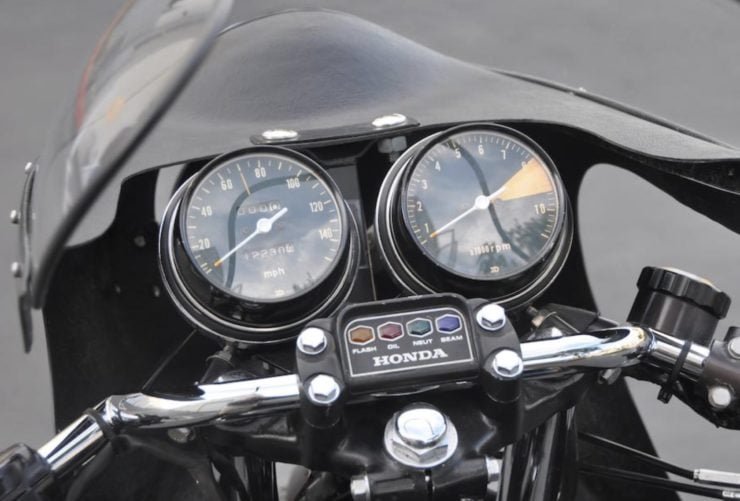 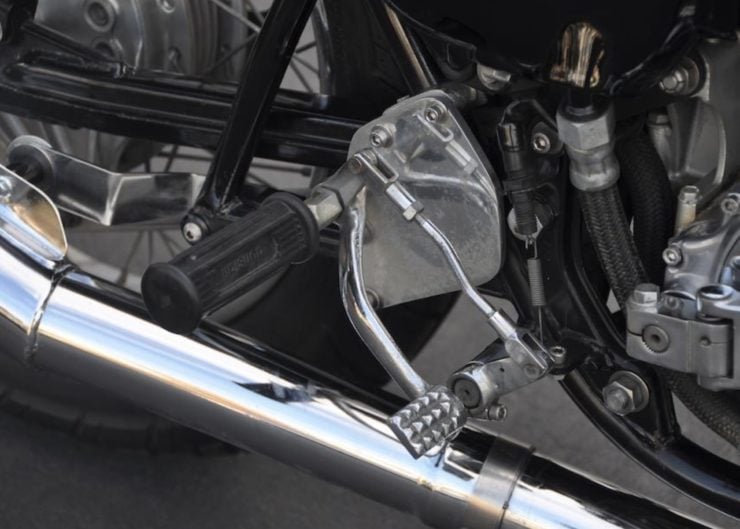 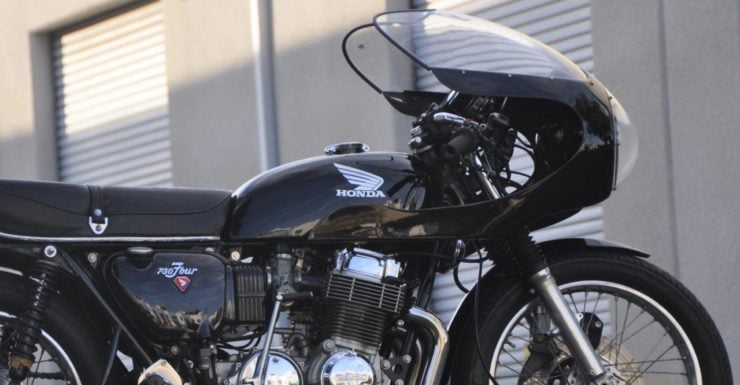 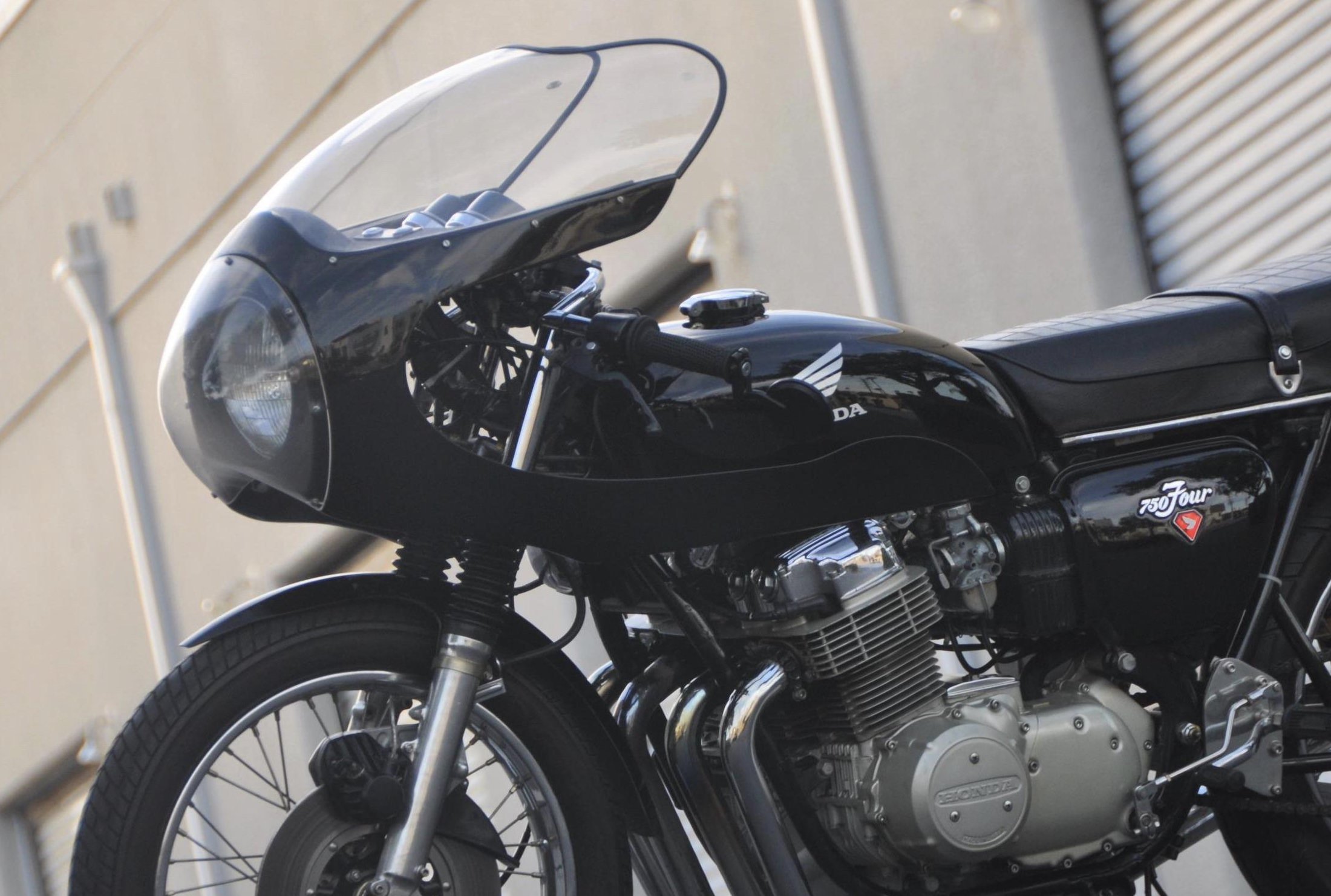