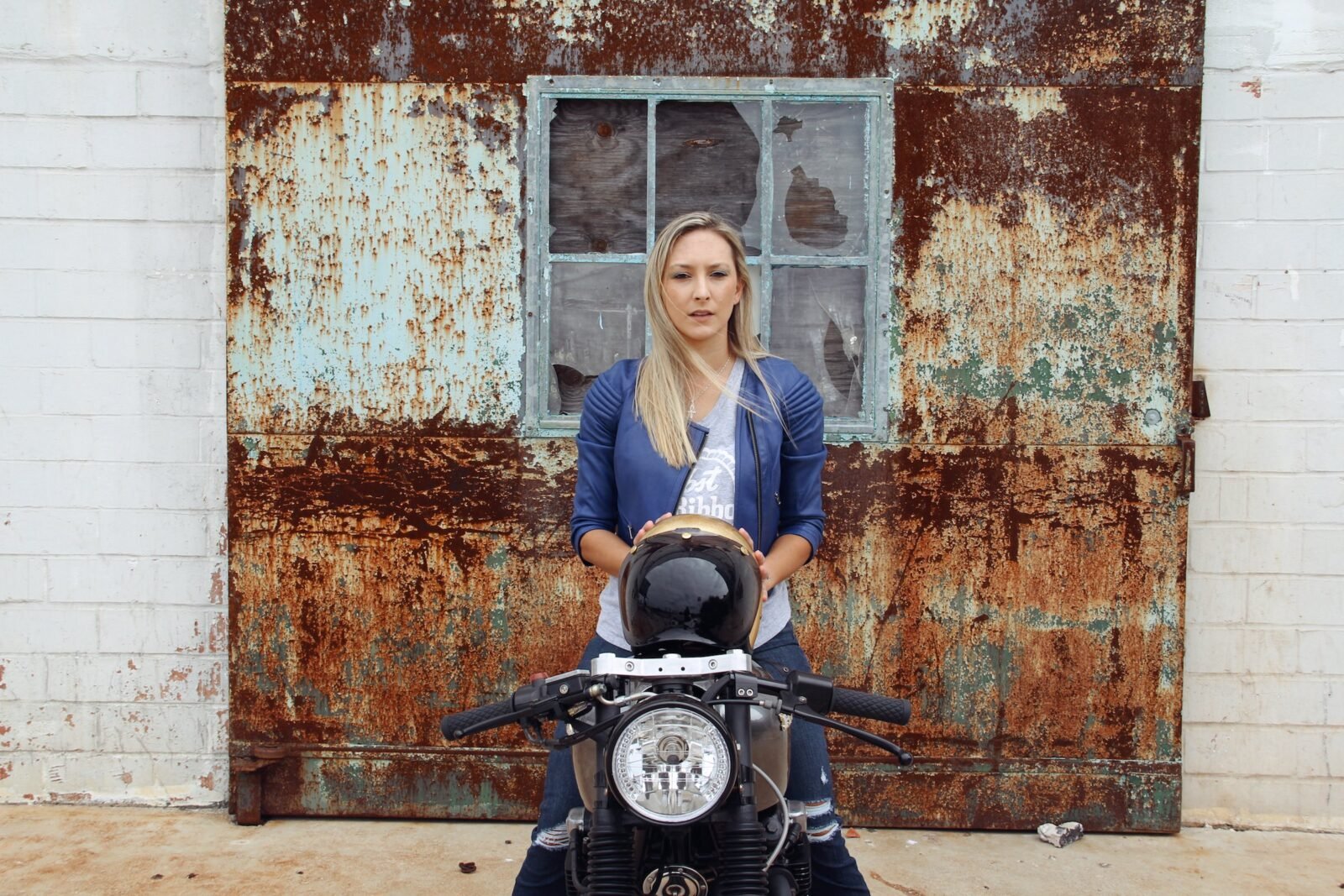 Jennifer and her husband Blake Bailey run the Motobailey Shoe Co. – known for their classically styled, Kevlar-lined leather motorcycle boots. Both Jennifer and Blake are avid motorcyclists, Jennifer started our a few years ago on a Kawasaki Ninja 250 but after becoming friends with Karly Kothmann and seeing her beautifully rebuilt Honda CB550 she knew it was time for her own upgrade.

The Honda CB550 is a motorcycle that sits in the shadow of its larger sibling, the Honda CB750. Anyone who’s ridden both models will tell you that the CB550 feels quite different, and in stock trim the smaller engined bike tends to handle better – although the fact that I’ve just said that means I’m likely to have an inbox full of vitriol from CB750 riders tomorrow morning.

At its heart, the CB550 has an air-cooled inline-4 with a 5-speed gearbox (unit construction), a single overhead cam, 8 valves, a total capacity of 544cc and a power output of 38 hp. It’s very common on custom builds of the CB550 to swap out the stock airbox and exhaust for new less-restrictive aftermarket items – horsepower can be boosted from 38 to well over 50 without too much effort, and higher still with new cams, ported and polished heads, new carburetors, and a full race exhaust.

As a base for a cafe racer, the Honda CB550 is hard to fault – the engine is as reliable as they come, it has a broad powerband, a huge catalogue of aftermarket parts and it won’t break the bank. The potential downsides are mostly related to the somewhat challenging task of synchronizing the four carburetors – a task that some will tell you is almost impossible and others with tell you is simple, and only takes 15 minutes. 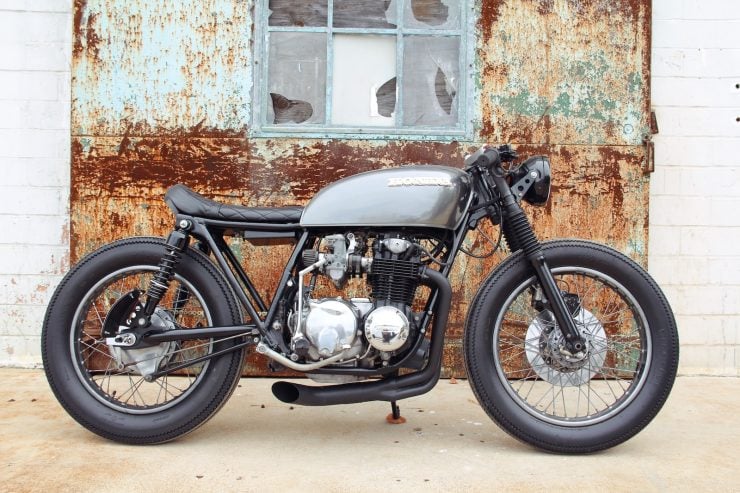 Blake wasted no time in finding a 1974 Honda CB550 for Jennifer, it was a little worse for wear, running on two cylinders and needing a comprehensive rebuild. Work started immediately with a teardown, the rear subframe was chopped and a new one fabricated, with a new seat pan, seat, and low profile running lights.

It took time, but once the engine had been sorted and was running properly, with the carburetors synced and re-jetted, the attention shifted to the aesthetics. The goal was to create a clean, minimalist cafe racer that wasn’t flashy – just functional and fun.

New triple trees were sourced from Dime City Cycles, as well as clip-on handle bars, a new (smaller) headlight, and the tank and wheels were powder-coated in Black Chrome by Overland By Design. A Carpy 4-into-1 exhaust was fitted, with pod filters installed on the carburetors in place of the original airbox.

A new wiring loom was put together with significant input from friends Tyson Carver and Tanner Kothmann, powered by an Anti-Gravity lithium-ion battery, with all the important electrical gear stashed up under the seat in a tray supplied by Cognito Moto.

The completed bike is a daily-ridden custom that can be seen on the streets of New Braunfels, Texas with Jennifer in the hot seat. If you’d like to follow her adventures you can find her here on Instagram, and you can follow her husband Blake here. 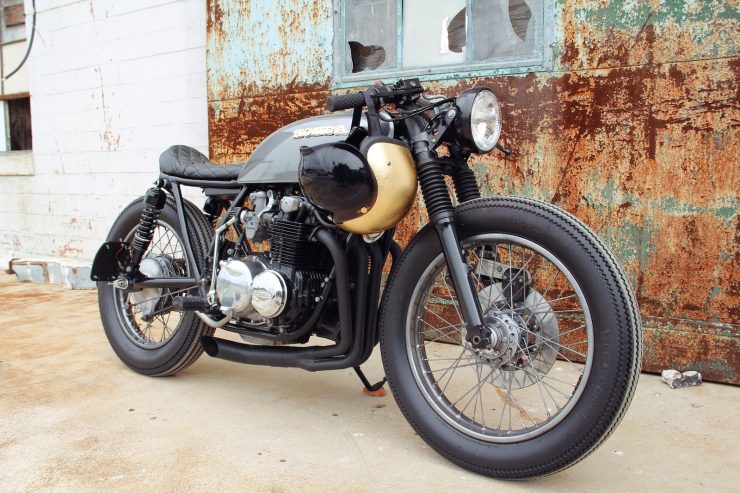 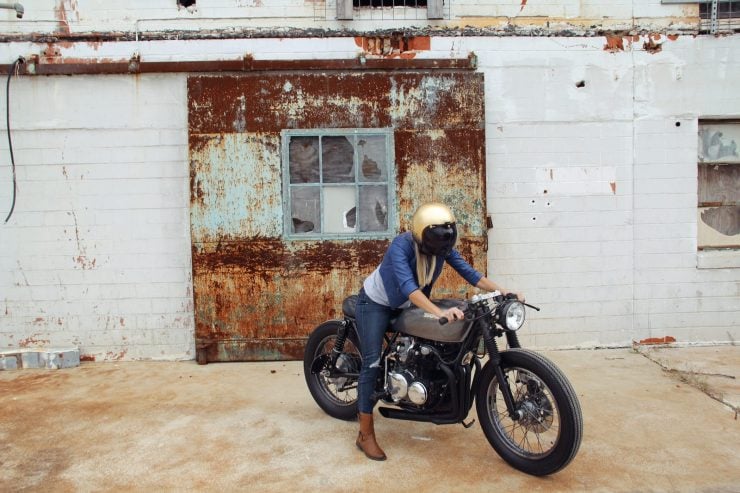 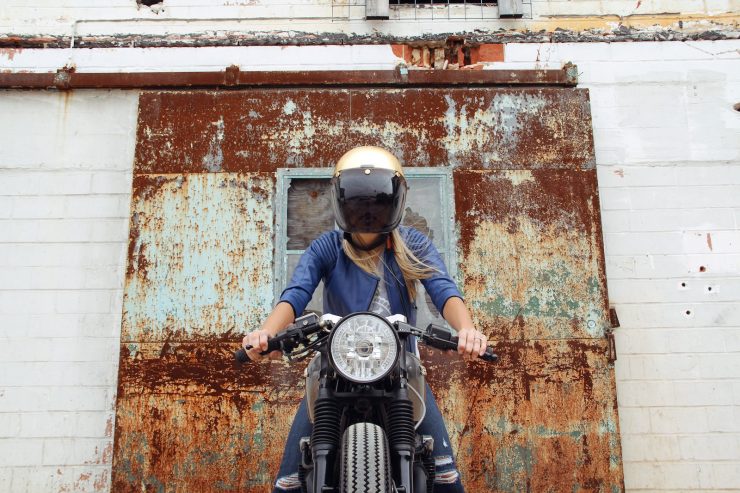 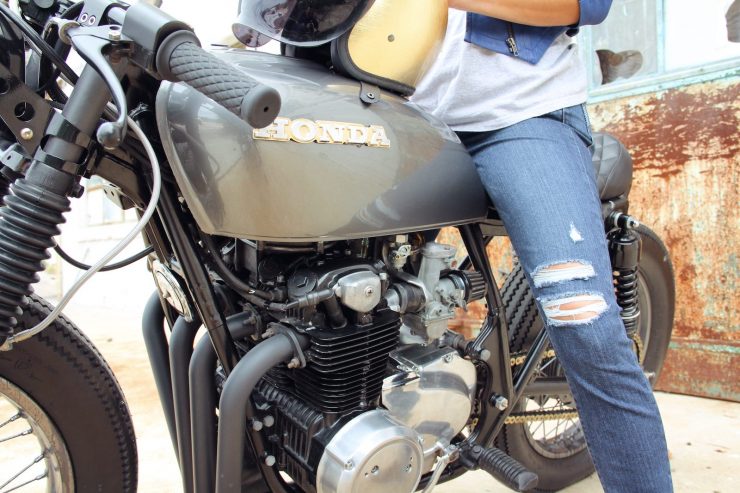 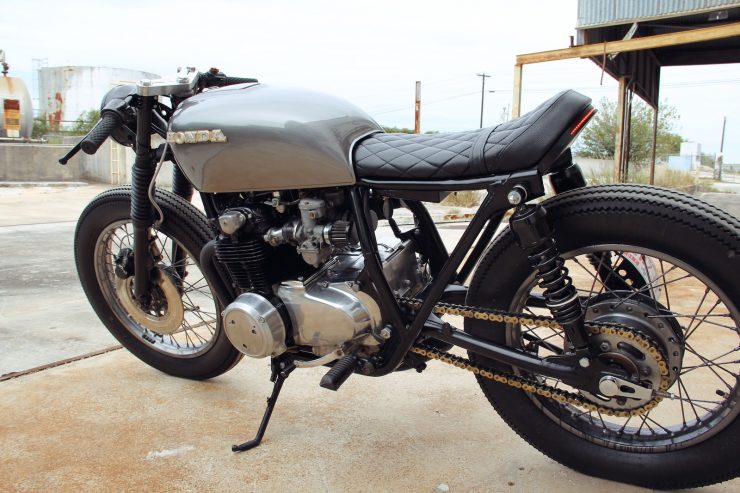 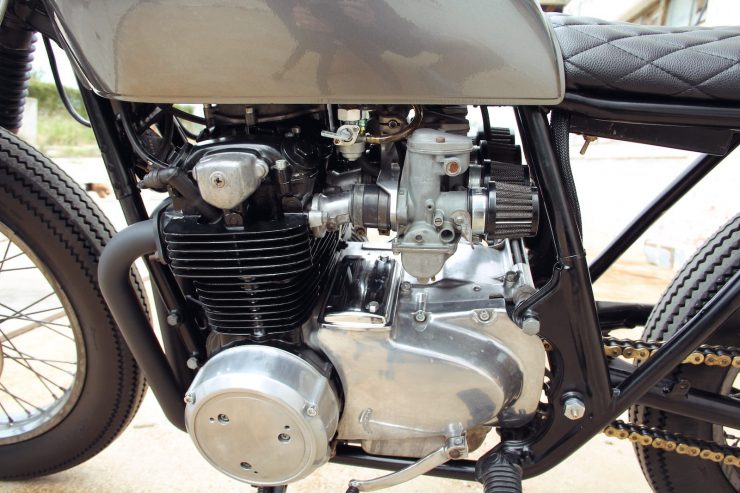 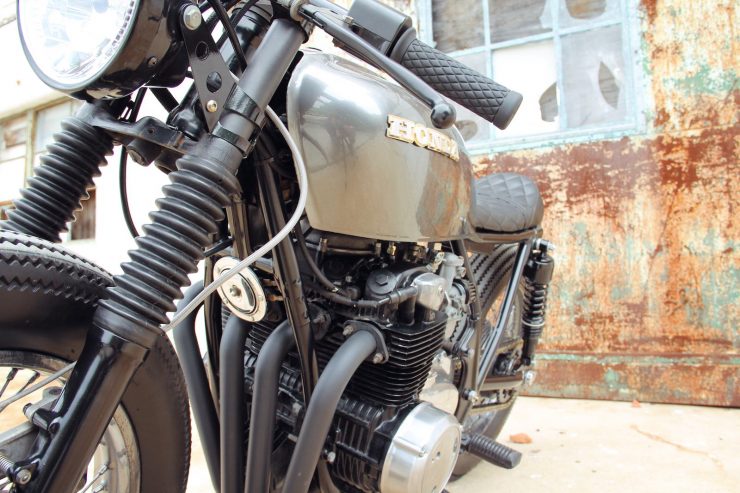 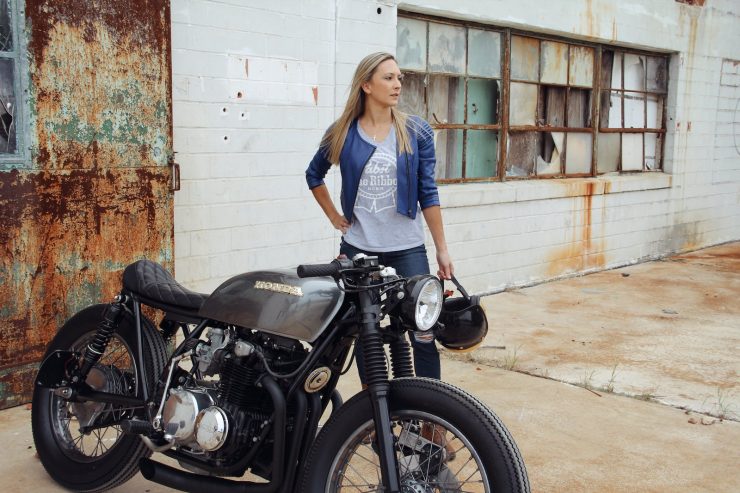 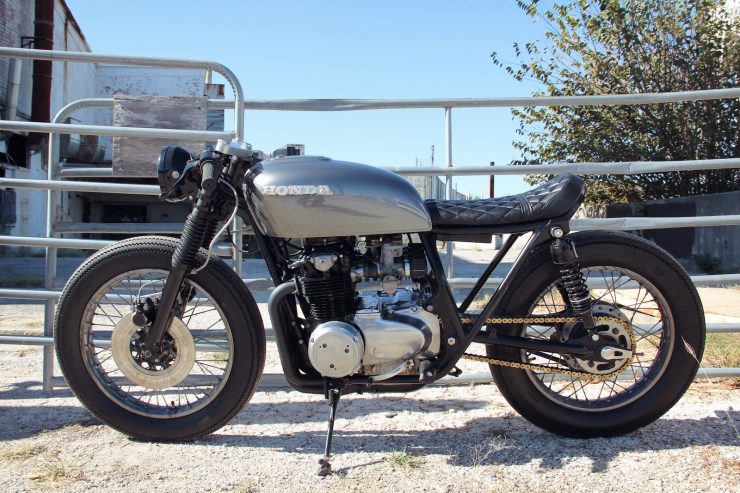 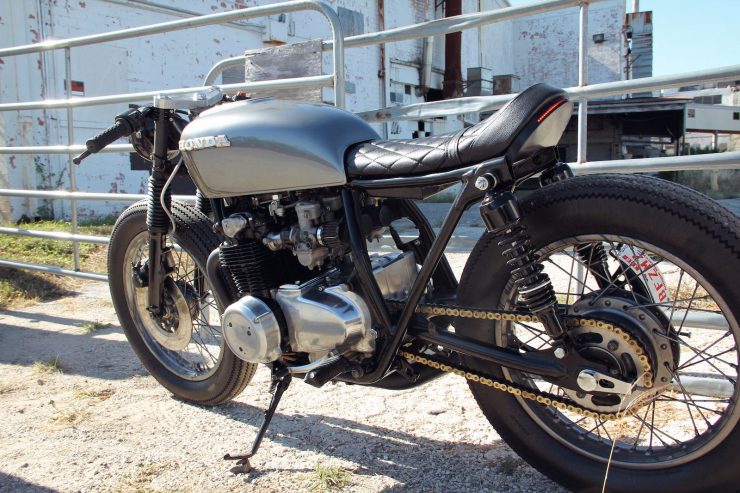 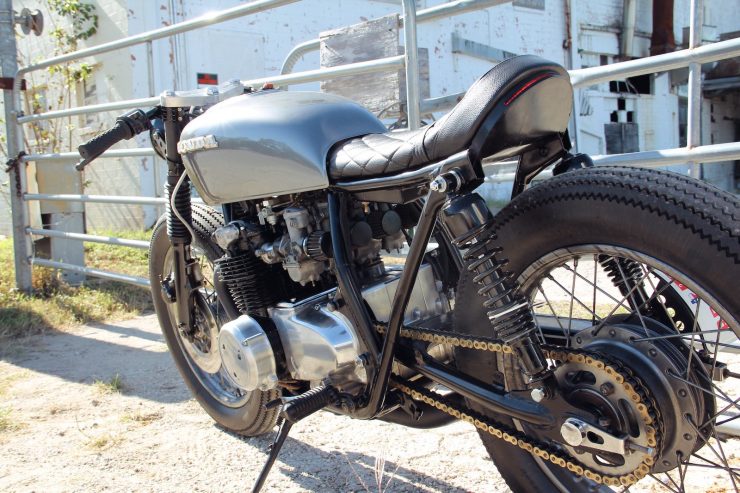 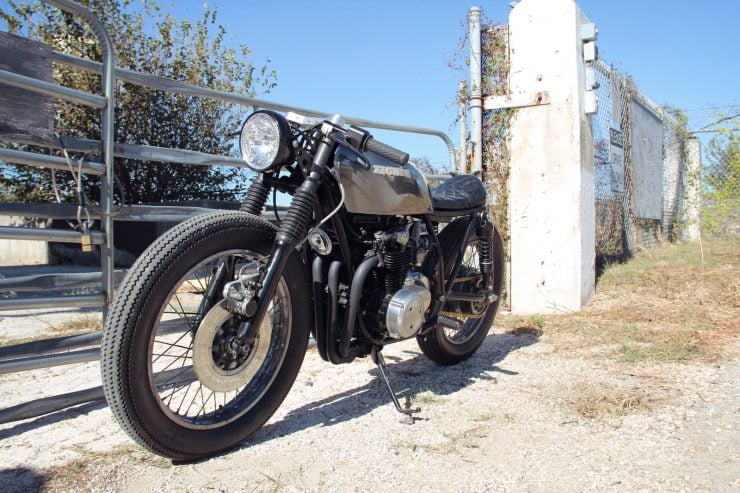 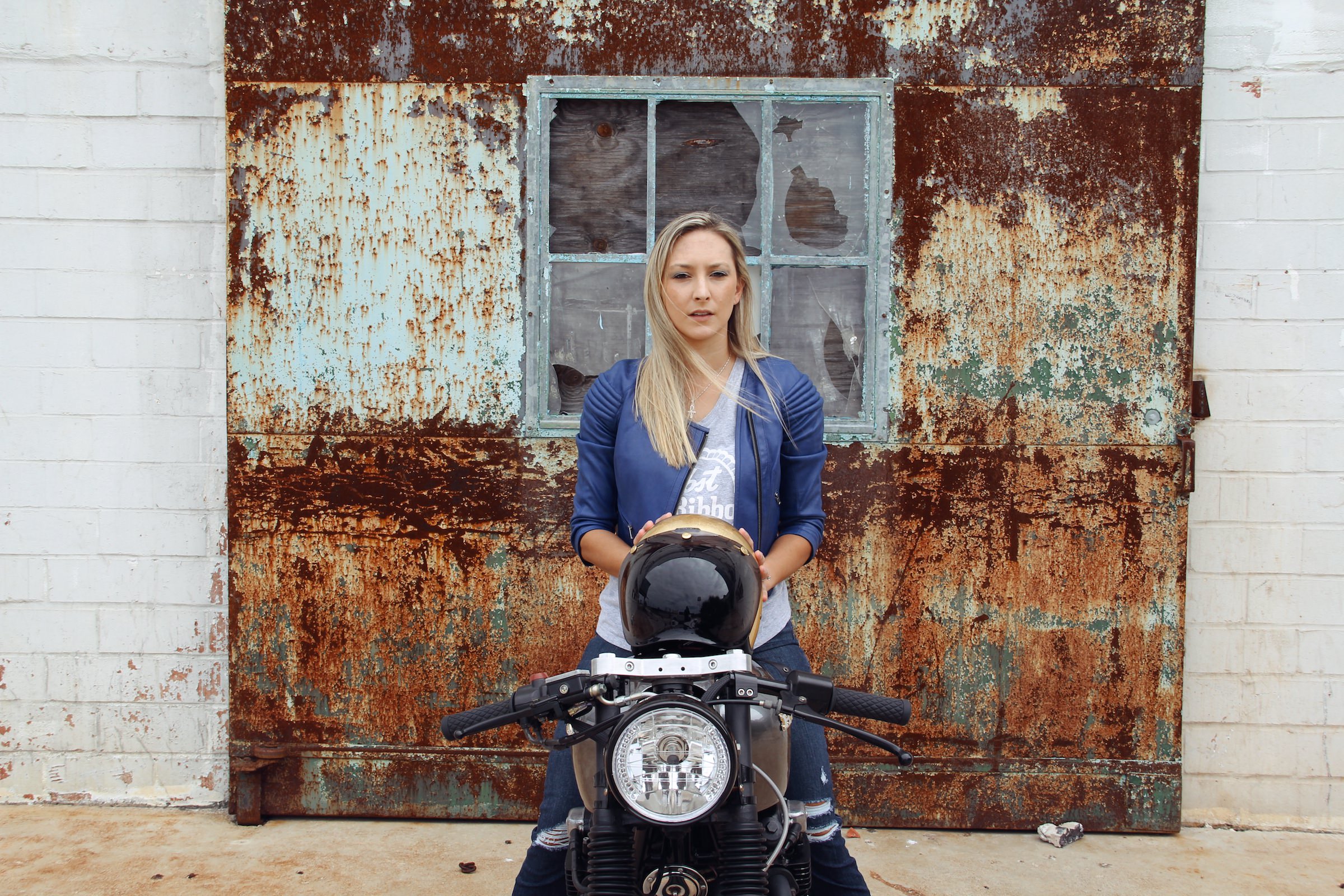