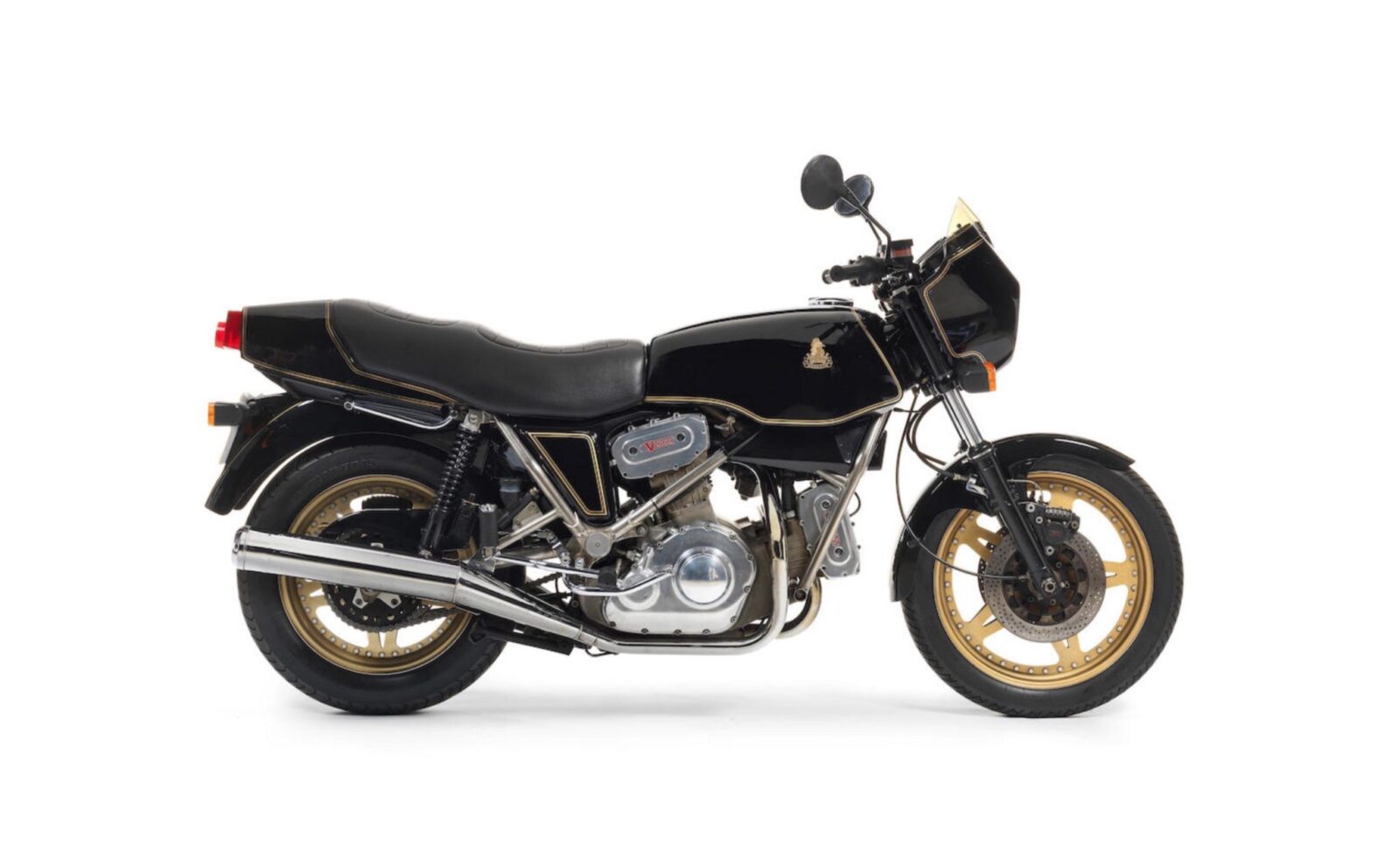 The name Hesketh will probably always be most closely associated with the flamboyant world of 1970s Formula One racing, and for giving James Hunt his Formula One debut in 1973. The team were notoriously fond of champagne and would drink cases of the stuff regardless of their actual finishing positions, typically in the nearest 5 star hotel to the finish line.

A Brief History of the Hesketh V1000

After leaving F1, Lord Hesketh turned his attention to resurrecting the British motorcycle industry. It had been devastated by poor management and a surge of cheap, reliable motorcycles out of Japan. From the outset, Lord Hesketh’s plan was ambitious. Probably far too ambitious. But that’s exactly what they’d said when he launched his own F1 team in 1973, later having his own car designed and built – the Hesketh 308 that would go on to become a race winner.

The plan for Hesketh Motorcycles was to incorporate the best of British design into a new, large capacity sports touring motorcycle that would draw favourable comparisons with the Vincent Black Shadow.

An all-new 992cc air-cooled 90° V-twin was developed by Weslake Research and Development, an engine production company run by Harry Weslake, who had worked on the Rolls-Royce Merlin engine, every Jaguar engine up until the V12 of the 1970s, and the V12 used by Dan Gurney to win the 1967 Belgian Grand Prix.

The frame was designed to use the engine as a stressed member, utilising nickel-plated Reynolds 531 steel tubing. Astralite alloy wheels were used front and back, Brembo brakes could be ordered, and the rear shock absorbers were twin Marzocchis, with custom yokes machined from solid alloy billets holding the forks up front.

The Weslake V-twin was capable of 86 bhp, and had a cast one piece crankshaft, alloy cylinder heads, aluminium barrels with iron liners, as well as four valves and an overhead camshaft per cylinder. 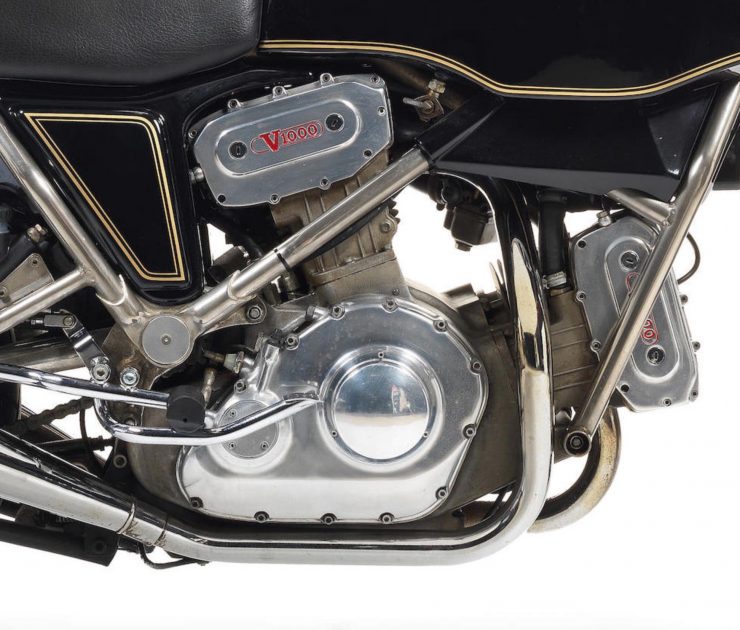 The core design rolled into the V1000 was promising, however the first bikes that were sold suffered from a lack of development, and were actually little more than prototypes that suffered woeful reliability – particularly with their gearboxes and overheating rear cylinders. This, combined with the hefty price tag meant that only very few were sold – less than 200 in total.

Hesketh Motorcycles spluttered along for a few short years, and were almost bought by Cagiva and then Triumph respectively. In 1984 the doors came down for the last time, however the development engineer and test rider Mick Broom wasn’t ready to say goodbye. He set up shop in the same buildings, working on a shoestring budget to work out the kinks in the original design and providing parts and maintenance to the V1000s that had been sold.

Mick would eventually set up Broom Development Engineering to sell a dozen or so brand new Hesketh V1000s each year, and he could rework V1000s from the first production run to solve the inherent issues with the transmission and the overheating cylinder.

In 2010 Mick Broom sold the rights to a new team of investors, and the all-new Hesketh 24 heads a model range that also includes the Hesketh Sonnet, the Valiant, the Valiant SC, and the final few V1000s.

The V1000 you see here was formally owned and displayed by the National Motorcycle Museum in Britain. It’s been with its current owner since 1992, and presents with engine and frame numbers that match factory records.

It’s estimated to be worth between £8,000 and £12,000, which seems reasonable for an interesting little piece of British motorcycling history. Particularly when you consider the bragging rights of owning a motorcycle with an engine that had a direct link to the V12 Merlin. If you’d like to read more about the bike or register to bid you can click here to visit Bonhams. 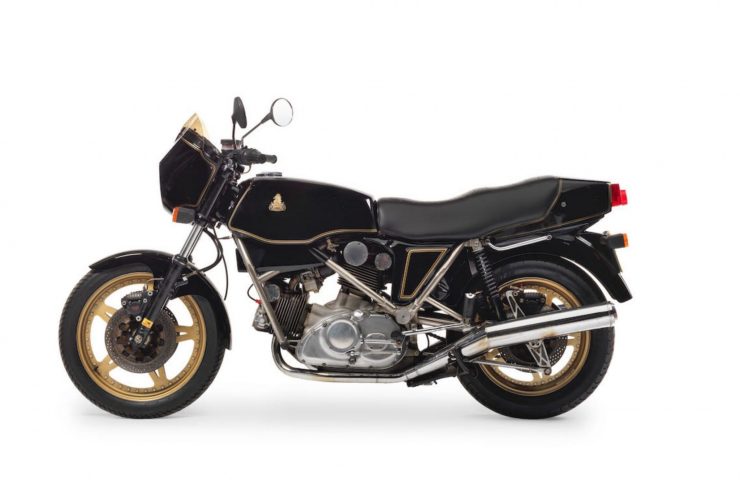 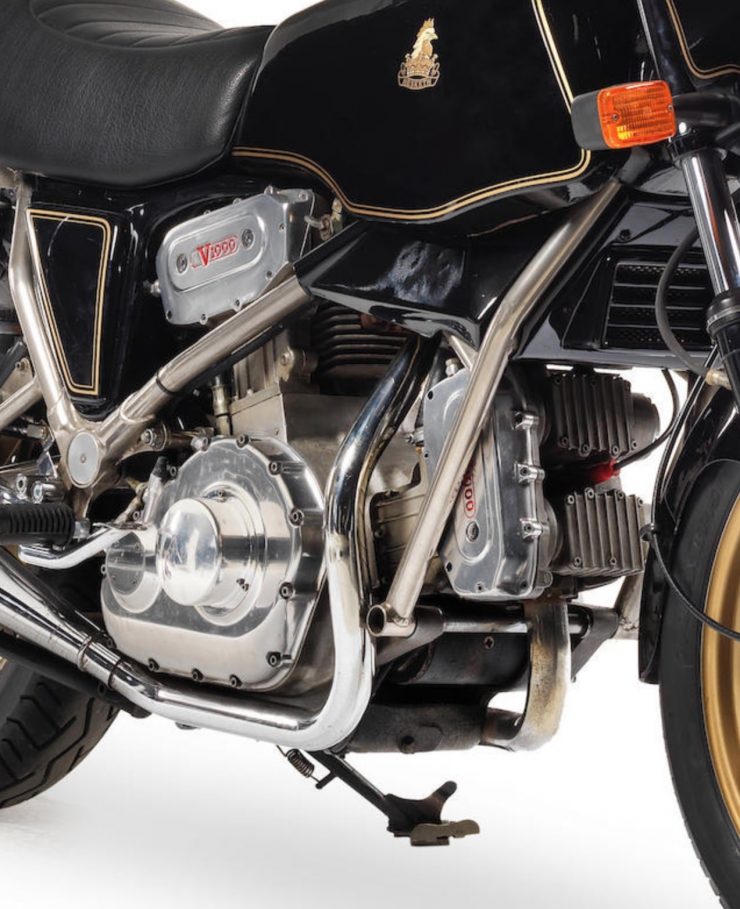 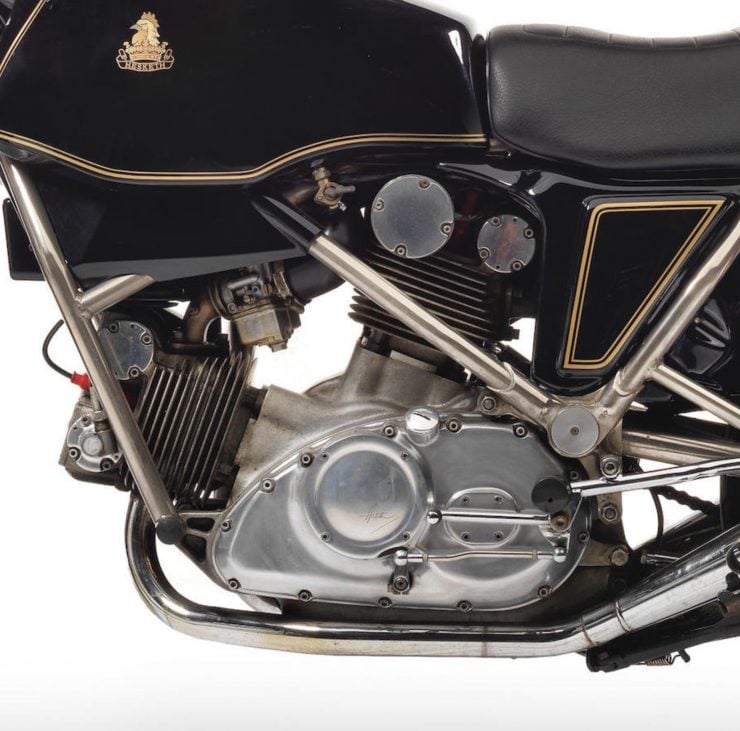 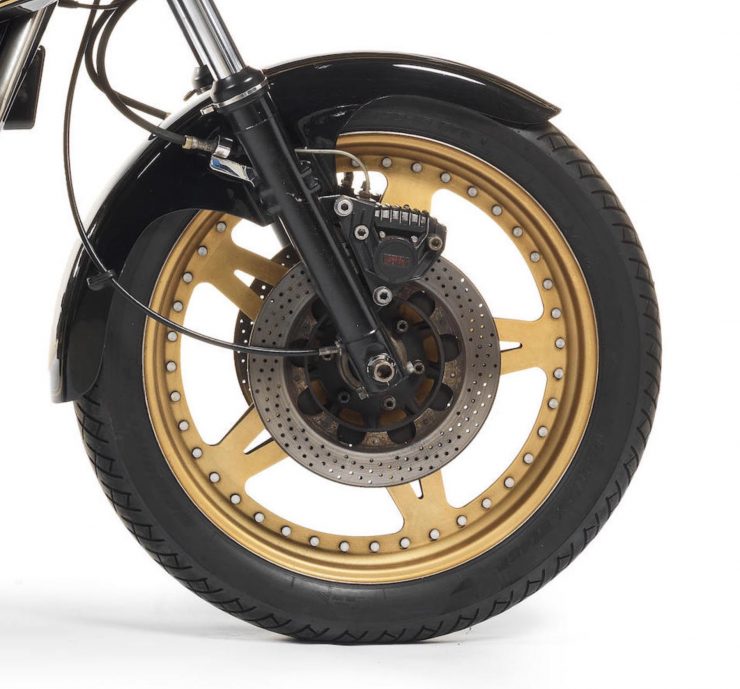 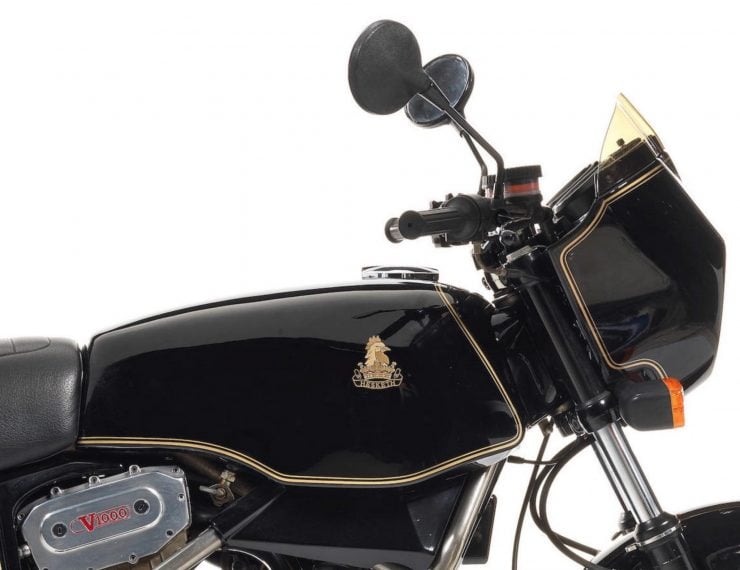 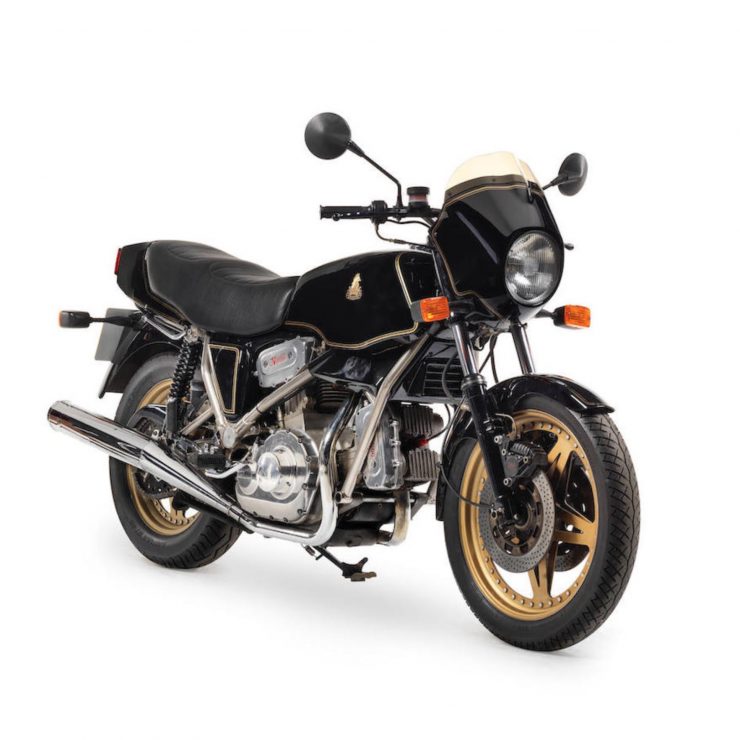 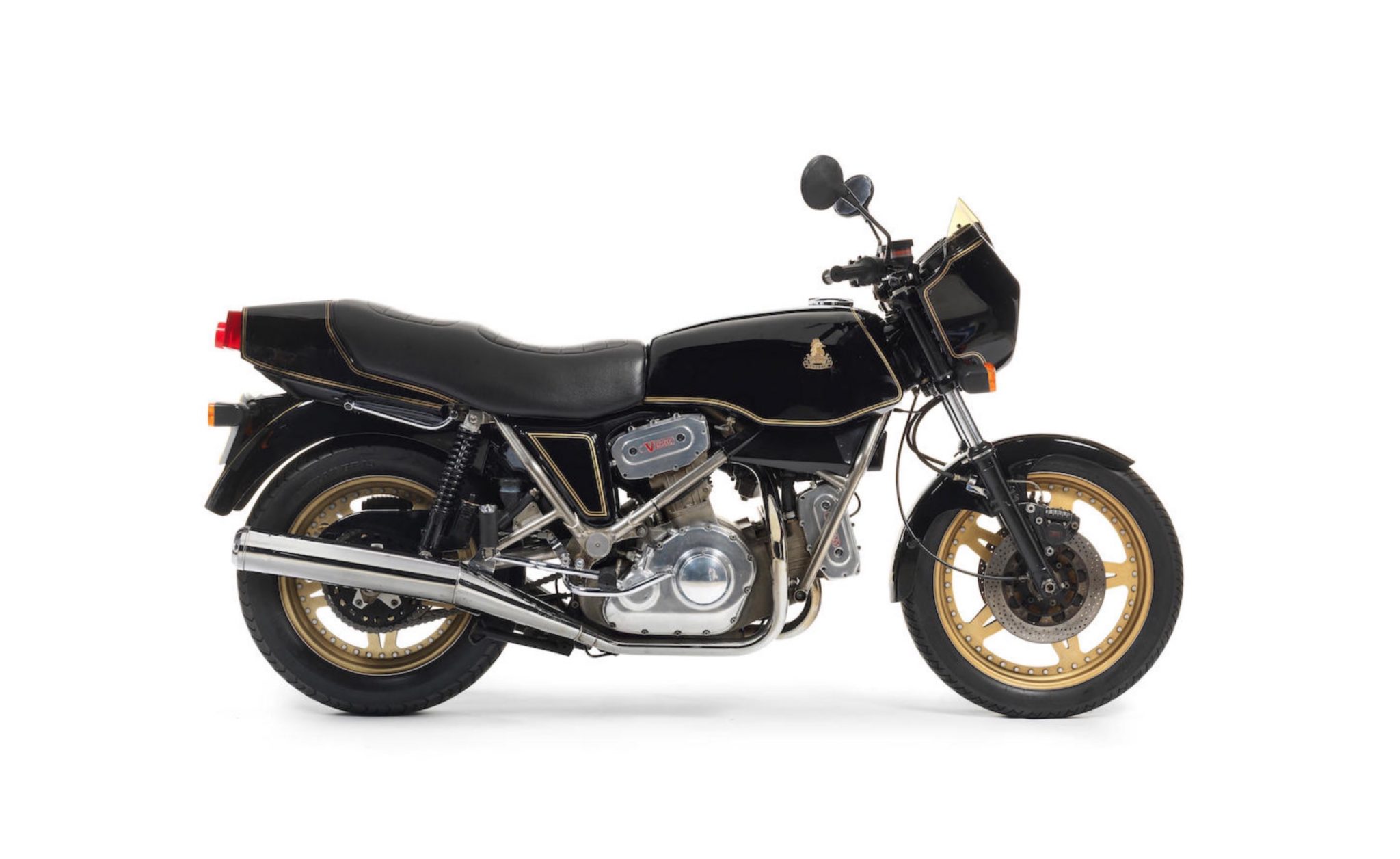