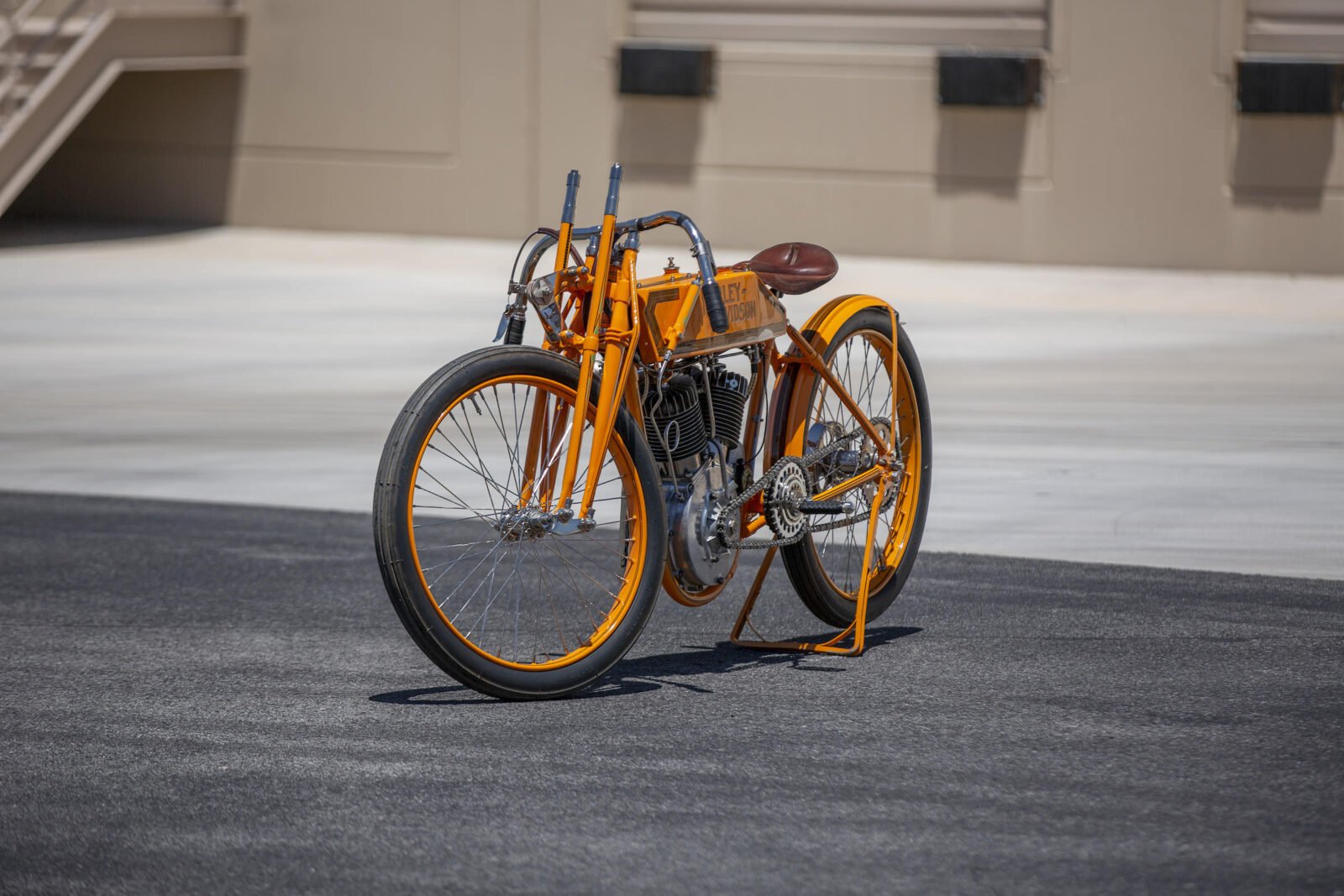 The Harley-Davidson 11K was the American company’s first purpose-built V-twin racer – it was developed by Bill Ottoway, an early engineering genius who had been poached from Harley-Davidson’s rivals over at Thor.

Although Harley-Davidson motorcycles had been used in competition previously, including a first race win in 1904 at The Milwaukee Mile with the single-cylinder Model 6E, they hadn’t tried their hand at large-capacity factory-built racing machines. In 1915 that all changed.

William “Bill” Ottaway was cunningly hired away from the highly-successful racing department at Thor by William Harley in 1913. Bill had been the brains behind Thor’s racing efforts, and he was made chief engineer at the new Harley-Davidson Racing Department – working directly alongside company co-founder William Harley. 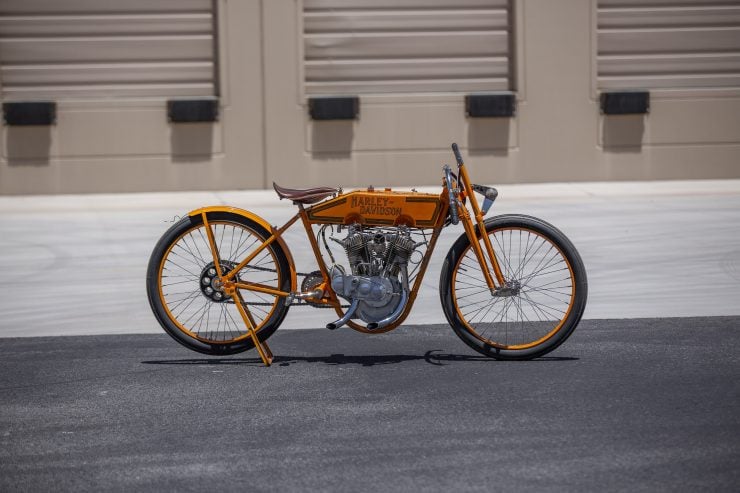 Rather than starting from scratch with an all-new engine, Ottaway used the pre-existing Model 10 production bike as his starting point with its intake-over-exhaust 61 cubic inch V-twin, Bill experimented by increasing the size of the intake ports and the intake manifold, a larger carburetor was fitted, along with stiffer valve springs, a special racing cam, a steel flywheel, and the oil pump was cast into the gear case cover.

The first competitive season for the new Harley-Davidson 11K “Stripped Stock Racer” was 1914, and it showed immediate promise by winning major races in Minnesota, Alabama, Mississippi, Pennsylvania, Tennessee, South Carolina, Massachusetts, Ohio, Nebraska, Oregon, Texas, and across the borders in both Canada and Mexico.

In 1915 the 11K would be offered to privateer racers for the first time through dealerships across the country. Later in the 1915 season the now legendary Harley-Davidson “Eight Valve” racing engine would reach maturity and begin being used in competition. While faster than the simpler engine it replaced it was also less reliable, so Harley often ran entrants on both motorcycle types to help ensure a win. 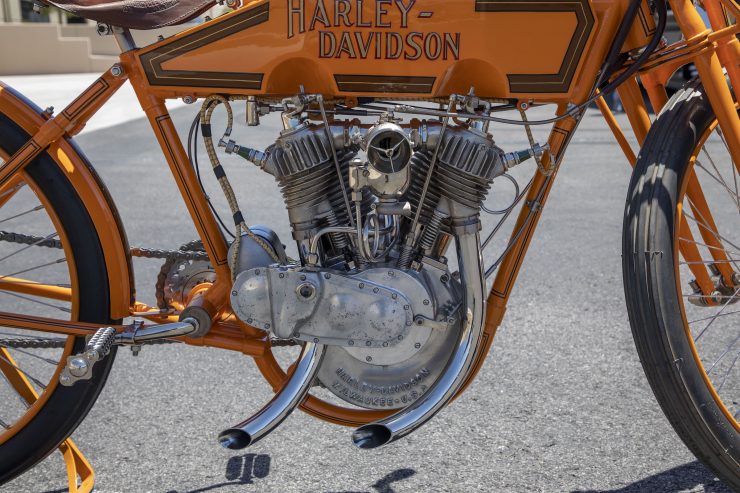 The motorcycle you see here is one of the exceedingly rare 79 original racers, and it was almost lost forever – abandoned in a pile of engine scraps in Argentina.

It had been abandoned as a result of a dropped valve, which had punched a hole in a piston and bent the connecting rod. Spare parts for these are almost impossible to come by, and at the time its value was multiple orders of magnitude less than it is today, so it was left with a pile of other motorcycle parts.

Fortunately it was noticed by someone with an eye for these things and painstakingly restored back to such accurate original condition that it won the Greenwich Concours d’Elegance Most Outstanding Motorcycle award in June 2017.

The remaining parts of the original frame were integrated into a new, period-correct frame. The original engine was carefully restored, new wheels were laced to the surviving hubs, and the braced racing forks with rare André dampers were rebuilt.

The bike is presented as it was when it won at the Greenwich Concours d’Elegance, it’ll be rolling across the auction block with Mecum Auctions in late August in Monterey. If you’d like to read more about it or register to bid you can click here to visit the listing. 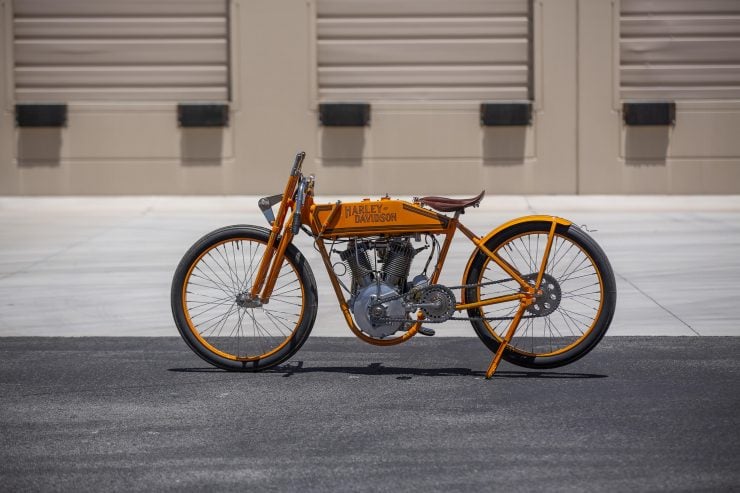 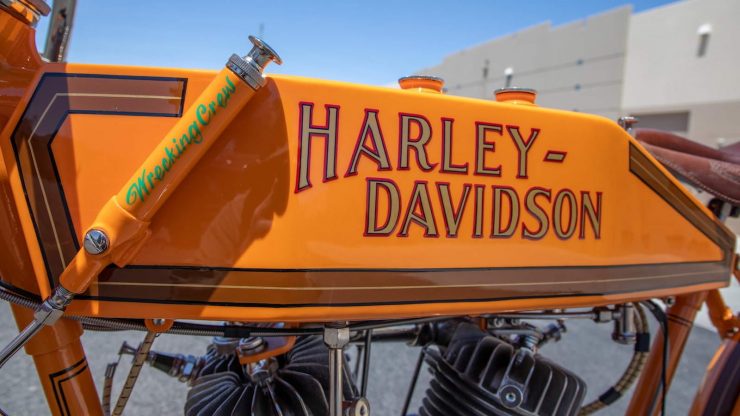 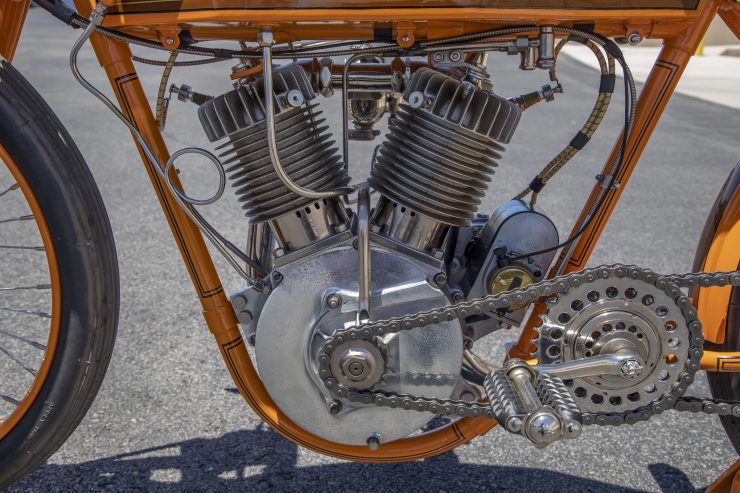 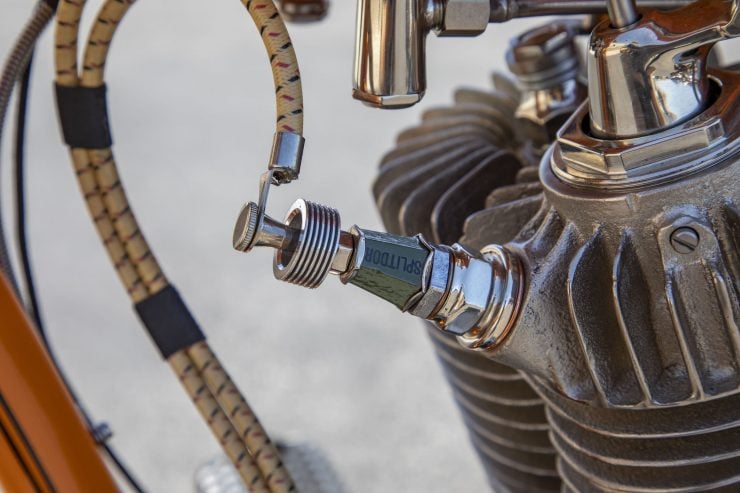 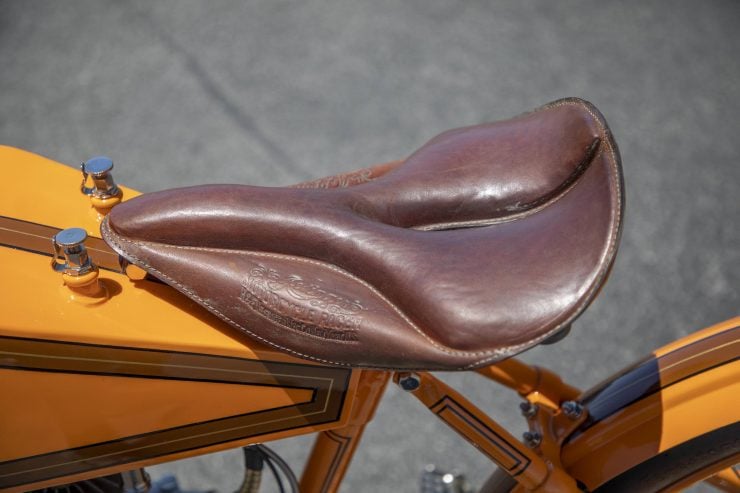 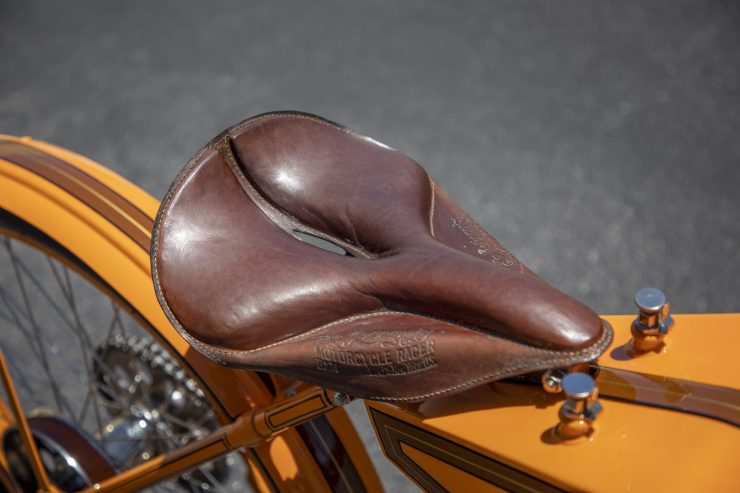 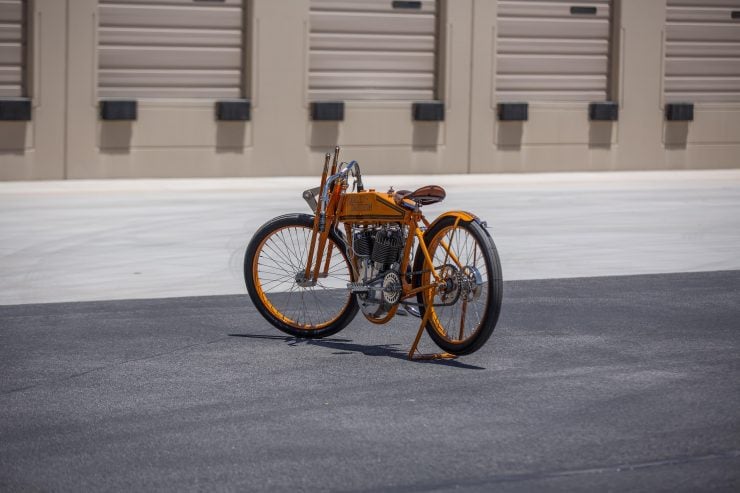 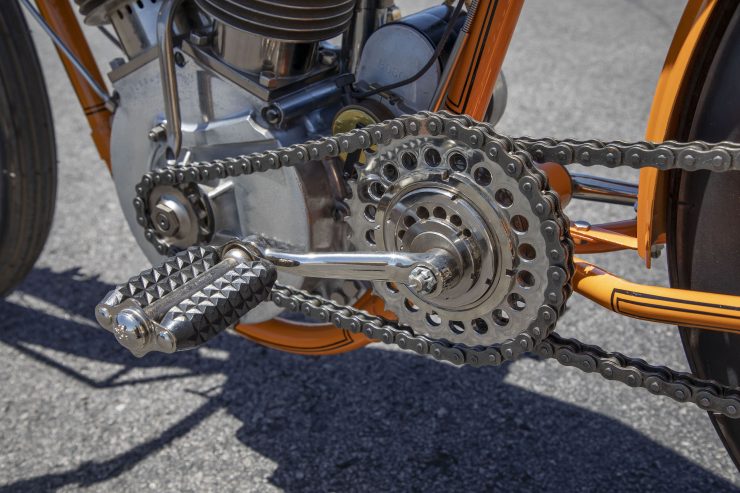 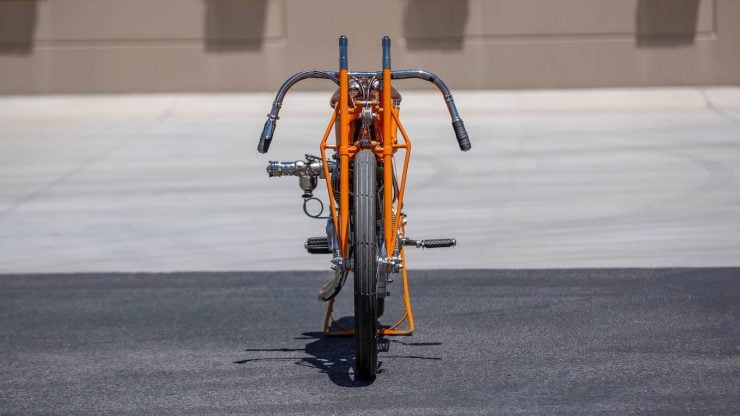 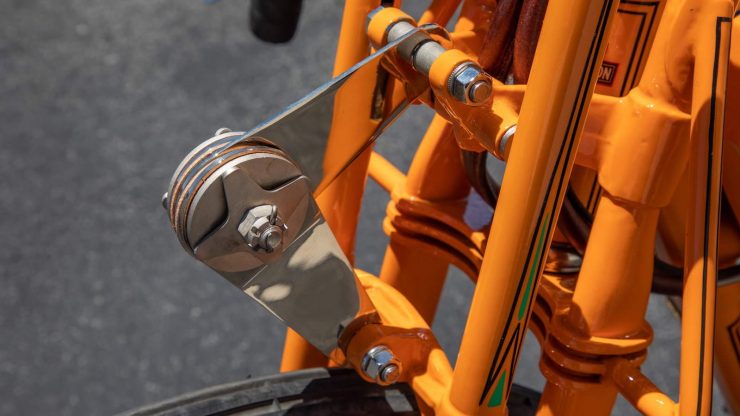 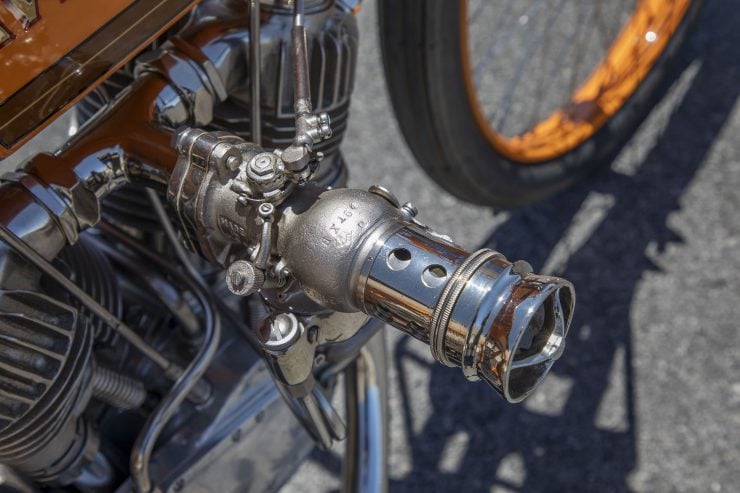 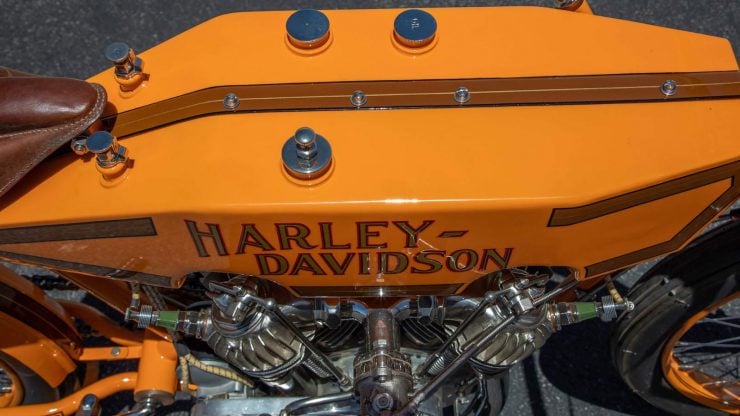 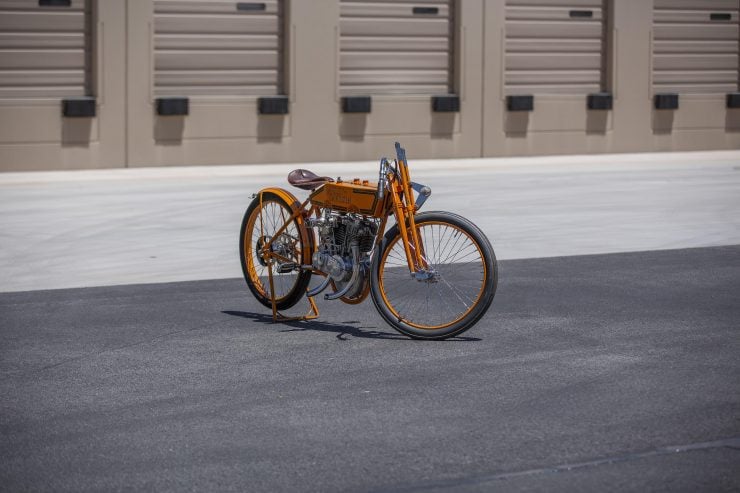 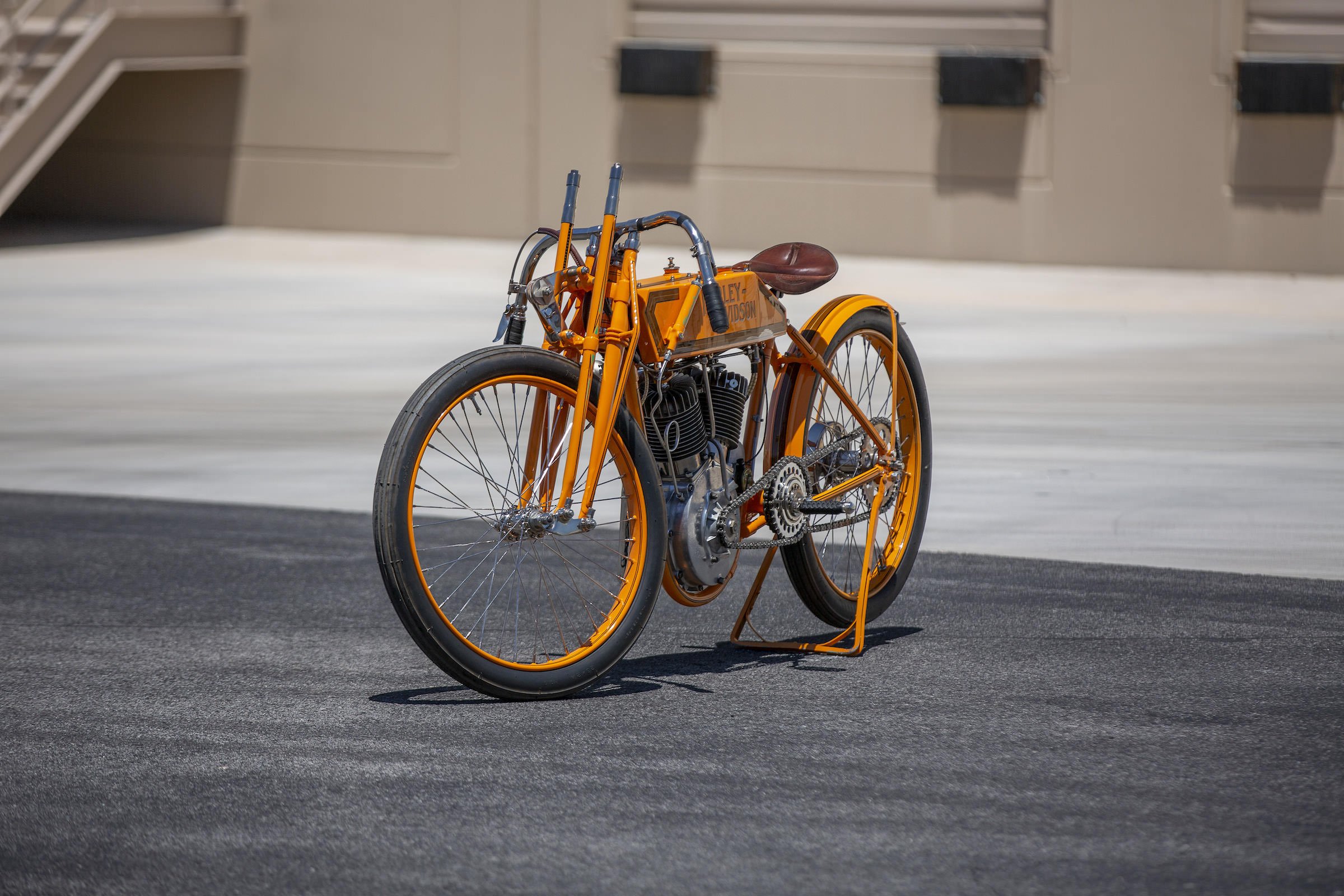