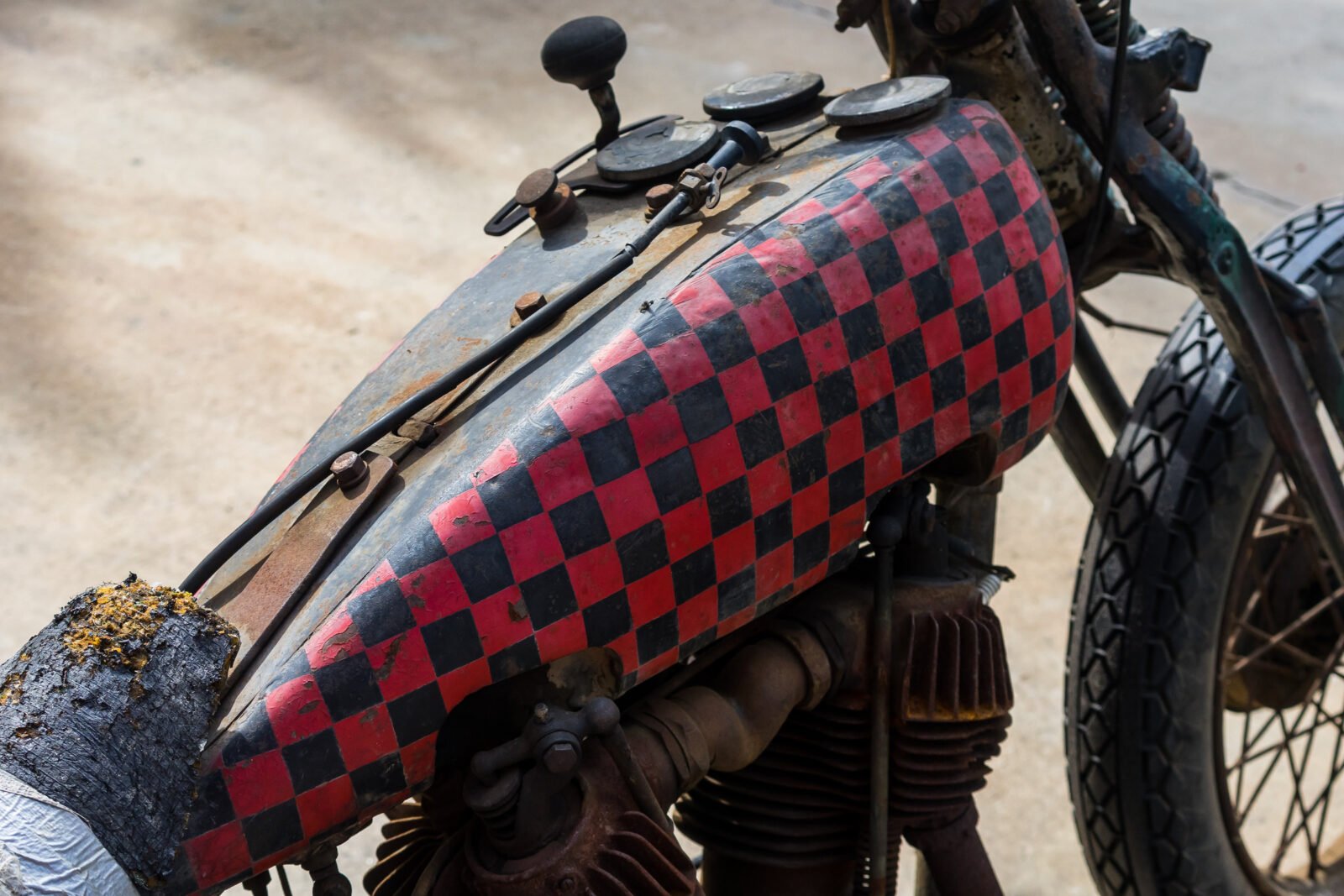 The Harley-Davidson JDH Twin-Cam is one of the most celebrated motorcycles ever built by the Milwaukee-based manufacturer. The 74 cubic inch V-twin featured twin cams with two lobes on each, rather than the older set-up that used a single cam with 4 lobes. This reduced the reciprocating weight and reduced the length of the cam followers – allowing higher-RPM operation.

This made the Twin-Cam ideal for racing applications, and it was put to work almost immediately on the race tracks of the USA in 1919. Initially the engines were only available to factory racers, it wasn’t until 1928 that Harley began offering their Twin-Cam engine in road bikes available to anyone would could afford the MSRP of $335 – a not insignificant sum of money at a time when $385 would buy you an entry-level Model A Ford.

Offering 29 hp at 4,000 rpm, and a top speed of up to 100 mph (if you knew how to modify the engine to factory racer specification), the 1207cc Harley-Davidson JDH Twin-Cam became one of the most desirable models ever made by the company.

Privateer racers would often buy road-going JDH Twin-Cams and strip them back to reduce weight, rework the engine, and use them in competition – oftentimes with significant success. 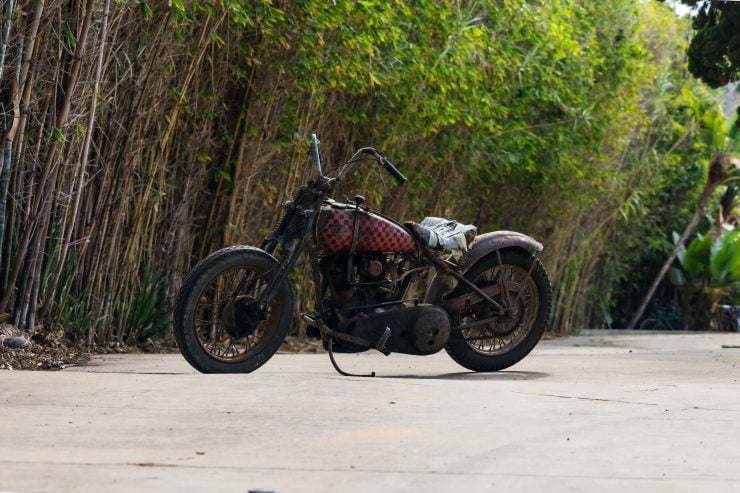 The Big Bear Run was rumored to have started in 1920 or 1921 depending on who you ask, when two friends in a bar in LA on New Year’s Eve made a bet to see who could make the 100 mile ride to Big Bear Lake first.

One of the men took the back route through the countryside, and the other took the road route. Due to the time of year the road was blocked due to snowfall, and the man who set out across the wilderness won the race handily.

Each year thereafter the Big Bear Run grew more and more popular, in the 1950s it was one of the biggest races of the year, attracting some of the top riders in the world including Bud Ekins. Almost 1,000 riders turned up for it in 1960, and as a result the California Highway Patrol shut the event down from 1961 onwards. 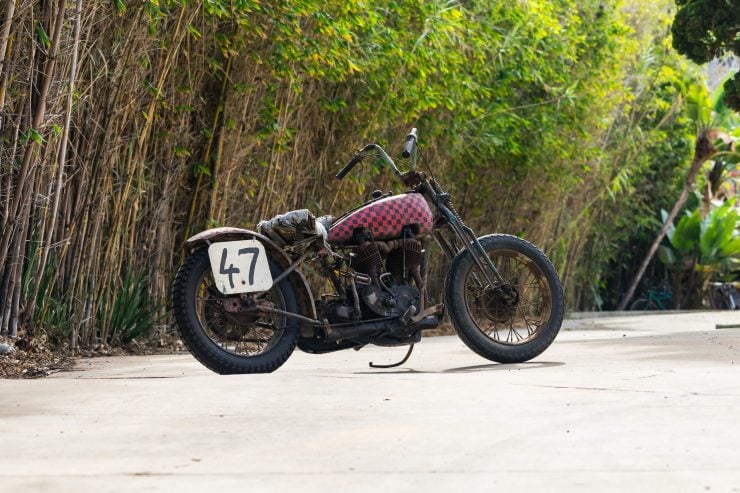 The motorcycle you see here is from the first year of “public consumption” Harley-Davidson JDH Twin-Cams – 1928.

The bike was modified sometime after it was bought (the year is unknown) into a California desert racer to take part in period events like the Big Bear Run. It was nicknamed “Old Coot” and ridden by Bob Ross (the motorcycle racer not the television artist).

Remarkably, the bike has been preserved in exact period condition as a part of the Jim Lattin Collection, it still features its racing number “47”, its unusual red-and-black checker painted fuel tank, and its high handlebars.

If you’d like to buy the Old Coot you can click here to visit the listing on Mecum, it’s due to be auctioned in Las Vegas at the beginning of June, and it’s listed as being a very strong runner. 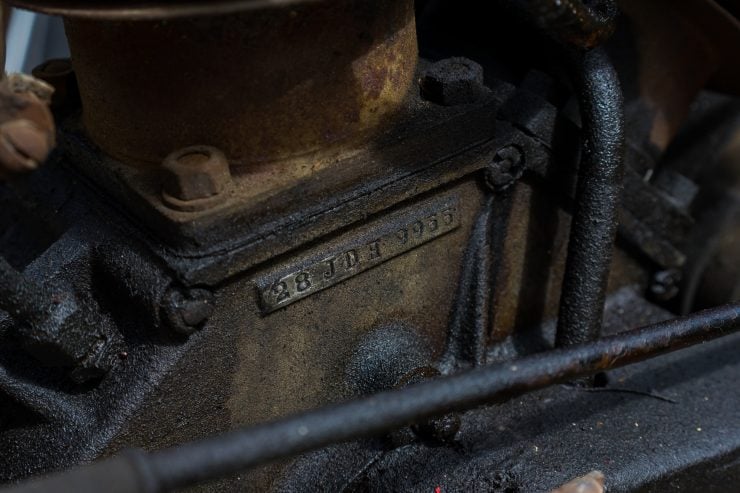 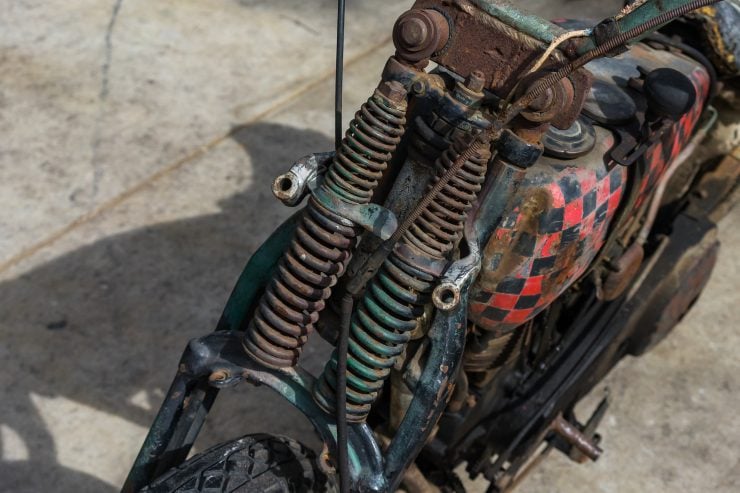 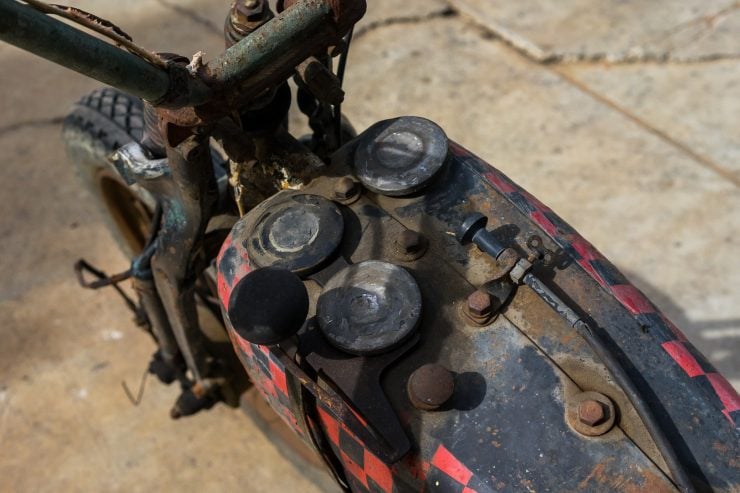 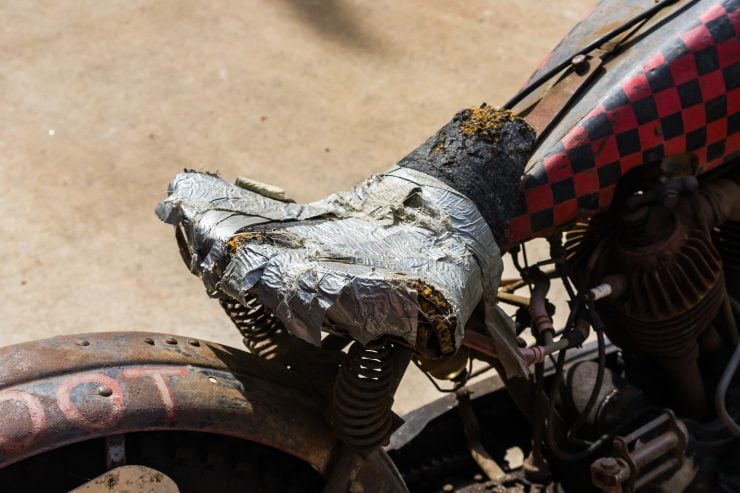 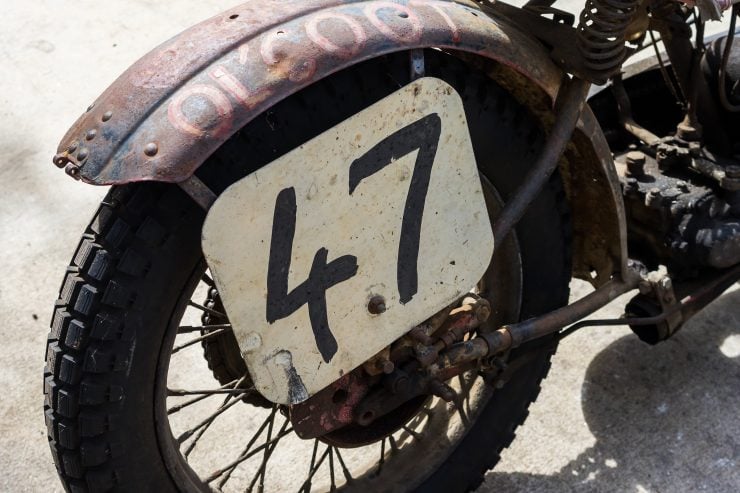 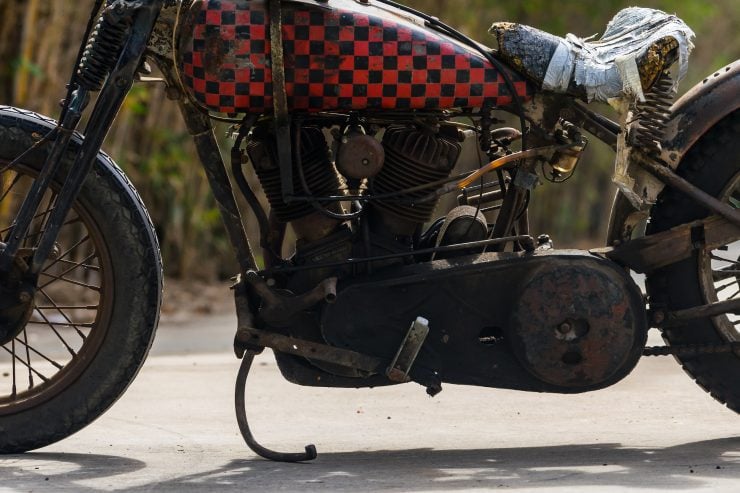 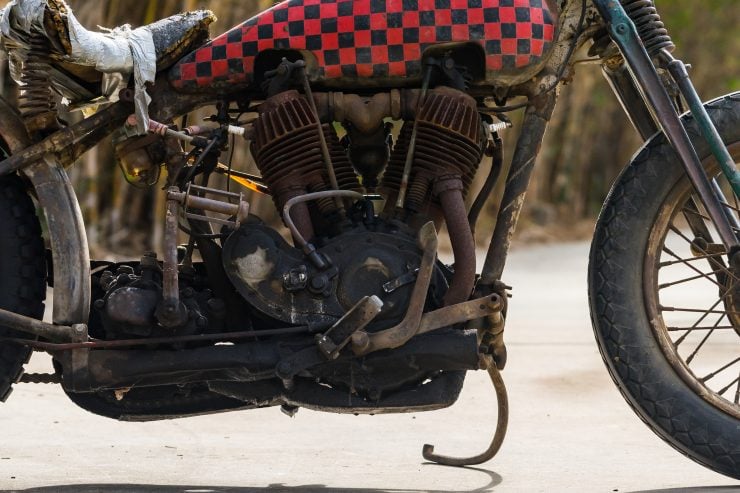 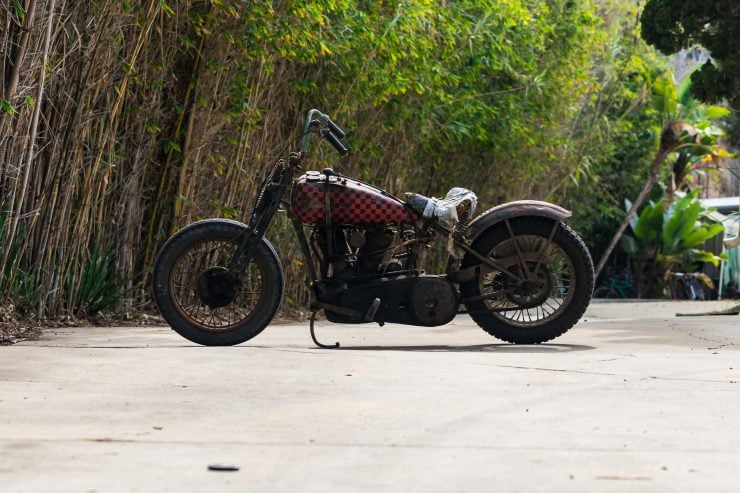 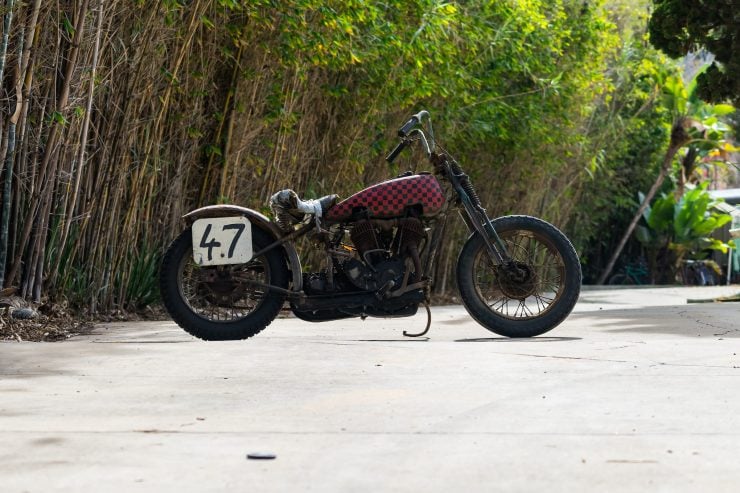 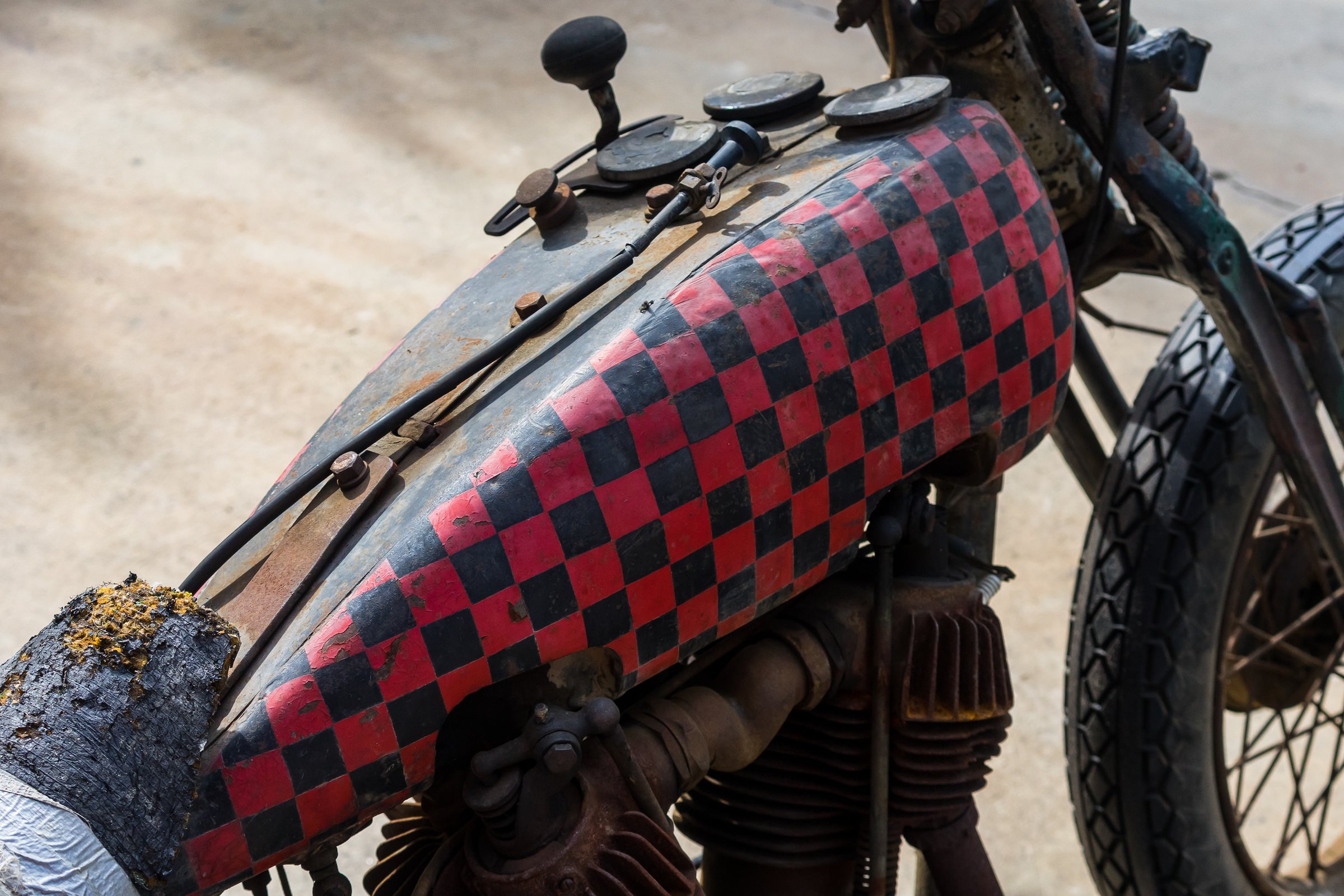