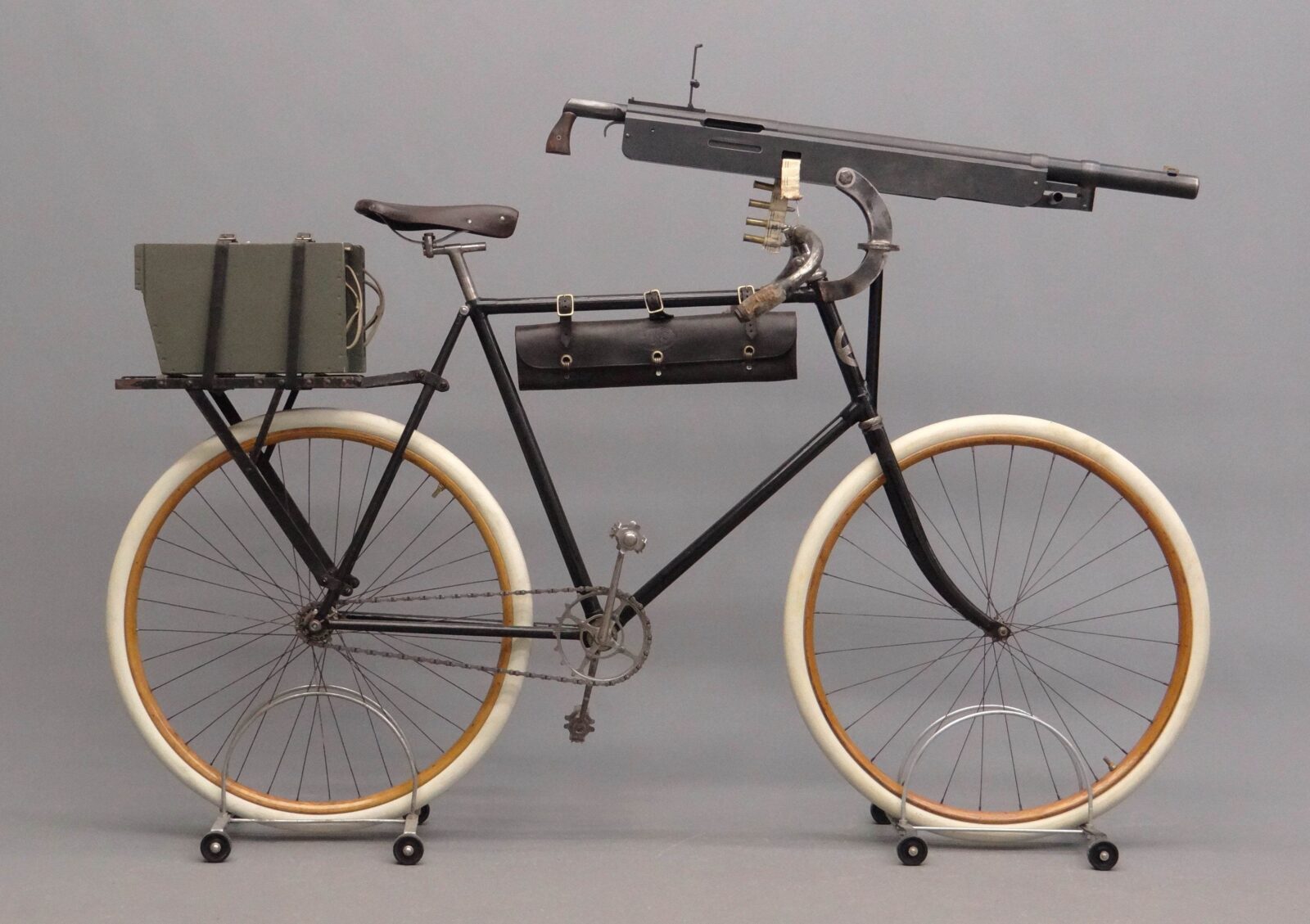 This is an 1897 Columbia Military Pneumatic Safety Bicycle, it’s been modified for military use with a belt-fed machine gun mounted to the front, and there are a pair of ammunition boxes on the rear cargo tray.

Having the word “safety” in the name of a pedal-powered vehicle with this much firepower may seem like a curious misnomer, however the term “safety bicycle” was originally used to describe all chain-driven bicycles with equal-sized front and rear wheels.

These bikes were deemed far safer than the earlier penny farthing bicycle designs that had a huge front wheel which positioned the rider exceedingly close to the front tipping point. Accidents were common, typically with riders going head first into the ground in front of them from a considerable height.

The development of the safety bicycle was almost certainly the most important single innovation in this history of the bicycle, with the exception of the initial invention of the original two-wheeled Laufmaschine in 1817 by Baron Karl von Drais in Germany.

The reason the safety bicycle was such a breakthrough was the use of sprockets and a chain drive, this allowed gearing to be used which meant the huge front wheel of the penny farthing with its pedal crank attached directly to the axle was no longer required.

Above Video: A documentary giving a detailed history of the bicycle.

The safety bicycle was invented by Englishman John Kemp Starley in 1885, though tragically he never patented the design and therefore missed out profiting on the skyrocketing popularity of the first modern bicycle.

In the years since, billions of bicycles that use Starley’s same basic idea have been made, they are a critical mode of transport for people in many developing countries, and many developed countries are slowly reverting back to bicycle use for the reasons of cost, convenience, and concerns for the environment.

Military use of the bicycle happened very early in the development of the first safety bicycles. The model you see here is a Columbia Military Pneumatic Safety Bicycle from 1897, just 12 years after the safety bicycle had first been conceived.

Although bicycles may seem like a strange thing for a military to use it begins to make more sense when you consider that it allows the almost silent movement of soldiers over relatively long distances using inexpensive machines that require no fuel and little maintenance.

Perhaps the biggest caveat is that bicycles offer very little in the way of protection, be it armor or firepower, from enemy soldiers – the best defense typically being to just pedal faster.

Over the years some have worked to solve this issue, most commonly faced by despatch/messenger riders, and the bicycle you see has by far the most amount of firepower I’ve ever seen attached to a velocipede.

It has to be said that the bike does look a little uncomfortable to ride, the handlebars and steering work normally with the gun itself mounted to the steering head using a simple swivel. When a military cyclist encountered an enemy he would need to stop, take aim, then start sending lead downrange.

The ammunition box on the back of the bike indicates that there would be no shortage of cartridges, and you have to think that this set up must have offered quite a deterrent to enemy soldiers, who themselves would typically be armed with simple bolt action rifles.

If you’d like to see the listing for this unusual bicycle you can click here to visit Live Auctioneers, sadly the listing ended sometime ago and so bidding isn’t available.

The original price guide had been set at $4,000 to $5,000 USD but eventually sold for a remarkable $13,500 USD. Oh and it should be noted that the machine gun has been internally disabled so it can no longer be used. 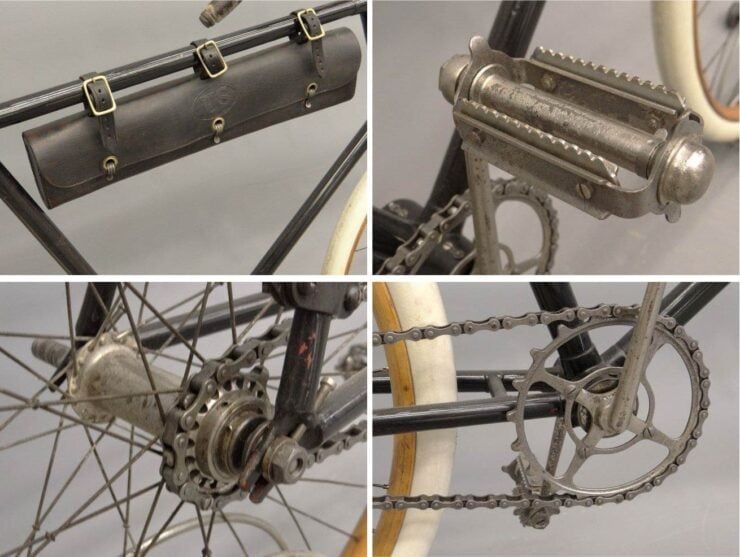