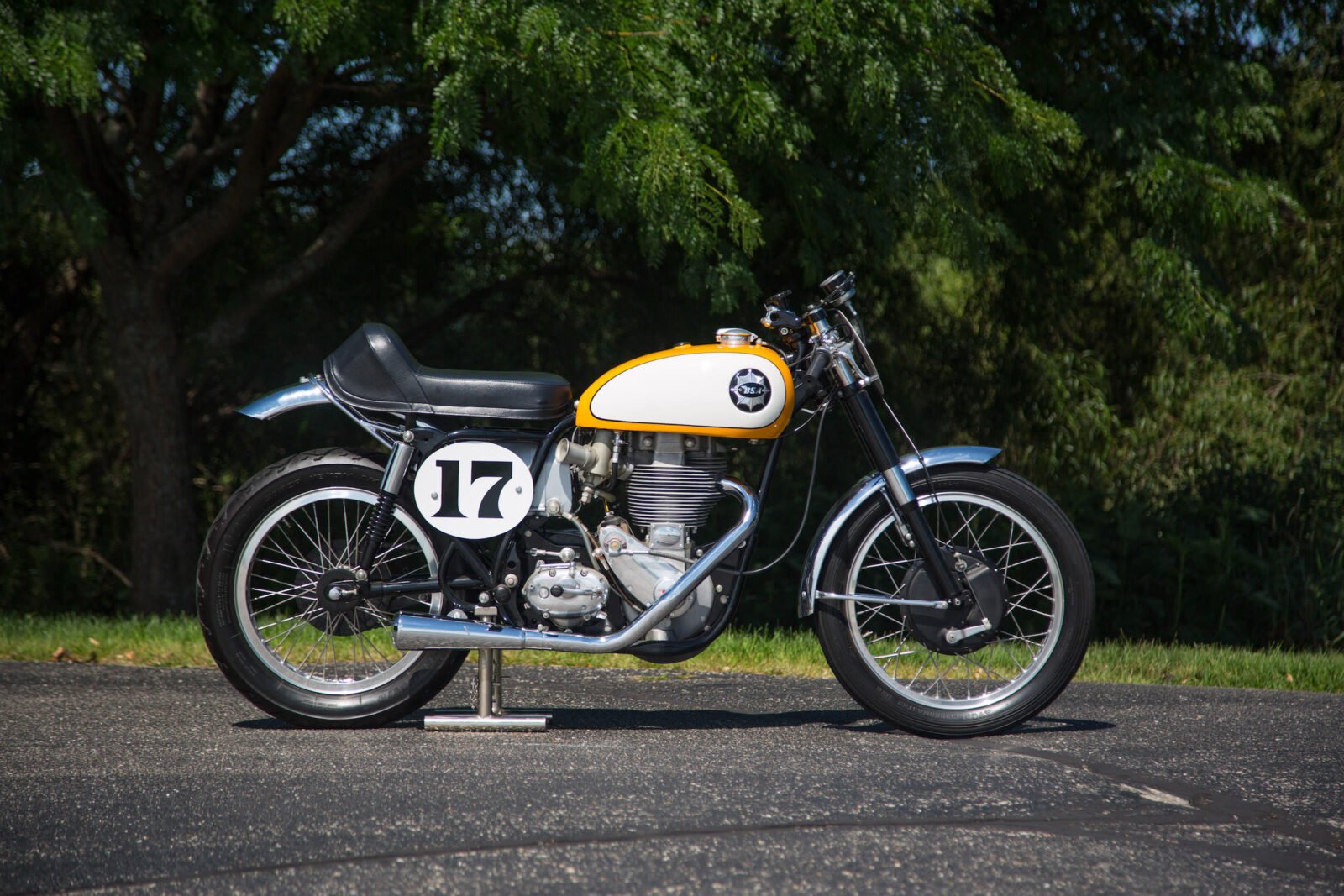 The BSA Gold Star was one of the most dominant motorcycles of its time, it raced not only on the asphalt, but on hillsides, flat tracks, beaches, California deserts, and even on small Pacific islands.

At its core the Gold Star was a simple machine, but this is likely what gave it the reliability it would become famous for. BSA offered the model with either 350cc or 500cc single-cylinder engine, with air-cooled, overheads valves, and single Amal carburetor, an aluminum alloy barrel and head, an Elektron alloy gearbox (a magnesium alloy), and a lightweight racing frame.

The recipe for the Gold Star was simple enough, and riders of all stripes found a way of modifying them to suit their own particular competitions.

BSA first introduced the Gold Star just before WWII, it was named after the famous Gold Star pin that was awarded to motorcycle racers who lapped the Brooklands circuit at over 100 mph. 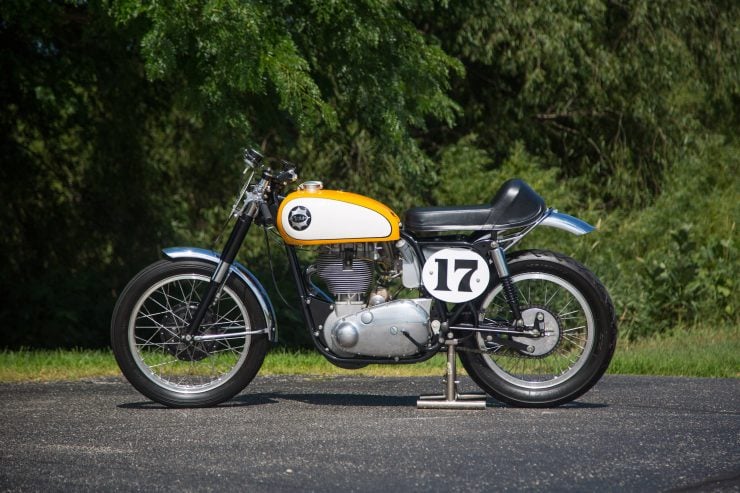 Racing legend Wal Handley did this for BSA in 1937, returning from retirement to ride a BSA Empire Star that had been heavily modified with an alcohol-fueled 13:1 compression ratio engine. He topped 106 mph on his lap around the banked historic circuit, BSA recognized the significance of this from a marketing perspective, and released a new sporting motorcycle bearing its name.

Production of the new Gold Stars was rudely interrupted by Hitler, as production had to be shifted to beating him, but a new Gold Star was developed after the war and released in 1948.

I don’t know if anyone has successfully compiled a complete list of race wins enjoyed by the 350cc and 500cc versions of the Gold Star, but I haven’t been able to find it. Suffice to say the model took a long list of victories both on road and off, and it didn’t leave production until 1963.

Today the surviving examples of the model are rapidly appreciating in value, and you’ll invariably see them in vintage motorcycle races in either scrambles or clubman trim. Typically at the front of the grid next to the Nortons. 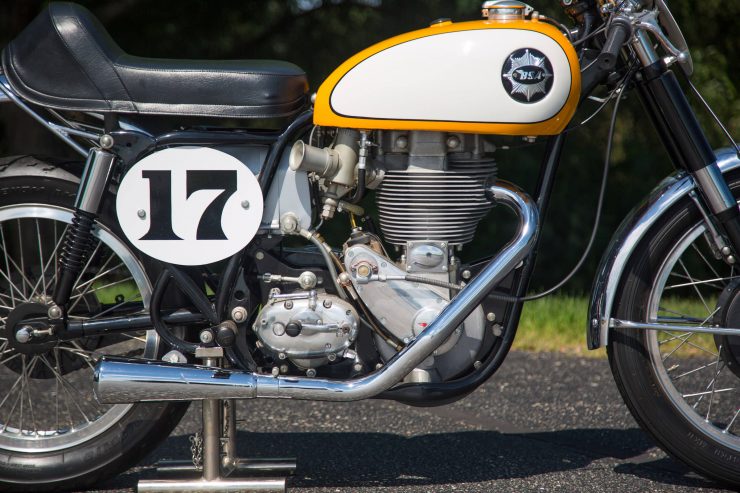 The BSA Gold Star you see here is likely to be of significant interested to both collectors and vintage racers as it’s a 1956 model. This was arguably the most important year for the Gold Star as it was fitted with a newly designed head, a larger 1.5 inch Amal GP carburetor, a larger intake valve, an uprated flywheel, and an optional close-ratio gearbox.

This particular Gold Star is in beautifully restored condition, it features many of the signature racing components of the era, including lightweight flanged alloy rims, a sweptback exhaust with a short megaphone muffler, and it’s fitted with the correct 1.5 Amal GP racing carburetor.

It’s currently set up for vintage racing, with clip-on handlebars, rear-sets, and a single seat with a bump-stop rear. There are racing numbers attached up front and on each side, with a large tachometer mounted front and center.

Period correct drum brakes are fitted front and back, likely the originals though there’s no way to be certain, and it’s capped off with a beautiful white-over-yellow fuel tank with the classic BSA badge on either side.

If you’d like to read more about this bike or register to bid you can click here to visit the listing on Mecum Auctions. 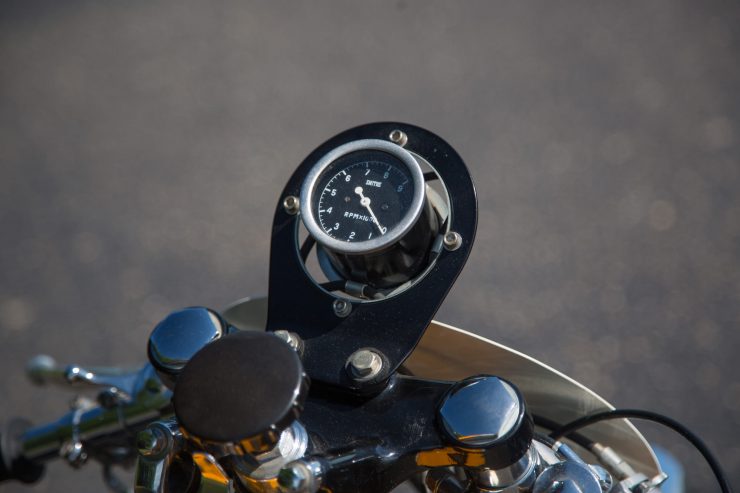 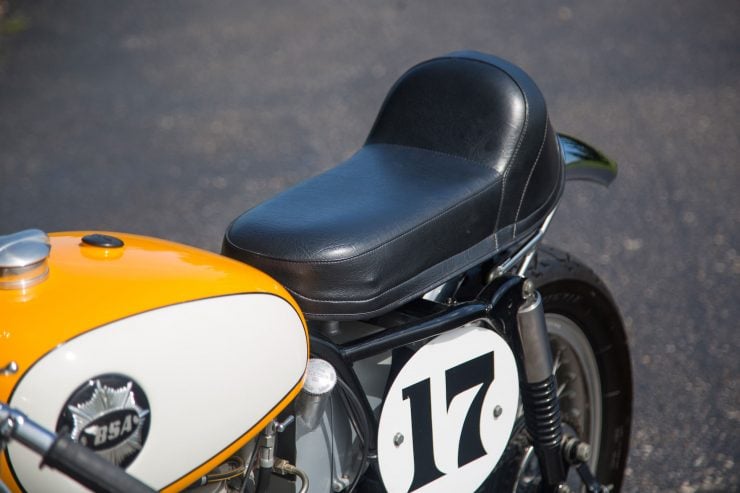 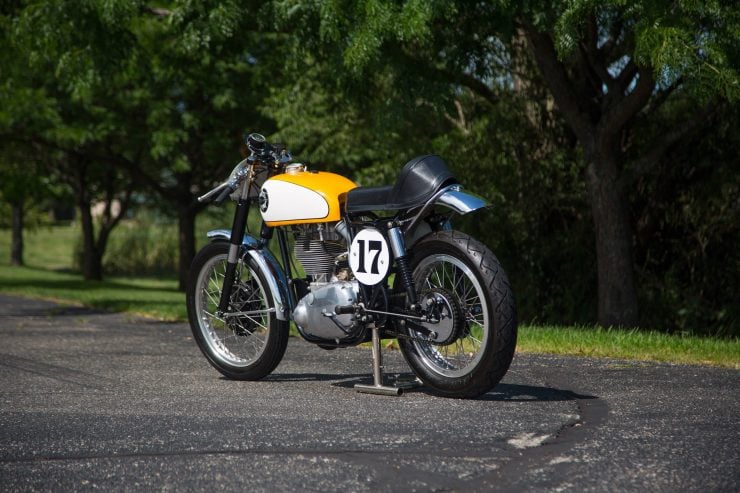 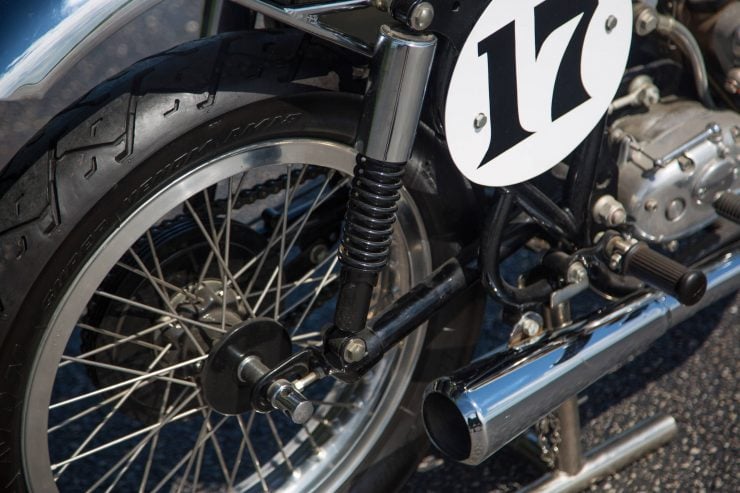 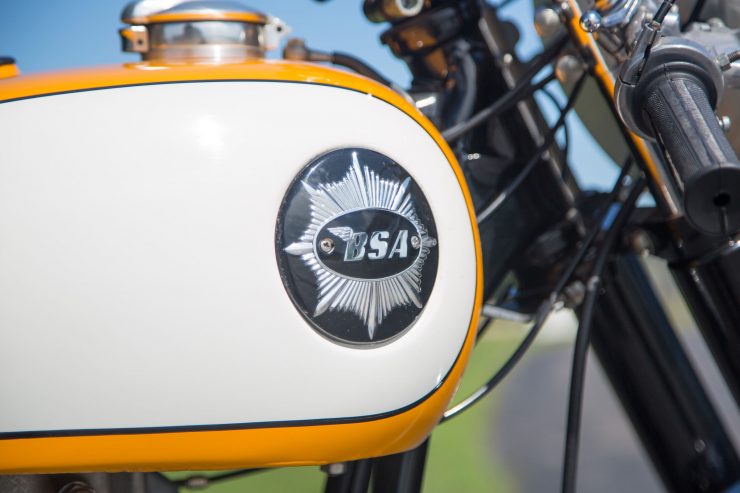 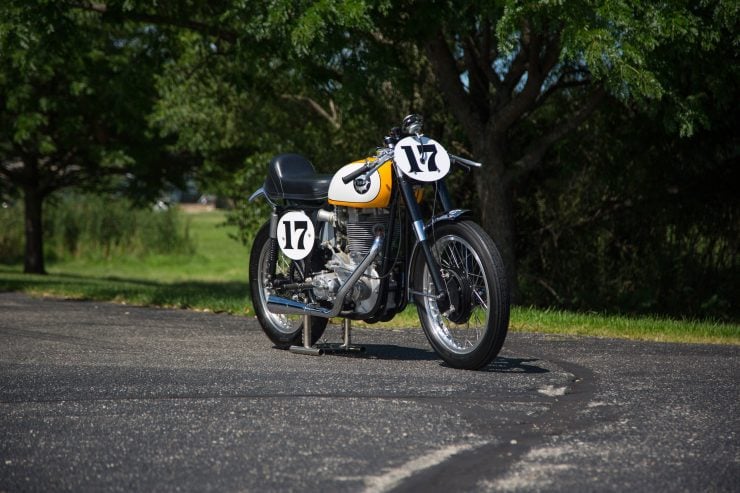 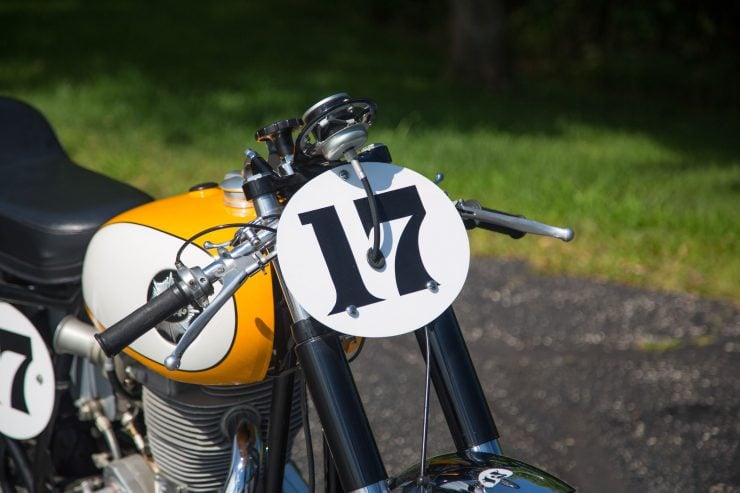 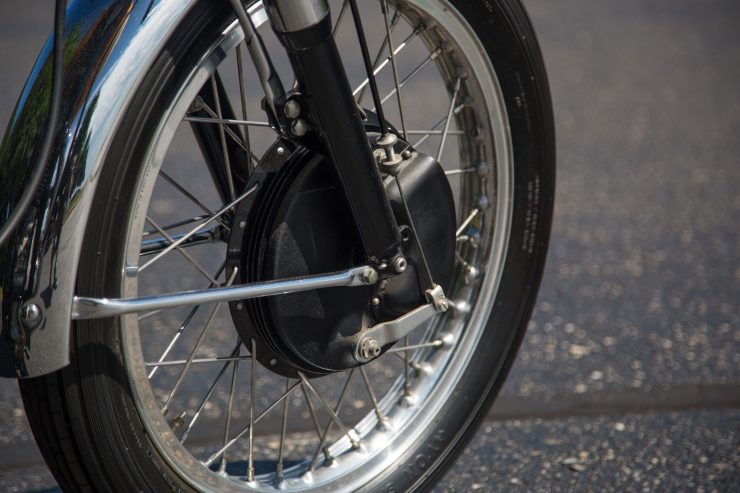 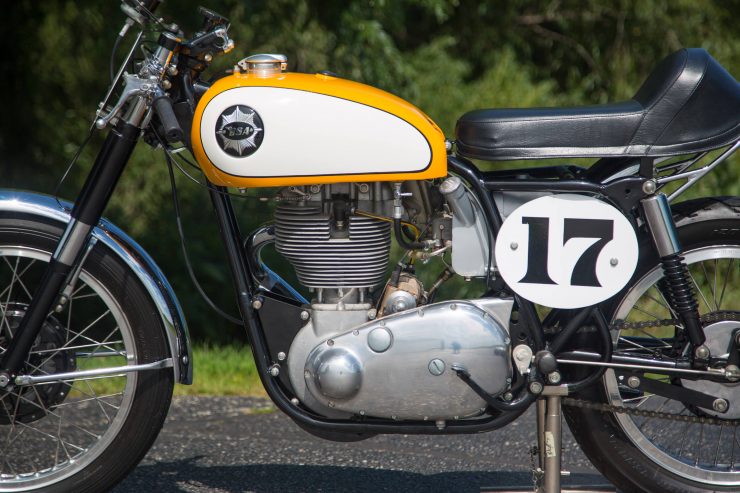 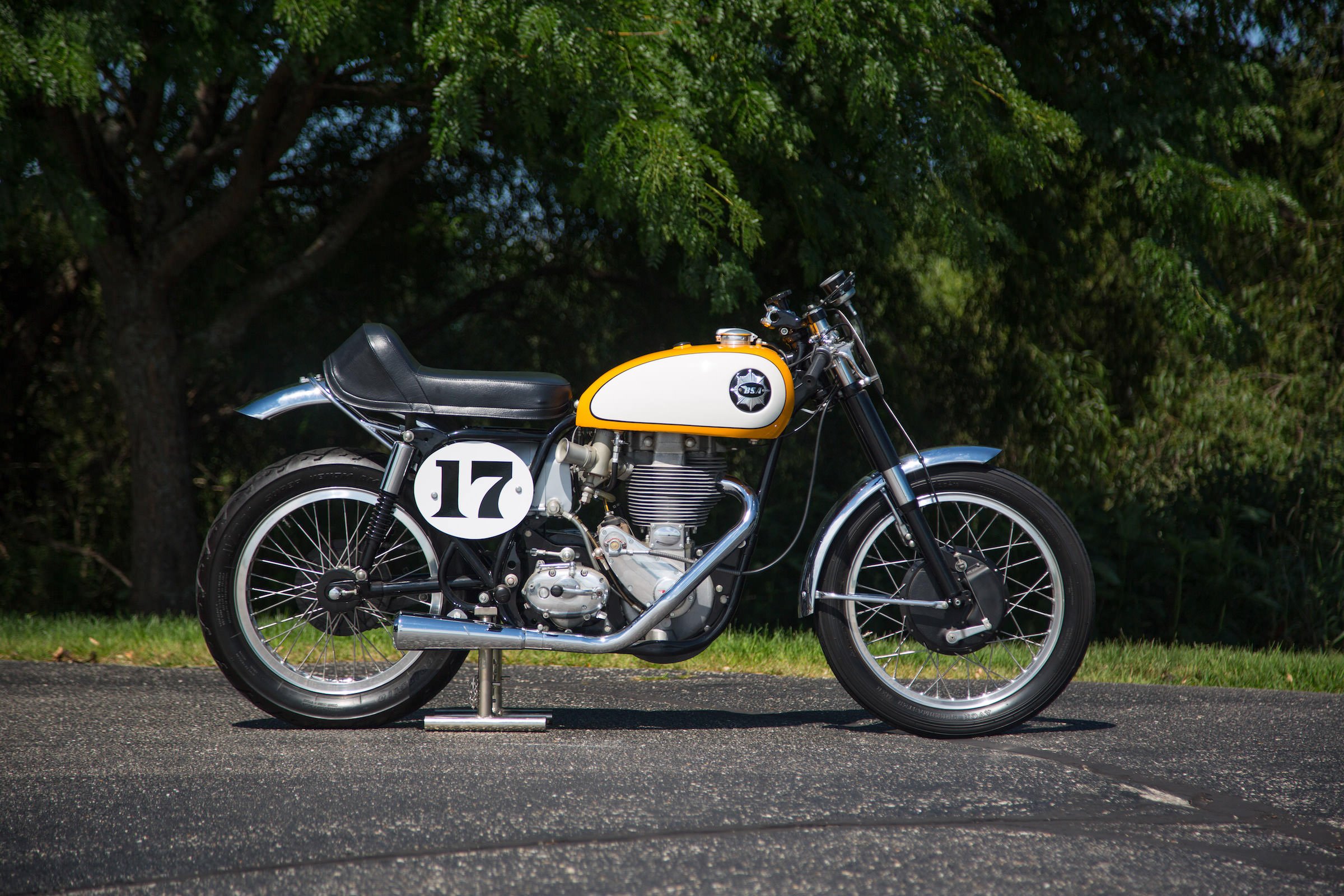