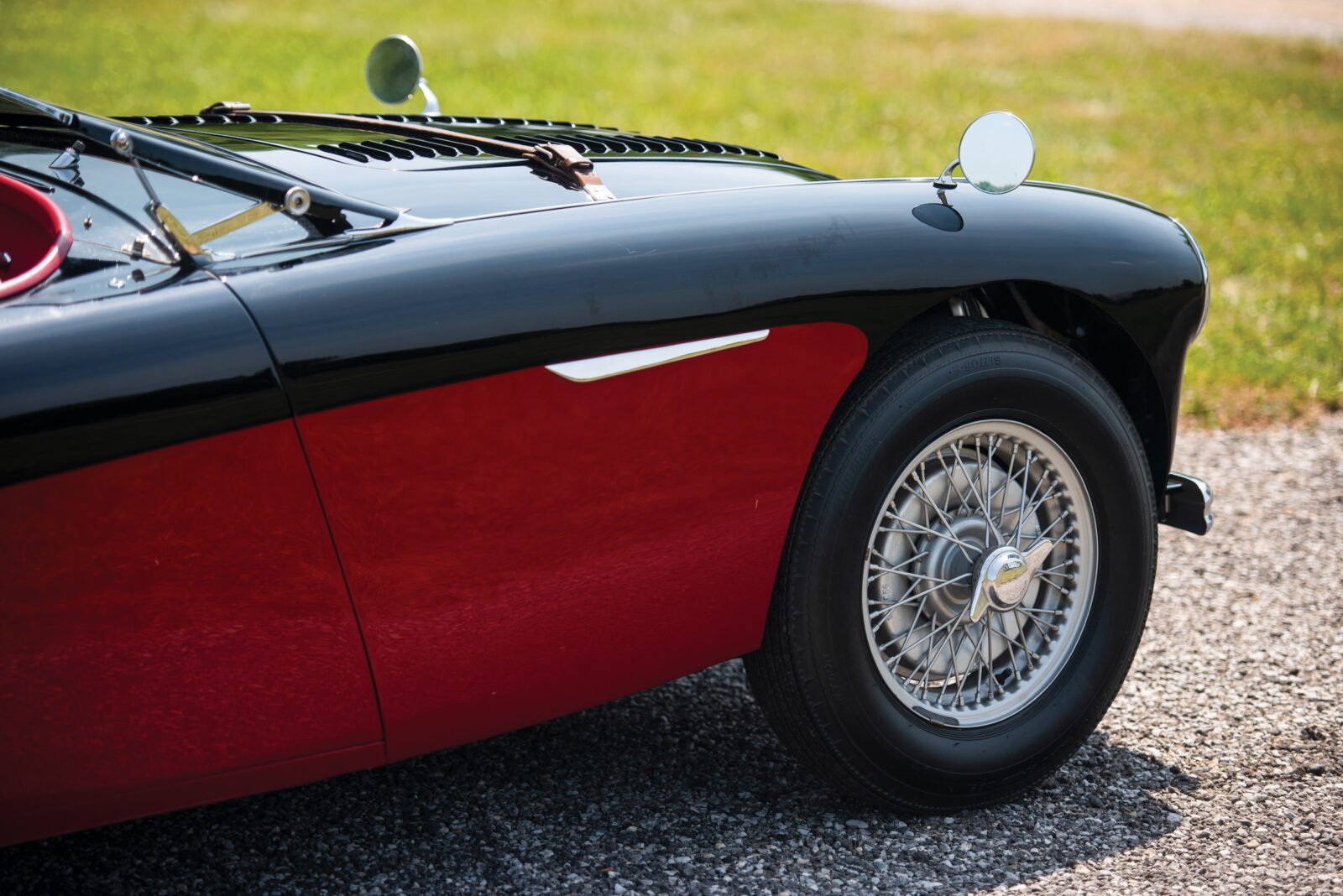 Amazingly the designer behind the low, sweeping roadster wasn’t actually a designer and he had no prior design experience. His name is Gerry Coker, he’s a humble Englishman who’d been hired by Donald Healey as a body engineer – the guy who figured out how to make and fit the panels together, then onto the chassis.

There were no designers at Healey, so when the concept of the Healey Hundred (as it was first called) was conceived, Donald told Gerry to take a swing at it and see what he came up with. The name was chosen because the new car would be capable of comfortably reaching 100 miles per hour. The basic plan was to use pre-exisiting Austin A90 suspension, brakes, drivetrain, and ancillaries to keep costs down, then design a lightweight chassis and body in-house. 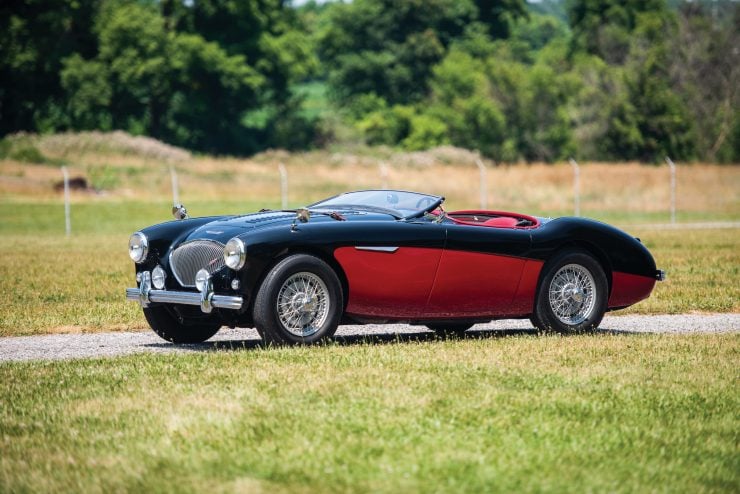 Gerry set to work immediately with no small sense of trepidation, he penned the design completely by himself with no outside input, not even letting Donald Healey see the design until he was completely finished with it. Once completed the design was converted to blueprints and sent off to the coachbuilders for construction – there was no scale model made, the car went directly from paper to reality.

Once the body had been fitted to its chassis and the running gear was installed, the car was sent to the 1952 London Motor Show to gauge the public perception of the new model. Despite initial trepidation from Donald Healey, the public perception was overwhelmingly positive, in fact people were attempting to write cheques on the spot and wanted to know when they could take delivery. 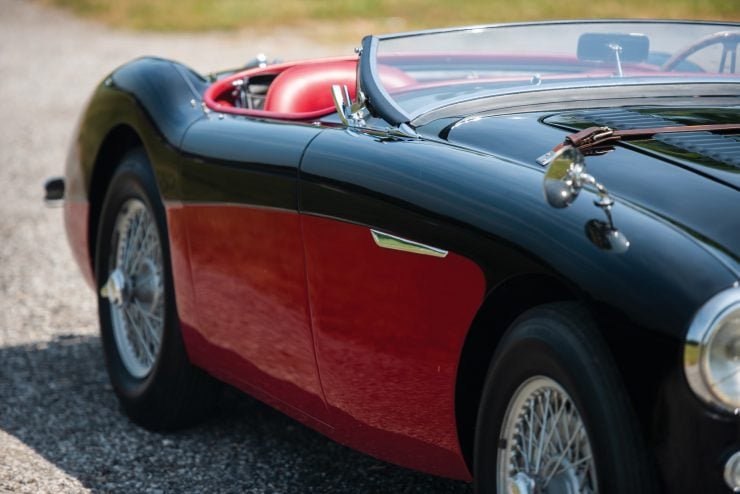 Perhaps the most enthusiastic person at the show was Sir Leonard Lord, managing director of Austin. He had been looking to replace the poorly received Austin A90 and the Healey Hundred was a godsend – it was simple to build, it looked beautiful, and it used Austin A90 running gear.

Sir Lord and Donald Healey quickly made a deal to build the car, it would be called the Austin-Healy 100, and its target would be the lucrative US market – particularly California.

Once the papers were signed production began in 1953, the plan was to sell thousands of them and Donald knew he didn’t have the facilities to build them all – so the bodies were made by Jensen Motors, then given their Austin mechanical components at Austin’s Longbridge factory. 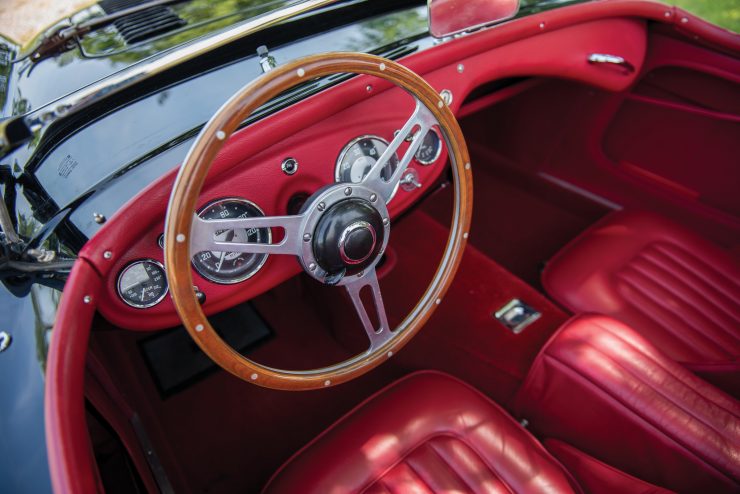 After the mid-1950s launch Donald Healey took an Austin-Healey 100 and a special supercharged streamliner (also designed by Gerry Coker) to the Bonneville Salt Flats. Healey was a former racing driver having won the Monte Carlo Rally driving a 4½ litre Invicta in 1931, he had also driven a Nash-Healey at the 1950 24 Hours of Le Mans (4th in class), and he had finished first in class in the Mille Miglia.

Donald hired racing drivers Carroll Shelby, George Eyston, Roy Jackson-Moore, and Mort Morris-Goodall for his all out record-breaking assault on Bonneville. The men broke a slew of records with both cars – the stock Austin-Healey doing incredibly well in the fields of both endurance and sustained top speeds.

These new records garnered the Austin-Healey positive headlines around the world, cementing the reputation of the car in the mind of the public, and proving itself to be a popular alternative to the highly complex (and oftentimes unreliable) engines that were commonly fitted to sporting European roadsters.

This Austin engine is relatively simple mechanically, with pushrod actuated overhead valves, solid iron construction, and twin carburetors. It produced a respectable 90 hp, which was fed back through a three-speed gearbox (with overdrive on 2nd and 3rd) to an underslung axle.

Front suspension is independent with double wishbones and coil springs, in the rear there’s a solid axle with semi-elliptic leaf springs. Girling 11 inch drum brakes are fitted on all four corners and the top speed was tested in period at 106 mph, with a 0-62 mph time of 11.2 seconds.

The “BN2” model sub-designation would be released in 1955, recategorizing the earlier car as the “BN1”. The BN2 was largely the same, now with a four-speed gearbox (still the overdrive on the top two cogs), larger front wheel arches, and a newer rear axle. 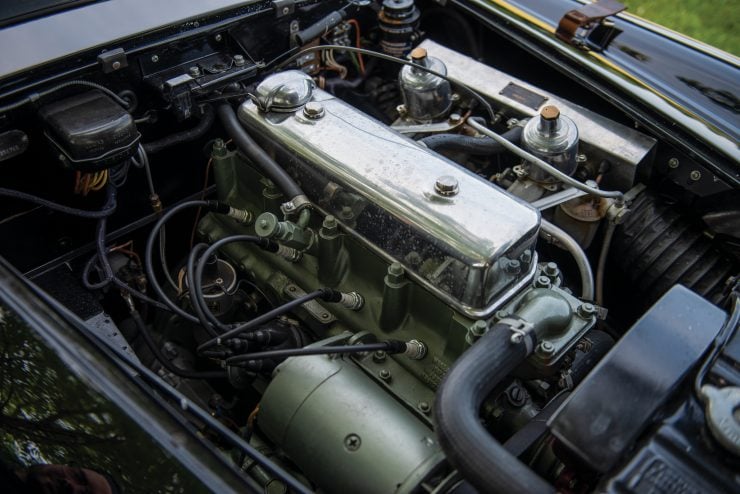 The car you see here is a 1956 Austin-Healey 100/4 BN2, and it’s been fitted with the highly-desirable “Le Mans” performance kit.

The company had launched the Austin-Healey 100M in 1955 with bigger carburetors, a cold air box, a high-performance cam, and 8.1:1 compression-ratio pistons. Power was increased to 110 hp, and the company offered the same parts as a Le Mans Engine Modification Kit, that could be ordered from the factory and installed at home or by your local mechanic.

This particular car was converted to “Le Mans” specification in the 1990s and re-painted in the classic 100M color scheme of two-tone red over black, the interior was then retrimmed in the original color of red leather.

Recently the car was shown at the California Healey Week and the 17th Annual British Car Show, it won 1st in class at both events and it’s presented now in the same overall condition. 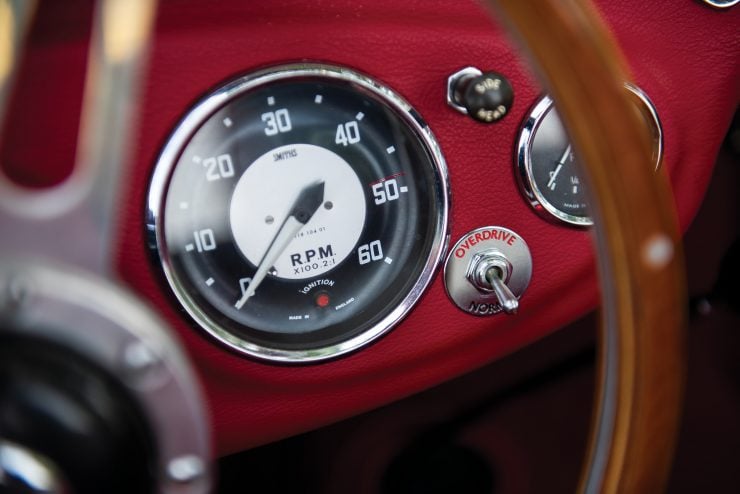 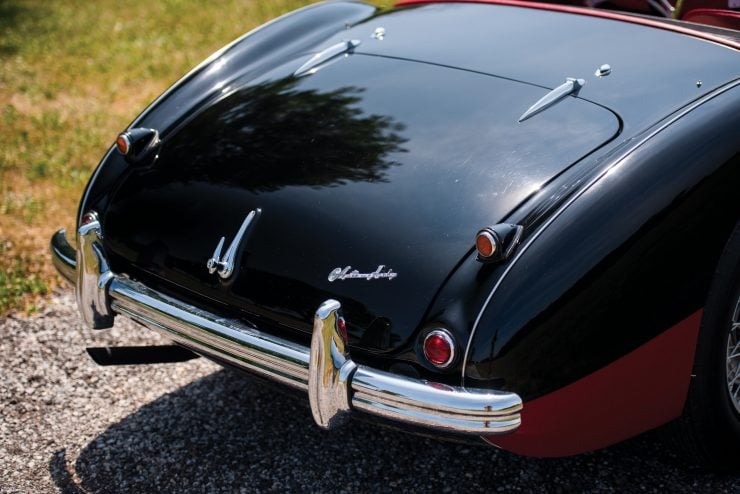 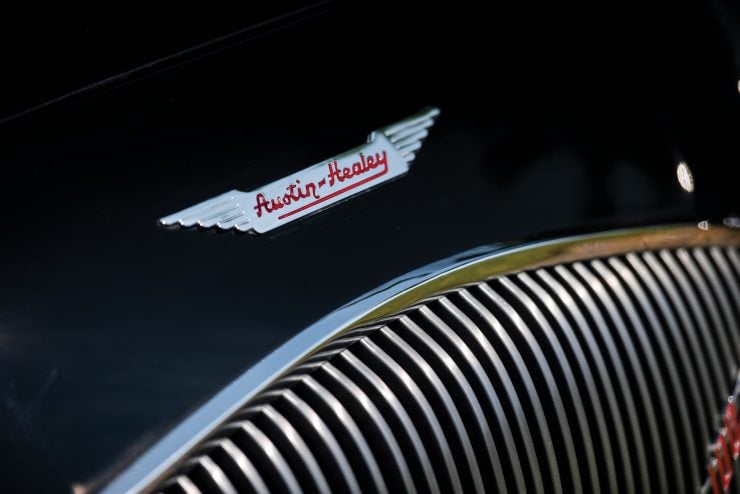 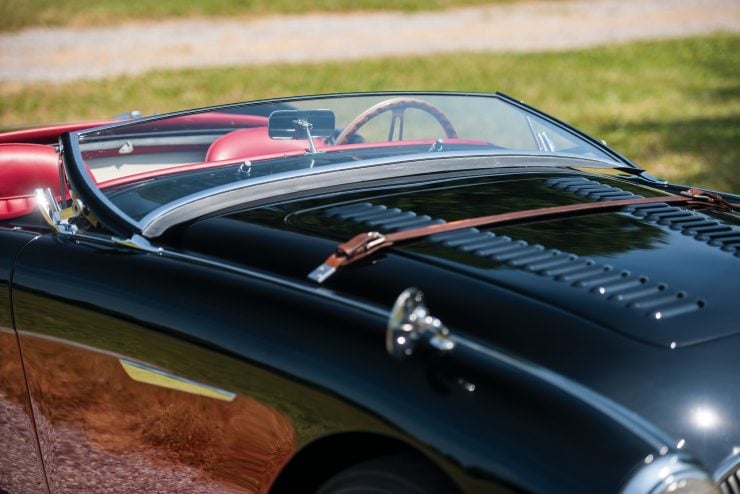 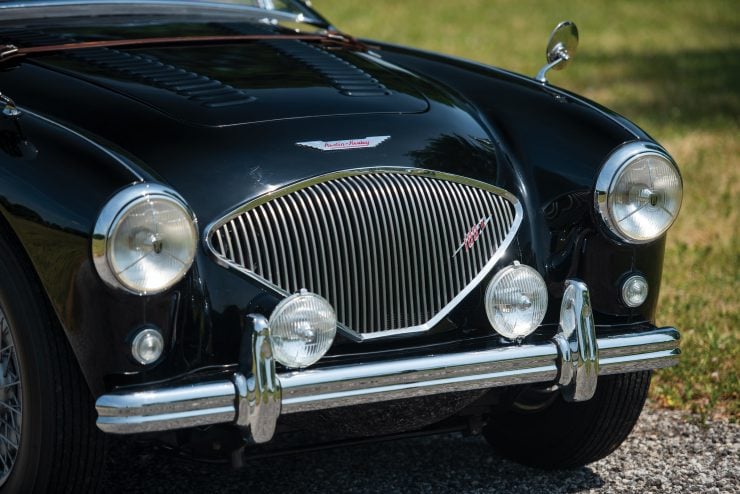 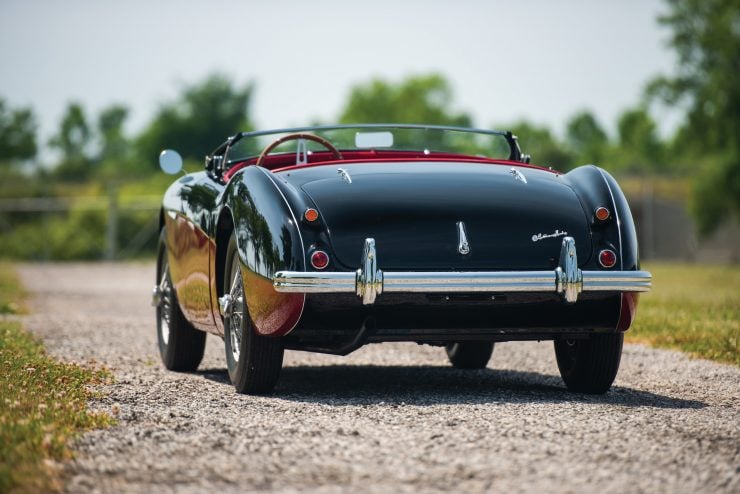 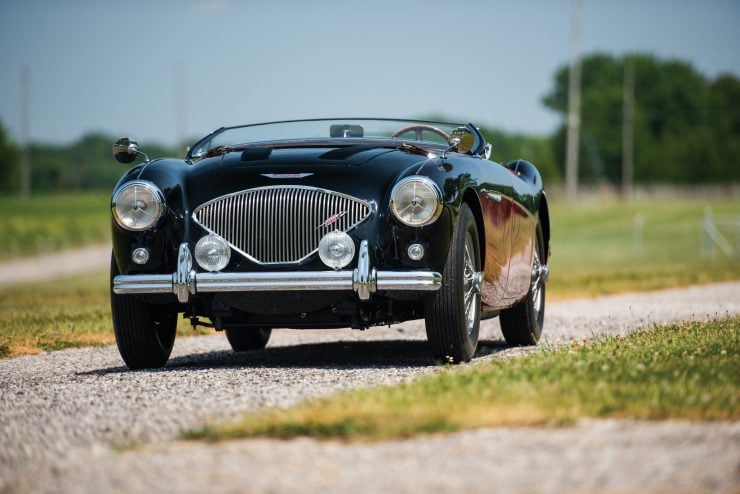 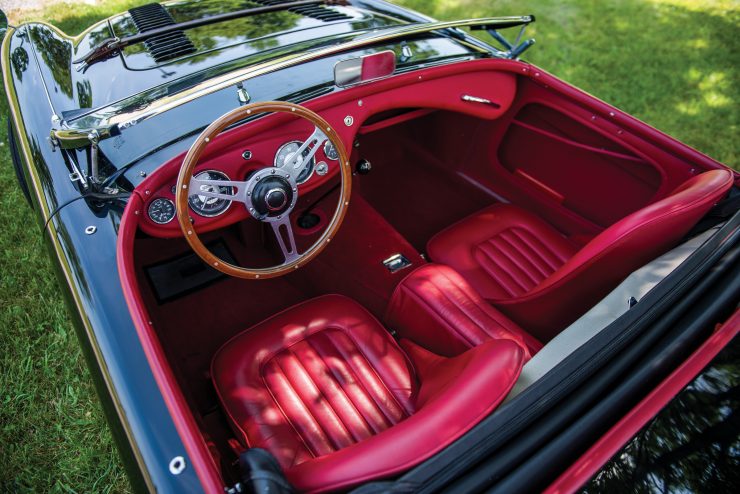 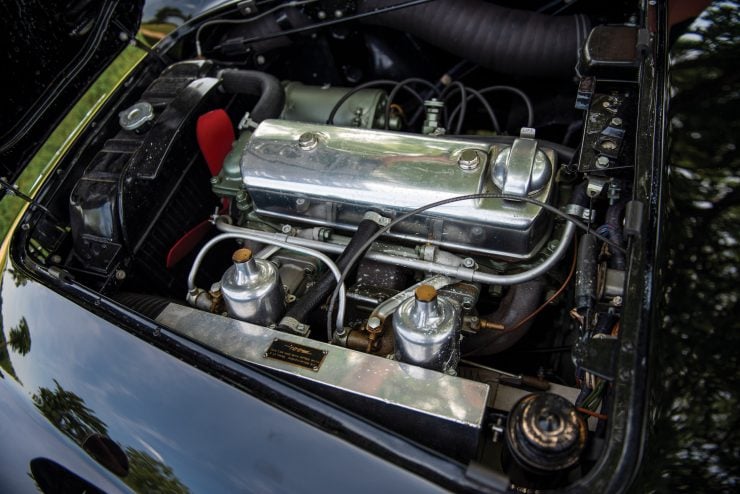 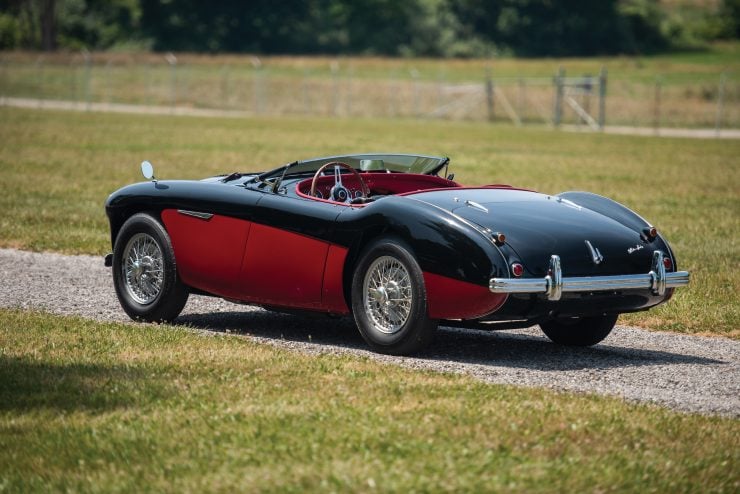 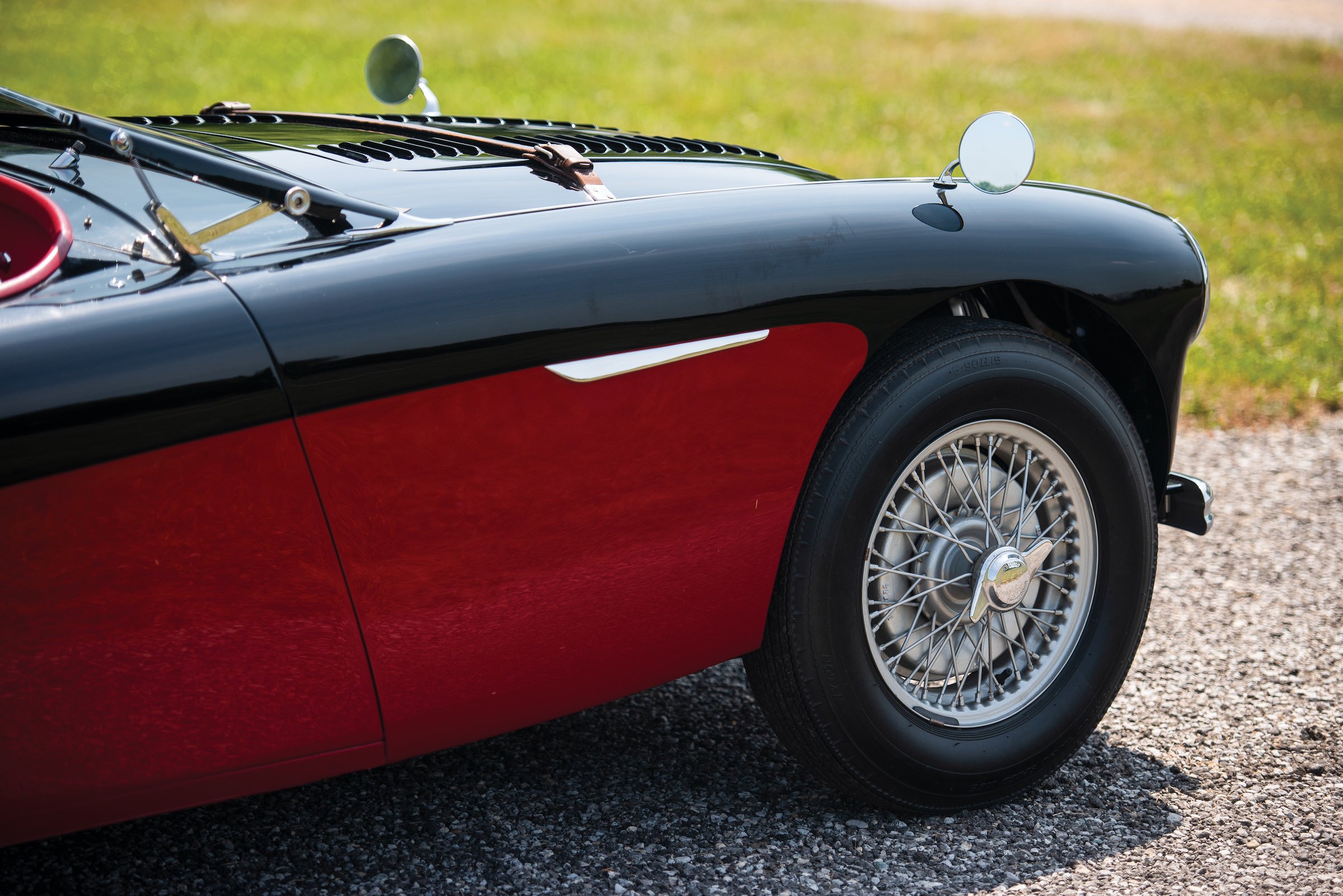