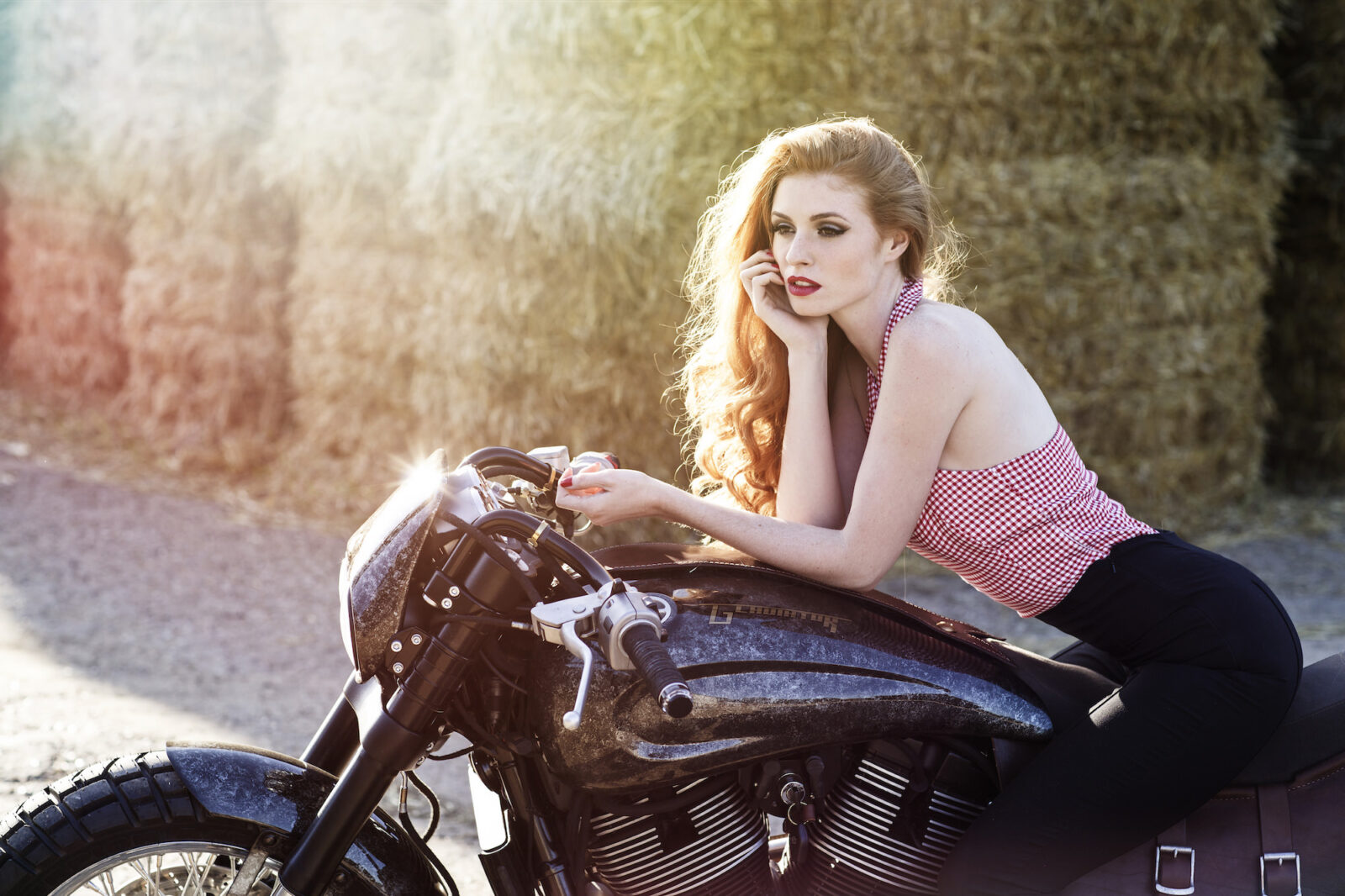 Every now and then we get the opportunity to run a story on a custom motorcycle that was written by the the team that built it – The following article was written by the talented team at Old Empire Motorcycles and includes original photography by Vaughan Treyvellan.

We have found in previous experience a build can develop in a couple of different ways. Sometimes everything falls into place naturally as the build progress’s and without sounding overly arty, the bike kind of builds itself. However there are other times our bikes take a little more deep thought in making sure everything comes together correctly, especially when based upon a predetermined concept. Its one thing drawing something in pencil and something else entirely making it work!

The Gladiator was actually our first commission based on a concept drawing we do alongside our very talented artist Martin Squires. We’ve learnt a considerable amount since then and its amazing to think that we have finally managed to create something rideable and useable from those early scribblings!

The customer came to us with the brief of wanting a custom motorcycle able to tour around Europe on, nothing less that 1500cc and a v twin. Really that gave us two options at that time: Harley or Victory. We’re always one to back the underdog and seeing as the world is already awash with plenty of Haley customs of all shapes and sizes it was decided a 2007 Victory 1650cc Hammer was a suitable candidate.

Work started with the removal of all the unnecessary’s. First guards and bodywork, bars, seat , exhausts etc all to which amounted to an average motorcycles weight in itself! The standard hammer runs cast alloy wheels, narrow at the front and HUGE on the back, not being a fan of this unbalanced look we promptly removed both and replaced them with 80 spoke dual flanged rims which then were machined to adapt to the standard pulley at the back and brand new floating discs specially made for us by Harrison Billet. Finally to get that aggressive feel but still keep the motorcycle wholly usable the rims we shod in Pirelli Scorpions front and back. 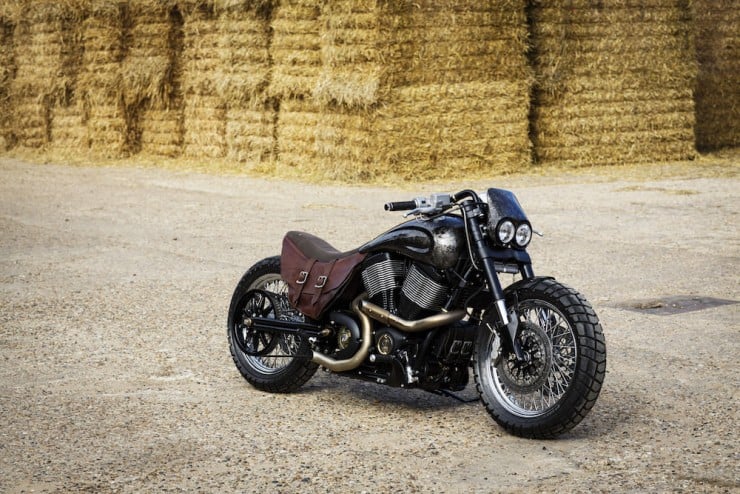 A new swing arm came next with our own machined axle plates in place of the oversize cast alloy one to tie into the rest of the tubular frame along with extended portions of the original frame. New swing arm and wheel spindles finished it all off nicely.

At the sharp end we re-engineered the internals to drop it an inch to get a nose down stance (although this sounds simple, an unbelievable amount of work is required to make the forks function properly yet sit lower) The top yoke was removed and a fresh billet one machined with integral warning lights and two aluminium housings machined to fit the two new custom made Smiths x OEM chrono speedo and tacho. The front guard was then cut down to a suitable size.

The dual headlights sat nicely in the wide fork width and once shrouded with simple cowling it brought everything together well. The bars were an idea formed by the need to keep the top yoke clear of clutter to see the speedo etc but the customer also wanted a riding position that was not too leant forward resulting in this setup that seems to work well both aesthetically and ergonomically. 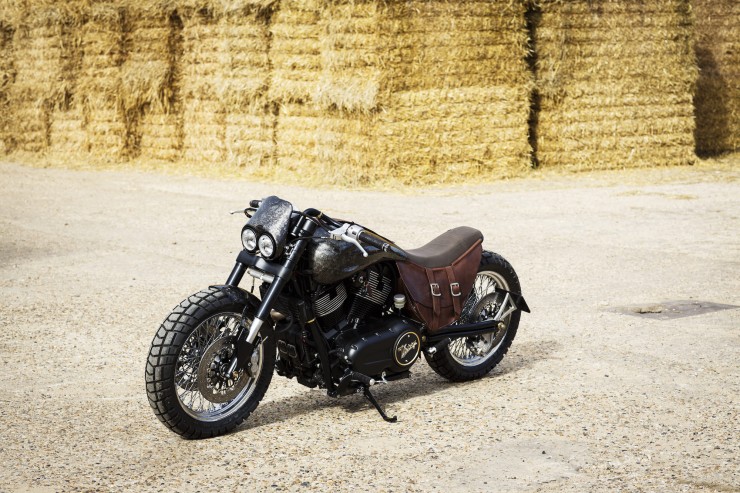 The original rear subframe was then removed so we had a fresh start at a new bolt on section we had to tie in cleverly to get the simple lines of the concept, but retain a wide enough seat for comfort. An added complexity was when we found out that the stock frame was a twin spar design meaning there are two top tubes that splay out from the head stock (imagine a Ducati trellis type layout) meaning that as in the design where we want to drop the tank nice and low to get that curvaceous line would reduce the fuel capacity from around 17 litres to around 4…. What a ball ache.

We had already committed to making her look as we intended so we spent an enormous amount of time fabricating an under seat fuel tank and relocated the fuel pump there too, and on the other side we made an electrics box. So what you are looking at in terms of the leather panniers on the side is actually a fuel tank on the left and the lecky box on the right. Mind you they are still useable panniers too (the brief was the customer needed the ability to carry a bottle of wine and map, we made it so he can carry double just in case…)

The old tank was narrowed and gutted and a new inner put in with balance pipes, tap, internal breather and our own billet filler caps. The tank also features tie points along the underside of it so a tank bag can be used if needed. You may ask how you know how much fuel you have as the under seat one is hidden and sealed, well cleverly the pump uses a low fuel sender within it and that’s hooked up to one of the new LEDs in the new ‘dash’ cluster. 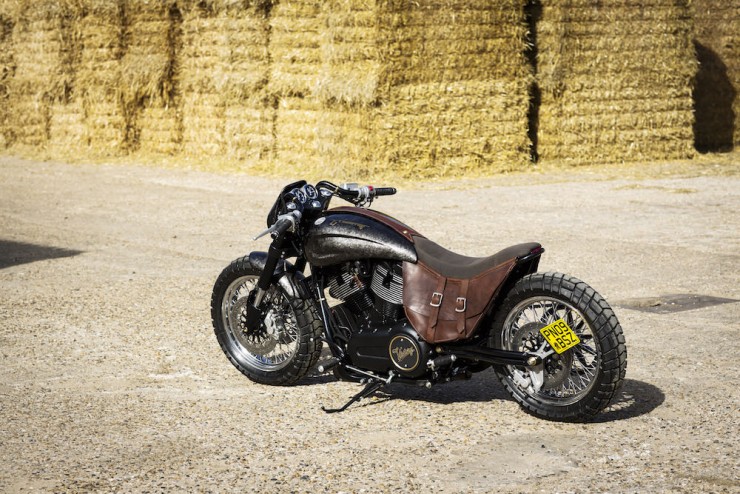 The rear end was finished off with a simple LED light we have used on a few of our builds now and a side mount number plate we doubled up as an axle spacer. We also mounted a new set of folding custom pillion pegs off of the engine too.

The electrical system as said before was relocated to the new box acting as one of the panniers and the battery mounted in a leather satchel at the front of the bike. Simple but effective Motogadget bar end indicators blend in really well with our ‘rough cut’ leather grips and finally as she is to be a tourer a quick connect C Teck adapter installed alongside a 12v usb and sat nav charger mounted in front of the tank.
All the controls remain the same other than being stripped and vapour blasted apart from the ignition barrel which has been relocated alongside the new micro switches that control the smiths clocks. Foot controls remain stock although they have all been re-sheathed again with our rough cut leather grips.

Exhausts were fabricated from stainless and proved difficult to get a balance of not burning your legs to pieces, keeping both pipes approximately the same length and making them look and sound good! Big bore tubing was chosen along with some mini baffles and we opted to exit both of them one side as the battery fouled getting the front pipe out the other side. The end result though is most pleasing and it sounds raucous!

The whole bike was then torn down to its last nut and bolt, and The finishing touches were laid down in the form of a custom paint work by Greg at Black Shuck Customs , a powder coated frame and components, little touches of brass and two ceracoated engine covers engraved with our motif and victory respectively. Leather work was all done in house – panniers, satchel and grips along with some fine upholsterers done locally with our specially sourced waxed cotton which finished it all of beautifully.

It was nerve-wracking to say the least when we fired her up for the first time as I fully expected the under seat fuel set up to spew fuel everywhere but not a drip was in sight and the upper tank feeds the lower beautifully. Other than that, a Power Commander was installed so we could tune her up with the new filter and exhaust setup and she sounds and rides great! Keep a look out for her on the continent! 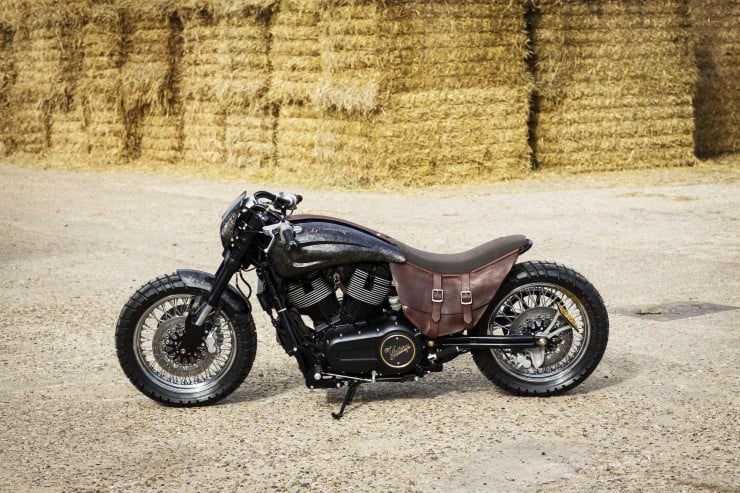 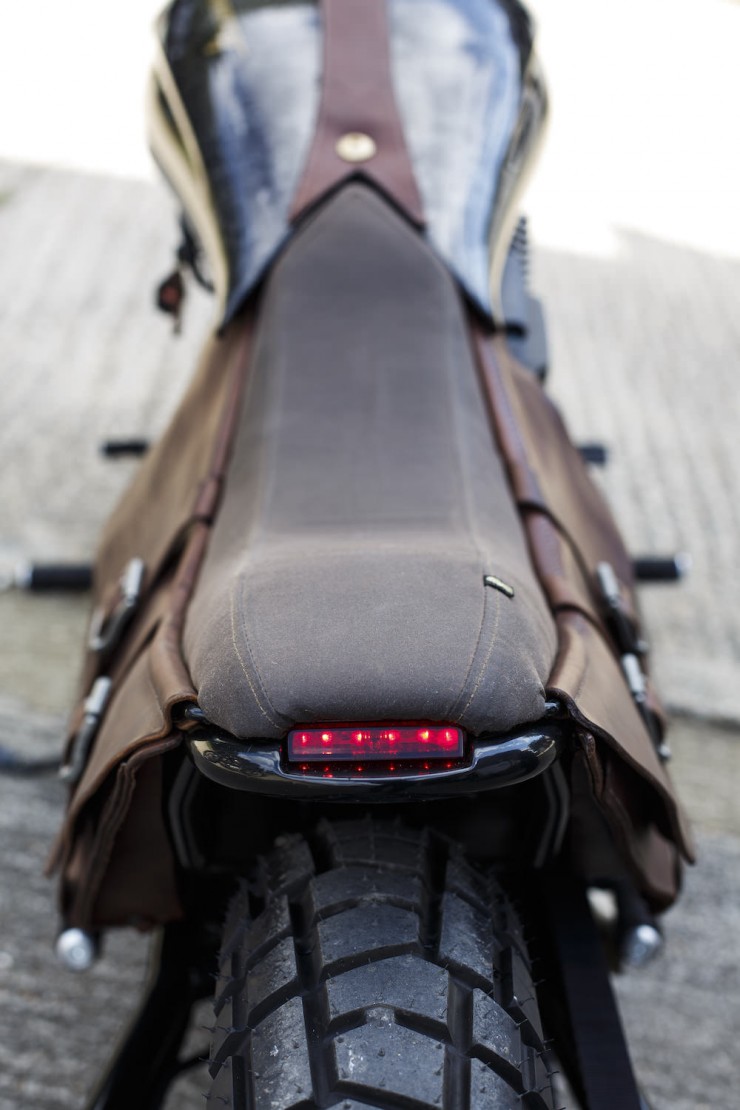 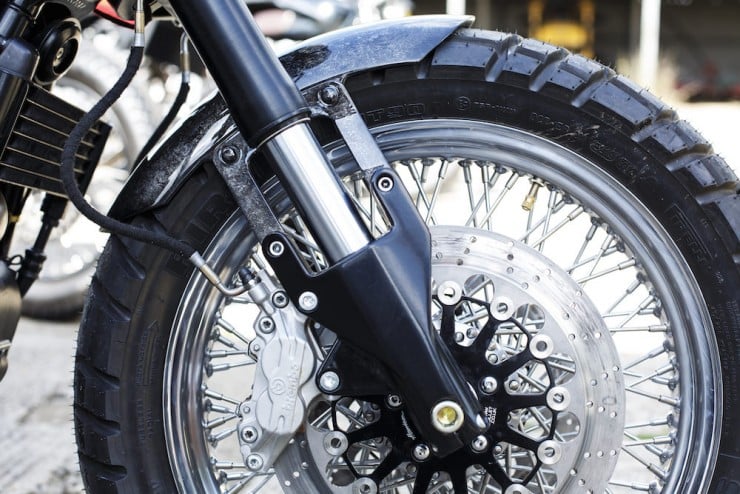 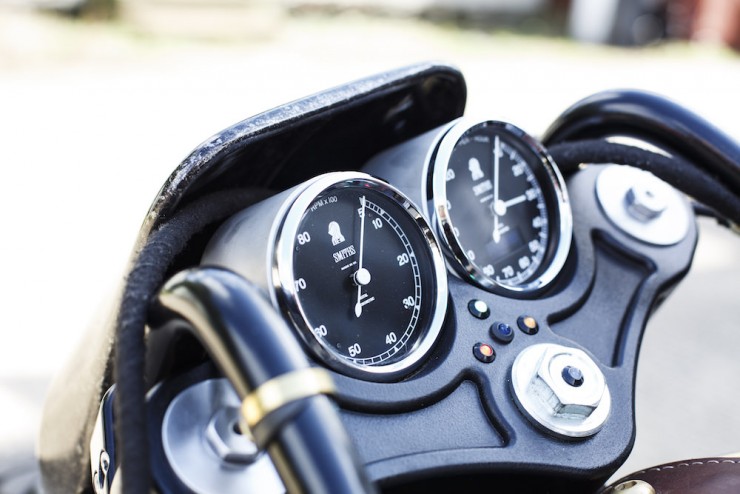 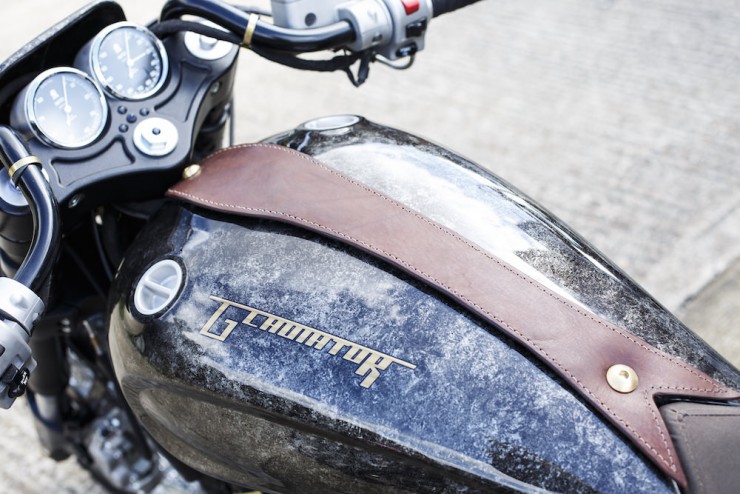 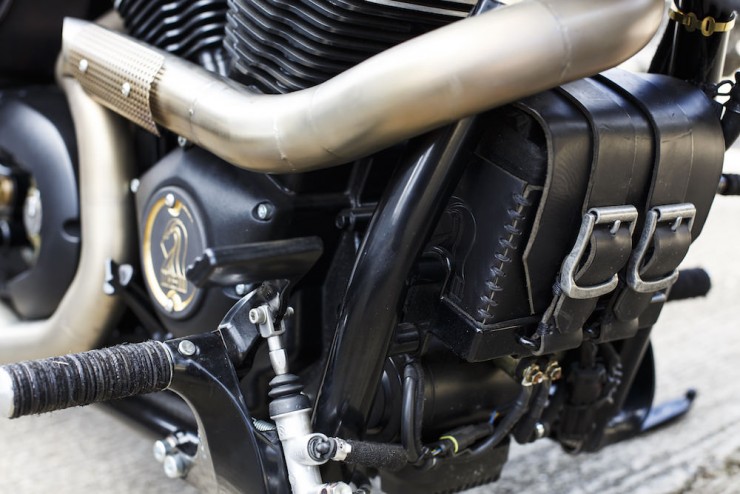 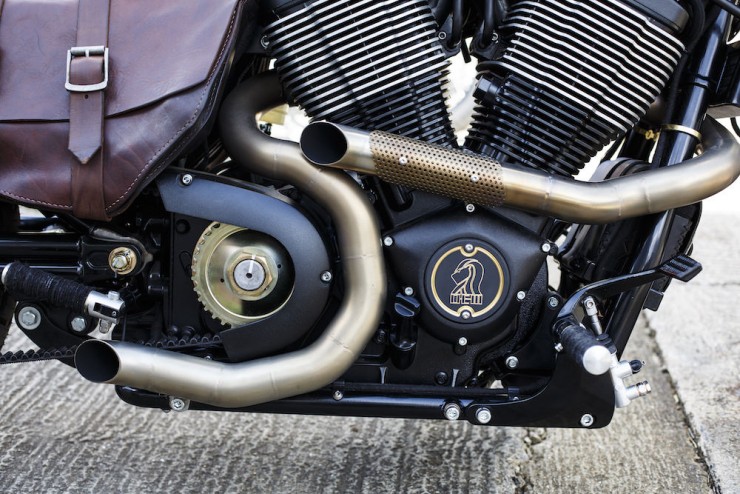 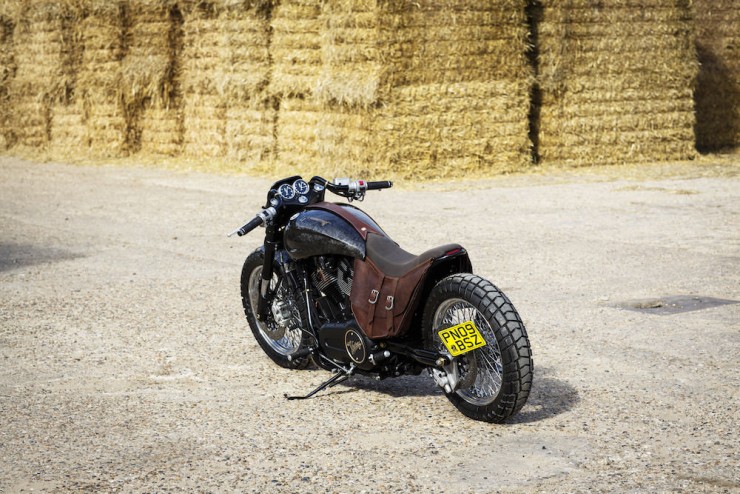 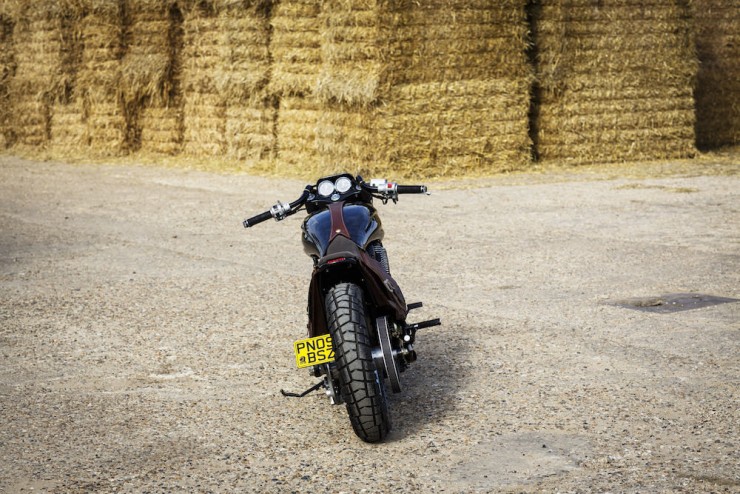 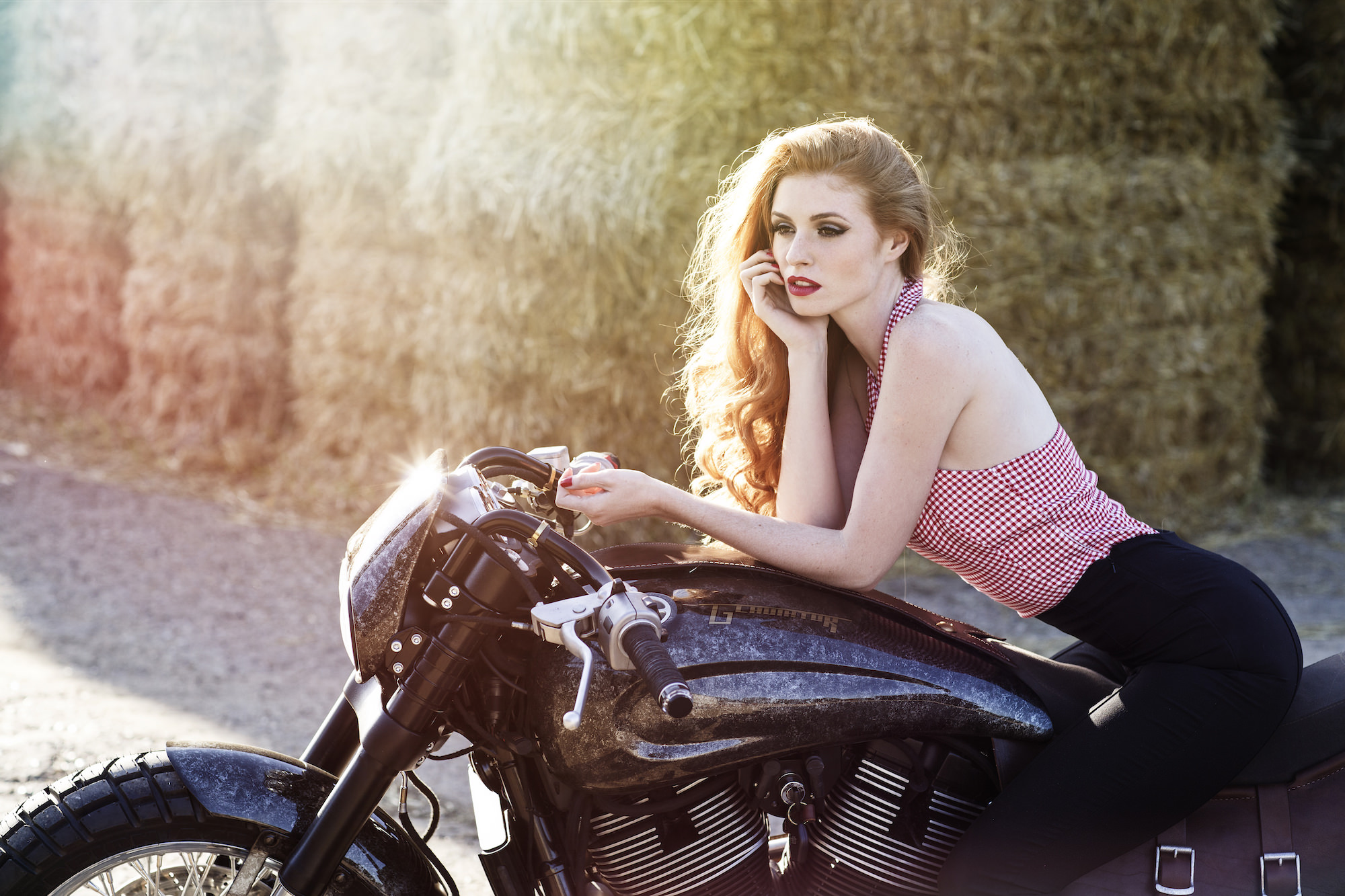