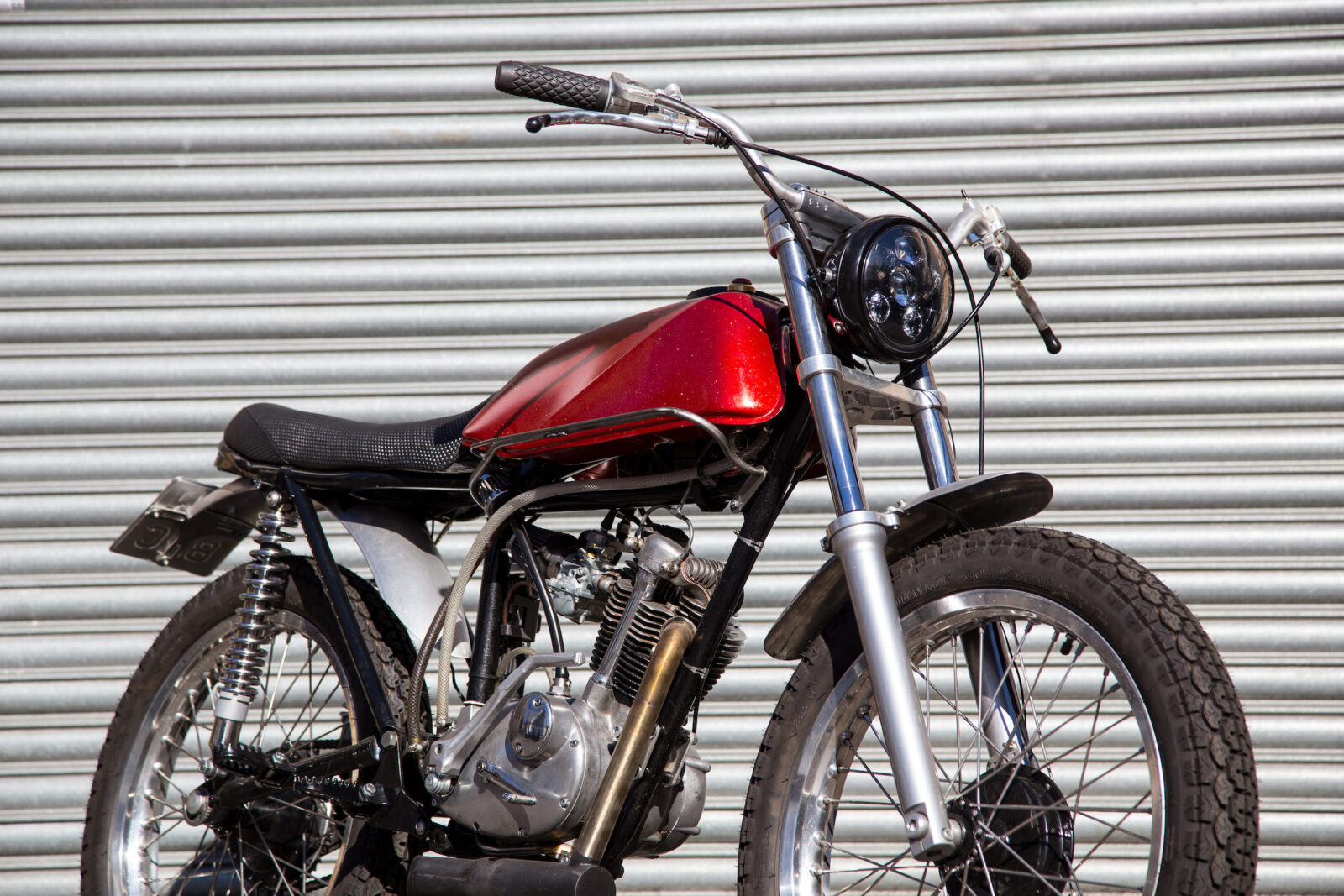 The Triumph Tiger Cub was the first motorcycle ridden by many young motorcyclists in Britain, not to mention Australia, New Zealand, South Africa, Canada, and the USA.

The Tiger Cub was a dominant small-capacity motorcycle in the 1950s and 1960s before the tsunami-like influx of cheap and cheerful Japanese motorcycles. It was a time when Britain was the number one motorcycle manufacturer in the world, and Triumph was one of the most successful of the mighty British marques.

Triumph Tiger Cub first appeared at the Earls Court Motor Show in 1953 before going on sale in 1954, it shared the frame and forks of the Triumph T15 Terrier, now fitted with a new T20 199cc single-cylinder engine. 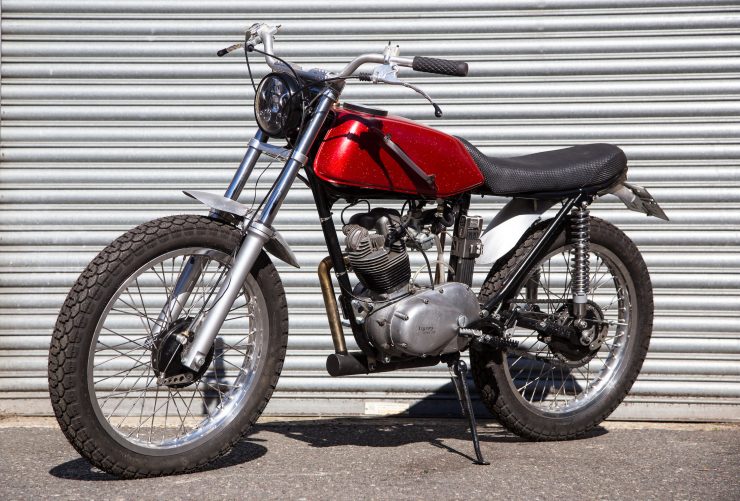 Triumph developed the Tiger Cub as a dual sport motorcycle of sorts, it could handle light scrambling duties with aplomb and it was well-suited to road use so long as speeds were kept under 50 mph. The original T20 engine was capable of 10 bhp at 6000 rpm and the higher-compression T20S engine could manage 14.5 bhp.

Unusually for the 1950s, the Tiger Cub featured unit construction, with a 4-speed gearbox, an oil bath primary, an a chain final drive. Triumph produced the Tiger Cub in very high numbers, the upside being that they remain inexpensive to this day, making them an ideal first motorcycle, an excellent second motorcycle for those who want something fun for the weekends.

The following was written by Adam Kay of Untitled Motorcycles.

The Cub is the same age as me. My wife bought it for me as a birthday present. It was a runner, but a bad runner – and a tiny bike with 17” wheels. I looked like a giant riding it so I decided to rebuild it to suit me.

First job was to replace the wheels with 19” rims on the original hubs, some new forks and yokes from a Bob in Yorkshire who specialises in Tiger Cub trials bikes UPB.  I put new Hagon shocks on the rear. 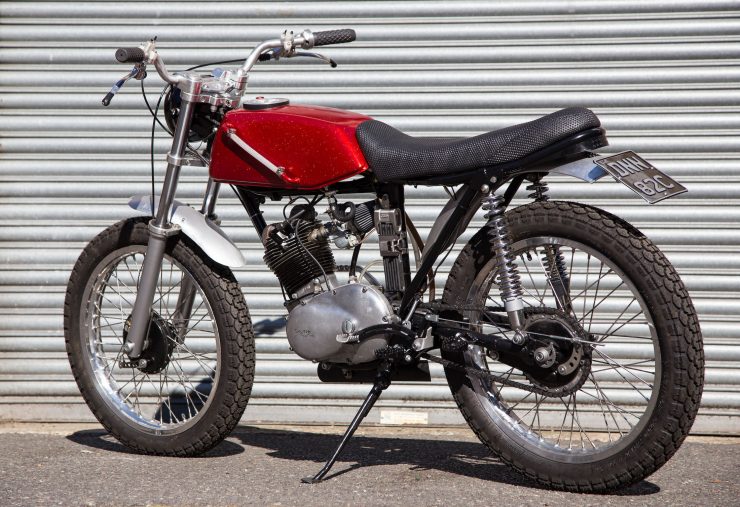 I chopped up some Renthal handlebars, cut them into two sections, then joined them by means of a clamp fitting that inorporated the Motogadget speedo. Dom Roup of Brighton Motorcycles modelled the bracket first in 3D printing, then Fastec produced the final version.

The switchgear block was 3D printed and is really durable – as well as looking really different. I improved the front brake with new linings.

It has off-road trials pegs which are rear-set compared to the stock Cub. Originally, I made up a hand-change system, hence the metal work on the right side of the petrol tank, but it didn’t work very well so I ditched it. It means I now have to take my foot off  the peg to change gear so I may well come up with an alternative gear shift set-up. Kickstarter is off a KTM.

The engine has been rebuilt using an oversize piston so the capacity now is 250cc. I now run an external clutch arm which works much better – It’s got a new Mikuni carb and a hand-made the silencer with no baffles.

I fitted electronic ignition. There’s no charging system though so the industrial size battery (designed to power a drone actually) is there to power the lights and lasts 24 hours. It’s easy to swap the pack over though.

I added the ‘full or f#@ked’ pipe fittings on the outside of the fuel tank then got the tank powder-coated with glitter flake by Steve at Aurum Finishing.

The bike now the bike fits me a lot better, looks lovely and is great to ride! 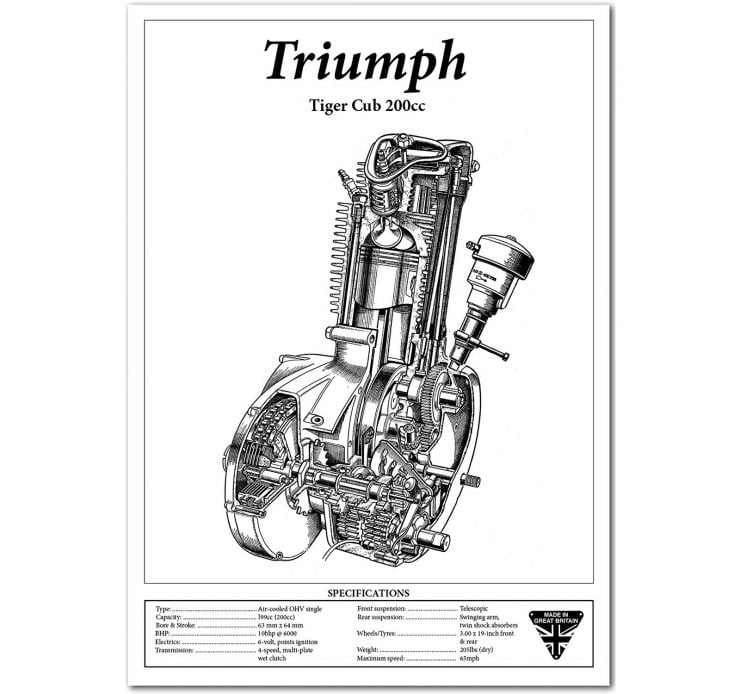 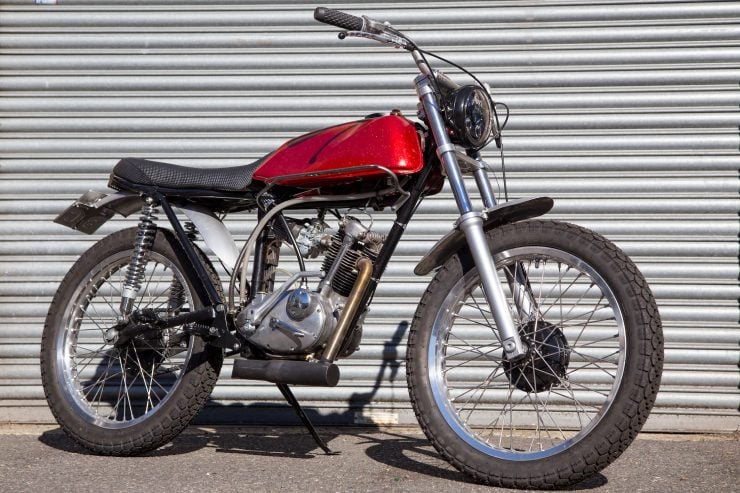 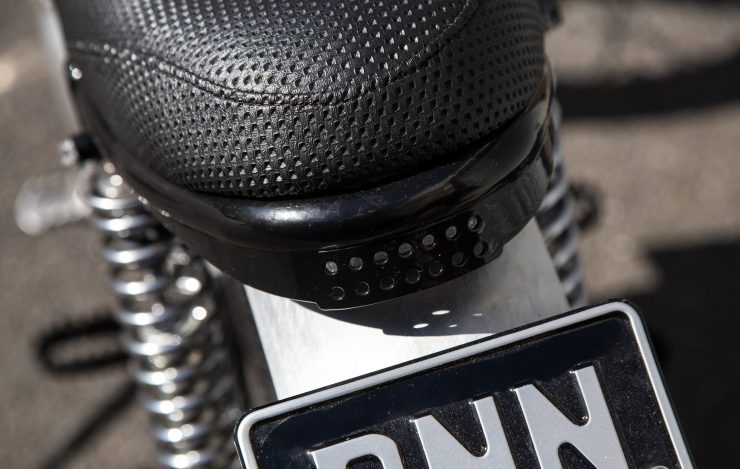 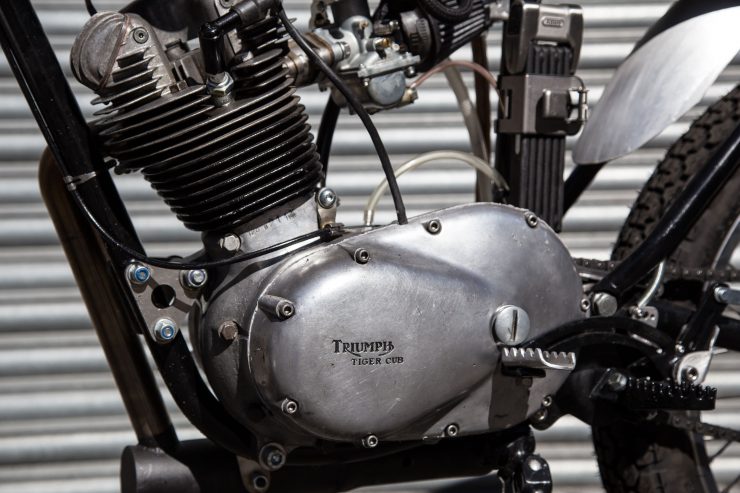 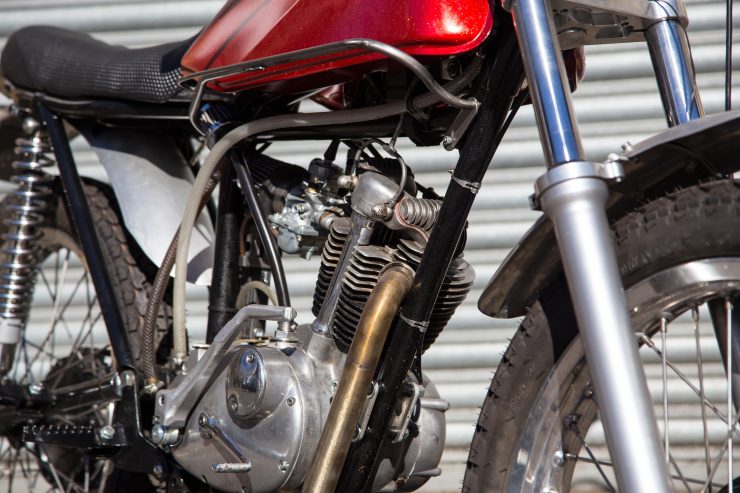 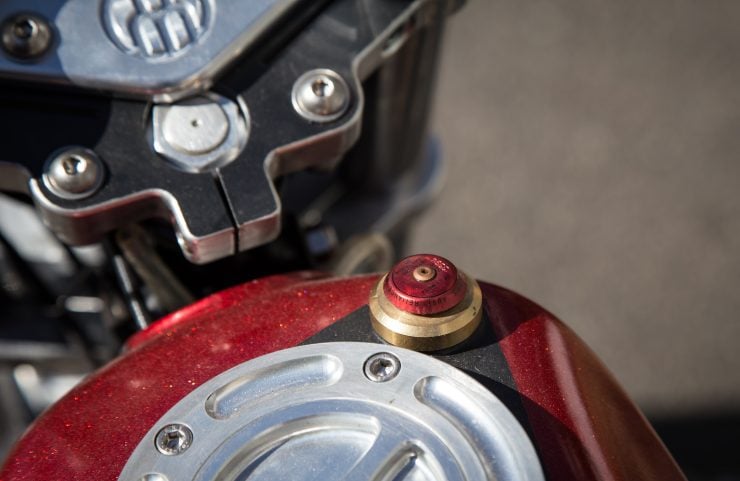 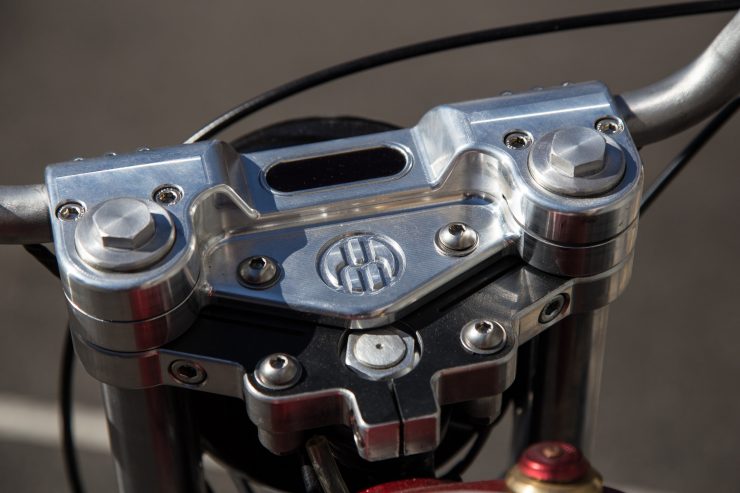 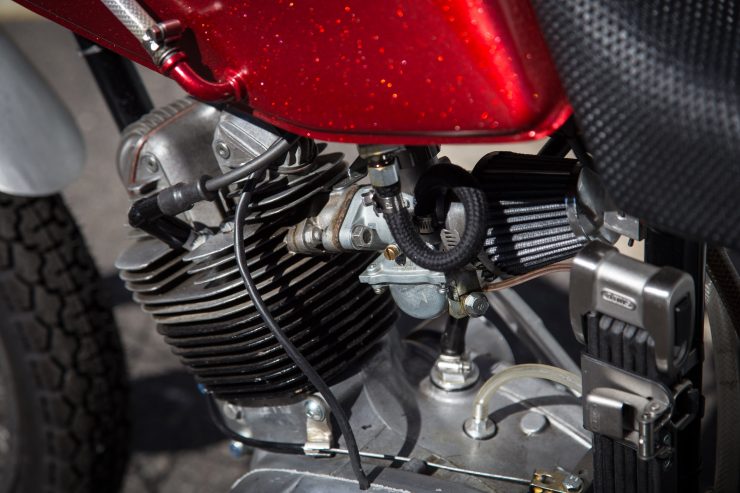 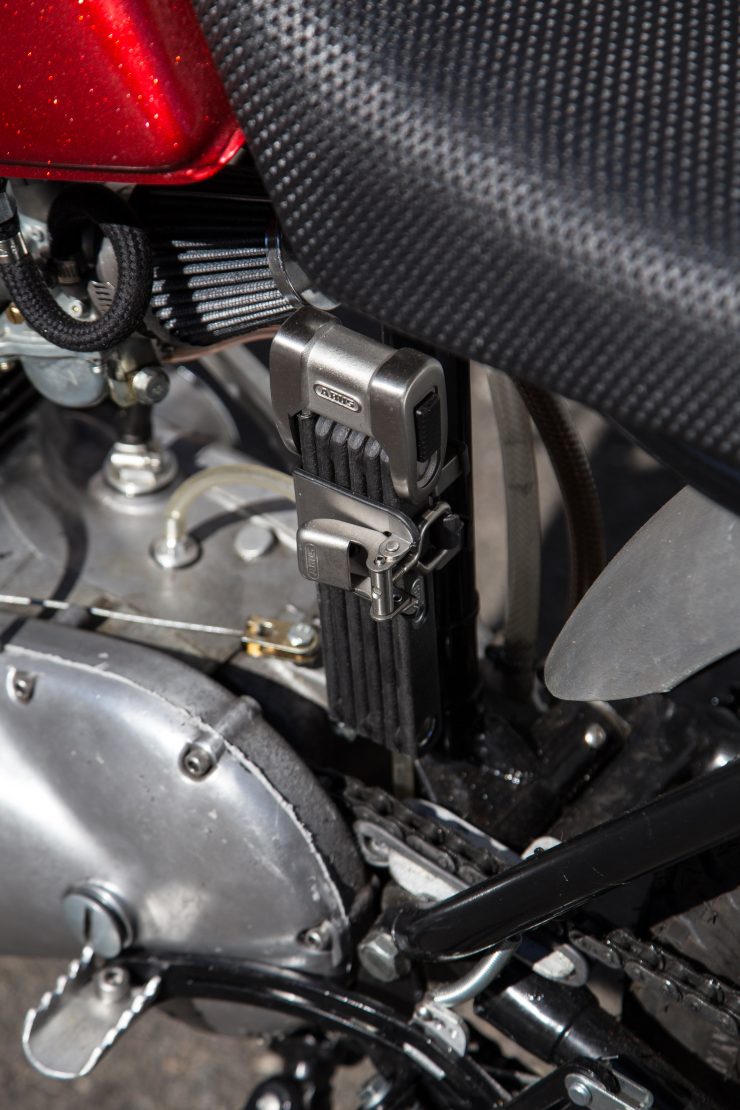 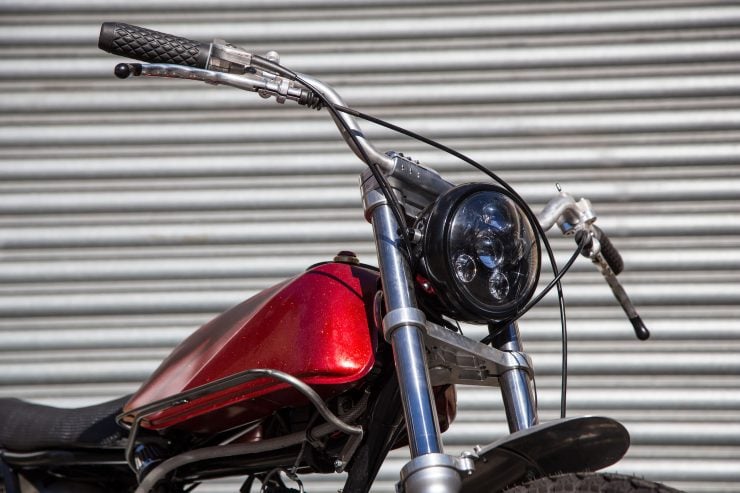 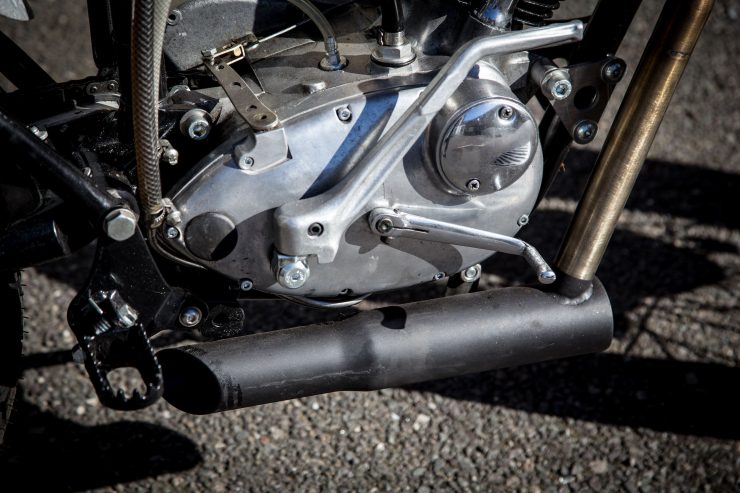 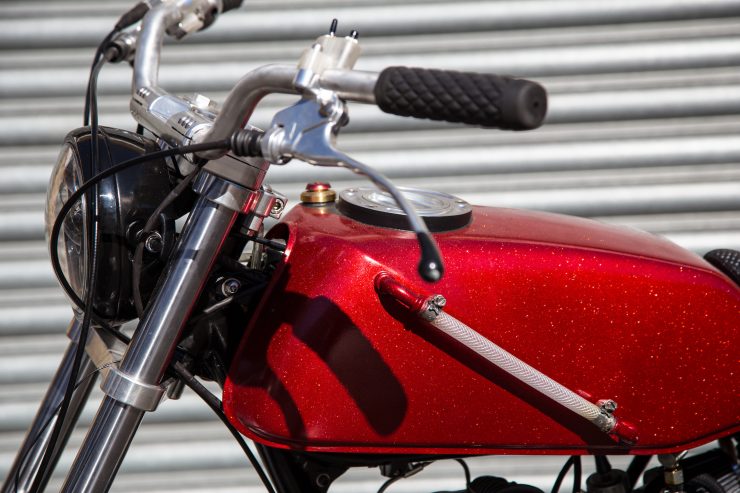 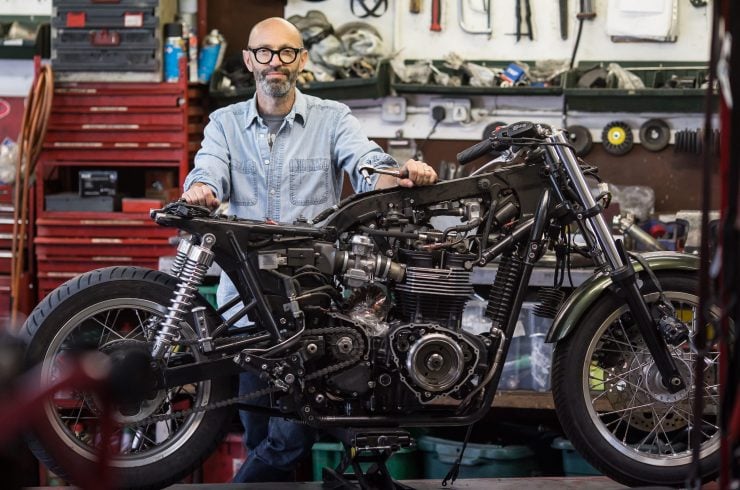