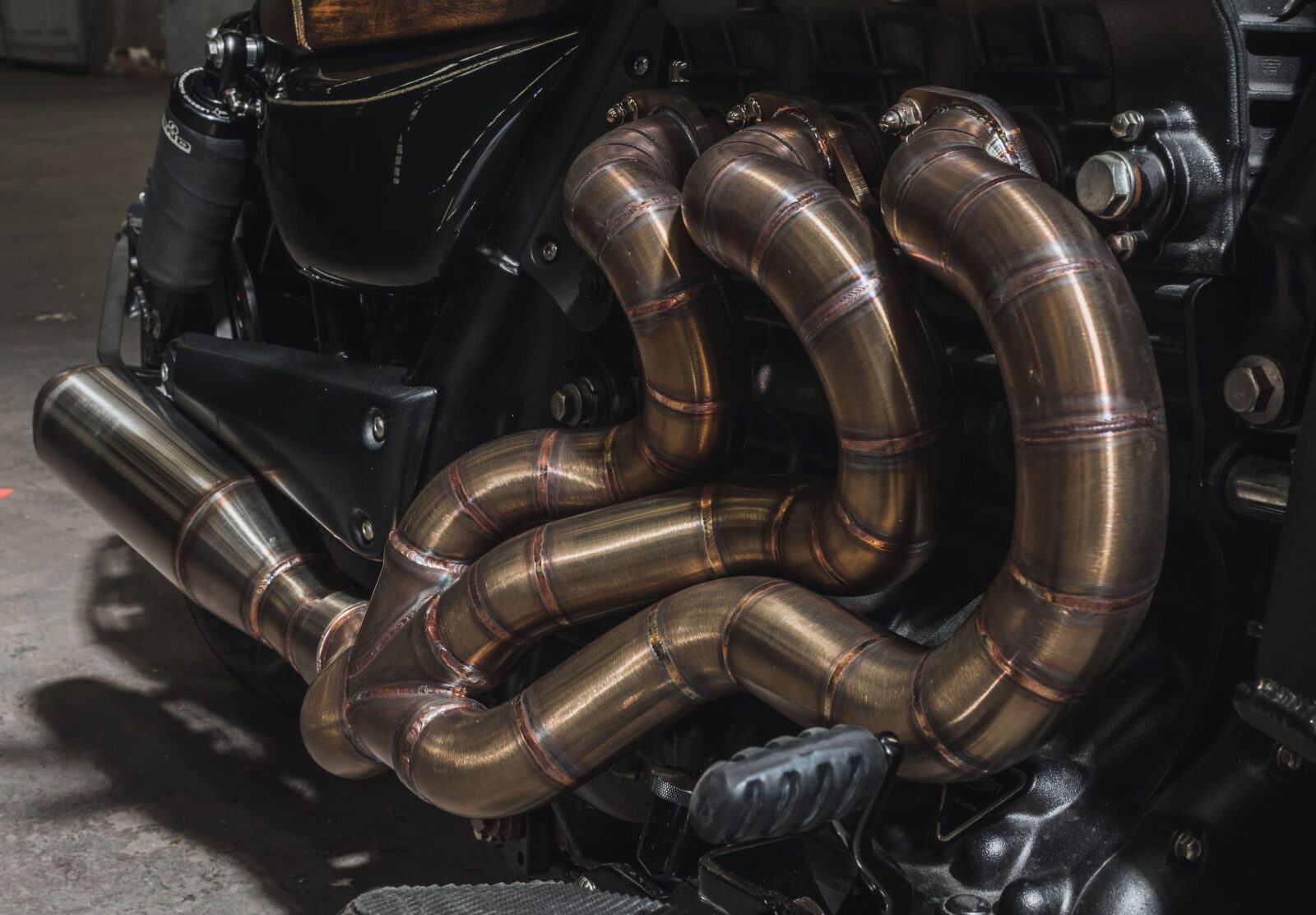 This post was written by the team at Gasoline Motor Co. – One of Australia’s leading custom motorcycle garages first founded in Sydney back in the 1990s.

They say every cloud has a silver lining. The silver lining of this story, comes in the form of a Triumph Rocket III Custom Bobber. After a terrible car accident, years of recovery, ongoing chronic pain, and a lump of compensation money – Leanne decided that although her mobility was jeopardised, her life didn’t need to be. The sensible decision was to invest the money in stocks or real estate, but Leanne – nicknamed Chalky, and her husband Bouncer, chose an entirely different direction.

With British roots and bloodline, the pair drew inspiration from the motorcycles of Brough Superior. Described as “The Rolls Royce of Motorcycles” Brough Superior ended production with the outbreak of World War II in 1939. Back in its day, the Brough Superior SS80 was nicknamed the ‘Black Bess’ – after notorious highwayman, Dick Turpin and his powerful iron horse, Black Bess. Bouncer and Chalky wanted to capture the glory of the rogue lifestyle with a custom Rocket III – a motorcycle with the largest engine displacement on the market.

Enter Gasoline Motor Co. who jumped at the challenge to take a large, bulky 350kg 2300cc two-wheel rolling torque beast and turn her into a swift but powerful iron horse. A fast and unstoppable mare – the ‘silver’ lining of the car accident that had urged them to live and adventure more. 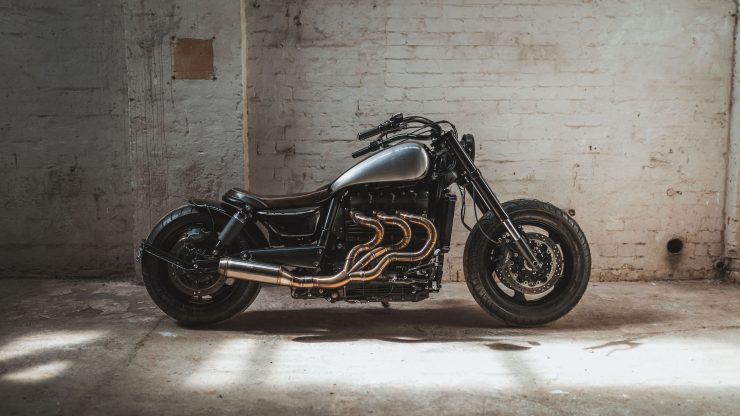 The team, Jason Leppa, Sean Taylor and Kevin Warchewski, who were yet to see a heavily customised Triumph Rocket III, were stoked with the opportunity to create something fresh. Having nothing to refer to, allowed for the build freedom every bike builder needs to push creativity. A major subframe reconstruction housed a Legend Air ride shock system and included a 2-inch rear hoop system. A triple clamp kept the original Rocket III OEM front end with some well needed steering stop tweaks to accomodate for a hefty new tank.

The hand fabricated tank was an extended, widened and a low slung version using the original under carriage, finished in a raw steel and gloss black. Gold feature lines accentuated the shape, with front and rear fenders which were english wheel-rolled and supported with custom struts.

Up top, Berringer hand controls with switch blocks and metal handle grips by Motogadget made the perfect reins. Beach bar style custom handlebars flowed with the lines of the tank and were internally wired to accomodate the MG motoscope mini. 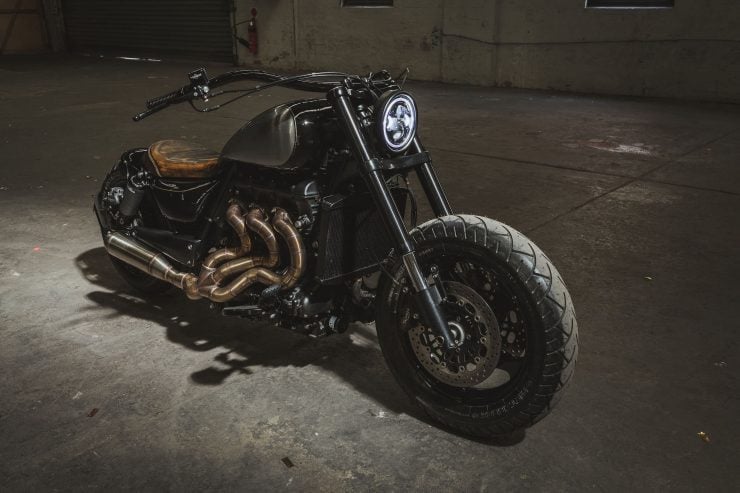 Suspension-wise – Two rear air ride Legend Air Shocks are operated by a cleverly positioned switch which was easily accessible under the tank. A custom smaller neat custom radiator was made to fit.

A true show horse knows how to flaunt its’ mane – an unpredictable 50 piece stainless system was pieced together for an exhaust. Exuding magnificent movement and lightness, the system converts 3 into 1 for maximum performance. Ceramic coated internally radiating less heat externally and allows for a better gas flow.

The final touch was a thick weathered and distressed leather seat, crafted with an etched GMC logo – the colour choice taken from a vintage Brough Superior SS80 photograph. 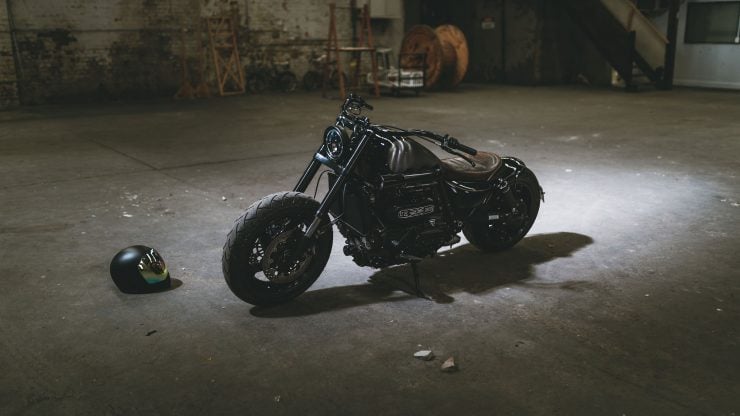 The end result was a stripped back and completely custom machine which was now 180kgs, with a 90kg engine. The undulating lines of the motorcycle made Black Bess look fast, even when stationary. Bouncer and Chalky were summoned for the grand reveal… She was awestruck and he expressed his joy with many a ‘colourful’ phrase. Mostly though, they just sat in silence and gazed at her from every angle.

This reaction, is one of the reasons why Gasoline Motor Co. builds motorcycles that are more than lethal weapons. To envision a life better lived. Bouncer and Chalky are forever grateful to the boys at Gasoline Motor Co., for capturing the spirit of Black Bess.

A special thanks to Rob Hamilton for the incredible photography. Thanks to Commune Sydney for the industrial location to shoot. 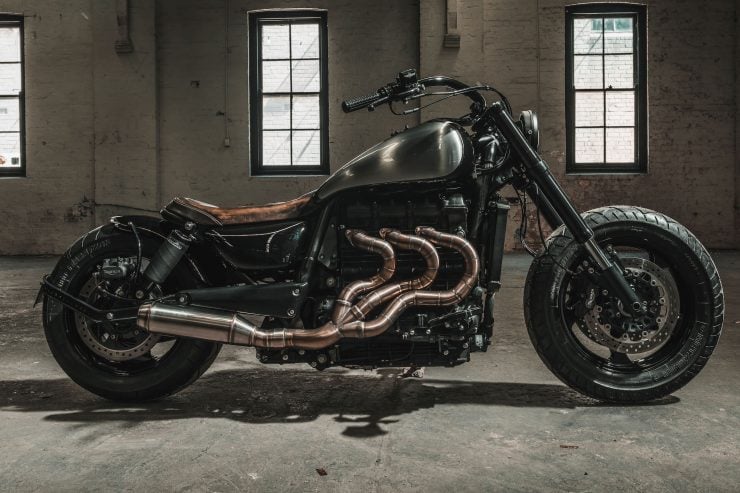 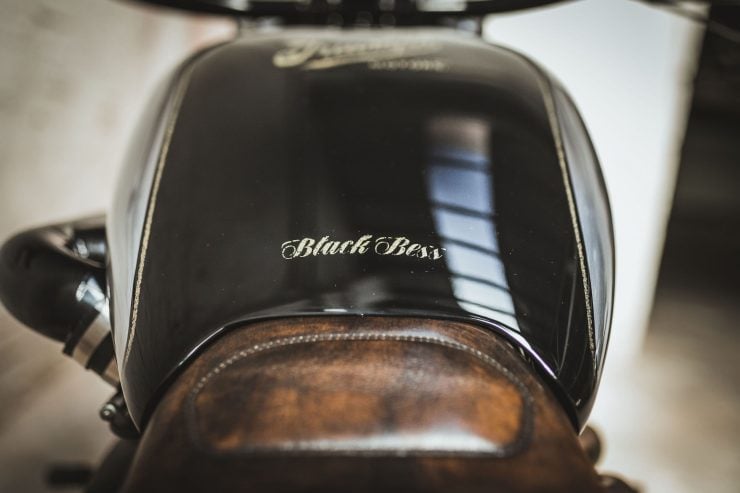 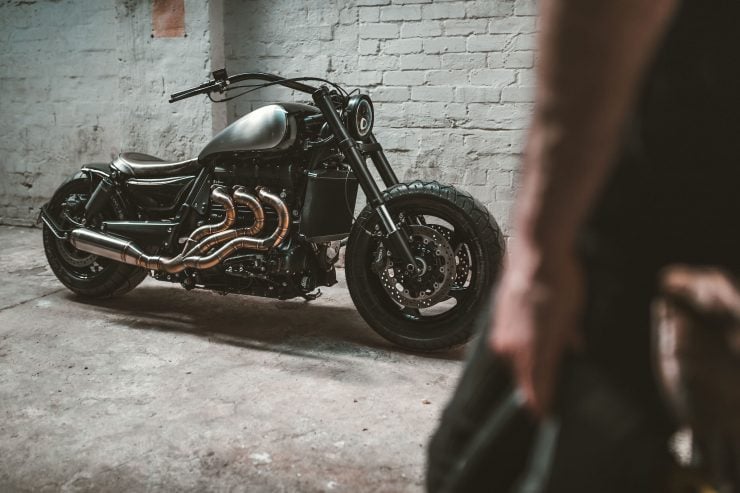 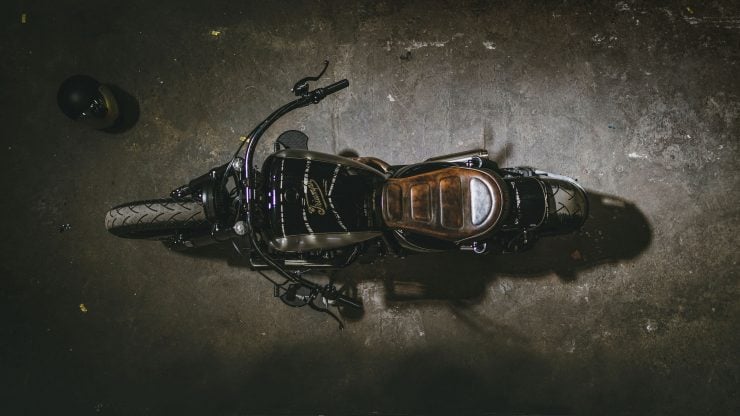 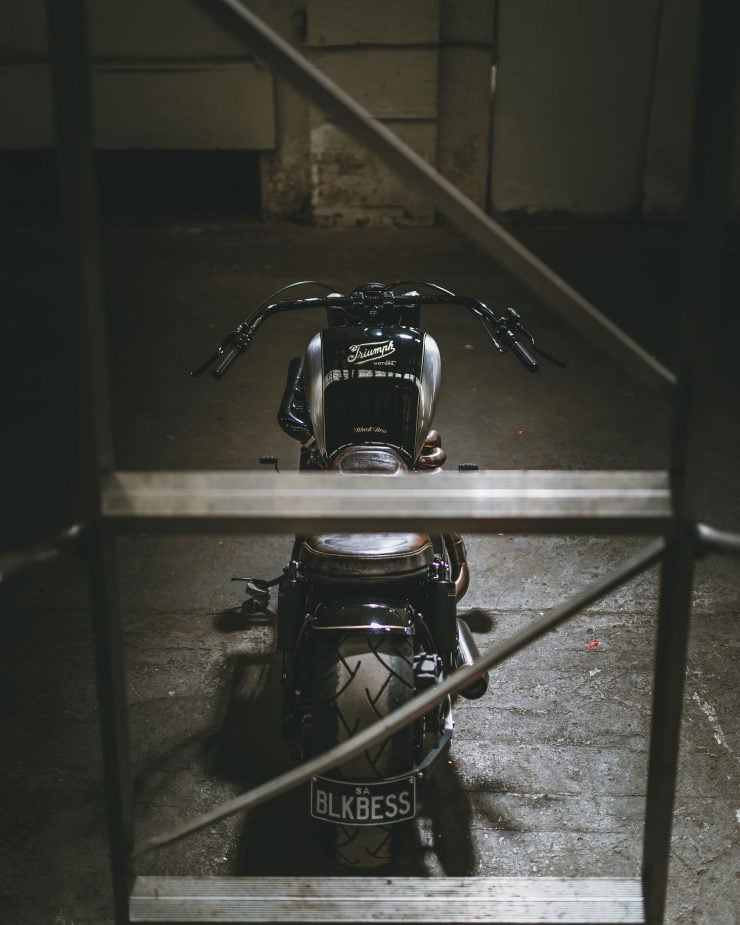 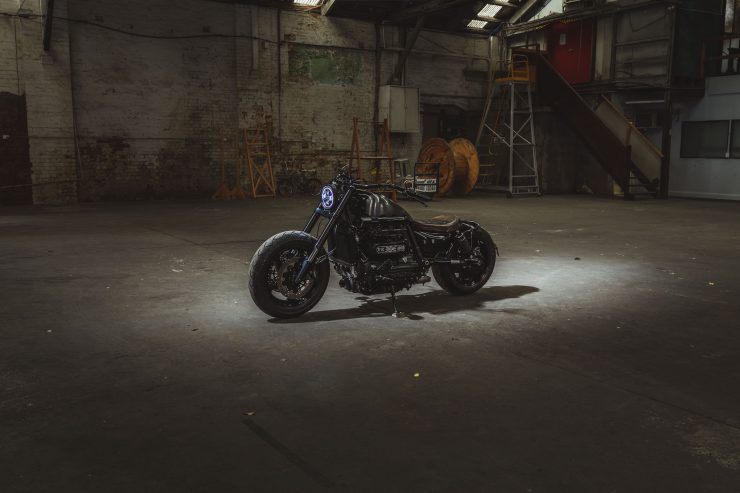 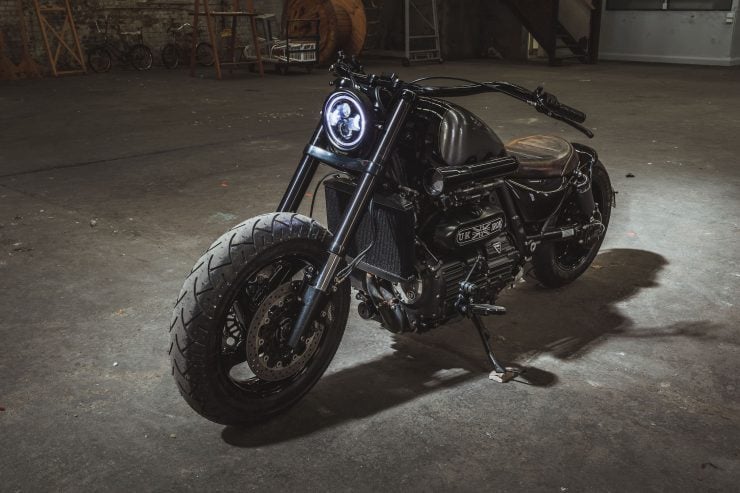 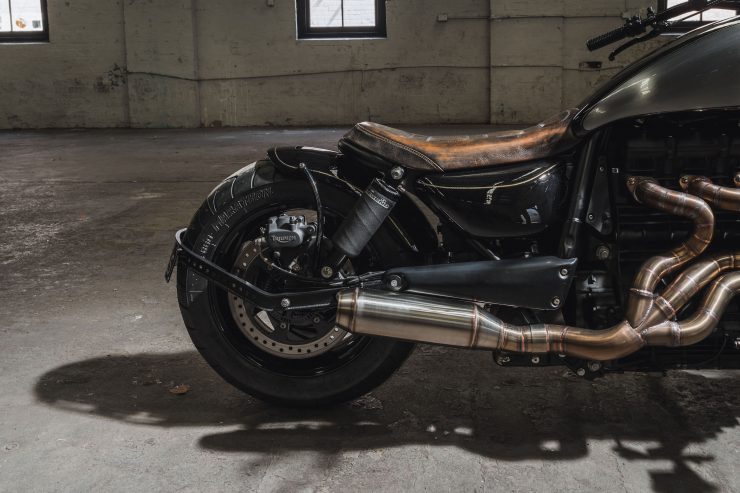 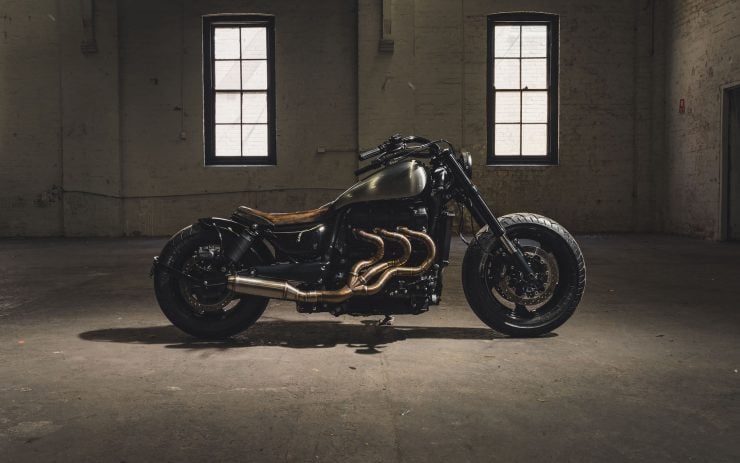 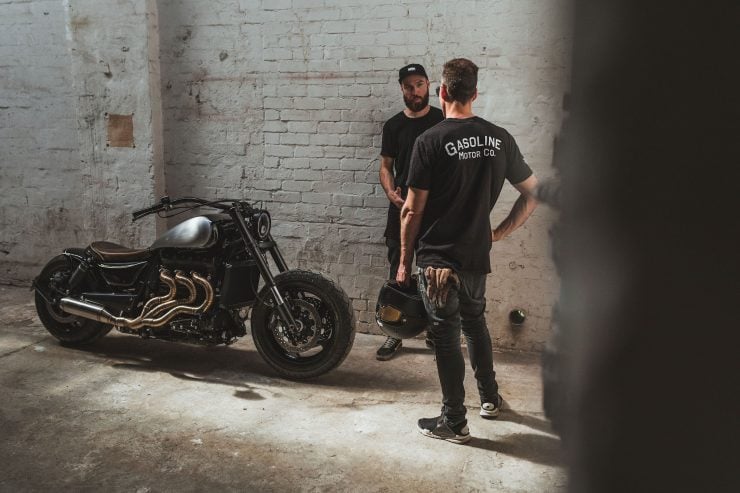