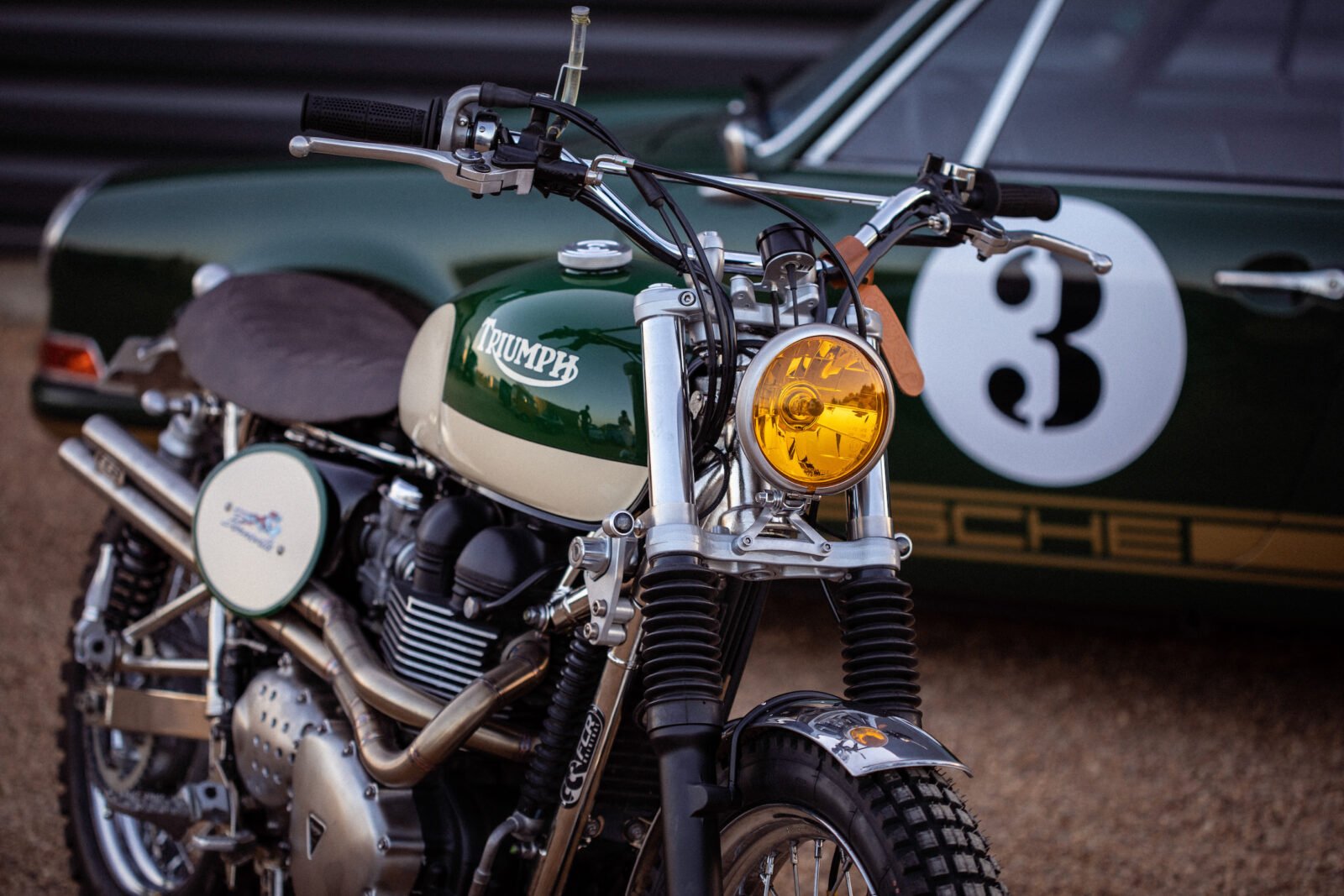 This is the new Triumph Bonneville Scrambler named “Classic Legend” by the team at French custom motorcycle garage FCR Original. They’ve comprehensively rebuilt it into a 1960s-style desert sled in the spirit of the off-road motorcycles ridden by the likes of Steve McQueen, Bud Ekins, Malcolm Smith, and many others during the sport’s golden age.

Before the rise of two-stroke enduro bikes, British four-stroke parallel twins dominated much of the California desert racing scene.

The bikes were little modified from their street specification, usually some unneeded parts were removed for weight loss and knobby tires were fitted. Fearless riders used to achieve eye-watering speeds on these bikes across rough terrain on stock suspension.

The arrival of two-strokes by Swedish manufacturer Husqvarna in the late 1960s would spell the end of the British desert sled, but now 60 years later these roaring parallel twins have been making a comeback.

The build process for this bike started with a stock 2015 Triumph Bonneville, this is a model that has proven popular with custom motorcycle builders since its release in 2001. Triumph kept this version of the Bonneville in production for 15 years before releasing a newer version – a testament to the model’s enduring popularity. 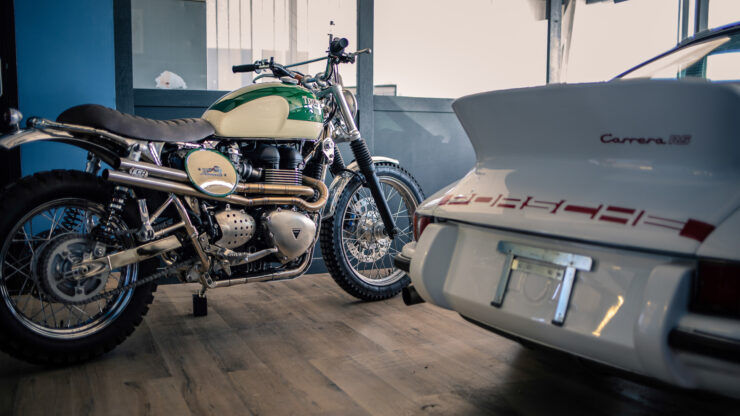 Above Image: The new dual straight exhaust pipes sound fantastic, and there’s an leg protector added to save the rider’s thighs.

From the factory the 2015 Triumph Bonneville is fitted with an 865cc DOHC parallel twin and a 5-speed transmission with a chain drive to the rear wheel. The engine has stood the test of time with some now running into the six digits on their odometers with no major rebuilds.

The 865 Bonneville’s architecture is deeply traditional, with twin shock absorbers and a steel swing arm in the rear, telescopic forks up front, and a duplex steel tube cradle frame to hold it all together. The upside of this is that customizing and rebuilding the Bonneville is relatively straightforward, and due to the high production numbers of the model there is excellent aftermarket support and parts availability.

The process of rebuilding the 2015 Bonneville you see here started with a full disassembly. The steel tube frame was stripped of paint and sent away for nickel plating to give it a look reminiscent of the Rickman Metisse.

New braced handlebars were fitted along with a new smaller motogadget speedometer and a smaller yellow-tinted headlight. The factory exhaust system was removed and a new FCR exhaust was added, this set of straight pipes required a ECU reprogramming to increase power, made possible by the freer flowing exhaust gasses.

A leg protector was added to the right-hand side of the bike to keep the rider from burning their leg on a regular basis. New motocross-style FCR foot pegs were fitted and smaller, more vintage-looking blinkers were added front and back along with a smaller brake light in the rear. 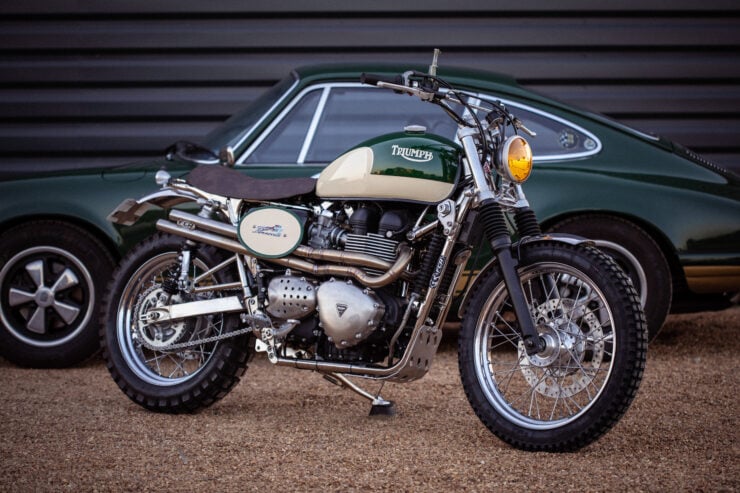 Above Image: Although still street friendly, the Bonneville has knobby tires, a bash plate under the sump, and 20mm off additional ground clearance.

A new set of alloy fenders were shaped up by the team at FCR, these cover new dual sport tires with Heindenau rubber up front and Continental rubber in the back. The front suspension was kept in place and a pair of fully-adjustable shocks were added in the rear, these give the bike an additional 20+mm of ground clearance.

A new seat was fabricated in-house and upholstered with nubuck leather, the original fuel tank was repainted with an attractive two-tone English green and ivory color scheme that was chosen to match the new owner’s Porsche 911T.

The completed bike looks a lot like the desert sleds of the 1960s, with the added benefit of modern reliability and notably more oil-tight engines.

If you’d like to see more from FCR Original or enquire about getting them to build you a bike you can click here to visit their website. 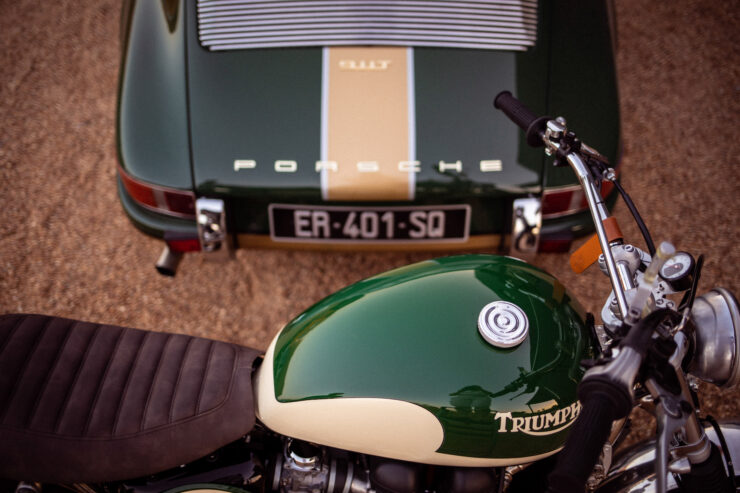 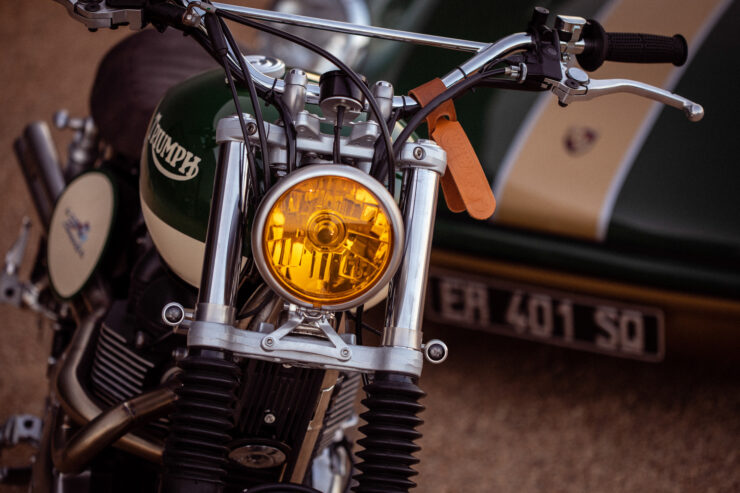 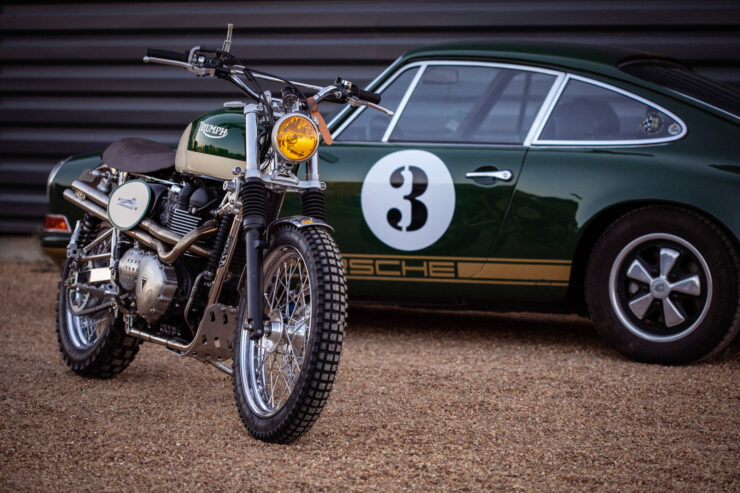 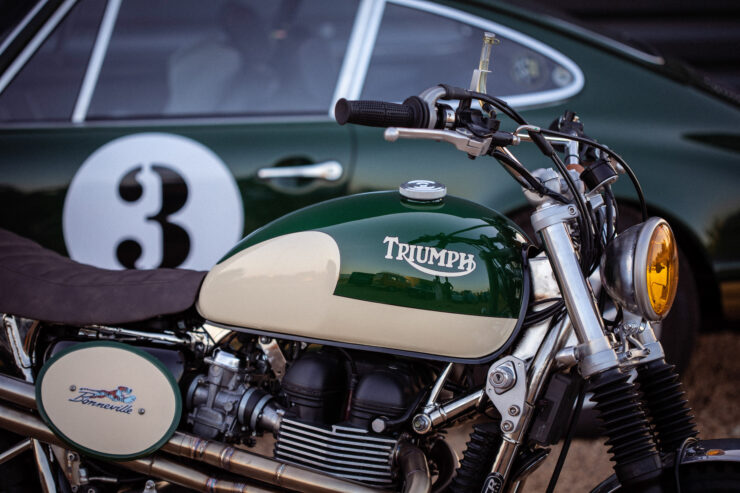 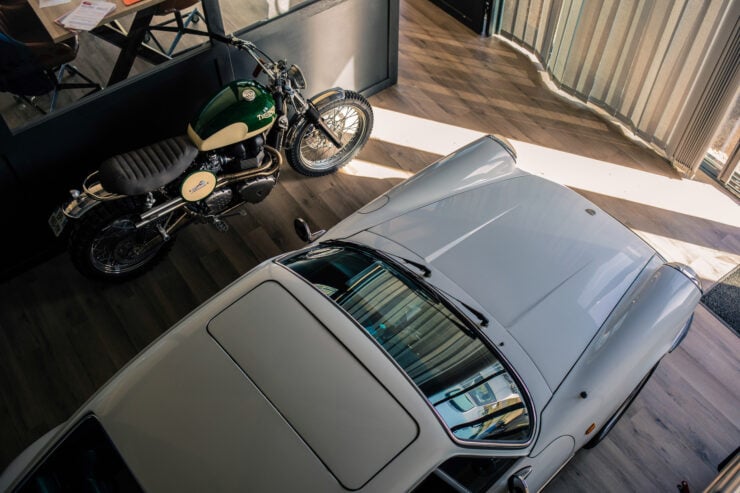 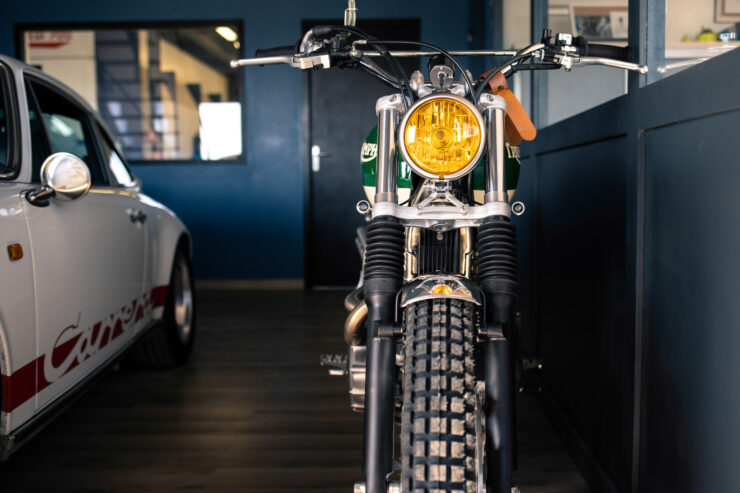 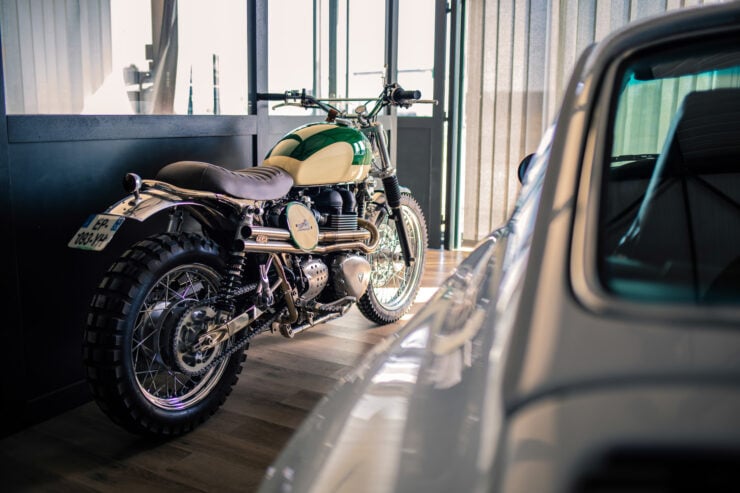 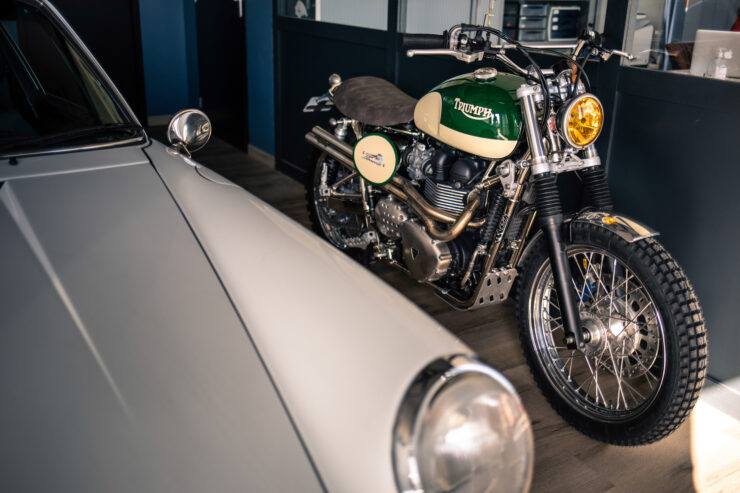 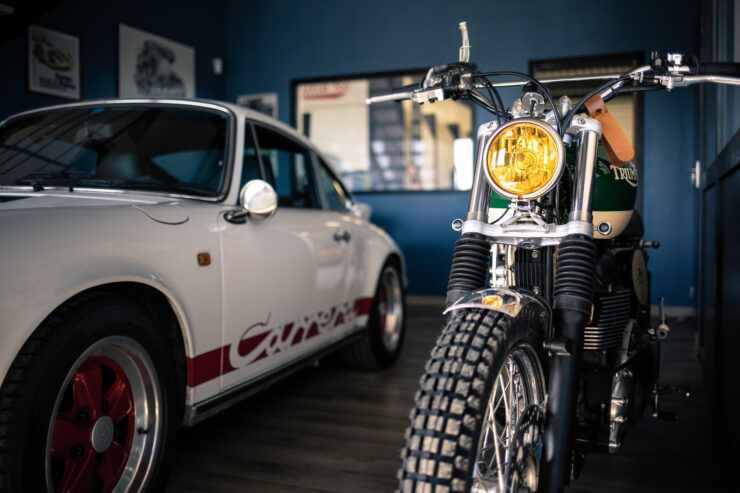 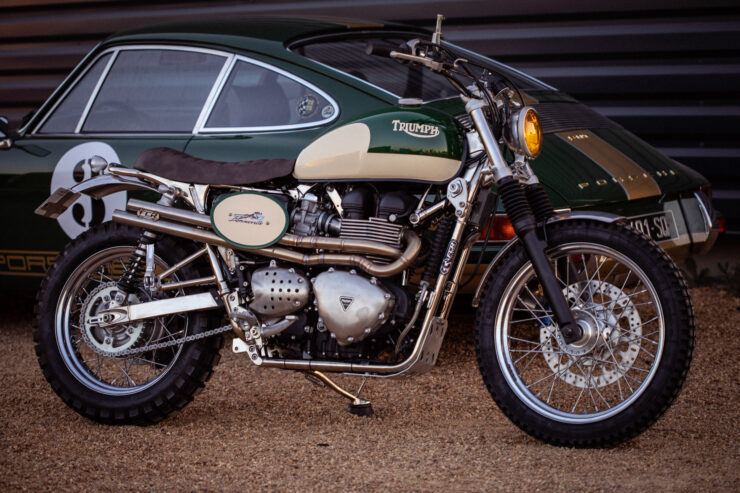 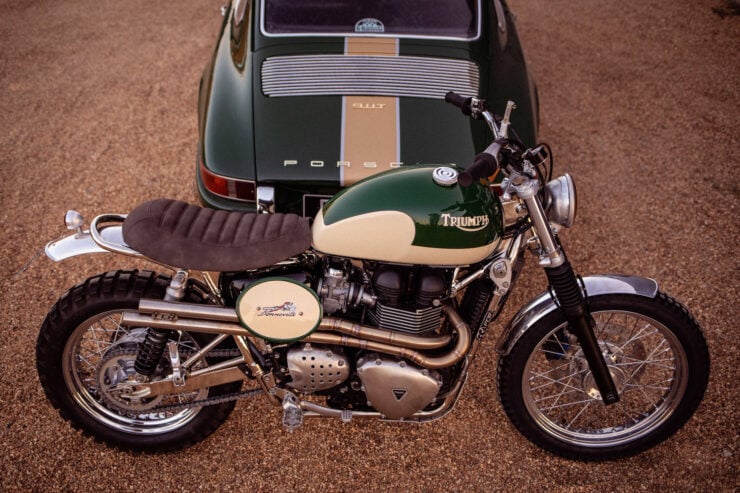